It is not too often at Fratello that we dive into the world of Japanese anime. However, it is a phenomenon that attracts many fans and enthusiasts worldwide. In partnership with Studio Ghibli, Seiko honors one of the most legendary animated movies ever made. Seiko honors the 1992 animated film Porco Rosso with a set of two limited edition watches. Both watches bring the story of Porco Rosso to life perfectly and are therefore pieces for the real collectors. In the first of two reviews, we go hands-on with the Seiko Presage SNR047 “Porco Rosso”.

We have already seen quite a few good releases from Seiko in 2020. The number of watches the brand has shared is impressive. A large number of those watches are additions to the permanent collection of the brand. On top of that, we also see quite a few Seiko special releases every year. A recent example is the much-discussed Seiko SRPE83K1, made in collaboration with Brian May.

If you are a fan of Brian May, you will probably love it. If you are not a fan, it is mainly a color and shape exercise that might feel a bit strange. Whatever it is, the fact remains that these types of limited editions are not created for everyone. Therefore you don’t have to like them. The same goes for the new Seiko Presage Studio Ghibli Porco Rosso Collaboration Limited Editions. They are specially created limited editions for fans of Porco Rosso. 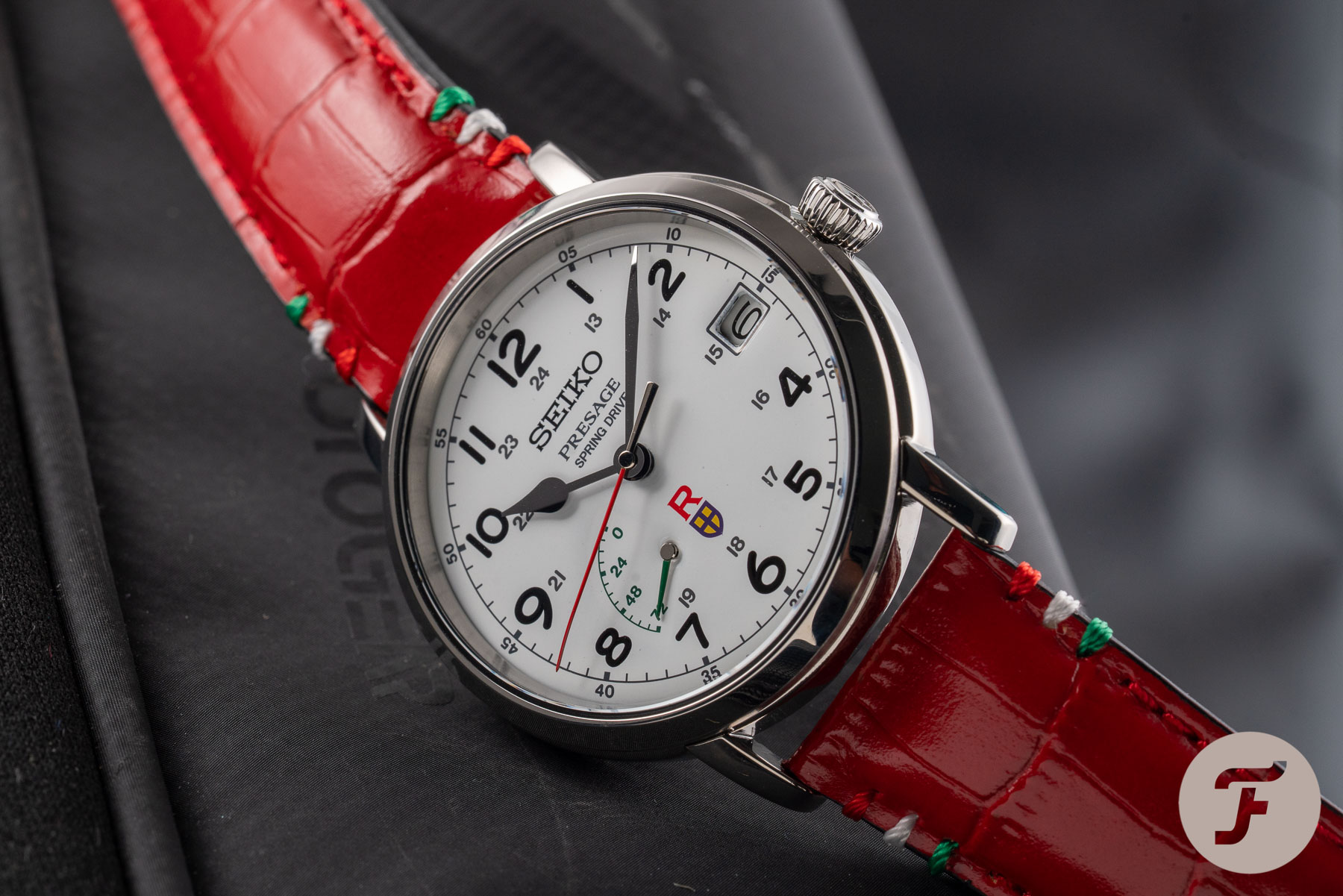 These all-new Seiko Presage watches are created in honor of the animated film Porco Rosso by Studio Ghibli. In 1985 directors Hayao Miyazaki and Isao Takahata and producer Toshio Suzuki founded Studio Ghibli. The studio quickly grew into one of the leading animation film studios in Japan. And within the world of animated movies, the studio has gained legendary status over the years.

Porco Rosso is one of Miyazaki’s earlier films. It was first released back in 1992 and over the years has reached iconic status. Seiko teamed up with Studio Ghibli to honor Porco Rosso.  Working together, they found a shared passion for bringing the concept of the film to life. Both Presage watches show that the crafts of making animated films and creating unique watches share the art of storytelling. And Seiko wouldn’t be Seiko if they didn’t add something extra to the story with their craftsmanship. 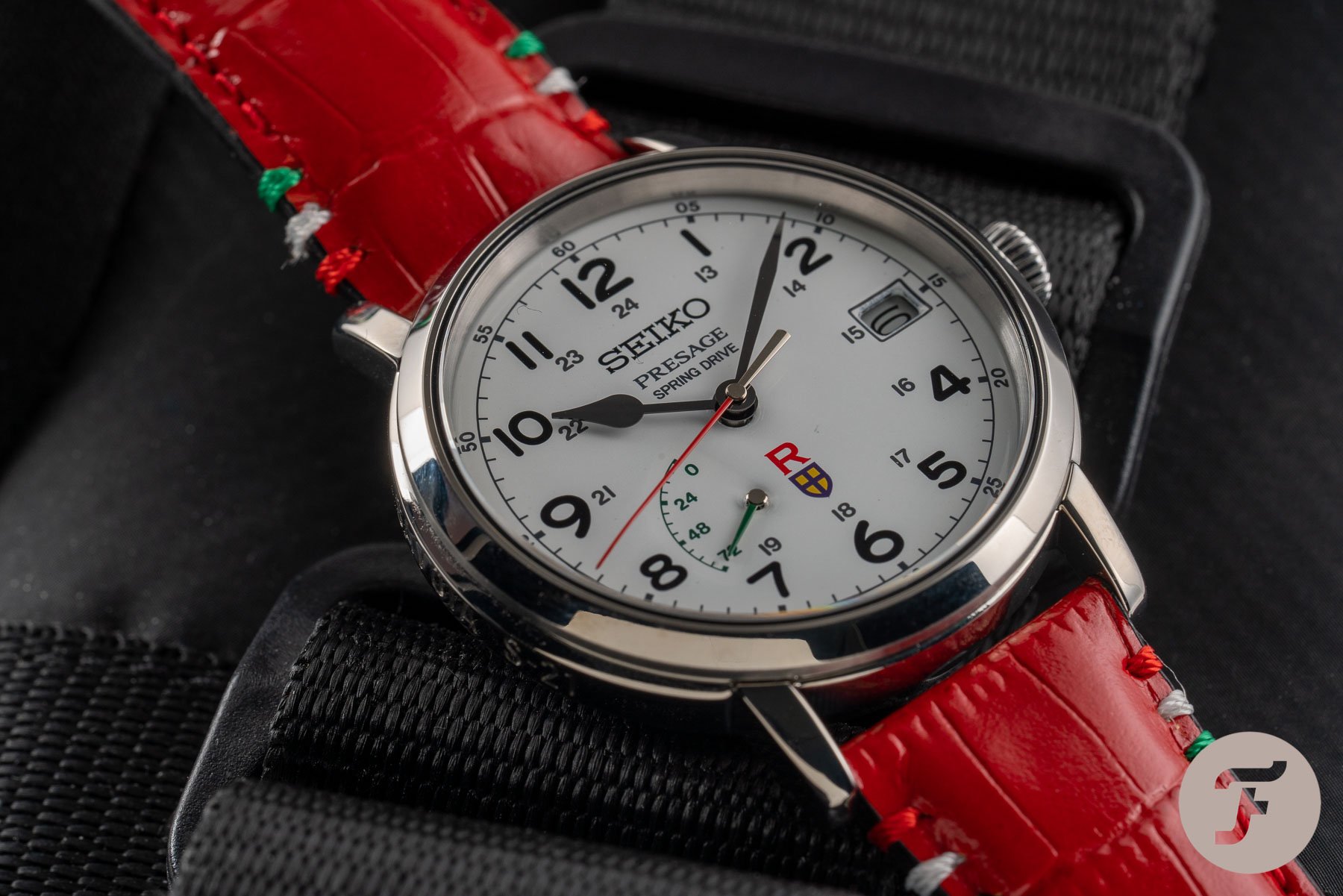 The story of Porco Rosso is a remarkable one. The project started as a collaboration between Studio Ghibli and Japan Airlines. The film was initially planned as a short in-flight film for Japan Airlines. As the project progressed, it grew into a feature-length film. The story of the film revolves around Porco Rosso, an Italian World War I ex-fighter ace. He now lives as a freelance bounty hunter chasing air pirates in the Adriatic Sea. However, an unusual curse has transformed him into a pig. Once called Marco Pagot, he is now known to the world as “Porco Rosso”, Italian for “Red Pig”.

He used a lot of historical figures and planes to bring the Porco Rosso story alive.

I am not the biggest anime fan, but I loved reading about the historical references Miyazaki uses in the movie. He used a lot of historical figures and planes to bring the Porco Rosso story alive. If you decide on doing a bit of research, you will find that some of the animated planes in the film do exist in real life. And some of the characters in the movie are based on famous Italian aviators. It’s great to see that Miyazaki has used this great personal passion for early Italian 1920s aviation as an essential part of his film. 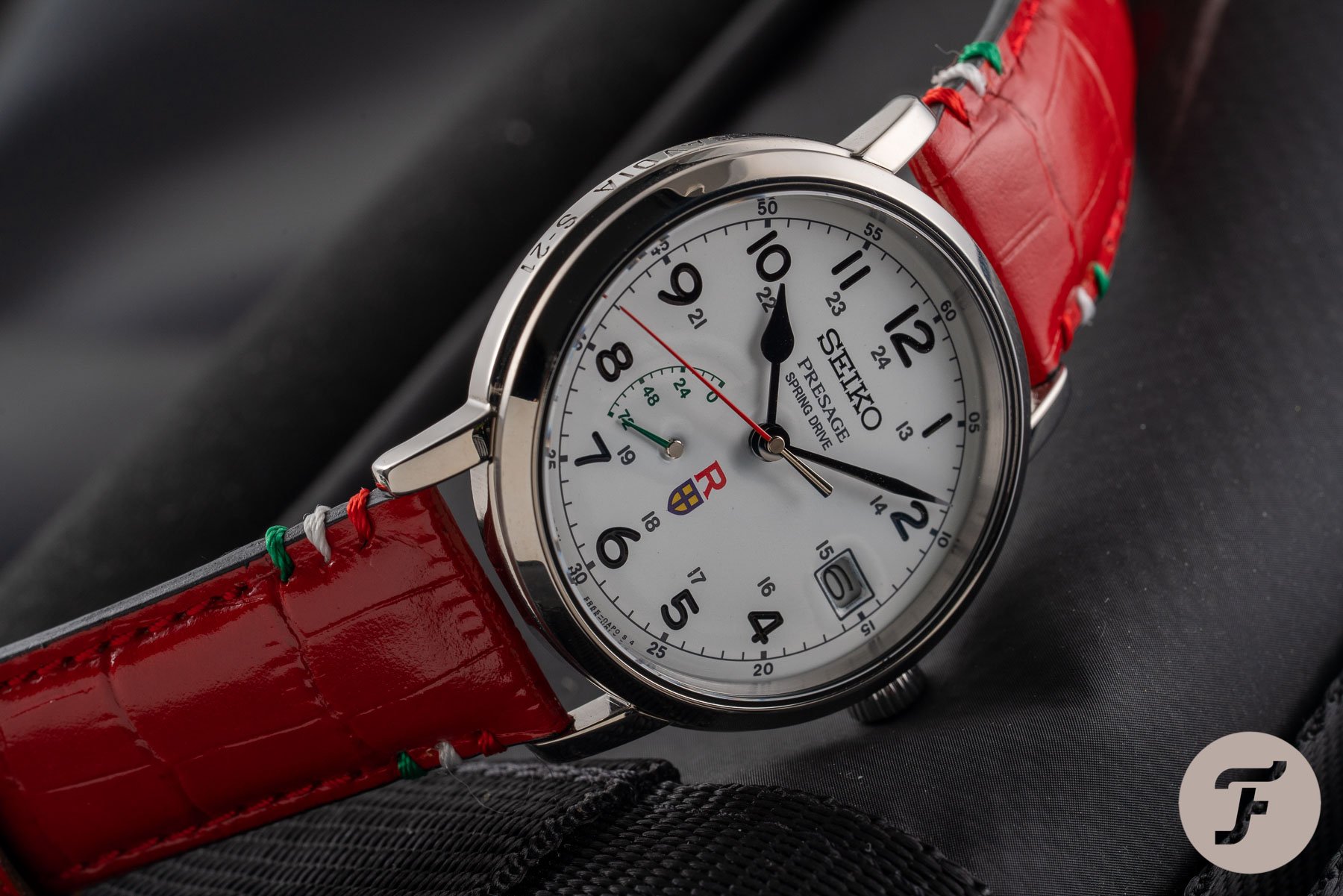 The Presage SNR047 is the perfect representation of that typical 1920s style that is so prevalent in the film. It’s a modern interpretation of the early 20th century pilots’ watches. The stainless steel polished case has a 40mm diameter. It’s a perfect size, and with a thickness of 13.1mm, the SNR047 sits very comfortably on your wrist. For a classically inspired pilot’s watch is not a big watch and I like that about it.

The design of the SNR047 is explicitly based on the cockpit of Porco’s fictitious 1920s plane, the Savoia S-21. And Seiko has used a lot of details of the aircraft for several parts of the watch. For starters, the name is engraved on the side of the watch. Secondly, the dial takes inspiration from the instrument panel by using bright, bold numerals and a clear, bold handset. Another detail is the “R” emblem on the tail of Savoia S-21 is displayed at the six o’clock position. And the crown also features the same “R” as the dial. 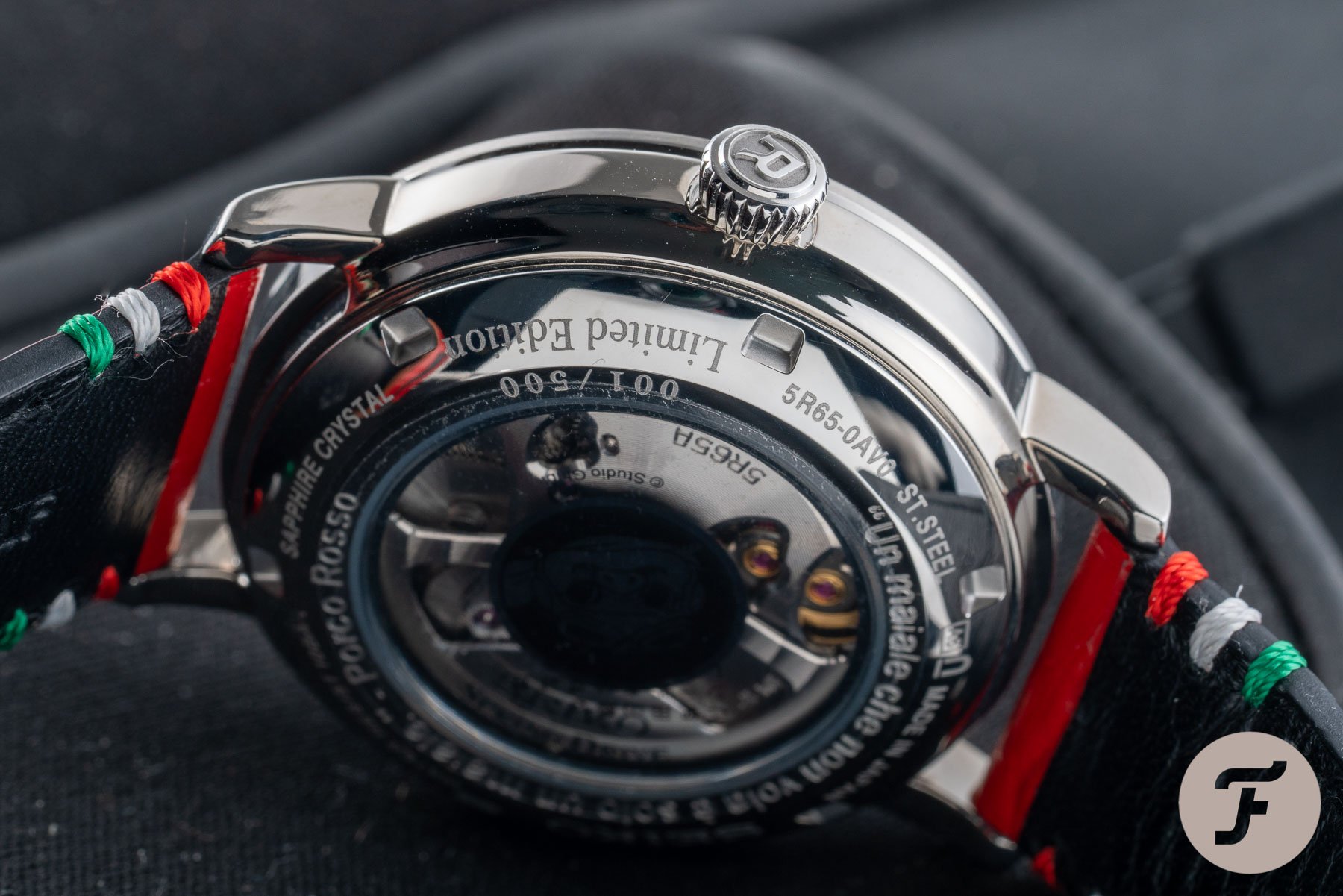 Speaking of the dial, I mentioned that Seiko has used its craftsmanship to strengthen the story of the watch. The white enamel dial created by master craftsman Mitsuru Yokosawa and his colleagues gives the watch a proper vintage feel. Especially the date window is the perfect proof of the craftsmanship with its rounded edges.

Another detail is the Italian Tricolore. You can find the three colors on the dial. The base of the dial is white, there is the red seconds hand, and green power reserve indicator hand. The same colors are used for the stitching on the strap. And the details continue on the back of the watch. 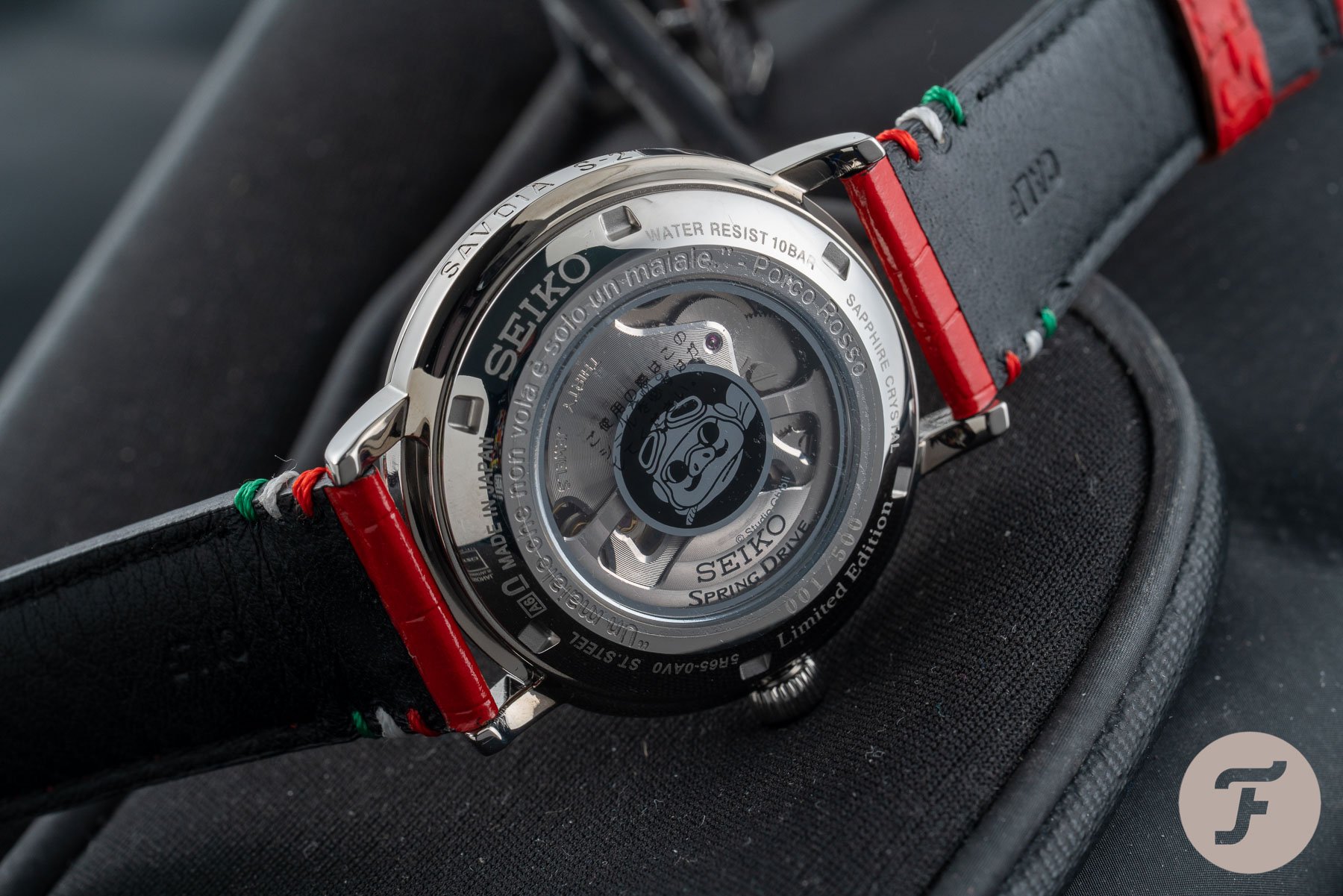 But first, let’s discuss the movement. The back of the watch reveals the Seiko Spring Drive caliber 5R56 through the sapphire crystal case back. It’s a movement that Seiko also used previously in the SBDB008 and SBDB009, also known as the Spring Drive Tunas. And Seiko uses the movement in its Presage series for the SNR037 and SNR039 that were introduced last year. The Spring Drive movement has an accuracy of +/- 1 second per day and has a 72-hour power reserve. You can check the reserve on the power reserve indicator at the 8 o’clock position of the dial. Furthermore, a date feature is positioned at 3 o’clock. 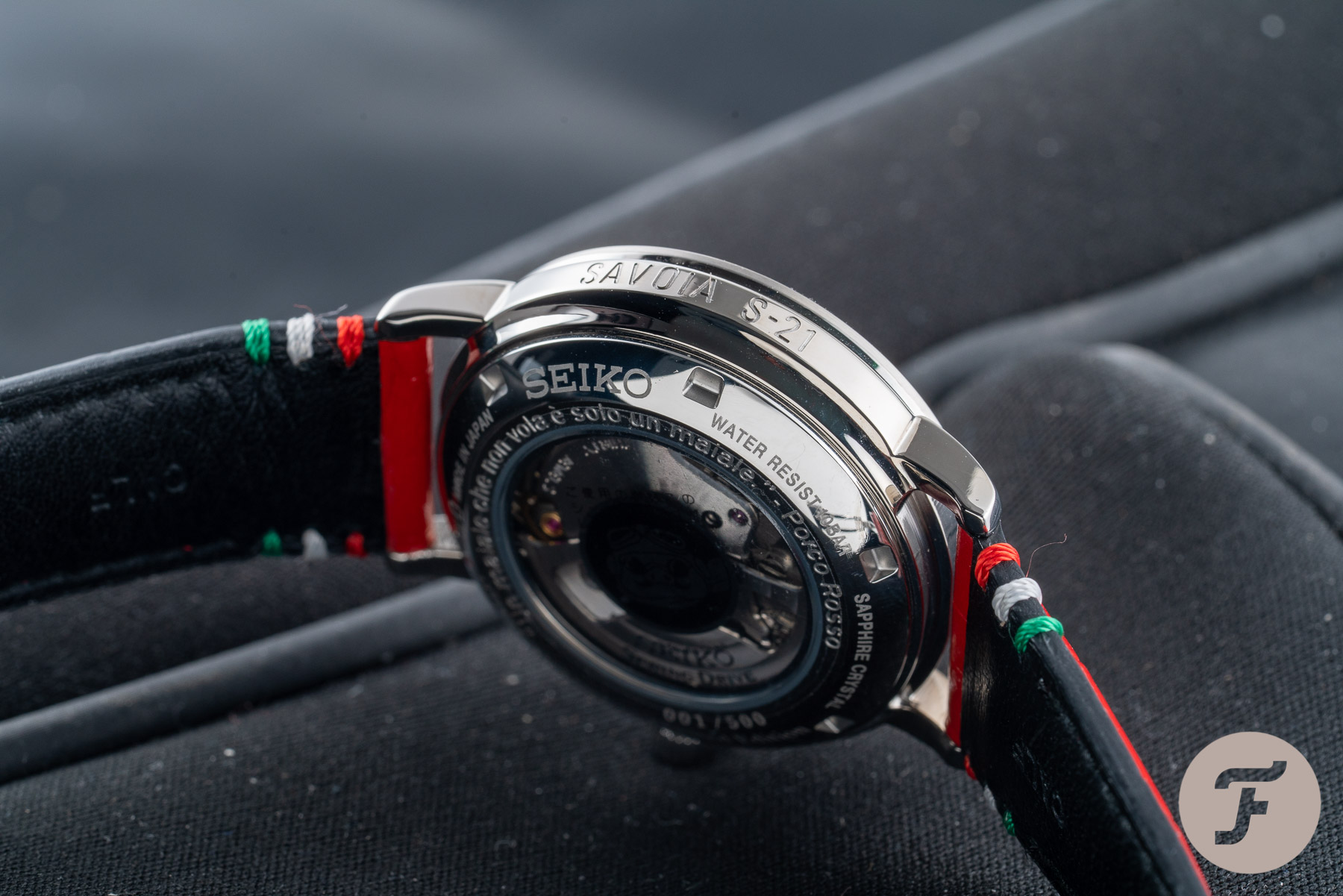 It’s great to see that Seiko uses the technically advanced and super reliable Spring Drive movements for an increasing number of their watches. The movement is partly visible through the sapphire crystal case back. Only partly because the back also features an image of Porco Rosso. Next to that, the famous quote from the film “Un maiale che non vola è solo un maiale,” is engraved on the back. The quote translates into, “A pig that does not fly is just a pig.” It’s one of the many subtle details that make this watch truly a part of the Porco Rosso story. 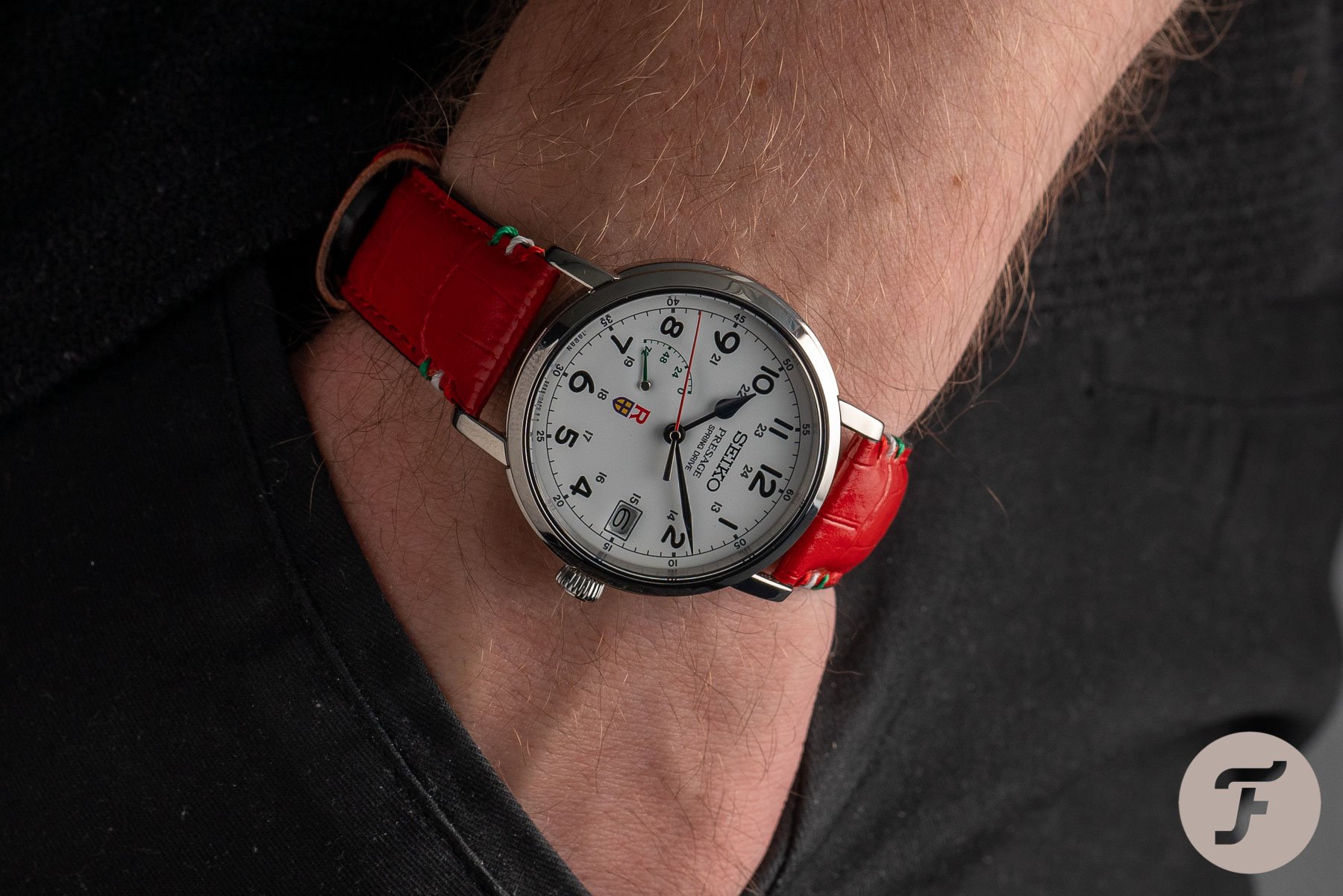 First of all, the watch is hard to miss. It is delivered on a bright red leather strap with a three-fold clasp with push-button release. The color is another reference to the movie. In all honesty, I’m not a fan of the bright red strap, so I had to get used to wearing it. The watch also comes with a second black leather strap, and that would be my preferred option. Although it would be less connected to the story of the movie, it does make it significantly less prominent. And that happens to be more my style.

It fits in with the practical style of a pilots’ watch.

Apart from the strap, Seiko did a great job of creating an aesthetic that fits the 1920s style of the film. Besides that, I love the 40mm size, and the design of the dial makes it easy to read all the necessary info. Even the second set of smaller Arabic 13-24 numerals do not distort the view of the regular 12-hour scale and the outer seconds track. The one thing that is a constant reminder of the modern-day technique is the power reserve indicator. Although I am usually not a fan of power reserve indicators on any Spring Drive model, here it doesn’t bother me as much. It fits in with the practical style of a pilots’ watch. 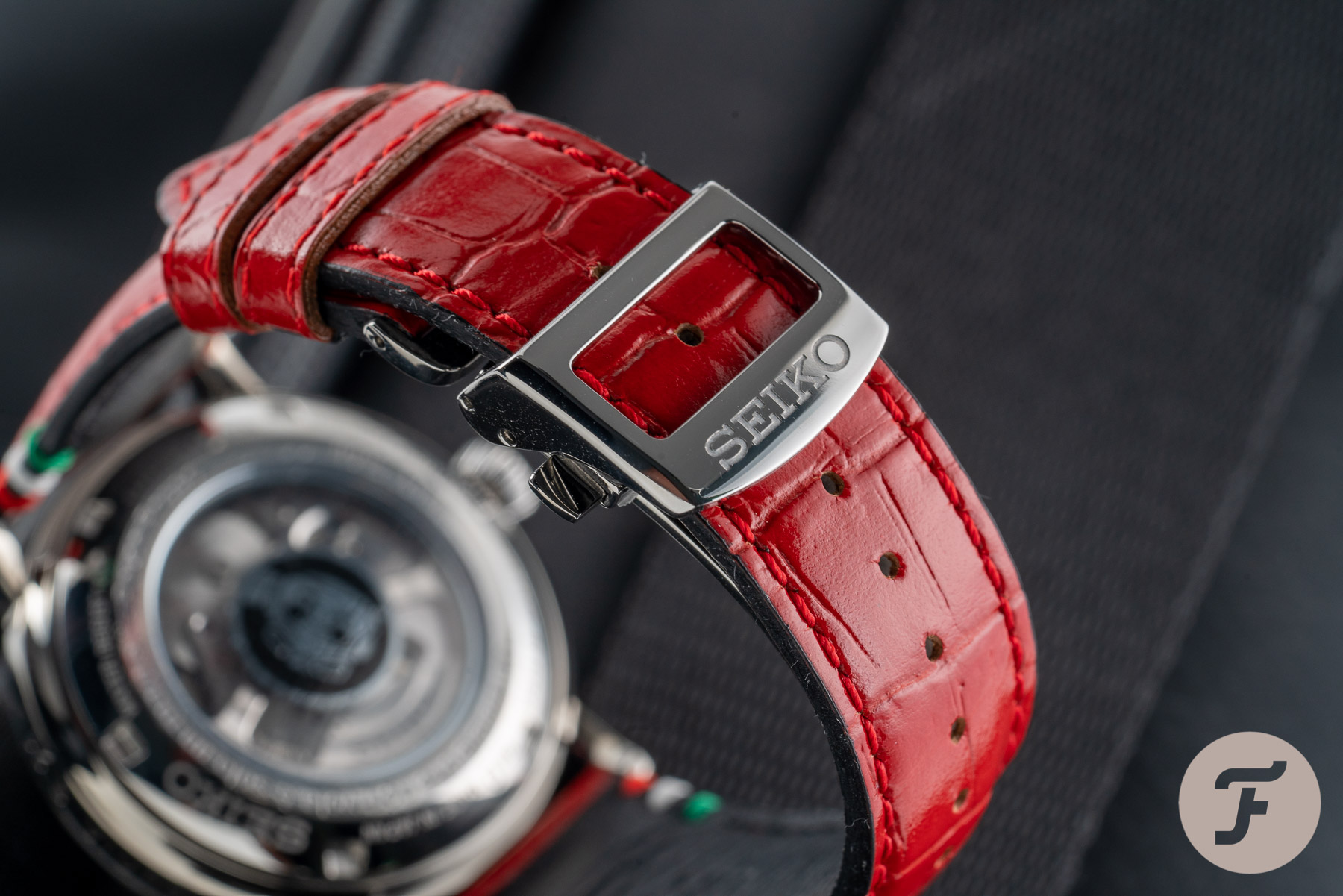 After wearing the watch for some time, I can honestly say it is not for me. There are two ways to connect to this piece, and neither resonates with me personally. The first is the styling of the watch. If you are a fan of classically styled watches brought to life with modern-day techniques, this could be an option. I have to say, the overall design is well done, and the movement is excellent. But it’s just not something I’m drawn to.

…this truly is a piece for the hardcore Porco Rosso fan.

The second way is that you love the story of the watch. If you are a fan of Porco Rosso, this watch will undoubtedly appeal to you more than to an absolute Anime no-no like myself. The concept and execution of all the details linking to the film are well done. But with a steep €5,800 price tag, this truly is a piece for the hardcore Porco Rosso fan. Is there something wrong with that? Absolutely not.

In the end, this is intended as a collector’s piece, and we should see for what it is. The production is limited to 500 pieces worldwide, and I have no doubts that with the legendary status of both Studio Ghibli and Porco Rosso, they will find their way to collectors when they will be available starting June 2020, so as of right now. For more information, visit the official Seiko website here.