Would you spring into action for this Spring Drive for €2,176?
Michael Stockton
comments 16
Share
Wrist Game
Crying Shame

Welcome back to another installment of Wrist Game or Crying Shame. This week, we take on the audacious Seiko SBDB015 Landmaster. But first…

Last week, I tried to appeal to your sporting intentions while attempting to throw a little celebrity endorsement your way. Neither offering was enough to send the TAG Heuer Tiger Woods Professional Golf Watch to the next Ryder Cup. The gallery was awfully rude and sent this to a 67% loss in this skins game. If golf isn’t your game, perhaps mountain climbing is more your style. If so, maybe you’ll take a shine to today’s Seiko SBDB015 Landmaster. 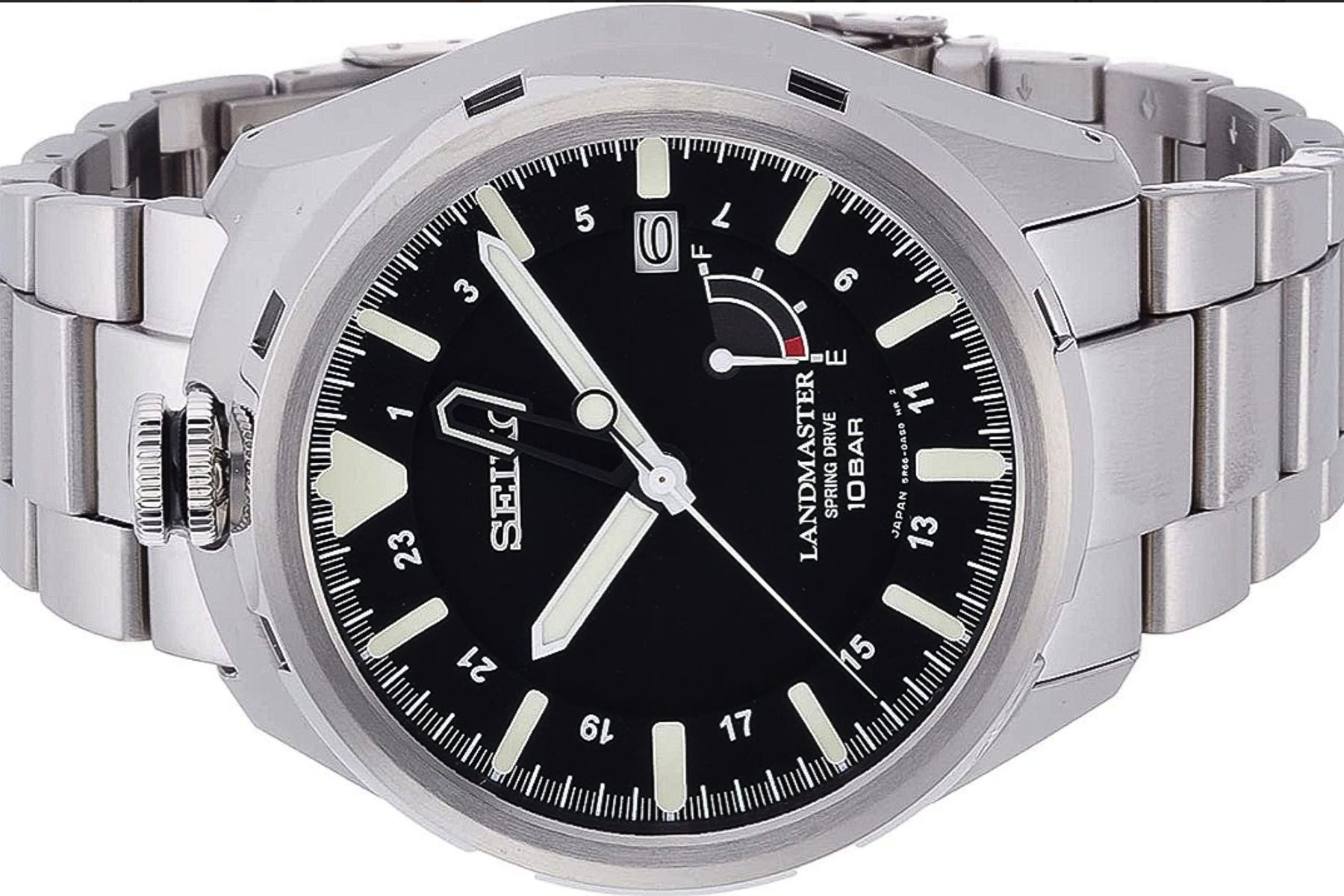 The Seiko SBDB015 Landmaster is a unique-looking watch. This piece first showed itself around 2012 as the SBDB005. It brought with it an incredibly wild bullhead style 46.8mm titanium case with Diashield, the 5R66 Spring Drive with GMT function, and sexy oyster bracelet. The Landmaster was part of the Prospex series and in some ways feels a lot like the Alpinist in purpose.

Regardless of the potential conflict, Seiko kept at it with this 100-meter model. Within a year, a 2013 limited edition black coated piece called the Miura Everest SBDB007 made its way to the market with the same specs. This 300-piece release commemorated the (ultimately) successful summiting of Everest by then 80-year old climber Yuichiro Miura. In 2016, Seiko came with the mildly updated (forum wizards tell us it was simply new lume) SBDB015. 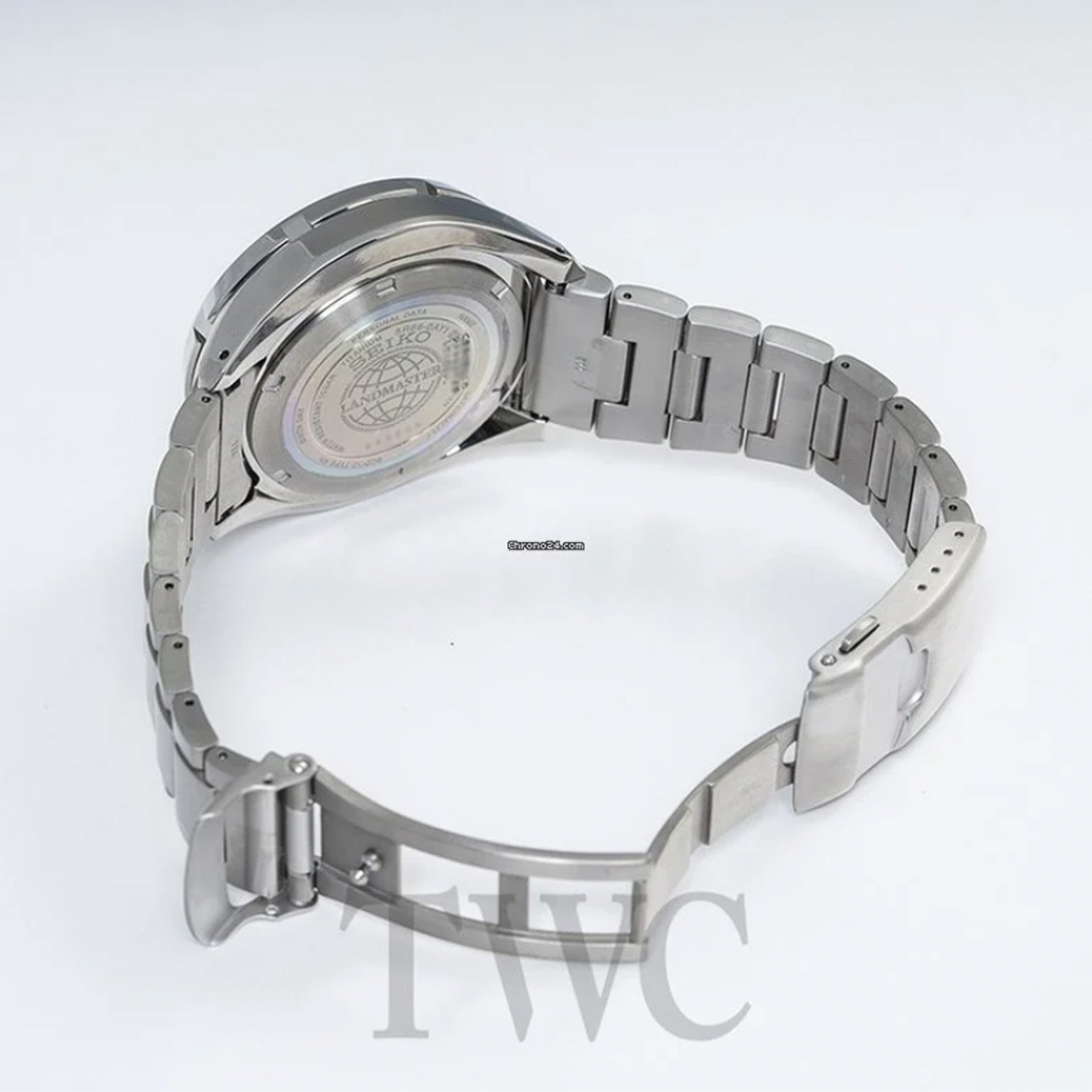 Good for scaling the faces?

The somewhat odd looking Seiko SBDB015 Landmaster was supposedly a decent accompaniment on the faces of Everest for one sole reason. The goofy 12 o’clock crown wouldn’t snag on ropes. I guess that makes sense, but I confess that carabiners, crampons, and pitons aren’t my bailiwick. Seiko lists the thickness at 14.2mm and the bracelet width comes to a beefy 24mm. However, as I mentioned, this Landmaster is made of the light stuff and is only 142 grams with the bracelet.

There are some other specs worth knowing when it comes to the Seiko SBDB015 Landmaster. Firstly, the 5R66 movement is a real peach. It has 72 hours of power reserve and you can watch each one count down on the power reserve indicator at 4:00. It’s also accurate to within +/- 15 seconds per month, so you can summit in time for cocktails. Finally, that funky case I mentioned sports cross-drilled lugs to make strap substitutions a breeze. 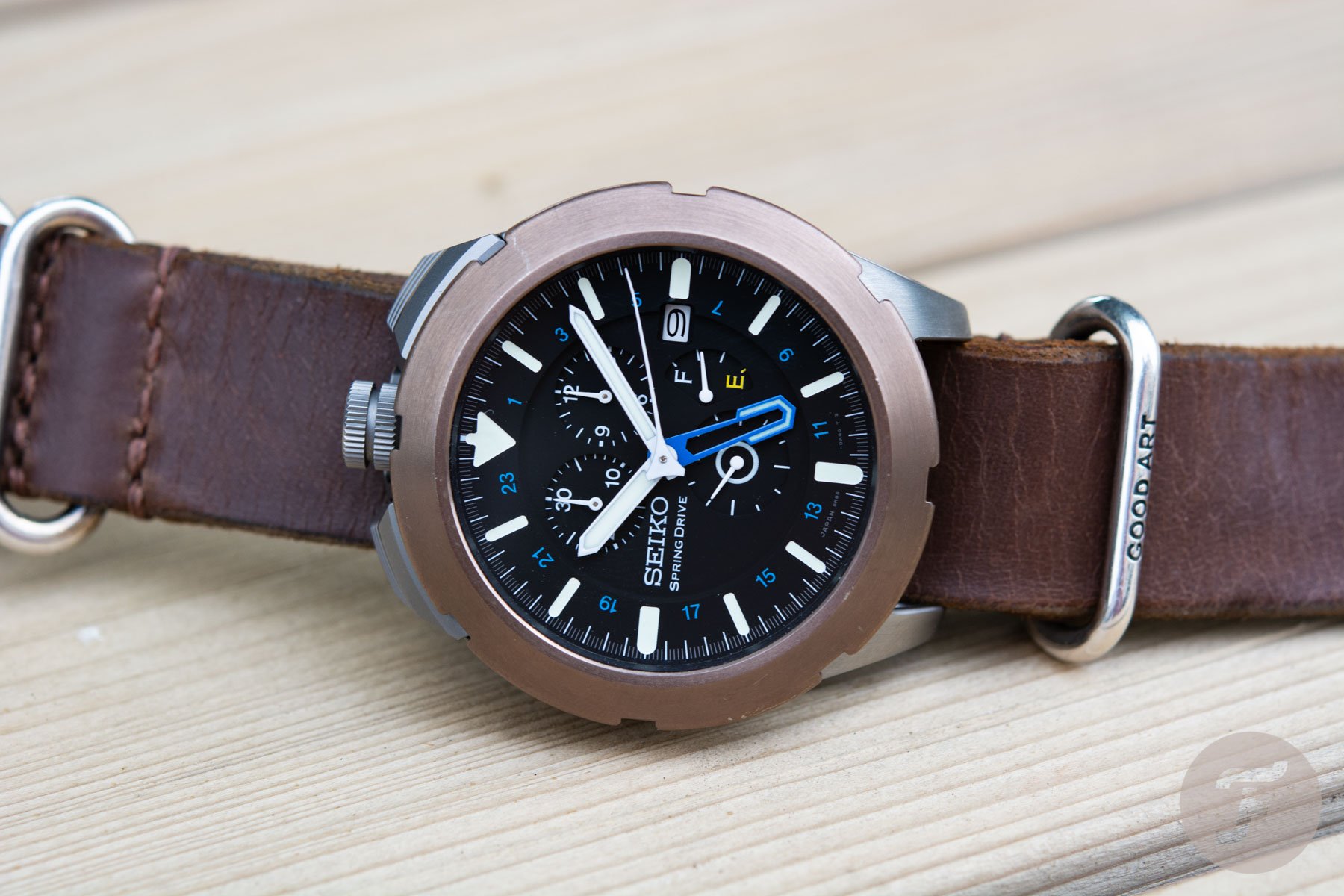 There’s a rather important thing to mention about the Seiko SBDB015 Landmaster and that’s another watch that inspired it. The ultra rare and collectible Seiko Spacewalk SPS005 came out in 2008 and it donated much of its design traits to the Landmaster. Note the same hour markers, 24-hour scale, main hands, and skeletonized GMT hand. They’re virtually identical on the Landmaster. The interesting thing is that the Spacewalk retailed for somewhere around $28,000 whereas this Landmaster retailed for 350,000 JPY (roughly 10% of the price, FX traders). Yes, the Spacewalk was a far more complex model, but this Landmaster was nothing to sniff at. 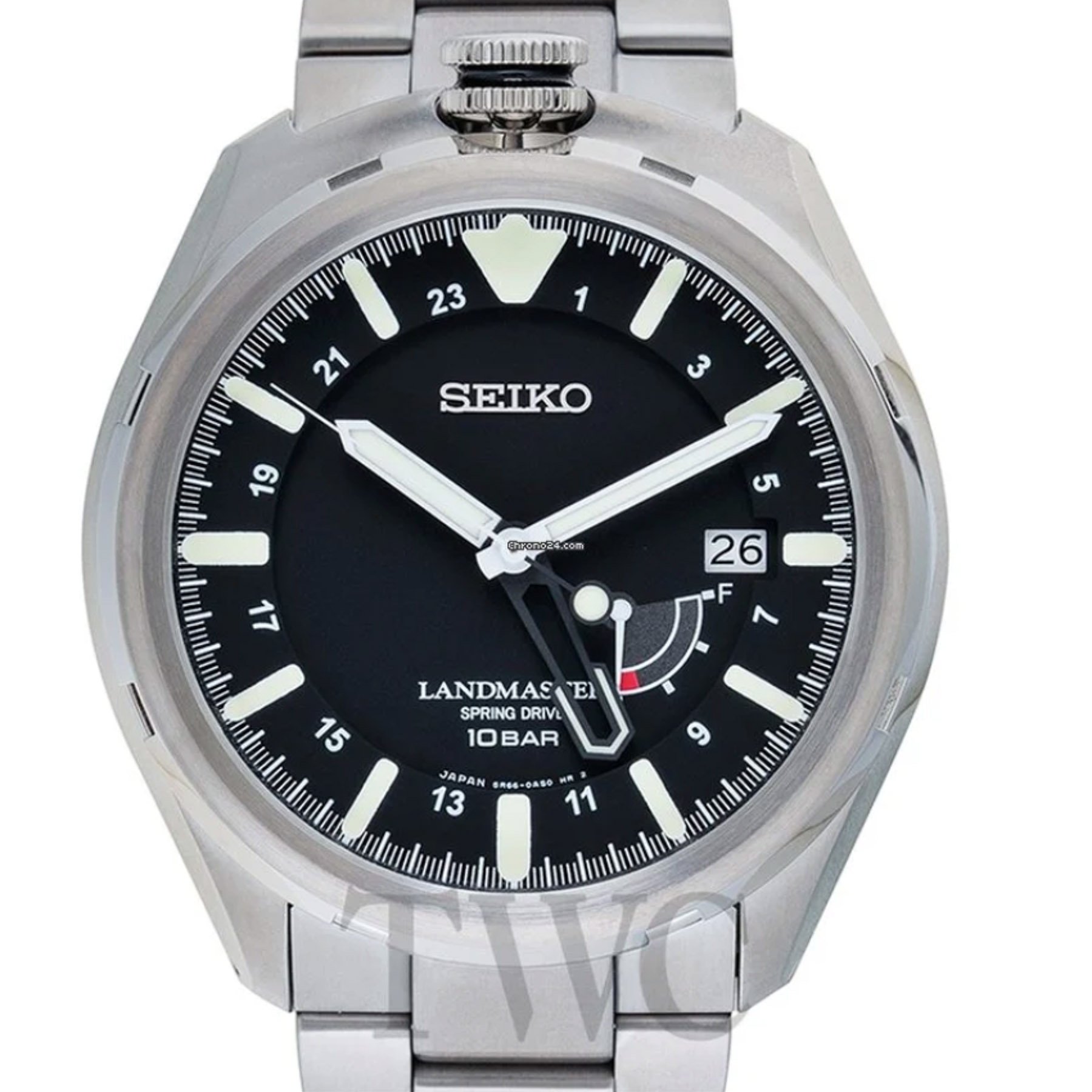 A great entry-point for Spring Drive

Due to its relatively low list price and even lower street price in Japan, the Seiko SBDB015 Landmaster appealed to those who wanted to try Spring Drive on the relative cheap. I even have a friend in Japan who went down this road and it was because of him that I was able to spend time with this watch. I must say, it’s a watch that I truly enjoyed and have thought about buying many times. Sadly, these watches were quietly discontinued in 2019 or so because their polarizing looks were just a bit too shocking. In my view, this is a real pity because it was one of the brand’s truly unique watches that used a bespoke exotic material case. 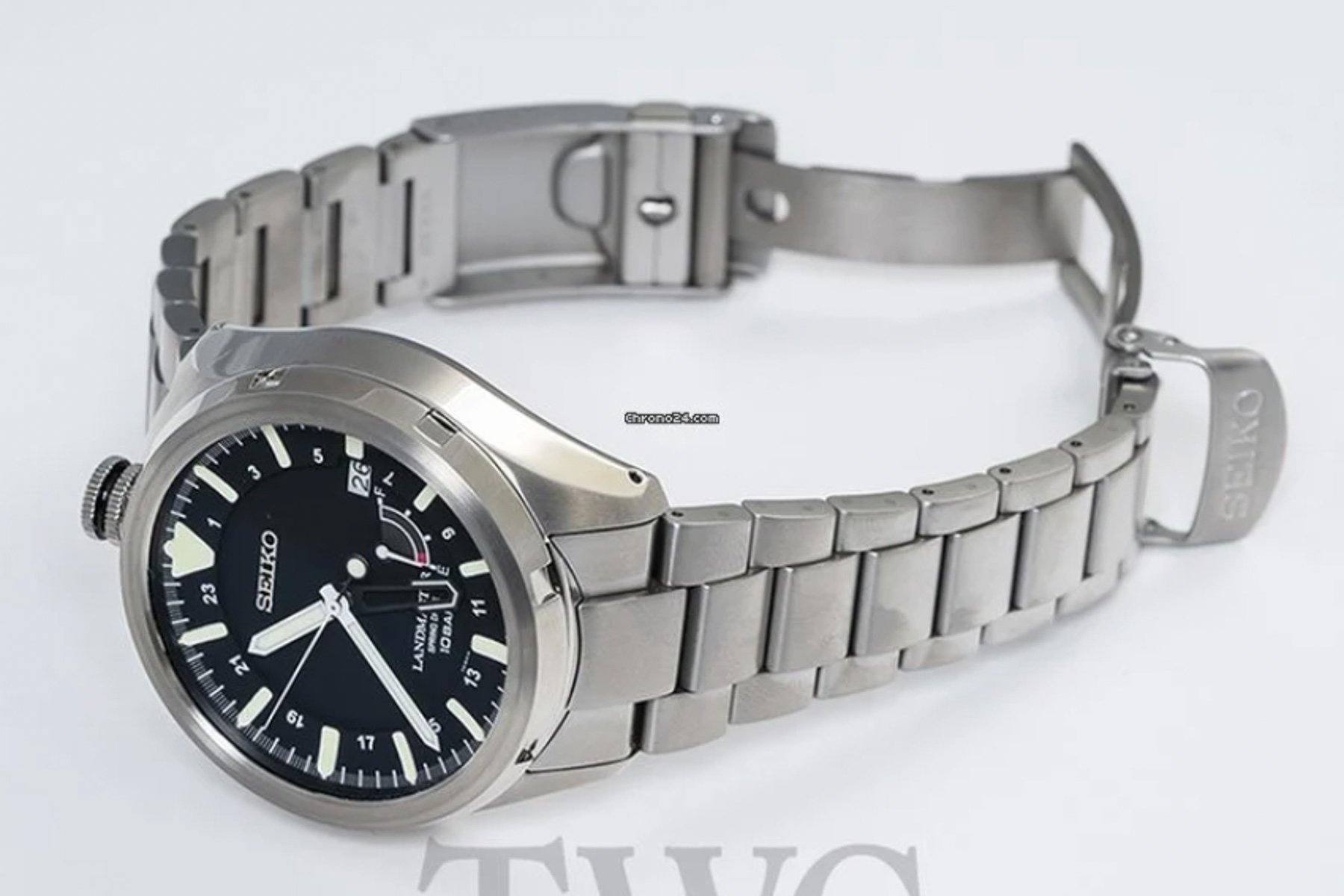 The Seiko SBDB015 Landmaster still lacks in the popularity department, but general oversight can be your gain. These watches have classic styling and should look fresh for a seriously long time. I found a nice unworn example on Chrono24 out of Japan. The seller, The Watch Company, along with other sellers, uses the same four stock shots, but this was the least expensive example at just €2,176. Seriously, that’s downright paltry to get into Spring Drive with a GMT function. On that last point, while others are crying in their soup trying to find a Rolex GMT, you can scale mountains with this badass Seiko!

You can tell I like the Seiko SBDB015 Landmaster. It’s time to see if you can deal with its unorthodox large Bullhead styling in what I think is still a very pleasing package. Let the voting begin!