Welcome to the first Wrist Game or Crying Shame of 2021 and we’re starting things off with a look at the TAG Heuer Tiger Woods Professional Golf watch. But first…

I ended 2020 with a watch from Rolex with an anti-magnetic personality. The Milgauss attracted a 69% Wrist Game vote along with some pretty heavy criticism. Folks called it portly, a weak performer, and hardly deserving of its professional-grade nomenclature. This week, we have an incredibly focused watch up for your voting pleasure. Enter the TAG Heuer Tiger Woods Professional Golf watch. I have a prediction on how this will go, but much like a Tiger Woods tournament entry these days, you just never know if it will end in a “DNQ” or a cup win. Let’s see… 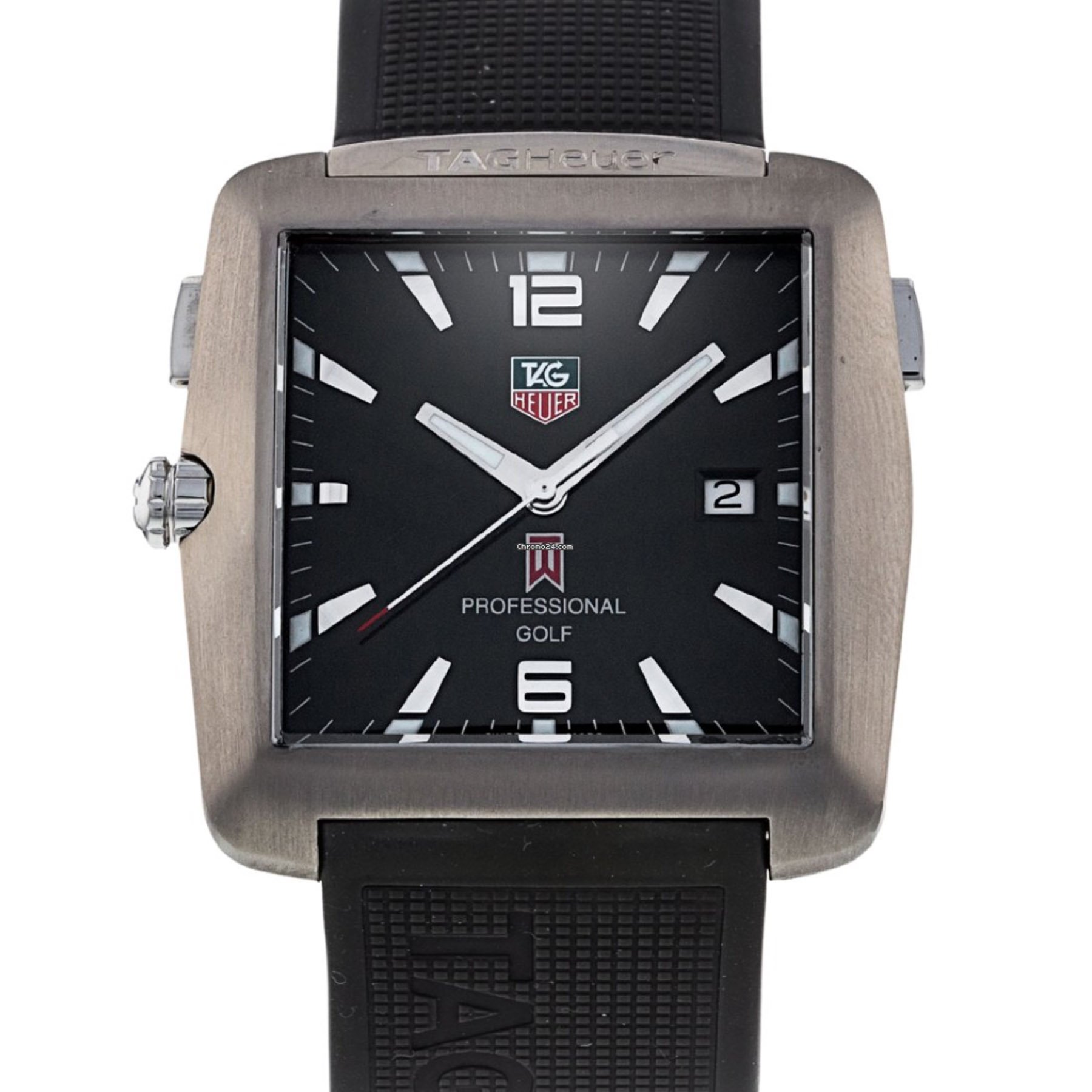 It’s fair to say that Tiger Woods is one of the most famous, if not THE most famous, golfers in history. He came around at a time when most of us had become accustomed to all-conquering sports stars like Michael Jordan, Wayne Gretzky, and the like. I won’t get into stats, but there was a period there when Tiger won everything and that wasn’t so normal for golf. Unsurprisingly, he also racked up a lot of endorsements. Watch wise, he started with Tudor (that’s crazy), but in 2003 he moved to TAG Heuer (he’s now with Rolex). A couple of short years later in 2005, he worked with TAG to create the Tiger Woods Professional Golf watch. To be honest, I actually kind of dig it.

More than 15 years ago, TAG rolled out quite the press release on the new Tiger Woods Professional Golf watch. They went into glorious detail about how golfers normally remove their watches before playing. Such a move often results in high-jinks from questionable caddies who suddenly pocket bi-color Datejusts. Apparently, wearing a watch during golf can be uncomfortable. The wrist does a lot of flexing. It swells, it dislikes running into a sharp watch crown. And then there’s the shock situation. When you’re hammering away with that Big Bertha, the impact of clubface on balata ball can hurt those precious mechanical watch components. 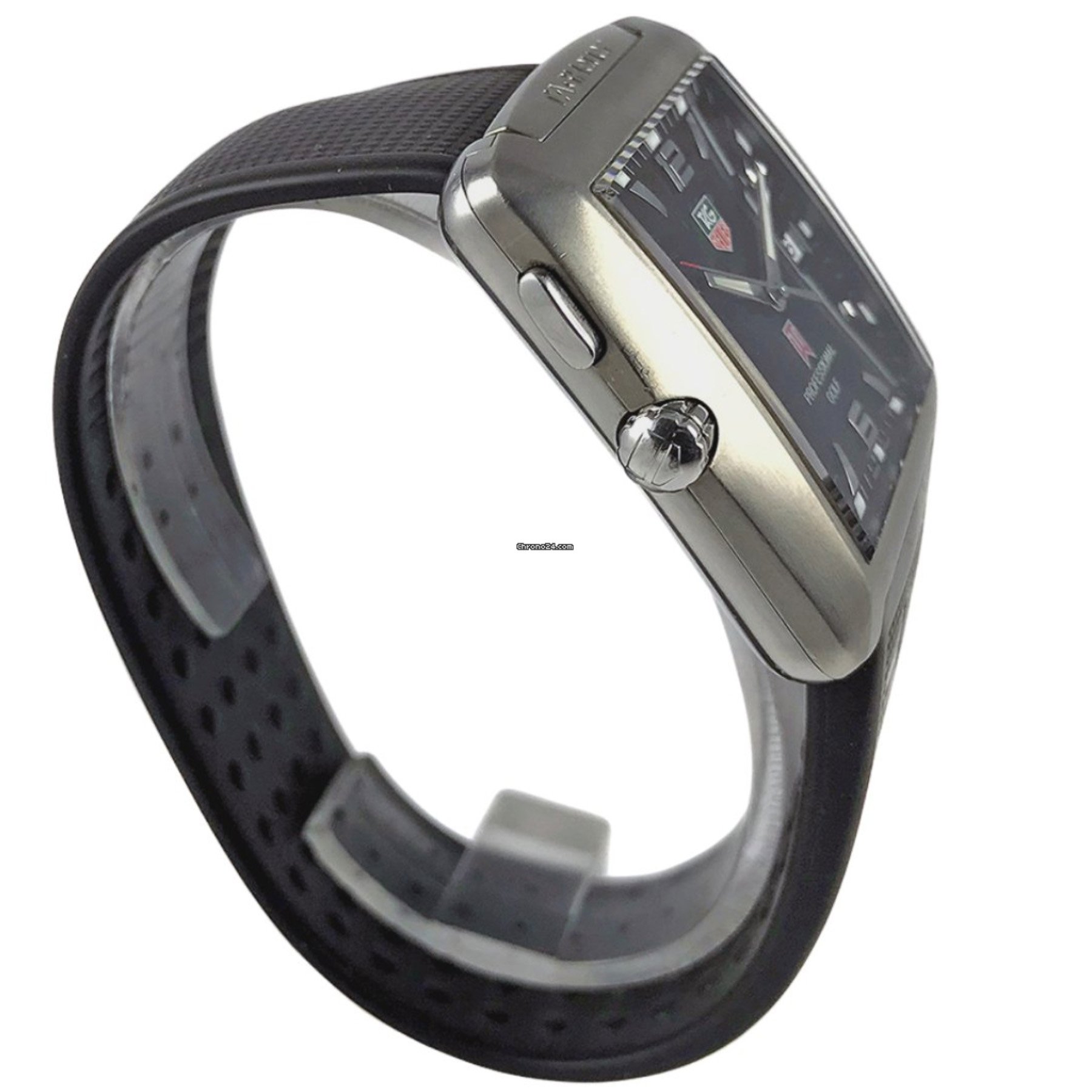 I can just imagine Tiger Woods hunkering down in a Swiss lab with a bunch of watchmakers and Swiss designers. The latter likely scoffing at Woods while he tried to explain to them the rigors of the game. Woods likely returned their snooty remarks by removing his lab coat to show them the green on his Masters blazer. Such a standoff has likely never occurred since in La-Chaux-de-Fonds. The result of the creative struggle was the ensuing Tiger Woods Professional Golf Watch.

It apparently took a lot of development to come up with the Tiger Woods Professional Golf Watch. In the end, links-loving buyers had the opportunity to plunk down roughly $1,295 on one of 8,000 limited edition watches. For the life of me, I can’t figure out what happened after that in detail, but it seems that TAG Heuer rolled out a number of different variants on the theme and this is a later version. The watch itself was pretty neat, though. TAG gave the 38 by 40mm rectangular watch a titanium case and a flexible black silicone band. The whole thing came together like one of those dorky copper bracelets that superstitious golfers love to wear. 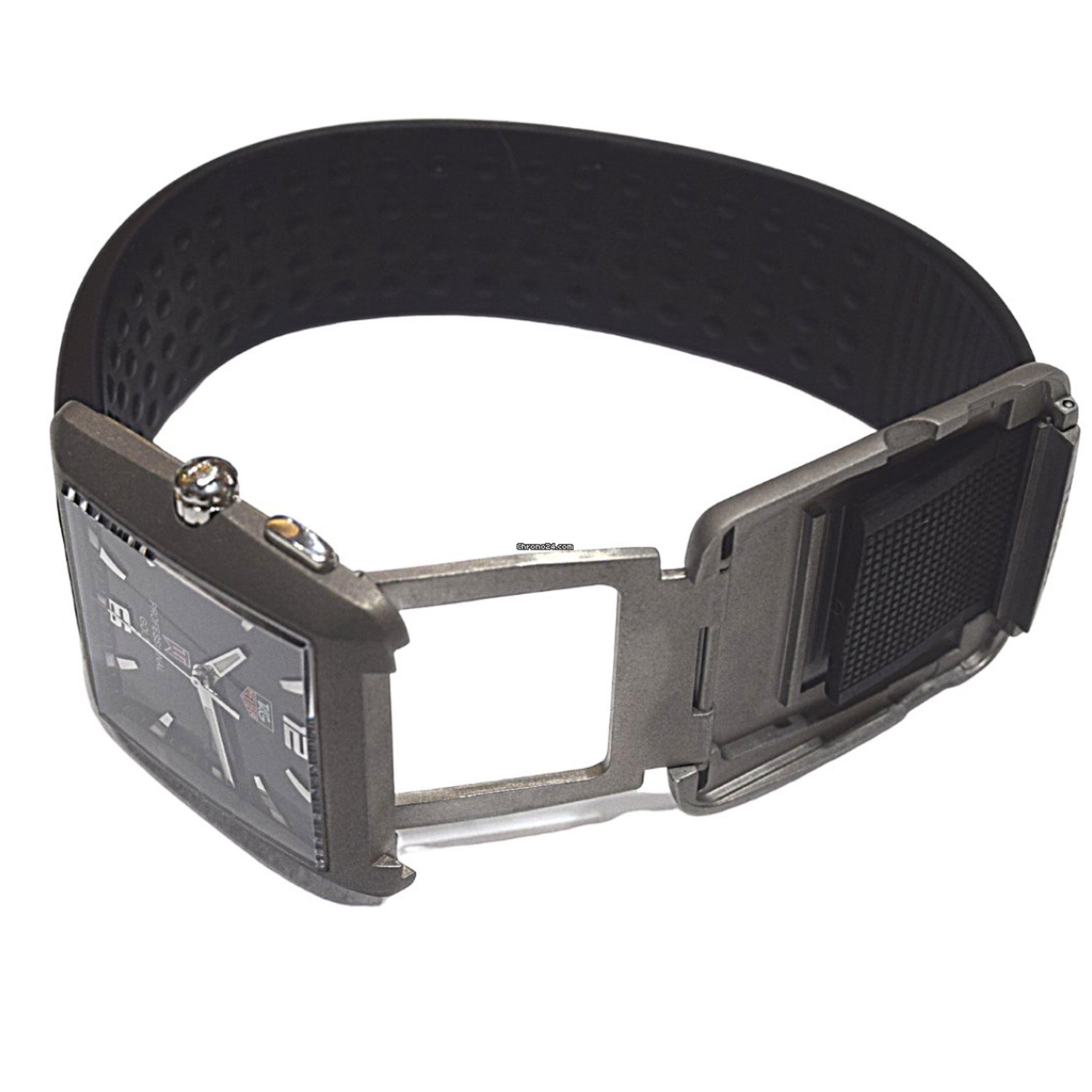 The big news on the TAG Heuer Tiger Woods Professional Golf Watch was its case. Note the two buttons on either side and realize that the watch head actually clicks into a cradle-like case. Folks, this watch has no buckle per se and that makes it incredibly comfortable when you’re slicing and fading your way to the flag. TAG also placed the crown at 9:00 to keep the crown from digging into the wrist. Here again, when you’re pulling your best “Shooter McGavin” after sinking a three-putt, you’ll be in complete comfort.

Traditional watch snobs won’t like the use of a quartz movement in the TAG Heuer Tiger Woods Professional Golf watch. TAG chalked up the choice due to the movement’s shock resistance properties. That’s hard to fault. A sapphire crystal along with Super-LumiNova ensures good visibility for those early shotgun starts. Finally, the watch has 50 meters of water resistance, which should see one through some country club poolside antics and 19th hole beverage spillage. Conversely, if you feel like diving into the nearest water hazard to take on “Chubbs Peterson’s” nemesis, you’re covered. 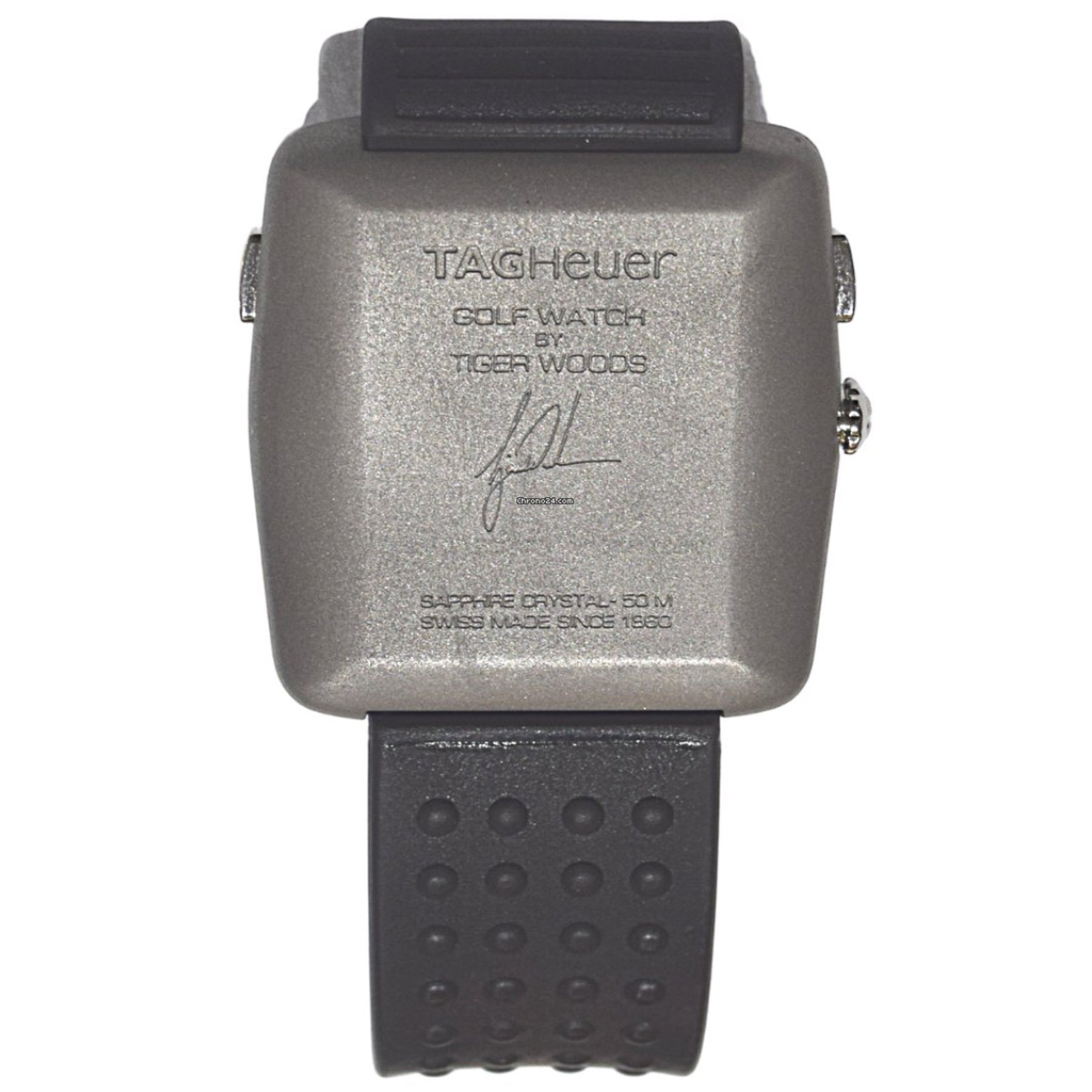 Teeing off with some thoughts

I’ve had a bit of fun at the expense of the TAG Heuer Tiger Woods Professional Golf watch. That being said, you have to have a touch of admiration for such a focused piece. After all, it’s not a retro retread or some weak sauce collab. No, this is a tiger of a collab. I did some forum reading and it seems that golfers actually did enjoy (and presumably still do) this watch. They loved its lightness but moaned about the >$100 strap replacement cost. Jeez, don’t these duffers often pay this much just to go out and hack away for a single Saturday? 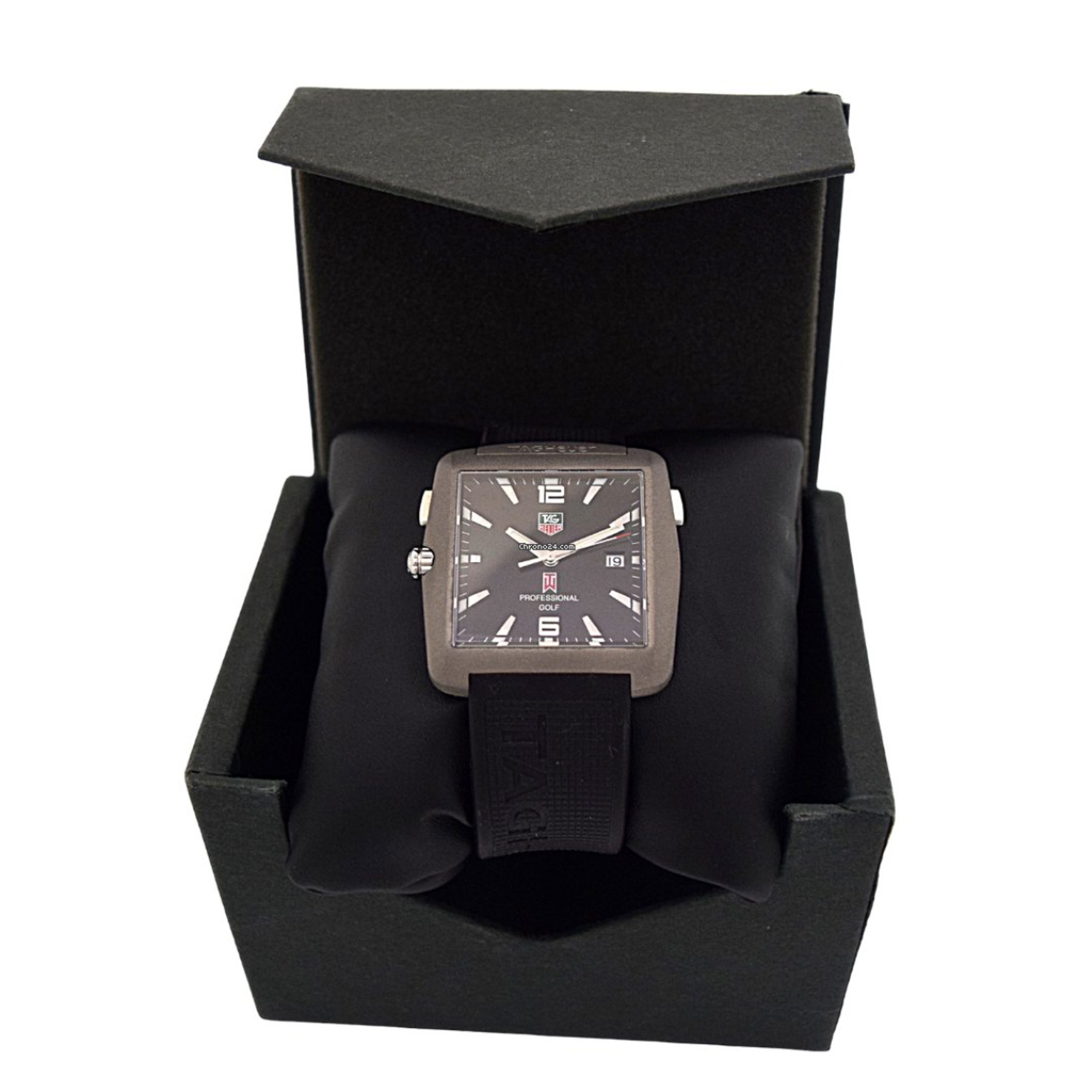 I actually struggled to find a decent TAG Heuer Tiger Woods Professional Golf watch. Most are well worn and they almost always lack the box and papers. It turns out that Chrono24 and seller Carrera collection in Madrid have a very clean candidate, box included. The watch and photos are from the seller and they’ve done a nice job of documenting this piece. The price, however, stands at €1,190 and that’s not far from the original retail value. Perhaps these are becoming collectible or the seller has realized that the examples at 60% of the price look more like the Mulligan you just hit. Now, it’s your time to take a swing at this watch. How will you handicap it?