It’s the last Wrist Game or Crying Shame of 2020. Let’s end this crazy year with the kooky Rolex Milgauss. But first…

Last week, just before Christmas, I proposed the Cartier Tank Basculante and your response was a resounding Tank you very much! The Cartier absolutely crushed it with an 87% Wrist Game win. I’m not sure if that proves that you all have class or a thing for discontinued watches. Regardless of your motives, you’ll have your chance to decide on another bygone timepiece with today’s Rolex Milgauss 116400. 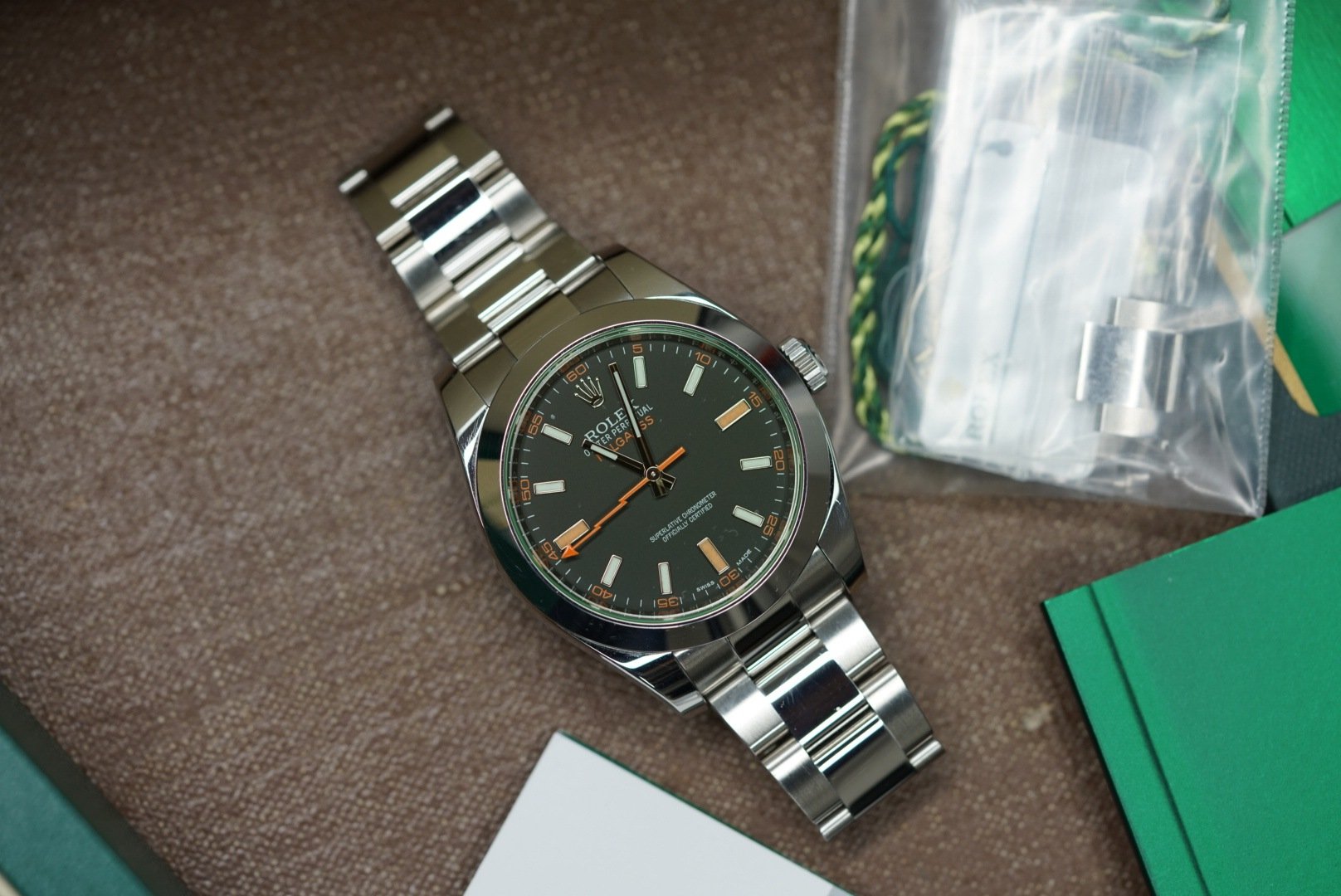 The Rolex Milgauss returns in 2007

It was way back in 2007 when Rolex reintroduced the modern anti-magnetic Milgauss. I recall this period of my life because I was living in a somewhat secluded desert environment otherwise known as El Paso, Texas. I had one other watch buddy at work who was very into Rolex and we chatted about new things like the Milgauss and the GMT-Master II with its green hand and ceramic bezel. Do you remember those heady futuristic days?

In any case, the Rolex Milgauss 116400 returned after an absence since 1988. It seems that no one actually noticed this absence except for the Rolex marketing department. The old Milgauss 1019 was so unpopular that some didn’t sell until the ’90s. I’d bet that those buyers got a discount and their reward is a watch that now sells for €20K and upwards. 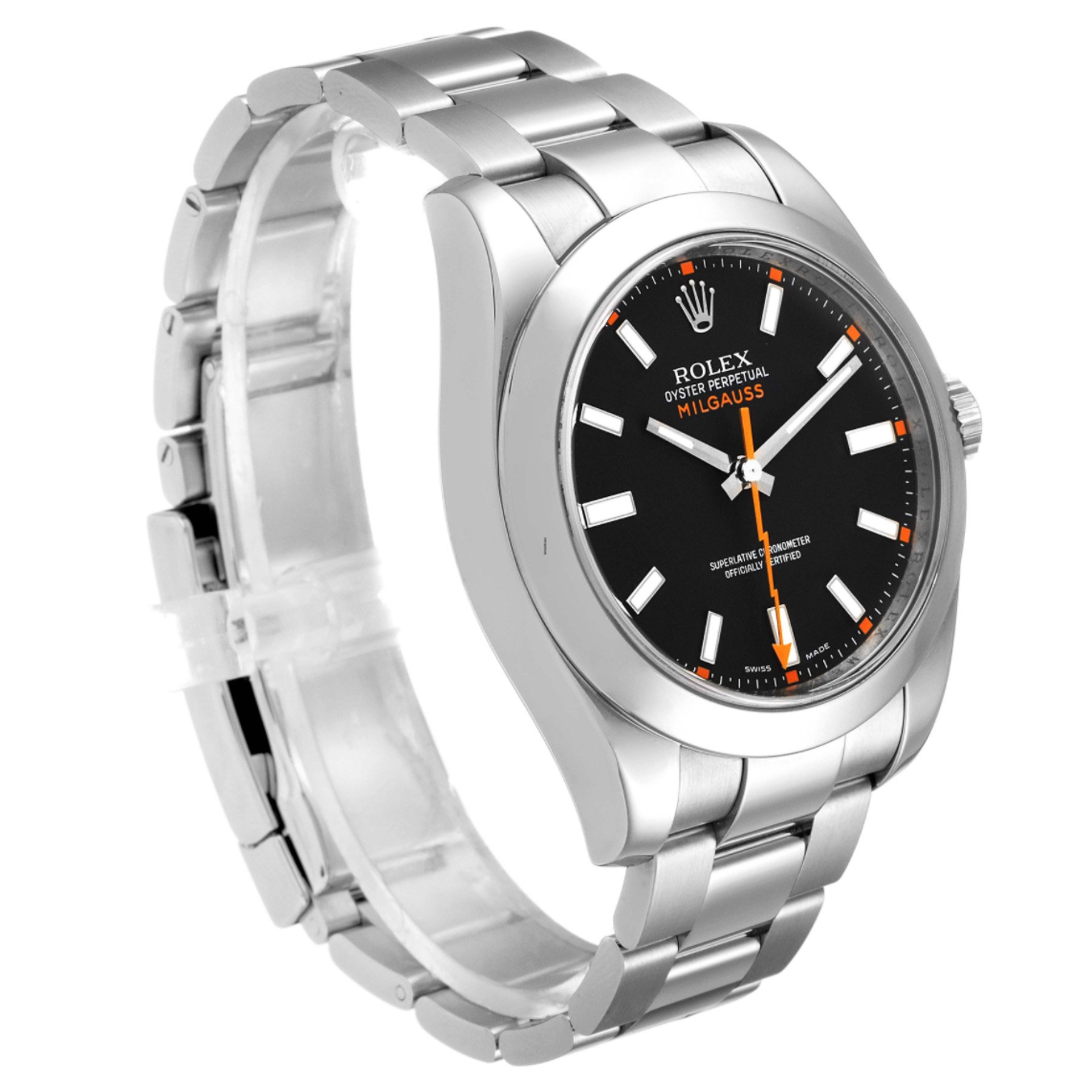 The Milgauss boasts some extra specs

If we go back to 2007, Rolex tried to teach us that we all needed anti-magnetic capabilities on our wrists. Suddenly, all of us were gearing up for internships at CERN. It was that or we all spend too much time hanging the kids’ latest Picasso to the fridge with magnets. The name “Milgauss” tells us that these watches should protect up to 1,000 gauss. That’s nothing compared to the >15,000 gauss Omega Aqua Terra, but an article over on Hodinkee tells us that the Rolex can withstand more than its name for a period. In order to manage such a field, Rolex gave the watch some sort of alloy shield around the movement. It also equipped the 3131 automatic with a paramagnetic blue Parachrom hairspring. 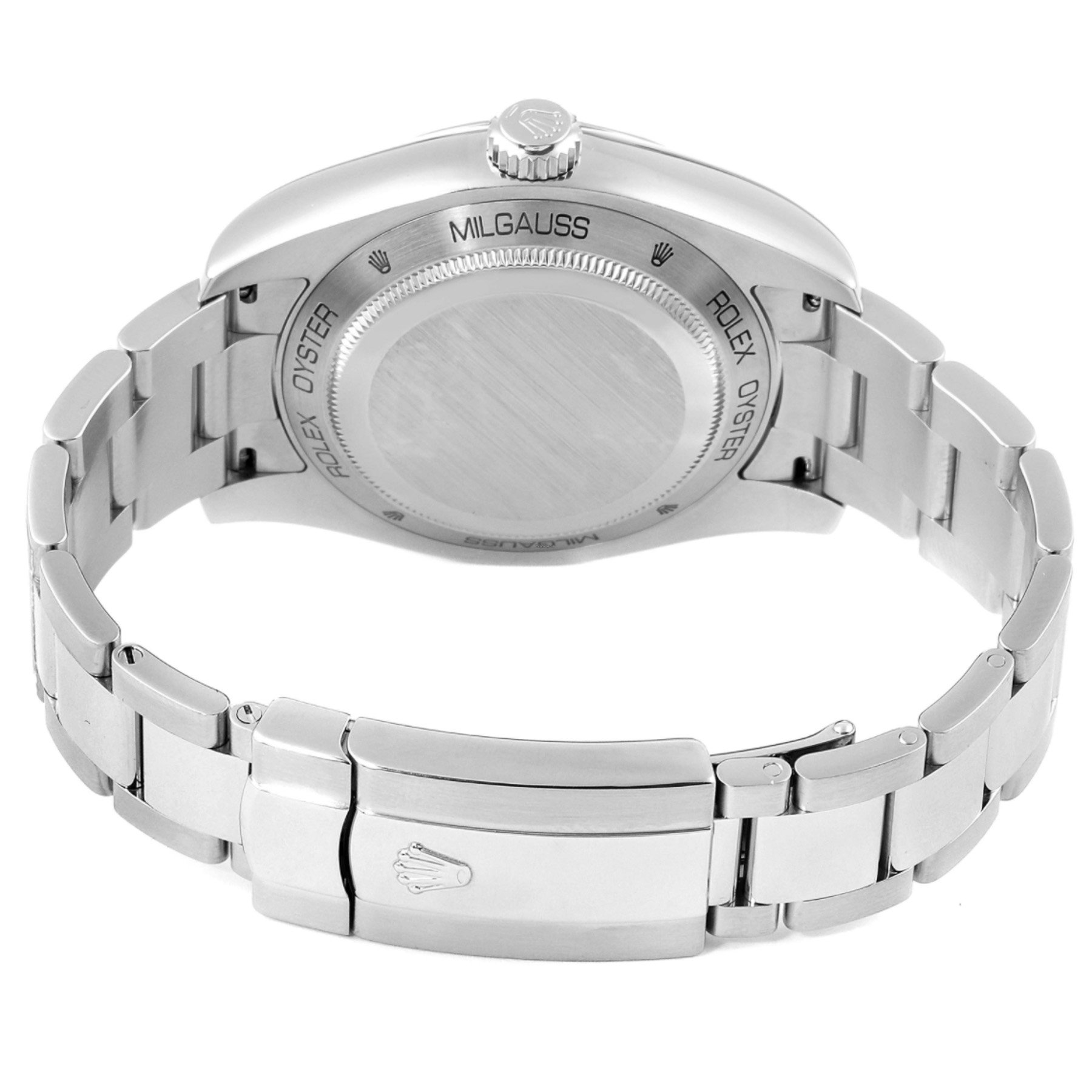 Back in 2007, the Milgauss debuted in three distinct flavors. All used and continue to use an orange lightning bolt seconds hand. All cases are stainless, 40mm, a bit over 13mm thick, and come on an Oyster bracelet. A unique model with black dial and green sapphire crystal showed itself as the anniversary “GV” model. That was the most desirable piece at the time and is still in production alongside a newer variant with green crystal and electric blue dial. Two normal models were also on sale. A white dialed model with orange lume plots and details faded out in 2016. Today’s black dialed model disappeared in 2014 and had the most austere styling. It lacked Arabic numerals around the minutes track. 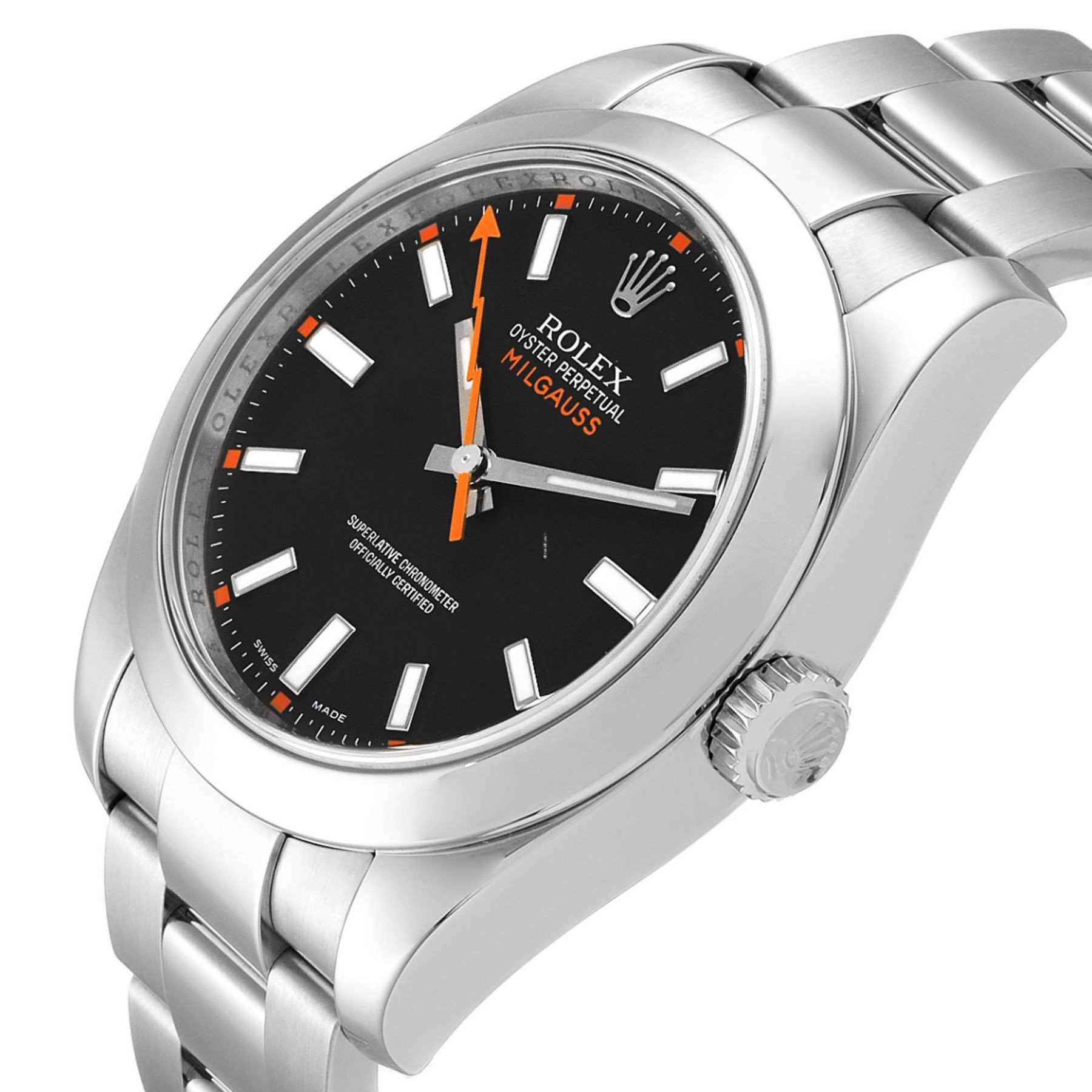 Thoughts on the Milgauss

I’ve gone back and forth on the Milgauss many a time since its reintroduction. It’s a strange watch with such a questionable purpose. On the other hand, I like the colors and rare show of attitude from the buttoned-up brand. What I don’t like are the polished center links on the bracelet. The Milgauss must rank as the nerdiest, most toolish watch from the brand and Rolex decides to festoon it in bright wear. Then again, their official website doesn’t even call out the magnetic field resistance specs. That has always made this watch feel a bit like a money play to me. Rolex is making something with a purpose, but realizes that purpose is a bit silly, so they don’t really discuss it. It’s as if they know that if they provide too much detail no one will buy it. 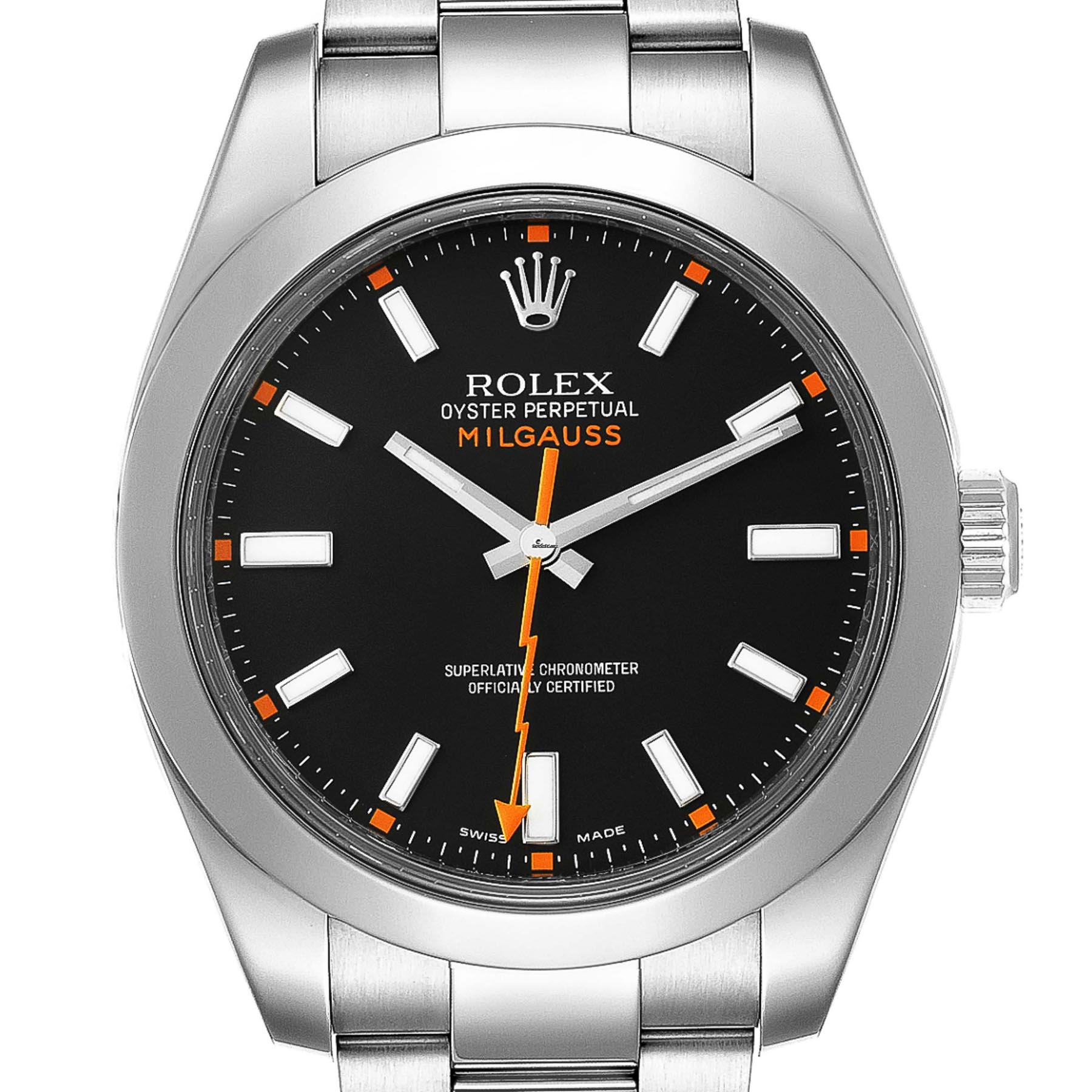 Well, it turns out that perhaps not so many did buy the black dialed Milgauss 116400 we see here today. In fact, I know absolutely no one who actually wants a new Milgauss, but that’s beside the point. As mentioned, the black Milgauss left us almost seven years ago in 2014. People speculate on whether this or the white version will be the next collectible, but I personally like the cleaner black variant. The orange minute pips and white lume look crisp. I feel like there was a time when one could buy these disliked pieces for well under retail, but today they’ve risen to right around par. Still, for a bygone recent steel “sports” Rolex, I guess that’s not too bad. 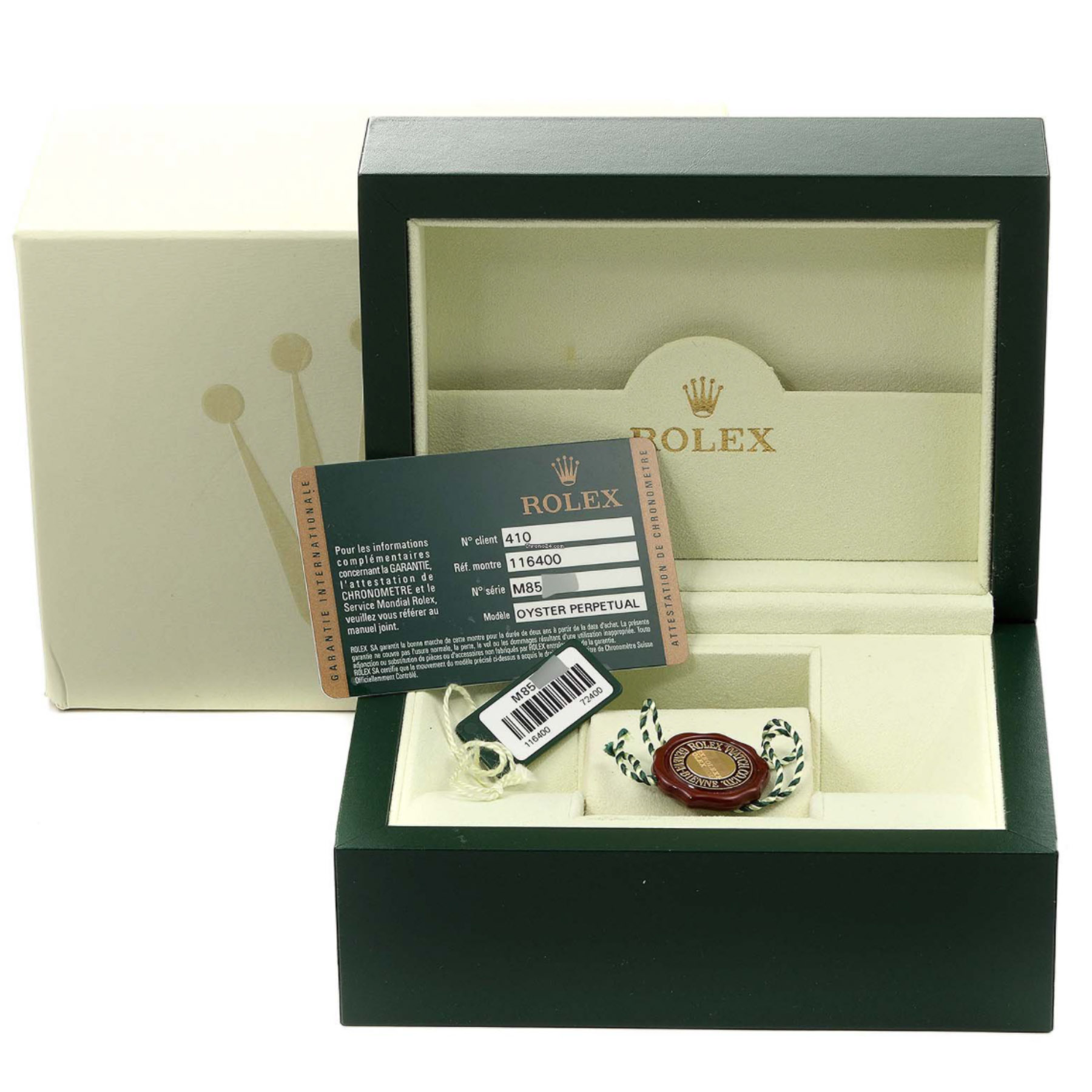 Today’s Rolex Milgauss comes to us via Chrono24 and the Atlanta-based seller SwissWatchExpo. The photos and watch are property of the seller. For €6,702, this watch looks like it’s in lovely condition and it comes with all of its requisite boxes and paperwork. It shows an original sale from back in 2008 and even has its hang tag. The price, by the way, is about €900 less than the current retail price of either GV model on sale today. The question for you folks is whether this dearly departed Milgauss is a decent deal at this price or not? Take the time to vote and let us know your thoughts on this oddball Rolex model.