As 2019 kicked off, the industry was buzzing for the star-studded luxury watch fair SIHH. Since the rise of the Independents in the past two decades, they have gained a reputation as the critics and connoisseurs’ favourites. FHH (Fondation de la Haute Horlogerie), the organiser of SIHH, clearly knew the Independents would draw a crowd. In 2016, they announced the addition of nine independent brands set up in a big hall called the Carré Des Horlogers.

This year, the Carré grew to 17 brands, practically half of the total 35 exhibiting names. The Independents are undeniably a force to be reckoned with. To put it simply, the Carré itself is one big show-stopper.

The Carré, adjacent to FHH’s own booth, at the start of the exhibition hall, is a space where retailers with an edge or a niche, discerning watch media, brand patrons, and sophisticated collectors hang out. They come to be wowed and be awestruck by the tiny engines of creativity outside of the norms.

While everything in the Carré is a feast for the eyes and blows your mind, I can easily single out the beast of the show by independent legend URWERK: the Swiss watch brand’s 55-pound portable desk clock the AMC (Atomic Master Clock). 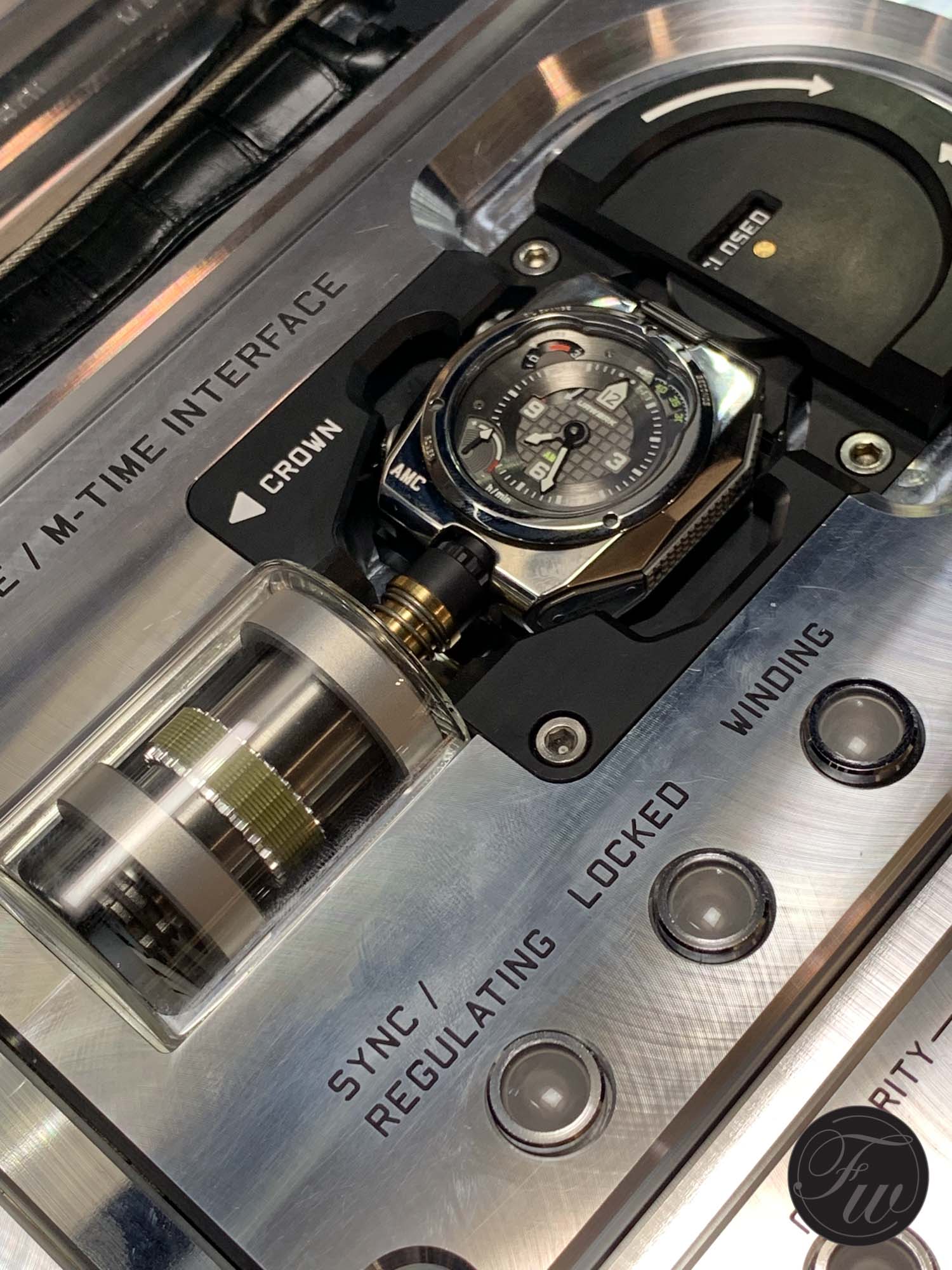 The AMC sets the time via GPS to your location, regulates balance rate (taking into account humidity and air pressure), and winds the paired URWERK wristwatch when docked. The error margin is one second in 317 years to deliver the utmost precision. A mechanical oscillator within the wristwatch absorbs this information and implements it. The in-house AMC calibre ticking inside also provides an 80-hour power reserve. On the outside, it bears a military tool-watch style with an open-work baseplate and magnificent surface finishing. 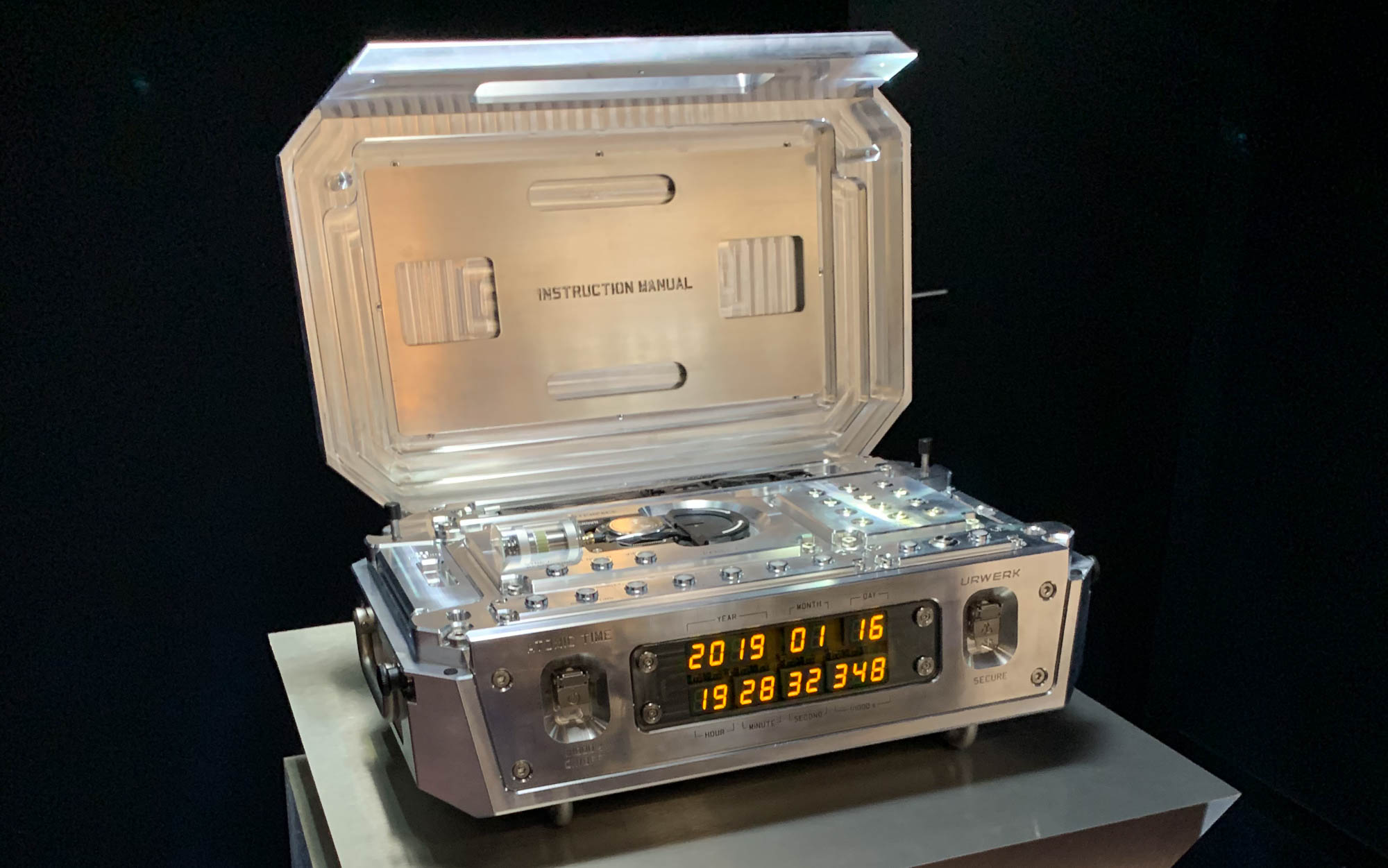 The AMC is a 21st-century reinvention of Abraham-Louis Breguet’s Sympathique clock with cutting edge technology that has been in development for almost a decade. A world first for a fully mechanical watch and a modern ingenious feat. 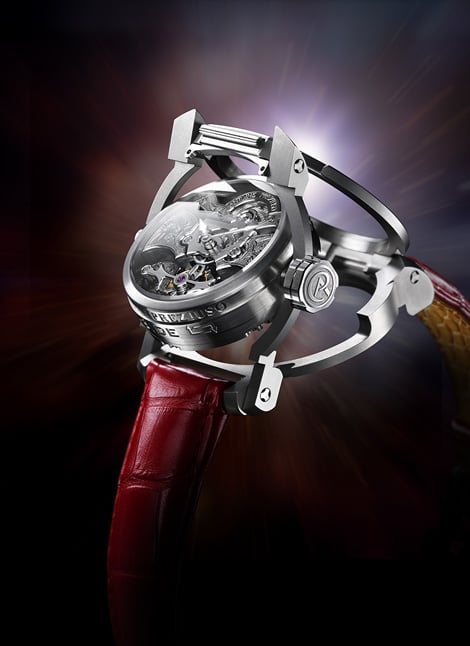 Outside of the fair, we also tried to sweep through the independent shows by Lake Geneva. Well, we tried. But we were so bowled over by our discoveries, we diverted more time to scouring for these exciting gems than sipping champagne at SIHH!

While we rushed around between appointments, one that literally caught my eye and stopped our track was an unusual-looking timepiece by GPHG double-award winner Antoine Preziuso. It was perhaps a style that (pleasantly) surprised me from what I knew of the brand’s elaborate artistry. Famous for their patented horological inventions and highly adorned masterpieces, the Genevan family-run watchmaker introduced us to a rugged entry-level time only model, B-Side Automatic.

Named after the B-sides of music records, the concept is to bring to light the flip side that’s less admired but equally deserving, if not more. The star that takes the stage here is actually the movement side. It is an illustration of the modern way of life, for timekeeping in a watch is secondary to us, given mobile devices and digital instruments are all around. Talk about watchmaking art!

With the unique B-side case construction, the wearer simply presses a discreet pusher, the watch then opens, unfolds, turns, and reveals the dial side without its leaving the wrist. The watch is masculine, sporty, and modern. It wears like a 42mm although the lugs extend to 45mm. As usual with the independents, the series is limited. Only 16 pieces will ever be crafted. 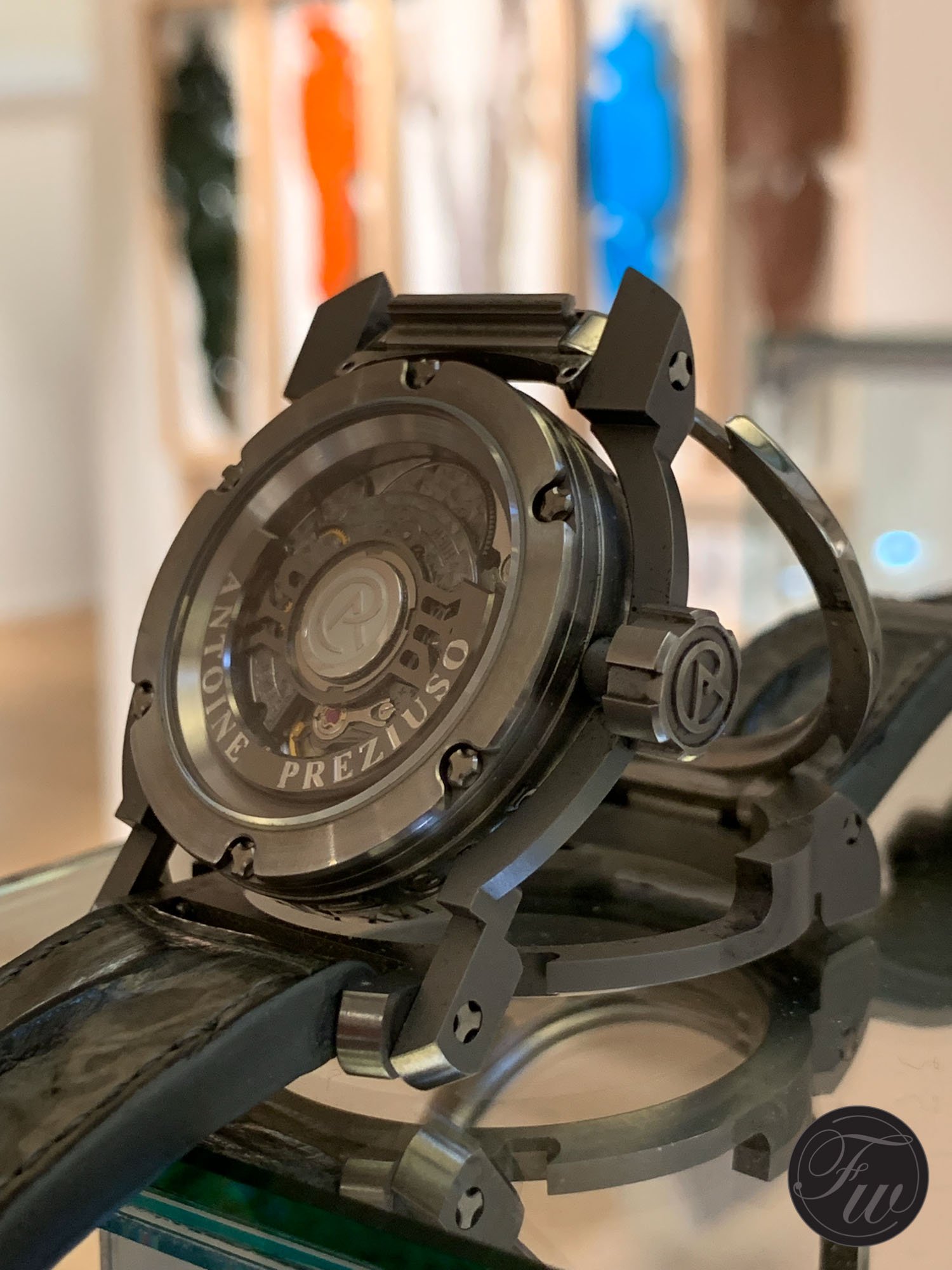 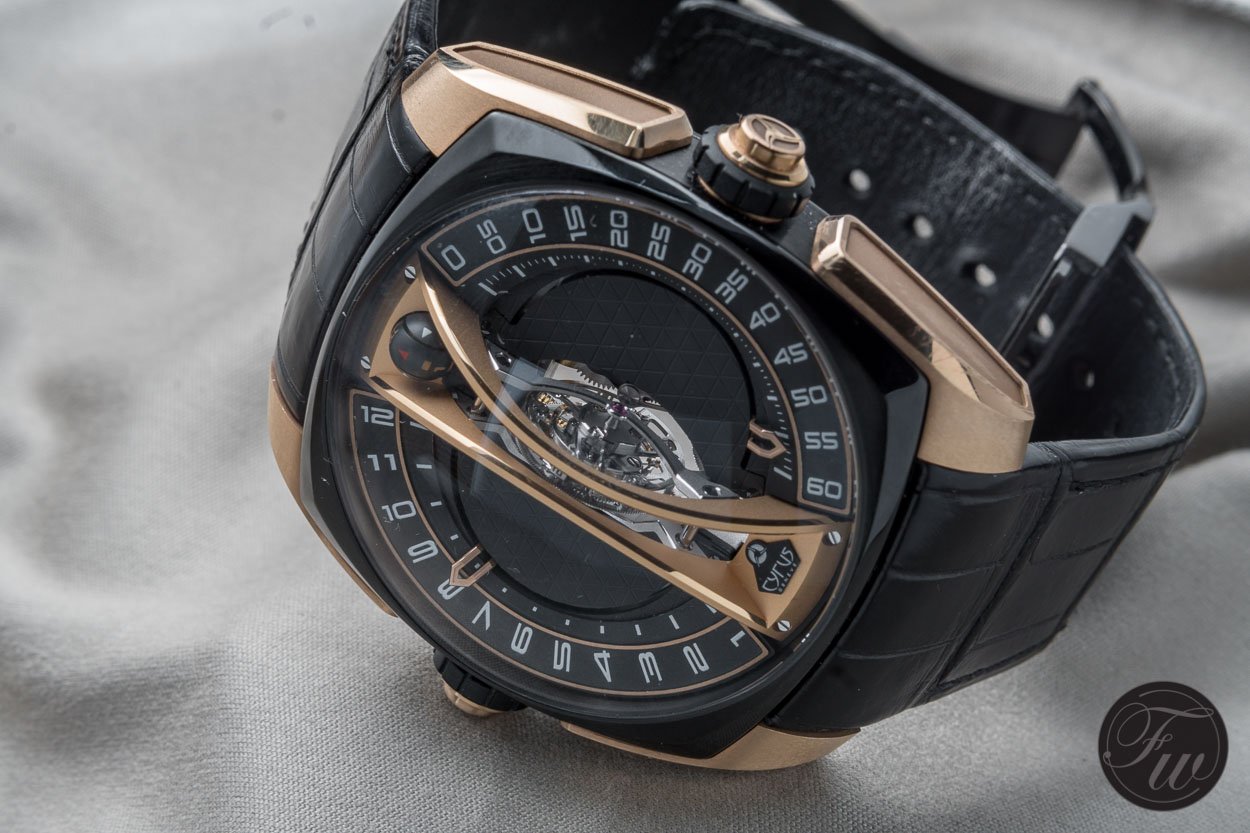 Last but not least, we had the privilege to see another world first: the Klepcys Vertical Tourbillon by Cyrus.

In a watchmaking first, the tourbillon is placed vertically at the centre of the dial rather than horizontally at the six o’clock position, as is common. Now, this isn’t just showboating – a technical team painstakingly studied that, at this angle, the cage, which contains the regulating mechanism, rotates on itself, offsetting the negative effects of gravity and making the watch even more precise.

This is all achievable because Cyrus exists to pursue horological innovation and originality, also thanks to their co-founder Jean-François Mojon. Mojon is an award-winning watchmaker, who conveniently is the boss of a high-end manufacture that gives him the free rein for Cyrus and develops watches for many big names you already know. 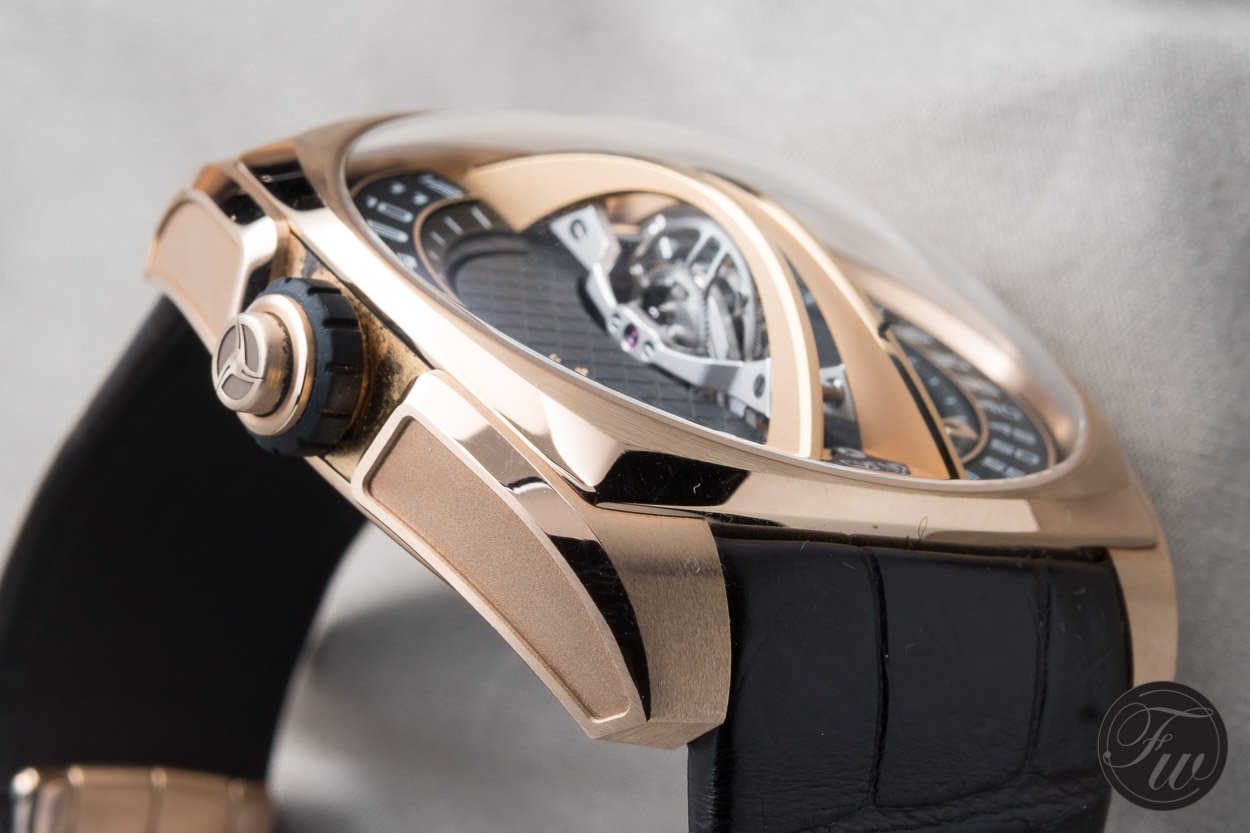 The Klepcys Vertical Tourbillon boasts jumping hours, retrograde minutes and a massive 100-hour power reserve. The centrally positioned tourbillon gives the watch a sense of balance and a design that just looks achingly cool on the wrist. Only 38 pieces will ever be produced.

While most of the major brands at SIHH measure their production in tens or hundreds of thousands, the combined annual production of the brands in the Carré and outside the fair in Geneva would be just a fraction in comparison. What they lack in volume, they make up for in creativity, ingenuity and exclusivity. And I wish we had more column inch to cover all them!