Come on and slam, and welcome to the jam.
Balazs Ferenczi
comments ...
Share

Basketball fans around the world are eagerly waiting for July the 16th for a straightforward reason. That is the release date “Space Jam: A New Legacy,” starring LeBron James and, who else, Bugs Bunny. Twenty-five years after the first film, which starred His Airiness, Michael Jordan, made history the highest-grossing basketball movie of all time, the franchise returned for a second installment. Choosing LeBron James, arguably one of the best players of the (current) NBA, as the lead was a no-brainer, and I can’t wait to see the film. However, I’m not the only one looking forward to the movie.

Kross Studio, the Swiss Haute Horlogerie brand, created an extraordinary timepiece, the “Space Jam: A New Legacy” Collector Set to commemorate this occasion. This 10-piece collection features a set of funky watches dressed in Space Jam colors, equipped with one of the most prestigious mechanisms of the watch industry: the tourbillon.

If you have not heard of Kross Studio, don’t feel bad. The company only came to the scene in 2020. Founded in Switzerland by a group of five entrepreneurs, Kross Studio specializes in creating art objects embodying immersive visual experience, innovation, and exclusivity. Keeping the values mentioned above in focus, their mission is the produce high-end horological collector’s items.

The studio’s first creation was a reimagined version of the famous 1989 Batmobile in the form of a desk clock. The original Batmobile was the centerpiece of technology in Tim Burton’s two Batman movies: Batman in 1989 and Batman Returns in 1992. The “1989 Batmobile X Kross Studio” pays tribute to this iconic vehicle by transforming it into a fully functional clock. The second creation coming out of the company’s headquarters in Gland was the “Death Star Ultimate Collector’s Set.” This was the first time Kross Studio created a wristwatch. 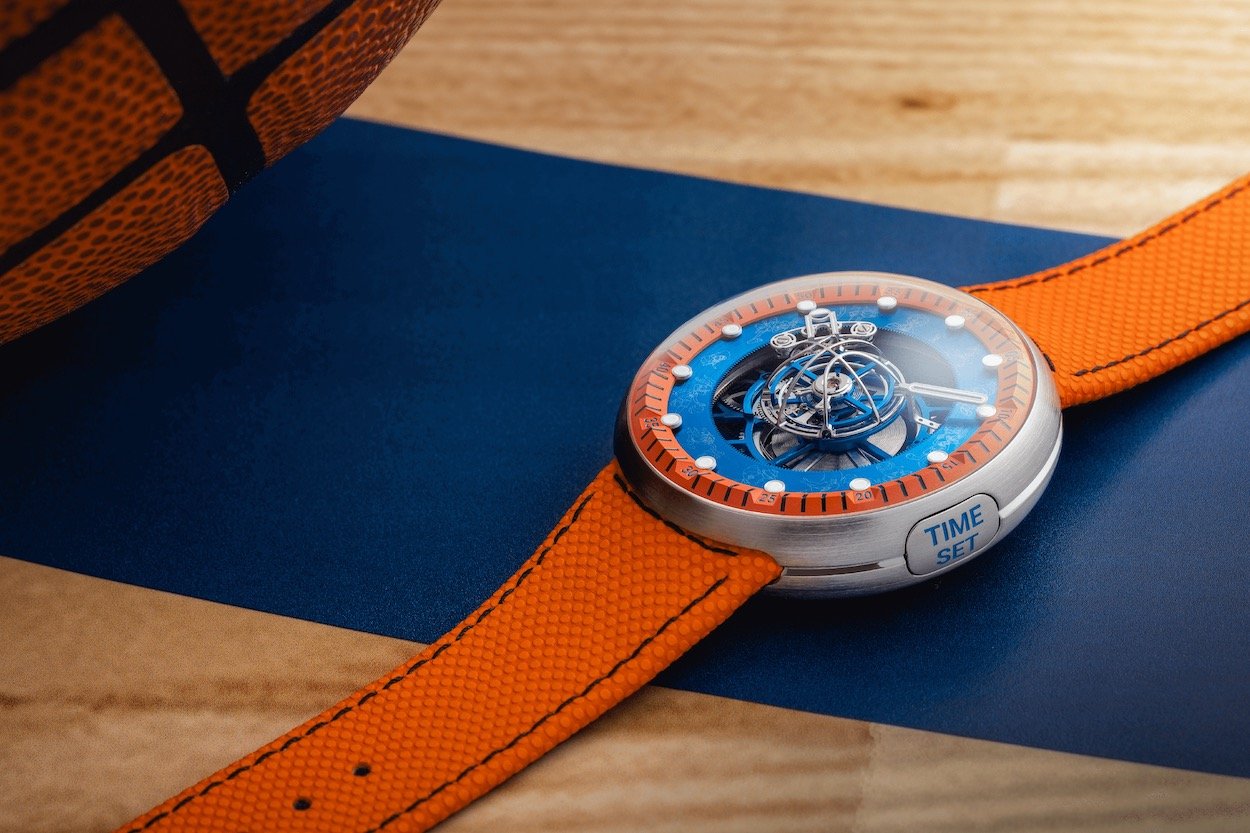 The “Death Star Ultimate Collector’s Set” came to life as a collaboration between Kross Studio and Lucasfilm. The centerpiece was a tourbillon wristwatch depicting the infamous Death Star from the Star Wars franchise. This piece is important because the new “Space Jam: A New Legacy” shares design similarities with that watch. 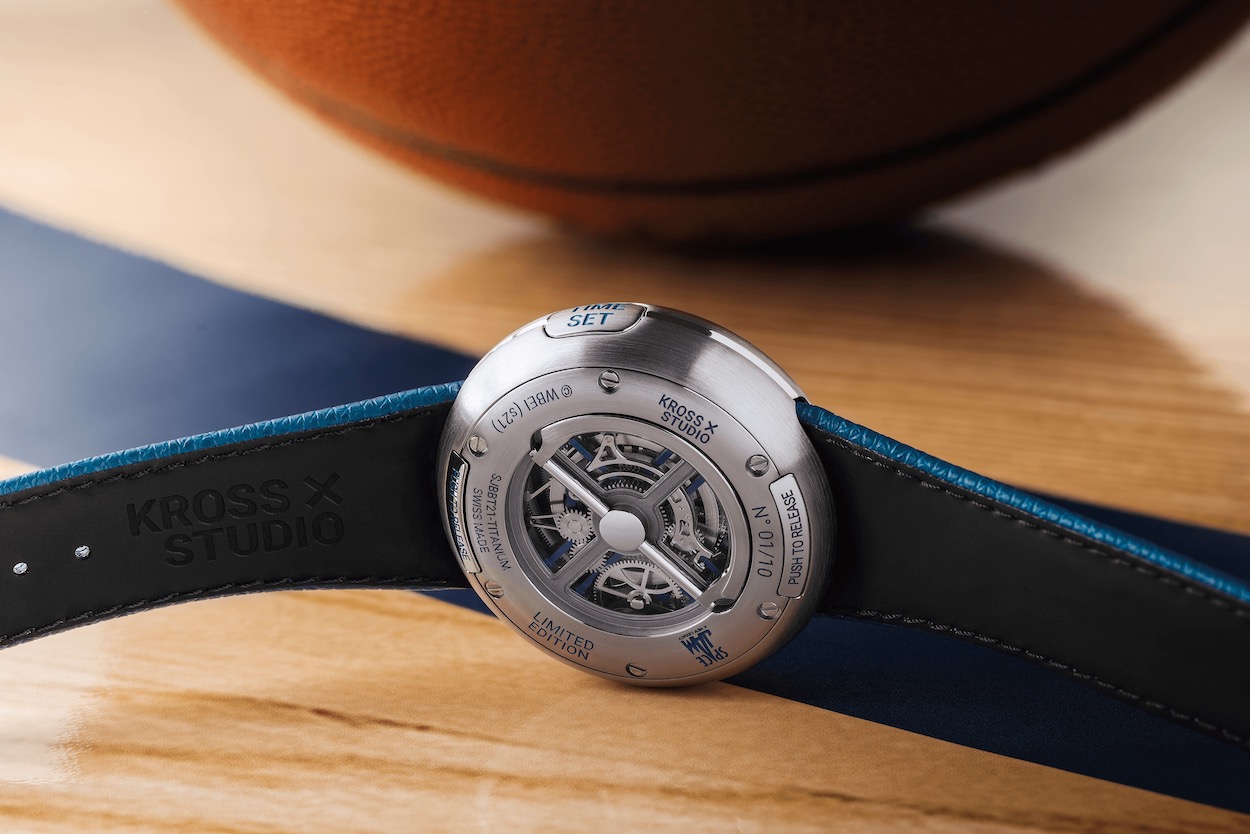 Now let’s look at the new “Space Jam: A New Legacy” Collector Set. The center of the piece is the mechanical, hand-wound movement with an oversized barrel that provides the watch with five days of power. As the barrel is in the middle of the KS 7’000 caliber, the regulator is on top of the barrel. It is in the center, inside the tourbillon cage. Thanks to the fully skeletonized design, everything is visible to the wearer.

This watch is riddled with fun little details. The basketball-shaped movement wheels. stand out to me and the ball design motif continues on the tourbillon cage, also depicting a basketball. Needless to say, the KS 7’000 caliber is wholly developed and produced in-house by Kross Studio. The frequency is 3 Hz (21,600vph); it consists of 27 jewels and 203 movement parts. Overall, the “Space Jam: A New Legacy” Tourbillon has 281 pieces, all hand-made with an ultimate fine-tuned finish. 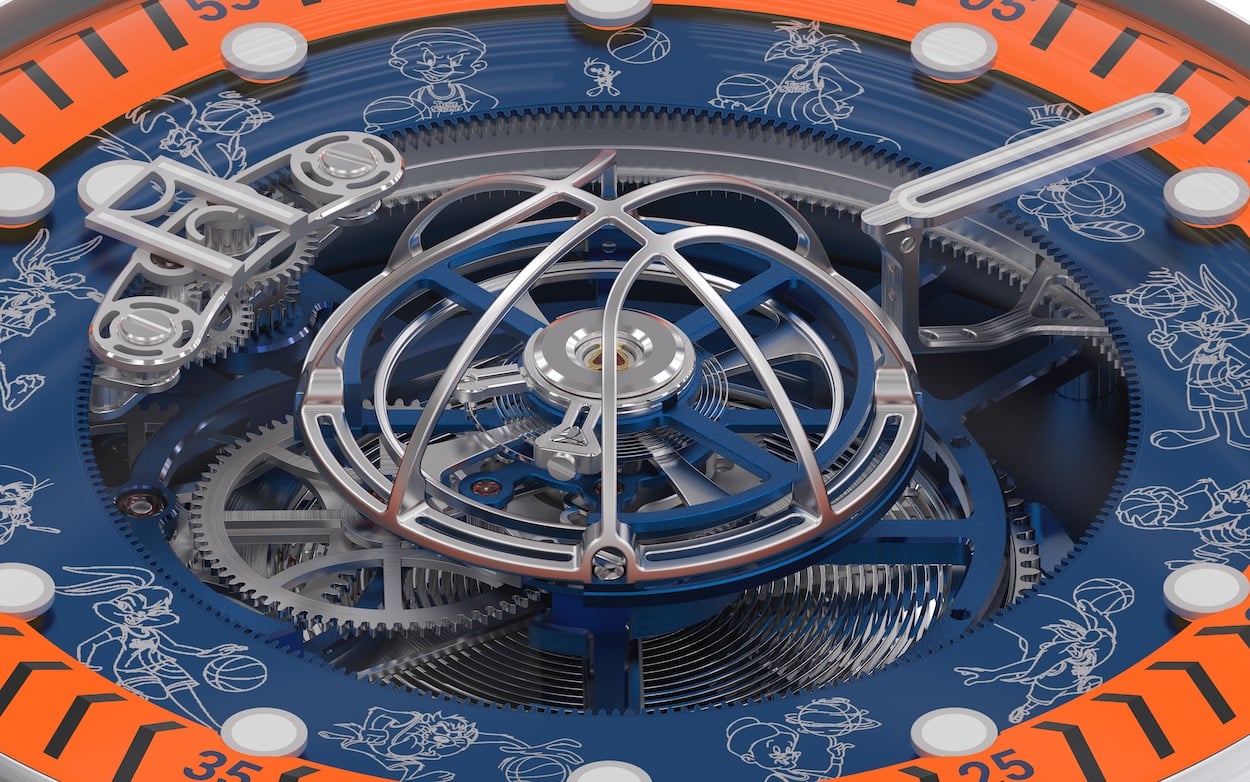 The tourbillon right on the center of the dial is arguably the coolest but not the only feature of the watch. Since that space is occupied, Kross Studio moved the displaying of time to the periphery. While the minute hand looks traditional, it actually has the shape of the free-throw line and the “paint” of a basketball court. Both hands are affixed to the peripheral display mechanism rotating 360 degrees around the tourbillon in the center. Although there is an orange outer scale for the minutes, the “Space Jam: A New Legacy” Tourbillon has no numerals for the hours. Instead, the Tune Squad makes an appearance indicating each hour. Different characters from Tweety to Sylvester, Daffy Duck, and so on serve as indices. 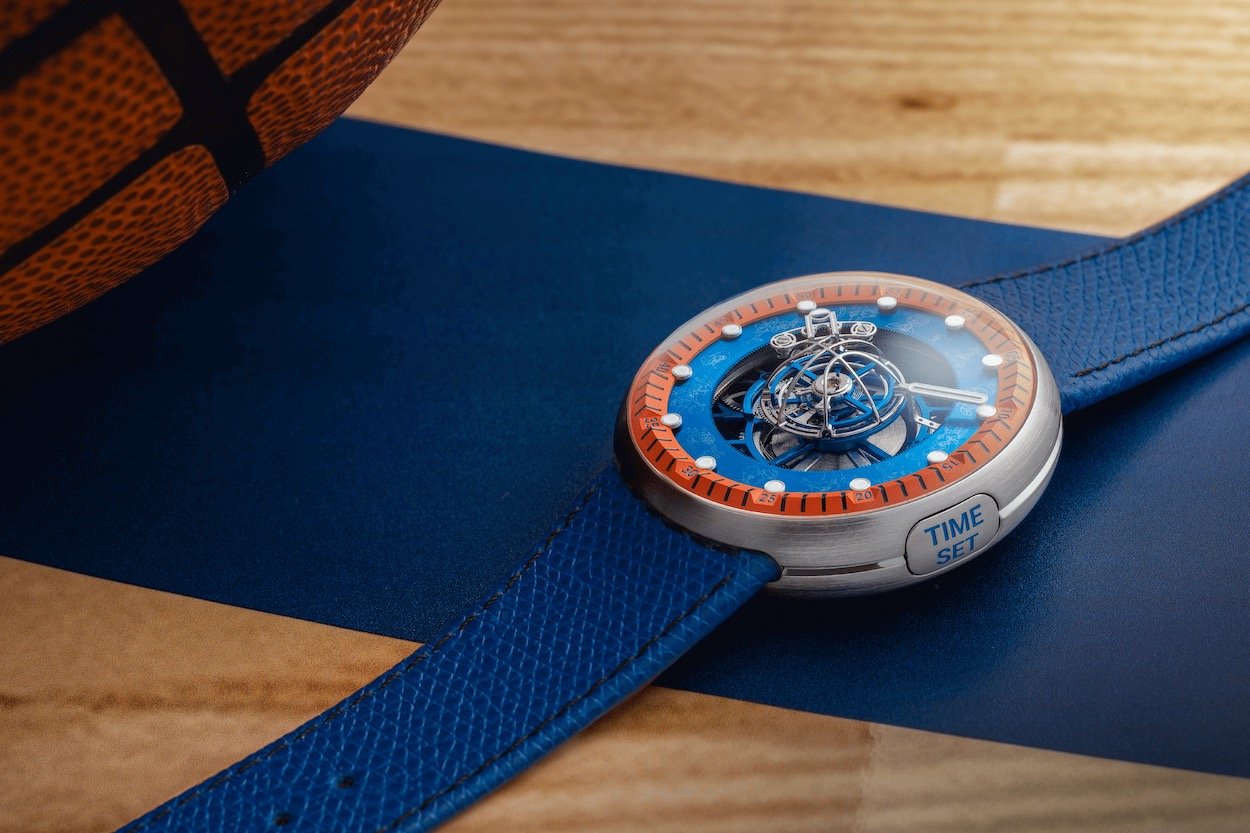 All of this comes in a 45mm titanium case with a sapphire crystal doming over the dial. You might recognize that the watch has no visible crown. The winding and time setting happens with the “D-ring crown” on the case back. Kross Studio delivers the watch with two straps; a blue calfskin and an orange rubber strap with a laser-ablated pattern reproducing the texture of a basketball.

Lastly, we need to say a few words about the functional art piece that serves as the box: the Kross Studio B-BALL. The sculpture takes the form of a basketball crafted from wood and aluminum. By lifting the layers of wood upward on the central pillar reveals the opening in which you can lay the “Space Jam: A New Legacy” Tourbillon.

Hot Topics
Introducing: The Omega Speedmaster Super Racing With Spirate System
162 comments
Design Vs. Specs — Which Is More Important To You When Buying A Watch?
86 comments
The Time To Buy Is Now: How The Current Economic Climate Influences Watch Buying And How You Should React
51 comments
My Predictions For New Omega Speedmasters In 2023
48 comments
A Regret-Free Guide To Buying Your First Luxury Watch — Part Three: Higher-End Options From Omega, Rolex, Grand Seiko, And More
48 comments
Popular
You Asked Us: Rolex or Tudor
Gerard Nijenbrinks
9
Details Count: The New Oris Divers Sixty-Five Bronze Bezel
Michael Stockton
Undone Watches – Hands on Review
Balazs Ferenczi
3