It’s Speedy Tuesday! As you probably know and as its name really suggests, the Speedmaster was meant for those who were active in sports or better yet, racing cars. Long before the Speedmaster became the ‘Moonwatch’, the tachymeter and chronograph were actually used for timing car racing. Even today the Speedmaster collection has two pillars, one is the Moon program and making sure that new models have enough Moonwatch heritage and the other pillar is racing. Whether it is a dedicated Speedmaster Racing or a Speedmaster Professional that refers to its racing history, there is always a Speedmaster that refers to the original purpose of the collection.

One of the dedicated racing models from the past is this Speedmaster Day-Date “Schumacher” Limited Edition as shown below. It is the reference 3529.50 (or SU 175.0087) and was introduced to celebrate the 5th Formula 1 World Championship won by – then Omega ambassador – Michael Schumacher. Funny coincidence is that he won it on the 21st of July of 2002 (exactly 33 years after the Neil Armstrong and Buzz Aldrin set foot on the Moon). To celebrate, Omega introduced (in 2003) a modified Speedmaster Day-Date with a carbon dial, red racing accents on the dial, checkered flag sub dial and an engraved case back. The engraving shows a signature of Michael Schumacher, ‘World Champion 2002’ and his name in full. 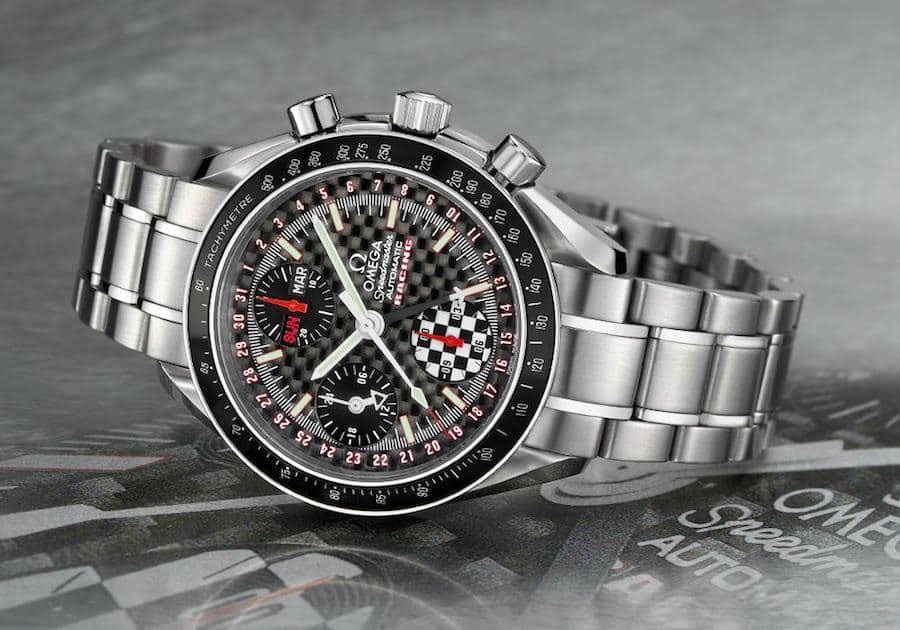 While this Speedmaster Day-Date ‘Schumacher’ LE originally has been delivered on a stainless steel bracelet (reference 1562 with reference 850 end pieces), we came across a neat looking version on a NATO strap. Speedmaster fan Gabe sent us some pictures of his Speedmaster Racing on a cool black nato strap, as can be seen below. 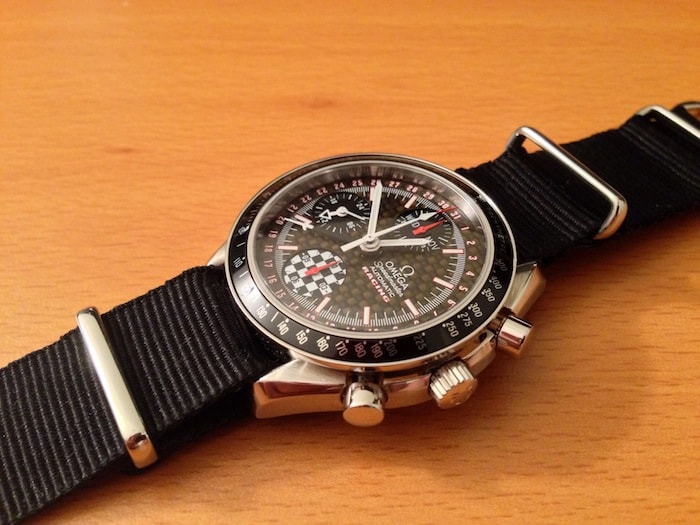 His picture also shows the carbon fiber dial in detail. The movement is caliber 1151 which is based on the ETA/Valjoux 7751 movement.  As you can see, the dial indicates the time, day, date, month, 24 hour indicator and has of course has a set of chronograph hands and sub dials. 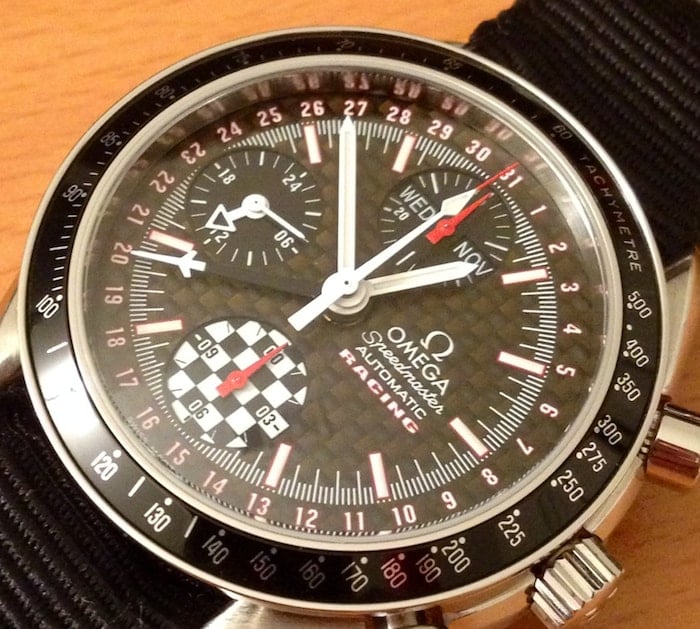 A case diameter of 39mm makes this watch a tad bit smaller than the Speedmaster Professional ‘Moonwatch’, which has a 42mm diameter. However, the watch appears to be bigger on the wrist.

Limited to 5,555 pieces only, this watch was introduced during the Baselworld show of 2003 (click here for the original announcement) and came with a special box and certification of authenticity. Below a photo I found on the eRelyx website. As you can see, the box and warranty card holder have the same look as the carbon fibre dial of the Speedmaster 3529.50. 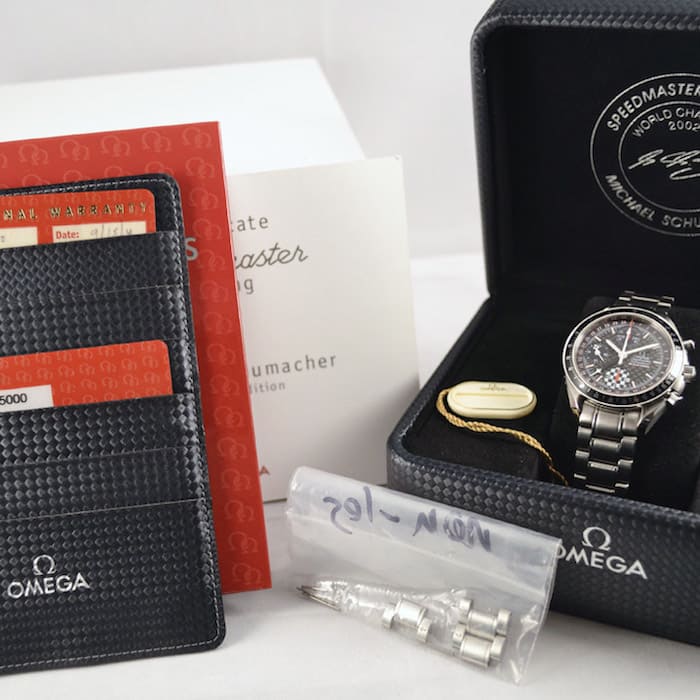 We all know what happened to Michael Schumacher, he moved from being an Omega ambassador to become an ambassador for Audemars Piguet (and pro golfer Rory McIlroy did it vice versa). Below a picture of Michael Schumacher wearing his Speedmaster Professional skeleton (a watch we’ve featured here). 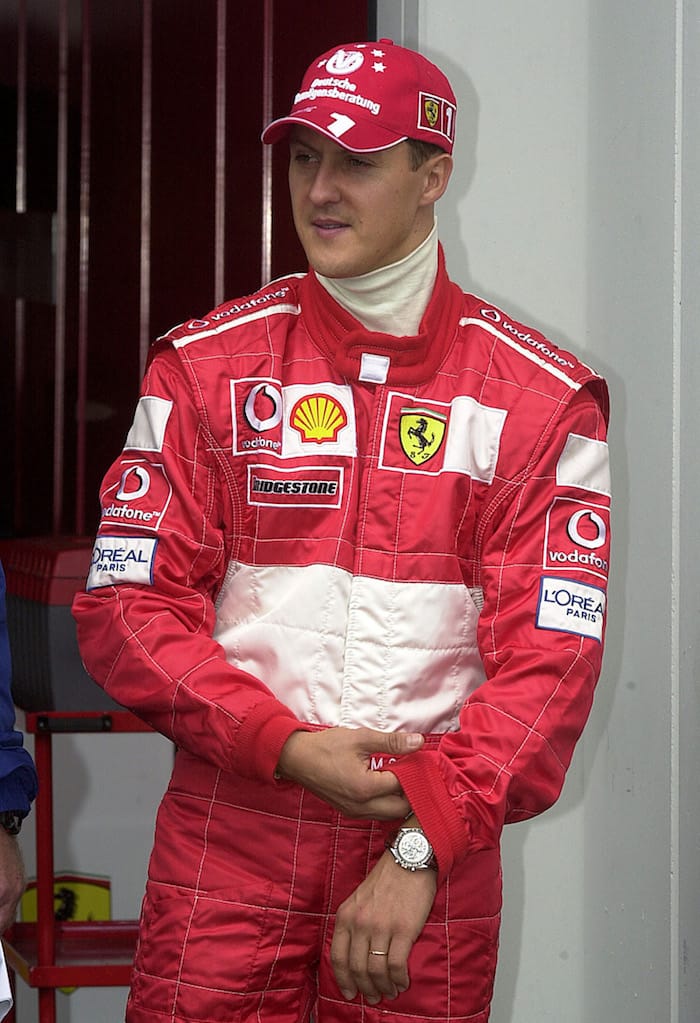 Although this particular Speedmaster Day-Date Racing has been sold out for quite a while now, you should be able to source a pre-owned version between 1700 and 2300 Euro.

More information about the Speedmaster Day-Date Racing can be found here.