The Speedmaster Schumacher (case number ST175.0032 or ref.3810.12.40) was – of course – being introduced by their (then) ambassador, Michael Schumacher. His brother – and also F1 car racer – Ralf Schumacher was also an Omega ambassador at that time. Later on, Omega introduced another Speedmaster that was a true ‘Schumacher’-edition, with his signature engraved on the back. 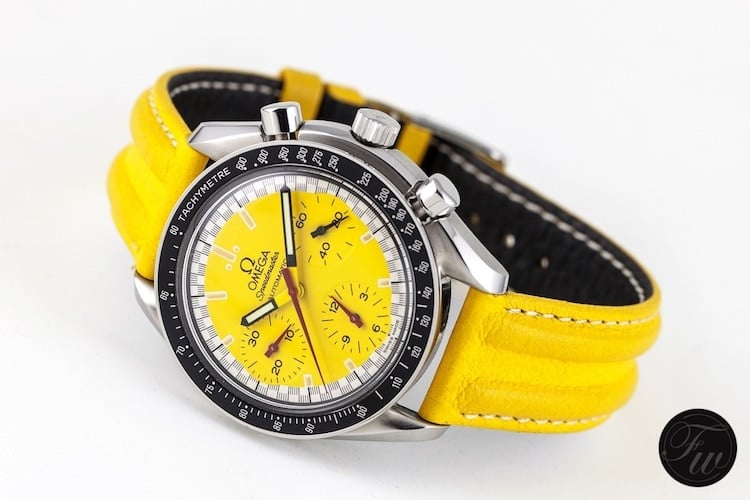 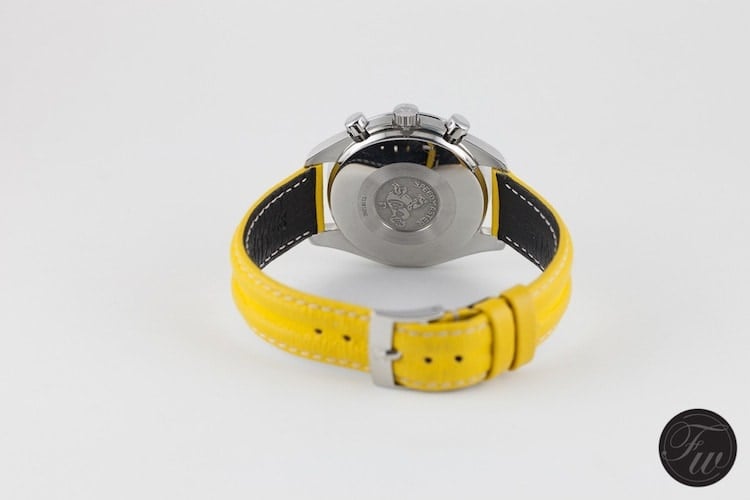 As you can see, this Speedmaster has the case and movement of the Speedmaster Reduced, but with a different dial and set of hands. Also, the strap is matching with the color of the dial. Omega released this Speedmaster Schumacher in red, yellow and blue. The watch was also available on a stainless steel bracelet (ref. 1469/811). 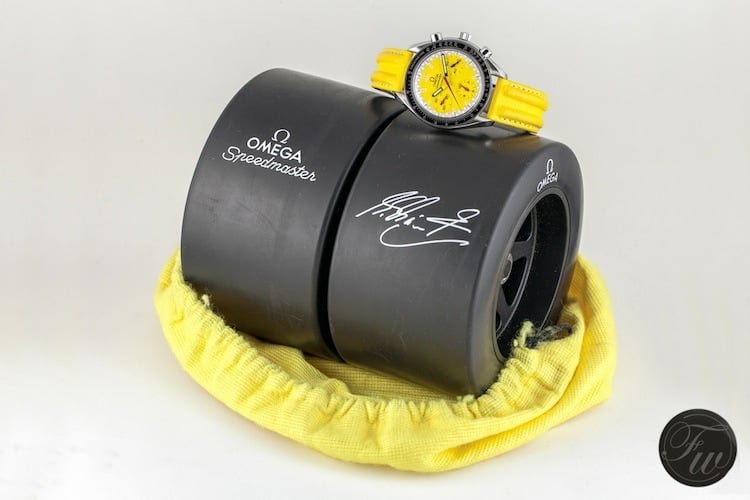 The blue version was re-released in 1997 as a special edition for the Championship Auto Racing Teams (CART) with a small CART logo on 6 o’clock and a CART logo on the box.

The box of the Speedmaster Schumacher was something really special. It resembled the wheels of a racing car which you had to move to the sides in order to get the watch out (see animation below). I remember that this box was highly appreciated amongst enthusiasts and collectors of Speedmasters. Nowadays, most of the boxes are pretty much the same except for some limited edition Speedmaster watches.

These coloured Speedmasters were no limited or special editions (except for the aforementioned CART edition) and didn’t come with any numbers engraved. The only number engraved on the case back is the serial number.

Inside, Omega used a modified ETA 2890-02 movement with a Dubois-Dépraz caliber 2020 chronograph module added to it. This also explains why the winding crown and chronograph pushers are not aligned. Omega renamed this movement to caliber 1141.

You can find these watches in the pre-owned market these days, for attractive prices. Although we don’t think this will be a much sought-after collectors item, you need at least one of the coloured editions if you are a Speedmaster collector!

The watch featured here was lend to us by Frank – friend of the show – and he decided to put this watch for sale. Please contact us if you are interested.

For Speedy Tuesday, we are always on the look-out for interesting Speedies. Rare models, Speedmasters with a story, your personal story or vintage models. Please keep sending them to us!

Hot Topics
Are You Still After An Omega × Swatch MoonSwatch?
118 comments
Introducing: The Oris Divers Sixty-Five Fratello Limited Edition
111 comments
Introducing: The New Seamaster Professional 300M 60 Years Of Bond — With A Special Animated Case Back
110 comments
Rolex Is Going Certified Pre-Owned
71 comments
Why Do We Cling To The Evergreens From Brands Like Rolex, Omega, JLC, And Cartier?
47 comments
Popular
Rolex Submariner – Historical Overview Of A Diving Legend
Robert-Jan Broer
22
(From The Archives) Shut Up & Read The Truth About Cartier Watches
George Cramer
21
Hands-On With The Seiko Prospex Dawn Grey Series
Robert-Jan Broer
12