Speedy Tuesday – The Speedmaster Mark 4.5 Financed By The Spy Who Loved Me

Nick, Speedmaster enthusiast and avid Speedy Tuesday reader, fell in love with Omega’s Speedmaster after he watched the 1969 moon landing as a teenager while being in France. When he turned 21, he received a ’71 Omega Speedmaster Professional ‘Moonwatch’ as a birthday gift from his dad.

Unfortunately, a couple of years later (1974) when Nick worked in the movie industry in the United Kingdom, the watch was stolen on the set of Intimate Reflections. While this movie – as Nick puts is – was an infinitely forgettable film, it did launch his career in the industry. Besides his watch, also his brand new Nikon F2 camera was stolen from the set. 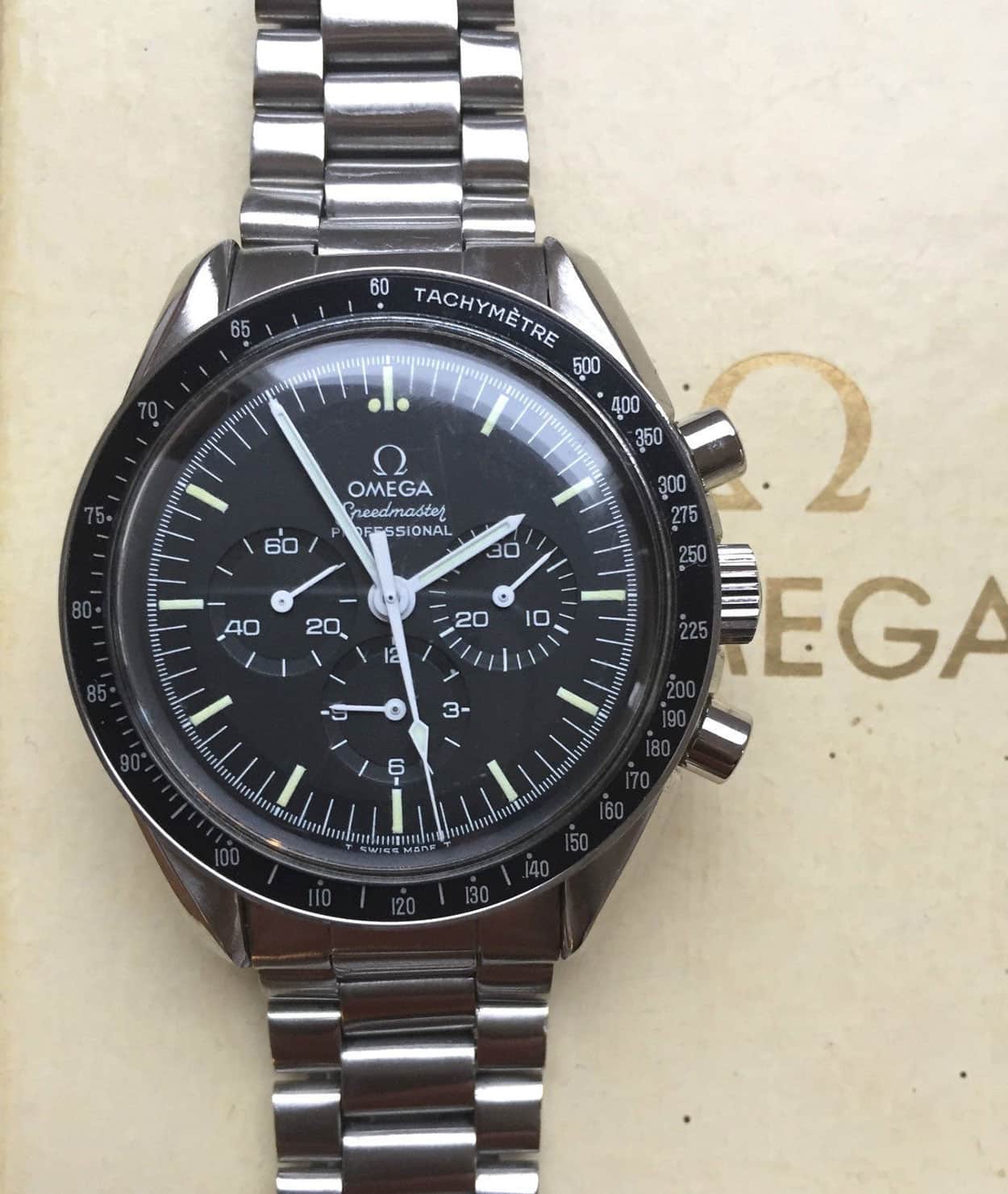 Nick explains that he had to take his Speedmaster watch off whilst loading a new roll of film using a Black Bag which had to be light-proof. The Black Bag was an essential item for a ‘Clapper-Loader’ (2nd. Camera Assistant) whereby you could transfer a new 400’/1,000′ roll of Eastmancolor film to and from a camera magazine ( i.e. Panavision or Arriflex camera). The exposed film being sent to the laboratories for processing into ‘the rushes/dailies’. The Black Bag was useful for location work, when access to a studio darkroom was impossible. However the hand-access sleeves of the black bag were very restrictive and as the film was highly sensitive to light, it was necessary to remove your watch (especially if it emitted a powerful ‘lume’ from the dial). On that day Nick didn’t have time to put the watch back on as he had to race back to the set to re-load the camera. It was only unattended for seconds-but that’s all it takes!

Although his first Moonwatch is now probably owned by someone who doesn’t know he is wearing a stolen watch, Nick keeps hope that the thief tosses and turns with guilt as it was very valuable to him. He doesn’t not have the serial number of the watch, otherwise we could do a ‘call’ among our readers to find it.

Nick was mortified as the Moonwatch he received from his father wasn’t insured. At that moment, he couldn’t afford to buy another one.

In 1976, when he worked on the James Bond film ‘The Spy Who Loved Me’ things changed though. It gave him the funds – although it was still a lot of money for a watch – to buy another Speedmaster. In 1977, he came across this Omega dealer in Tottenham, North London, when he suddenly noticed this beautiful Omega Speedmaster Mark 4.5 (with caliber 1045 movement) sitting in the window. He was captivated by the Speedmaster Mark 4.5 ref. 176.0012 and after he convinced his new bride that he really needed to buy this watch, it was his. 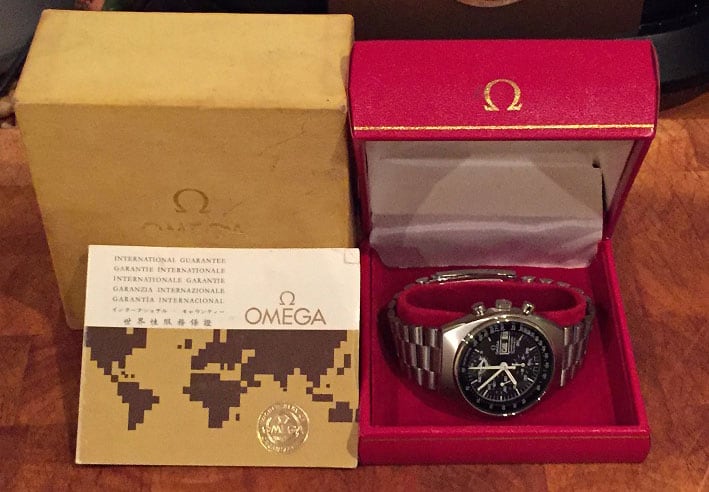 This Omega Speedmaster Mark 4.5 watch was treasured by Nick ever since and when the chronograph function started to play up last December, he decided the watch deserved an expensive spa. The watch has been completely overhauled and looks like it was just bought on that day in 1977 again. 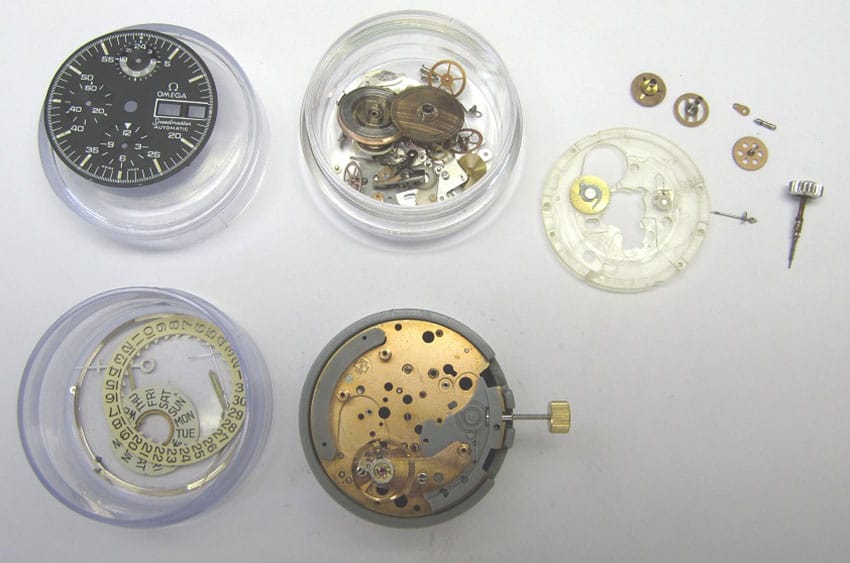 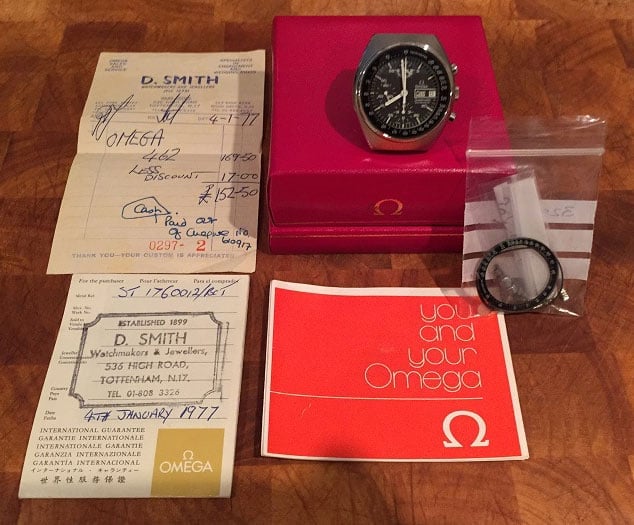 As we did a write-up on the Omega Speedmaster Mark 4.5 on several occasions (find one here for example) I won’t go into technical details of the watch. The Mark series started with the Mark II in 1969 and ended with the Mark V that was introduced in 1984. The Omega Speedmaster Mark 4.5 is actually an unofficial name, as it was just called Speedmaster Automatic. Obviously, the Mark 4.5 nick name was given to the watch due to the shape (Mark IV) of the watch and the Lemania 5100 movement (Mark V).

We would like to thank Nick for his remarkable story about his stolen Moonwatch and the ‘replacement’ Omega Speedmaster Mark 4.5 that he was able to buy due to the Spy Who Loved Me movie in 1976.