It’s time for another edition of Strap Check where we pair our watches with some sort of wrist-encompassing device. Today’s duo, however, is a bit different because the focus isn’t on a strap at all. It’s bracelet time with the Forstner Model J, and I’ve decided to link it to something controversial. Will the all-stainless Model J work with the silver bullet? Yes, it’s high time that the Tudor Black Bay Fifty-Eight 925 gets a bracelet.

The Tudor Black Bay Fifty-Eight 925 debuted in 2021, and to say it was unexpected would be an understatement. A 92.5% silver watch in 2021? Seemingly so and, unsurprisingly, the watch was met with polarizing opinion. A year later, people are positive about the dial color and bezel, but there are questions about the case material. Some have encountered tarnishing despite Tudor’s anti-tarnishing claims. Others, like me, have experienced a weirdly unique watch from a huge brand without issue. I bought mine on a leather strap and I’ve shown the watch on a wide variety of interesting straps. Color works for this watch, but some have still resisted buying it because of one omission. The watch isn’t available on a bracelet. 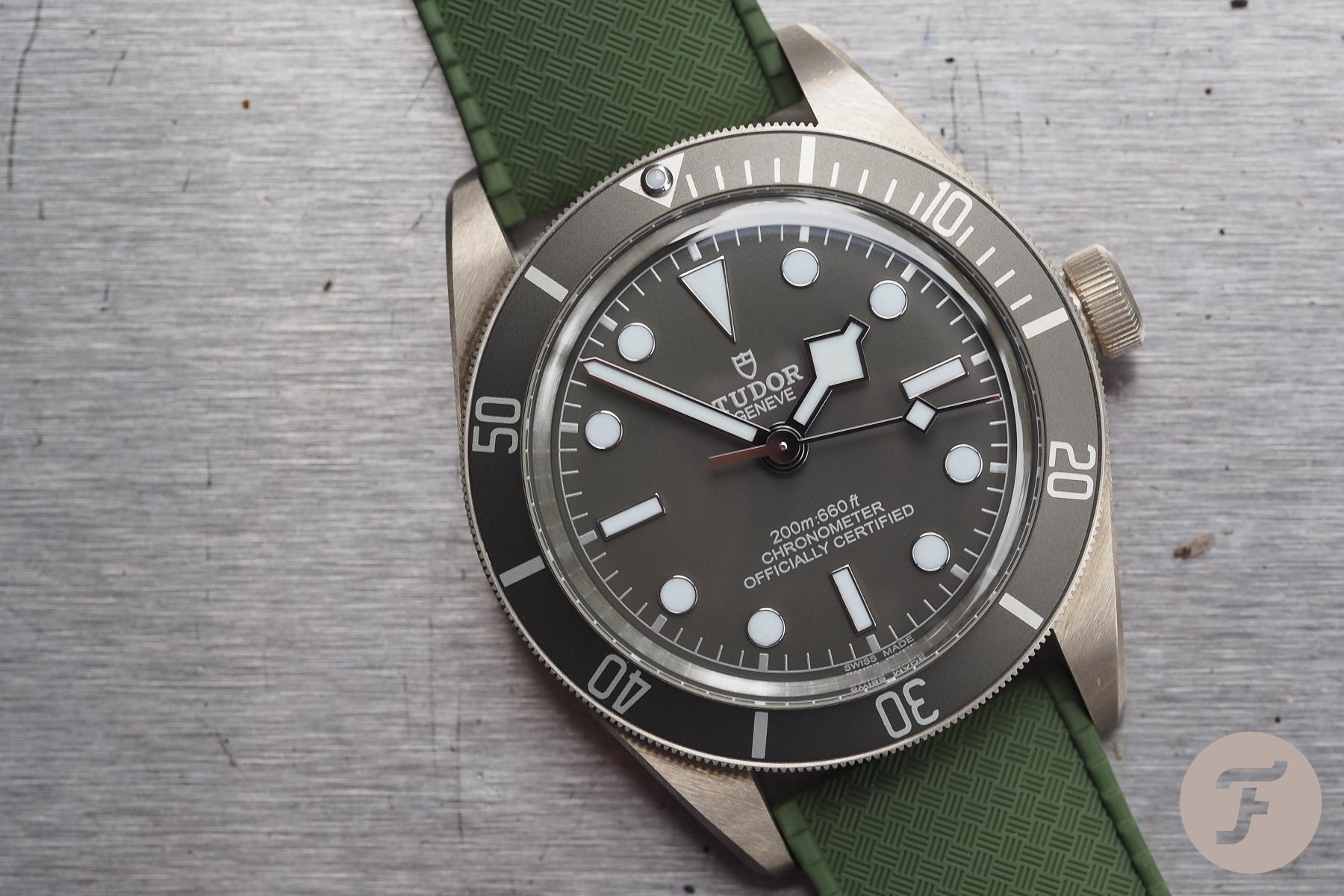 A silver watch without a bracelet

To be fair, silver bracelets exist as normal jewelry bracelets. On a tightly fitting watch, though, I’m not sure if it would work. Precious metals — gold or silver — tend to feel a bit “tacky” because they conduct so well. Plus, I’m guessing that a multi-link addition to the watch would ultimately tarnish due to so much skin contact. So, what to do with the Tudor Black Bay Fifty-Eight 925? This is where Forstner comes in, although this was a bit accidental.

I wasn’t thinking of my Tudor Black Back Fifty-Eight 925 when the Model J debuted earlier this year. Forstner designed a Jubilee-style bracelet for the Black Bay and that included both the Fifty-Eight and 41mm models. I thought, “Good for those folks who own a steel model — this addition just makes their watch that much more versatile.” For whatever reason, I didn’t think about my silver Black Bay because, well, the bracelet is made of stainless steel. 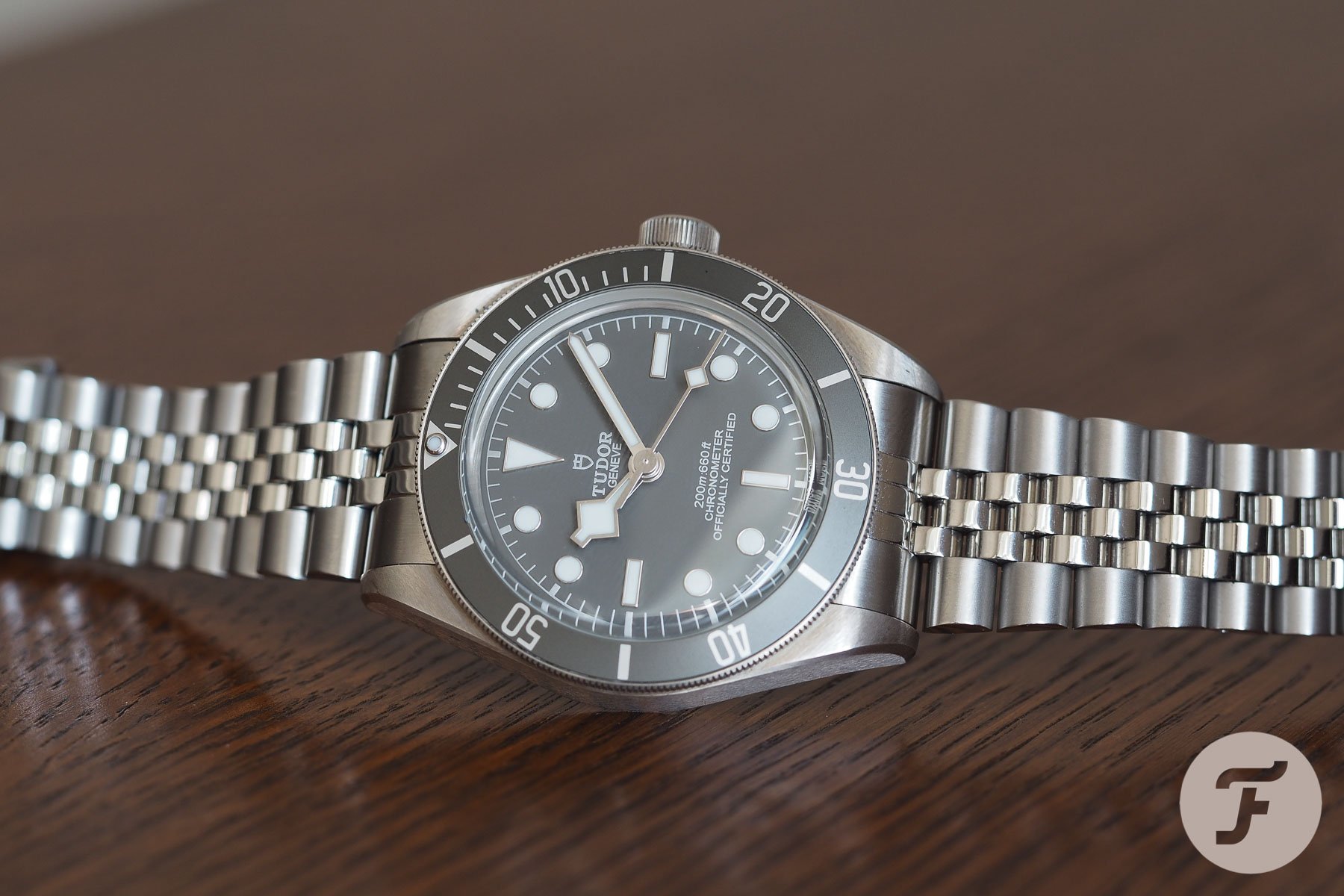 As I said, my Tudor Black Back Fifty-Eight 925 has aged well. It is certainly not as white and shiny as it was on day one, but the tell-tale dark spots haven’t appeared. After a year of ownership and interaction with salt water, chlorine, sweat, and sunblock, I’ve assumed that things have normalized. It was after a recent trip to Italy where I changed between a Tropic-style and a canvas strap that I thought a bracelet might make a nice option. It was back to the Forstner Model J.

Full disclosure here: I shot an email to Forstner and asked if anyone had paired the Tudor Black Back Fifty-Eight 925 with their Model J. Apparently not! Within days (seriously, Forstner must have an in with the international postal system), the Model J arrived, and it was time to see if it would work. 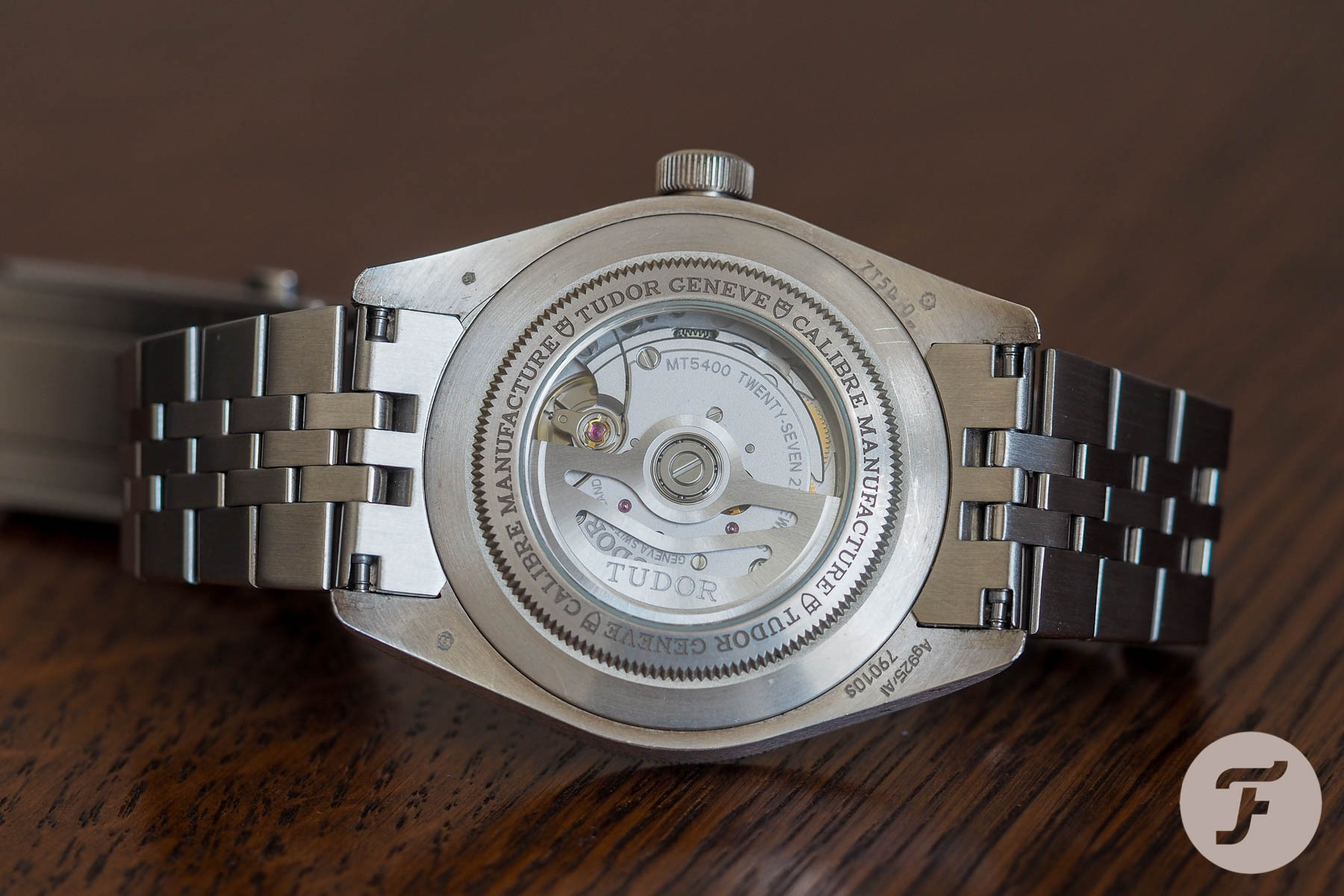 First things first, the Model J isn’t like the other Forstner bracelets I own. Whereas the Komfit and the Klip are purposely light and rickety, the Model J is substantial. It’s not overly heavy and uncomfortable, but it has a milled clasp and links with screws. Plus, the end links are solid and well made. I decided to throw the bracelet onto my watch, and it was relatively easy. I say “relatively” because the end links did require my spring-bar tool to push them down and into the holes.

Once the bracelet was locked in, I set about sizing the bracelet. Forstner ships a screwdriver with the bracelet and it’s usable. It’s not amazing, but it does the job. Others have commented that the screws can be tough to remove, and I did notice that some were truly locked into their threads. Plus, the threads are deep! Anyhow, it feels like quality. I took out three links on the head side and four on the bottom side and was good to go. Would this work? 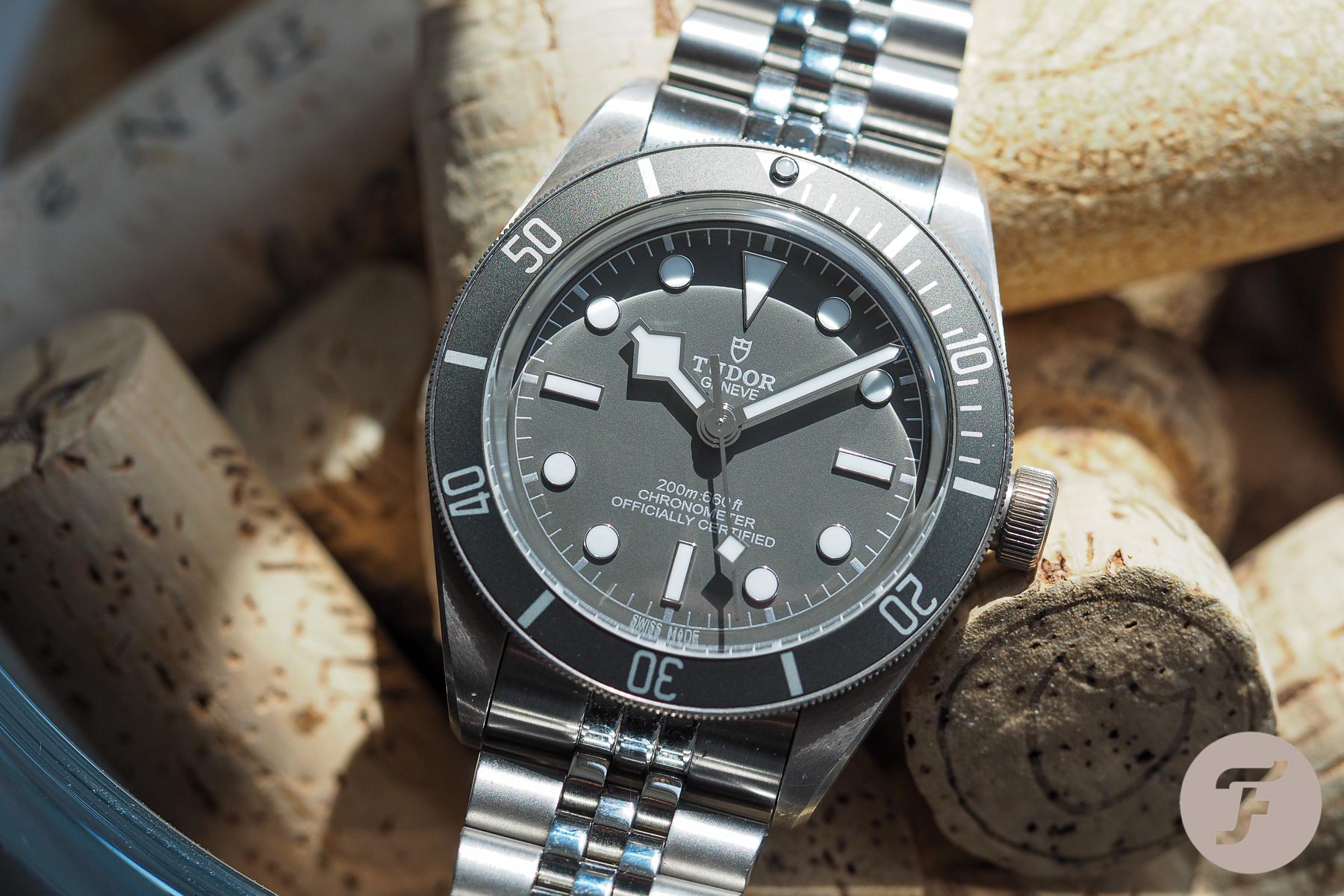 Prepping the Tudor case for a closer match

The Tudor Black Back Fifty-Eight 925 case does darken, but there’s an easy trick. Just grab a white pencil eraser and scrub the case for a minute or so. It truly lightens things up and it was the perfect move to help it work with the Model J. So, what is the result, and does this oddball watch work with the bracelet? In a word, yes. However, it’s not perfect.

For the nitpickers out there  — and I’m usually one of them — the Black Bay case color is a slightly different tone than the Model J. The watch case, despite darkening a bit is slightly “whiter” than the darker stainless steel, but it’s all within the same family. Furthermore, the combo comes together in almost every lighting situation. I’ve worn this watch everywhere for the past few weeks, and it got to a point where I no longer questioned whether it worked or not. 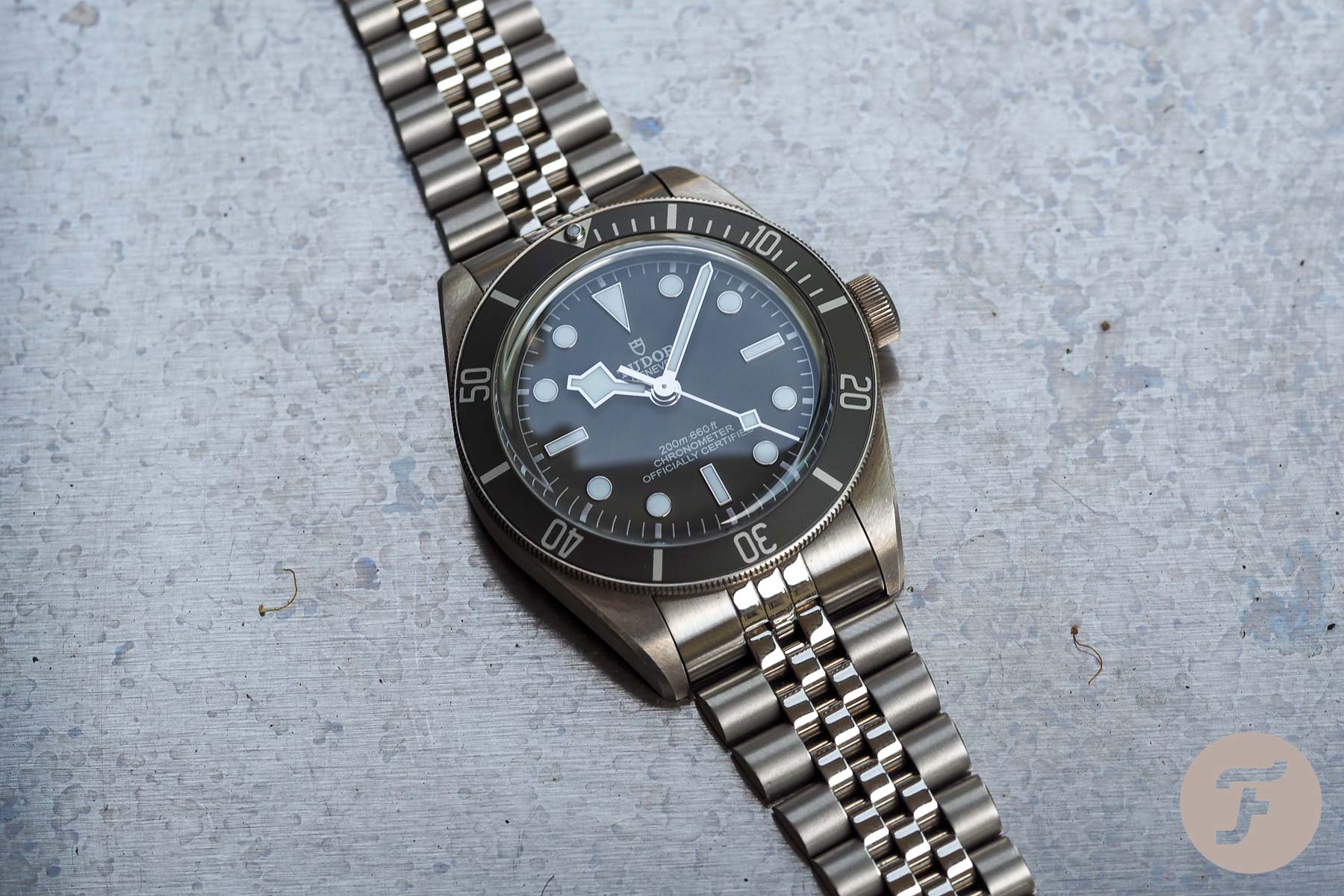 Is it a perfect match? No, but it’s darn good

The other detail that may disrupt the obsessives is the difference between the brushed Black Bay case flanks and polished bracelet sides. There’s a difference, but the bracelet is thin enough that shadows and, in my case, wrist hair help to block a lot of the contrast. Perhaps it’s another reminder that the Model J isn’t an OEM accessory, but I don’t see it as a glaring issue.

Some other notes are worth mentioning about the Black Bay Fifty-Eight 925 and Model J. Firstly, the end links fit without slop. In fact, as stated above, I had to use a spring bar tool to ensure that the bars were fully seated. The end links themselves fit nicely but do sit slightly below the lugs. That means they’re not completely flush with the case. Another small detail is that the brushing on the end link is not in the same pattern or style as the lugs. For good measure, I checked a Rolex that has never been polished and that mismatch is also present. 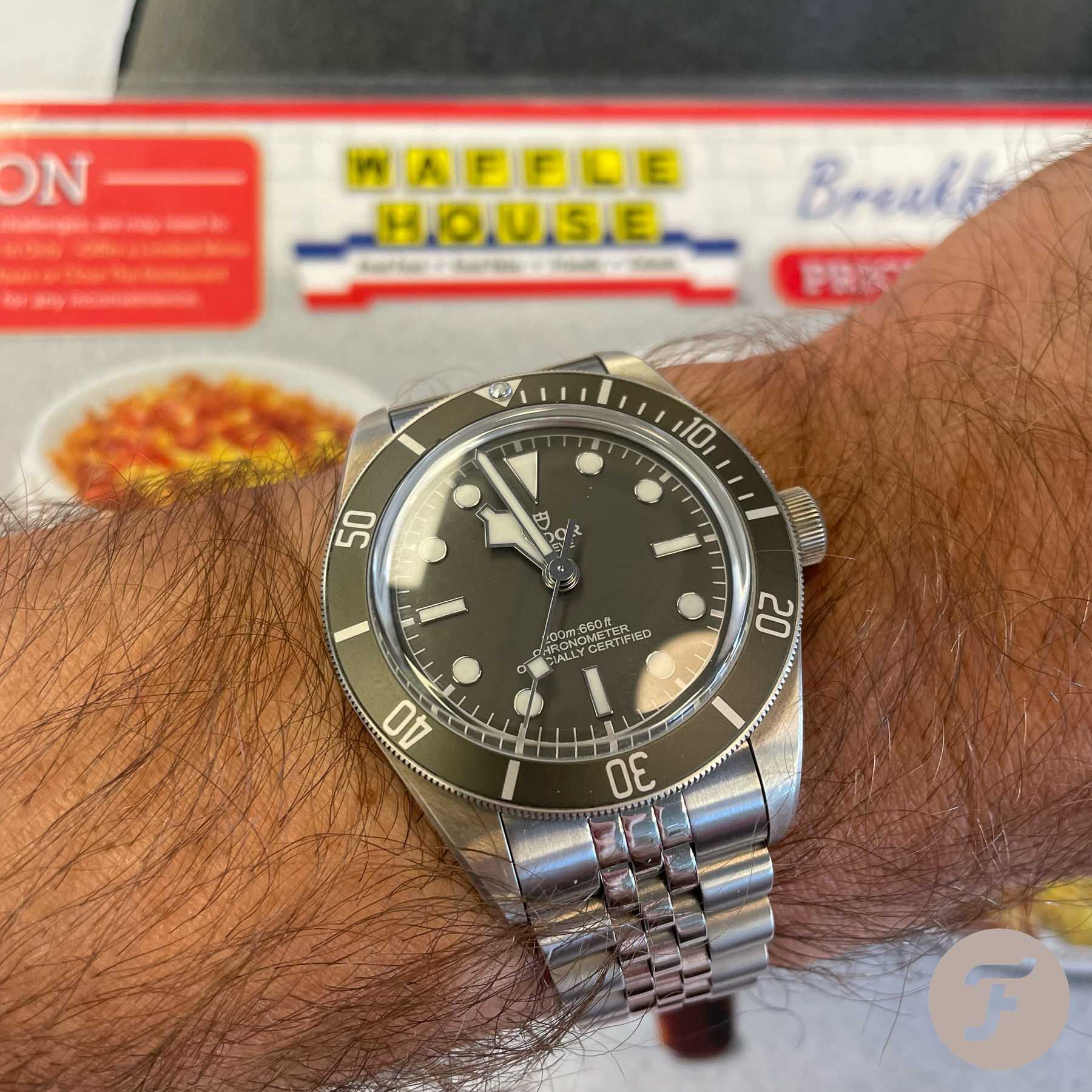 Putting the Model J to the test on a trip

It’s easy to receive something in the mail, experience initial excitement, and then watch the enthusiasm wane precipitously. With the Model J, I experienced the first two and was determined to see if my interest would disappear after a short period. To put the combo to the test, I put the Tudor and the Forstner to the ultimate test by making the combo my “only watch” for a one-week trip to Atlanta (including a trip to Waffle House!).  On this trip, I encountered long days in a conference hall, serious humidity (read: wrist swell), and then a bit of play on the weekend, including some pool time. 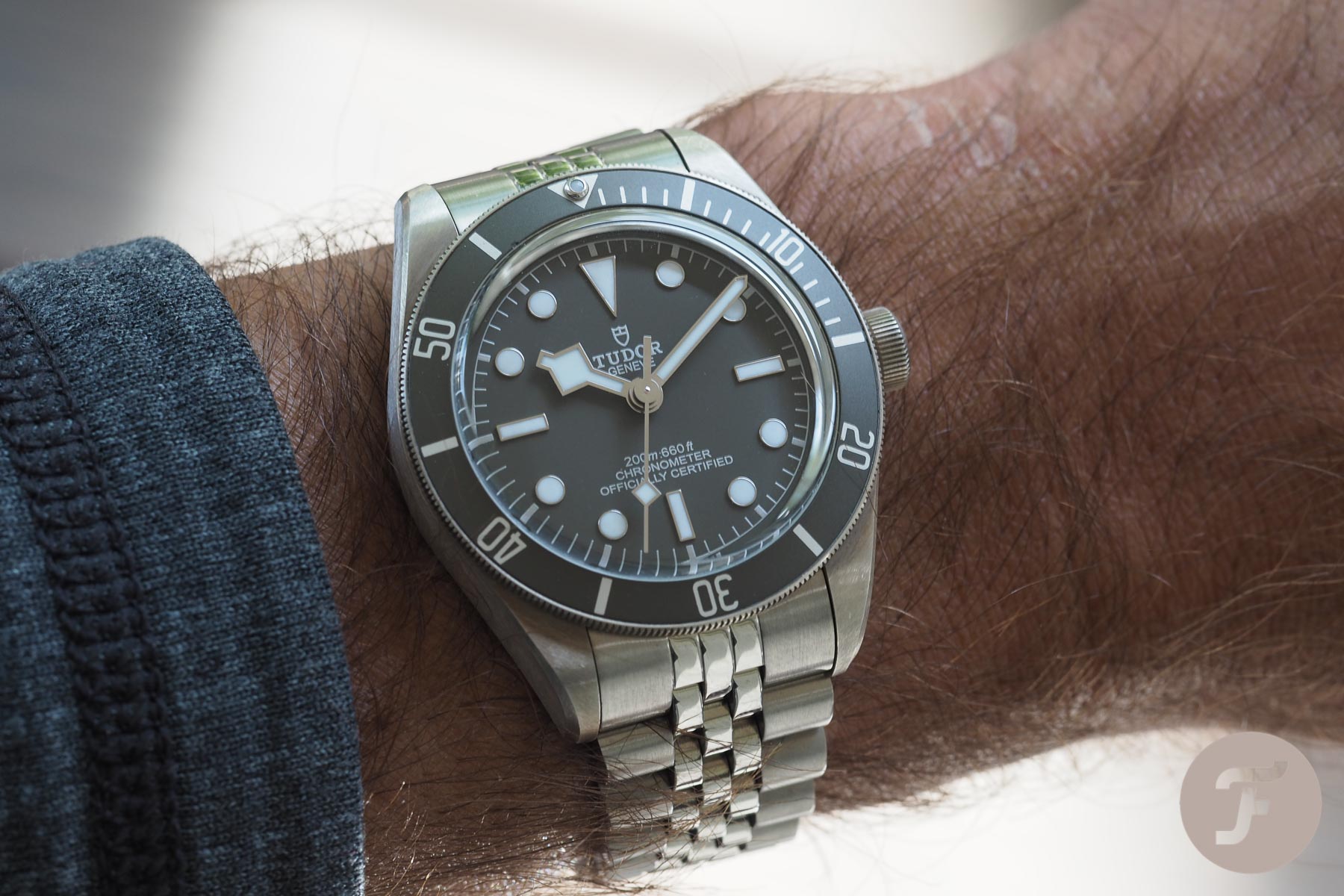 The verdict was profoundly positive. I didn’t notice the watch on my wrist and that says a lot about this $165 bracelet. It wore really well, didn’t pull hair, and is very nicely finished. I looked down at my wrist a lot and there was never a point where I thought, “This doesn’t work” or “It looks like a mismatch.” In fact, it made me like the watch a whole lot more. These days, I like traveling with a less expensive watch. Maybe I’m a sucker for all the street-theft articles, but I see no reason to take a chance. The only negative about the Model J is that it really looks like a Jubilee and, as a result, I did catch a few glances.

The Model O has arrived…will it work?

One final note is that during my one-week trip to the USA, Forstner released its new “Model O,” which is a take on the familiar Oyster bracelet. It has also been designed to work with the Black Bay series and should provide an answer to those who either don’t own the OEM bracelet or dislike its riveted design. I had a bit of a moment when I saw this because I figured everyone would jump to that option. I may still try it, but I do think that the tonal difference will be more noticeable on that combo. The polished Model J links break up what would be an all-matte design and trick the eye a bit. Still, it just might be worth a try for $175. 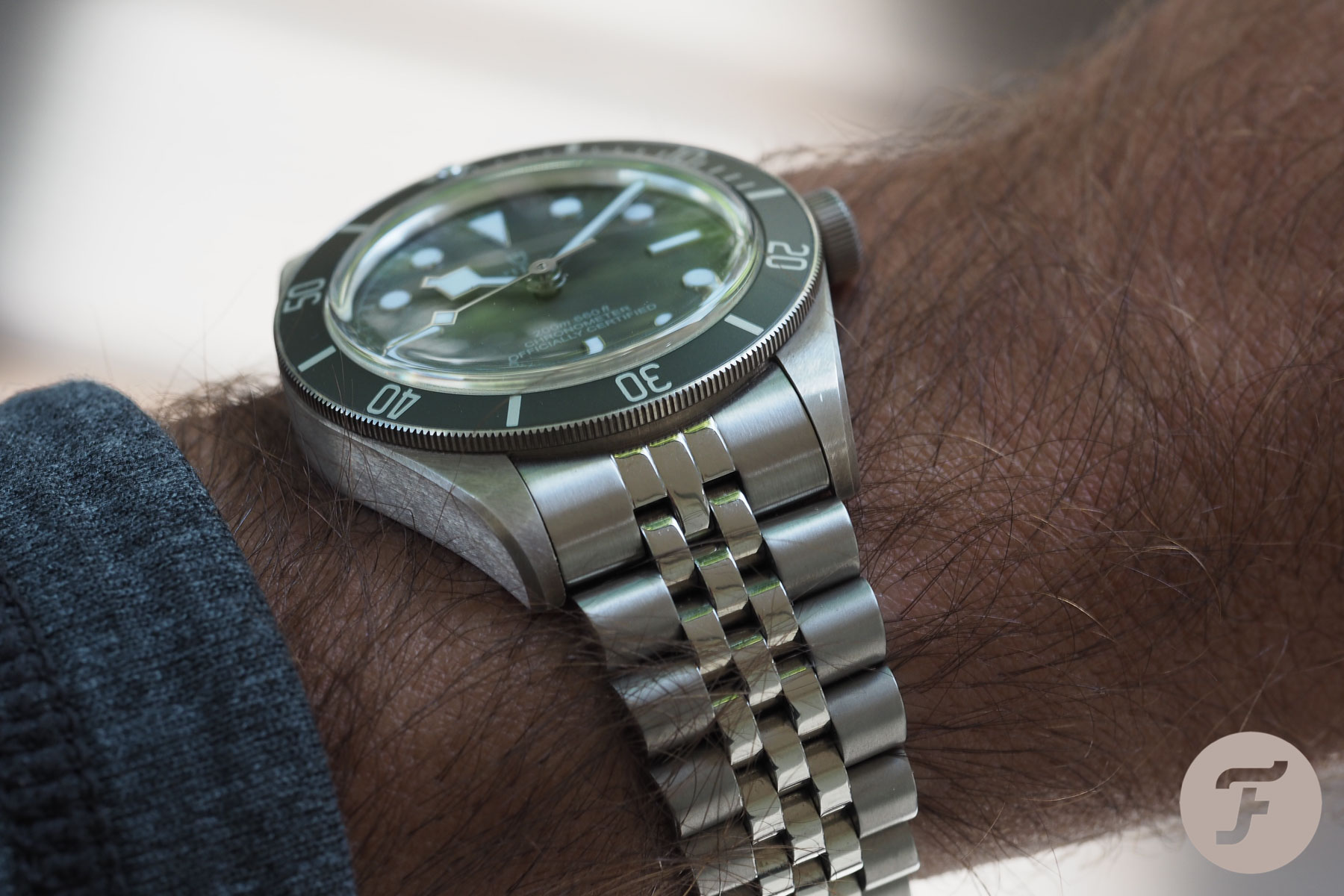 During one year of ownership, the Tudor Black Bay Fifty-Eight 925 has become a real favorite. I love the colors and the overall design is about as classic as it gets (I mean, it should be). The watch is nice, fits well, and is upscale but relatively low-risk during travel. While owning the Tudor, I’ve paired it with all sorts of straps, which has made it a fantastic partner for vacations and semi-casual business trips. What I have missed, though, is a good bracelet option. Even though a Submariner-style watch is typically on an Oyster, the Jubilee works here and adds just a touch of formality to the package. The $165 Model J isn’t a perfect pairing, but it is suitable and, crucially, should lead to more wearing of this weirdly cool watch. It also might lead others who must have a bracelet to consider purchasing this Tudor.

For more information on the Model J and the new Model O, visit Forstner’s official website.