Welcome to the third and final Wild Card round. Yes, this competition has spiraled into something much WILDER than we could ever have imagined, but we’ve got to roll with the punches and listen to the community. With the shadowy Kraken Kartel pulling the strings from 30,000 leagues beneath the sea, the Fratello Summer Splash has all the creative license it needs to grow in any way its participants demand. And so now we present the remainder of the Fratelli’s picks. I hope you enjoy sifting through them and picking your favorite as much as I did assembling the list.

As with the previous two Wild Card rounds, the top two will go through to the Wild Card Decider, which will be published following the second of the regular Semi-Finals in which we’ll see two of the final four Fratello staff writers duke it out for a spot in the three-way final. Who will take the crown? At this point in proceedings, it’s anyone’s guess… 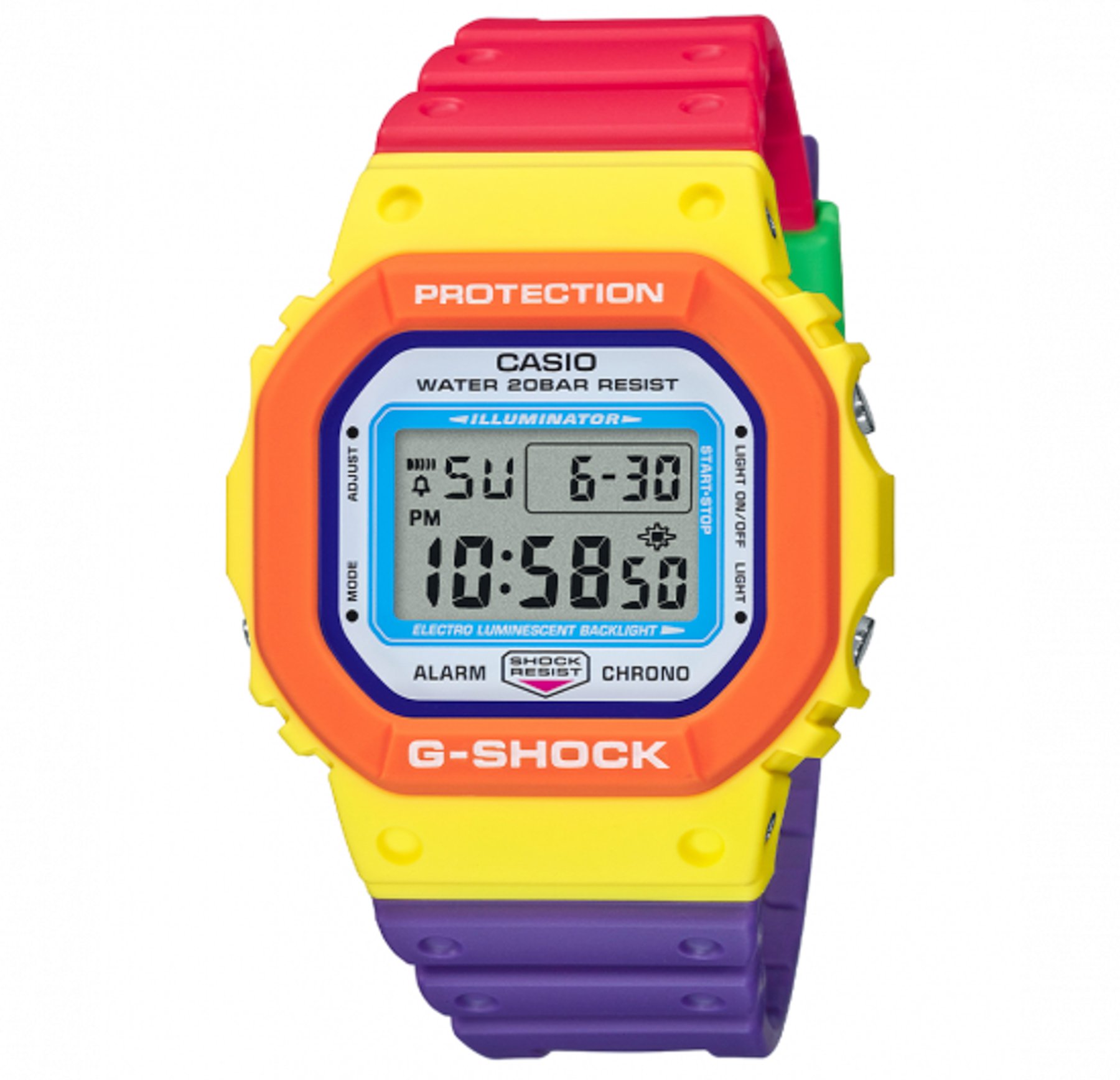 You’ll find this reference when searching for “g-shock rainbow”, alongside a bunch of other multicolored G-shocks. I don’t think this reference is the most interesting, or capable, of the bunch. And I’ll match Nuddy and eat my hats if this one wins. But I still thought I’d take a few moments to nominate it properly — because to me this is the ultimate watch to play in.

There is no way I care if I bash this on a rock chasing my kid around the garden. I might lose it if I take it off next to a pile of Duplo. It costs around €120. This is the choice you make if your perfect summer revolves around the family, and you want to turn the borderline obsessive hobby you nurture into something which is inviting and relatable for your wee ones. Hell, if you play your cards right it may even become the gateway drug that sees the two of you wearing matching straps a few more years down the road.

Rob: lovely choice, Erik(tig). Unfortunately, this one has been discontinued so you are immediately disqualified. However, your write-up and passion for the piece were enough to warrant inclusion in case it inspires any of the Fratelli to pick one up on the pre-loved market. It’s an absolute stunner, after all. 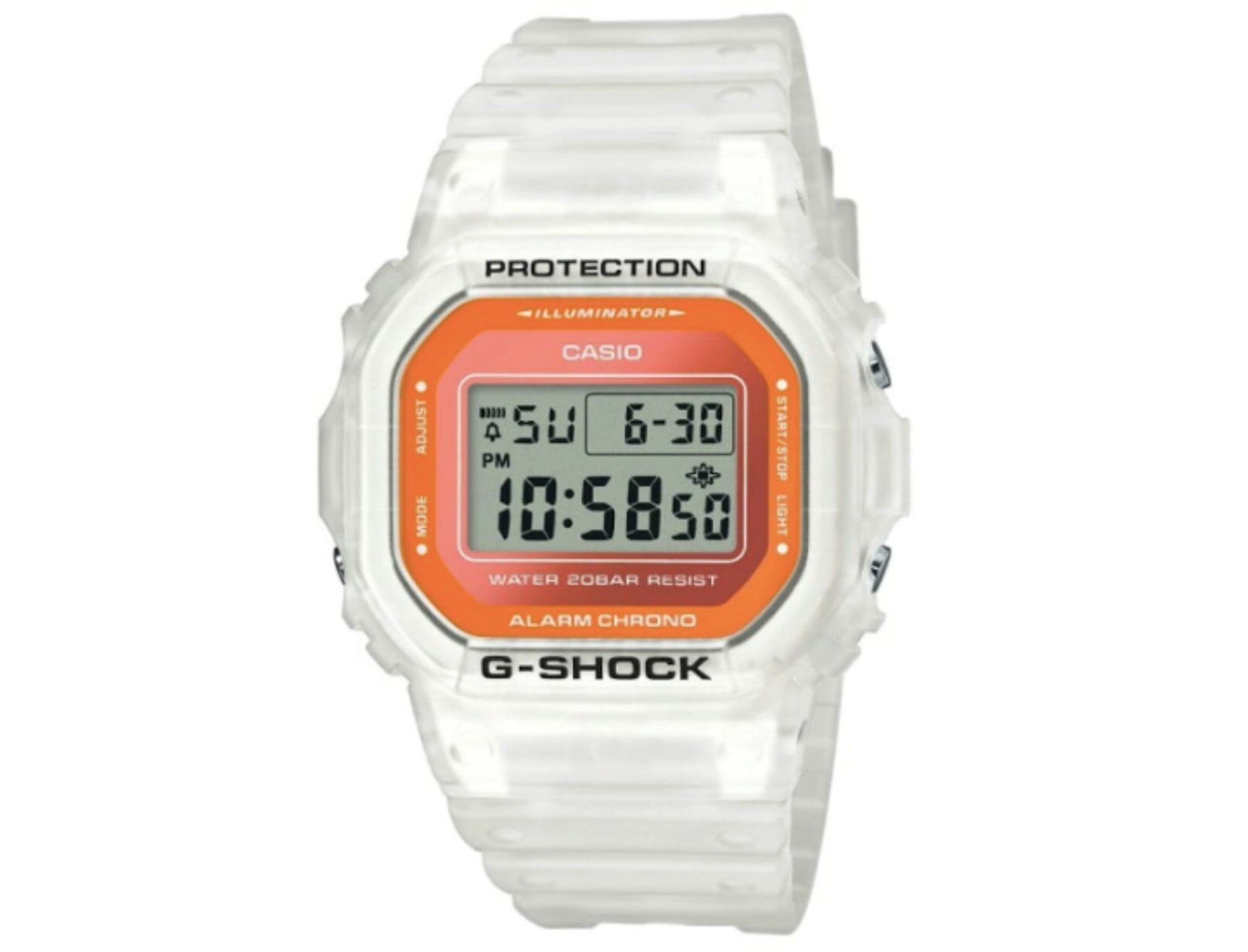 That’s a slap with an orange glove. Splash right there…

Brilliant in every way, shape, or form. And an absolute bargain for all that fun. 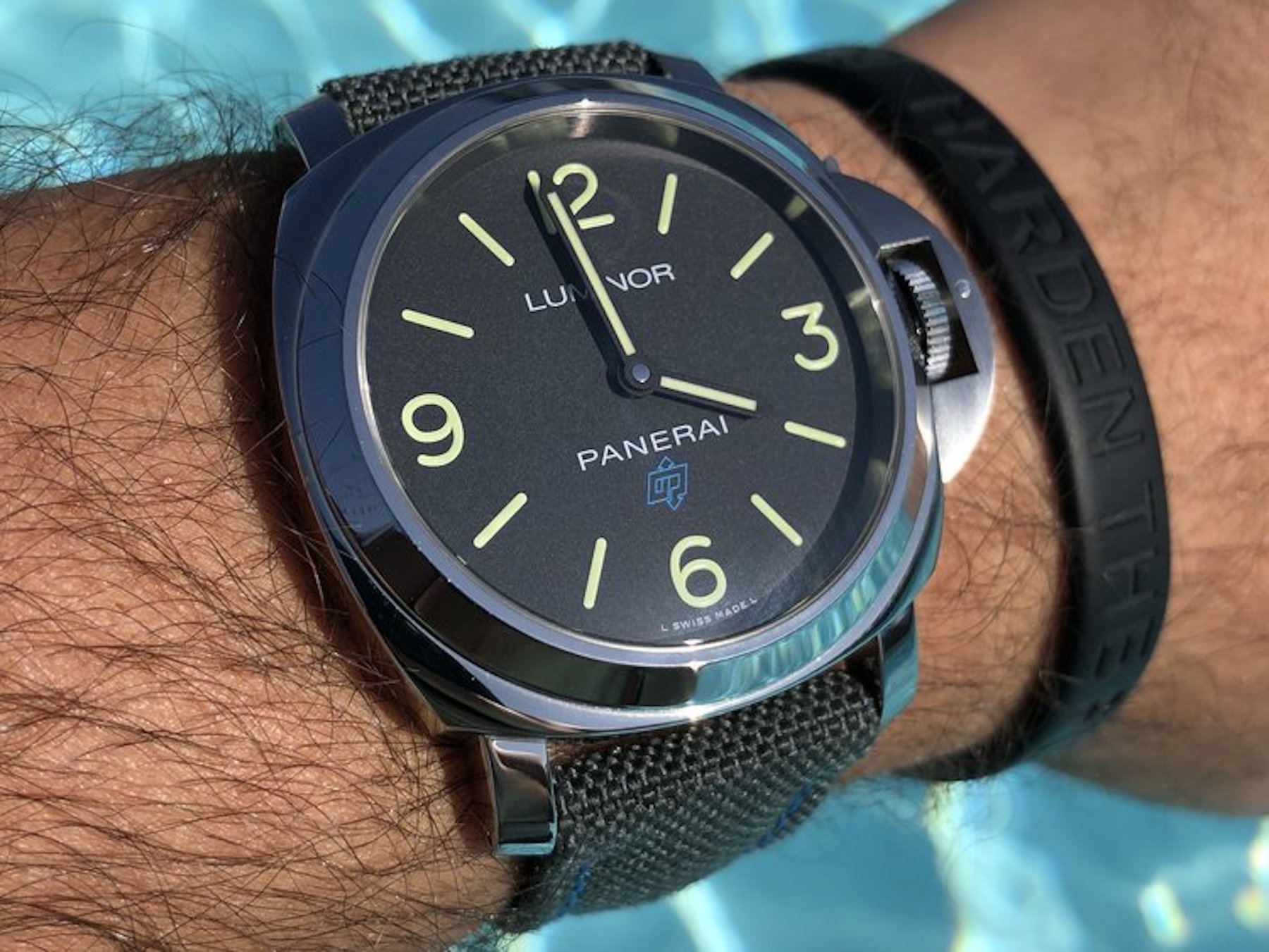 The PAM00774 is the best summer watch in the competition. Its omission from the writers’ nominations is nothing short of scandalous. It does everything needed with ease and just looks so damn good doing it. If ever a watch had sprezzatura (ask Lex if you don’t know what that is), this is it. Only the Italians could design such an effortlessly beautiful timepiece.

Now many of you may be thinking “Panerai? You are joking, right? Did they not go out of fashion in the aughts? Does that band not put ETA movements in its watches and try to claim them as in-house?” You might also be thinking, “44mm? That’s far too big for my wrist.”

Those of you with a bit more knowledge of watches than the average bear (or those of you that can be bothered to visit the excellent Panerai website) are nodding sagely at the choice of a two-hander but scoffing at its paltry 100m water resistance rating and lack of a sandwich dial. You might also be are bewildered by spring bars instead of screw-in alternatives. 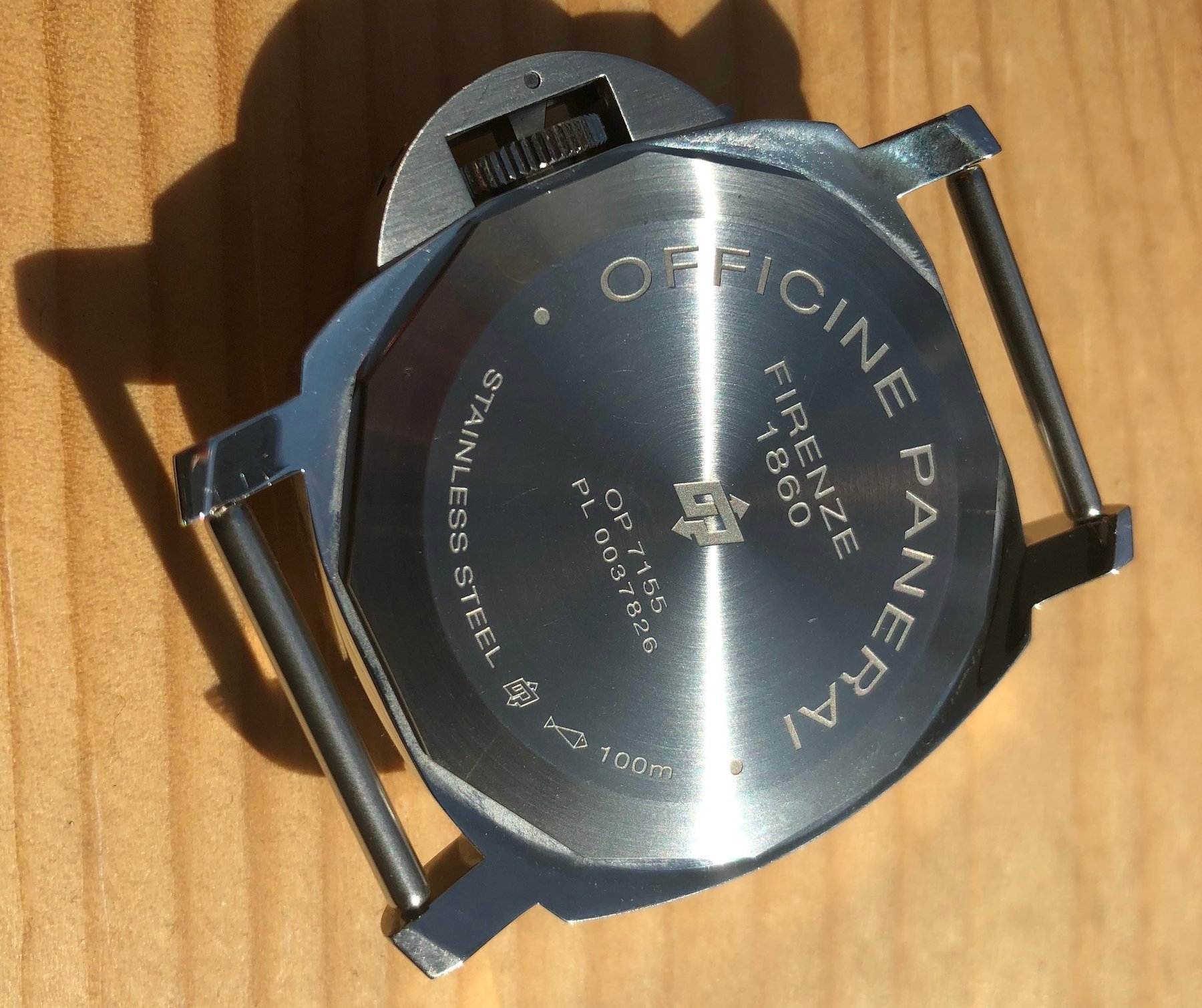 Now not very much more cheddar will snag you the full-fat 8-day model with a delicious (and nutritious) sandwich dial, 300m water resistance, and screw in strap bars (or even small seconds at 9 if you are a philistine). But that would be over budget. This beauty just sneaks into consideration at €4,900.

That still buys you a 3-day hand-wound P.6000 in-house movement (yes: it actually is in-house, if that matters to you — but maybe we should have that fact-checked by our not so diligent steward Bobsled Bobby)* with all the modern bells and whistles. More importantly, you get the classic Pre-Vendome Bettarini 44mm case in polished steel with the iconic crown guard. And let’s be clear, unlike all of the other watches in the competition the Luminor is a bona fide Icon. Anyone who knows about watches will spot it on your wrist from 20 yards away (or the other side of a table with the crown guard poking out from under your cuff). It is just beautiful and unmistakable. It also wears surprisingly well for its size and is more compact than you would think. Smaller wrists aren’t entirely dwarfed, albeit there is no escaping that this is a large watch.

* Bobsled Bobby: Meh, the language used by the brand is indicatively vague (words like “created” rather than “manufacture” tend to raise an eyebrow). At worst, I’d guess it’s probably made by Valfleurier and smuggled into the Panerai facility under the cover of darkness, but it’s at least proprietary and I like it so I’m going to let it slide… **

** Said as he quietly hiccoughs and closes the desk drawer, brimful with empty bottles of rum and regret… 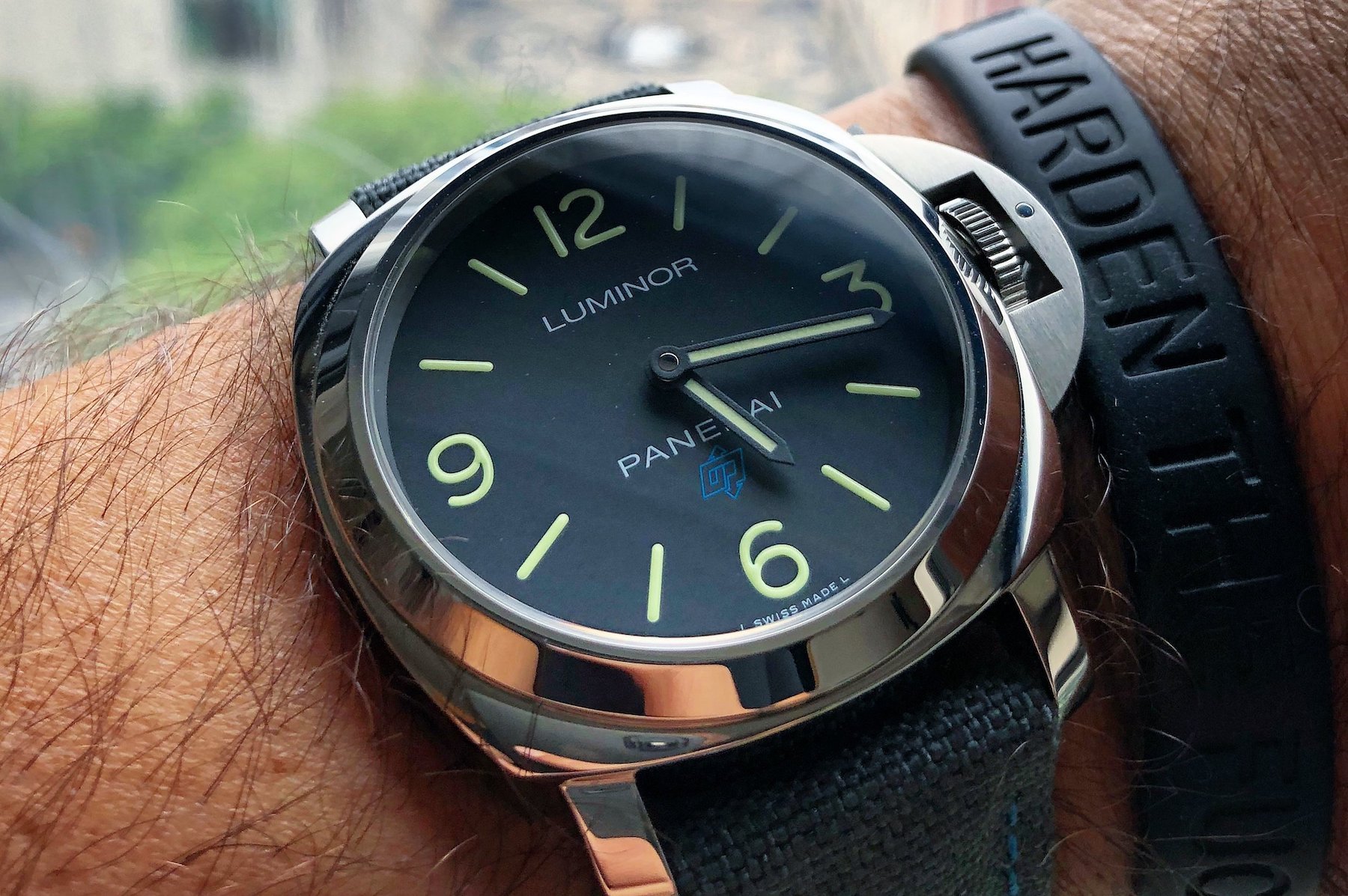 Wow. Awkward. Anyway, the Panerai PAM00774 isn’t just pretty though. Both the modern movement and the substantial steel case can take the hits. That crown guard is functional, not just an aesthetic gimmick — and endless fun to play with. This is by design a rugged tool watch originally conceived for military applications. Its ancestors were worn by crazy Italian Navy frogmen who rode torpedoes to attach explosives to enemy warships! Panerai is so confident in its robustness that you get an 8-year warranty. Eat that Omega and Tudor!

It is also more flexible than any other piece in the competition. This reference comes with a summer-friendly canvas strap and also a high-quality rubber dive strap. So without cheating (there’s a novel idea), this watch can swap up straps even if it isn’t as convenient as using screw-in bars.

Even better, there is a world of aftermarket straps available for every occasion and every outfit since the megalomaniacal Ernst Stavro Nuddsfeld has opened the door to consider that with his second-round Aquadive article rule change***. The Luminor is the original strap monster. It spawned an entire industry. On the rubber, it is ready for action at the beach or poolside frolics (or indeed torpedo riding). On the canvas, it looks great with all sorts of summer casual wear. Put this on a glossy alligator affair though and it won’t look out of place at a Michelin starred restaurant. It dresses up or down with equal aplomb and you can match with it any strap color in almost any material you can think of.

*** There are no rules banning sideways thinking.****

**** Yelled from an old, Victorian-style urinal 30,000 leagues beneath the sea in the Kraken Kartel’s secret lair. 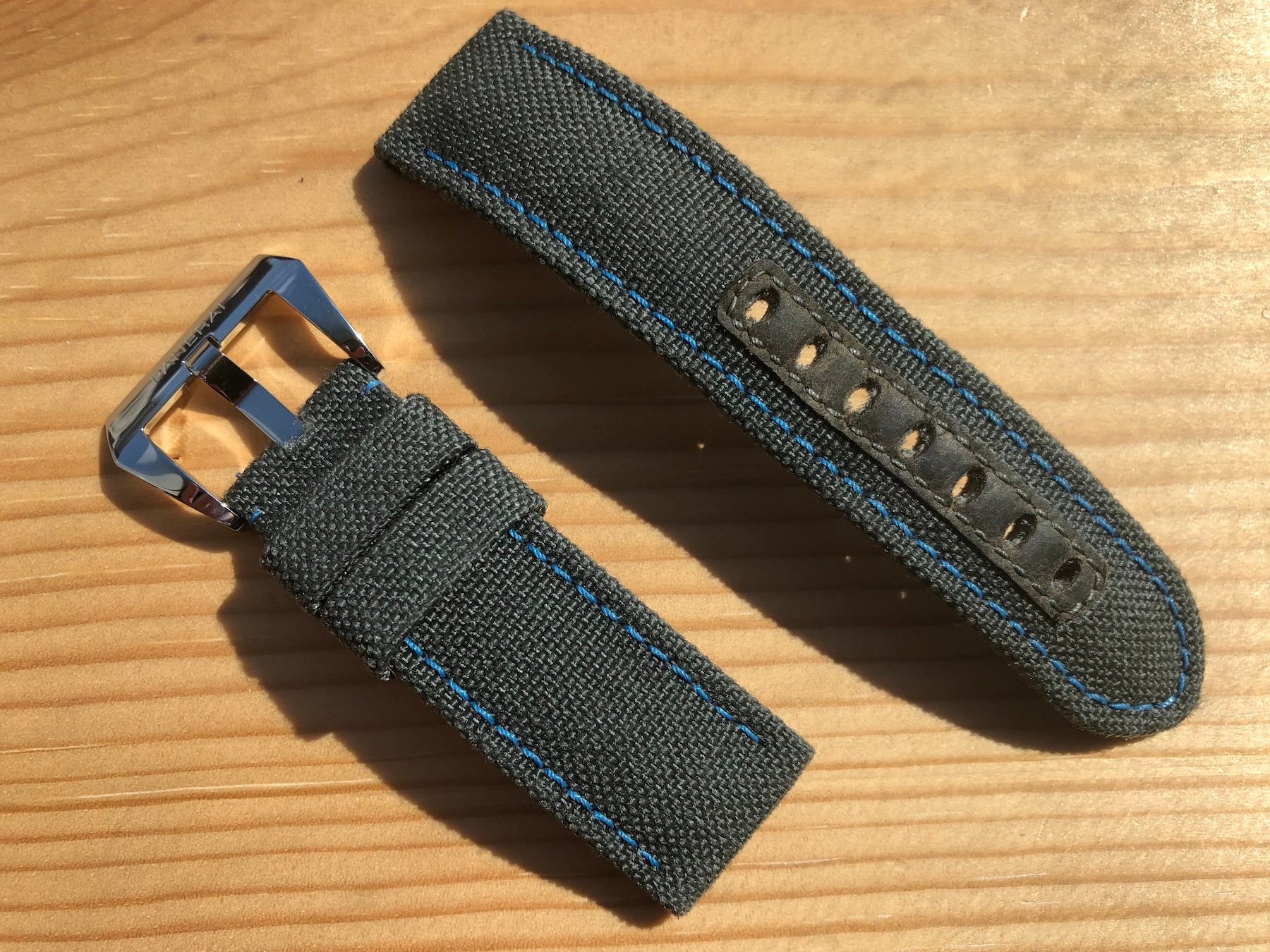 I hope he does up his fly for once… Being its raison d’etre, legibility is legendary day or night (and underwater of course). Mega contrast and insane lume combine to make it very easy to read (even after a few too many Pina Coladas at the poolside bar have blurred things somewhat). After soaking up the summer UV all day it will also glow like a torch all night at the club. Panerai claims to have invented lume and the watch is named after its second generation of improved luminous paint.

The icing on the cake is that this piece has real history and heritage that nothing else in the competition can match. It can trace its lineage back to long before the others were a twinkle in their designer’s eye. It even has a Rolex connection as early Panerai models were made by The Crown. If heritage is important to you, it wins hands down.

But the real reason that this watch should win is that it just looks so timelessly and effortlessly good while doing what you need a summer watch to do with consummate ease (well, apart from count the seconds, accurately time stuff, or track a second time zone — but we have smartphones for that!). With a nice selection of straps, it can do its job in any circumstance, anywhere and with any outfit you like.

Sadly it is a sign of Panerai’s fall from grace in recent times that neither the Radiomir Black Seal nor Luminor Base appeared in any of the Fratello Writers’ nominations. Now that this iconic beauty has managed to sneak in via the Wild Card round, though, like Ivanisevic at Wimbledon in 2001 it’s time to go for glory. So cast off your prejudices against Panerai. Assess this timepiece on its merits. And vote Luminor FTW. 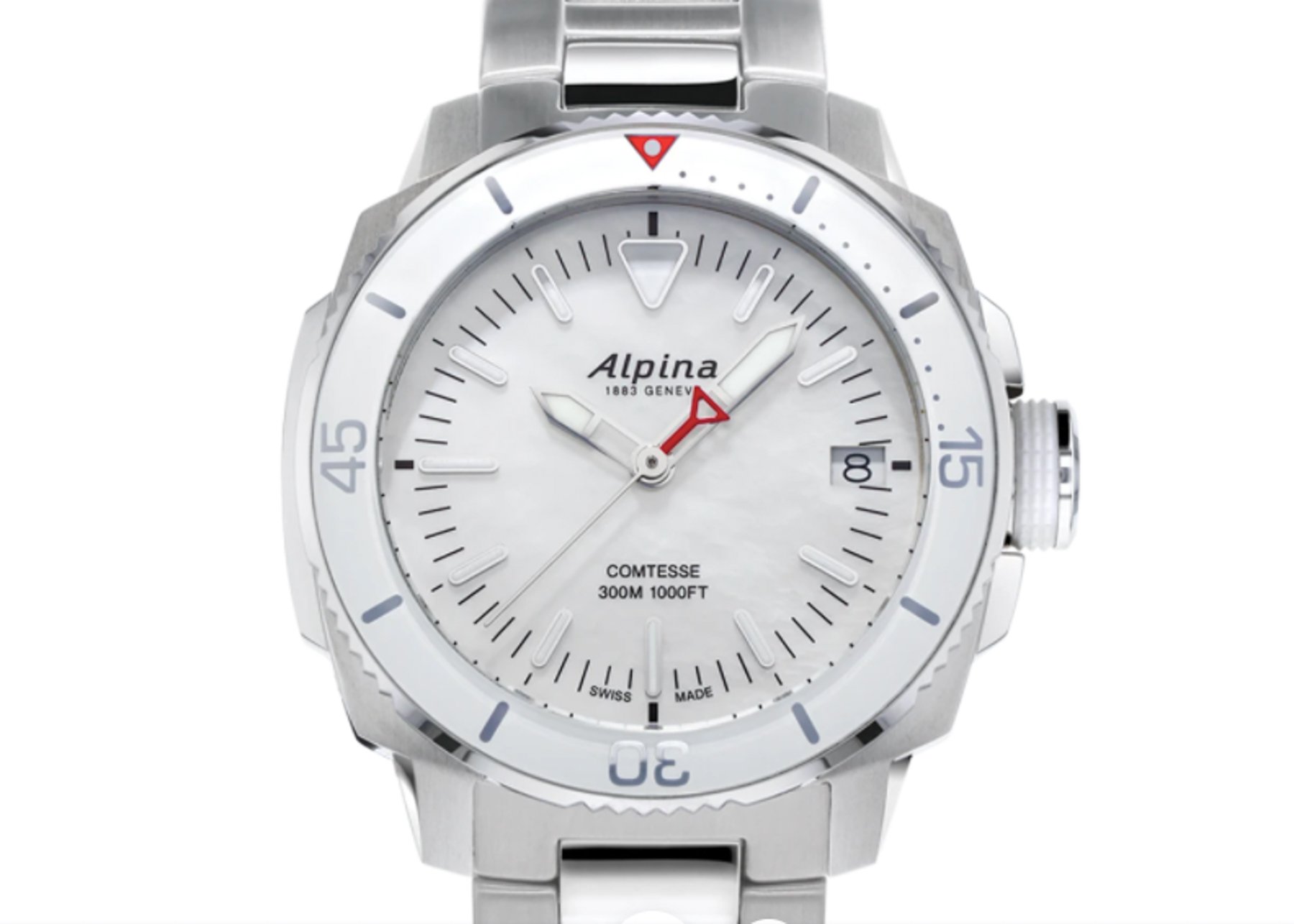 Use the extra 4K for an extra week of vacation… 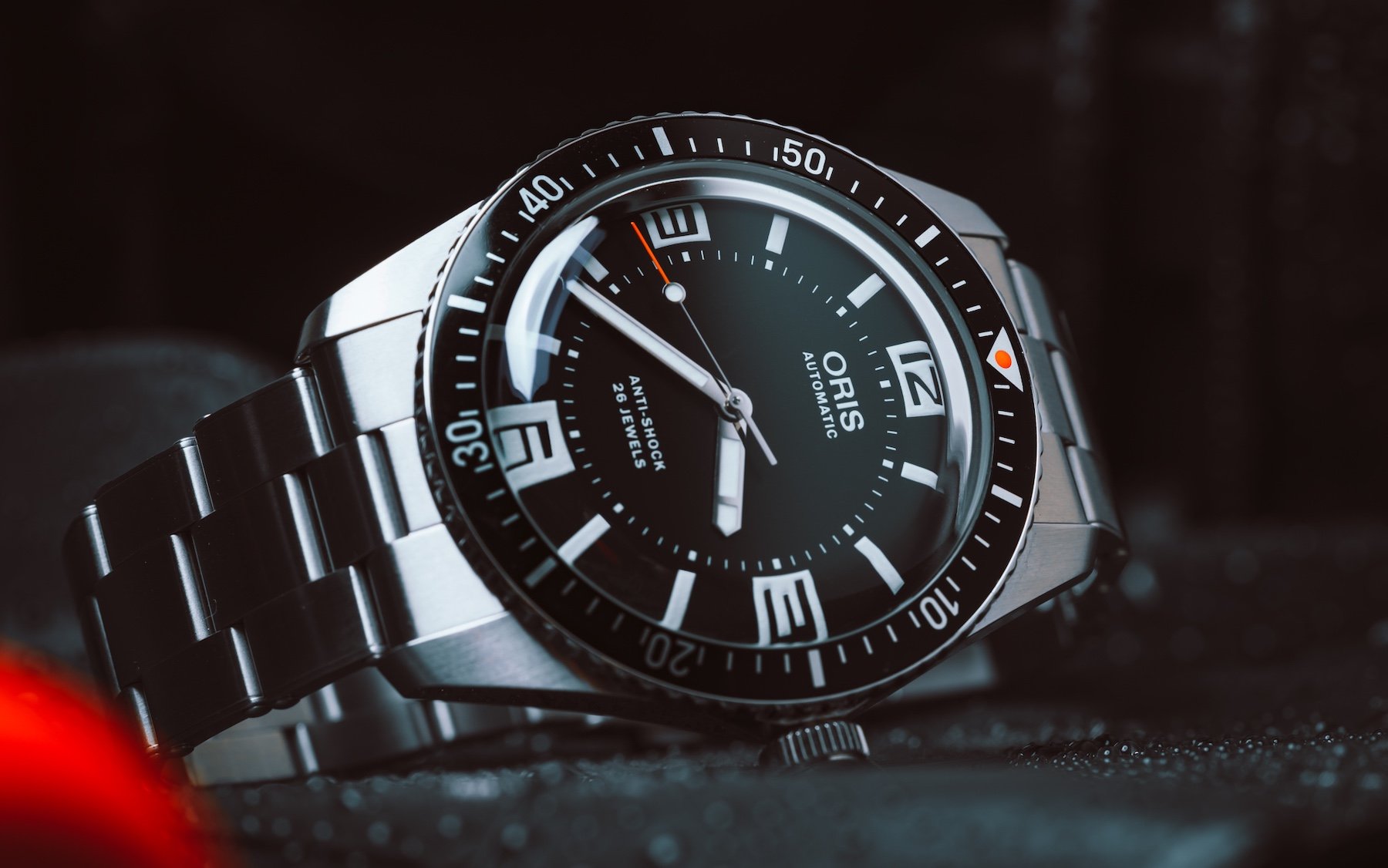 It isn’t Jim’s fault that I’m using an image of the Topper Limited Edition heritage 65 — you know I make my own rules… Hey, y’all get the drift, right?

In a similar vein, if I had my druthers (seems I had them removed along with my tonsils) my personal-personal choice would be (muffled drum roll…) the Oris Divers Sixty-Five Heritage, black dial, with the wicked cool negative, reverse-printed “old” lume ‘60s font with numerals at 3, 6, 9 and 12. God, I love this watch – 100m WR, gorgeous double-domed Safire glass, and a vibe that just doesn’t quit. And, oh, yeah, did I mention the supple, sexy black tropical rubber strap? It’s all I can do to keep myself from scrawling, “For a good time, slap a sleek Oris Divers Sixty-Five Heritage on yourself” on bathroom walls. But, I digress…. 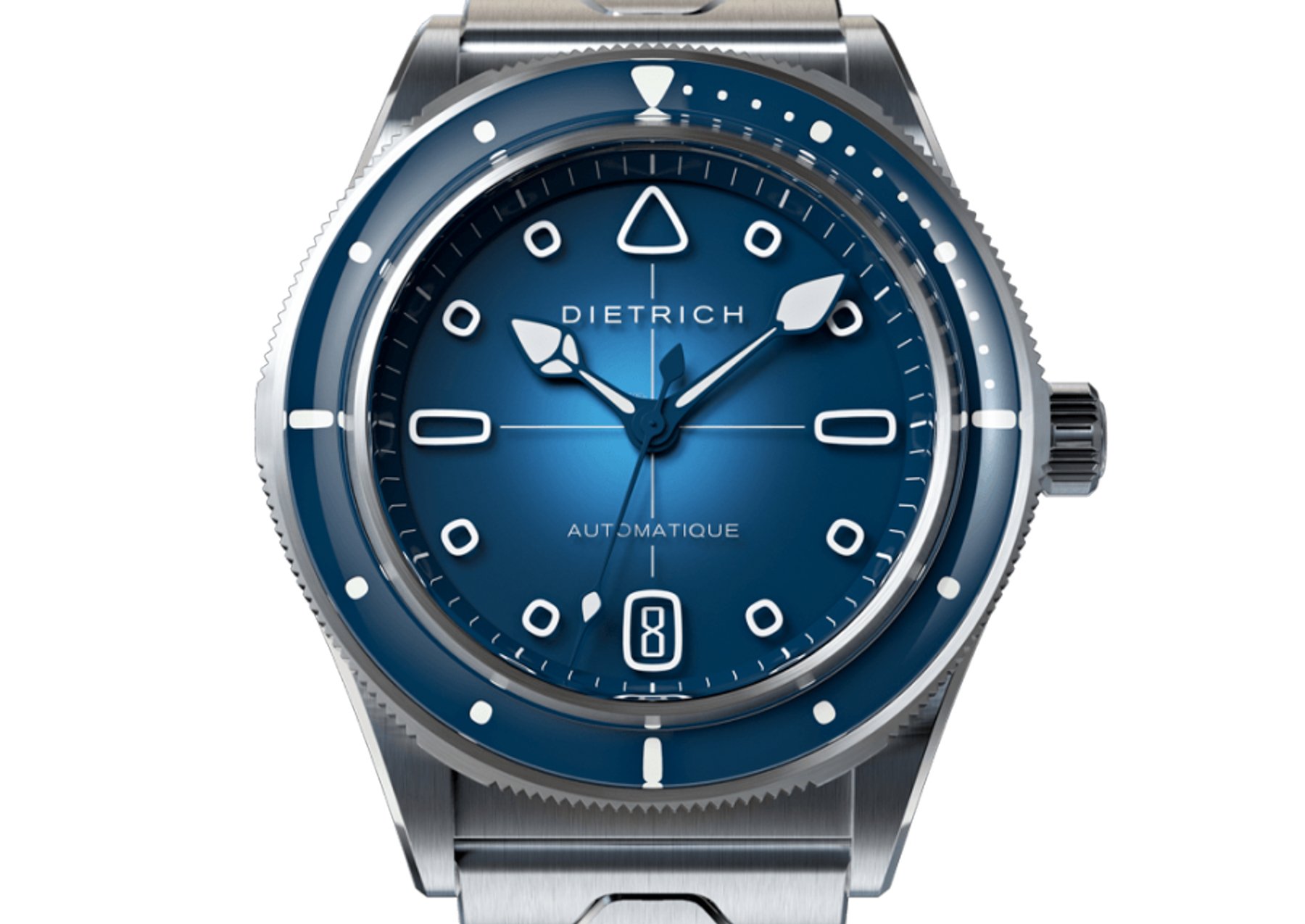 My top pick is the new Skin Diver Pacific Blue from Dietrich. 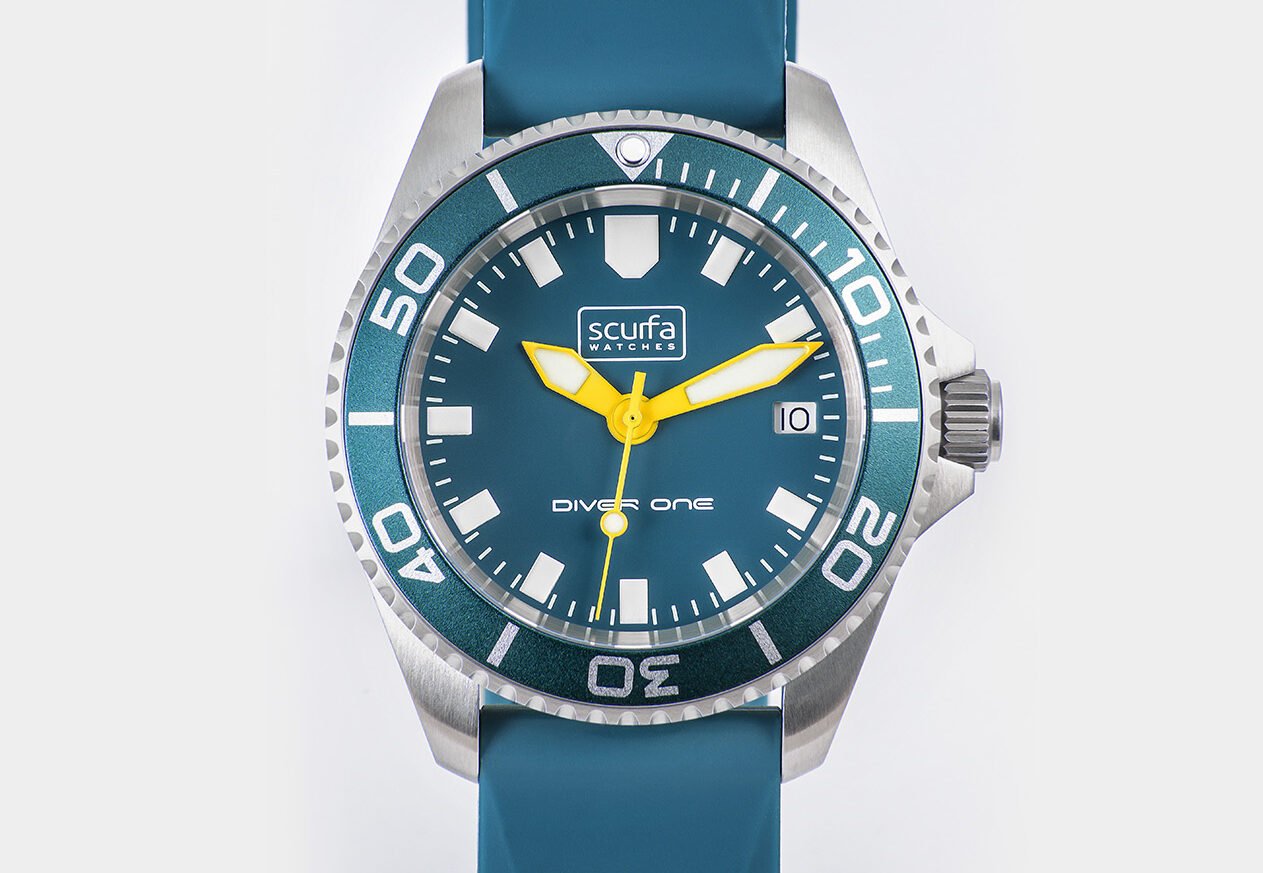 I like to think My summer watch would be something carefree. I want to put it on and not worry about its ability to withstand whatever abuse can be hurled at it. That’s why I personally choose a Scurfa Diver One in blue on bracelet (mainly because while the rubber strap is nice it, like all others, causes my wrists to swell). Whether I’m on my predawn six-mile hike or standing by the pool longing for the new pebble-tec to go in so we can swim again, showering the sweat off, or making my avocado crema it’s tried, true, and inexpensive enough that at least that part of my life is carefree. Now that’s a summer watch for me. 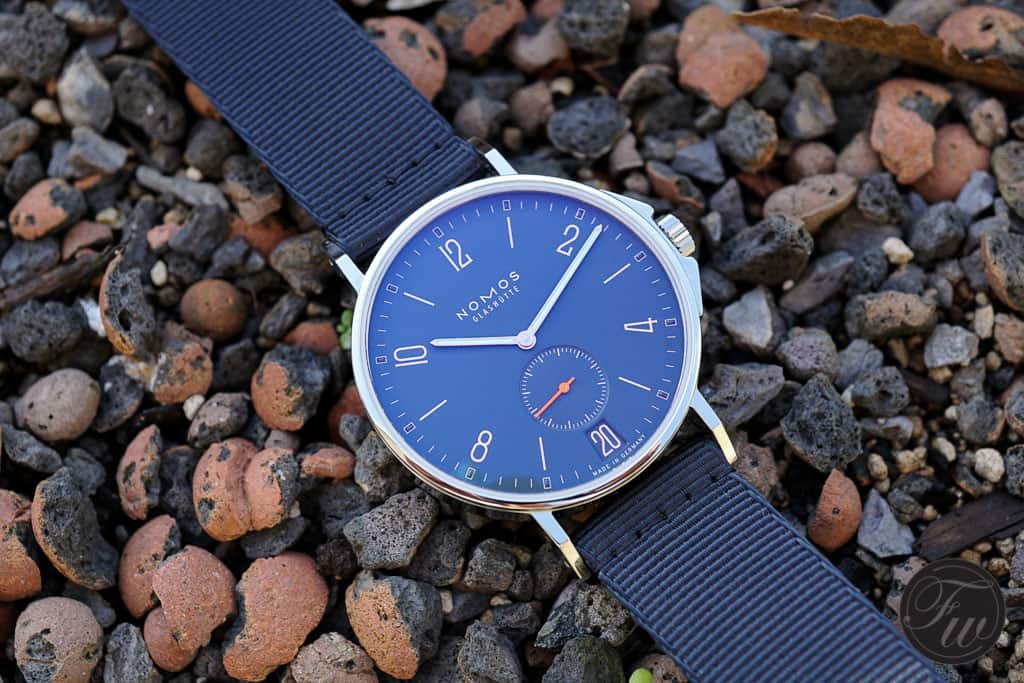 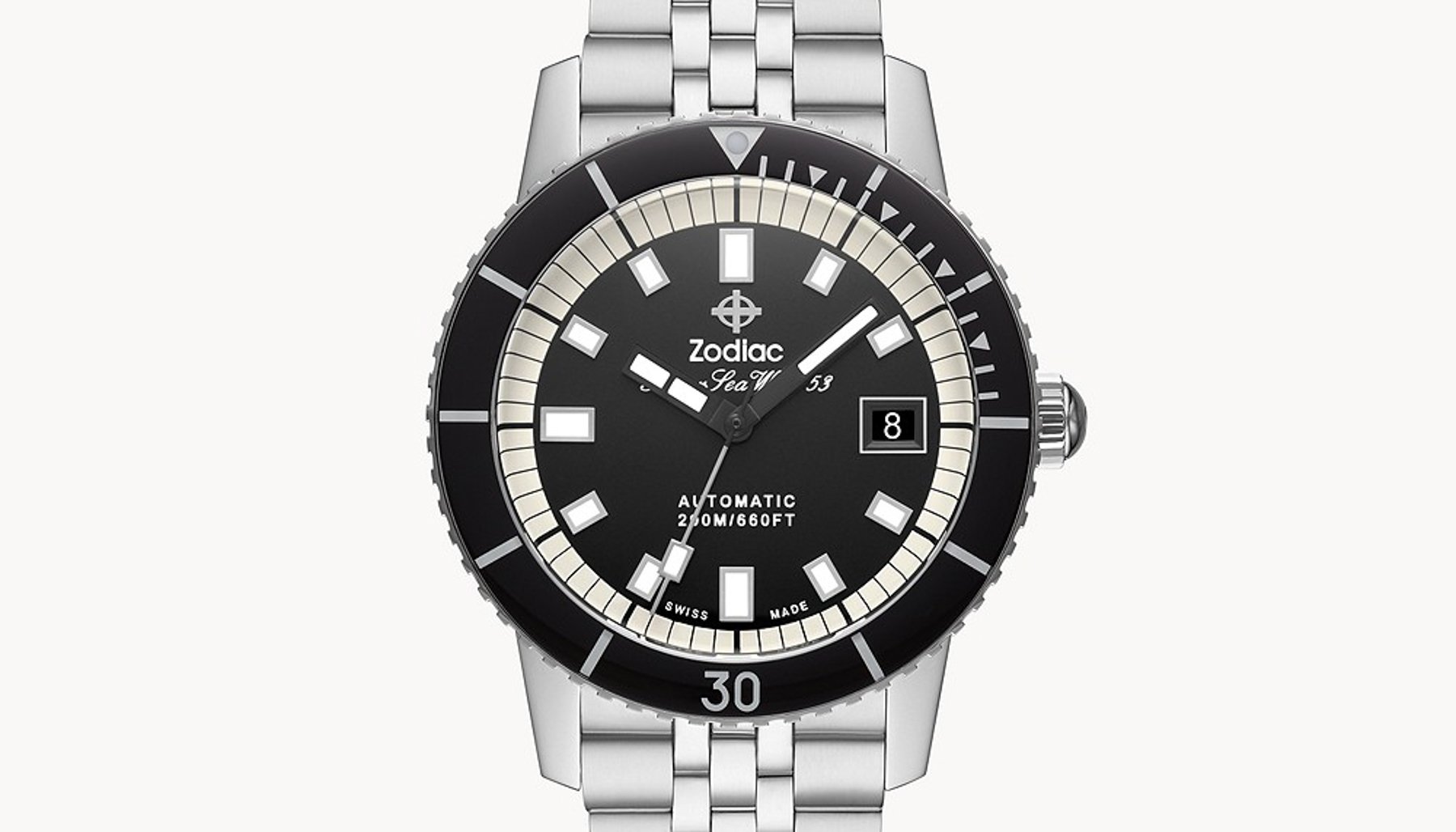 Because sometimes the name of the watch tells you all you need to know! 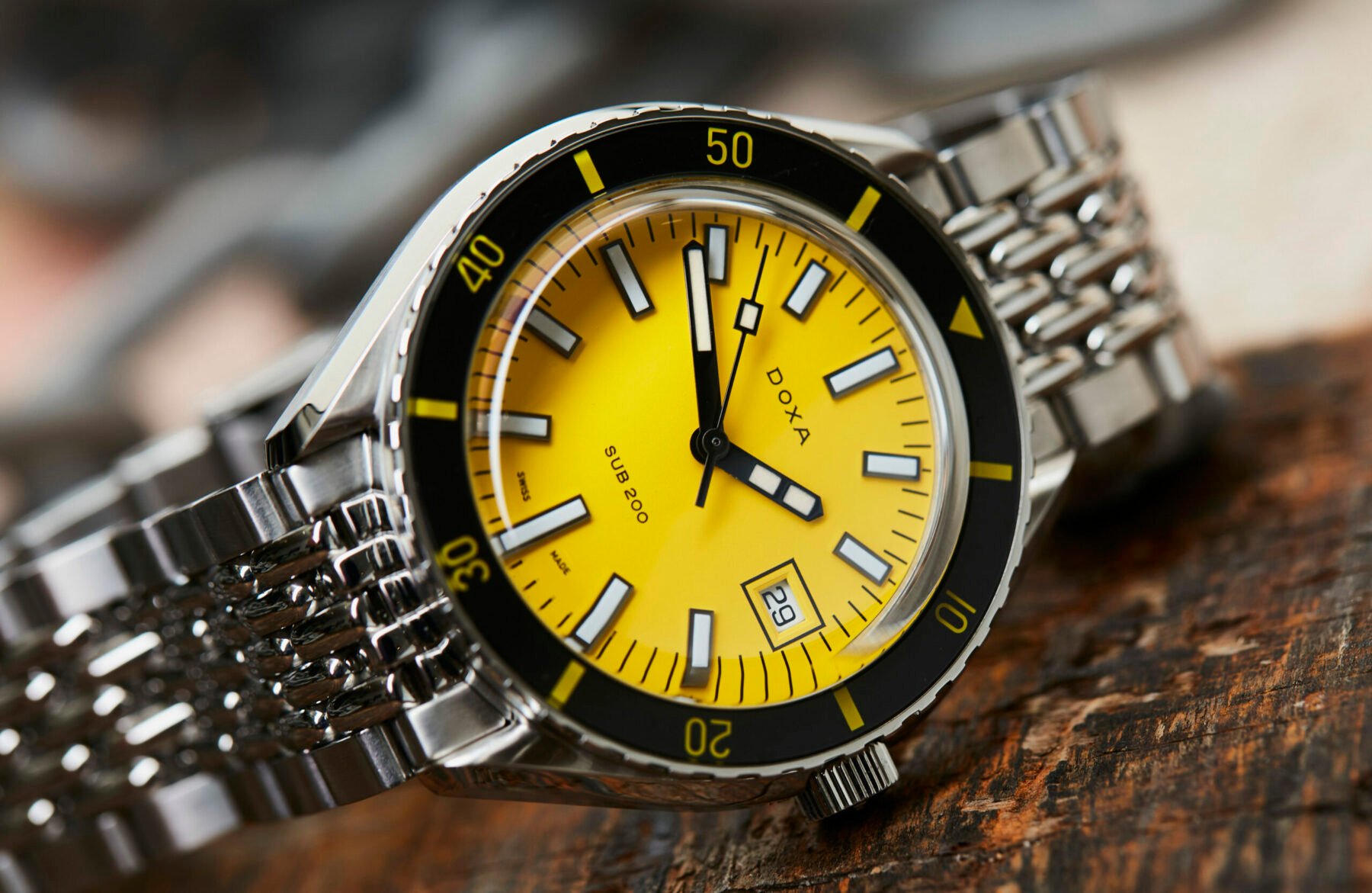 In case you are one of those people that can’t get enough sun, this Doxa will give you a glowing beam of light even if the weather takes a turn for the worst. 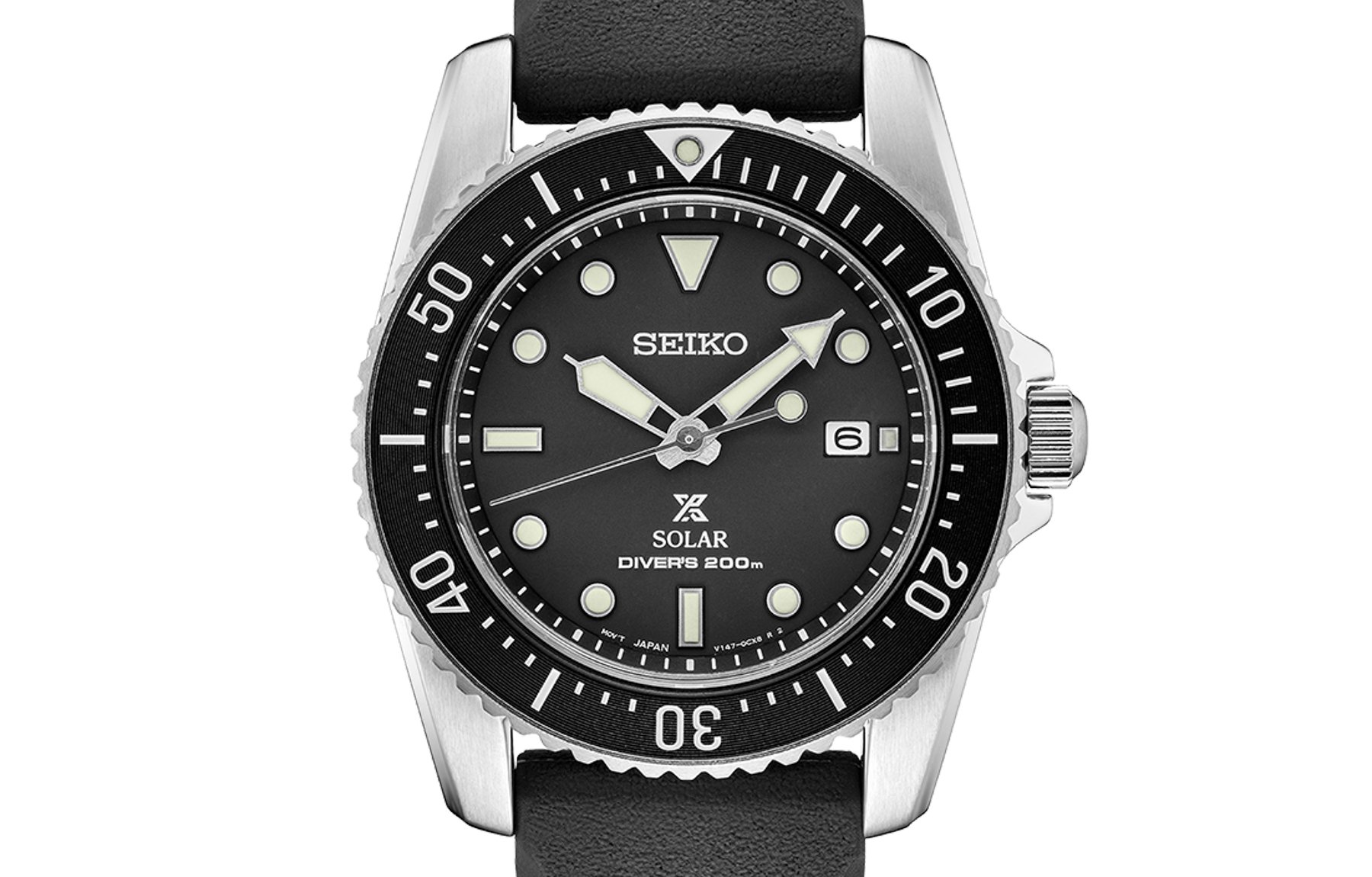 Another solar pick! These reliable Seiko solar divers are a real no-brainer for a stress-free summer. 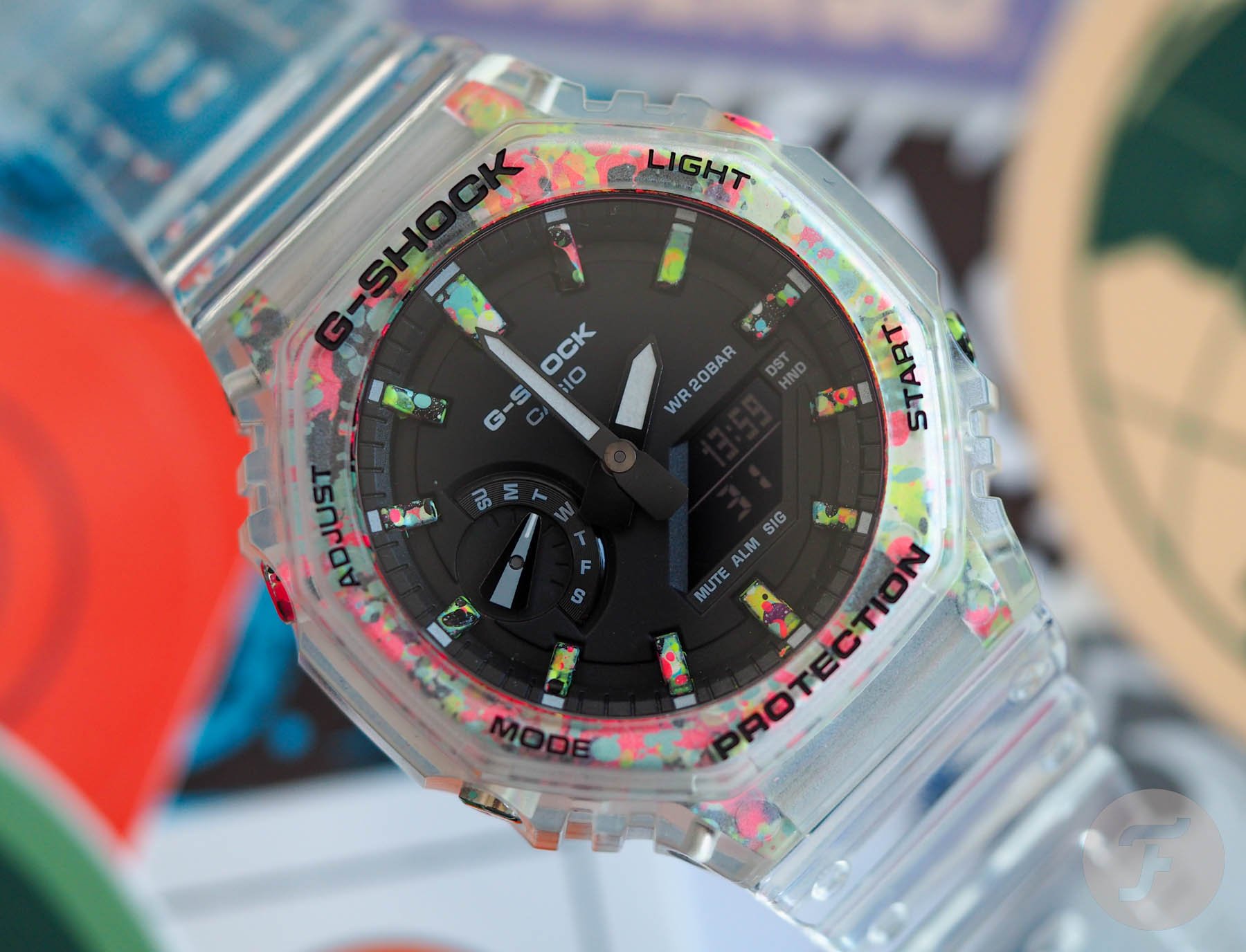 I used my sexy @LPEDTS limited for the image, but the regular skeleton is a very versatile summer selection…

I have many “summer” watches but the one summer watch I wear the most and never worry about scratches, dents, getting waterlogged, or even lost is my G-Shock GA-2100SKE, transparent.