Imagine you had this watch in your cellar for 15 years and you had no clue. Simply because the day you bought the flat, you moved all the old stuff belonging to the previous owner there and you haven’t found the time to go through it. That was until last month and the day you discovered this stunning Heuer ref. 349 in an old box…

A true story. Katarina, a young archeologist from Nitra in Slovak republic contacted my watchmaker, asking if he would be able to identify the watch she found in a cellar and bring it back to life. When I saw this Heuer with heavily cracked and yellowing plexiglass a few weeks ago, I was sure there would be an untouched dial hiding beneath it. Last weekend, my watchmaker called me again. The Heuer ref. 349 was fully serviced and ready for shooting for today’s #TBT. 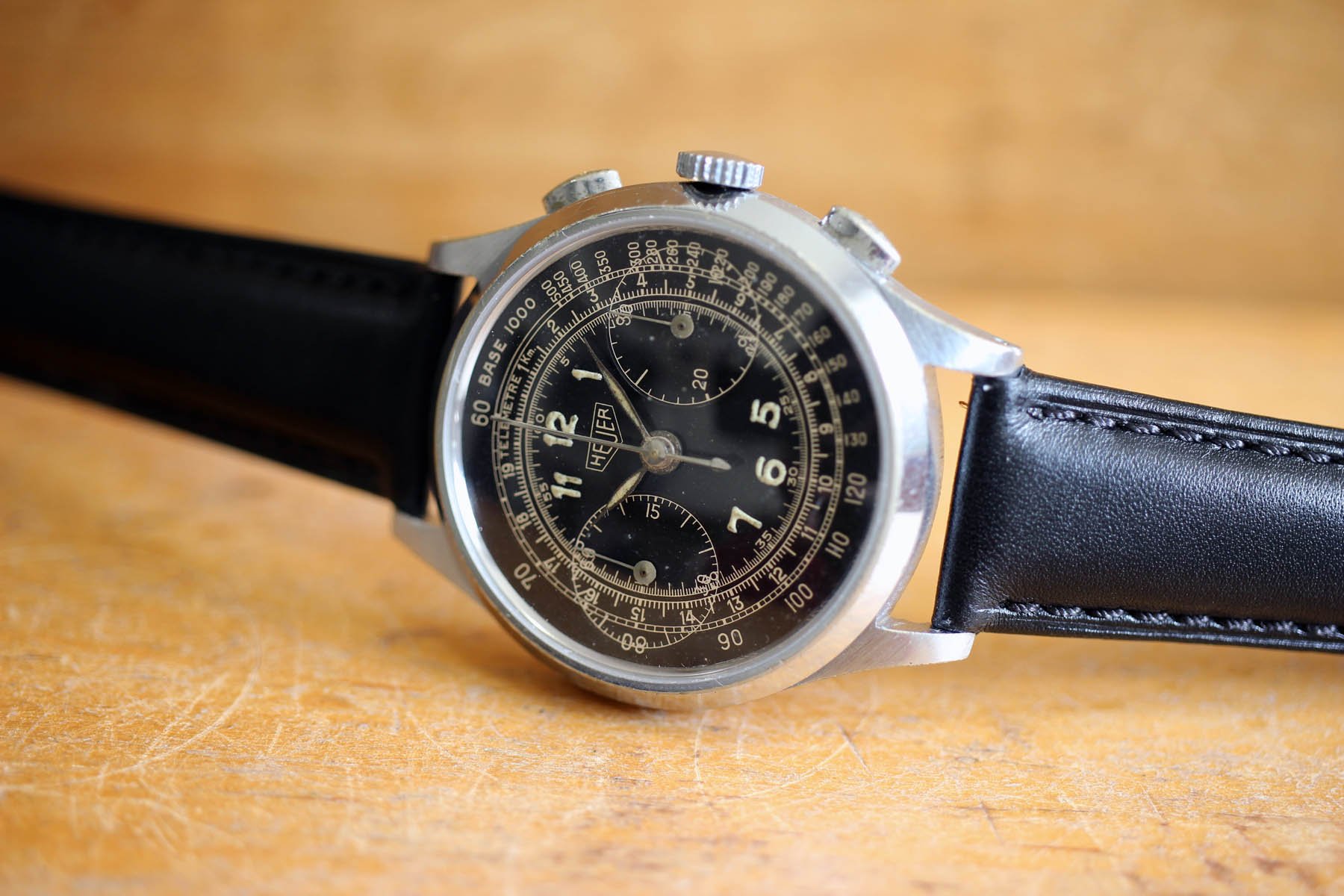 A Heuer you won’t find every year

Or to be precise, a Heuer you maybe won’t find in a lifetime. First of all, most of the chromium-plated and nickel cased watches have suffered an unfortunate fate. To find a chromium-plated chronograph from the 1940s in a condition that you have to check it twice to be sure about the plating, that’s pretty interesting. Make it a black-dialed Heuer with a telemeter and tachymeter scale, and you have good reason to get excited. Throw in a 36mm diameter case, so-called “big-eyes“ sub-registers and you have an excuse to paint the town red… 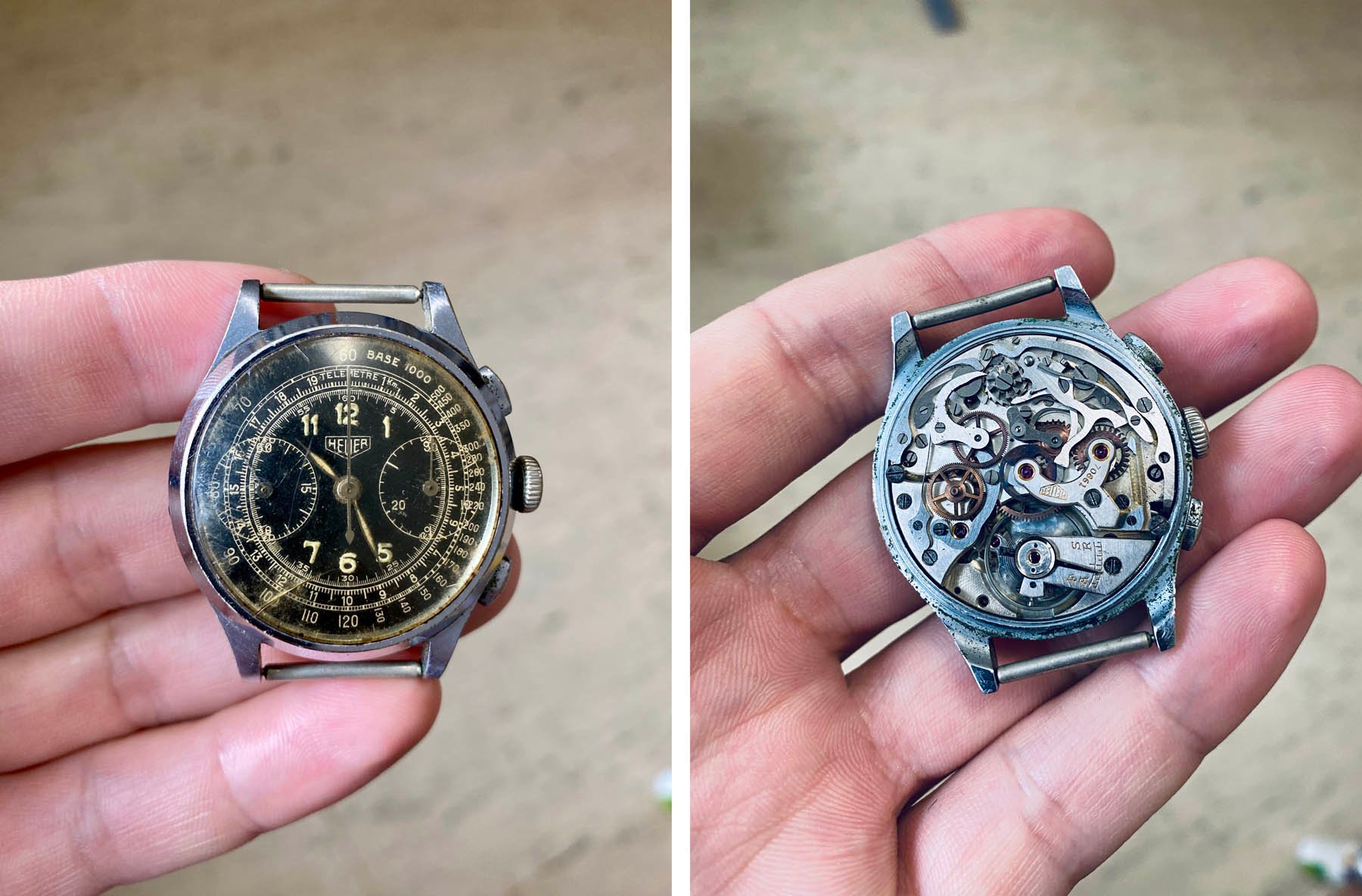 The original owner was called Rudolf Malina and he was born in the 1920s. He graduated as an engineer and became a land surveyor. He later worked as a lead engineer at Geodesy Authority in Nitra, the city he died in. His wife was a Latin professor that studied in Budapest, Hungary, and came from a wealthy family. As such, it was probably her that gave him the Heuer watch. They had no kids and after the death of his wife all the relatives turned their backs on him. Katarina’s mum knew Rudolf from the office and decided to look after him in his last years. When Rudolf died in 2005, all his stuff ended up in boxes in the cellar.

The lady that found the watch is an archeologist with no passion for watches. But she is passionate about everything historical and, as she says, “It’s my professional deformation.“ As she plans to move out to Austria soon, she finally decided to sort out stuff in the cellar after many years. “I don’t know anything about watches, but I liked this Heuer from the first moment I saw it. And it looks like it found me. As it reminds me of Rudolf, I decided to service it and keep it,“ explains Katarina. 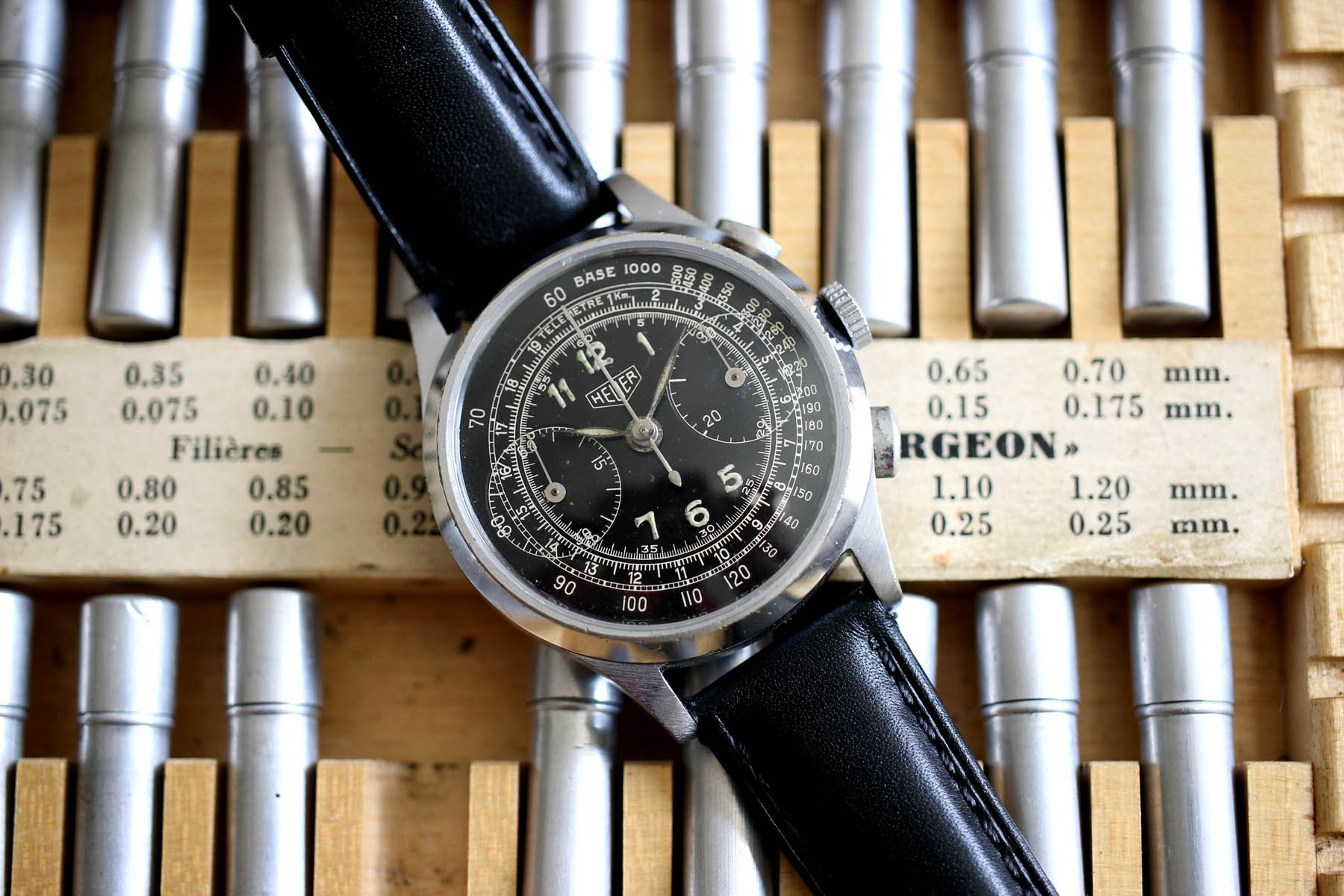 Not many of them to see

To find another piece is not easy at all/ And I’m talking about finding a piece to use as reference material. It would be far harder still to find one in this condition for sale. You can find an almost identical piece listed at OnTheDash.com, which is the great information source on Heuer watches. According to the site this particular chromium-plated ref. 349 was introduced in 1942 and was first listed in the 1943 catalog. Based on the slightly updated Tachymeter scale and logo I assume that Katarina’s piece might be a slightly later version of the same reference.

If you compare the reference from OnTheDash.com to today’s hero, you can see what normal wear can do to the chromium-plated watch. With the bare metal visible on every single edge, the watch lost all the original curves. Katarina’s Heuer looks almost like a steel Heuer. The bare metal is visible only here and there on pushers and back, obviously. The brushed effect on the side of the case is practically untouched. Under the closer inspection, I was happy to find no deep scratches or scars. 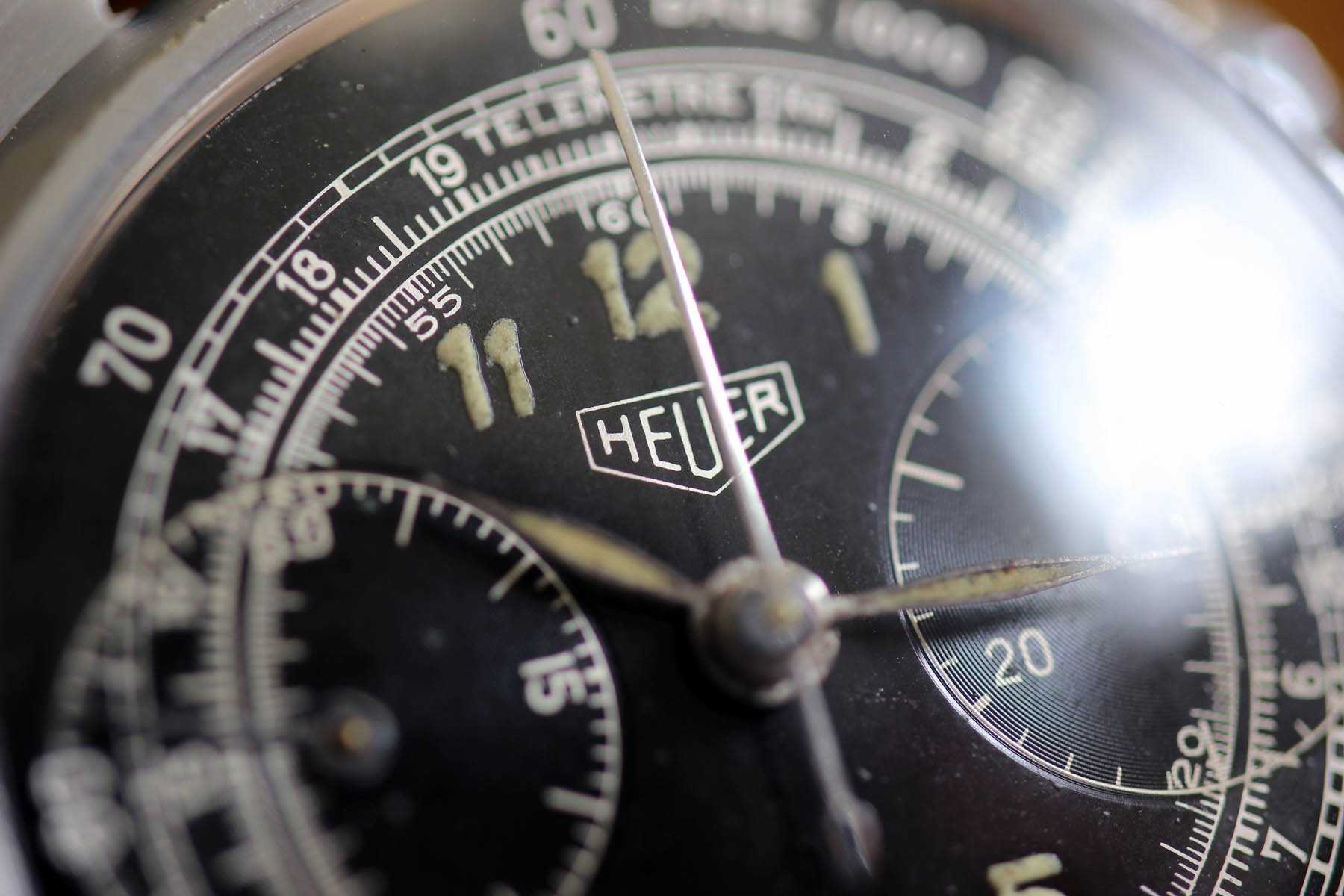 This Heuer was fortunate enough to avoid the hands of reckless watchmakers that don’t bother much to open the case with whatever they find nearby. A heavily scratched plexiglass suggests that this Heuer is no virgin, but the original owner was smart enough to put it aside at the last minute. If he wore it a bit longer with that big crack on the Plexi or had stored it unwisely, the dial wouldn’t be so glorious today.

There is something about this watch and it rightly occupies the place on many collectors‘ wishlists. The diameter is just about perfect. The “big-eyes” sub-dials make it almost contemporary. Once on the wrist, I felt like this is The Design of all the chronographs coming decades later, all they want is just to be like this one. Slightly mystique and elegant all-black fit contribute highly to the charm. 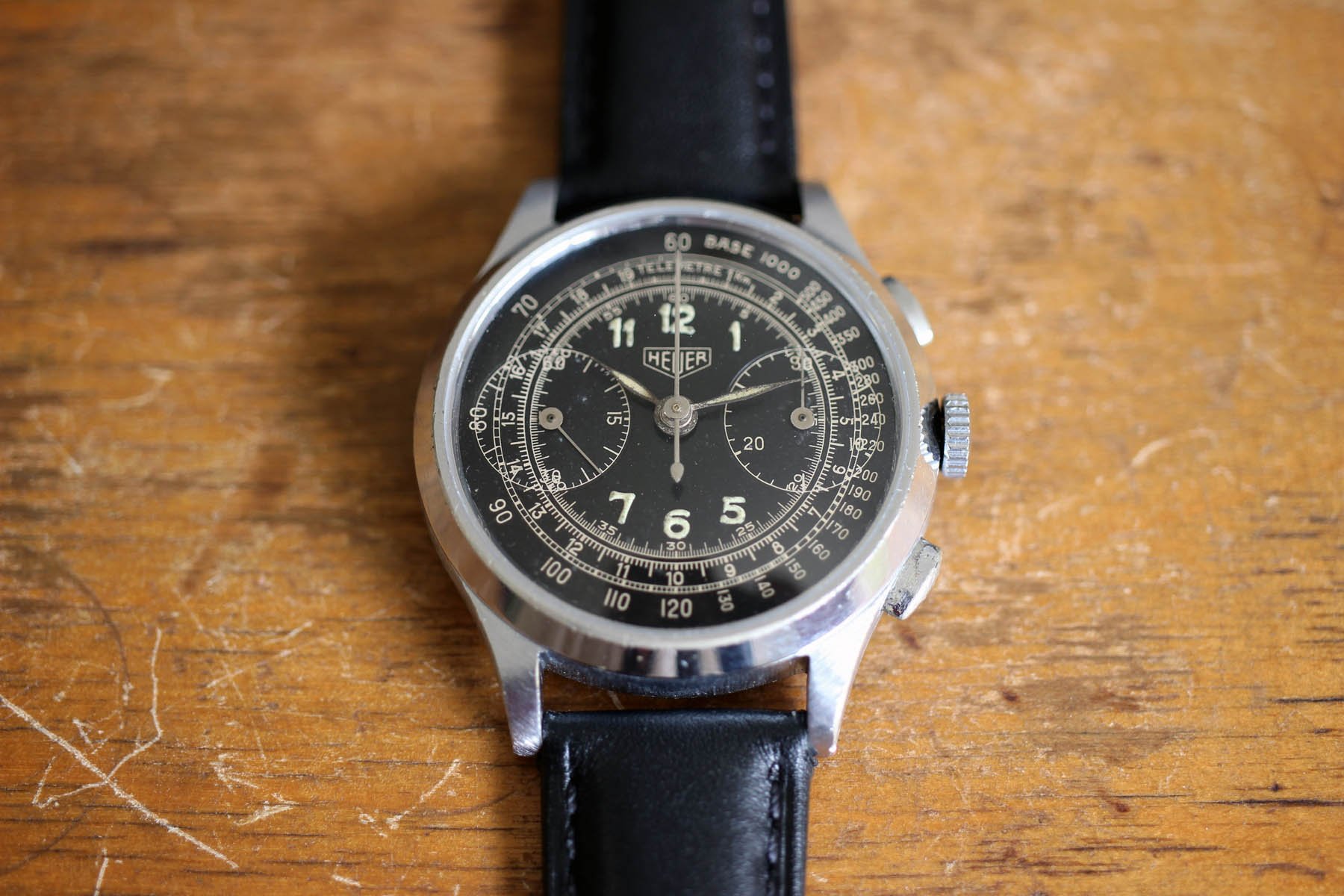 Plexi does the magic

I was turning the watch up and down like there was something about it I couldn’ see. Then I realized it. My watchmaker had to pull out his pre-historic pantograph and craft a new Plexi that looks almost as good as the original one. Some other domed replacement would look dull. To see such a Plexi today is rather seldom and reminds me, to remind you, that if you source a vintage watch and try to put it back to the original shape, how important the correct Plexi profile is. It’s the gateway to the visual experience. Whatever beautiful dial is there, the wrong Plexi ruins half of the experience.

I sent pictures of this watch to Jeff Stein, one of the most renowned Heuer collectors worldwide. “There is more interest in these circa 1940 chronographs lately, the Valjoux 22 and the Landeron 13. They are great looking watches and have been under the radar. We are learning to identify them and understand which models are correct. Recently there is more confidence among the buyers. So enthusiasm and prices have increased.“ It’s quite complicated to precisely date this piece, as there is nothing solid for this period. After a discussion with few collectors, we agreed that Katarina found an early 1940s Heuer that might be priced somewhere around the $2,000–$3,000 range.

My first thought was what cellars do I have access to. I am happy to share another great find story to prove that there still are a lot of forgotten watches out there. This amazingly preserved Heuer ref. 349 ended up in the right hands.  True to her profession as an archeologist, Katarina requested that the original components that needed replacing during the service were returned to her. I am sure that this restored Heuer beauty will bring great memories about the original owner anytime Katarina looks at her wrist.

Hot Topics
Introducing: The Omega Speedmaster Super Racing With Spirate System
159 comments
Design Vs. Specs — Which Is More Important To You When Buying A Watch?
86 comments
The Time To Buy Is Now: How The Current Economic Climate Influences Watch Buying And How You Should React
51 comments
Introducing: The New Cartier Tank Française
49 comments
A Regret-Free Guide To Buying Your First Luxury Watch — Part Three: Higher-End Options From Omega, Rolex, Grand Seiko, And More
48 comments
Popular
The Ultimate Sports Rolex – The Explorer II Reference 1655
Robert-Jan Broer
17
An Overview Of All Omega Speedmaster Apollo XI Models
Robert-Jan Broer
17
Grand Seiko SBGA211 ‘Snowflake’ And Why I Didn’t Buy It
Robert-Jan Broer
23