A watch you haven't seen before
Tomas Rosputinsky
comments 6
Share

Shall I repeat myself, or will you read that again? If I were a gypsy king, the Turtle Astronaut would be my second choice after whatever gold watch. This watch is so awkwardly different that, in a way, it’s actually cute. If I didn’t see the watch and had just read the above description, I would think it was an April Fools’ “frankenwatch” to entertain readers. Well, it’s not. I am serious. And the Turtle Astronaut is a seriously great watch at that. 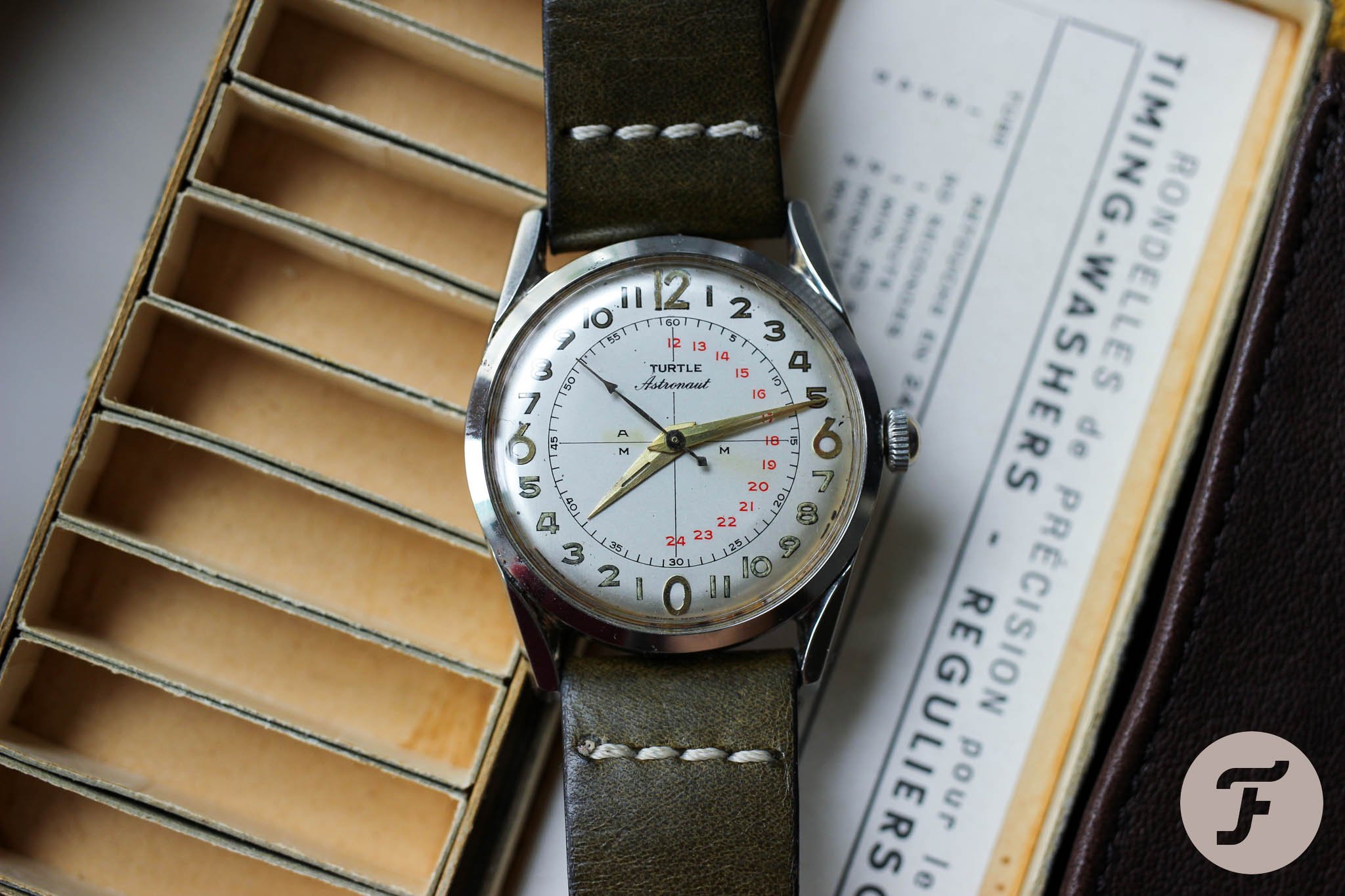 An auction house from which I’d bought a watch before put yet another watch auction catalog online. They all do this constantly so collectors can’t take a month off… Anyway, I noticed a decent Mimo Direct-Time and I was about to get it, but I didn’t, as it ended way higher than I expected. What I didn’t notice was that the rest of the auction spanned a few days. If it wasn’t for Jeff Stein, who brought the Turtle Astronaut to my attention, it would already be sitting in someone’s else collection.

Everything about this watch is eye-popping, and we can start with the name. “Turtle” and “astronaut” are two random words that you would hardly ever put together in the same context. Well, someone decided to print them on the dial. Who actually did that? Well, it seems that Turtle is a brand name registered to Zell Brothers, Inc. Europeans who love skiing in Zell am See may see something Austrian in the name, but it was actually a jeweler in Portland, Oregon, USA. If you fancy some fun facts, some of the watches that Zell Brothers had specifically contracted for them were assembled by Rolex. 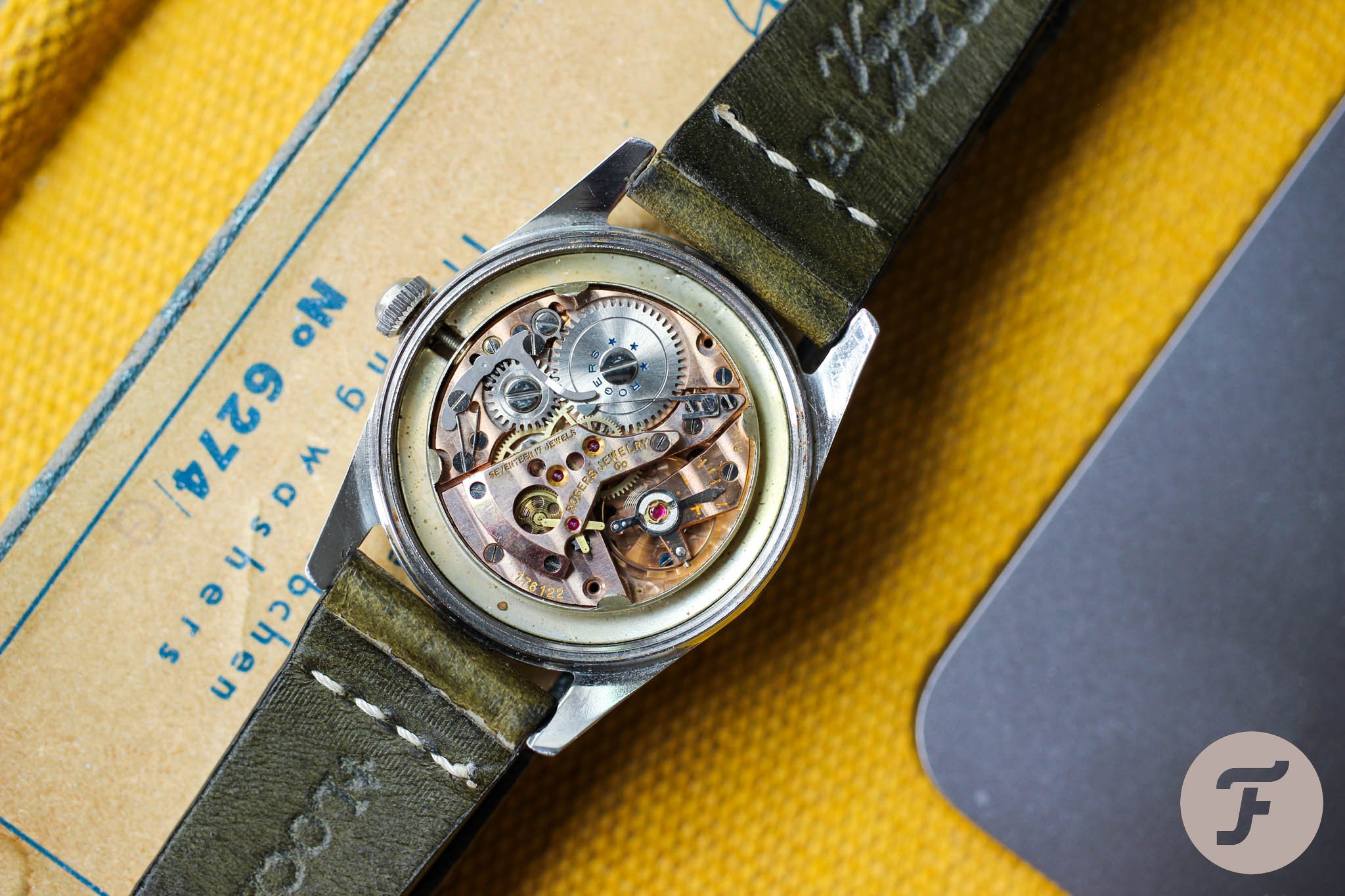 With that knowledge, it’s even more surprising to look under the case back at the beautiful Chézard deadbeat movement. What we find there is a blue-filled “Rogers” engraving on the ratchet wheel and “Rogers Jewelry Co” signature on the deadbeat superstructure. This suggests who the real sponsor is here. In 1937, Harry Marks (a young jewelry salesman) and his partner Dr. Robert Moon (a practicing optometrist), founded Rogers Jewelry Company in Modesto, California. To my surprise, the company is still active and now has stores located in nine cities in California. I tried to contact them about my find, but it seems that the topic doesn’t excite them much… 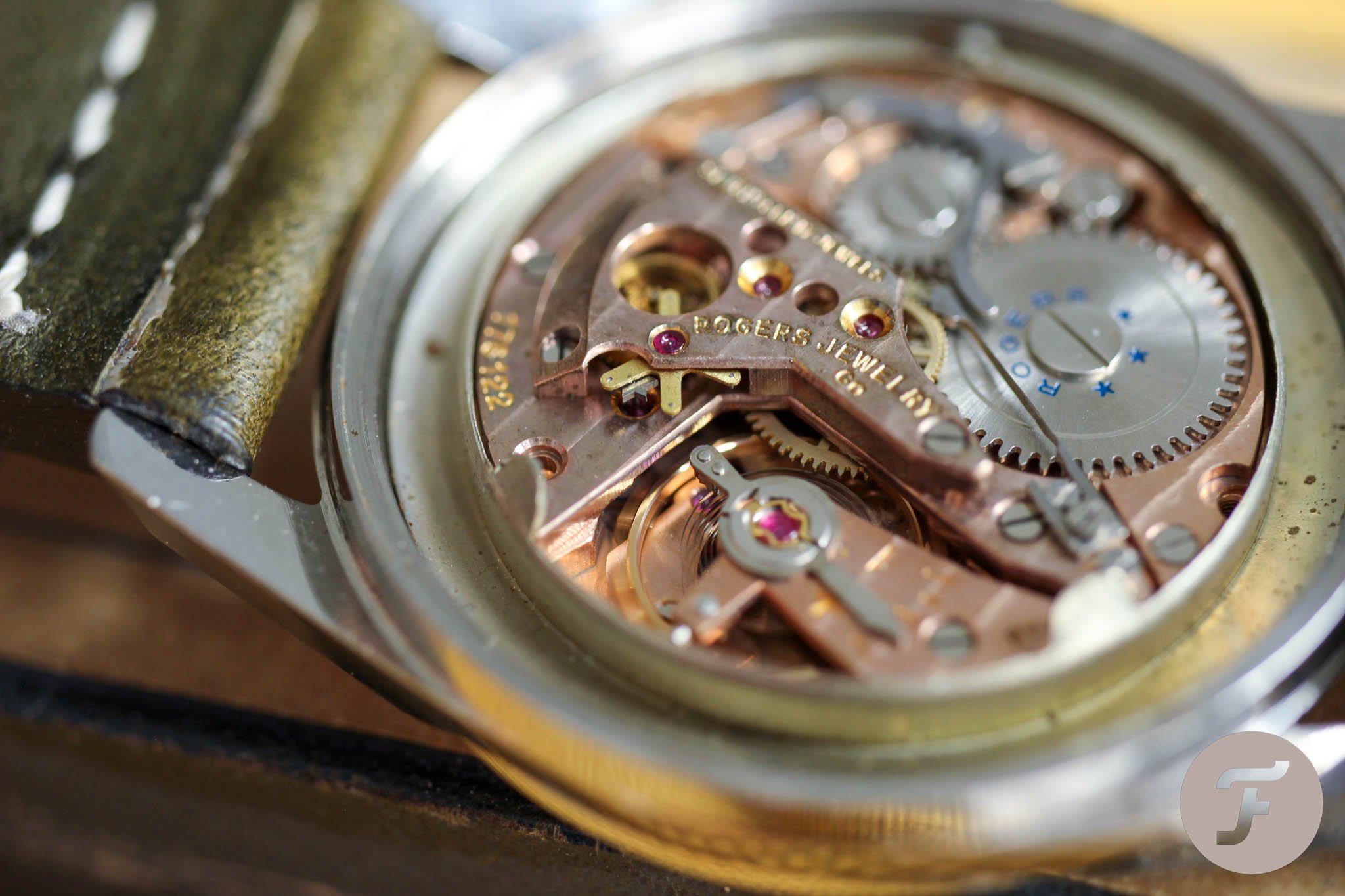 And there is so much to wonder about

It’s a 24-hour watch with deadbeat (or jumping) seconds. I don’t know of any other watch that combines these two complications. I explained a deadbeat or “quartz-seconds” movement on #TBT a few years ago with the Chézard 7402 in the Tourist Radio-Top. It’s an interesting exercise to compare both movements. Caliber 7402 is simpler and pretty flat. The magic happens between the two equally sized gears hugging the pawl with a pinion in between them, all of which is clearly visible. 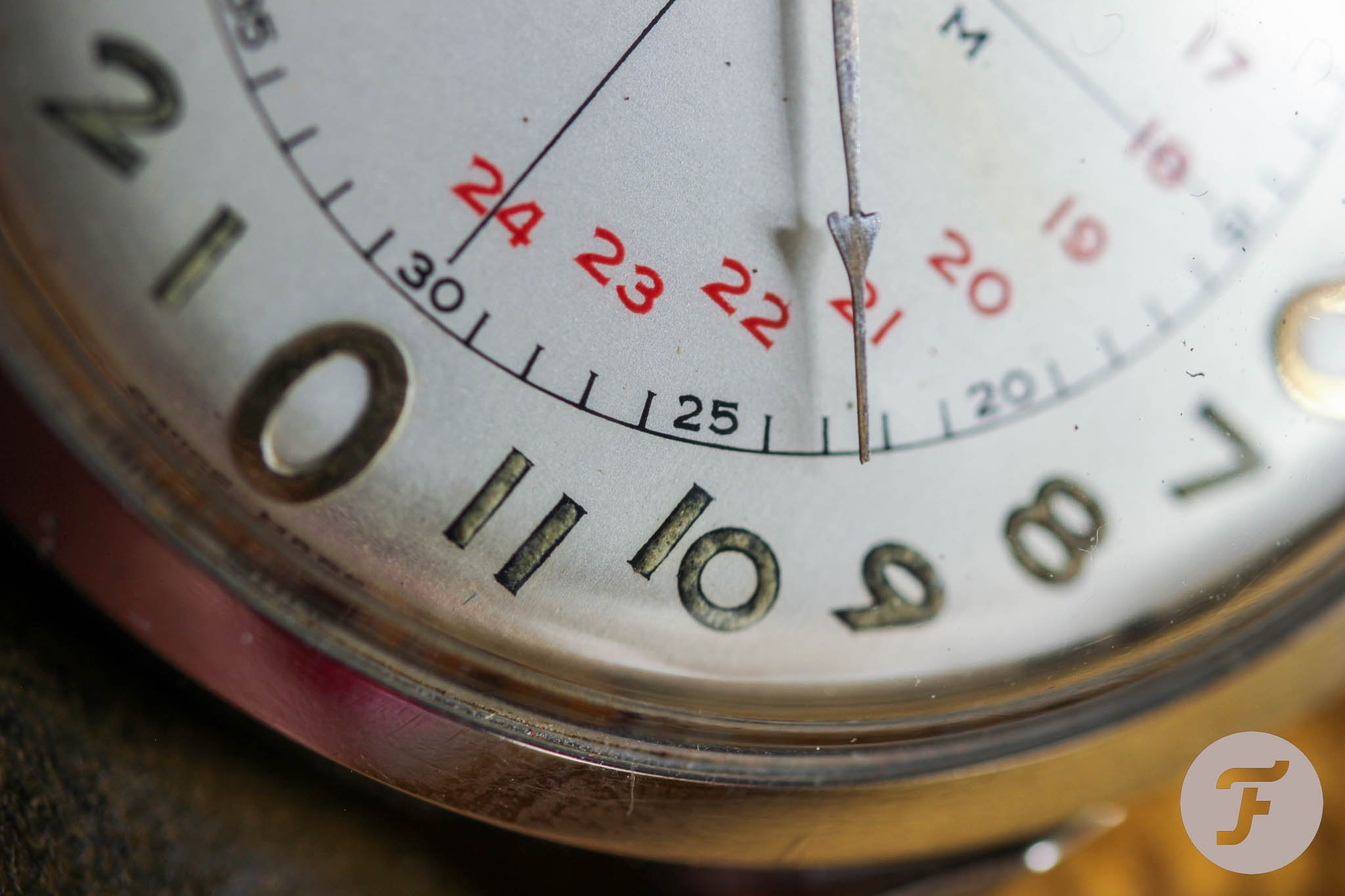 Although both deadbeat movements were produced by Chézard, the 116 caliber from the Turtle Astronaut has a different construction. The side view is unusually attractive, as it reveals the more complex “sandwich” structure of the movement with a deadbeat module on it. The deadbeat components are integrated and protected under a thick plate that has a few holes that allow you to see the parts inside.

To avoid confusion, you might bump also into Chézard 115 caliber. And while they’re almost identical, the Chézard 116 just implements additional features that add to the outside-the-box personality of the Turtle Astronaut. When you take a full-frontal look at the watch, you see a tiny space between the case and the hat-shaped crown. That miniature gap is not an imperfection, but rather, a feature. If you press the crown against the case, you can hack the seconds. That would’ve been quite useful if the wearer wanted to set the watch in sync with a radio signal. 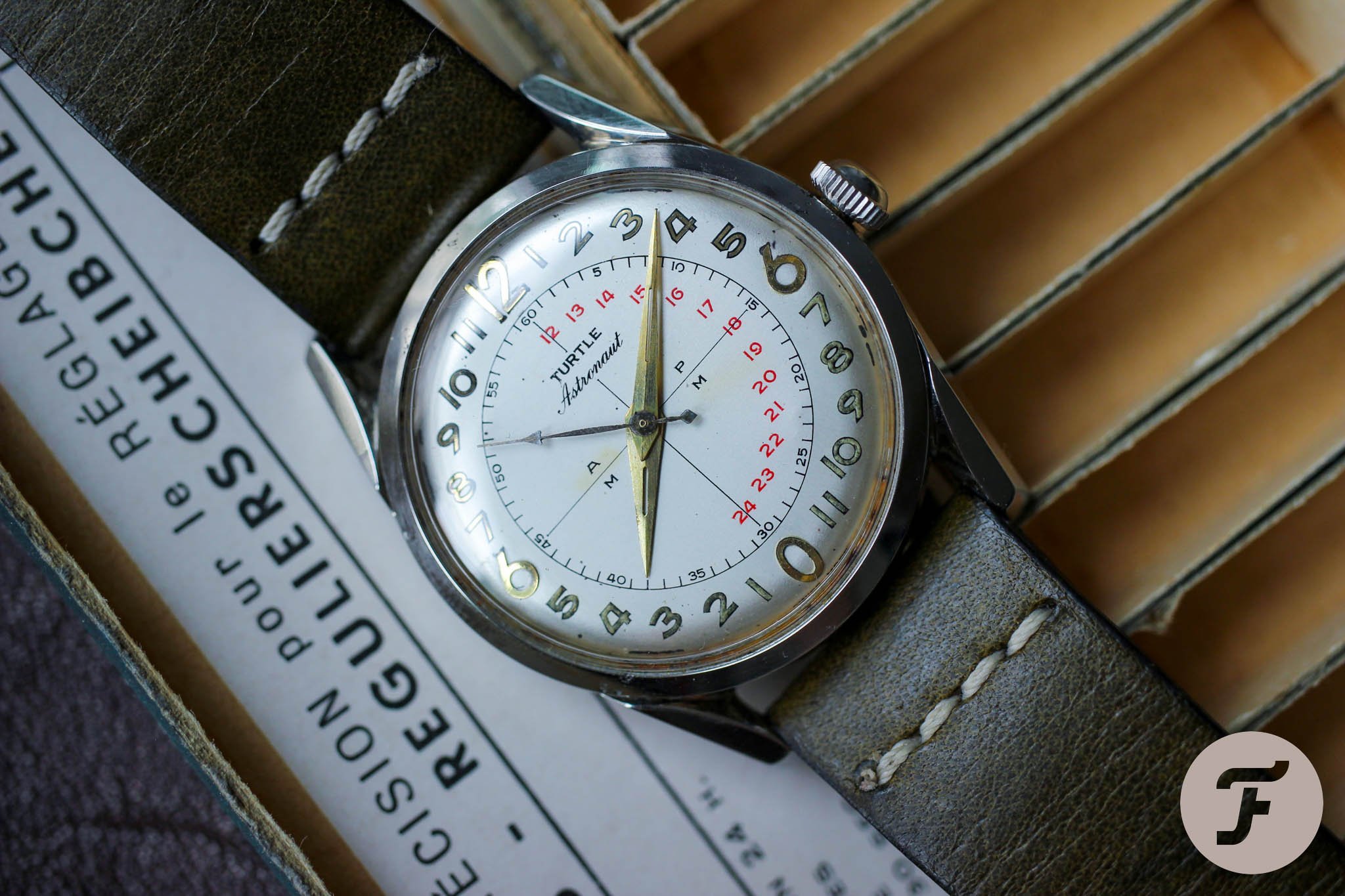 There is an additional tiny spring that’s visible through the hole in the movement’s top plate. Its end isn’t fixed, and thus, it allows the user to hold the crown pressed for however long and the watch never stops beating. Obviously, there is a bit of friction when the tail of the spring glides over the edge. It slows the balance a bit, but after the crown is released, the watch goes back to running normally.

The show goes on

The 24-hour deadbeat-seconds movement isn’t the end of it. Just look at the dial. The simple minute track is pushed deeper toward the center and leaves the set of 24 numerals interestingly hanging in the air. Now comes another oddity. The numerals for 12, 6, 0, and 6 (again) are actually applied and are slightly bigger than the rest. Only after a closer look, though, you can notice my favorite design detail on the dial. While the daytime hours from 6:00 AM to 6:00 PM are simply printed on the dial, the nighttime hour numerals have lume applied to them. That’s just amusing. 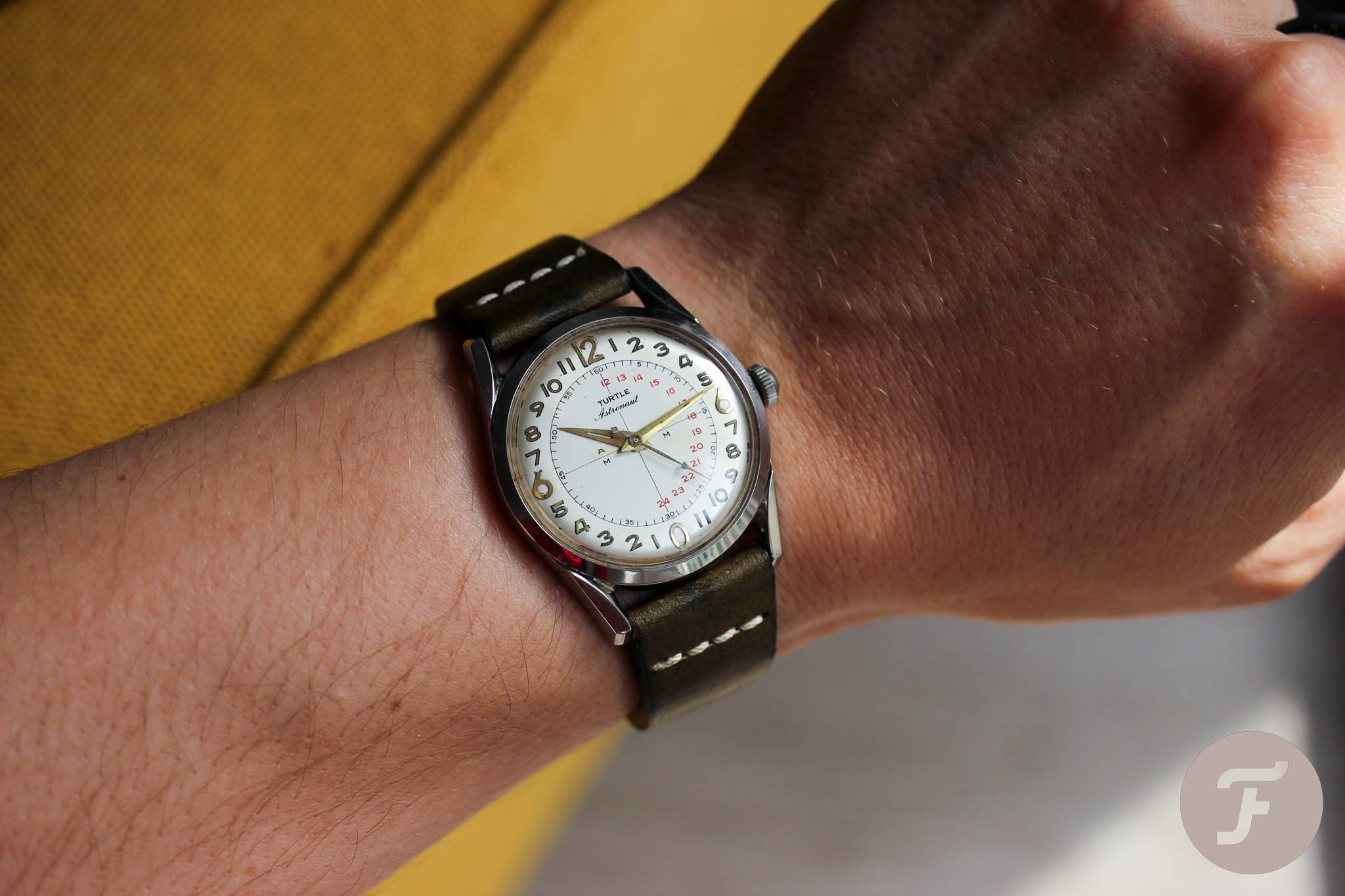 The Turtle Astronaut also creatively addresses the dilemma of AM/PM versus 1-24h markings. The main outer hour display matches its US origin and suggests the core market that this watch was made for. It’s strengthened by the sector dial structure with small but perfectly visible AM and PM signatures. An additional small half-track with 12 to 24 numerals printed in striking red is the real cherry on the cake. For we Europeans who mostly operate on “military” 24-hour time, it’s not only eye-pleasing but also quite practical. I’ve claimed that the Breitling Cosmonaute has an easy-to-read dial, but reading the time on the Turtle Astronaut is pure joy. 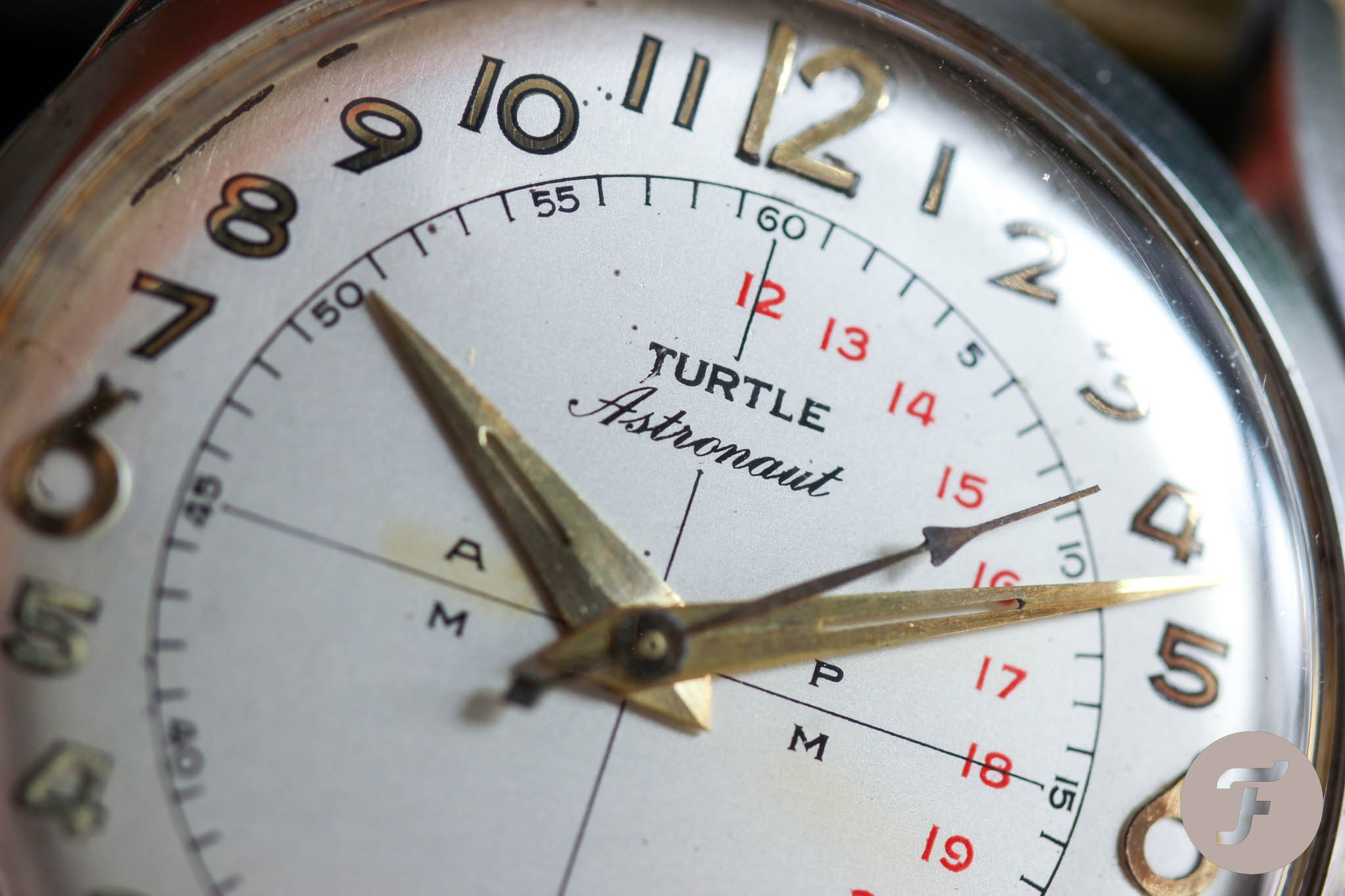