Dear fans of #TBT, I’m afraid this week’s issue will be a bit different. As Mike is on his much-deserved holiday – from the series – I was asked to do the next article. It will lack the cool, suave Florida talk, the praising of 60’s watchmaking which we all love to read about and even the endless lines discussing the smallest details on a piece…pun intended, Mike 🙂 This week, though, we feature a superstar from a bygone era: a time when design was mostly to serve function, not aesthetics. The company is none other than Angelus (the original one, not this) and the watch is their legendary chronograph, the Angelus caliber 215.
I can’t recall the first time that I saw this watch. I remember, though, that I liked the fact that it had the same design as certain Omegas, among many other brands of course, from the same era. I loved the dial; it was so simple yet complete with the little trapezoidal Angelus logo. Then I learned about the history. The case back has the inscription L.E. above the serial number and the Angelus logo. This is an abbreviation of the Hungarian Air Force (Légi Er?) so you don’t have to be an expert to guess that the watch was issued to the above-mentioned force sometime in the 1950’s. Since I’m Hungarian, I was hyped up by it and decided that I needed to get one, not only for the military past and the history, but because I felt like the watch and I are connected in a thousand ways. You know this feeling I guess: there are no words needed to describe it. 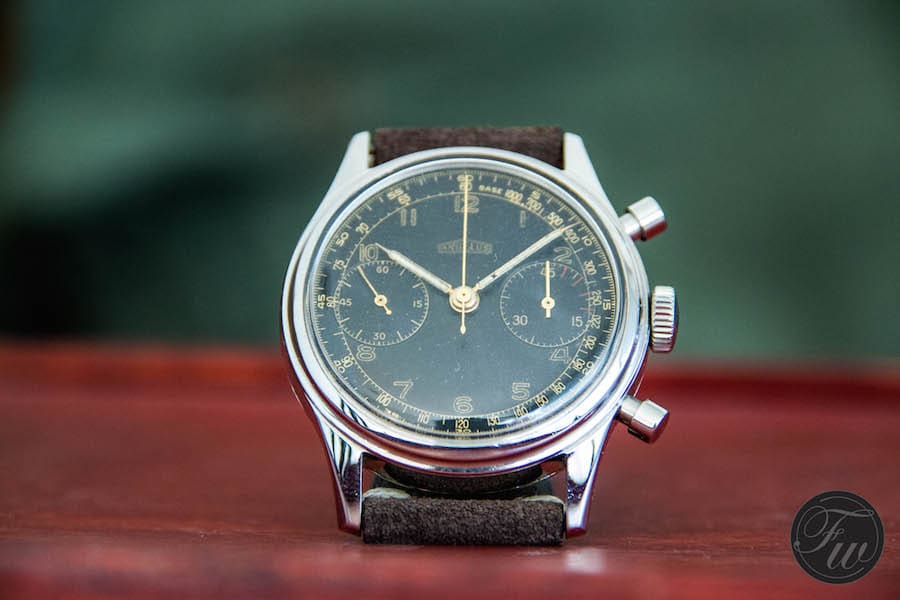 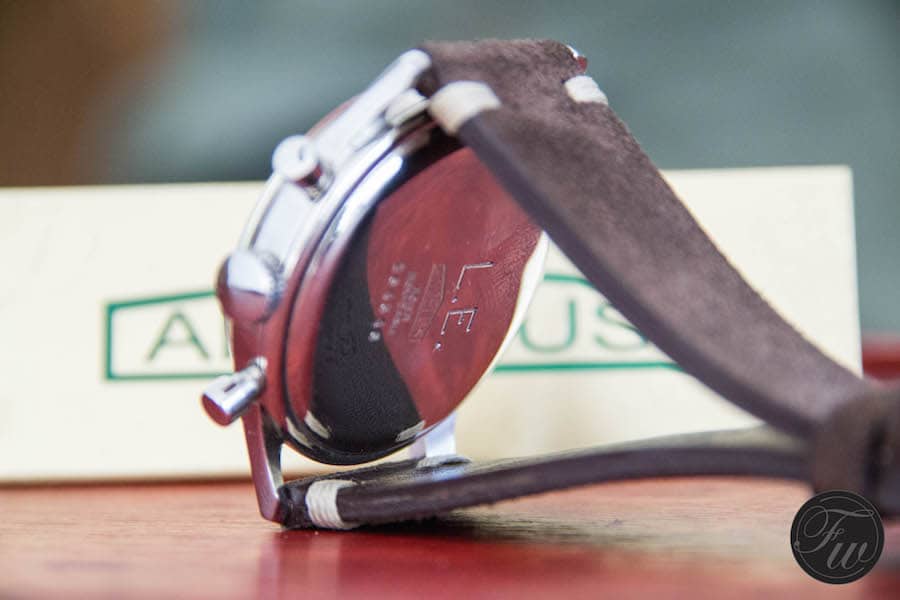 The watch was stayed back of my mind since that time and I looked for it every once in a while on international as well as Hungarian auction sites in the hope that I might get lucky. Needless to say, I found nothing. Then, earlier this year I came to know the wonderful company 10ora10 and one of the heads behind it, Andras. We talked about watches in general and I mentioned to him that if he ever comes across this piece that he should think of me. Well, lo and behold, he delivered and this beautiful Angelus came into his collection. We did not see each other for a good few months but I told him that I was interested and if the price was right. We were scheduled to meet face to face for the first time in many months on a hot Saturday morning in early July, in one of the coffee shops of Andrassy Avenue, in Budapest. I brought some watches, he rolled out his watch-roll, and in-between a Tudor Snowflake and a Speedy Pro we made the deal. The price was more than generous and the fact that it came from him (with known service history) just sweetened the deal. He had one condition though; if I ever decide to sell the watch I can only sell it back to him and for the same price. Good luck with that, my friend…I won’t be selling anytime soon. 🙂 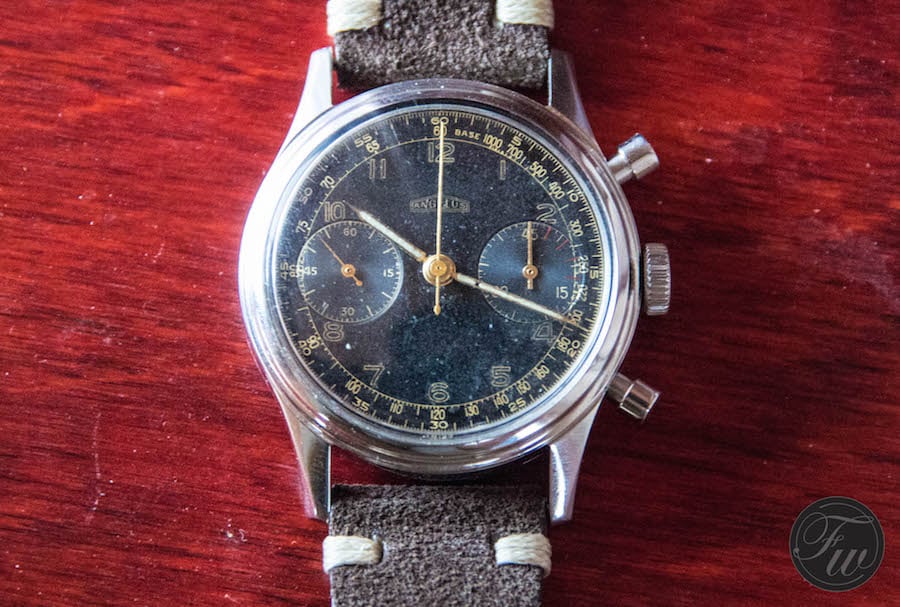 There isn’t much info on these watches on the Internet. As I learned from Dr. Sébastien Chaulmontet – Angelus collector, brand owner and general nice guy – during our meeting in Basel, the archives were destroyed many years ago. The only hope for me to get some inside info would be either the archives of the Hungarian Air Force or any living pilot who was issued this watch issued back in the day. The chances in both cases are very slim. We know that these watches were issued to the Hungarian Air Force in the late 1940’s or early 1950’s but that’s it. We do not know volumes or any other details (if you do, please get in touch with us below) and the serials visible on the case back are sometimes hundreds away from each other so that’s not much help either. 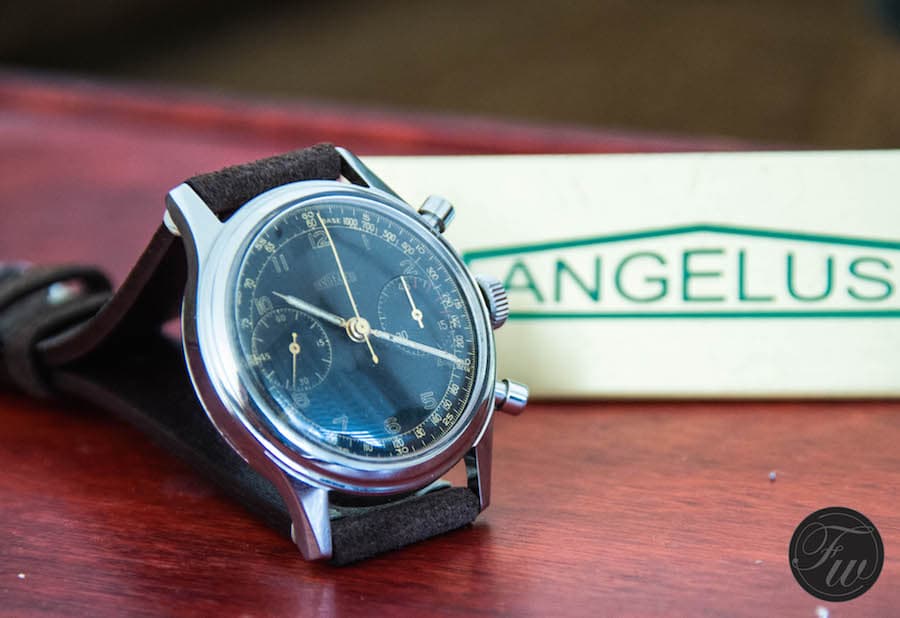 Enough of the history lesson, let’s look at this thing of beauty, shall we? I have to start with my wrist size, which is 7.5”. This unfortunately means that most vintage models, even chronographs, don’t look nice on me, as they tend to wear smaller. Mike is a lucky – and skinny – dude; his wrist can accommodate any vintage piece. The Angelus however is a whooping 38mm not including the crown. Now let’s go back to the era the watch came out: the 1940’s or 1950’s. Can you imagine how huge this looked and felt back then? This was an instrument though for pilots, though, so it had to be large…so large actually that it is now of a contemporary size. At 38mm and on the right strap, now, anybody can get away with wearing it. 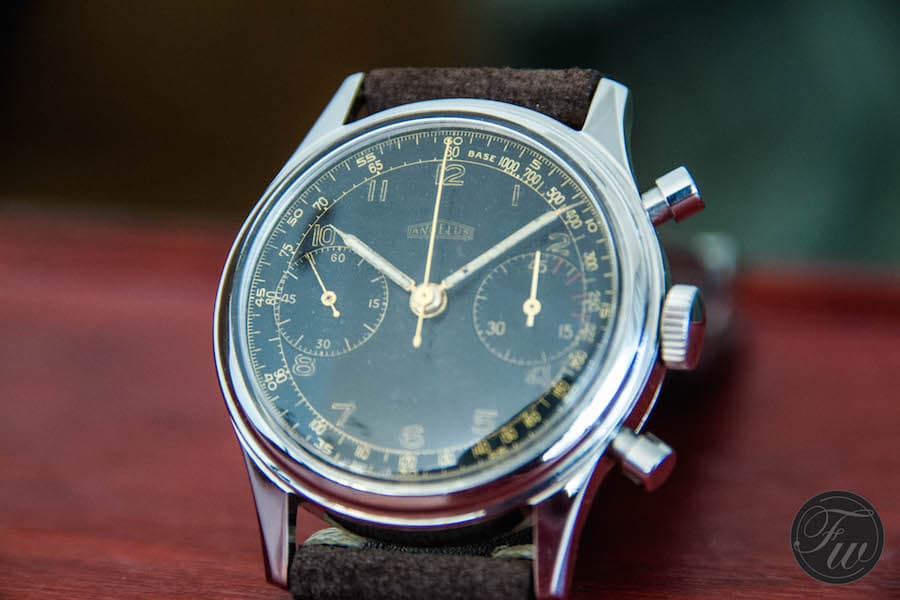 The case is very elegant, round shaped, and stainless steel with simple, classic lines. The only things breaking this harmony are the chronograph pushers. The ones on my example have probably been changed at some point in time to taller ones as the outline of the previous pushers remains. The 20mm straight lugs reach out from the case just enough to give the watch an optically stretched appearance. Its thickness is not so, well, thick and it allows the time piece to sit comfortably on the wrist. Flip the watch over and you see the most important part; above the serial number and the Angelus logo you will find the famous “L.E.” inscription. I read somewhere that this was the abbreviation of limited edition and even though it is obviously a misunderstanding, to be fair it is kind of true. This Angelus is indeed a rare bird, however that L.E. means something else. As I have already mentioned it in the beginning of the article, it means Légi Er? (Air Force) a sign used by the military to mark their issued watches. Similar pieces are the FAP Speedmasters or the Swedish military Lemanias, which all have similar inscriptions on the back. 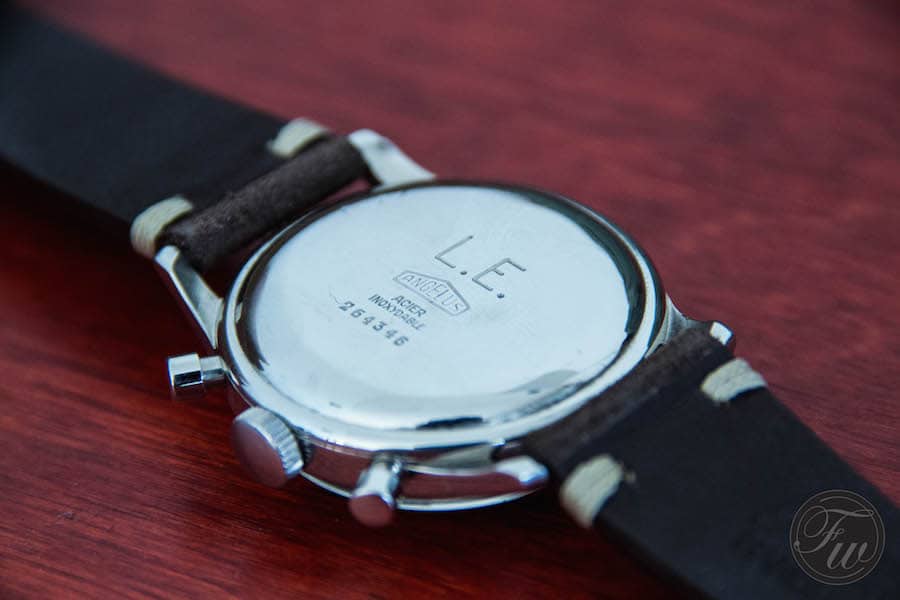 The movement quietly ticking away under the case back is none other than the most known of all Angelus chronograph movements, I think. It is the Angelus caliber 215. It is a very simple, yet robust machine: something that was widely used among the different Angelus styles (I intentionally did not use the word models since there weren’t many named models from the brand). As you can see from the picture, it’s a manual wind, decently designed caliber without much decoration. This movememnt is a proper workhorse that can be a bit tough to service, or so watchmakers have told me, but it also made the brand world famous. Interestingly, today, many years after the closing of the Le Locle Angelus factory in 1991, watch lovers around the world associate this movement with another brand. And now comes the $S25.000 question: Which brand is it? Yes, you know it right, it’s Panerai. When they built their Mare Nostrum prototypes in 1943, Panerai used Angelus caliber 215 chronograph movements to give life to all 3 pieces. Angelus clock movements were also built into early Pam 3646’s and 6152’s. That’s what I call caliber pedigree. Image of the chart below by www.VintageWatchMarket.com. 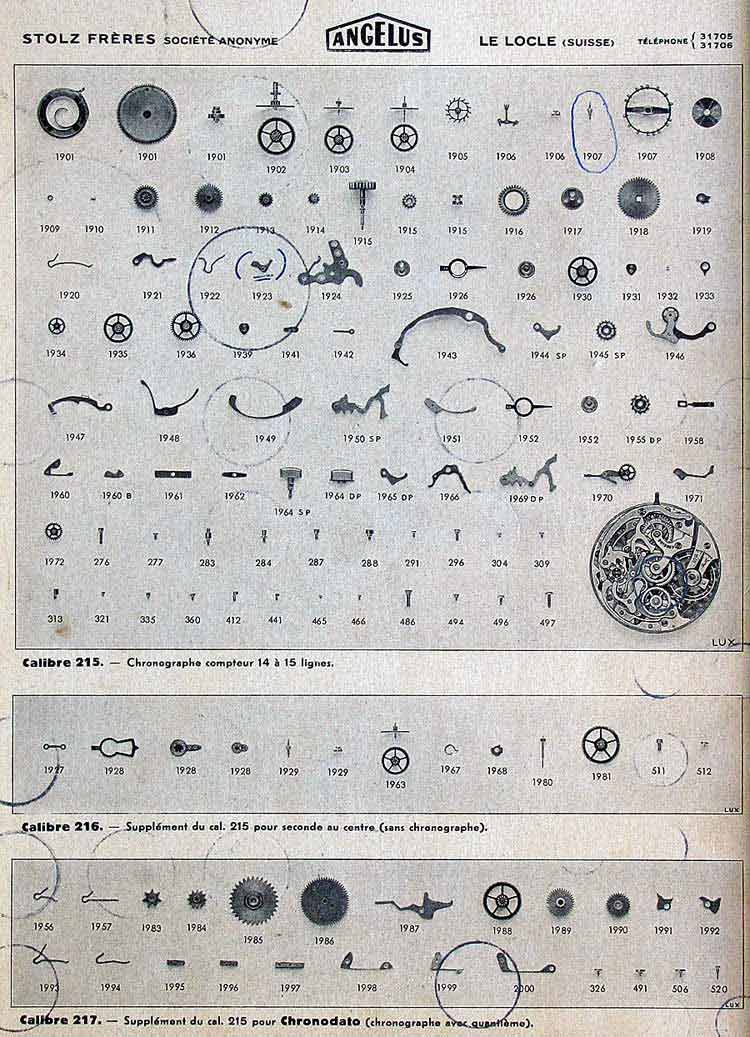 Parts chart of the caliber 215 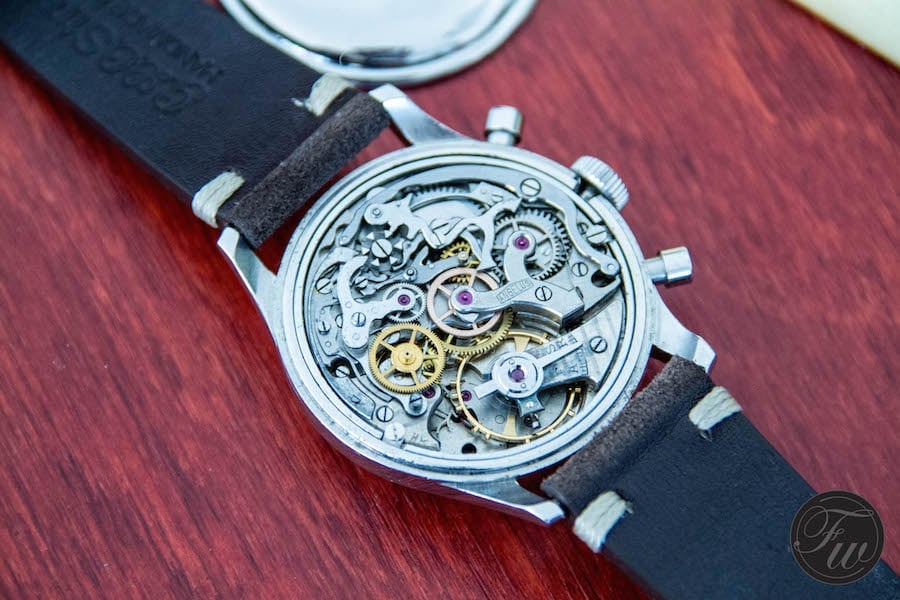 Beauty comes from within, but what does a lovely soul do without a pretty face? Don’t expect anything more than what you have already seen when you look at the dial. The color combination of a black base for the dial with yellow painted numbers and golden hands really finish the watch off for me. Take off the logo and replace it with Zenith or Omega and you would have the exact same looking watch. Other than at 3 and 9 where the 2 sub dials are positioned, every number is visible on the dial. They are not luminous, unlike the hands (which still glow by the way), but beautifully painted onto the dial. The watch has no bezel so the outer ring of the face is quite busy. You can see the grid to measure ground speed elegantly bordering the hour-indicating numbers. Further out, the 60-second counter is placed to assist the chronograph function. The seconds’ sub dial is at 9 and the minute sub dial for the chrono is at 3. The small detail on this sub dial is something to die for. There are little red lines indexing every 3 minutes until the 15-minute marking. Why, I honestly don’t know but it would be interesting to learn about it nonetheless. The Angelus logo is small, almost unrecognizable, under the 12 and that is the only text on the dial. The hands are slim, gold colored indicators of time.  They retain their sheen even many moons after leaving Switzerland to spend its life in Hungary and now only to rest on the wrist of yours truly…in Germany, of all places. 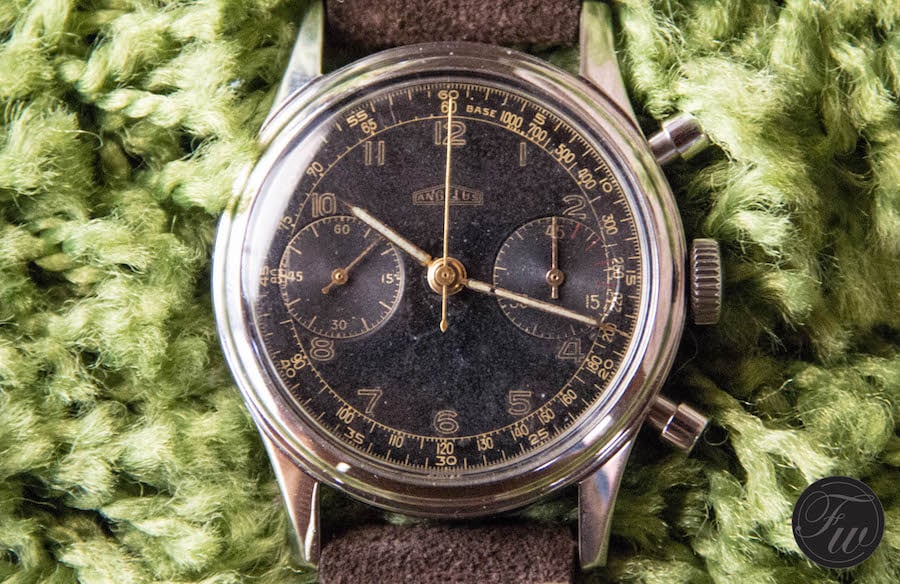 Availability of the Angelus caliber 215 chronograph on the market is pretty good. You can pick up decent pieces for as low as 12-15 hundred euros, but pieces that need attention are available for 4-600 euros. When it comes to the L.E. model prices really play in a different ballpark. It’s a relatively rare, military issued vintage chronograph, so you are looking at the 2k mark when searching for a nice example. It is worth every penny and brings something else to the table when you are looking for conversation starters. I could talk for hours about it but time is limited and so is space. I hope you enjoyed this special #TBT while Mike was away on holiday enjoying the sea breeze, Dom P’s, palm trees. Please don’t forget to comment under the article and share your thoughts about this or any other pieces with us. 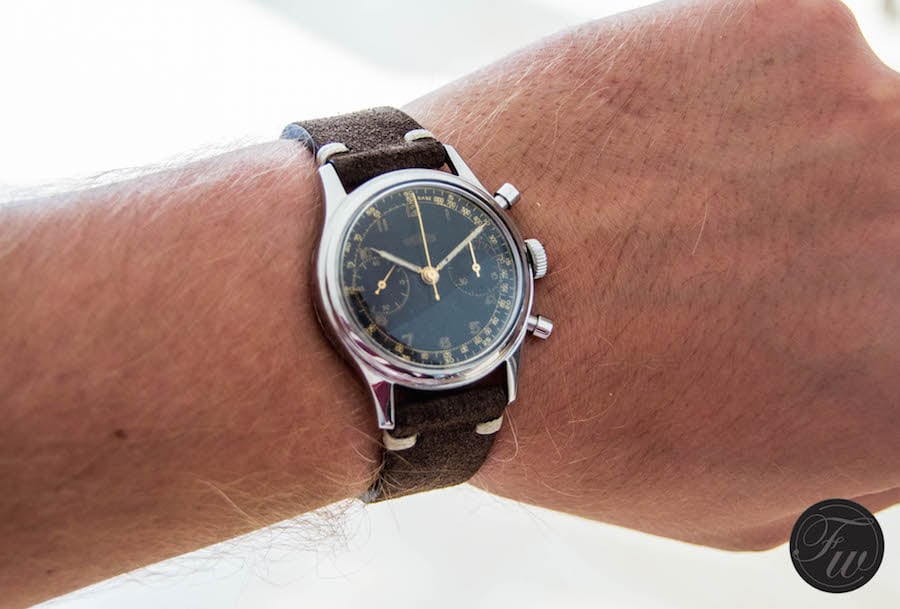 Hot Topics
Introducing: The New Seamaster Professional 300M 60 Years Of Bond — With A Special Animated Case Back
100 comments
It’s Time To Invest In A Dress Watch — Our Picks From Breguet, Omega, Grand Seiko, And More
67 comments
Are You Still After An Omega × Swatch MoonSwatch?
65 comments
Sunday Morning Showdown: The Tudor Pelagos Provocation — Pelagos Vs. Pelagos 39
55 comments
The Rolex Waitlist Conundrum — How Much Will The Price Of Your Watch Increase While You Wait?
48 comments
Popular
Rolex Submariner – Historical Overview Of A Diving Legend
Robert-Jan Broer
22
Rolex GMT-Master History And Overview Of All Major References
Robert-Jan Broer
18
The Ultimate Sports Rolex – The Explorer II Reference 1655
Robert-Jan Broer
17