#TBT Hands-On with the Breitling Chronomat 808

While it’s often overlooked or under discussed when people talk about the most beautiful vintage chronographs, the Breitling Chronomat 808 warrants consideration.

It would be easy to cast this watch aside as a less-equipped version of the far more popular Navitimer, but as we’ll see, that’s a patently unfair categorization. In terms of both intent and history, the Chronomat is truly a significant watch. 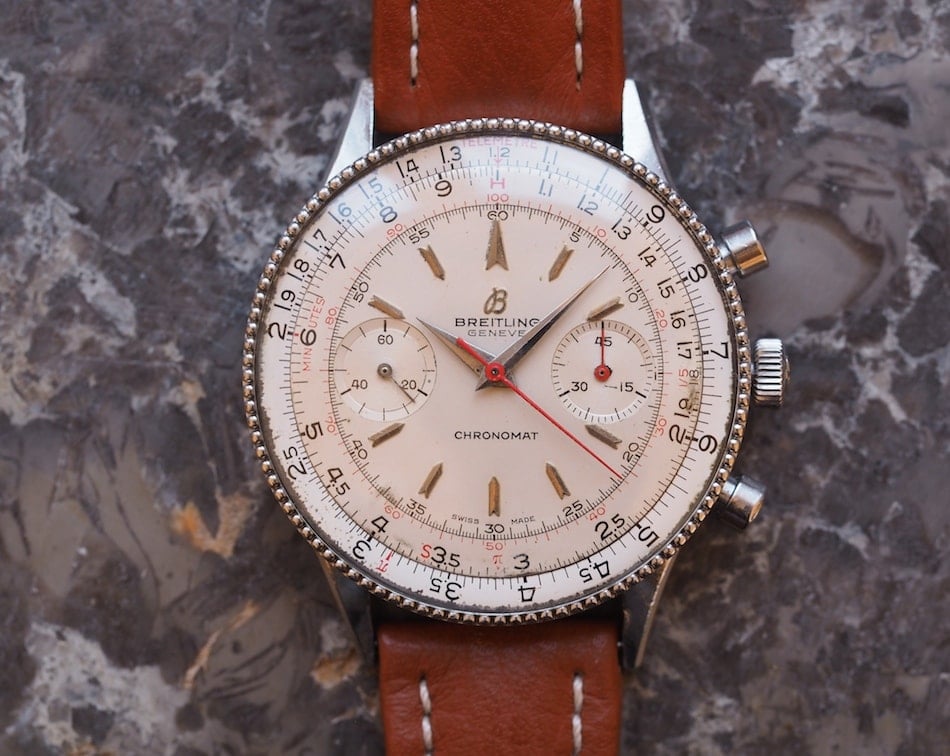 I’ve waited a long time to write a dedicated article on the Breitling Chronomat 808. We’ve featured the model as part of the Breitling Experts Interview article from a couple years back, but there’s been little said since. The reason is pretty simple; the culmination of my procrastination and the diagnosis of how to fix a problem on the watch essentially led to this piece being out of commission for roughly two years. To be clear, my lassitude affected about 70% of that timing. But now the 808 is back and to quote that oft cited line from Peaches and Herb, we’re “reunited, and it feels so good”. 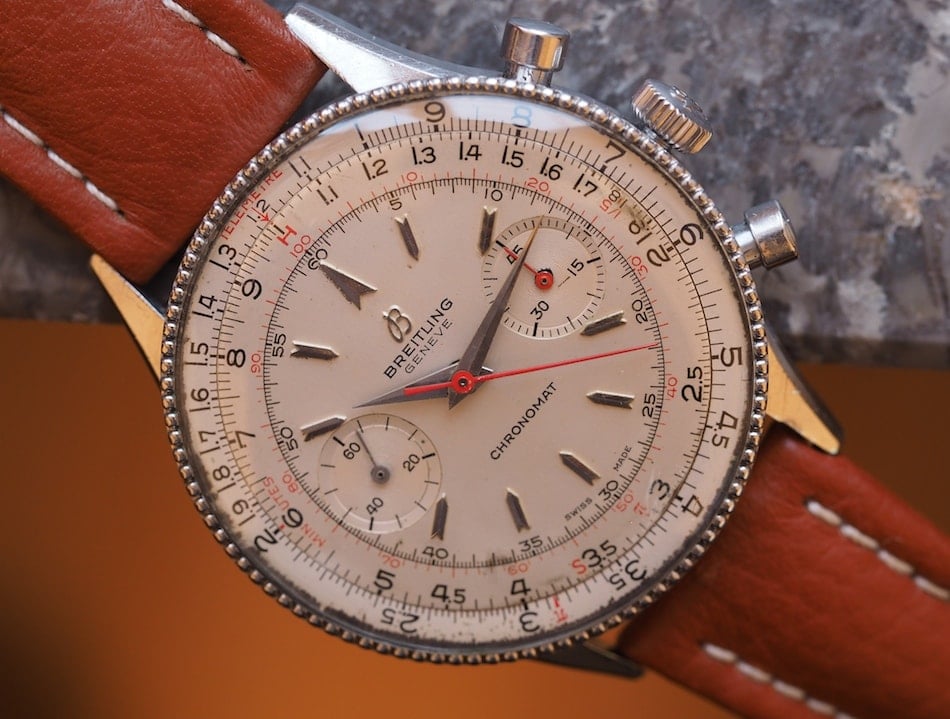 In an excellent posting on Watch U Seek, user “altro” details the long history of the Chronomat. One can see that this watch’s slide rule function was patented in 1941 and released between this year and 1942. This means that the watch predates the release of the Navitimer by roughly 12 years – a sizeable period of time that’s often forgotten by most. Initially released with rectangular pushers and as the reference 769, the original incarnation soldiered on with a number of evolving dial variants until the late 1950’s. During its time, the 769 was always outfitted with the hand wound Venus 175, a gem of a column wheel movement that’s essentially just a 2-register version of the Breitling-standard Venus 178. It came in both steel and gold editions and extremely rare triple register (Venus 178 equipped) variants were offered. In the late 50’s, some say around 1959, the updated Breitling Chronomat 808 was released. 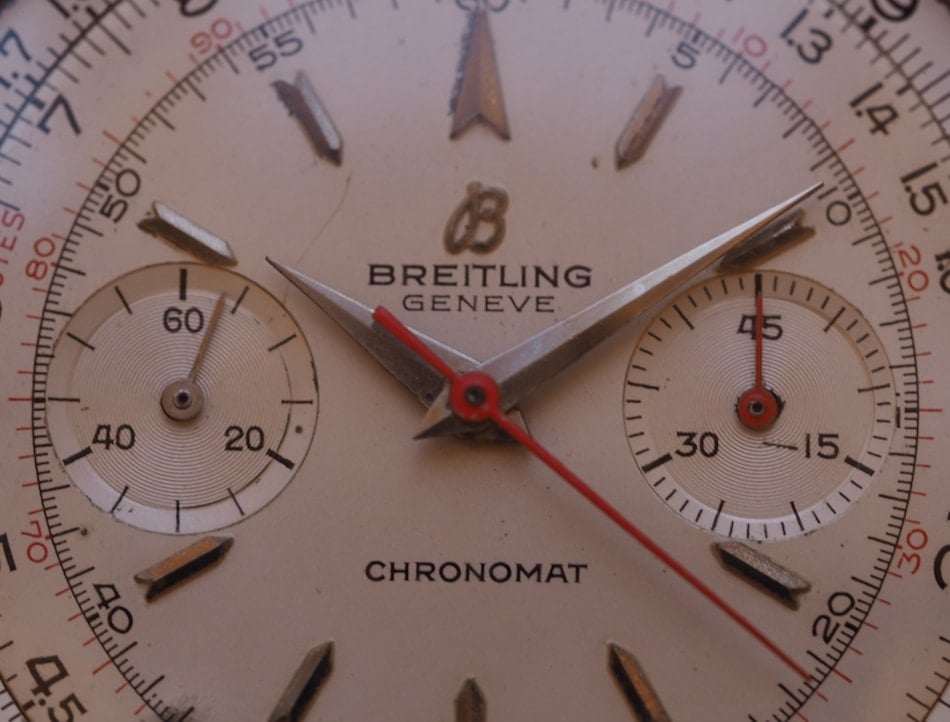 The Breitling Chronomat 808 introduced a major change versus its 769 predecessor along with more subtle updates. Gone were the rectangular pushers in favor of round pump pushers. Big dagger hands replaced earlier needles. Additonally, a larger signed crown joined the fray to help the Chronomat fit in with other Breitlings of the era. Dial-wise, applied baton hour markers replaced former versions often found with Arabic numerals. The Venus 175 remained in place ad the Brevet (patent number) moved from the dial to the snap-back case back. Sadly, although I enjoy the sentiment this watch now contains, my version’s case back was polished off to make room for an inscription that shows it was give to “Marvin” in 1962. Lucky guy… 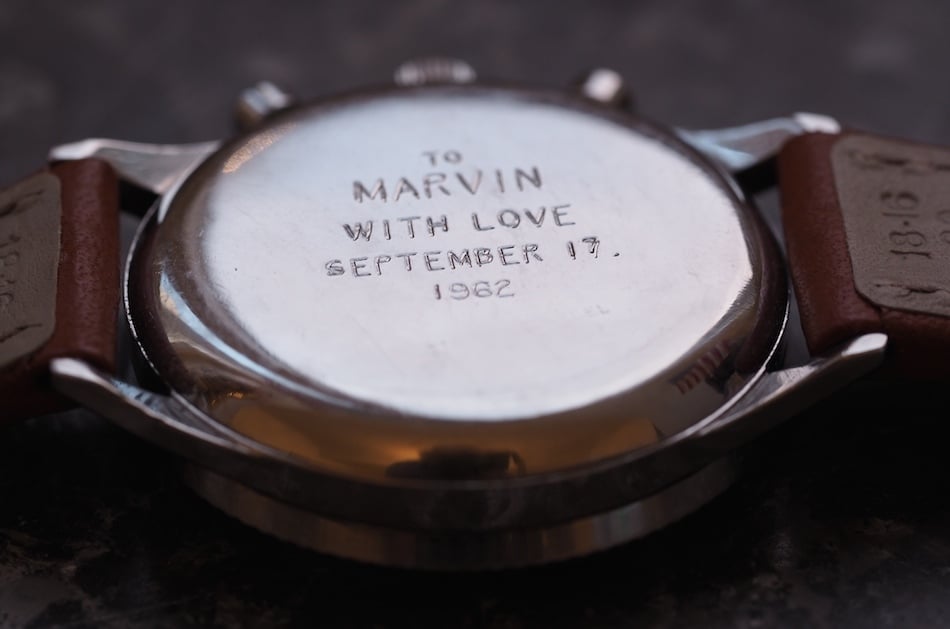 When digging into the initial history of the Chronomat, and this carried through with the Breitling Chronomat 808, the watch wasn’t actually designed for navigational purposes. Unlike the later Navitimer, it seems that the Chronomat was made for engineers, mathematicians and those who made it their task to solve problems. The aforementioned posting on Watch U Seek, maintains that the Chronomat was second to the market as a slide rule watch, but it seems it was first to combine the practical tool with a chronograph. Whatever the case, we can certainly state that this Breitling was the first popular watch with a Slide Rule. The article also states that no mention of the watch’s use for pilots can be found until a late 60’s AOPA advertisement makes the link (the 808 gave way to a much different, automatic Chronomat in the late 60’s). Think of this as a dressier 1940’s version of the 1980’s Casio digital calculator watch and you’re in the same ballpark, er – classroom. When taking a detailed look into the cosmetics of this Breitling Chronomat 808, it becomes clear that this is one amazingly attractive chronograph. With its slender, chamfered lugs, a Breitling calling card, 36mm case size and 18mm lugs, the Chronomat straddles the fine line between tool and elegant watch. 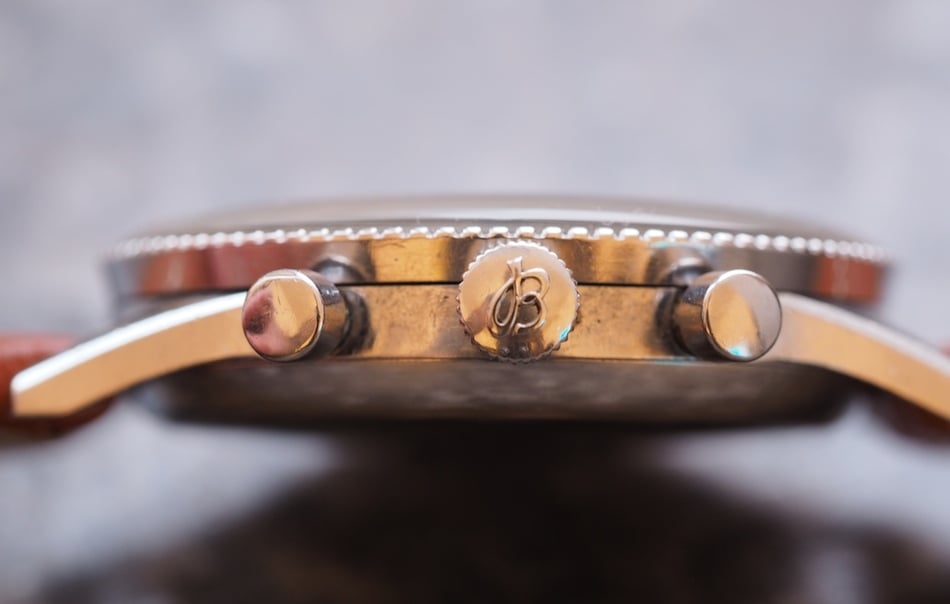 But taking a look at the watch from the side and seeing how the bezel overhangs the case and angles outward, it actually measures in at over 37mm in diameter. That angling attribute, by the way, is extremely similar to the ultra rare “wide bezel” Cosmonautes that were later introduced when Scott Carpenter requested such piecesfrom the brand for space exploration purposes. The bezel, which is beautifully beaded, is easy to turn but contains a bit more tension than in the Navis and Cossies I own. 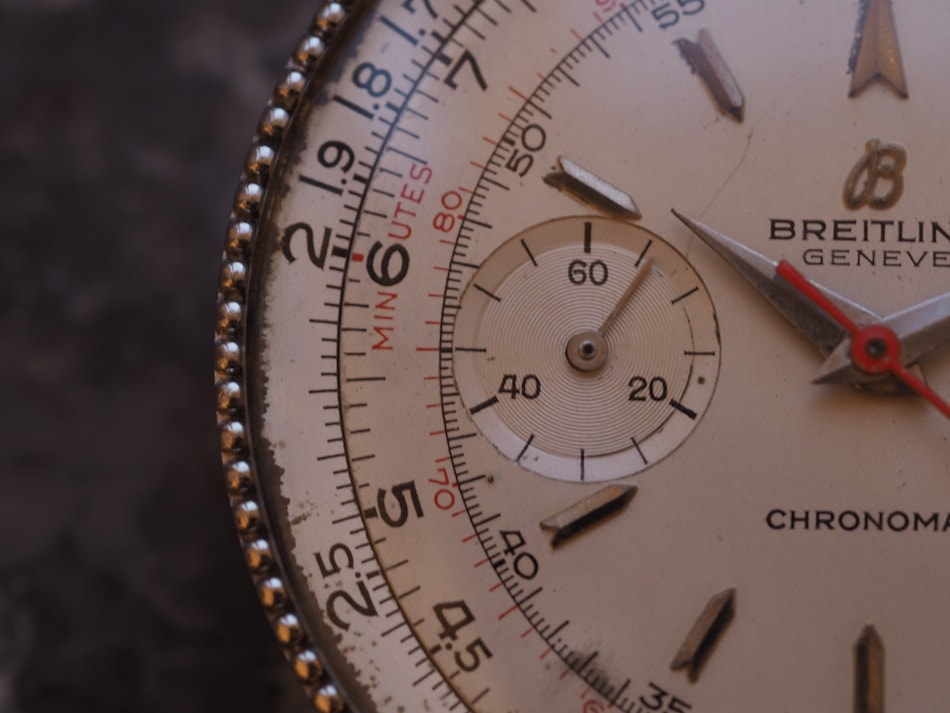 Dial-wise, there’s only love from my side when it comes to the Breitling Chronomat 808. The layout and spacing are simply perfect. When viewed at just the right angle, the silver color takes on an eggshell sheen – it’s gorgeous and the quality is as good or better than anything from the era in my opinion. The same can be said about the choice of orangey red for the central chrono hand, rightmost sub register hand and font. It’s such a unique color choice versus the typical black or chrome and it works wonders with any type of brown leather strap. Those nickel plated main hands make a fairly bold statement and work well with the dial – taking up a bit more space than the hands found in earlier Chronomats. 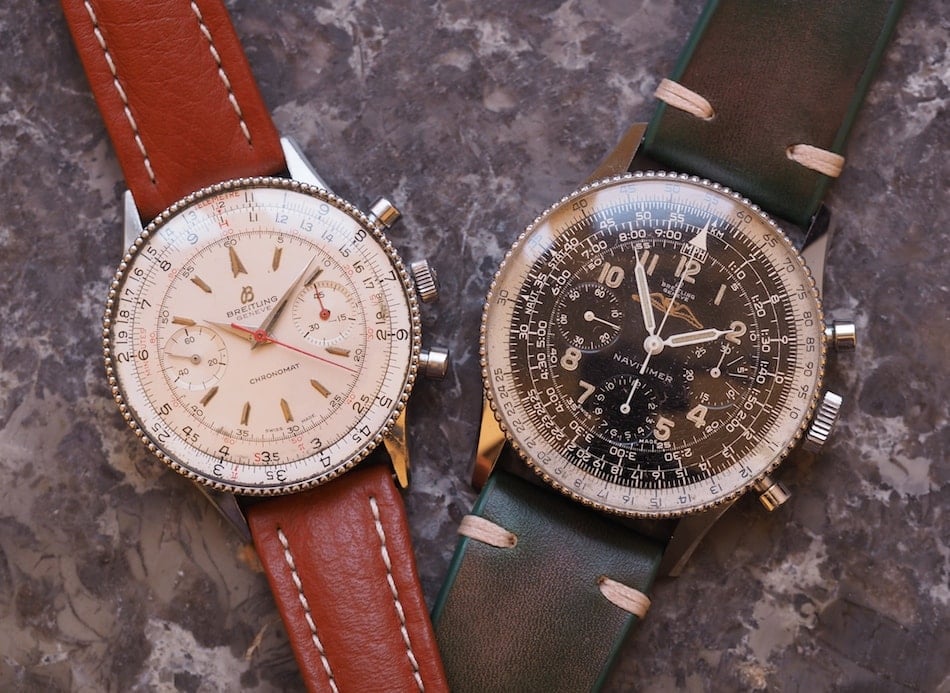 If there’s one “beef” I have with vintage Cosmonautes and Navitimers, it’s that their crystals portray a vast expanse of fragility. Combine this with a total lack of water resistance and bezels that spin as freely as Robert-Jan on his Technics SL1200s and I must confess that wearing these big watches feels precarious. Yes, they’re deservedly seen as icons, but they’re just not that practical unless you live in a dry room made solely of pillows. The Breitling Chronomat 808, in my view, gets it right. You have all the trademark Breitling looks, but the size is far more wearable and it feels a bit more solid. This is all despite a slim profile of roughly 11.5mm. 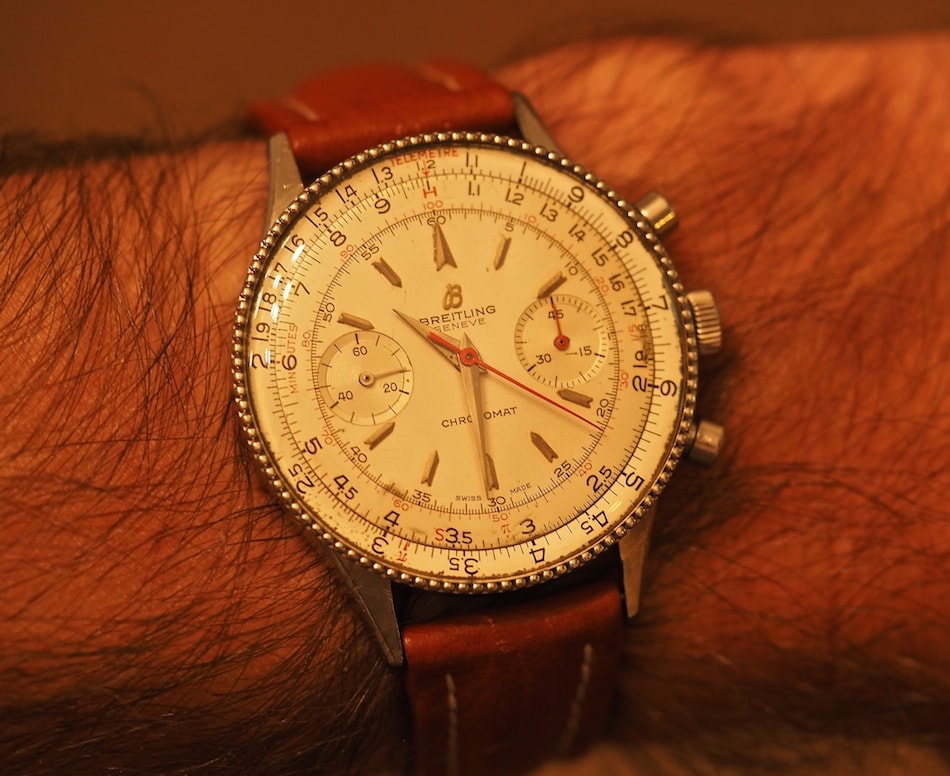 On the wrist, the Breitling Chronomat 808 is a dream. Light, comfortable and as happy being paired with a sit as it is jeans and a flannel, this watch can go anywhere provided that anywhere isn’t the beach! With a lug to lug length of over 44mm (a Navitimer comes in at 49mm), it should satisfy the grouches out there decry the I find the round pushers more to my liking compared to earlier rectangular pusher versions, but that truly comes down to personal preference. I paired the watch with a modern Breitling strap and flip buckle. I like it and will likely leave it, but I could easily go with light tan – @watchfred won’t stop telling me how it will make the dial “pop”. 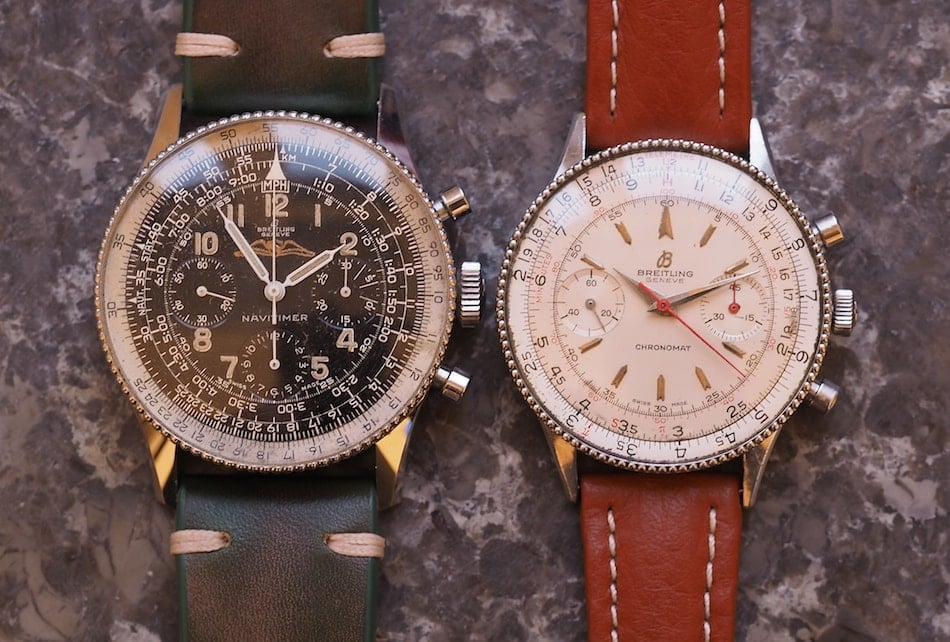 I bought this Breitling Chronomat 808 roughly two years ago from a dealer in Philadelphia for about $1400. This was a nice deal then, but it’s a steal today. Good Chronomats regularly cross the $3000 mark and rare versions (like early 769’s) now see $4000+ with relative regularity. Be on the lookout for dial damage – this one has a touch, but it’s deemed as quite presentable in Breitling circles – that often leads to redials. Additionally, incorrect hands and other parts are typical as well. 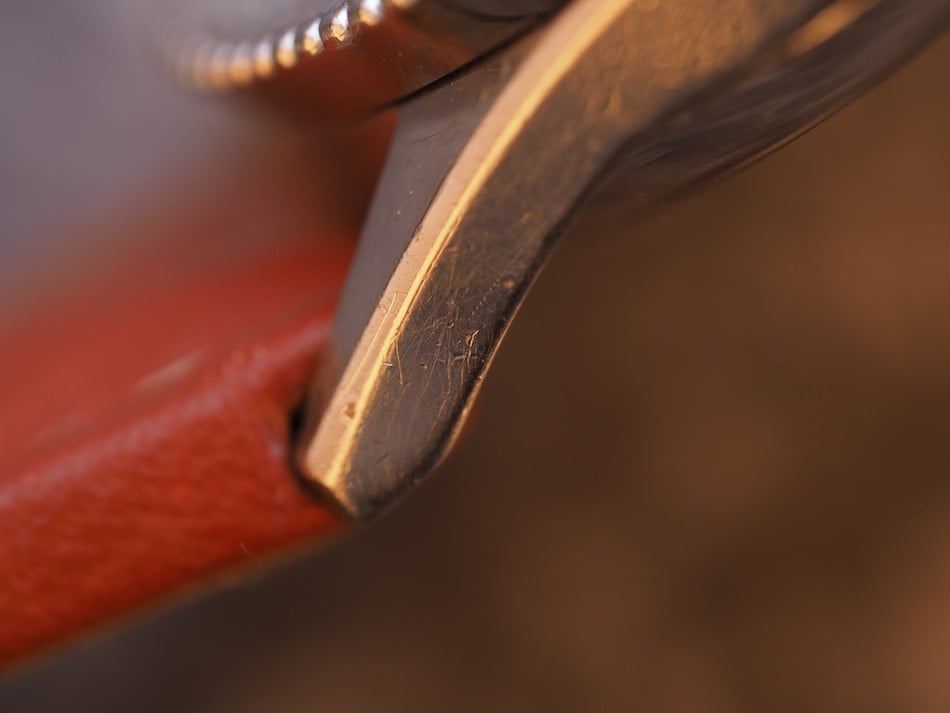 I can remember receiving this Breitling Chronomat 808 – my wife brought it with her from elsewhere in the USA and handed to me when I was severely jet-lagged at a hotel in New York City. I swapped the Breitling strap for a brown suede piece and went to dinner. In my lethargic state, I thought something was off with the watch, but I left it until the next morning. Upon waking, I took a look and, yes, the lower left lug was bent inwards. Disappointment set in, but Fred told me it should be a simple fix. Well, I waited for over a year before sending it to Paul, our resident watchmaker, and he wasn’t overly comfortable with giving the old lug a yank (I even tried to persuade him to do it after a couple drinks of Kentucky’s finest), so he sent it off to another watchmaker friend (these guys have a network!) who specializes in such things. Then, the issue was solved in short order and now the watch is back. Anyhow, the moral of the story is to check on such things – something I’ve now stopped taking for granted. 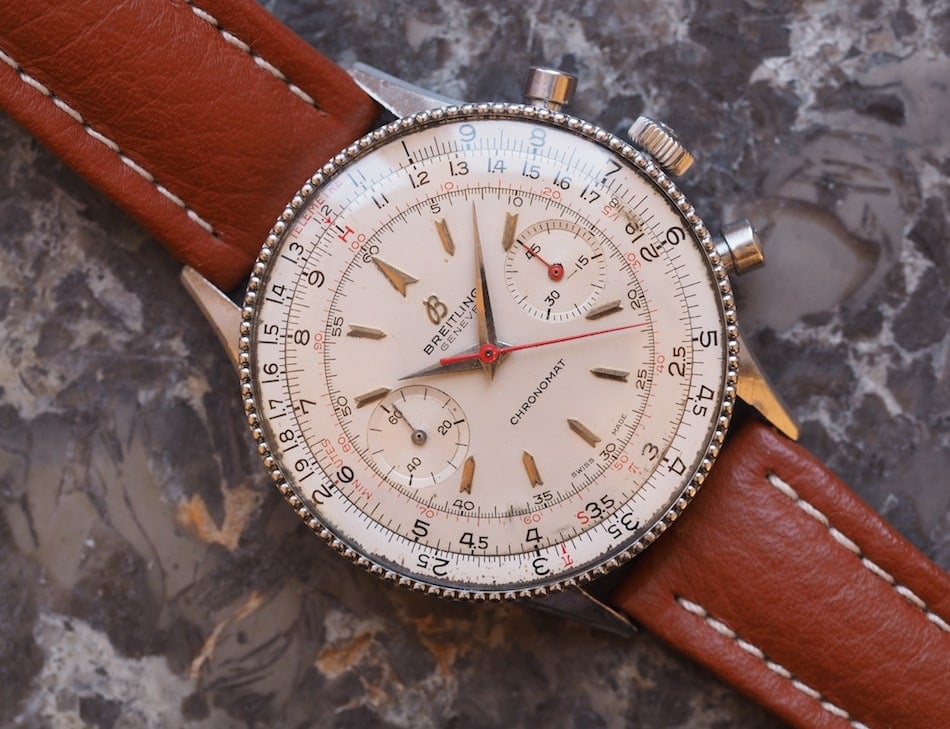 We’ve featured a decent amount of Breitling on #TBT and yes, readers, there will be more. With the appointment of Georges Kern at the helm of the storied brand and our friends @watchfred and @rene_jk starting to have a bit of involvement in what will likely be seen as a reinvention of the marque, we think there’s reason for excitement. If they can recapture just a part of the magic from watches such as the Breitling Chronomat 808 in future releases, then consider our collective interest piqued.