Today, on #TBT, we take a look at a Calendar Auto Orient Diver, another rare 1960’s Japanese diver.  Oh, and Happy 4th of July!

Unless you’re a real Japanese watch otaku, this could easily be the first time you’ve laid eyes on the Calendar Auto Orient Diver ref. T19735.  It’s not a common watch and it’s a watch that I’d only seen a couple times in the back corners of forums when curious folks decided to ask what it was and what it might be worth.  Replies to such questions were often nonexistent.  But when you’re cruising through sales and auction sites in Japan, you stumble upon things – lots of things.  In fact, I recently took ownership of a decent tranche of relatively uncommon Japanese pieces that we’ll be featuring here on Fratello.  This Orient happens to be one of those watches and due to its easy on the eyes looks, I figured it was a good place to start. 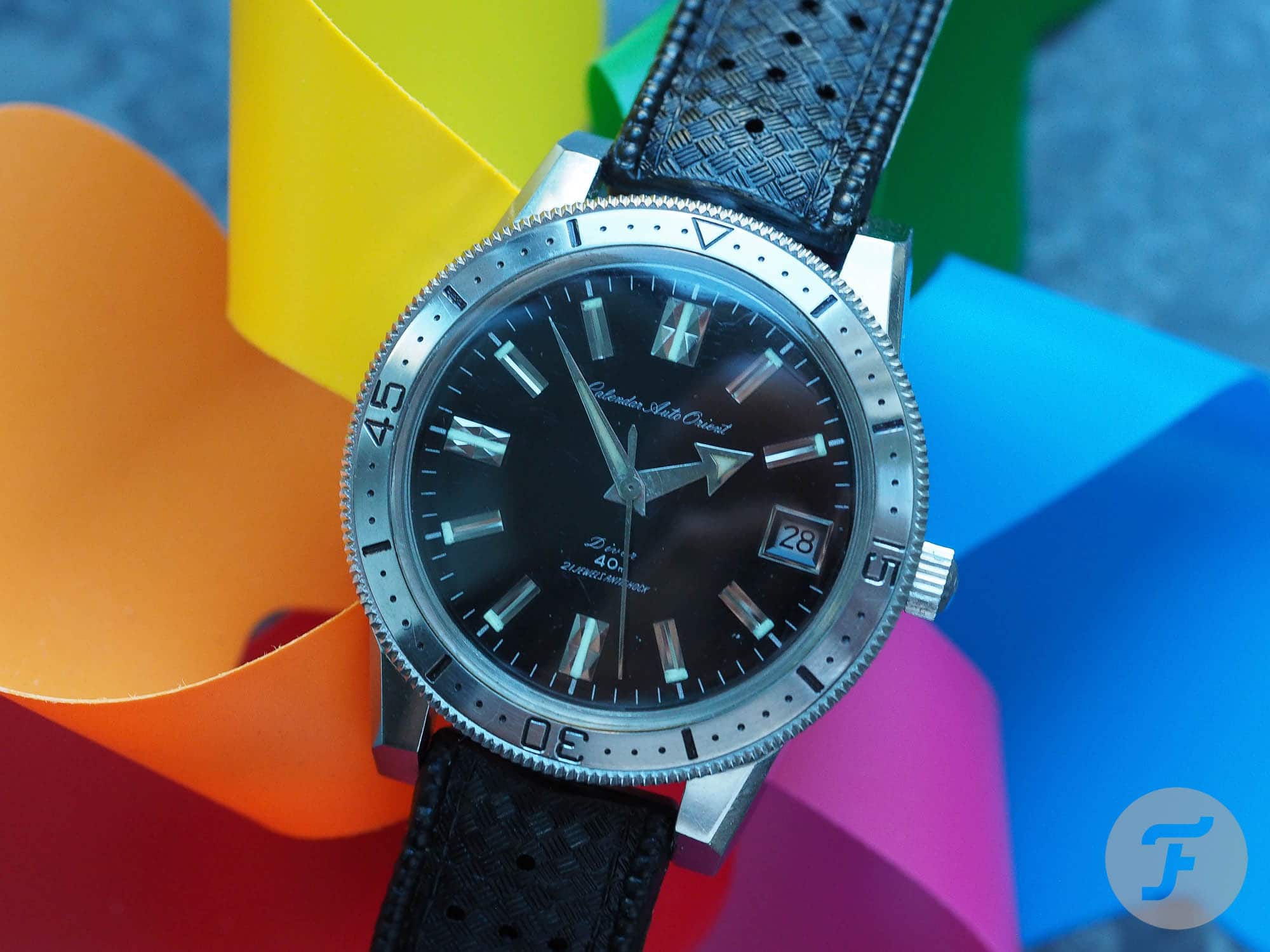 This Calendar Auto Orient Diver isn’t the first time we’ve covered a watch from the brand.  It was actually about a year ago that I took a look at another diver, a Weekly Auto Orient King Diver, and came away impressed with the size and looks of the watch.  Yes, it was a bit of a compressor poseur, but it had a cool movement and some serious overall presence.  With today’s watch, we get something that has standard diver looks, but with some unique style on the case. 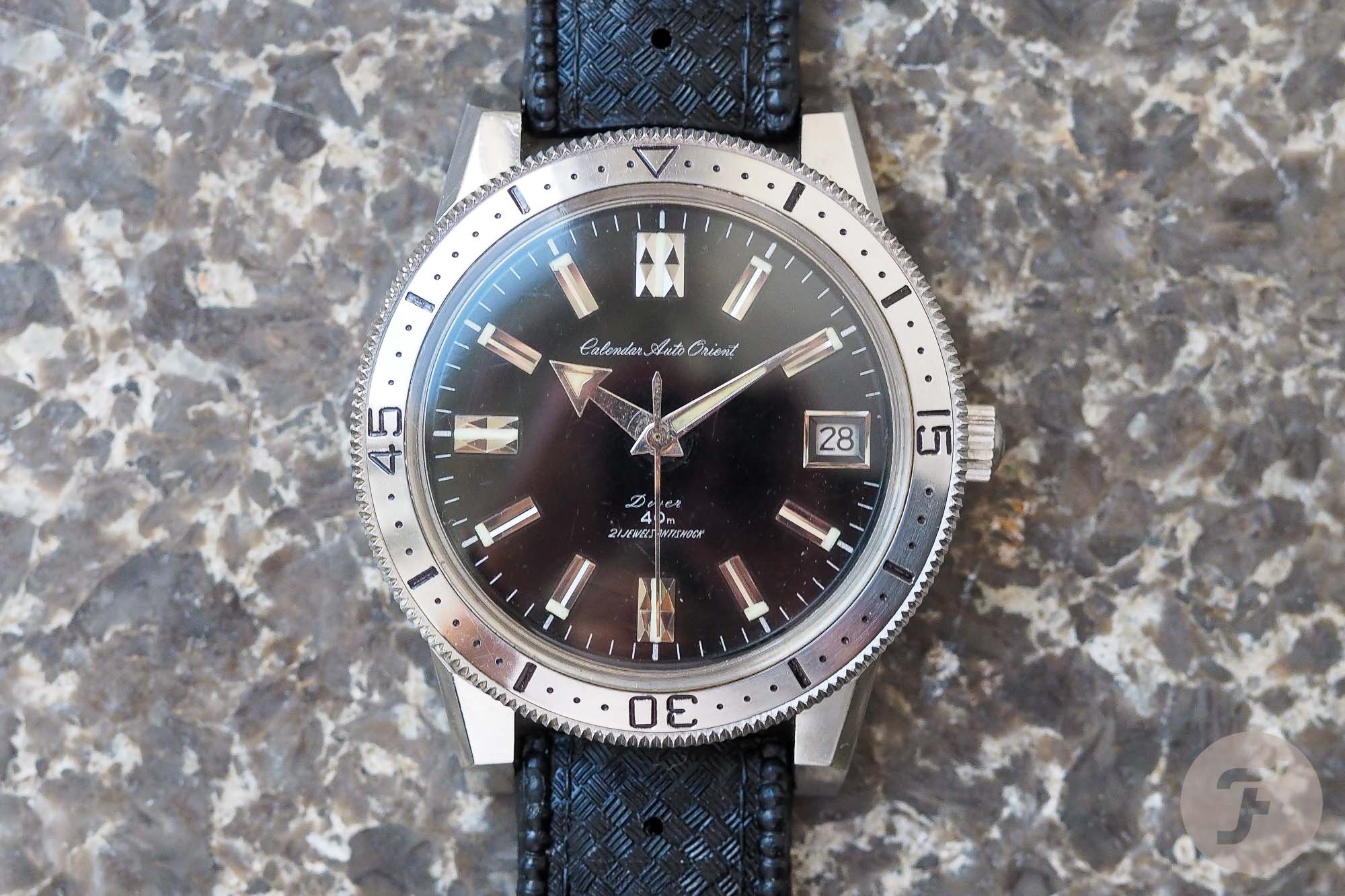 40 Meters – Another Light Diver from Japan

40 meter divers were clearly “a thing” in 1960’s Japan and the Calendar Auto Orient Diver clearly falls into that category.  We’ve taken a look at several of these so far and despite the fact that many of you (you’ve told me, albeit in a friendly way) don’t possess the odd love I have for these early attempts at recreational watches, you’re still going to see more of them.  Whether it’s the aforementioned King Diver, the Seiko Silver Wave, or the Citizen Uni, the trend of light divers was about as big in the 60’s as the water resistances were small. 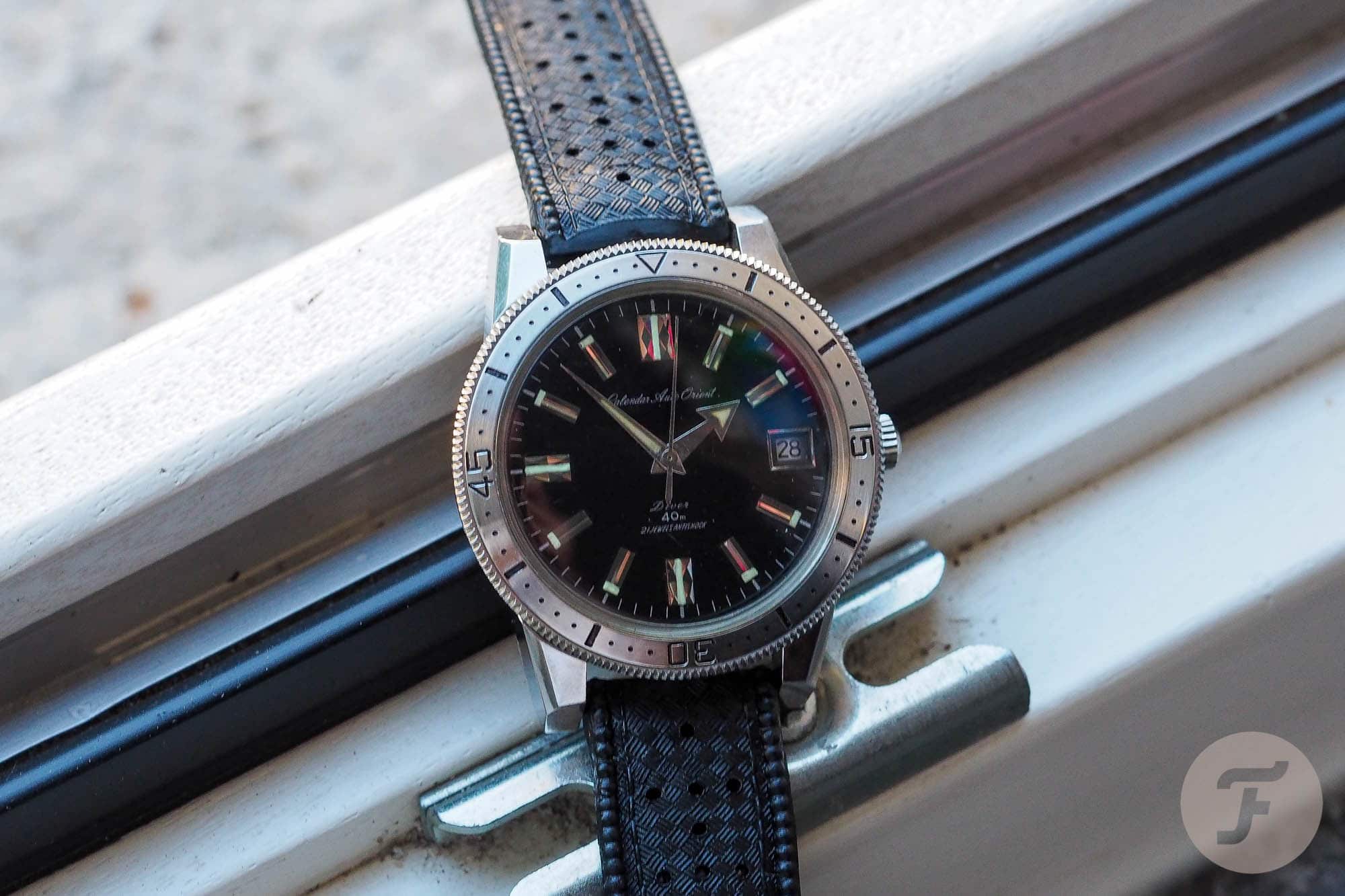 Rare with Little Information On the Internet

This Calendar Auto Orient Diver reference T19735 is a watch where little information exists on the internet.  Via my amateur sleuthing, I’ve found similar models often with the same reference number, but with different dials, black bezels, and even models flat/non-turning bezels using the same dial.  Due to the materials employed (more applied indices) and just the general styling, I’d put this Orient more towards the later end of production versus earlier.  You’ll see that this version contains a case-colored insert on its uni-directional dive bezel.  I love the earlier Orients as well, but the variant you see here looks incredibly clean and, in some ways, almost modern.  Ok, modern might be going too far as I think of the Tudor Black Bay Steel with its steel/aluminum bezel and that’s trying to be retro.  So, perhaps timeless is a more apt descriptor. 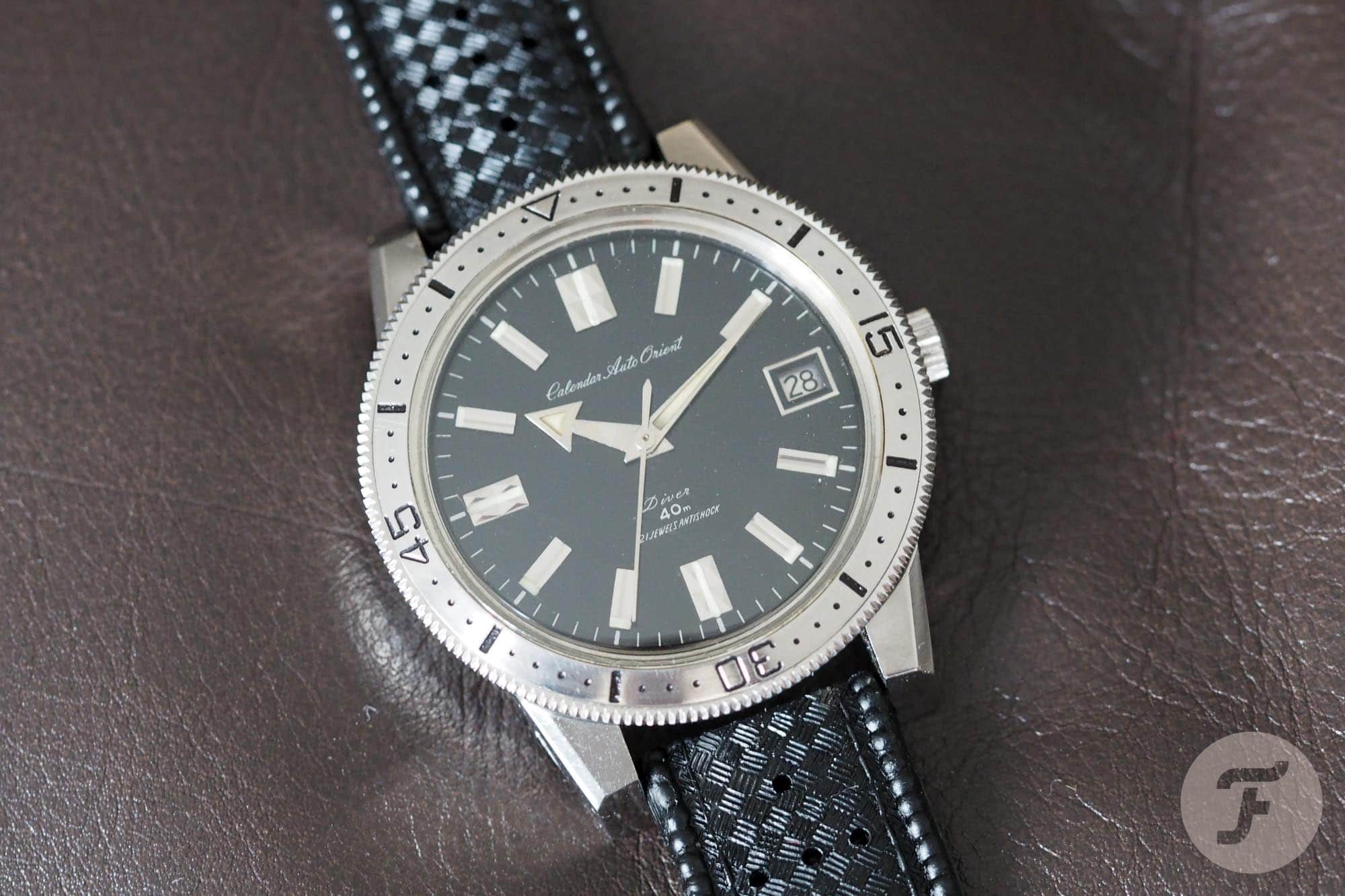 The dial on the Calendar Auto Orient Diver is a classic with its applied, luminous indexes.  They look fairly simple at first glance but the 6, 9, and 12:00 markers are fashioned with jewel-like sides that come to a point.  It adds some subtle “razzle dazzle” to what is otherwise a very serious dial.  I’m also a sucker for the silver and lumed arrow hour hand and dagger minutes indicator.  Yes, Orient chose to add a date function on this model, but the date wheel with its white background works pretty well wit the fine white font that’s used on the rest of the dial.  Curiously, Orient went with a nearly flat acrylic crystal.  It, along with years of micro scratches, made photographing this watch a real chore, but in real life, it’s not a detractor.  Still, something domed might have “warmed up” the look a bit more. 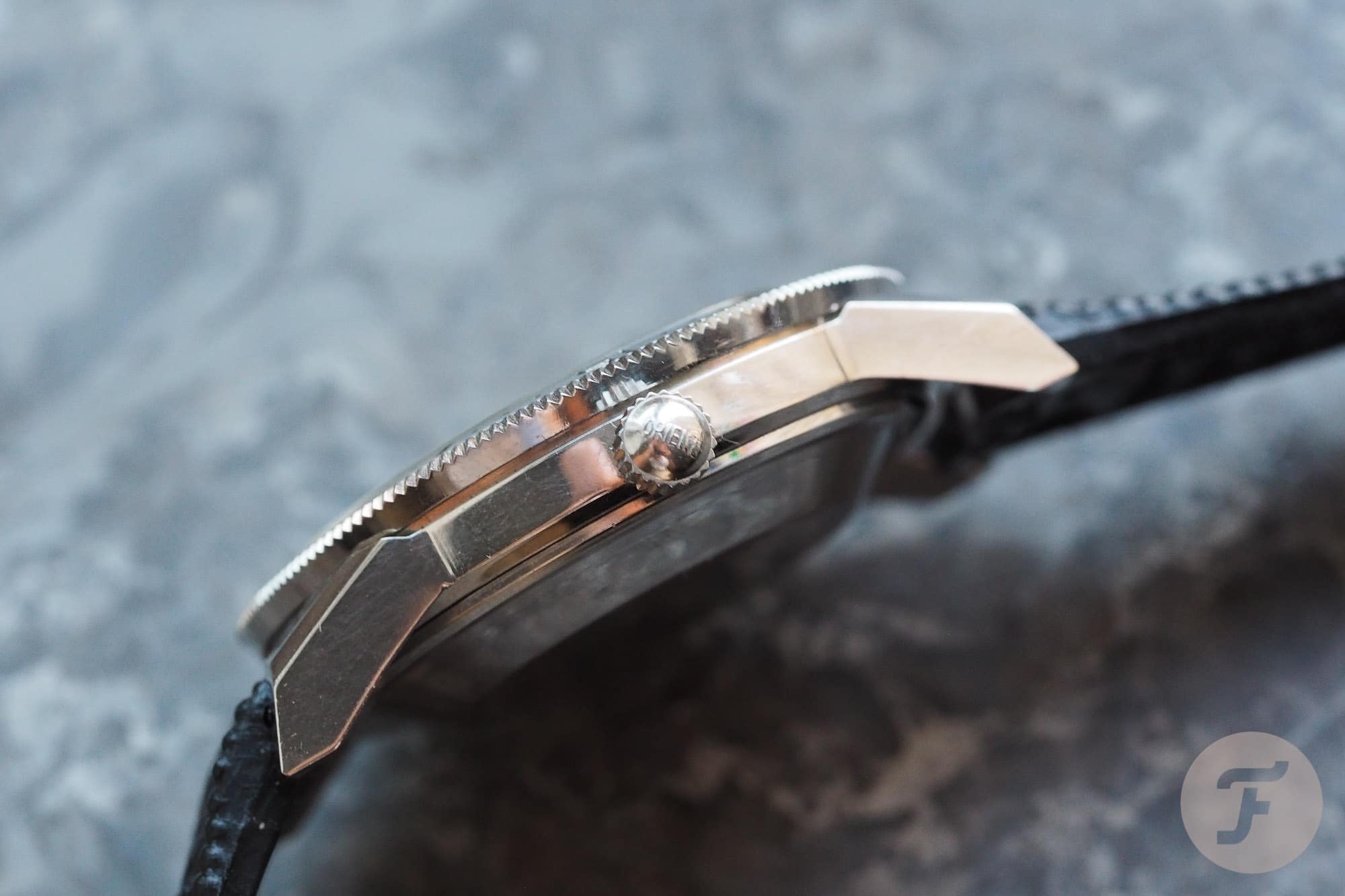 I mentioned the uniqueness of the 38mm stainless case on the Calendar Auto Orient Diver and I’d draw your attention to the lugs.  From whatever angle you can see that they’re pretty unique amongst so many of the copycat 60’s dive watch cases (I’m looking at you, skin divers).  I’d go so far as to call them ornate, but they’re a real difference maker on the watch.  One thing I often hear from die hard Swiss watch collectors is that they often find early Japanese watches to be copies (sometimes poor, sometimes oddly better) of existent Swiss watches. 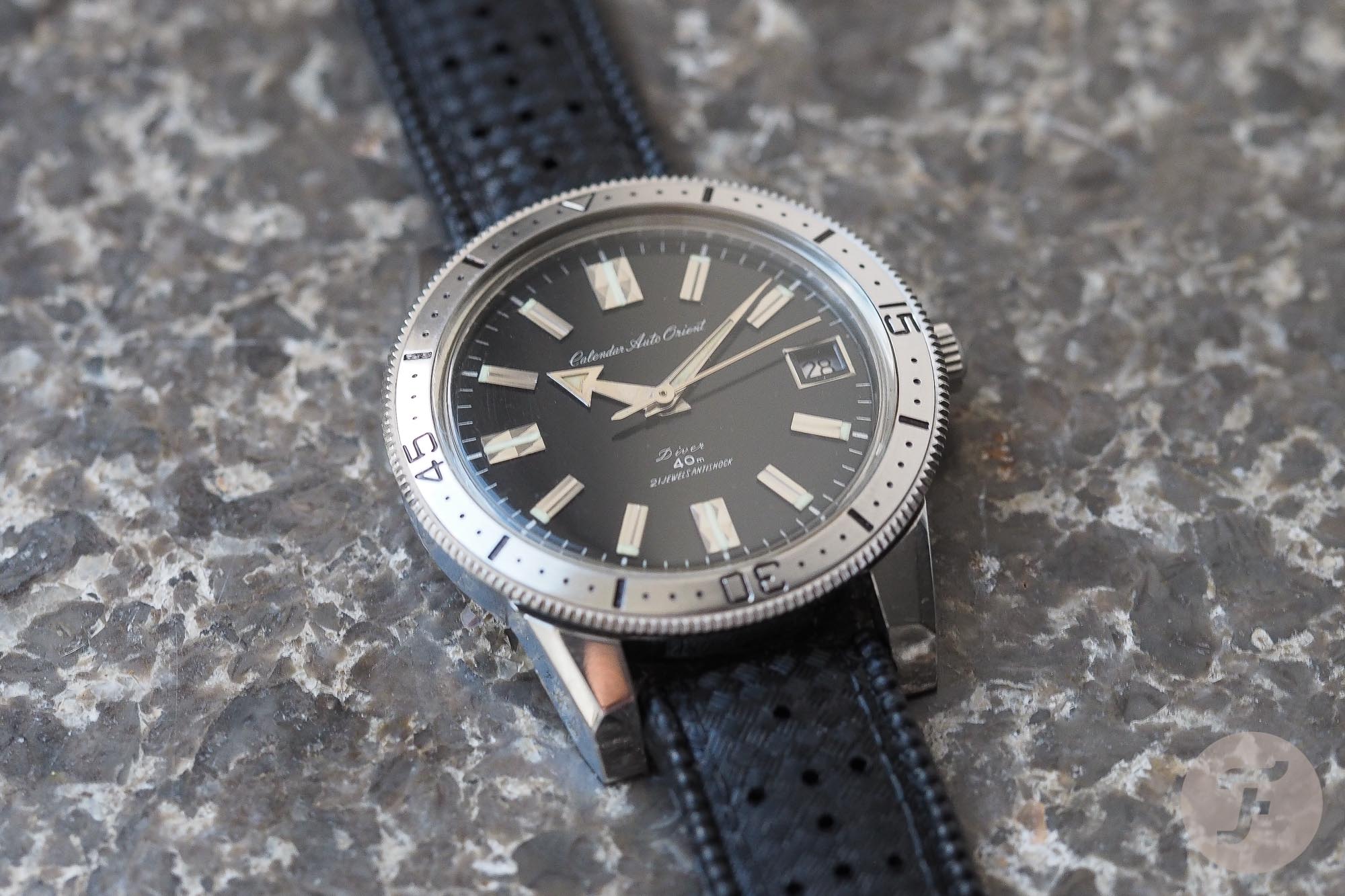 This case is decidedly different and it should satisfy even the harshest of critics.  The lugs are thick from a top view, but they actually slope downwards dramatically.  From the side, they’re also thick, yet they drop off towards the case to make room for the bezel.  This creates a very slender mid case that truly feels very 60’s.  I like it; the execution is formidable and delicate all at once. 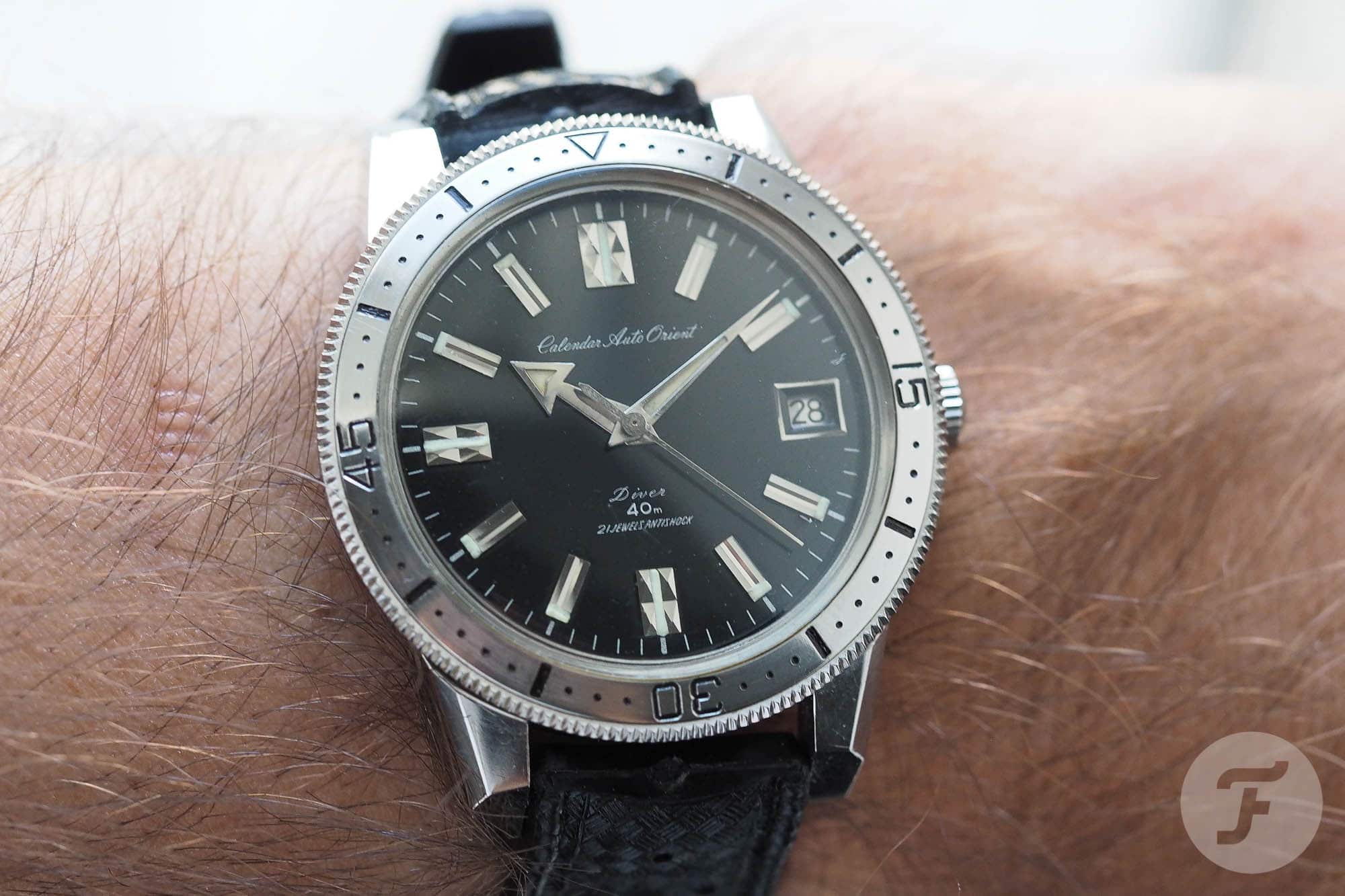 I’ve seen these Calendar Auto Orient Diver pieces on factory stainless bracelets before, but this one arrived with a vintage 18mm rubber strap that was likely made from a Tropic mold that found its way to Asia after the closure of the company.  It’s extremely supple and easily the best non-Tropic, Tropic I’ve held if that makes sense.  It also looks perfect on the watch and my wrist. 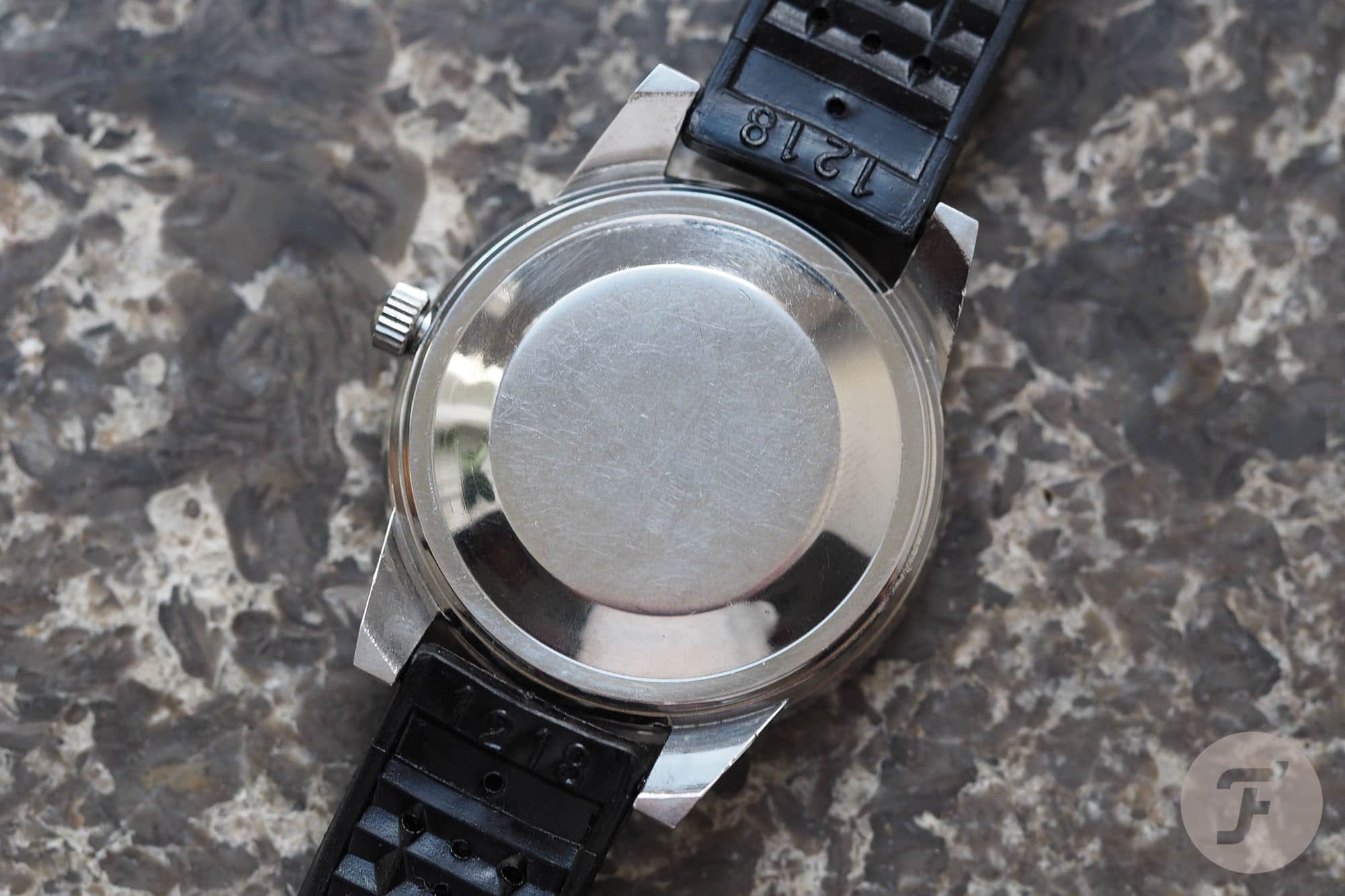 Flipping the Calendar Auto Orient Diver to see its backside reveals what looks like a plan snap back.  Actually, there’s some fantastic engraving that’s now highly worn and only visible under the right lighting or under a loupe.  A big, 60’s-looking font stating “Diver” is there along with “perfect water proof”, “stainless steel” and the T19735 reference number.  Inside, we have a 21 jewel automatic that can be handwound via the signed crown.  It’s not quickset, but the date can be hustled along by moving the hands back to 9pm and forward past midnight. 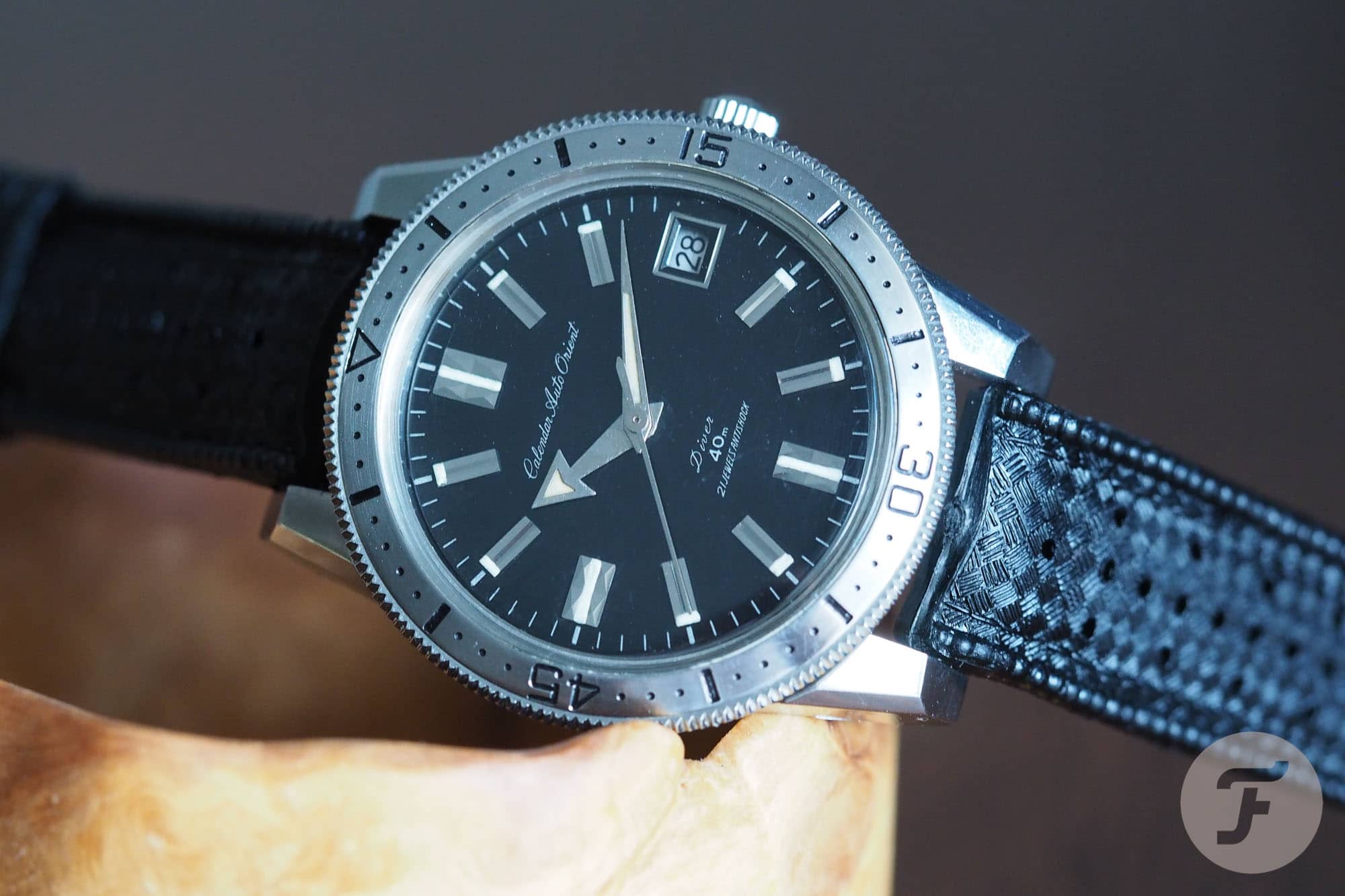 Buying a Calendar Auto Orient Diver in any variation is a lesson in regional preferences.  I say this because watches like this are hot in Japan.  They command big money: we’re talking about a minimum of $1,500 and that’s along with seriously fierce bidding if it’s an auction (this one garnered over 40 bids).  That kind of pricing is hard to put into context if you’re a die-hard fan of non-Japanese watches, but the finishing, rarity, and overall design of this Orient make it a worthwhile piece of history to collect.  If you’re not fully convinced, rest assured that we’ll have plenty more that Japanese to share with you from the early to mid-60’s.  Happy hunting…

Hot Topics
Are You Still After An Omega × Swatch MoonSwatch?
108 comments
Introducing: The New Seamaster Professional 300M 60 Years Of Bond — With A Special Animated Case Back
107 comments
Introducing: The Oris Divers Sixty-Five Fratello Limited Edition
104 comments
It’s Time To Invest In A Dress Watch — Our Picks From Breguet, Omega, Grand Seiko, And More
74 comments
Rolex Is Going Certified Pre-Owned
66 comments
Popular
Oris Classic Date Or Save Up For an Omega De Ville Prestige?
Robert-Jan Broer
17
Hands-on: Tudor Black Bay 36 – Like a Comfy Pair of Jeans
Michael Stockton
13
Seiko Tuna For The Rest of Us
Gerard Nijenbrinks
13