If there is any watch that resembles the famous early original Omega Speedmaster CK2915 then it is the Rodania Geometer. Or is it vice versa? This week, we shine a light on a long-standing but unanswered question: which of these watches influenced the look of the other? Some collectors say Rodania Geometer dates to 1954, which is three years before the original Speedmaster. But does anyone know for sure…?

In September 2018, a Rodania Geometer sold at Sotheby’s for £4,750 (hammer price). Just a few months later, Miller & Miller Auctions (in Canada) offered another Rodania Geometer with its box. It had an estimate ranging from $1,500–2,000. The final price — including the buyer’s premium — was €16,700. That’s a pretty astronomic price considering the fact that most collectors would have a problem to recollect and properly name five other models from the Rodania brand… 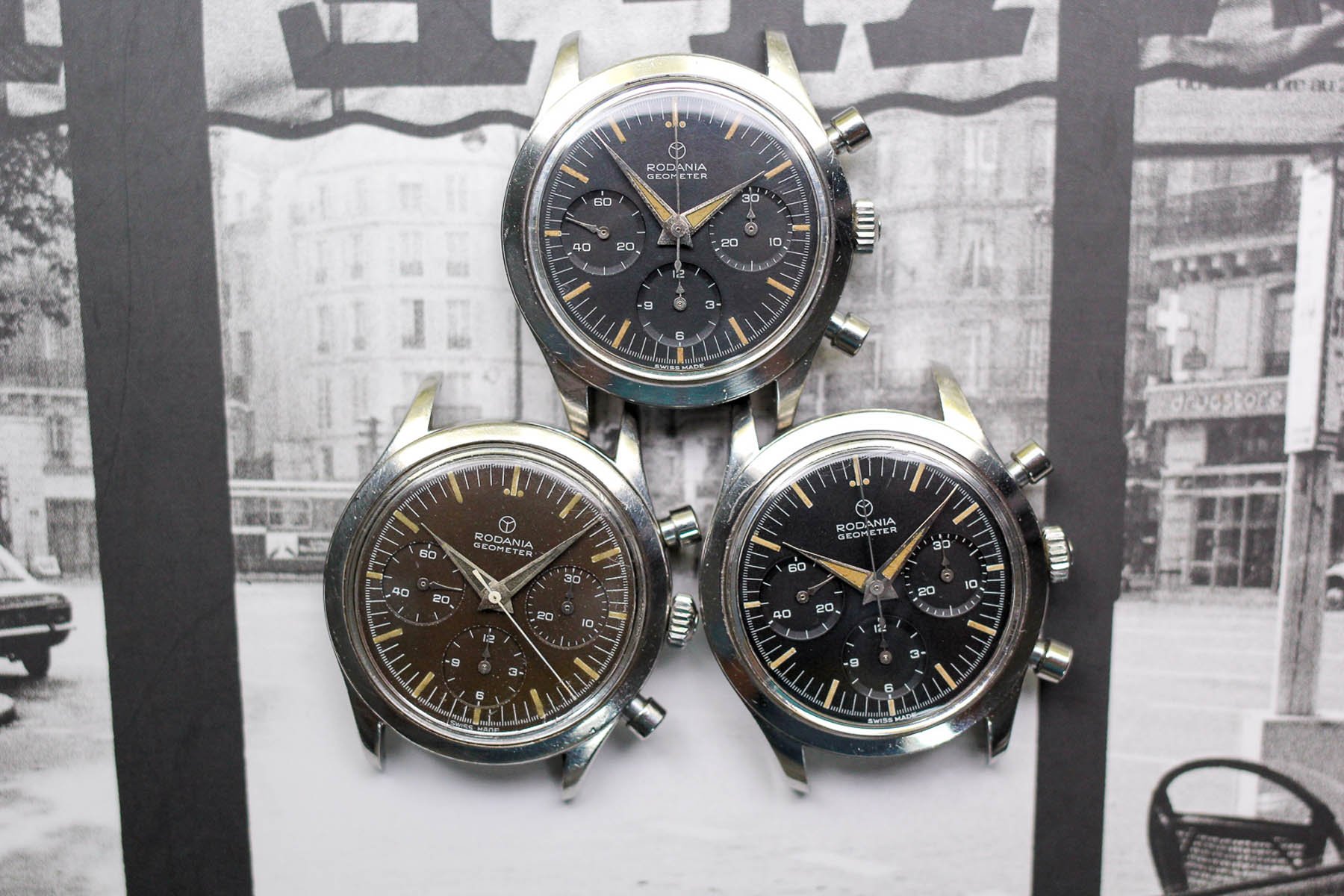 You should follow Rob (@Bazamu) and pay particular attention to his posts where he plants Rodania Geometer into a shot featuring an extraordinary selection of his Speedmasters. Sorry, I shouldn’t say he plants it in there. Because Rob actually proudly features it in a first position. Among such company, the Rodania Geometer looks either like an outlaw or like the alpha male of the wolf pack — the first and brightest star on the night sky. 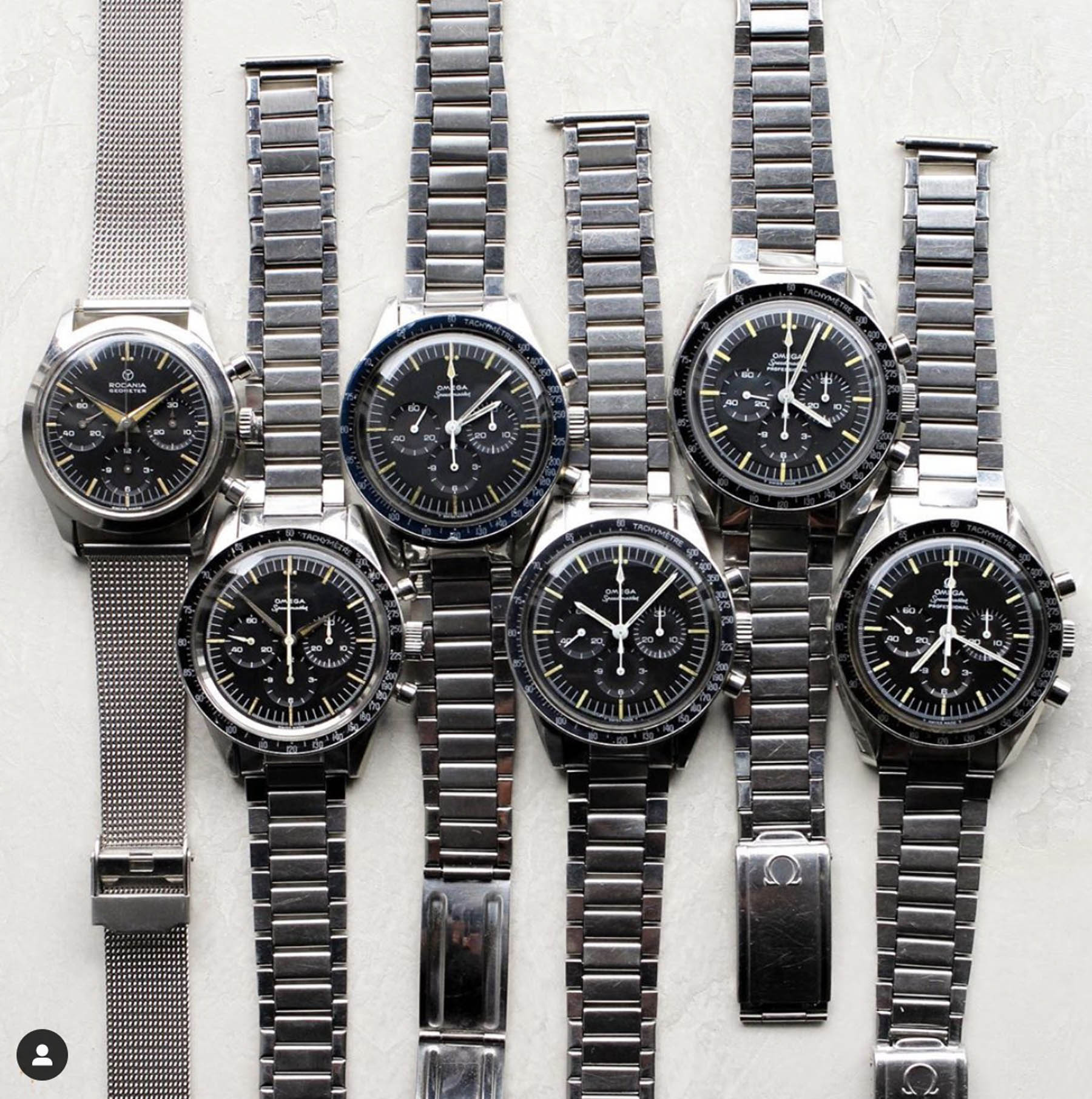 “Dibs list for one of my Geometers is the longest of any watch in my collection,“ confirms Rob without blinking an eye. He thinks that the latter auction result mentioned above is pretty close to the realistic market value of a fine Rodania Geometer example. Rob had three of them. Each beautifully aged, albeit in a slightly different fashion.

This Rodania Geometer odyssey continued last summer, again at Sotheby’s. This time with even rarer white dialed version of already quite rare Geometer. The hammer price reached over €15,000 again. It was paid by a Belgian collector that has strong associations with the Rodania brand. This is a perfect time to pause and reflect on the fact the first big auction took place in Canada while the second big spender hailed from Belgian. 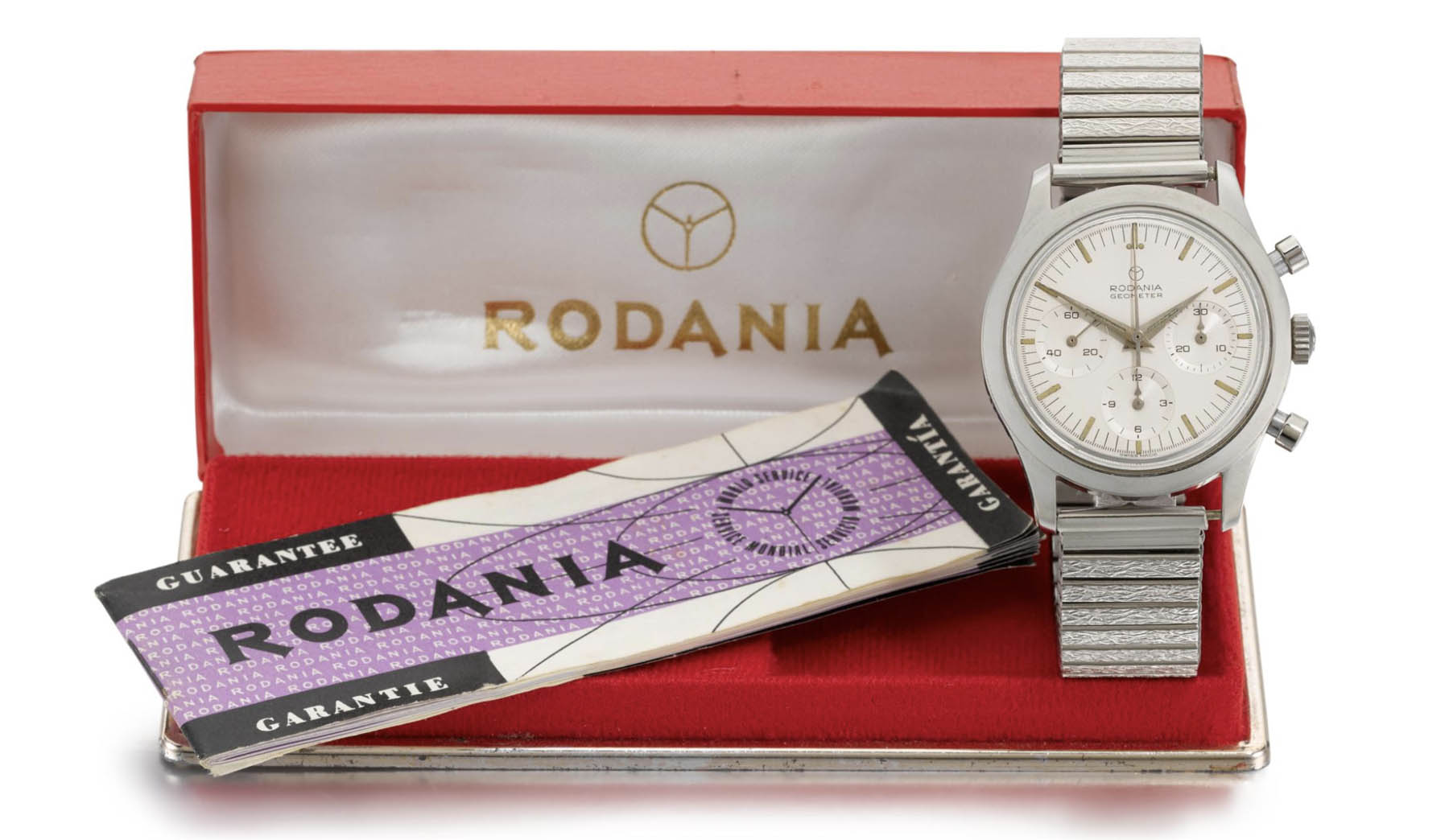 According to this source, “The Rodania brand was created in Grenchen in 1930, in the heart of the Swiss watch industry. Grenchen remained the epicenter of the Rodania activities for decades to come. In order to promote its export activities, two new distribution centers were established in the early fifties: one in Montreal and one in Brussels.“ Fast forward two decades. In the 1950s, Brussels becomes the core base responsible for running the worldwide distribution. During that decade, Rodania tied its promotional activities to sports, but that’s another great story we will share with you on #TBT soon.

A quick look under the case back

If you explore the numerous Rodania offerings, you’re likely to find some pretty decent divers‘ watches alongside some well-equipped chronographs. The Rodania Geometer, powered by the legendary Valjoux 72 is a stalwart in the collection. Actually, if you scrutinize the Rodania Val 72 movement shots, you will notice it says “Adjusted Three Positions“. The adjusted column wheel movement in the early 1960s was anything but standard. Normally, it was the preserve of renowned watch manufacturers. Seeing it pop up speaks volumes of the brand’s prestige. 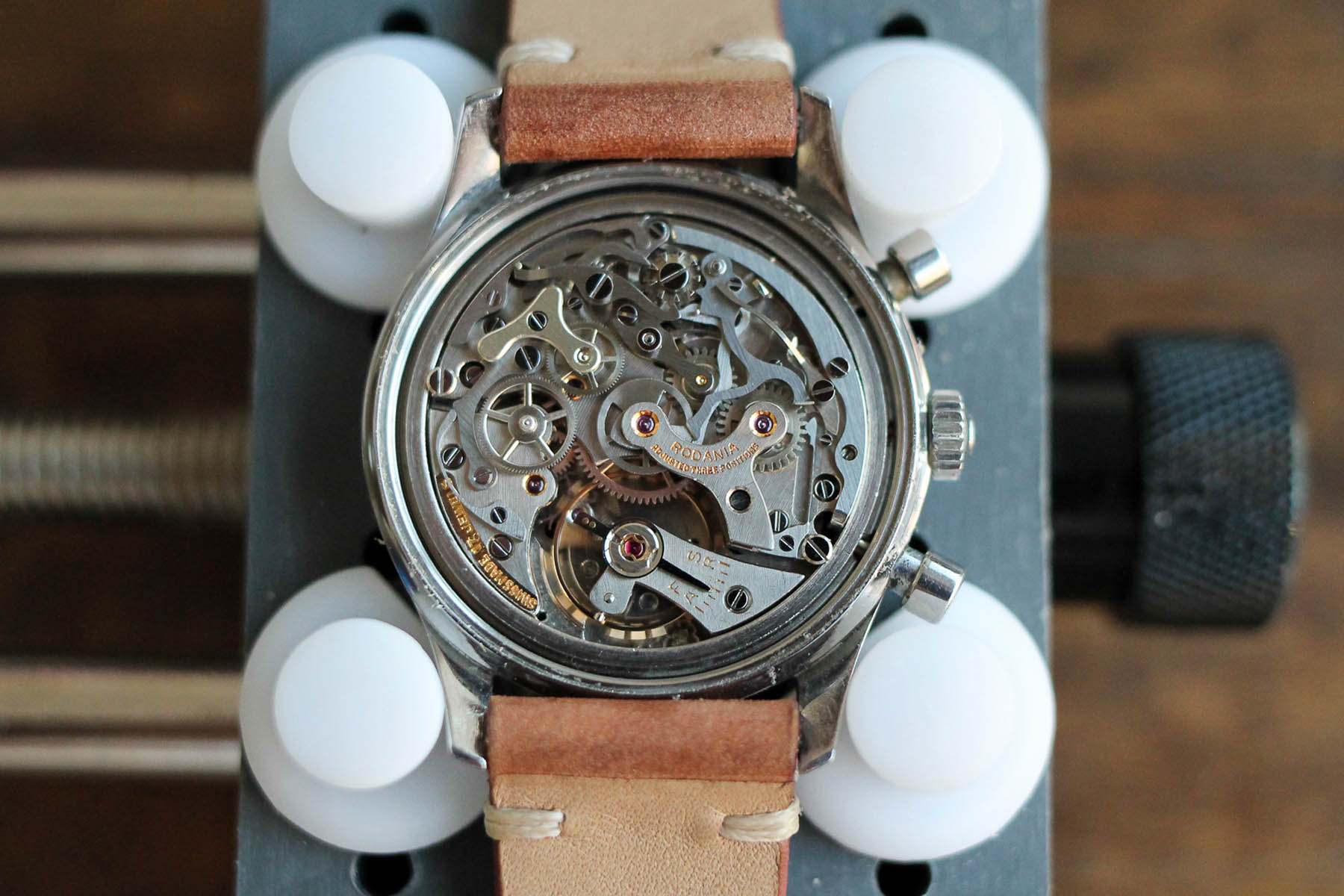 Back to the Omega story

If you compare both Omega Speedmaster and Rodania Geometer designs, they are almost identical. They also both feature a 38mm case diameter. Comparing the details, especially the dial, minute track, indexes, and the sub-registers, we can see that they are stunningly close to each other. But there are differences too. The black-dialed Rodania Geometer comes with quite broad dauphin hands that can develop a really charming patina. As a big fan of small arrow hands, I am overjoyed to see them in sub-registers.

Over the last few years, Rob has been trying to find solid proof that would end the debate regarding the precise Geometer origins once and for all. He tried to contact Rodania multiple times but has had no luck so far. There are quite a few arguments supporting the 1950s production date, such as concentrated radium used for lume. Levels on Geiger counter Rob made showed similar values to the readings seen in other watches from the 1950s. 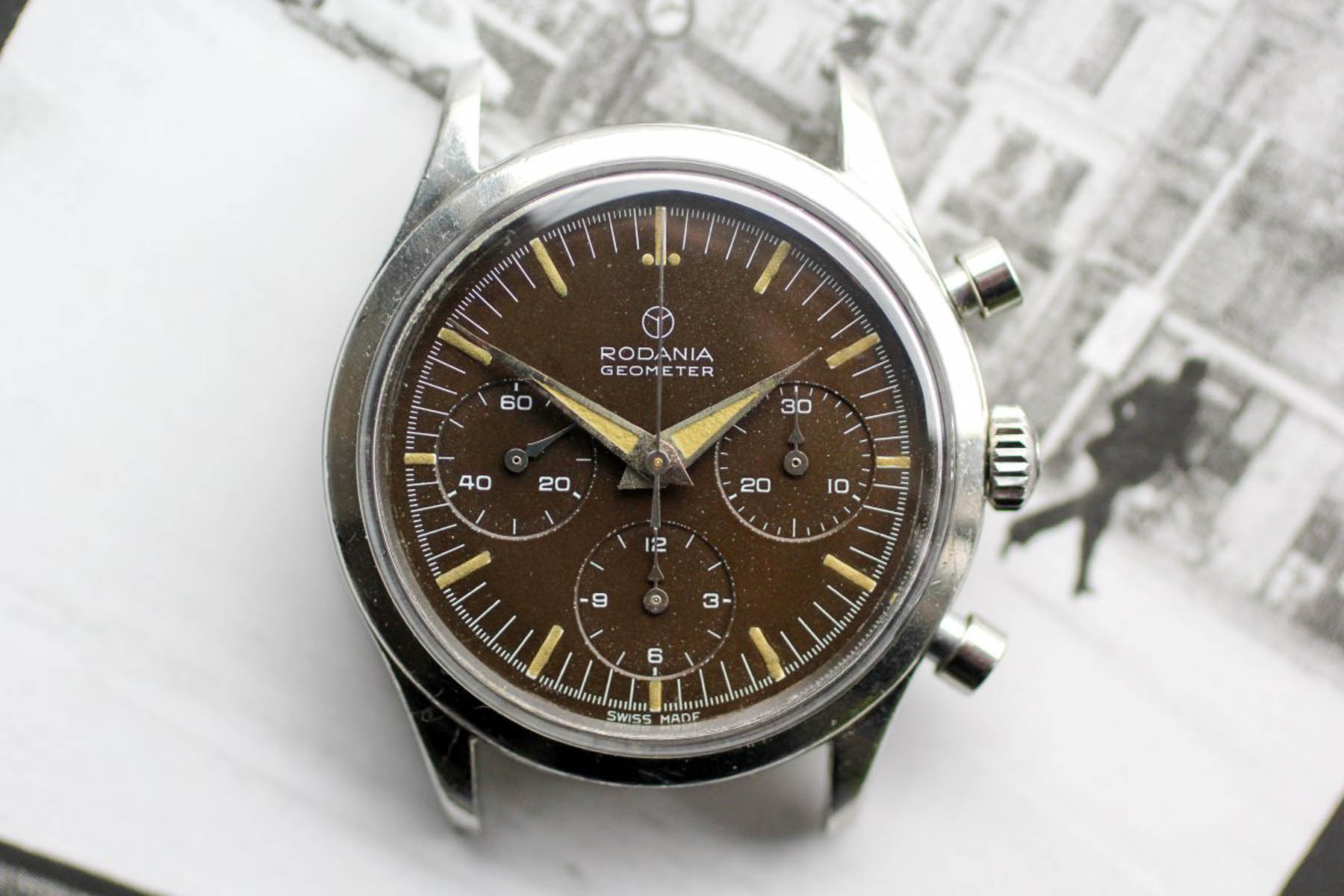 The different bezel design also doesn’t really prove anything one way or the other. The tachymeter scale was undoubtedly made more popular by the Speedmaster, but its presence on the 1957 release and its absence on the Rodania Geometer doesn’t mean squat.

Also not solid enough is the claim that the shape of the sub-dial hands is similar to a few other chronographs of the era. Rob concludes that “while there are some definitive signs that it dates to the mid-’50s, the exact production date of 1954 remains anecdotal.“ Rob and other Geometer friends keep digging.

The point of this article was not to decide which story explaining the design similarities between Omega Speedmaster and Rodania Geometer is true. We just wanted to bring Geometer to your attention due to the recognition it received at recent auctions. As we also wanted to tell you more about Rodania, another decent watch brand we never featured on #TBT before. If you have or discover any additional information and verify it, you are certainly welcome to contribute it to their findings.