A flashing light and an unusual movement? That’s a must-have watch for me. Imagine, back in the day these models had a price tag higher than the finest mechanical Citizen pieces back of the 1970s. Still, not many collectors know of them today. But what fun they are to play with. Meet the Citizen Crystron Quartz 8600.

I guess that younger collectors might really struggle to understand what this weirdo movement was for in the life of common people. There is a pretty decent red light that flashes every 60 seconds on Citizen Crystron. It blinks for a short moment every time the second-hand passes by the 12. No need to be a Harward graduate to understand it signals the minutes and thus blinks 60 times per hour. Nothing overwhelming. 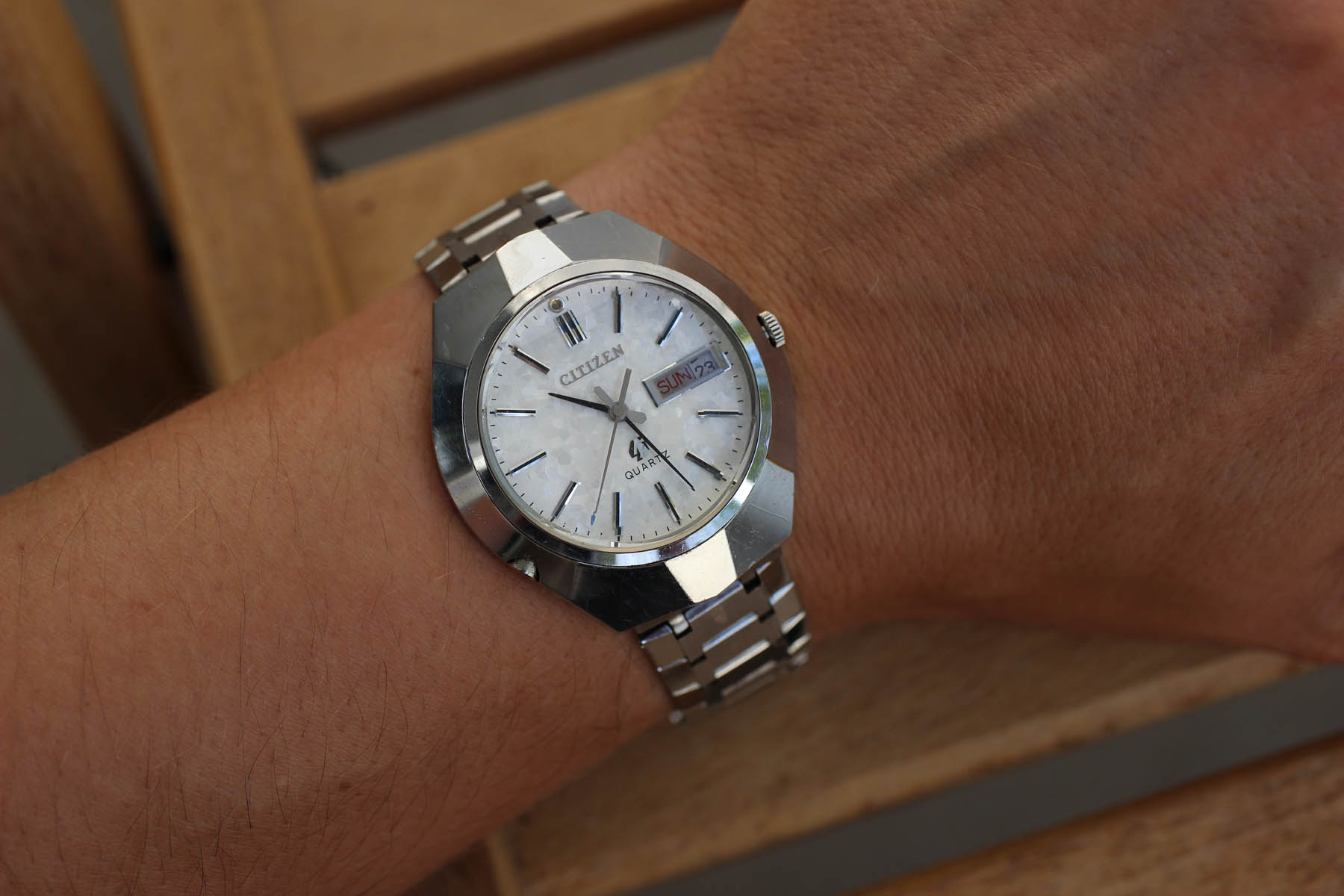 The riddle starts when you press the pusher at 8 o’clock that is sunk so deeply into the case, that it nicely shapes the sideline edge. If you press it anytime between the 0-29 seconds position, the second-hand stops for the length of the seconds position it shows. So if you press the pusher when the second-hand shows 17 seconds, it stops for 17 seconds. That’s when the indicator comes alive again as it flashes for every “frozen“ second. What might that feature be for?

There isn’t much written about this Citizen Crystron. But the little you can find can be entertaining. I had so much fun reading forum threads in which collectors discuss (or guess) what the mysterious “blinking“ red light or the crazily stopping second hand might be for. I got it immediately and I‘ll tell you why. 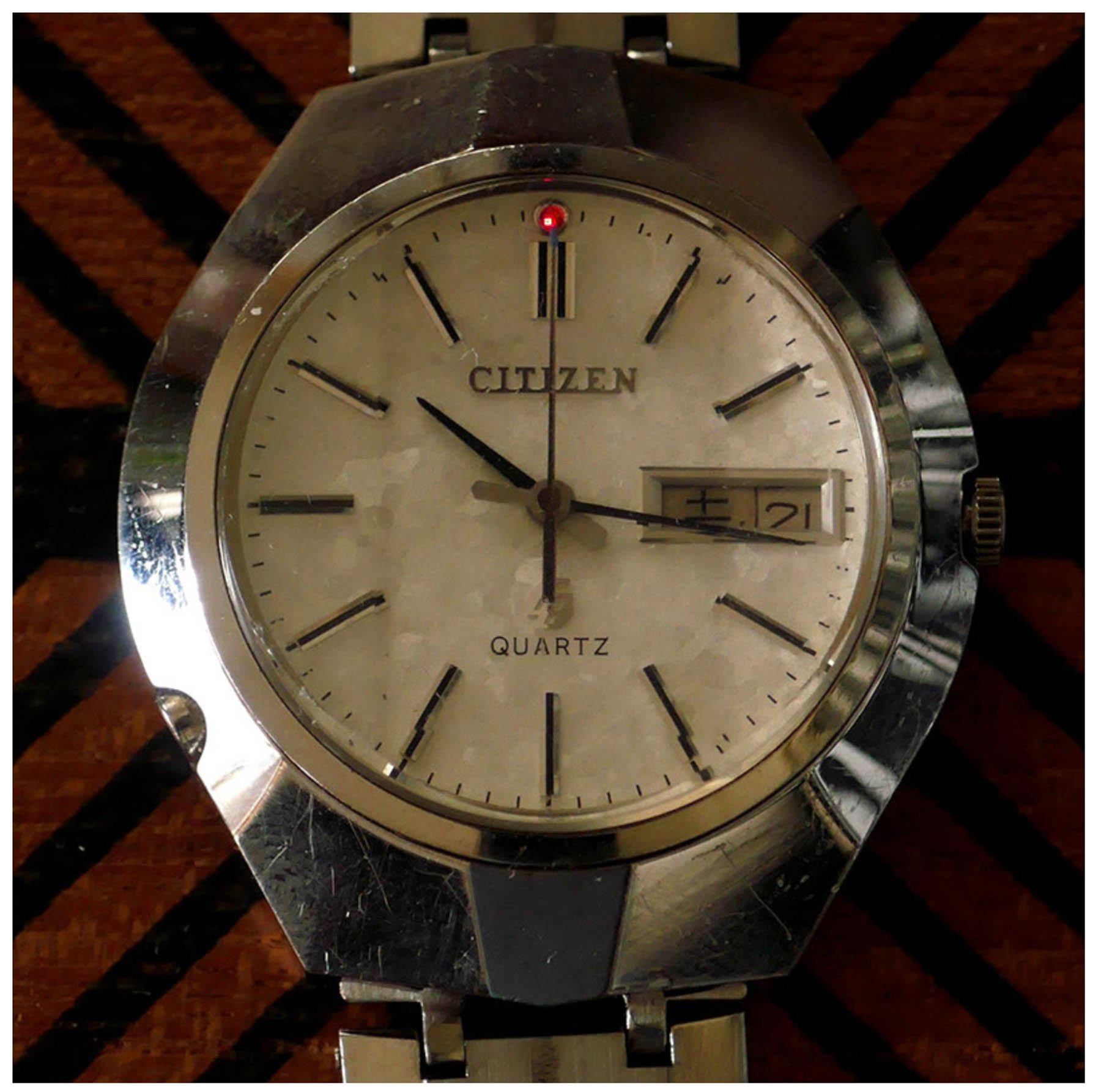 When I was a kid, the radio was playing all the time in our kitchen. Every half hour and on the hour, the broadcasting went silent. In full silence, you could only hear loud beep-beep-beep-beep-beeeeeeep tones. The last beep was always higher and longer than the four previous ones. It was followed by a female voice whose tone is deeply burnt into my memory saying: “The time signal just announced 10 o’clock.“ 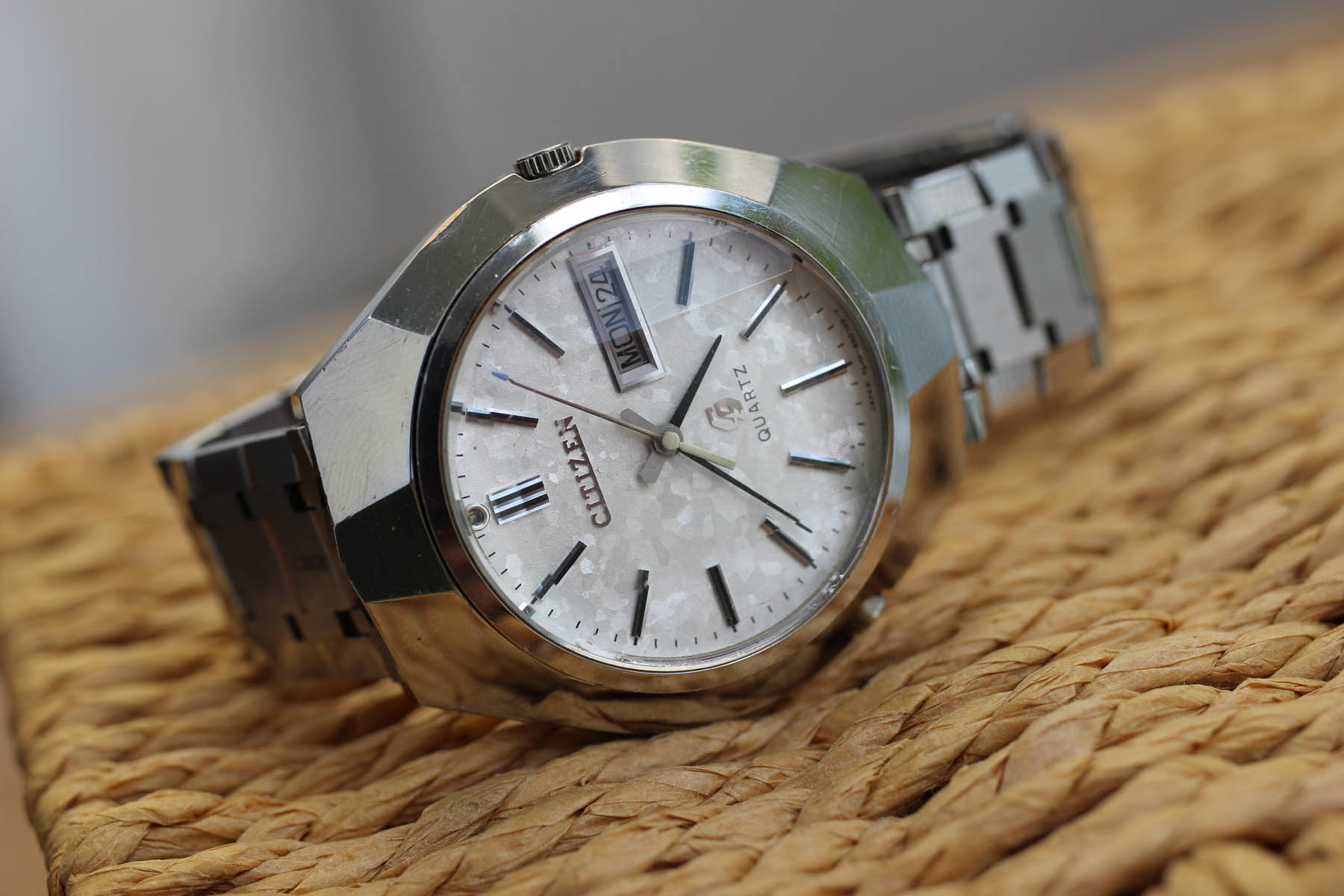 And that’s what the Citizen Crystron Quartz 8600 was built for. If you heard the exact time signal from an external source, let’s say radio in this case, you pressed the synchronizing pusher with the last loud beep. If your watch was 17 seconds ahead, you didn‘t have to hack it in the usual manner. Thanks to a single press of the button the watch waited until the hands aligned with the real-time and you could happily continue doing whatever you were up to.

There was more to it

The core of the so-called zero-second reset system was an electronic counter built into the circuit that memorized the second-hand position on the dial at all times. Interestingly enough, if you press the crown anytime the second-hand passes the 30 seconds position the system works differently than previously described. Instead of the “blinking wait mode“, it switches into a „quick advance mode“.

Press the synchronizing pusher when the second-hand shows 50 seconds and the second-hand starts running forward to catch the zero in the blink of an eye. „The driver circuit produces 32Hz pulses, which turns the rotor 32 times as quickly as ordinary speed. After exactly one second from the push of the reset button, new and correct pulses are produced and thus the second hand will coincide with the standard time,“ says the 86xx movement description I found in a clipping of what seems to be a journal dated back to July 1977.

Speaking about the date, my example is dated to April 1974. Notice the applied CQ logo and especially the QUARTZ sign below it. Most of the Citizen Crystron 8600 “Blinkers“ have the CRYSTRON sign on the dial, only the early examples come with the Quartz sign. According to Stephen’s website — a valuable source of information about vintage Citizen watches — “since from around October 1974 they were marked ‘Crystron’. 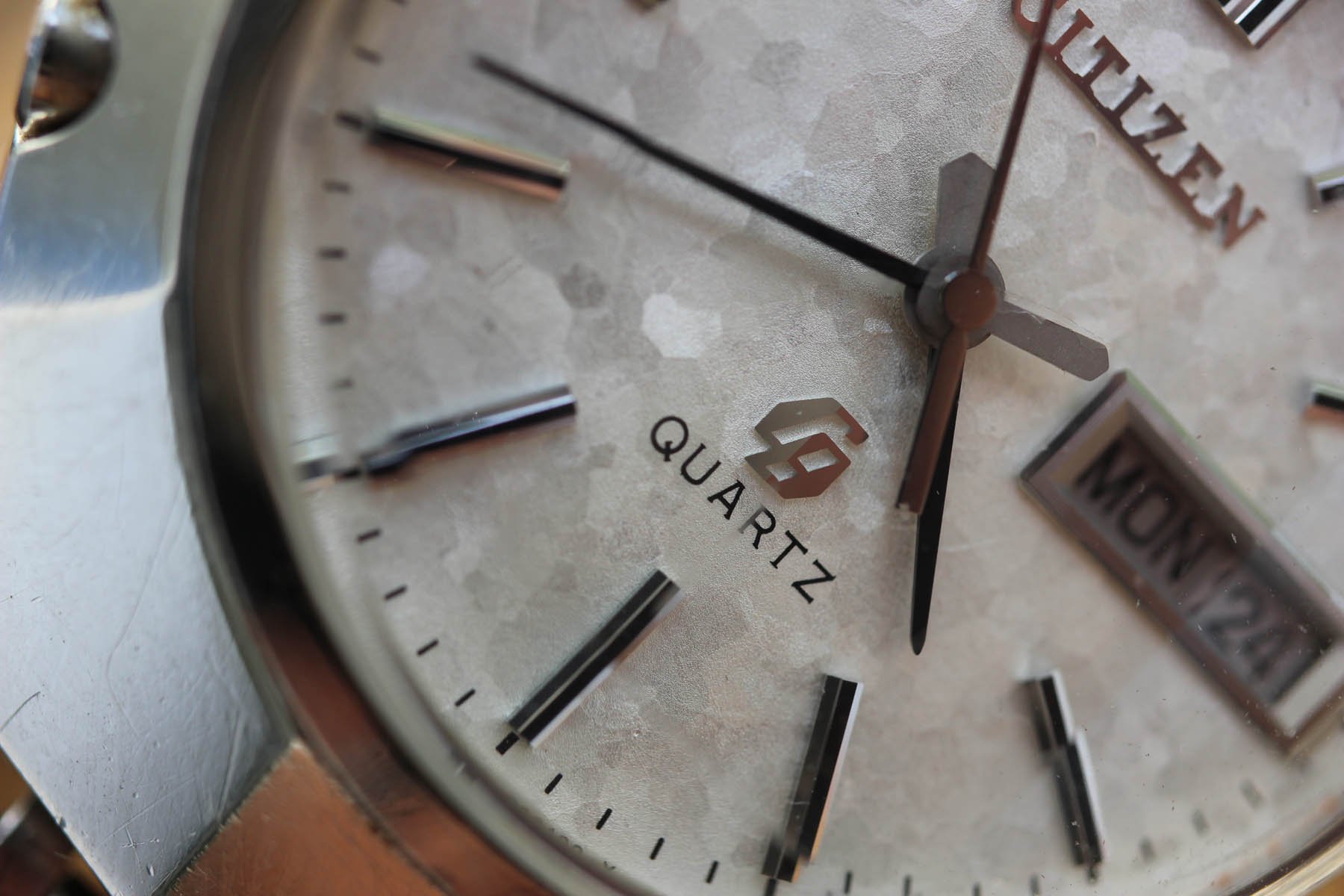 There are a lot of different “Blinker“ model designs available with an astonishing variety of case styles. My favorite is not the one featured here, but rather a classier version I found on Stephen’s website. You can put two and two together now and my advice would be as follows: don’t hesitate much when the opportunity comes, as it doesn’t come that often. I was searching for the “Blinker“ for quite some time and passed on a few suspicious pieces that actually might have turned out to be very nice examples.

I honestly don’t know where exactly to put my “Blinker” on the Citizen Crystron timeline. It’s definitely one of the early pieces, given the bulky helmet-style case. It looks pretty oval, but the polished surface is sharply cut. Lugs cemented in the steel mass make my “Blinker“ look much more unwieldy than it actually is. With a diameter around 37mm, it‘s just about right for me. The 13mm thickness is notable, but still on the right side of the line. It is both bearable and wearable. 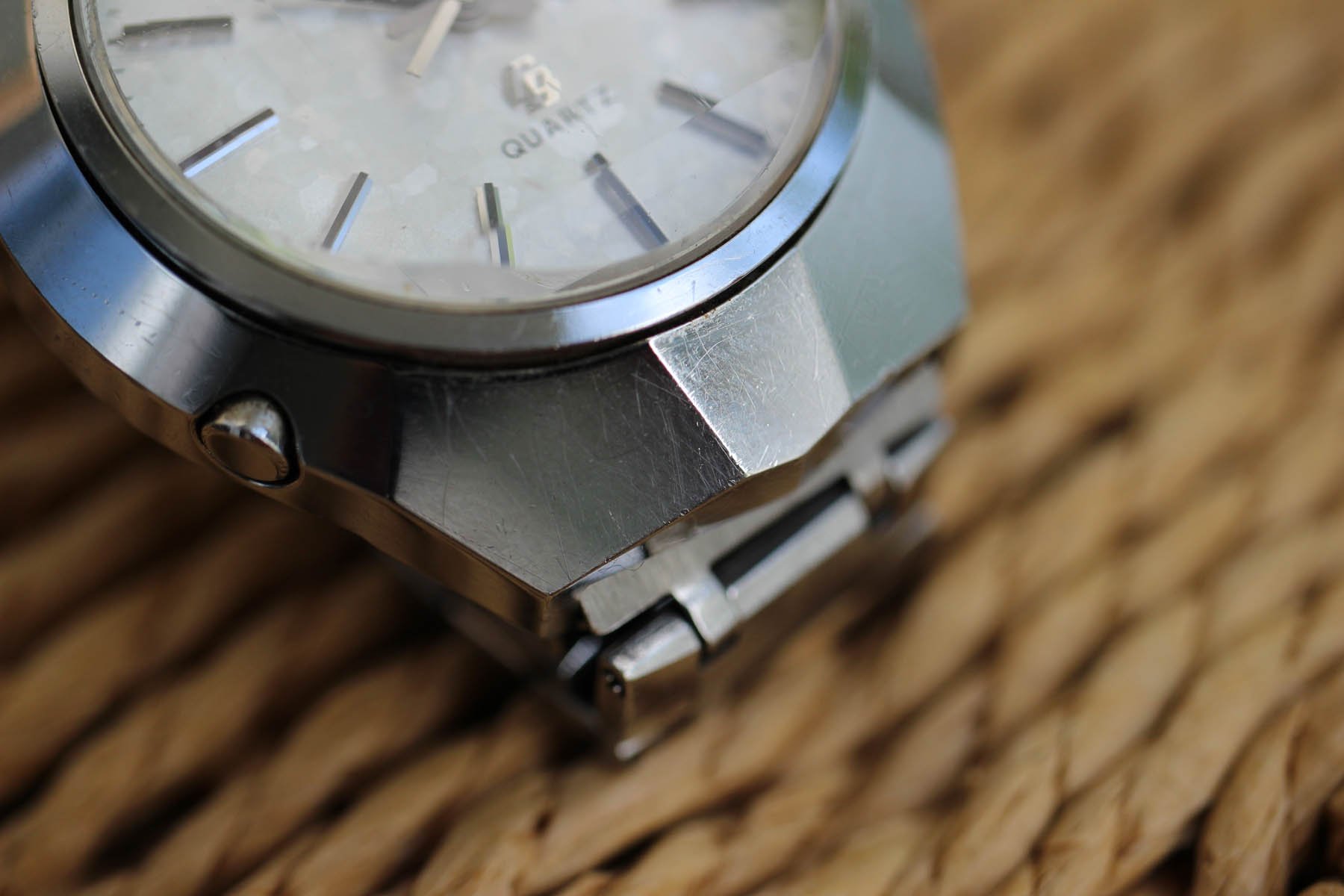 The crystal and the dial

Both are spectacular and epic. If divine sounds too much to you, you cannot unsee the extraterrestrial origins in it. Crystal structures are a serious inspiration in this case. The top crystal was flat until some ninja took his machete and cut the edge in sloping a diamond-like shape.

Wearing the Citizen Crystron Quartz 8600 feels like being featured in a 1970s movie. The watch is so specific in its design, with major elements such as the case and crystal carrying a distinct, but unifying design idea. The movement that represented the top-notch league fifty years ago is not so sought after today. Because nobody cares, I guess. For me, the Crystron Quartz 8600 encapsulates the spirit of Japanese creativity and tech progress. And, after all, let’s not forget that it blinks! Happy hunting.