For all the stories we write about Seiko here at Fratello Watches, we spend that exact opposite amount of time talking about Citizen. There are some reasons for that: namely, they’re a tough company to track down and they almost solely focus on non-mechanical watches these days (despite owning Miyota, one of the largest suppliers of mechanical movements). On the vintage side, we’re guilty of having never featured a watch from the brand. There are reasons for that which I’ll detail in the next paragraph, but we’ve held off long enough. Today, ladies and gents, we kick off our coverage of the other brand from Tokyo and take a look at the Citizen 51-2273 diver. 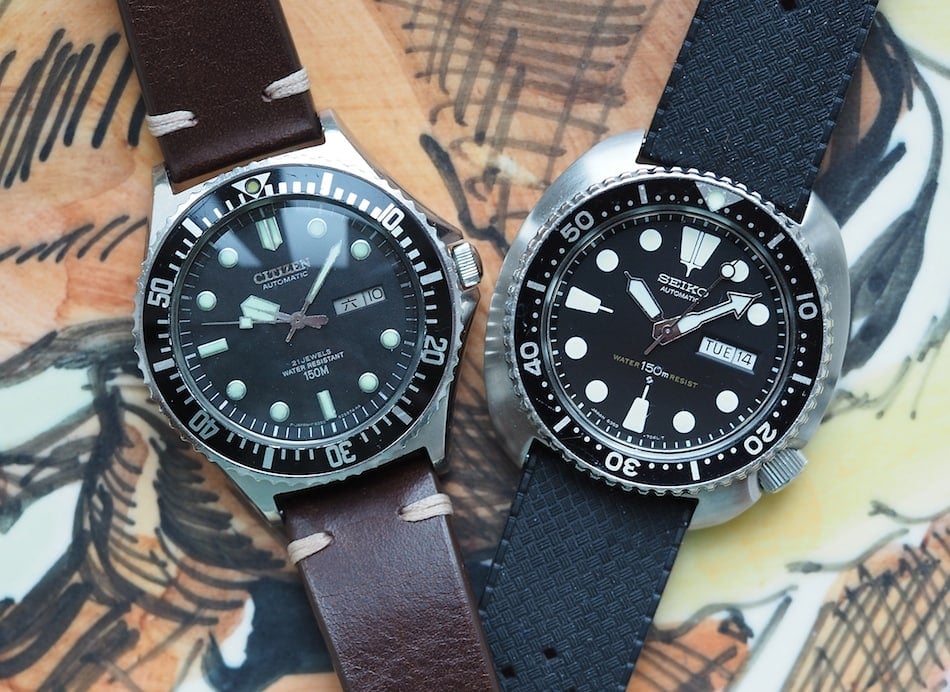 Before we get into the details of the Citizen 51-2273 diver, let’s spend a moment to discuss our coverage of Citizens both new and old. On the new front, and perhaps I’m missing something, Citizen doesn’t do a lot of outreach. Whereas we hear a lot from Seiko, we hear little from the other analog Japanese brand. This odd approach to promotion extends to the brand’s Baselworld exhibition area. There are no conference rooms and there’s no ability to go 1:1 with the watches – believe me, we tried. It’s odd and even more so as the company owns outward reaching divisions you might know such as Bulova, Arnold & Son, Frederique Constant, and the movement company La Joux-Perret. Also, as stated, Citizen puts the bulk of its focus on Eco-Quartz movements versus mechanical. In fact, the somewhat legendary NY0040 diver is one of the few mechanical mainstream products on offer. However, we’d still like to cover more of the wild and crazy multi-function watches released by the company each year. If Seiko can change, I guess there’s hope for Citizen too. 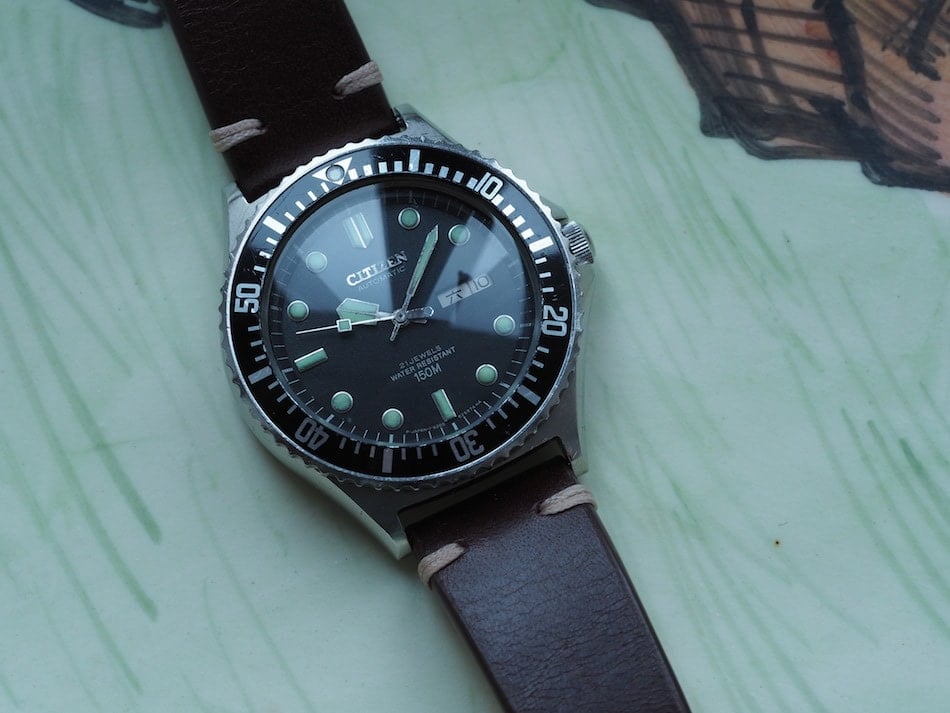 On the subject of vintage, it’s fairly simple as to why we’ve lacked coverage. Information on old Citizens is tough to come by – especially in English. For a brand that many of us have associated as being available globally for quite some time, information seems to be largely in Japanese. And folks, I possess skills (most are trivial – just ask my wife), but I cannot read Japanese. It amazes me, again versus Seiko, how there’s a real dearth of well-founded data and information out there on the brand’s historic models. That’s not because people haven’t tried (a great site exists here and I’ll mention a second later on), but there’s little that pops up on forums and little in the way of documentation out there that I’ve seen. And that stinks because Citizen made some pretty damn cool watches back in the day. Perhaps they were primarily, or all, meant for JDM consumption and that’s the reason. Anyhow, it makes researching a watch difficult: and believe it or not, I do study up prior to pontificating. But enough is enough, we’re going to take a look at the Citizen 51-2273 diver because it’s just too good to ignore. 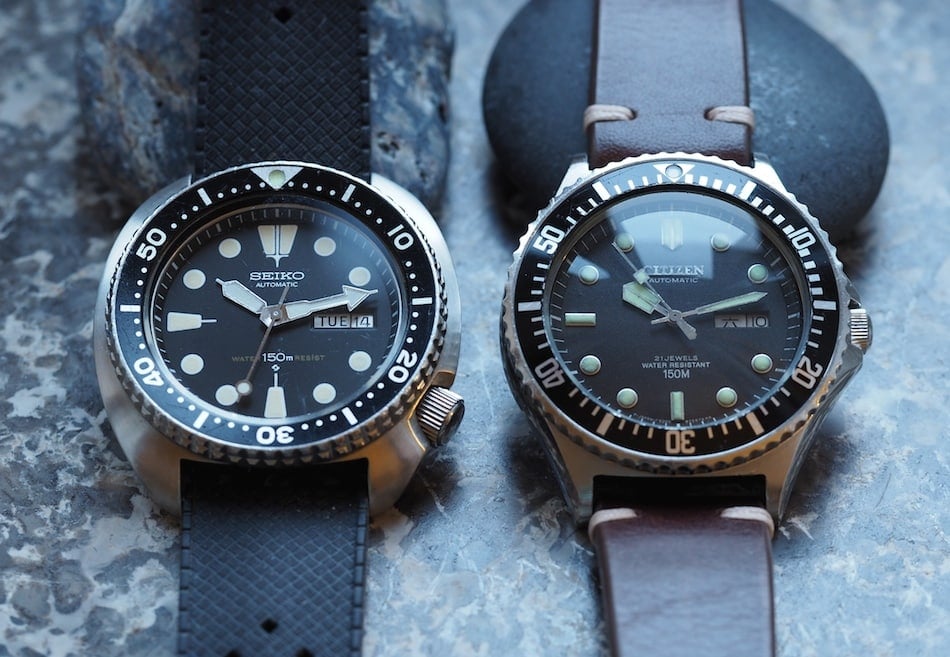 One thing worth mentioning is that if there’s a vintage Seiko model you love and enjoy, there’s a really good chance that corollary exists from Citizen. Citizen had an answer for Grand Seiko, the Bellmatic, the early automatic chronographs and so many other models. In fact, I’m not sure if Citizen’s releases were always an answer or if they actually “asked the question” first. Whatever the case, today’s Citizen 51-2273 diver is a really good example of the rivalry between the companies because the watch existed during the production run of Seiko’s well-known 6309 “Turtle” (the latter half of the 70’s into the 80’s). Sure, the two are quite different in terms of design, but spec-wise, they’re closely matched. The 51-2273 is also similar to the Seiko because, in a way, it represents the last in a long line of semi-professional automatic divers (head here to see some lineage). Sure, both brands made automatic divers afterwards, but they were often designed in a more budget friendly manner and quartz versions became far more prevalent. 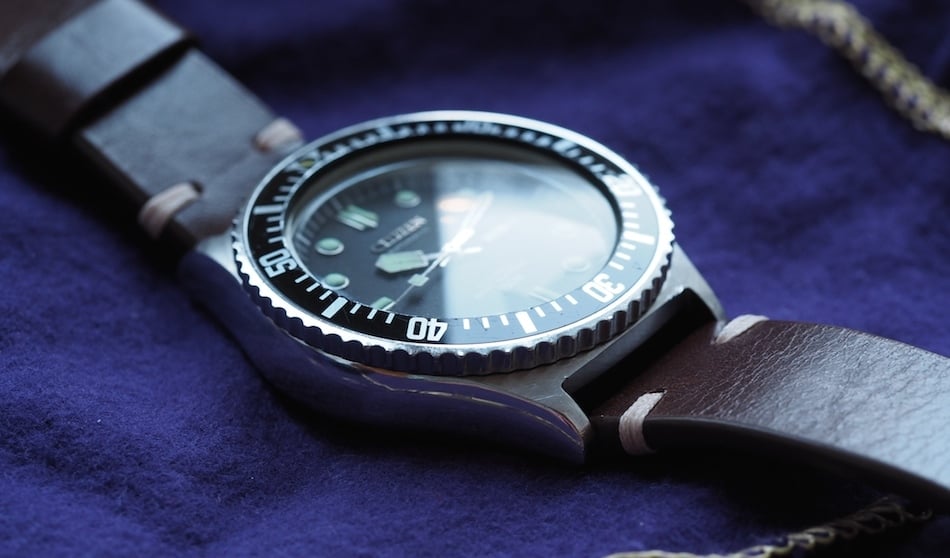 From a distance, the Citizen 51-2273 diver may look like your typical somewhat Rolex-esque watch that’s ready to brave the undersea. Upon closer inspection, though, you’re met with a case that’s quietly unique. I say quietly because, unlike the Seiko’s, the case isn’t really the focal point of the watch. With its thin, short lugs and sides that are hidden beneath the bezel, it nearly goes unseen. Still, with subtly sized crown guards and a small screw-down crown, it’s sturdily designed in a manner that’s a step above utilitarian. 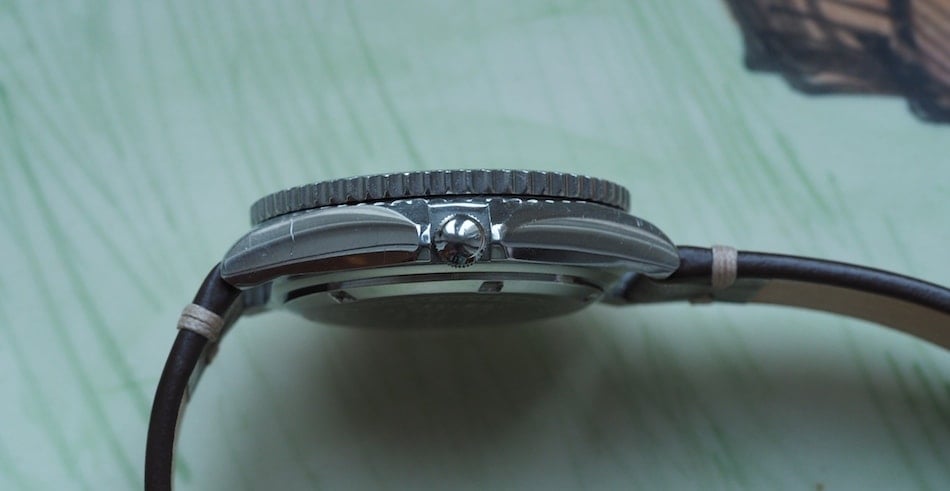 The bezel is where some boldness comes into play. It receives hash marks all the way around but features thicker marks for the first 15 minutes. The bezel is unidirectional and is a well-weighted 60-click version. From the side, it’s pretty simple with vertical knurling, but the finishing is smooth. 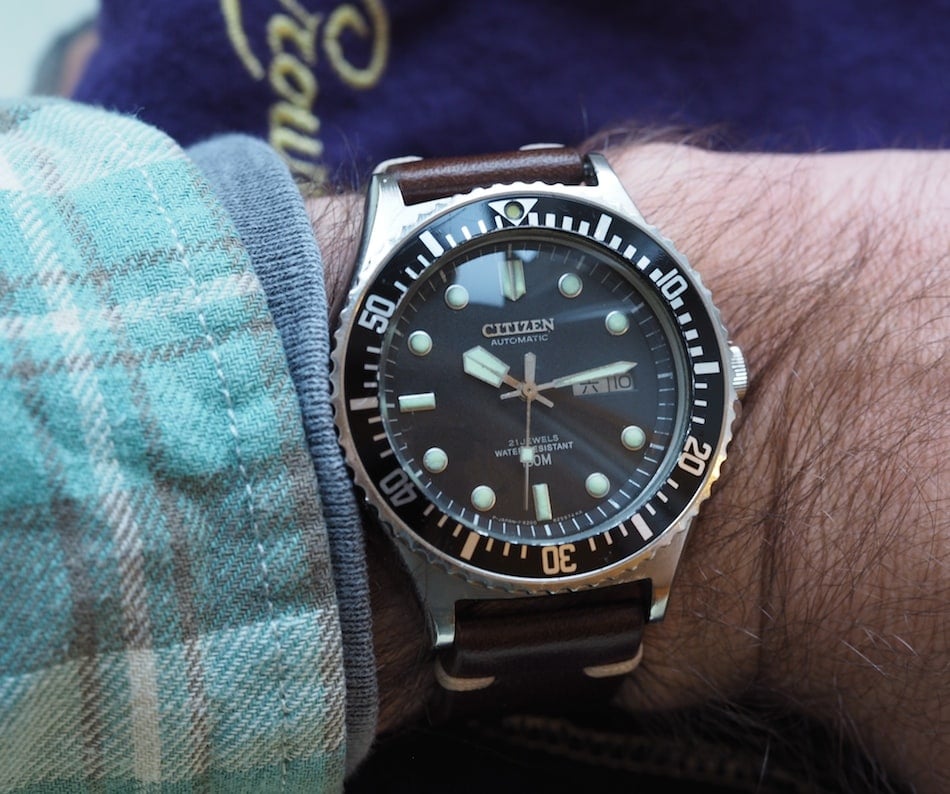 I really enjoy my Seiko 6309 and it’s generally a pleasure to wear, but it’s a heavy watch that can feel a bit large on my wrist. At roughly 44mm, it’s on the large side, but benefits from a nearly lugless design. The Citizen 51-2273 diver, on the other hand, comes in at a smaller 40mm (the bezel overhangs and makes it seem larger) and is a bit lighter. The lug design also drapes down sufficiently to hug the wrist. Another comfortable difference is the 20mm lug width on the Citizen compared to 22mm on the Seiko. It’s not a huge discrepancy, but it all adds up to less on the wrist. As for the case back, Citizens are known for sticking with just the facts and this diver doesn’t stray. There’s a lot of writing on here that includes the model number and a 7-digit serial number that allows us to date the watch (just like Seiko) to October of 1983. 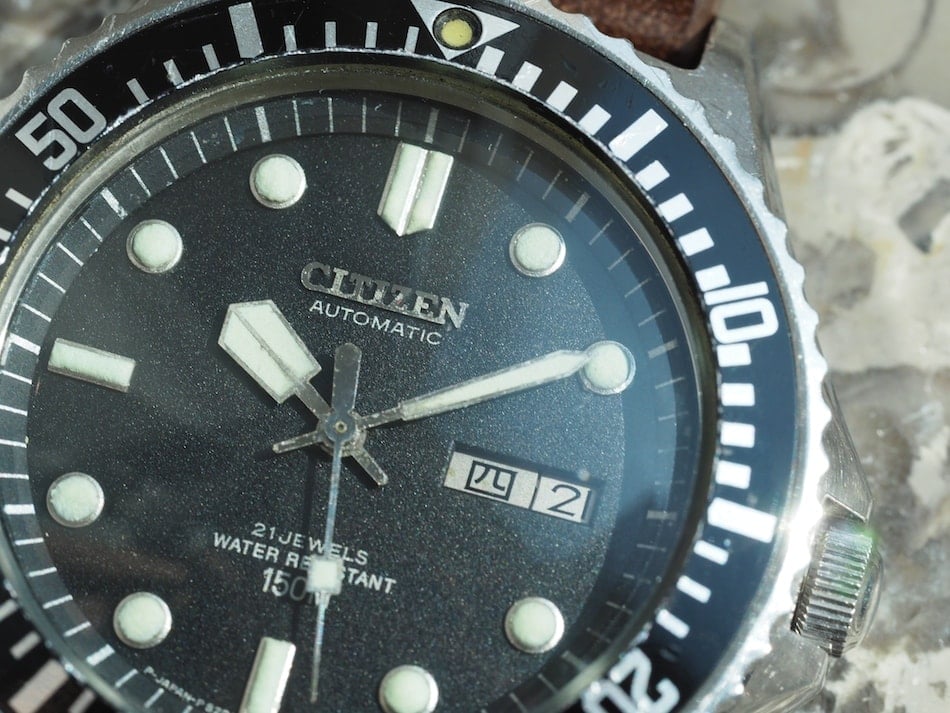 As always, though, the dial and hands are what ultimately sell the watch and with the Citizen 51-2273 diver, I’m a huge fan. Many vintage Citizen divers aped Rolex with the use of Mercedes hands. There’s nothing wrong with that and those watches contained just enough other touches to make them unique, but with this watch, we get some of my favorite hands. I’ve heard them referred to as “spade” shaped, but to me they just look different. They’re lume filled, including a sweep hand with a square pip, and work well with the applied indices that are filled with loads of the glowing stuff. 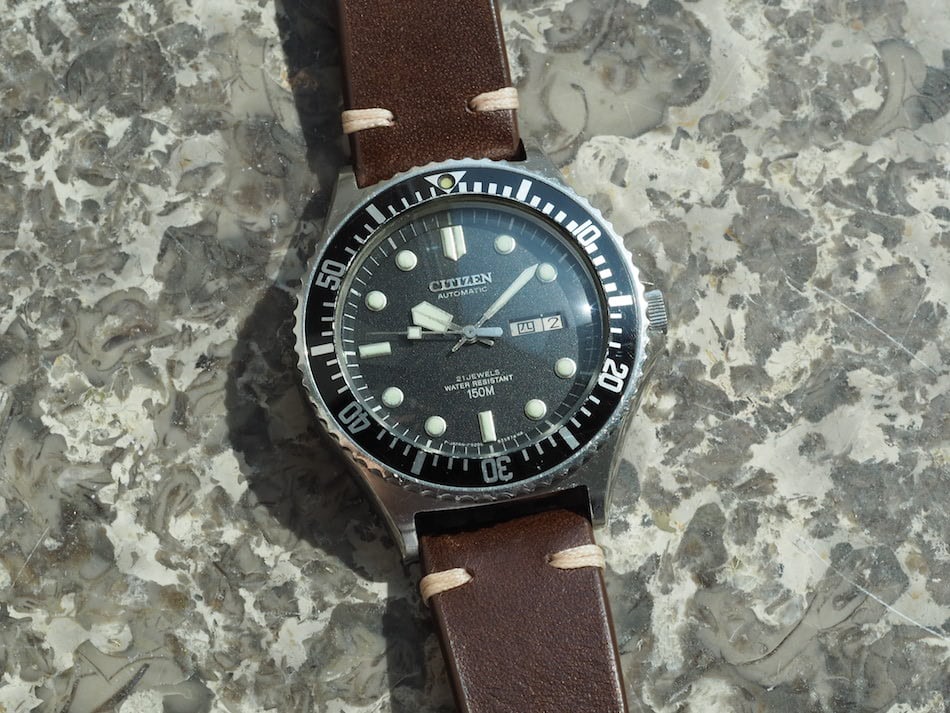 Visible under the mineral glass (making photography a real pain), the matte black dial contains what seems like some small-granulated specs in it, but these are only visible in certain lighting at an angle. An applied Citizen logo and some printed verbiage exist. Of note, the water resistance matches the Seiko at 150 meters. 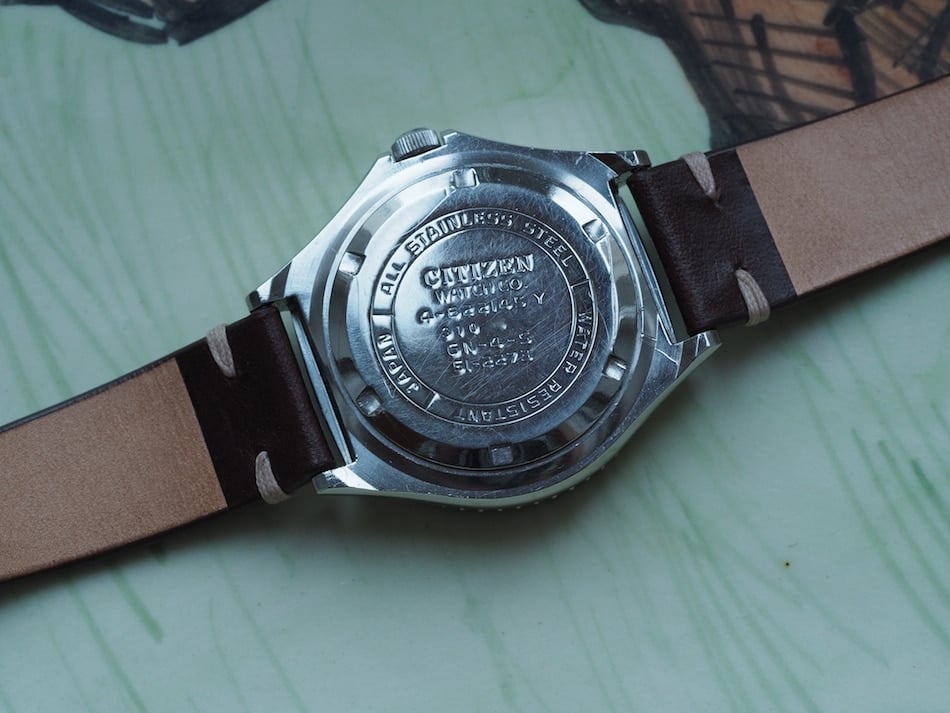 Inside the Citizen 51-2273 diver we can find the Miyota 8200A. It’s a 21-jewel movement that can be handwound and it beats at 21,600 bph and has a power reserve of roughly 45 hours. My experience is that it runs and keeps time very well and I like the hand winding ability. The movement also features day and date functionality. Like a lot of Seiko’s, the Citizen features an alternating Japanese/English date wheel. Everything is quick setting and works smoothly. 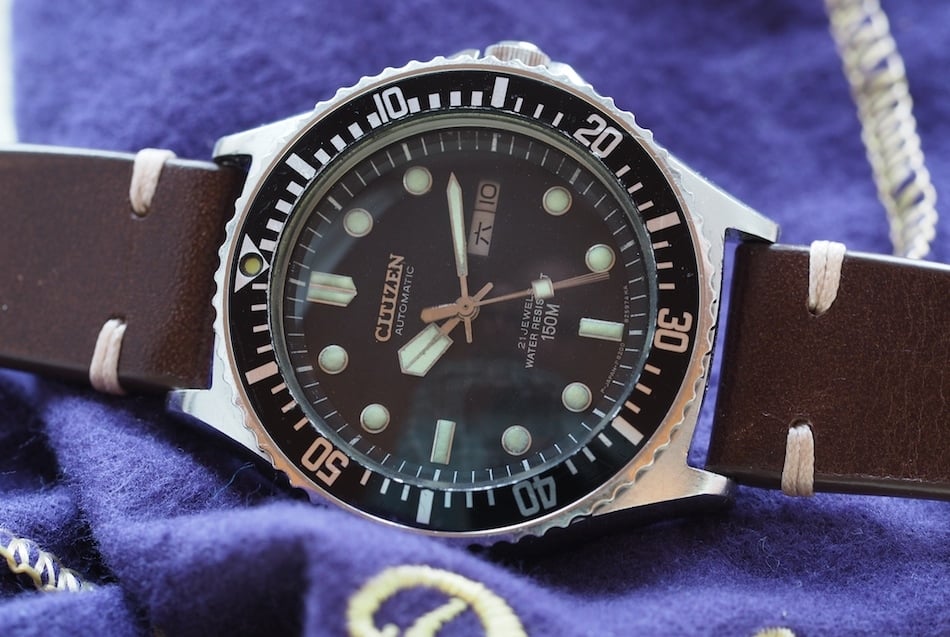 There’s just something about this Citizen 51-2273 diver that I really like. It simply feels like a well-built watch that could be worn daily. It keeps great time, it’s comfortable, and I like the subtle uniqueness it offers. Speaking of the latter point, go try to source one of these and you’ll find about 1 Citizen for every 10 Seiko 6309 you see. And, like the Seiko’s, most of these Citizens have lived a full life and are typically in bad, damaged, or modified condition. Citizen lume often looks green, so don’t let that bother you unless it simply looks too good to be true. 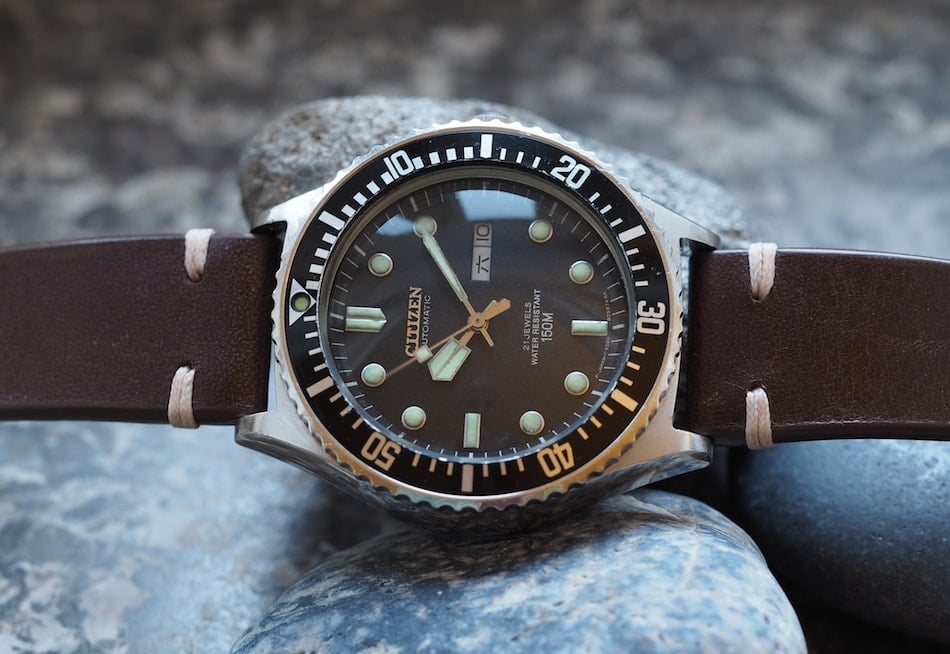 Be on the lookout for watches with incorrect crowns, hands (check all three), nasty date wheels showing signs of water ingress, and those with missing inner tension rings (I’ve seen many). A good 51-2273 is not easy to find – this goes for almost all vintage Citizen sports watches – but it’s worth the wait. Pricing wise, you’ve possibly come all this way hoping to get an oft-overlooked bargain, but it seems that there is a passionate crowd for Citizens. Owing to this diver’s good looks and cult popularity, expect to pay anywhere from $350 – 500 for a decent example. If you’re traveling to Japan, that’s a decent place to look. 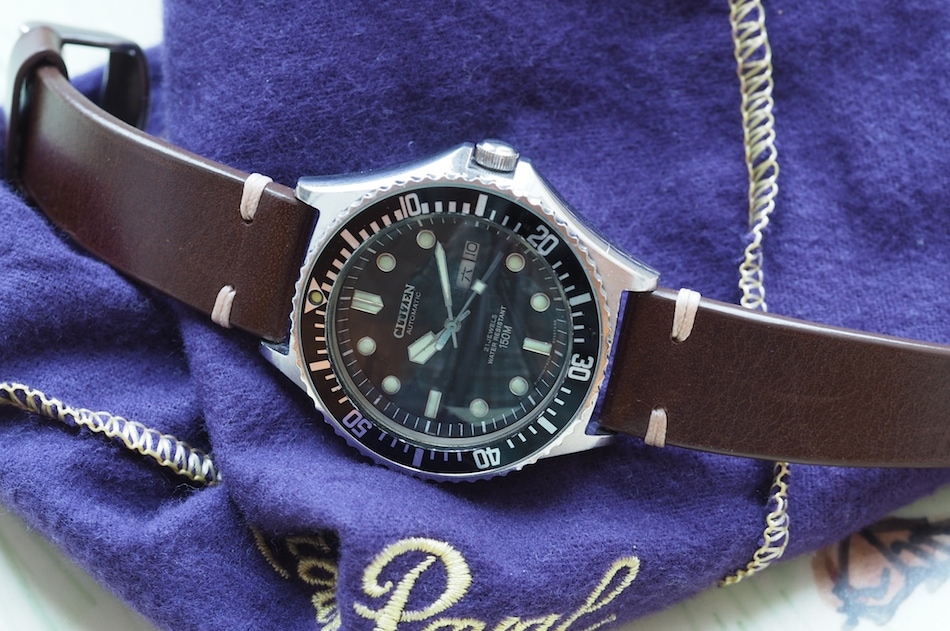 We’ll have more Citizen coming up on #TBT as I’ve added a few over the past several years. It’s been a slow grind because, as mentioned, they’re tough to find and even tougher to research. Here’s to hoping that some Citizen fans come out and show us some of their cool pieces in the comments. For now, take a look online and I think you’ll find that a piece like the Citizen 51-2273 Diver could serve merely as an introduction to a seriously rewarding rabbit hole of cool vintage watches.

Hot Topics
Laventure Automobile Chronograph With A Proprietary Movement — Marking A Huge Leap Forward For One Of The Industry’s Most Promising Brands
146 comments
Fratello Exclusive: An Inside Look At The MoonSwatch Production Facilities
64 comments
Sunday Morning Showdown: GMT Wars Part Deux — Rolex Vs. Grand Seiko
60 comments
Selling Your Watch To A Dealer Or Trading It In — Tips From A Former Watch Dealer
49 comments
The Top 10 GMT Watches Right Now — From Ball, Grand Seiko, Tudor, And More
44 comments
Popular
Top 10 Rolex Watches – Overview of Models Favoured By Our Readers
Fratello
22
(From The Archives) Shut Up & Read The Truth About Cartier Watches
George Cramer
21
You Asked Us: Tissot Powermatic 80 Seastar 1000 or Longines HydroConquest
Robert-Jan Broer
16