TAG Heuer re-released the original Carrera in the 1990s

TAG Heuer’s chronographs enjoyed greater success in the mid 1990s than ever before, but there was a growing demand for historical flair. The result was a high-fidelity replica of the Carrera from 1964. 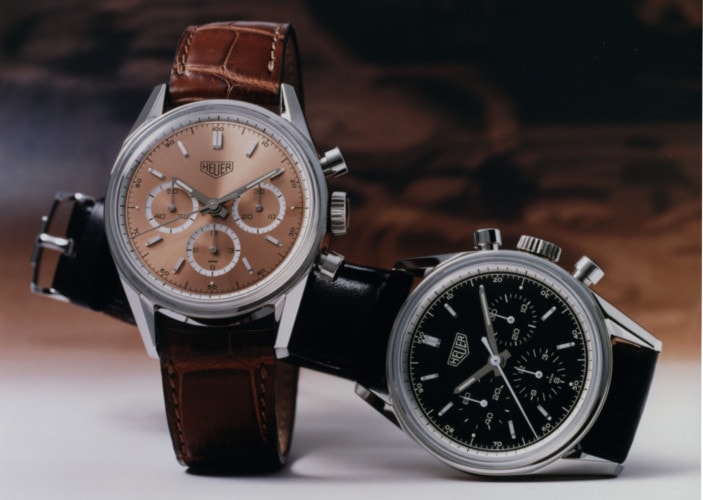 After an eleven-year hiatus, the Heuer Carrera chronograph returned in 1996 as a high-fidelity re-edition original Carrera from 1963/64. Only the name “Carrera” was missing on the dial because of a conflict between brands. The reproduction encased hand-wound Lemania Caliber 1873. The first Heuer Carrera chronographs were still equipped with Valjoux Caliber 72.

Ever since the birth of the Carrera, Heuer had always been closely affiliated with motorsport. In the 1990s the brand seamlessly continued this liaison under its new name “TAG Heuer” in partnership with Formula One racecar driver Ayrton Senna. The palette of models changed. They were now arranged numerically.

In 1992 TAG Heuer pulled off another spectacular coup by becoming the official timer for Formula One. Through a new computerized timing system, TAG Heuer revolutionized televised Formula One racing by making it possible for lap times and rankings to be displayed on the viewer’s screen in real time. Watching Formula One on TV became much more interesting. Interest in watching televised Formula One racing started to skyrocket around the globe. The Formula One organization FIA (Féderation Internationale de l’Automobile) could accordingly demand higher fees for broadcasting rights. Formula One became a multi-million-dollar-business. It’s no wonder that Jack Heuer pulled Bernie Ecclestone’s leg by telling him who was the real power behind the success of his Formula One money machine: it was TAG Heuer and its exclusive computerized timekeeping system. 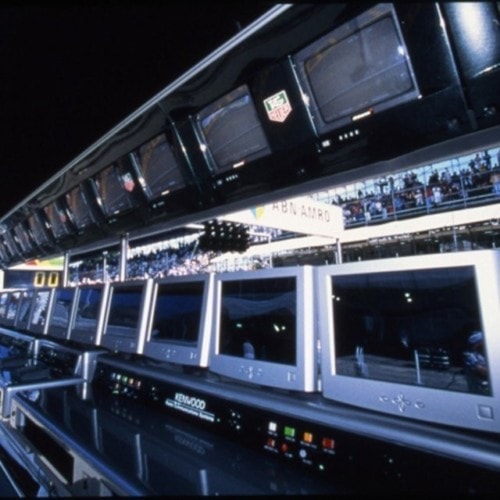 TAG Heuer became official timekeeper of the Formula One in 1992. TAG Heuer’s revolutionary computerized timekeeping system, which could display lap times and and intermediate results in real-time, assured that the auto race became a globally fascinating televised event – and thus also a multimillion dollar business.

Whereas TAG Heuer’s chronographs were icons of avant-garde wristwatches, there was a growing interest in the romance of a great history – and Heuer had plenty of past greatness to offer. The decision-makers in Bienne opted to revive a legend: the Carrera from 1964. Not until somewhat later did it come to light that the Heuer Carrera had in fact been launched in 1963. The re-edition was unveiled at the Grand Prix of Italy in Monza in 1996. This event was an important moment for Jack Heuer, the inventor of the Heuer Carrera: it was a chance for him to reconcile with a company that had once been his. Jack was invited to talk about the beginnings of the classic timepiece. The Carrera Re-Edition was a faithful reproduction of the first Carrera chronograph. Its fidelity to details went so far that the old name “Heuer” rather than the new moniker “TAG Heuer” was written on its dial. Only the name “Carrera” was missing due to a temporary conflict with Porsche over brand rights. Except for this detail, the Re-Edition was an exact replica of the original model, embodying the same minimalistic design, fifth-of-a-second calibrations on the ring around the dial, easy legibility and moderate diameter of 36 millimeters. (The replica was later enlarged to 39 millimeters.) Unlike its historical predecessor, the Re-Edition was powered by hand-wound Caliber Lemania 1873: the Carrera from 1963/64 had encased a Valjoux 72. The TAG Heuer Carrera 1964 Re-Edition came to the market in stainless steel with a black and silver dial, as well as in an 18 karat gold version – and these watches enjoyed such strong success that other versions with black and copper-colored dials soon followed. A special detail distinguishes these successors: their subdials are surrounded by contrastingly colored Daytona rings.

The re-introduction of the Heuer Carrera assured that the TAG Heuer brand, which had been associated with avant-garde design for ten years, revived its illustrious past. This proud history also fascinated the French LVMH Group, which paid the enormous sum of 900 million Swiss francs for the privilege of taking over TAG Heuer in 1999. TAG Heuer now sat in the same boat as other charismatic brands such as Louis Vuitton, Christian Dior and Moet et Chandon champagne. There were plenty of good reasons to let corks pop with a bang!