Just over two years ago, Hamilton celebrated the 50th anniversary of the original Pulsar by releasing the PSR. In the two years since the debut of that watch, Hamilton has given us two additional blacked-out versions, including the PSR MTX to celebrate the pending release of the latest installment in the Matrix movie franchise. While the recent releases have leaned into a futuristic style, this newest PSR might just be Hamilton’s most versatile take on this watch to date.

The Hamilton PSR is a modern re-edition of a vintage watch. However, both the original Pulsar and the PSR still manage to look futuristic in 2022. In fact, you could argue (it would be a stretch, but you could) that a certain smartwatch that until very recently needed a gesture to illuminate its screen might have taken some influence from the original Pulsar. Both the Apple Watch and the Pulsar represent the pinnacle of technology at the time, and while one has become ubiquitous, the new PSR is becoming more versatile.

Inspired by the original Pulsar, this new green-display model slots nicely into the existing Hamilton PSR collection. You might be thinking, why has Hamilton branded this watch the PSR instead of going all in on Pulsar? Well, it’s complicated, as Hamilton sold the Pulsar brand in 1978. While that is a story for another day, we will look at the latest addition to the line that traces its roots back to the original integrated-bracelet digital watch. 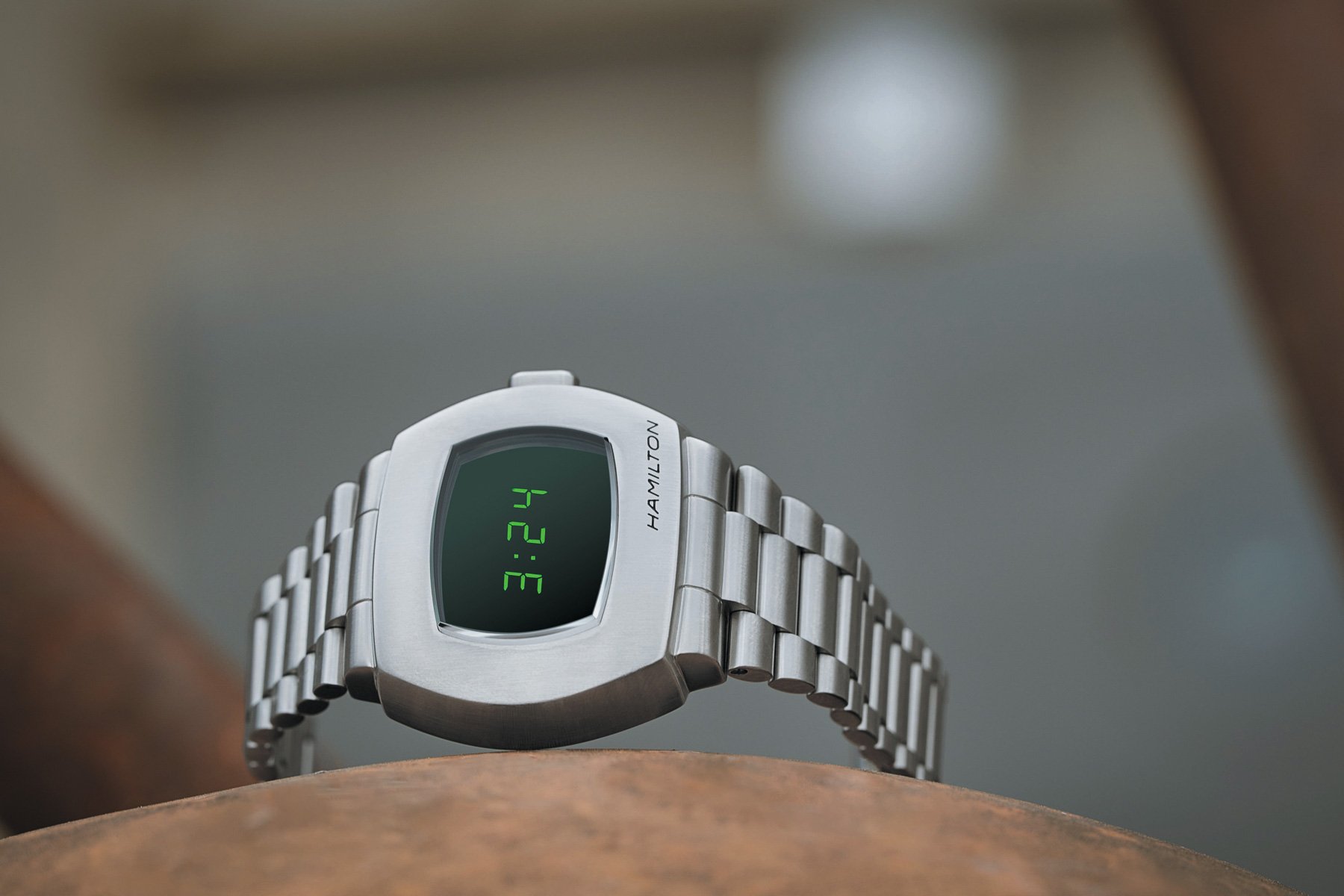 More than two years on from the release of the original Hamilton PSR (covered here by Balazs) the PSR is becoming more of a collection than a standalone model. We have now seen two limited-edition models — one in gold PVD and a blacked-out version with a green display to celebrate the Matrix movies. Earlier this year, another stealthy black version with a red LCD-OLED hybrid screen joined the family (covered by Jorg here). While each of these is great in its own right, expanding this range seems like the logical choice. As Jorg mentioned in his coverage of the black-and-red model, there are several color combinations that would look great. I think Hamilton might have found the best combination yet. 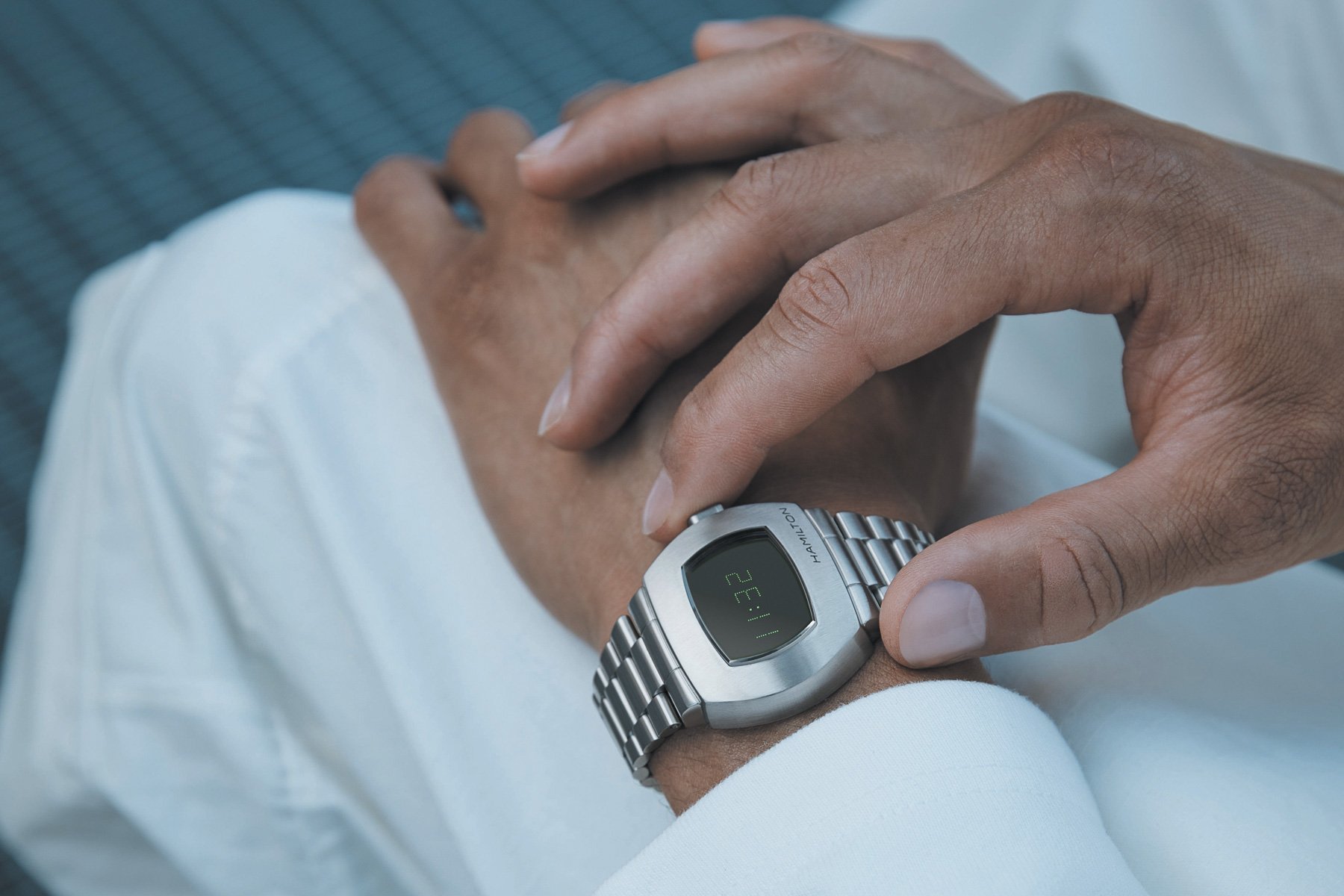 The inclusion of a green digital display in a brushed stainless-steel case with a matching bracelet makes for an attractive combination to help round out the line. It is fun to think of the display as a dial. While the red-display PSR stays true to the original, the green display is a bit easier to wear on a daily basis. 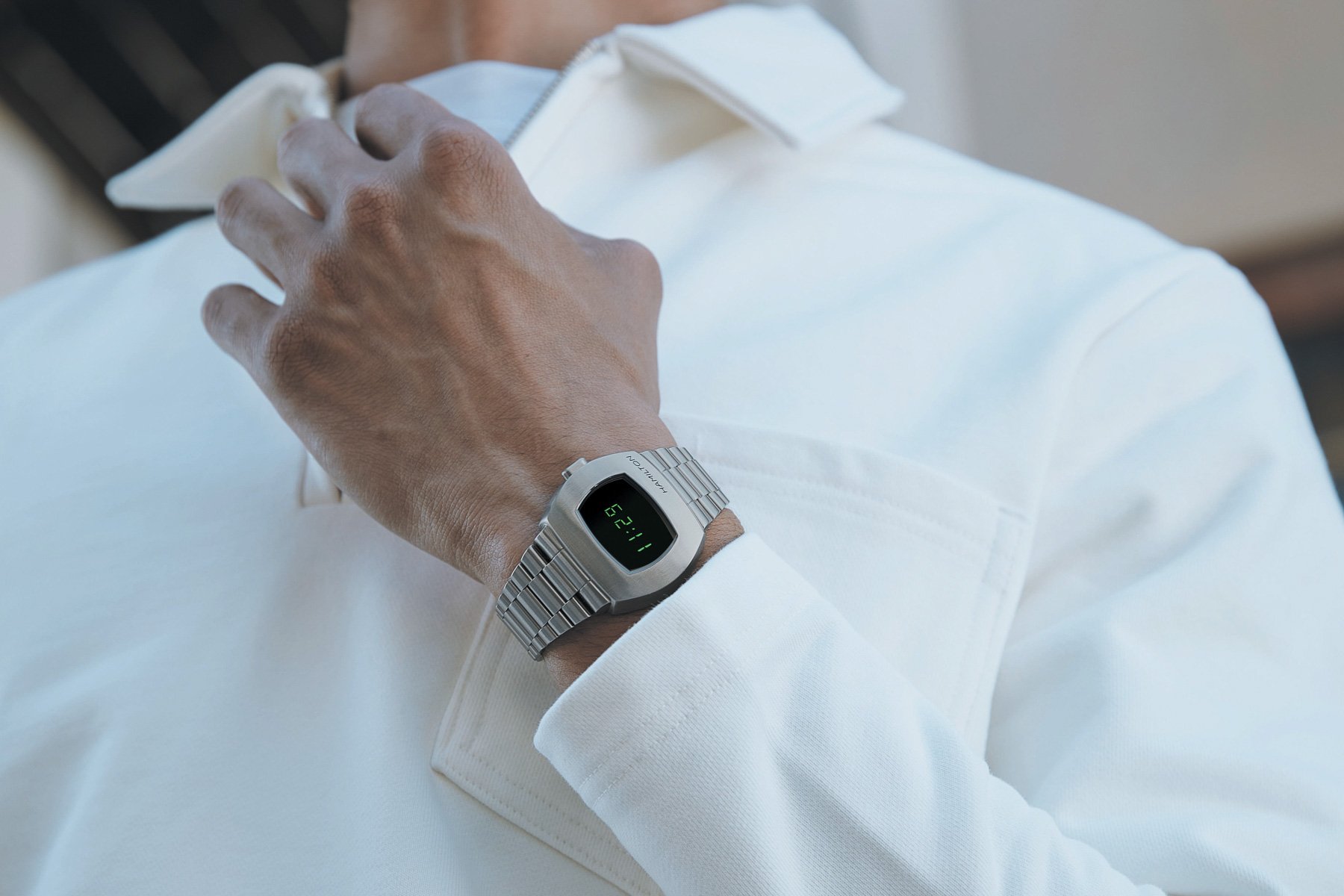 Originally released in 1970, the Pulsar introduced a unique way to tell the time — a push button on the side of the case. While this isn’t as convenient as simply looking at the analog hands on your watch, neither is flicking your wrist to get your Apple Watch screen to light up, let alone reaching into your pocket to retrieve your phone. The new Hamilton PSR does have an always-on display, showing dotted numerals when idle and brighter, more “solid” numerals with the push of the button. This ties the aesthetics of the original display to available modern technology and battery life. 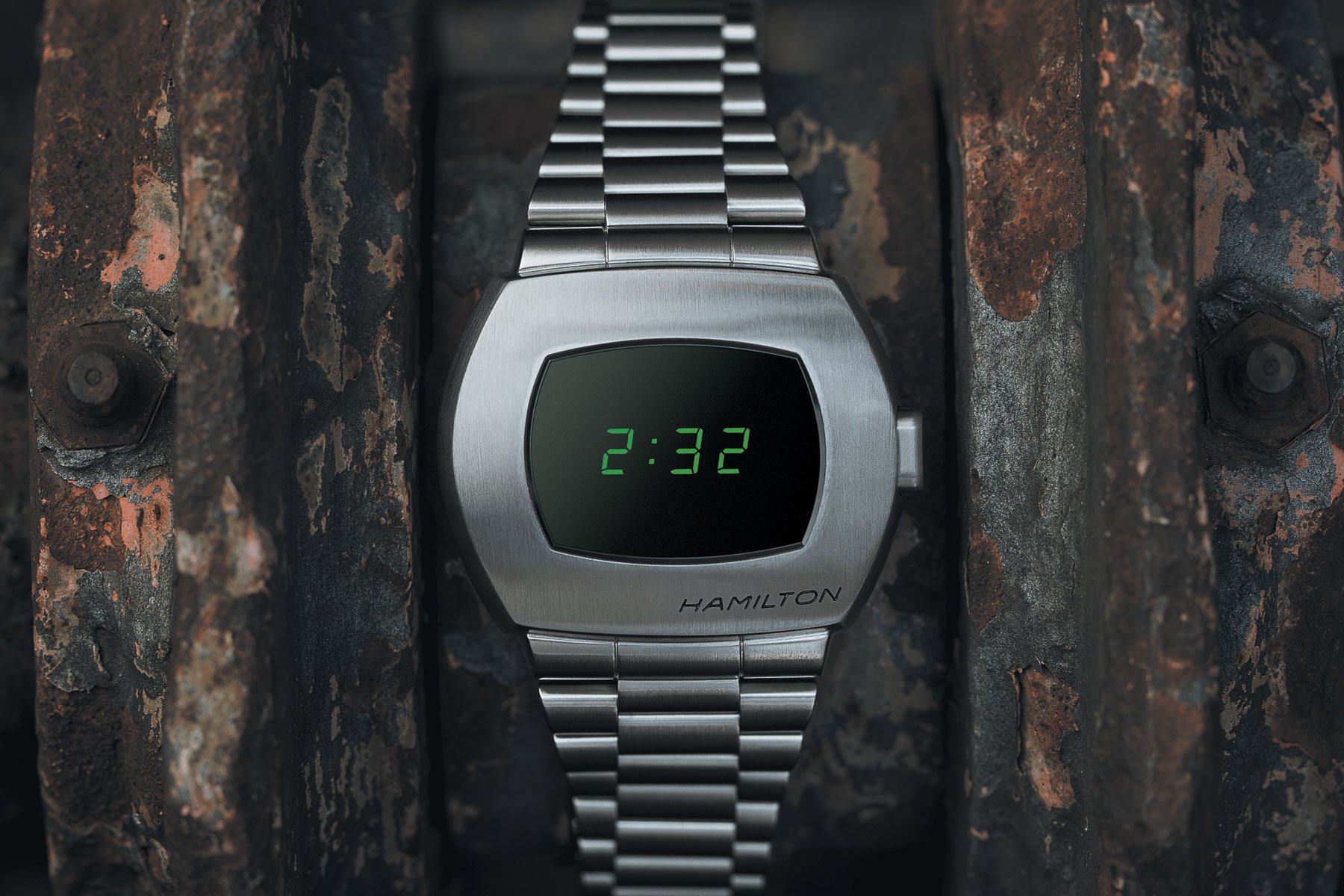 The case dimensions work nicely on a wide variety of wrists. The 40.8 × 34.7mm case has an oblong design, almost like a barrel turned on its side. While square or oblong watches can wear larger than round ones, the lack of lugs helps the case hug your wrist. The bracelet starts at a seemingly wide 24mm but tapers to 19mm at the clasp. The President-style construction makes it comfortable on the wrist, and it does a nice job of balancing the watch head. At 13.3mm thick, the PSR does have some heft to it, but in a good way. The overall package of the watch and bracelet makes for a pleasant wearing experience. 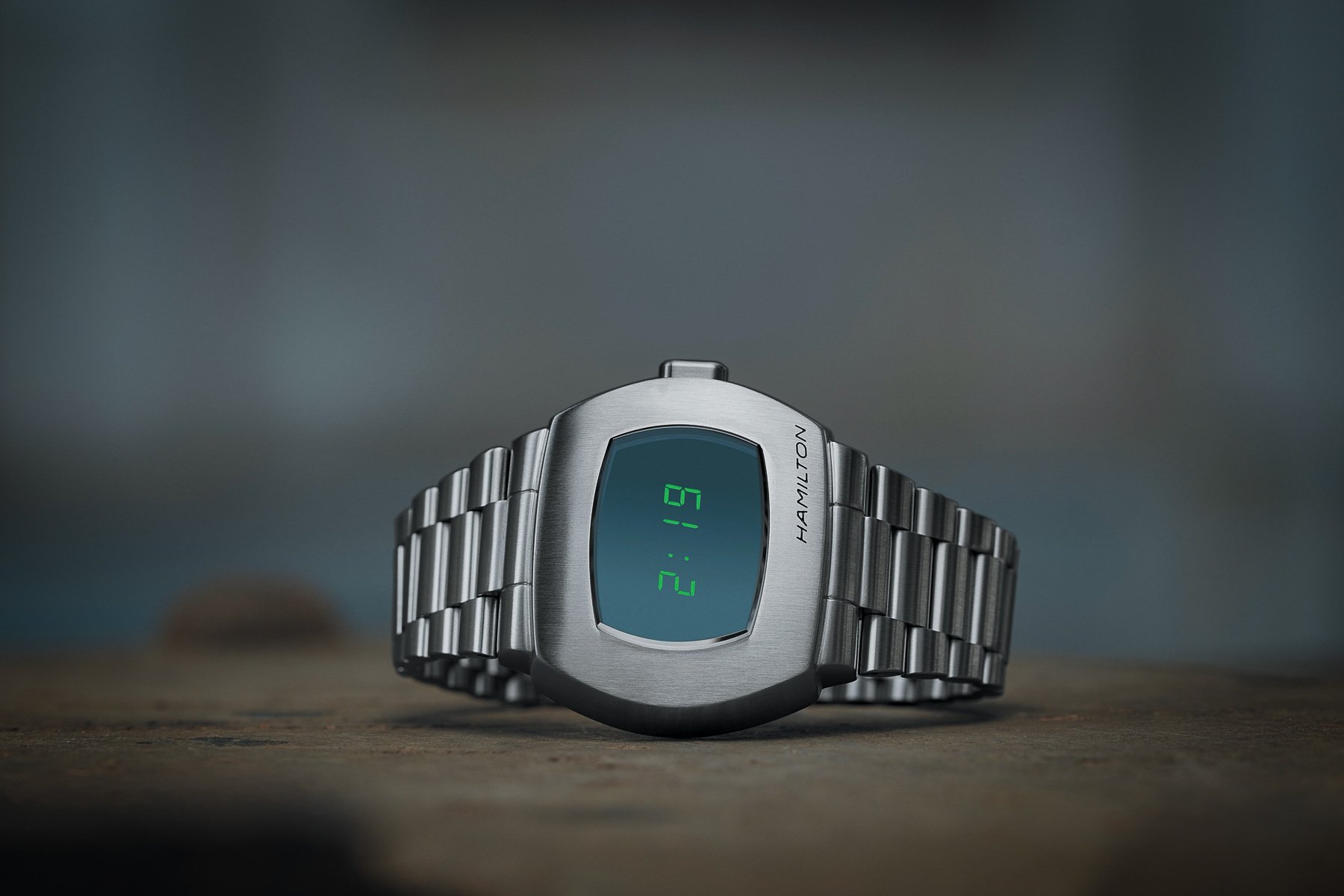 Previous Fratello articles have name-dropped celebrities who have worn the original Pulsar (like Joe Frazier, Gianni Agnelli, Roger Moore’s James Bond, and Elvis). While I won’t do that (wait, I just did…), I would imagine that some of those celebrities might have opted for the green display back in the day. 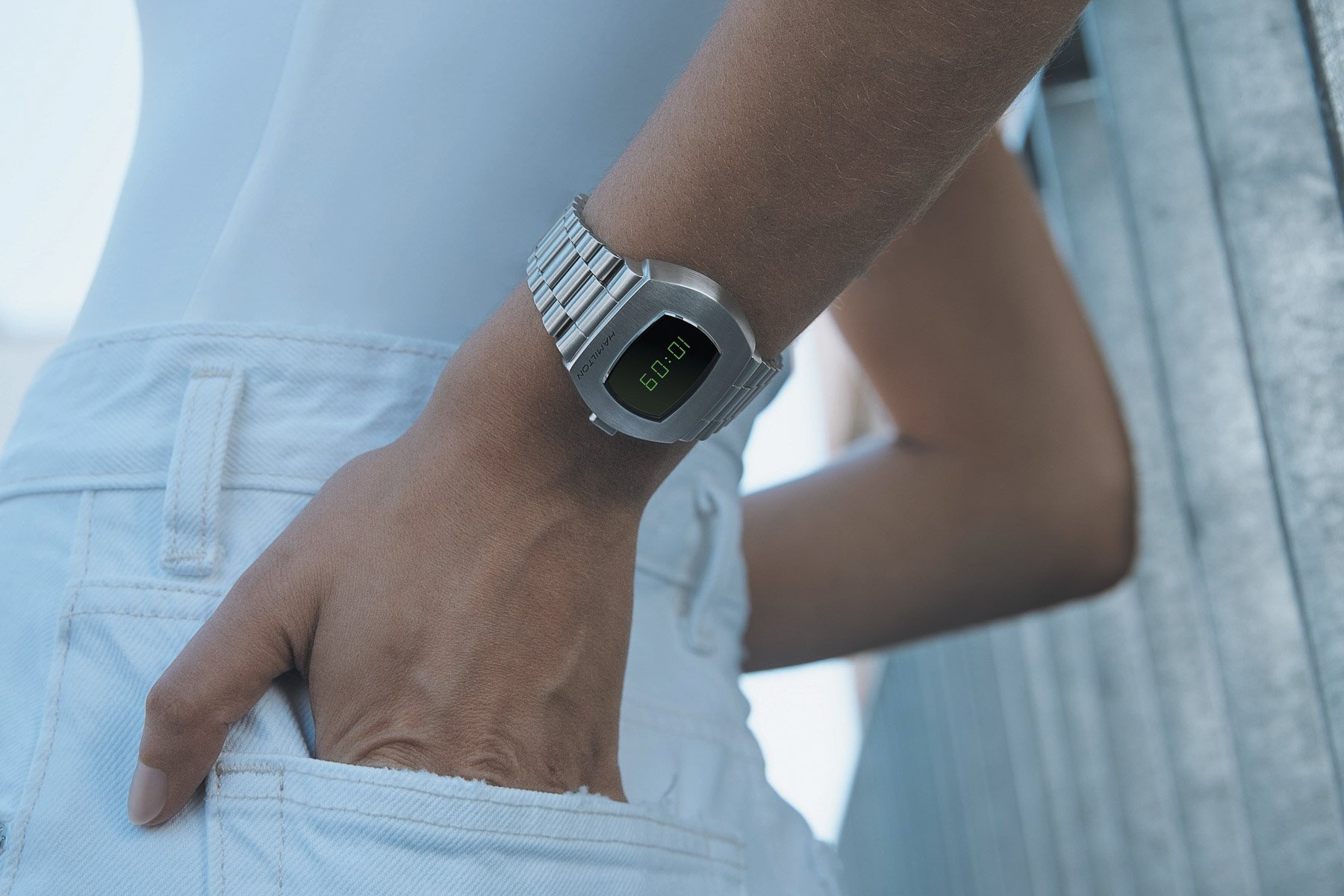 We like it when our favorite b(r)ands play the hits. Two years ago, we welcomed the Hamilton PSR back into production. Adding new display options takes a familiar classic and makes it feel new. Taking the PSR from a standalone model to a collection is something that wasn’t possible when the original Pulsar came out. Is the PSR as revolutionary as the Pulsar was when Roger Moore showcased it in Live and Let Die? No, and given brand affiliation for a certain movie franchise, we probably won’t see this watch on the wrist of whoever replaces Daniel Craig anytime soon. However, at €795, it has become much more accessible and remains true to its 1970s-icon heritage.

What are your thoughts on this latest green-display PSR? Let us know in the comments below.