It’s been only two months since Hamilton released the special limited-edition PSR MTX to commemorate the release of the first Matrix film. That version of the legendary PSR featured an all-black PVD-coated case and bracelet and came with a green-colored display. Personally, I loved it because it looked very cool. For the newest PSR, Hamilton has chosen the same stealthy black aesthetic, combining it with the classic red display seen in the movie Live and Let Die. Could this be the perfect Bond watch for 007’s nighttime missions? If not, it could be the perfect timepiece for yours.

The Hamilton PSR is one of the coolest watches out there! And it’s not only me who thinks that. We love the watch here at Fratello, and some of us have one. There are plenty of people who are not necessarily into watches but love seeing the quirky and cool piece from the 1970s. Over five decades after Hamilton introduced the first Pulsar model, it has become an iconic design. On top of that, it comes with the great story of being the first digital watch. As such, many celebrities back in the day wore the famous P2 model. It was the start of a great legacy that Hamilton celebrated with the release of the Hamilton PSR in 2020. 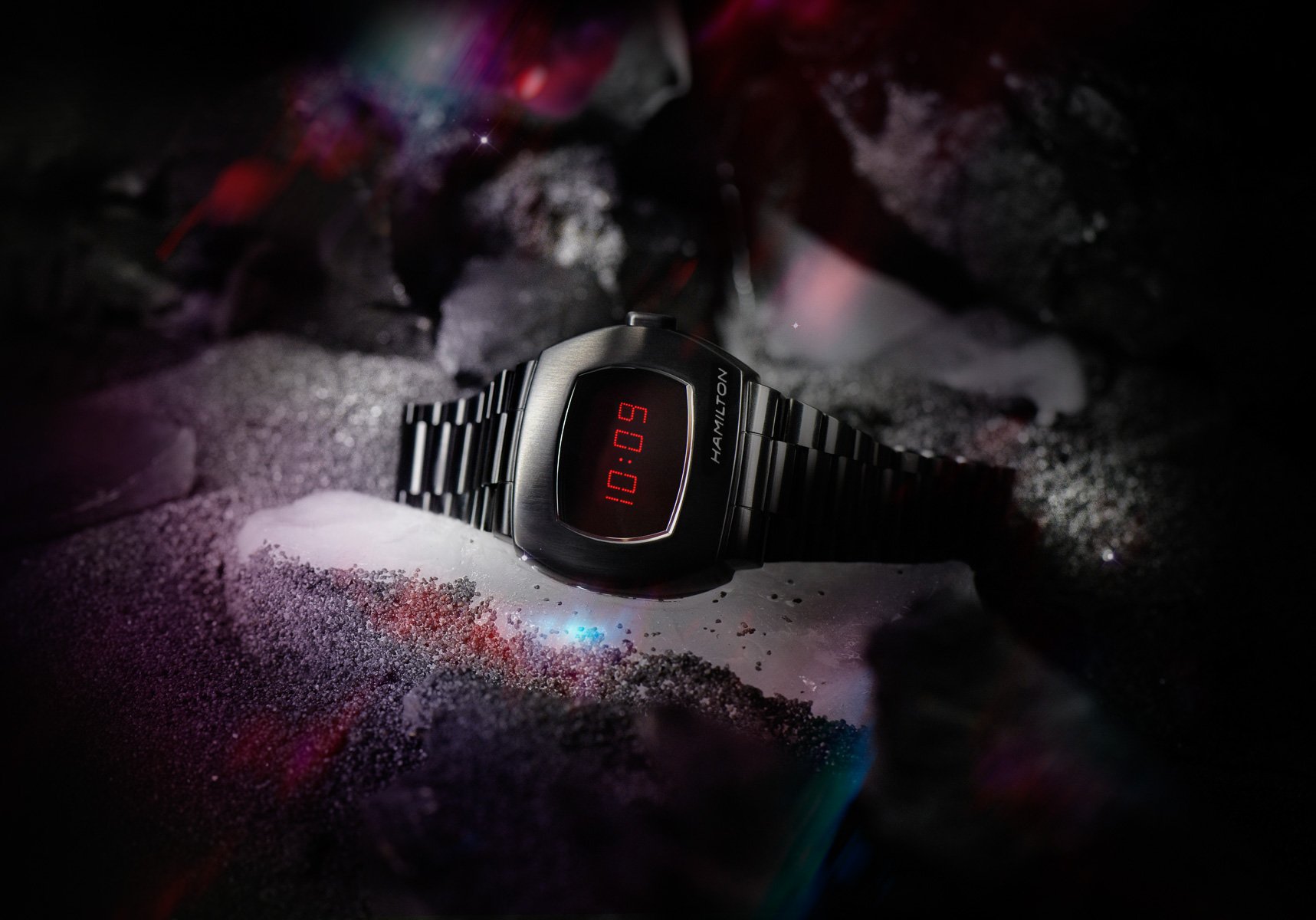 The return of a legend

Balazs wrote the introduction article of the two models that Hamilton released in 2020. The first was the regular stainless steel model that is part of the regular Hamilton collection. The second was the stainless steel version with a gold PVD coating limited to 1970 pieces. The gold version was a very cool watch, but for me, it was the stainless steel version that told the story of this iconic timepiece best. A whole string of celebrities wore the watch from Elvis and Elton John to Keith Richards and Giani Agnelli. But in my mind, it has always been the watch that Roger Moore wore as James Bond in the 1973 film Live and Let Die. 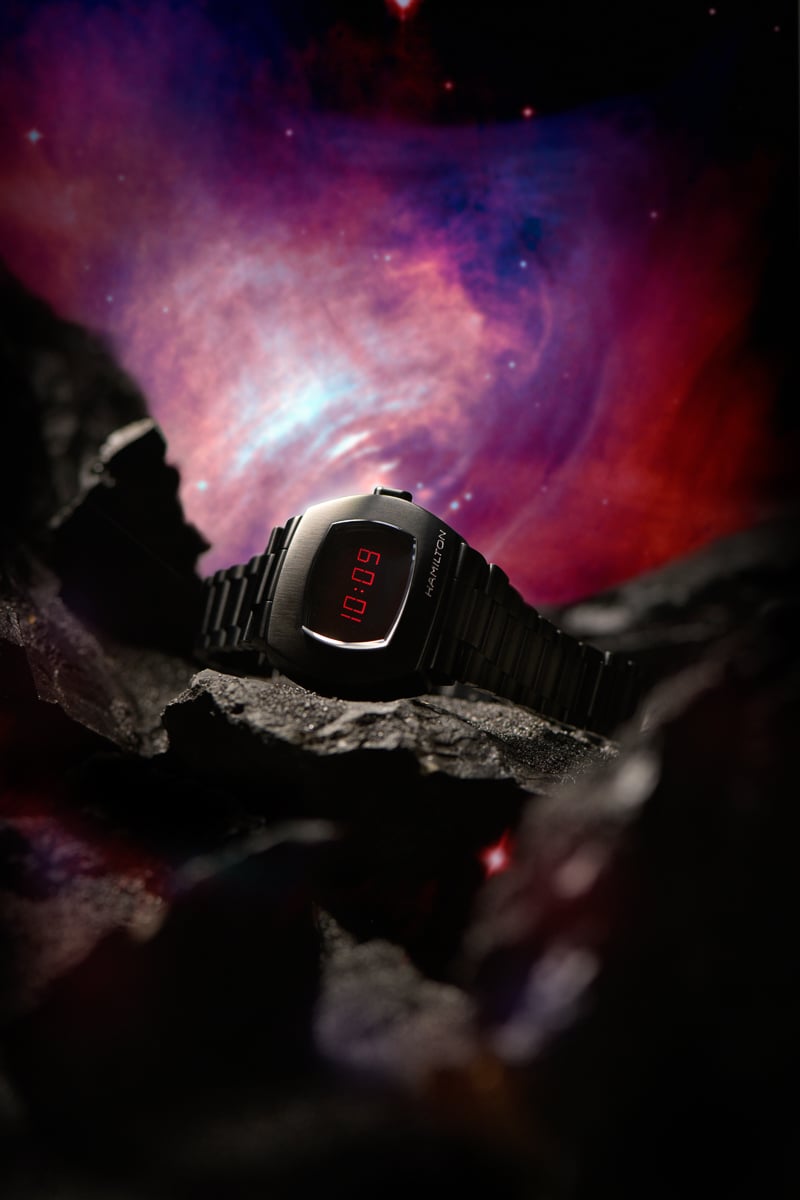 Even if you don’t know anything about the watch’s story, the cool factor of the design is as relevant as ever. The retro flair looks far from outdated. If anything, the updated hybrid LCD and OLED display balances modern tech with a historically important design. As Nacho explained in the review of the PSR MTX, the idea behind the watch was fairly simple. Hamilton teamed up with Electro-Date in 1970 to create the first prototype of a watch that required the press of a button to display the time in glowing red digital numbers on a black “dial.” 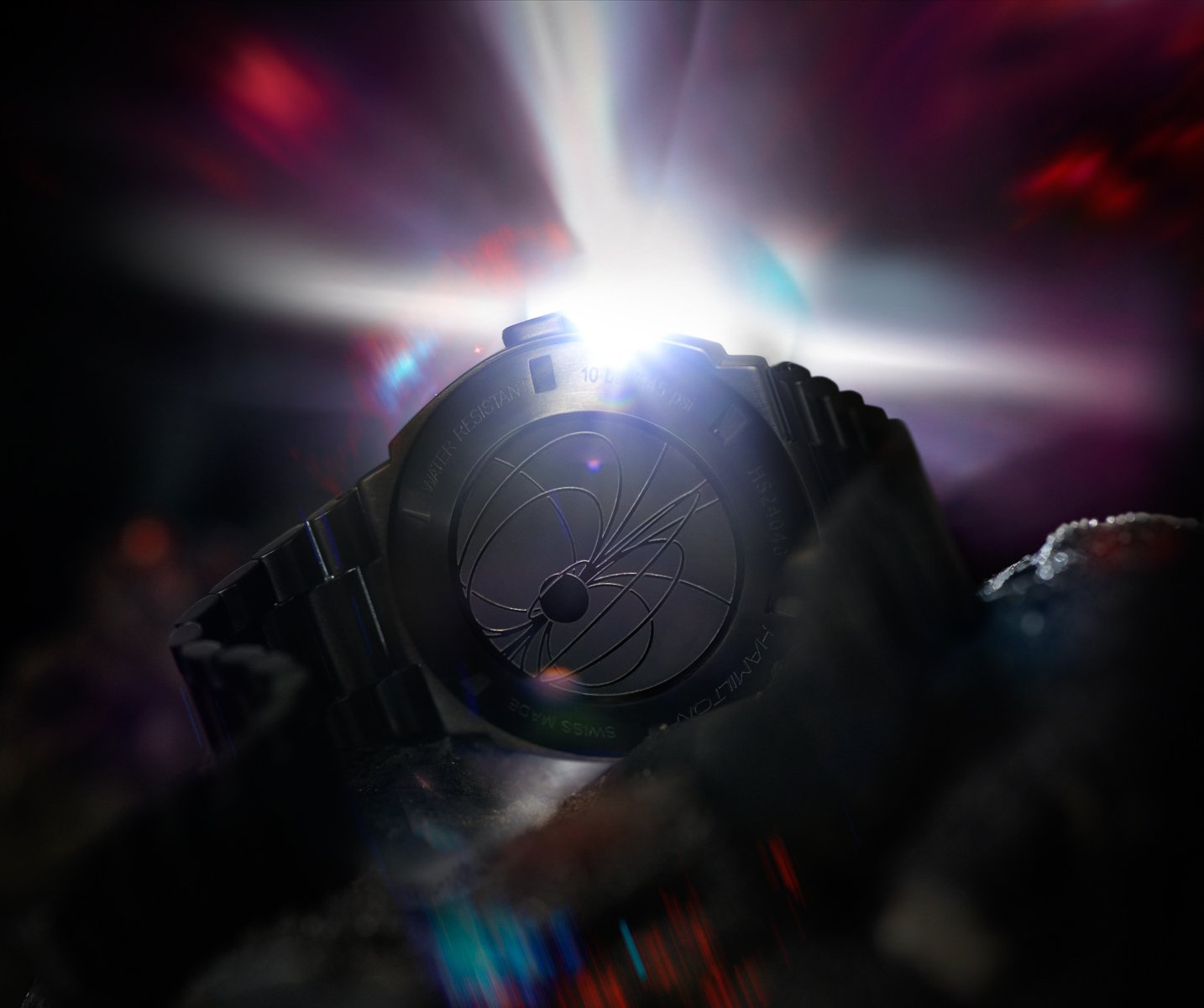 Optimizing the idea behind the PSR

Fifty years later, Hamilton changed that basic idea by introducing the hybrid LCD and OLED display. For the new PSR models, the time is always visible on the screen, made possible by the reflective LCD. A press of the big button on the side of the watch makes the OLED numerals light up brightly. As a result, you can perfectly read the time no matter the lighting conditions. I like the idea that you do not always have to push the button to read the time. Sure, it compromises the initial concept somewhat, but in all honesty, it is definitely more practical. 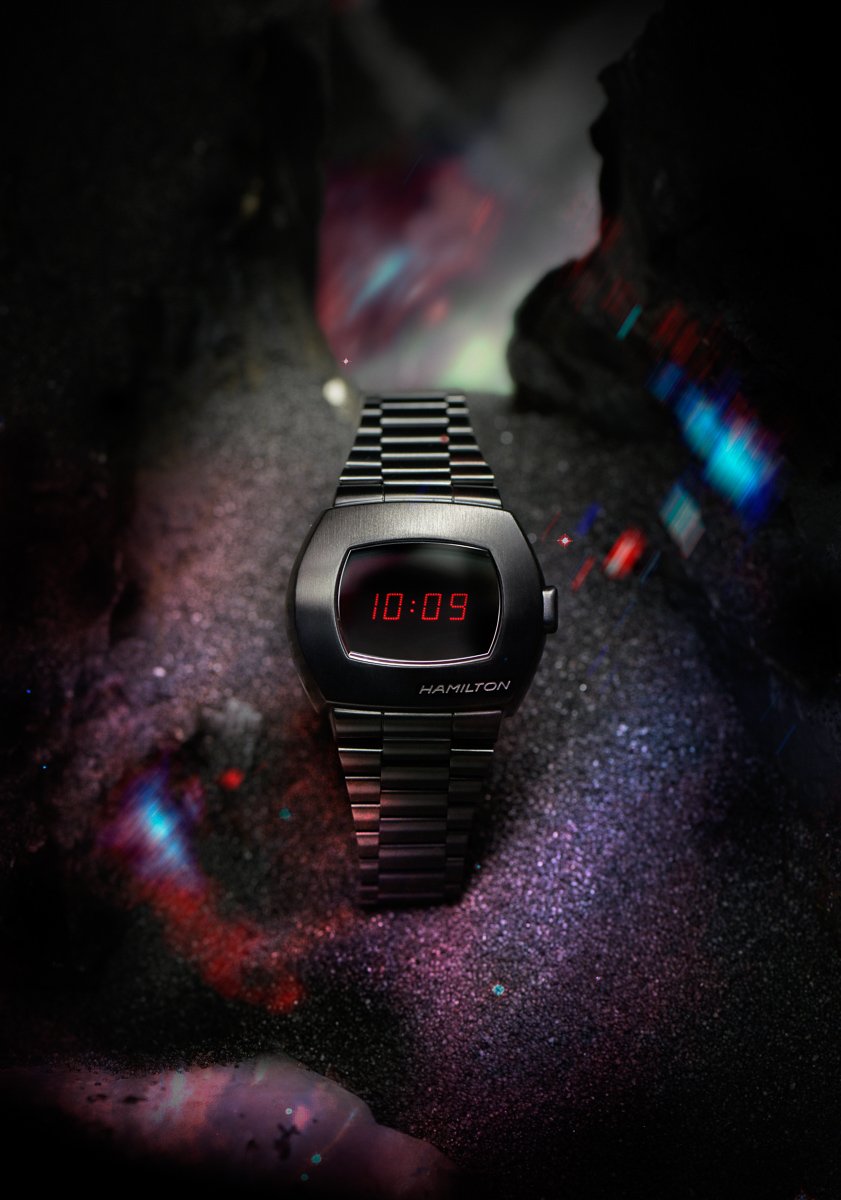 Additionally, Hamilton recognizes the great design potential of the watch by releasing new versions. As mentioned, after the stainless steel and the gold-PVD-coated versions, the PSR MTX introduced an all-black aesthetic with a green display. We had the watch in the office for review, and I had the chance to wear it for a bit. I was impressed by the color combination and how well it fits the story of The Matrix. Now Hamilton has combined the stealthy black look with the classic red display. In addition to this, I can think of a few other combinations that would look incredibly cool. But let’s focus on this version first. 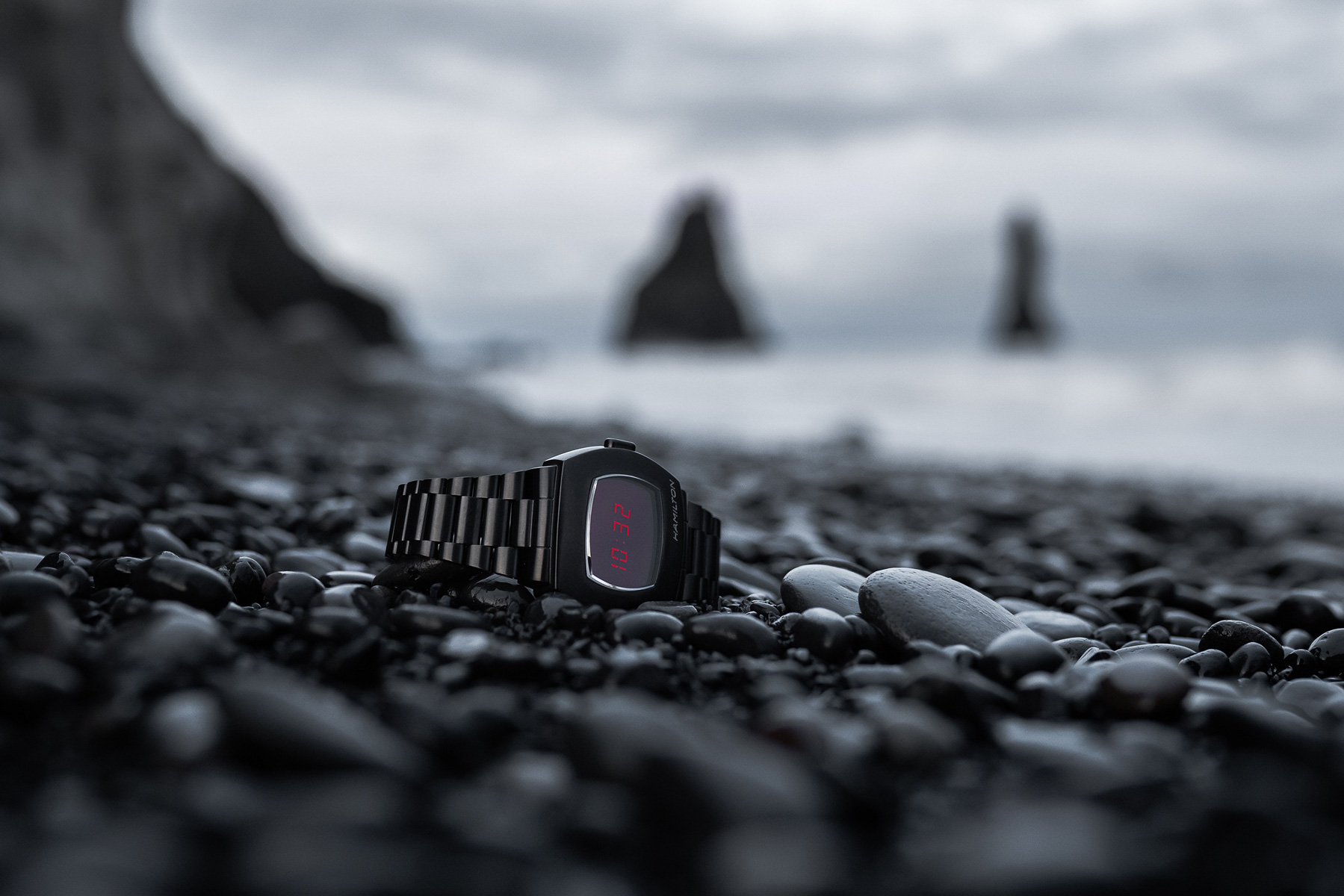 Other than its black PVD coating, this PSR has all the standard specs of all the previously released models. It features a rectangular stainless steel case with rounded sides that measures 40.88mm wide and 34.7mm long. The case is also 13.3mm high, and with its friendly dimensions, it sits perfectly on a variety of wrist sizes. The watch comes equipped with a sapphire crystal with an anti-reflective coating and is water-resistant to 100 meters. A very comfortable President-style bracelet holds it to the wrist, tapering nicely from 24mm at the lugs to a slim 19mm at the clasp. 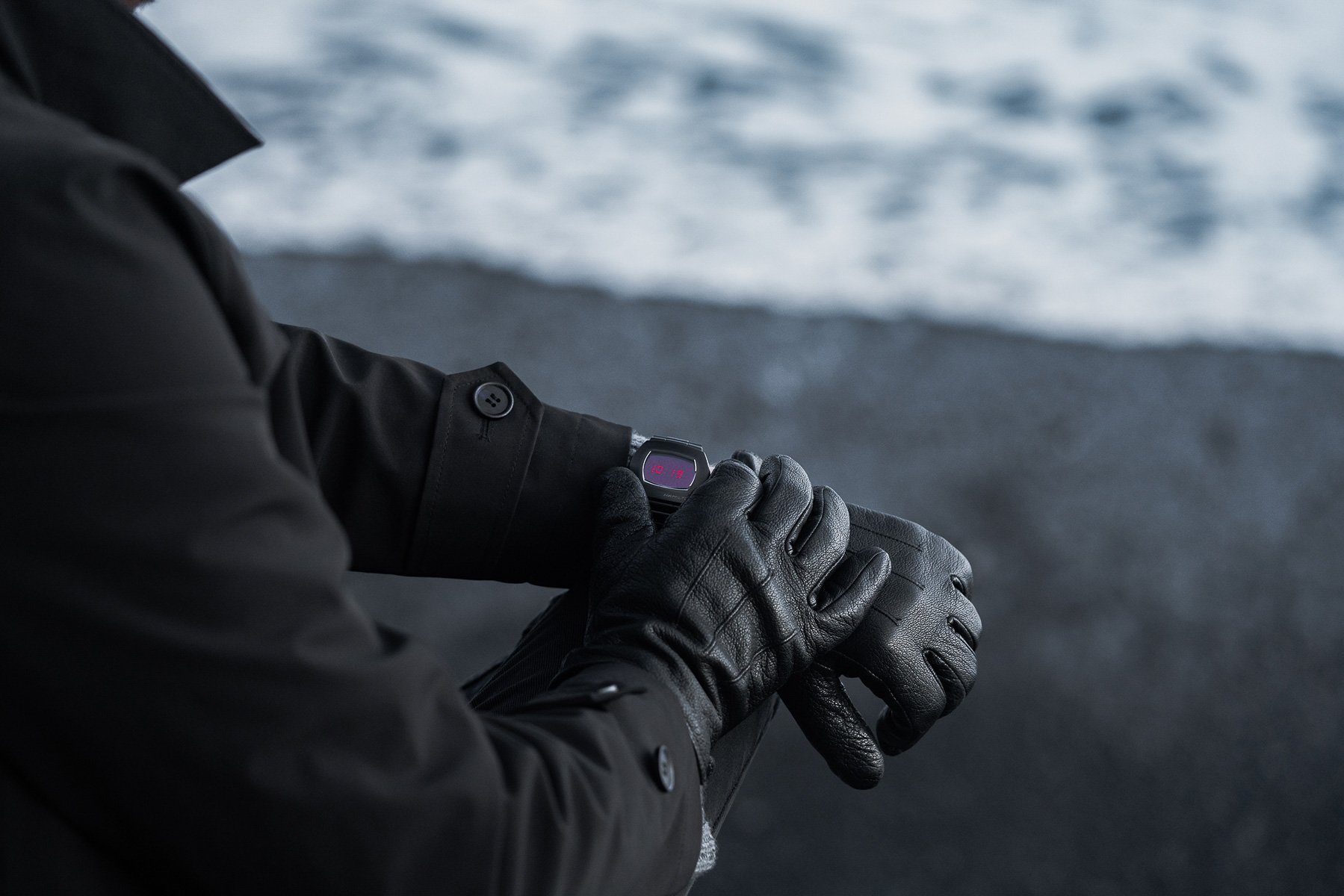 If the looks alone are not cool enough, I would highly suggest putting a PSR on your wrist. It’s an unbelievably comfortable watch, and only on the wrist will you be able to fully recognize how great it really is. Every time I wear a PSR, I am reminded of its brilliance. This new version is a logical addition to the PSR line-up, and it reminds me once more that I should add one to my collection.

The new all-black PSR is also a standard-production model, so there are no limited numbers to contend with. It will be available for €975, and what you get in return easily beats more expensive watches in iconic value and cool factor. For more information, check the Hamilton website here.

Hot Topics
Introducing: The Omega Speedmaster Super Racing With Spirate System
165 comments
Design Vs. Specs — Which Is More Important To You When Buying A Watch?
87 comments
New Release: The Limited-Edition Seiko Prospex SLA067J1 Diver
63 comments
My Predictions For New Omega Speedmasters In 2023
60 comments
The Best Independent/Microbrand Alternatives To The Rolex Explorer In 2023
52 comments
Popular
Hands-On With the Seiko Prospex SRPC91K1 – Save The Ocean
Robert-Jan Broer
15
Oris Classic Date Or Save Up For an Omega De Ville Prestige?
Robert-Jan Broer
17
Watches Of The King – Elvis Presley’s Notable Timepieces
Balazs Ferenczi
9