Panerai is a brand that has delved deep into its historical catalog many times to reinstate and solidify the importance of its Radiomir collection. The line harnesses the manufacturer’s maritime references, as well as its historical ones. Panerai’s prototype of the Radiomir watch underscored the beginnings of what would become one of the world’s most recognizable designs. The embryo of a concept centered around legibility. A watch initially conceived as a military tool but one that has since become a part of many a self-respecting horophile’s collections.

Now, Panerai merges the Radiomir design DNA with another important chapter in the brand’s story. The Radiomir Eilean brings together the signature elements of the brand’s military wristwatch collection from 1936 and its links to the marine industry. The new 45mm model is named after a yacht that was built in the very same year and features a case crafted from patina steel. It promises all the hallmarks of the familiar Radiomir watch but is enriched with some significant references to the sailboat and its decades-long life sailing the seas of Europe and the Caribbean. 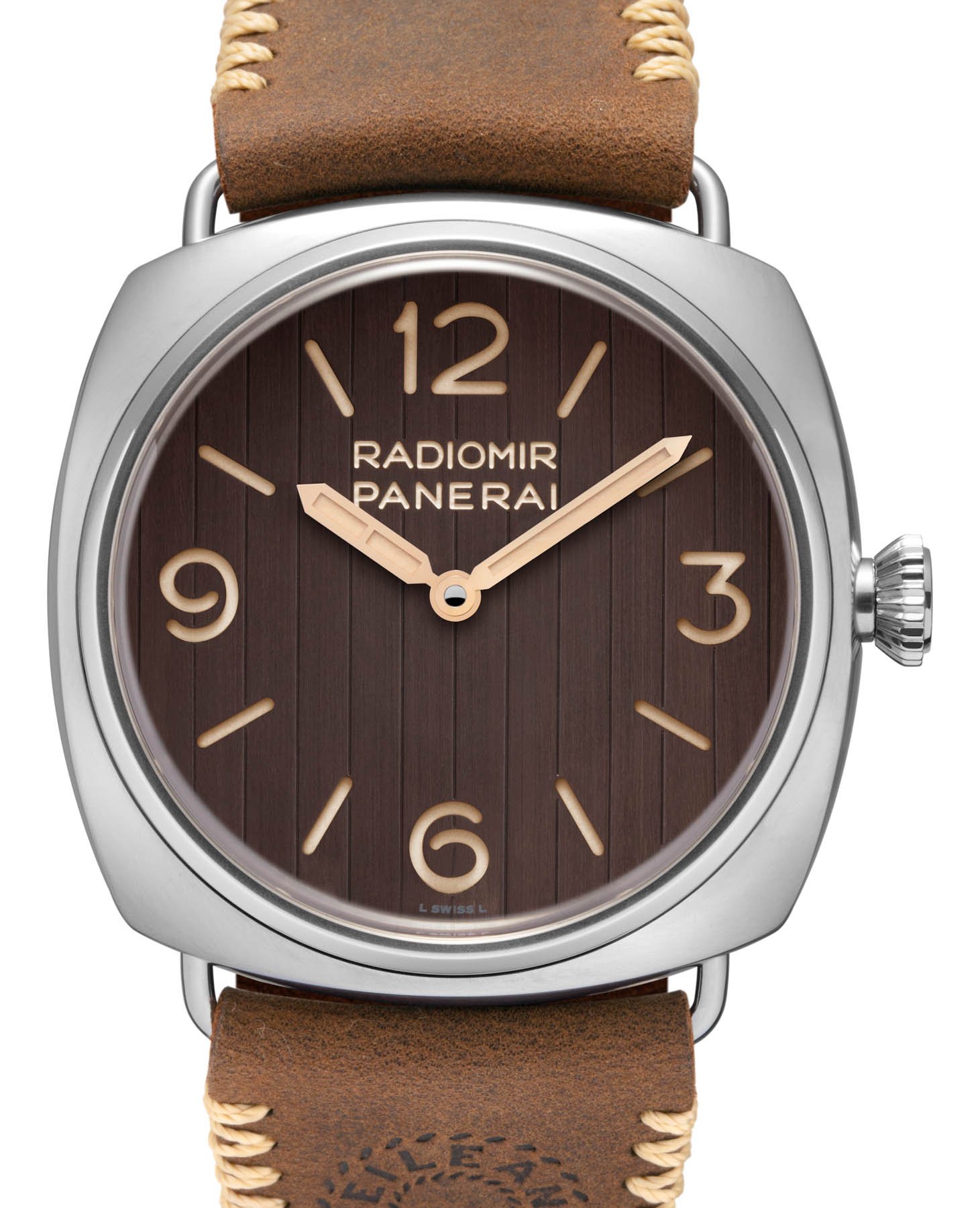 The birth of dial lume

At the time of the first Radiomir watch, Panerai was already supplying dive watches, compasses, and depth gauges to the Royal Italian Navy. This legible dive watch then emerged – a commissioned timepiece with uniquely glowing indexes and hands made from one of Panerai’s proprietary compounds. The Radium-based powder, rendering the dial luminous in the gloomiest of depths, was patented in 1916 by Guido Panerai – the grandson of the company’s founder, Giovanni Panerai. The Radium paste was a self-luminescent compound that would glow richly at night, making it a key element used in Panerai’s production of military watches.

The Radiomir watch has since enjoyed over 80 years of success…

Issued just in time for the Second World War, the Panerai Radiomir featured a cushion-shaped steel case attached to a heavy-duty leather strap courtesy of a set of wire lugs welded directly onto the case. The Radiomir watch, although not initially made available to civilians, has since enjoyed over 80 years of success, the Radium-based lume now replaced by a much safer, non-radioactive, luminous material. Since its prototype, the Radiomir has certainly progressed in respect to Panerai’s manufacturing techniques (the brand went on to create cases made from a single block of steel from the 1940s onwards), but has strayed very little from its roots. 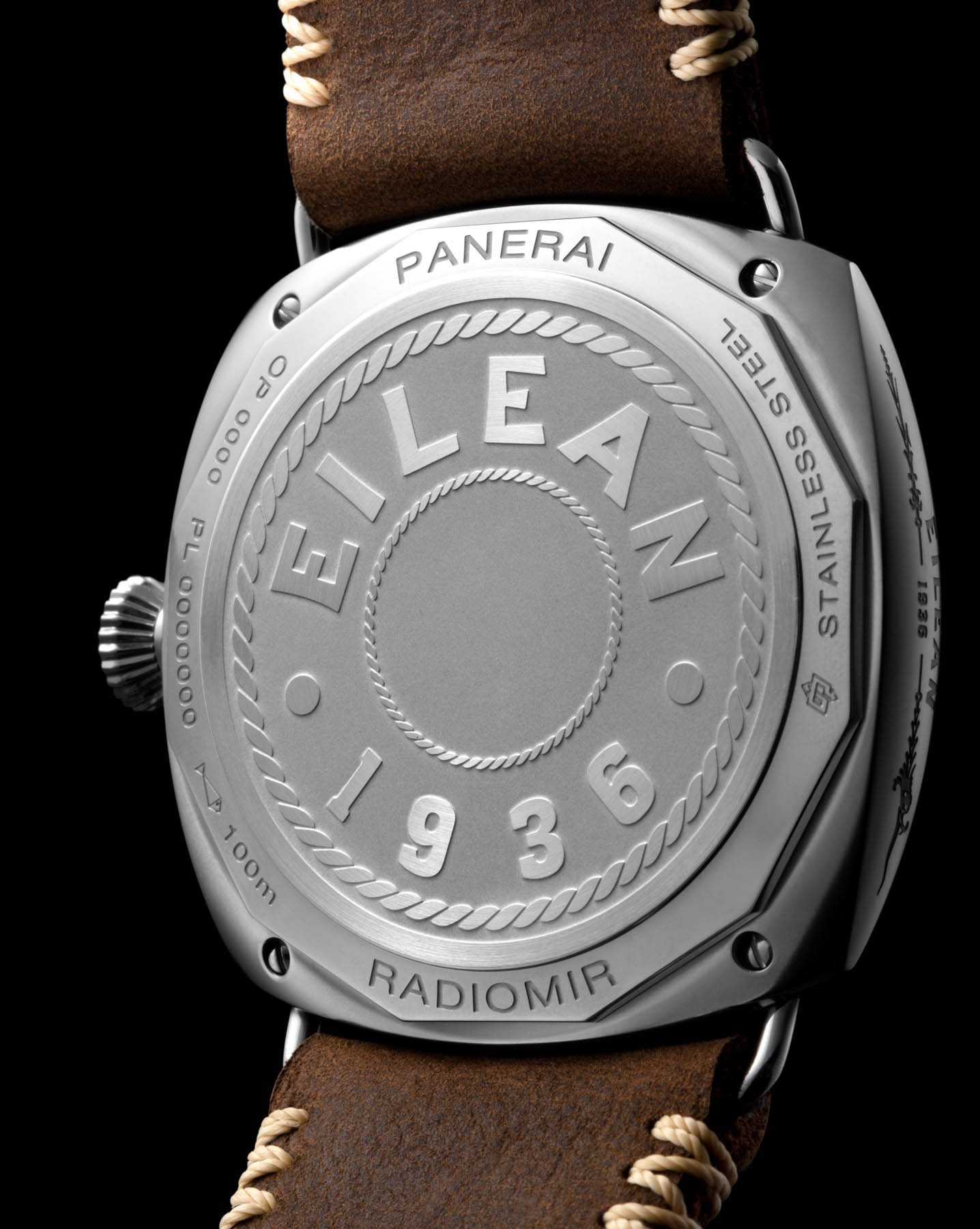 The new limited edition Radiomir Eilean tips its proverbial hat to the 70-foot ketch designed by boat builders and Scottish steel merchants, William Fife & Son in Fairlie. The 1936 yacht was clad in a stunning teak deck that is now reflected in the dial of the new Radiomir watch. Her waterlines were inspired by J-Class yachts competing in the America’s Cup in the 1930s. Before becoming badly damaged, she had cruised the Balearic Islands and even made an appearance in the music video of Duran Duran’s 1982 hit, “Rio”.

After she collided with a ferry near the coast of Portugal, she sank to the bottom of the English harbor. Like a glimmering plot of lume on the dial of a Radiomir watch, Eilean was spotted under the murky depths of the sea and dredged up in 2006 for a three-year restoration process coordinated by Panerai’s CEO, Bonati. A team of skilled workmen has managed to revive 60% of Eilean’s original planks along with her bell, anchor, and wheel. She will arrive this month at Portofino as part of a celebration of Italianità, coinciding with the release of the new Panerai Radiomir Eilean watch. 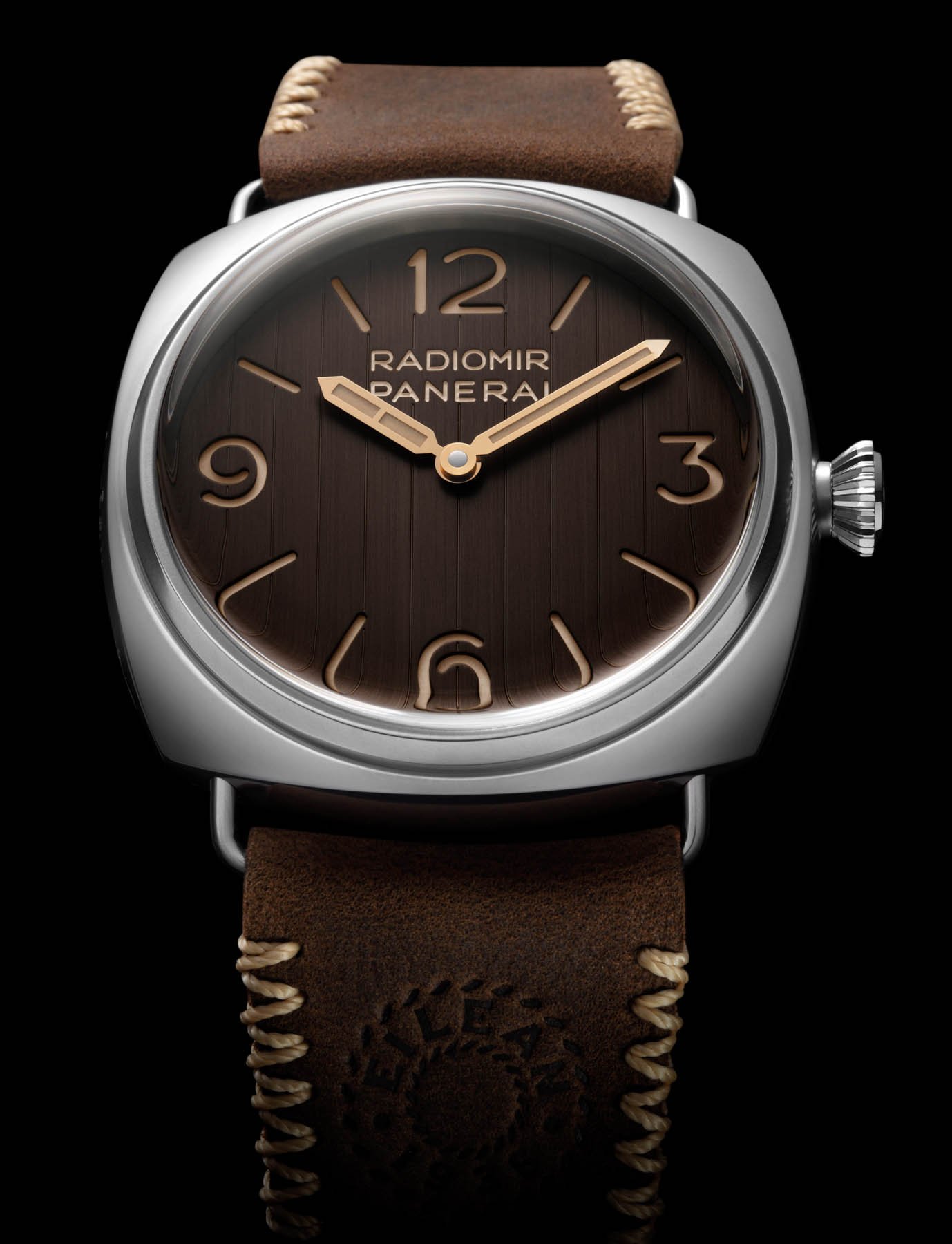 Faithful to the appearance of earlier models, the design of the Radiomir has changed very little for the release of this new limited edition timepiece. It boasts the same cushion-shaped case and wire lugs and is powered by a hand-wound movement. The patinated steel material used for the case of the Radiomir Eilean watch was chosen for its warmer, softer, shimmering luster that connects well with the vintage-style golden finish seen on the central hour and minute hands of the dial. These hands, as well as the numerals revealed through Panerai’s signature sandwich dial, are treated with Super-LumiNova material and do truly come to life at night. The dial elements diffuse a rich green glow through a glass front crafted from scratch-resistant and anti-reflective sapphire crystal. By day, the teak deck-inspired striations across the surface of the model’s indulgent brown dial can be fully appreciated.

…surrounded by sail rope and the Panerai Radiomir name.

Apparent from every angle, the Radiomir Eilean watch displays a number of nautical-inspired design references. The number to which the watch is limited — 449, is a direct reference to the yacht’s sail number. The unique number is also engraved into the matte-finished patina’d stainless steel case, featuring 100-meter water resistance. The back of the case has also been engraved with a direct reference to the detailing on the boat’s boom, depicting the words “Eilean 1936”. The reference is surrounded by sail rope and the Panerai Radiomir name. Decorating the boat’s hull is a dragon emblem that is also echoed on the left-hand side of the Radiomir’s case. 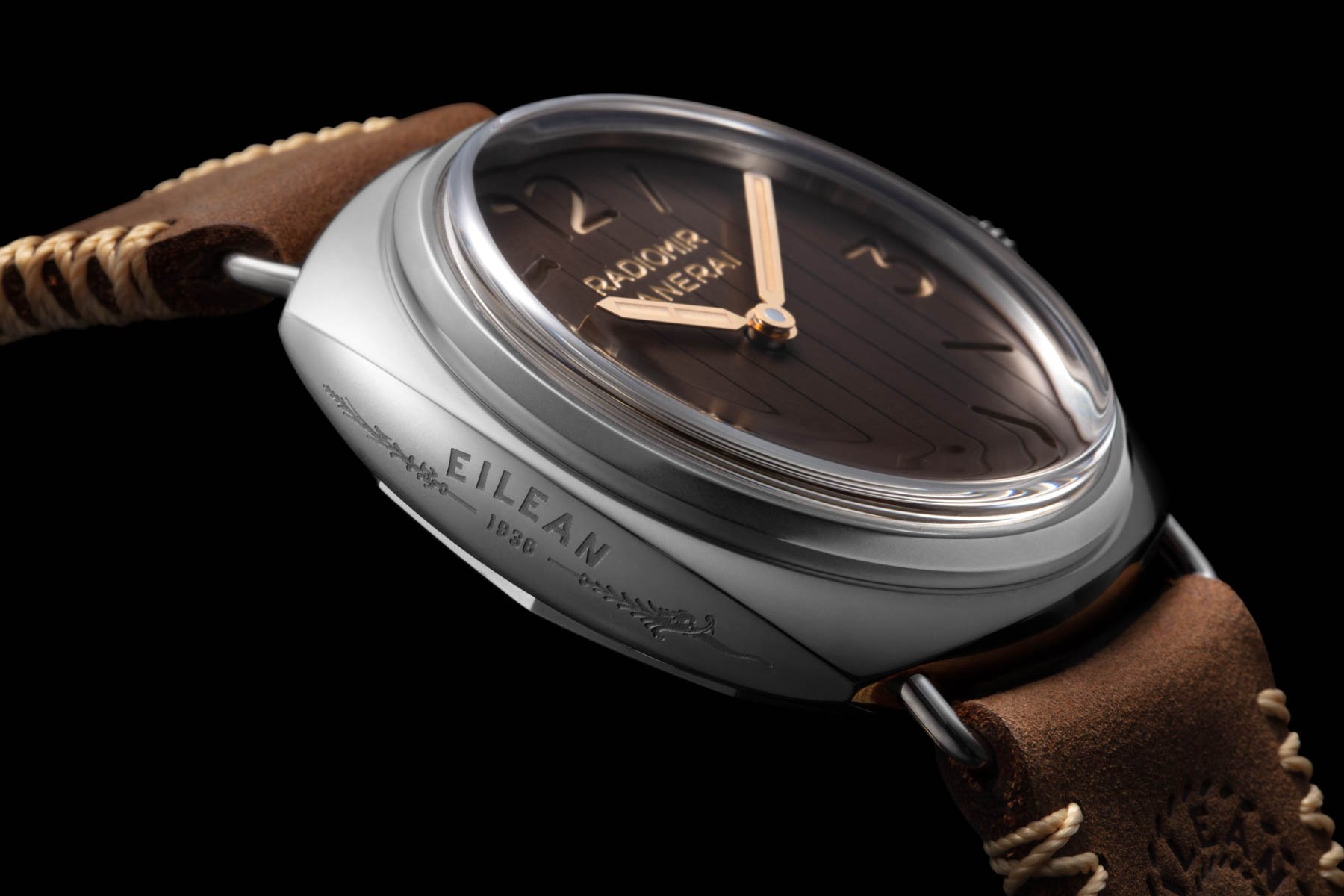 Beating inside the case is a Neuchatel-born, Manufacture movement, designed by experts at Panerai and equipped with a rather practical 3-day power reserve. The P.6000 caliber is fitted with 19 jewels and performs at a rate of 21,600 alternations per hour. Incabloc technology ensures an anti-shock environment for the hand-wound engine, which comprises a total of 110 individual hand-assembled components.

…the model distills the essence of Italian culture and craftsmanship…

Meticulously hand-stitched detailing can be admired in the execution of the watch’s Cuoio Toscano calf leather strap. Produced in Tuscany, the strap is inspired by the lacing of Eilean’s sails. Thanks to its unique lateral stitching the leather strap is particularly hardwearing, ensuring it can withstand the rigorous conditions experienced out at sea. It secures firmly to the wrist using a patina’d steel buckle with an “Eilean”-embossed logo.
Without a shred of doubt, the design of the new Radiomir Eilean limited edition watch is one of integrity and beauty. With so many references to the famous yacht and its life across the seas, and it would be almost impossible to also see it as a celebration of Panerai’s maritime legacy. Suffice to say, this is a watch that distills the essence of Italian culture and craftsmanship — its design DNA imbued with all the integral features of a much-loved military instrument.