When I first put this watch on my wrist, I thought something misfired inside my brain. Of course, I tried to hide my confusion from my seasoned watch pro colleagues at Fratello HQ, but that lasted about three seconds. I think I shouted out loud, “what the hell is going on?” I saw the seconds hand moving counterclockwise, the “12” is a “0”, and although the “6” is in its usual spot, the “3” and the “9” had swapped places. Everything is turned around! At first glance, the Raketa Russian Code is an enigma squirreled inside a brain-melting riddle. How to read time? Could I crack the code?

I thought I got a Polar Watch out of the colorful Raketa box with Cyrillic letters and emblems recalling the former Soviet-Union. But boy was I wrong. The first thing I noticed when I put the watch from Saint-Petersburg on my wrist was not even the spectacle on the dial, it was the leather strap. Built to last is one way of describing it; far from supple is another one. I guess you have to break it in. Just like a wild Przewalski’s horse, the last surviving subspecies of wild horse, first described scientifically in the late 19th century by Russian explorer N. M. Przewalski. And just as Przewalski’s horses are smaller than most domestic horses, the 22mm wide strap on the Raketa is quite small in terms of length. My 18cm wrist is the max. If you have a bigger wrist the strap won’t reach the second keeper. 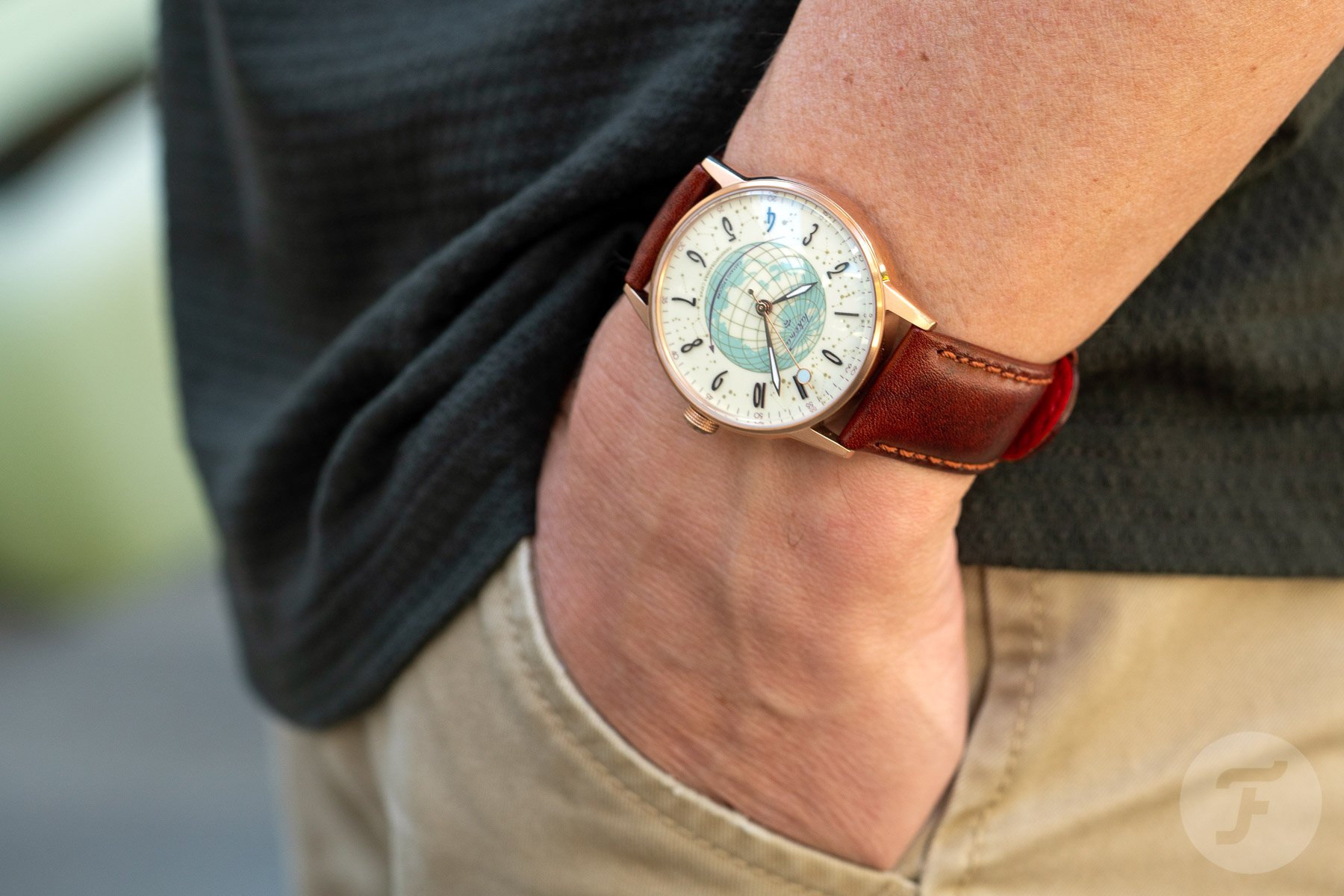 A revolutionary place of birth

After dealing with the strap, the real challenge commences. The action on the dial of the Raketa had me dazed and confused instantly. I thought I was looking at a watch in a state of disarray — a watch that produced mechanical chaos. Maybe even a watch that wanted to start a revolution. It is from Saint-Petersburg after all, the spot where, in December 1825, about 3,000 officers and soldiers refused to swear allegiance to the new tsar Nicholas I after the death of his brother Alexander I. Instead they proclaimed their loyalty to the idea of a Russian constitution and a constitutional monarchy. These men wanted more liberalism in an autocratic country and the abolishment of medieval serfdom. They paid dearly for their dreams. Their armed revolt was crushed, and the surviving rebels exiled to Siberia. And tsar Nicholas I wanted nothing to do with change and modernization. 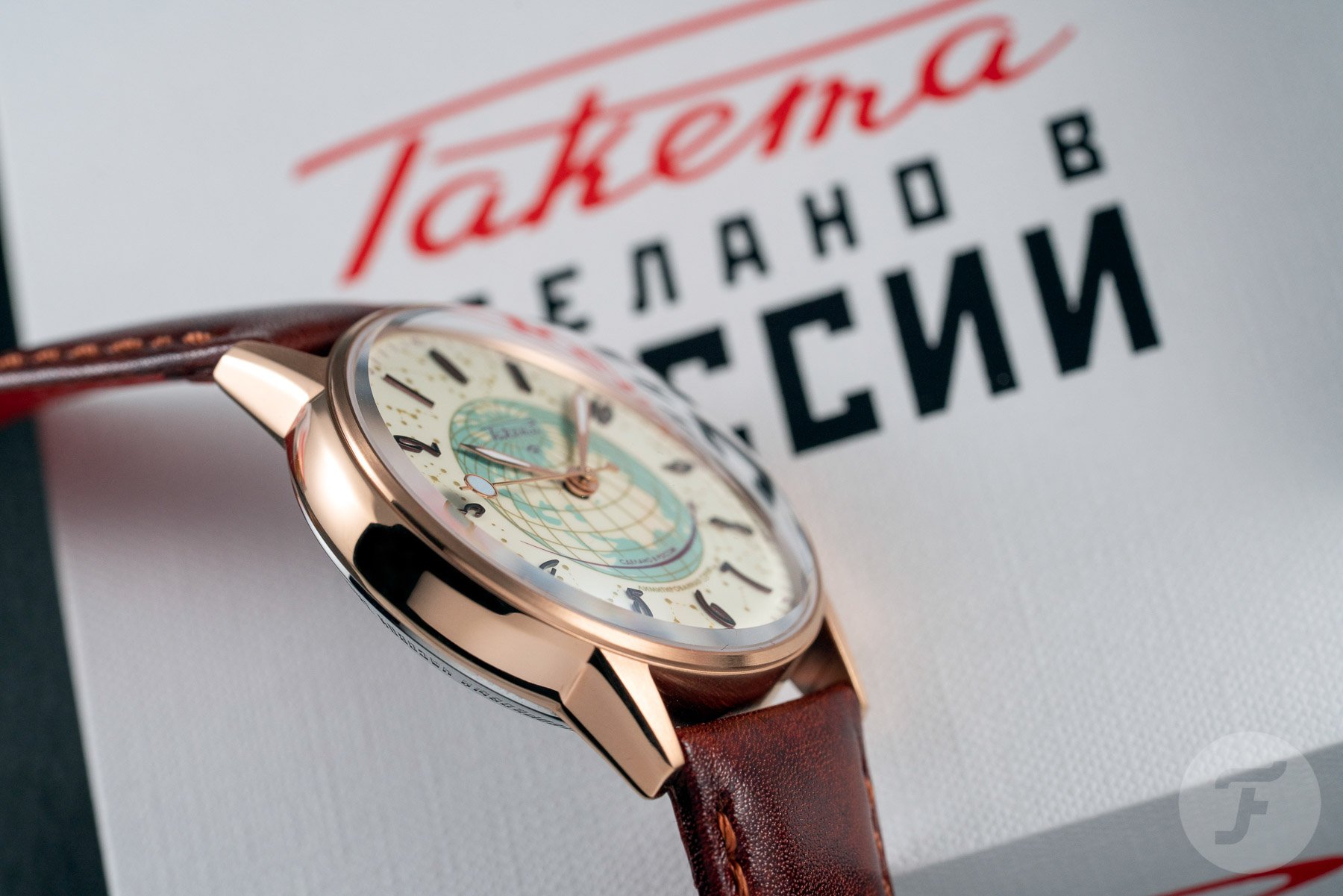 The Raketa Russian Code doesn’t dream of a military uprising. But this enigmatic watch seems to want to start a micro revolution that could turn into something much bigger: all clocks and watches in the world running counterclockwise! Since humans are creatures of habit, that will take time and conviction. That’s why the Raketa Russian Code is on the barricades in its most handsome outfit. And that is a 40.5mm case in steel PVD rose gold with a length of 45mm. The watch shows a dial picturing the globe in soft colors, you could call early Cold-War-style. Pleasing on the eye, a touch exotic, but nothing too bewildering.

But this watch isn’t about earthly matters, it’s about moving in harmony with the movement of planets. And because the Earth and all the other planets turn in a counterclockwise direction around the Sun, watches need to be adjusted to that, according to Raketa. The cosmic revolution starts small. The limited edition of 300 Raketa Russian Code watches will find their way to avant-gardists, trendsetters, and other non-conformists to pave the path for anticlockwise time. 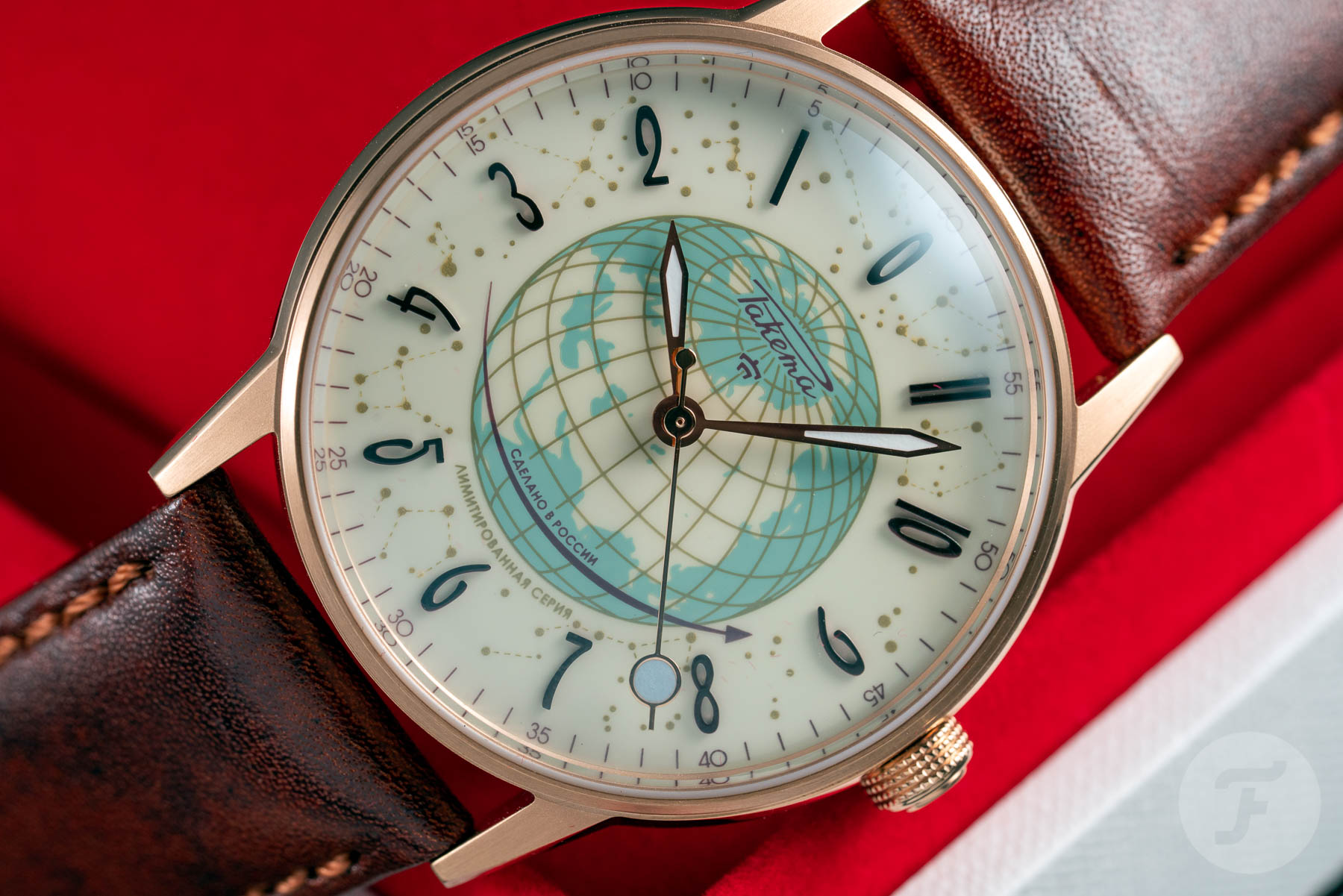 Am I ready for the anticlockwise revolution? Nah, I don’t think so. I don’t have a problem with a touch of Soviet styled design on the dial — my vintage 24-hour Poljot has that too. And I also like the overall spherical shape of the 16.55mm thick watch. The thick domed glass over the dial and hands with Super-LumiNova create a spherical effect I’m going to call cosmic. You get the sense of the moon turning around the earth — the soft grayish light blue round tip of the seconds hand represents the moon – from west to east. 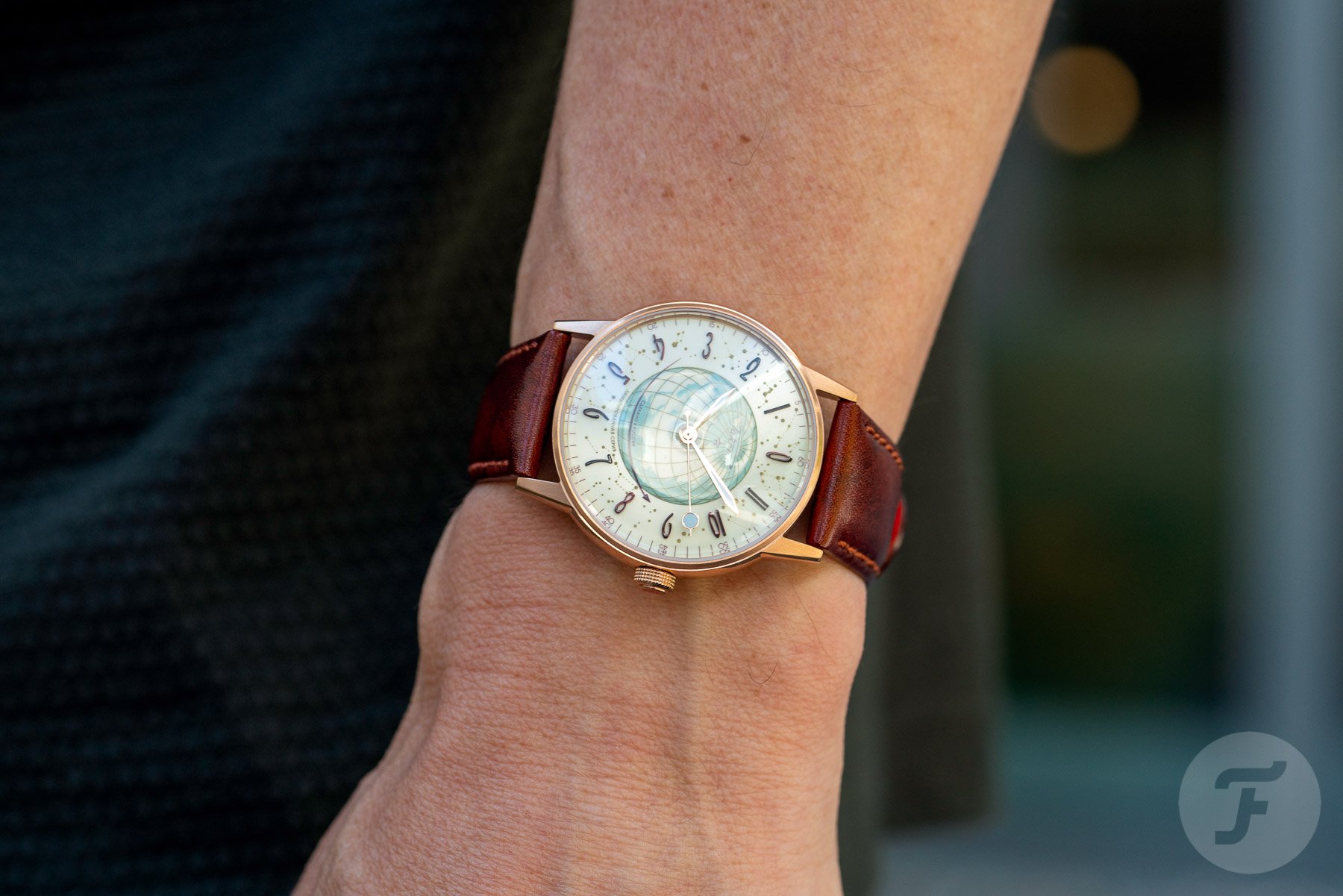 And although that’s a cool idea and exactly like it is in reality, it doesn’t really help you in reading the time intuitively. That could perhaps happen over time, but I don’t have that much time to spend with the Raketa Russian Code, so for me my practical experiences with this watch remained confusing throughout the test period. 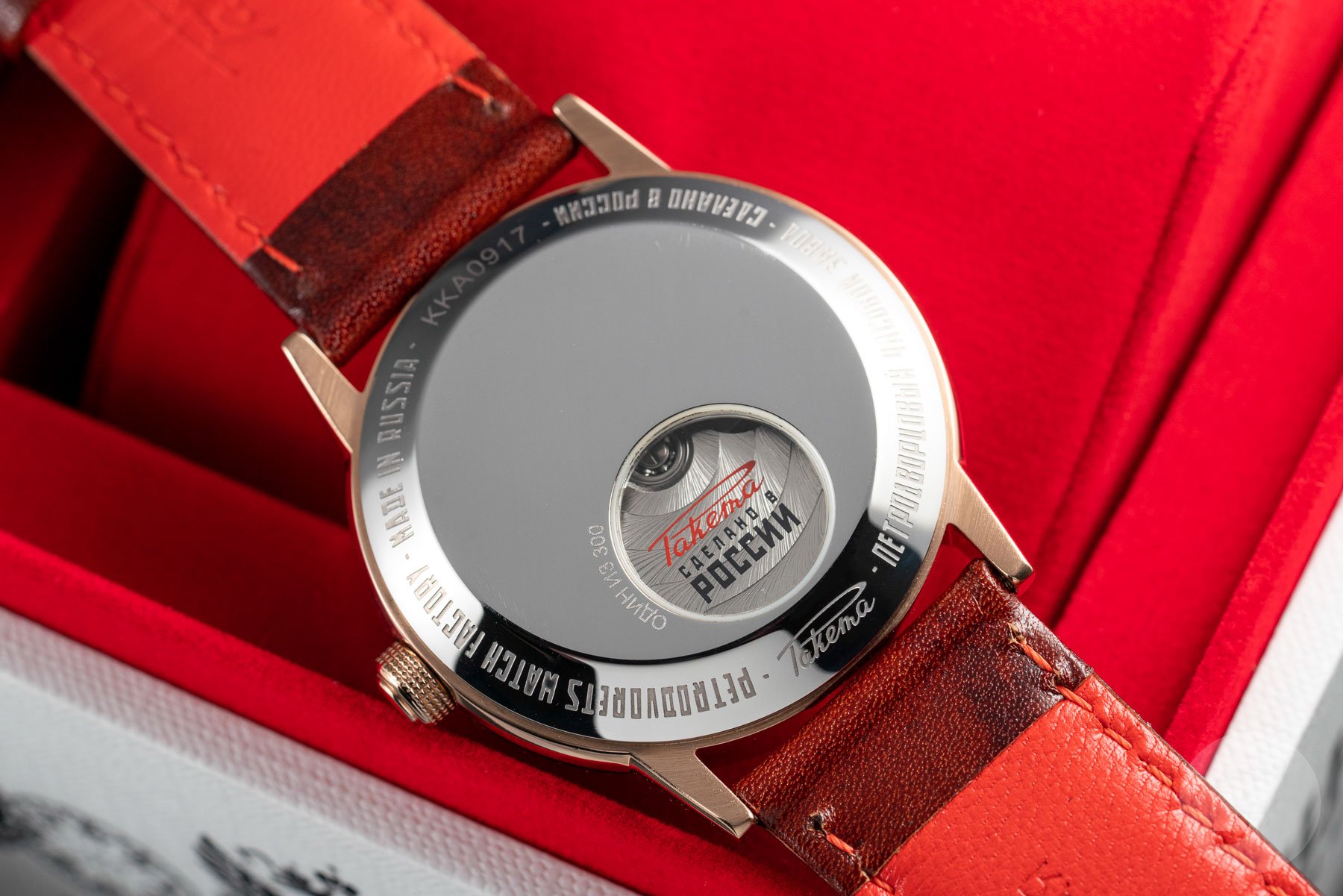 To make the hands move anticlockwise, watchmakers in the Raketa Watch Factory built the automatic movement No. 2615R. The in-house movement is visible through a small porthole in the case back. What is very hard to see is that the rotor of the 24-jewel movement, with a power reserve of 40 hours, is decorated by hand with so-called Neva waves. Everything moves in the opposite direction, so if you wind the movement manually, you have to turn the crown towards you. And setting the time also goes the other way around. 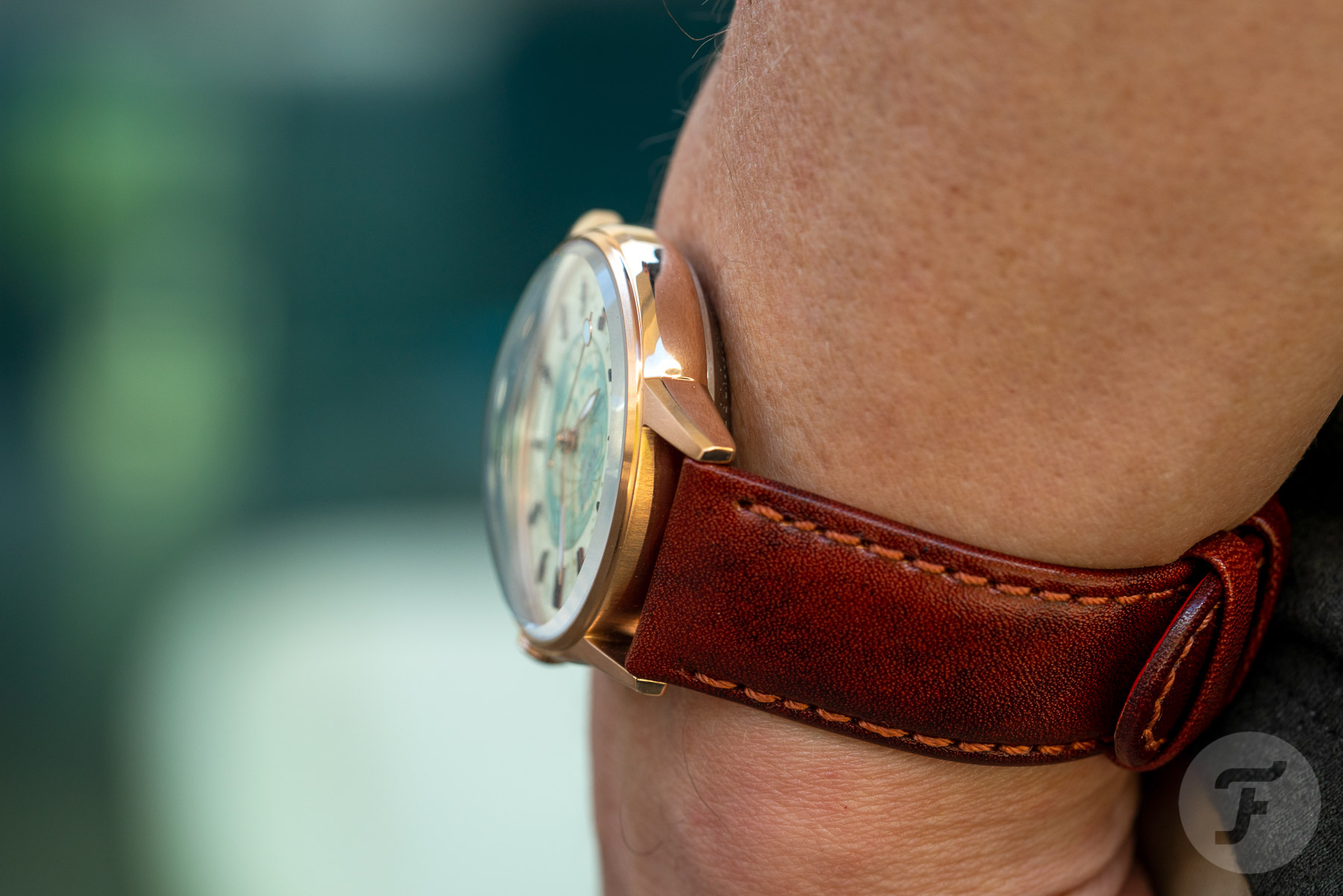 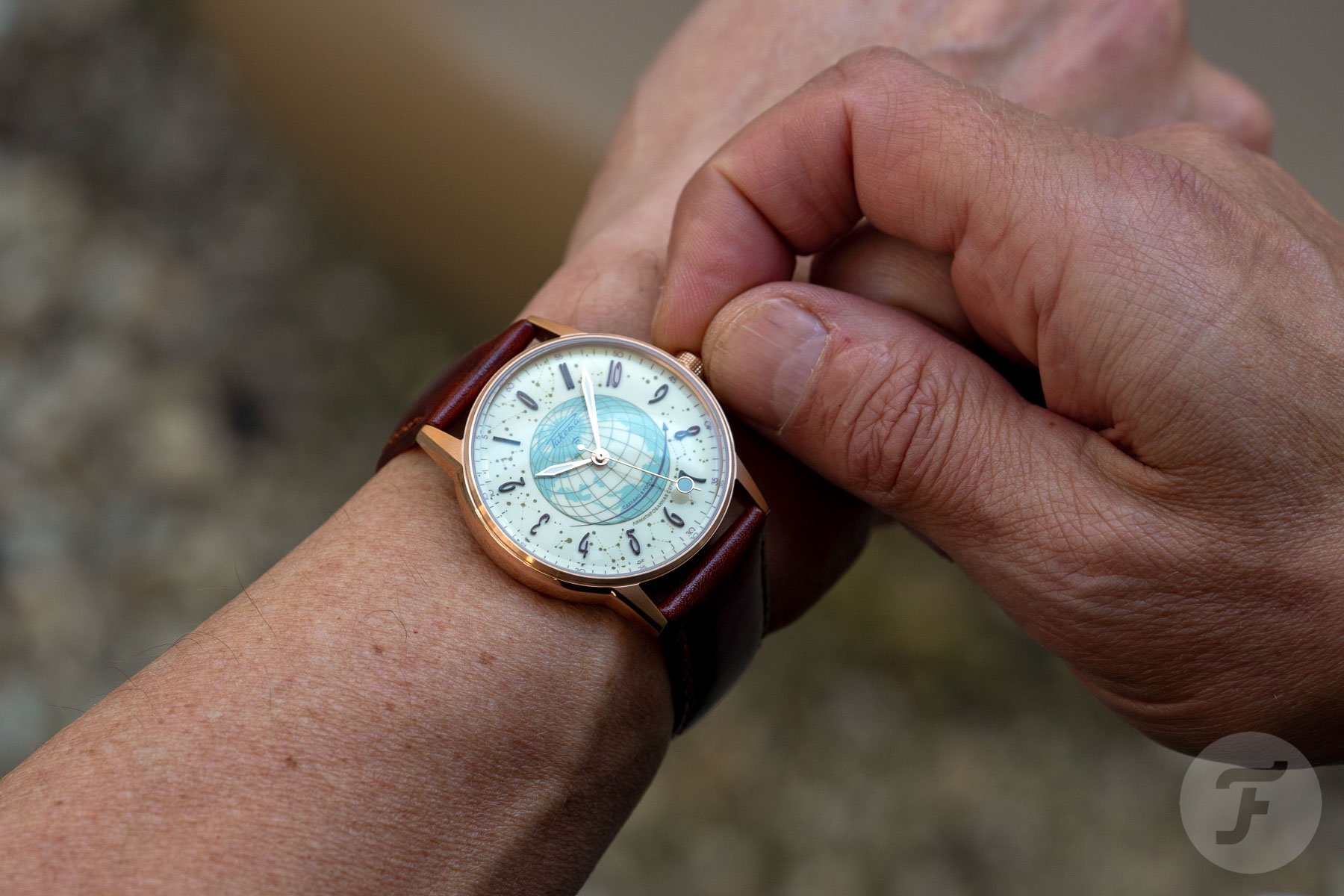 The Raketa Russian Code is an enigma inside a brain melting riddle: did I crack it?

I have to be honest, I didn’t crack the Russian Code; it cracked me. When I looked at the dial to read the time, time stopped. Why? Because my brain froze. The cogs in my head ground to a halt while I noticed the seconds hand move in the “wrong” direction. I then had to reboot by looking at my phone or laptop to read the time digitally. As a gimmick, it works, and I’m sure there are people who can’t wait to spread the word of this watch to anyone who wants to hear it. But I just felt confused. That’s not a feeling I eagerlywanted to share. 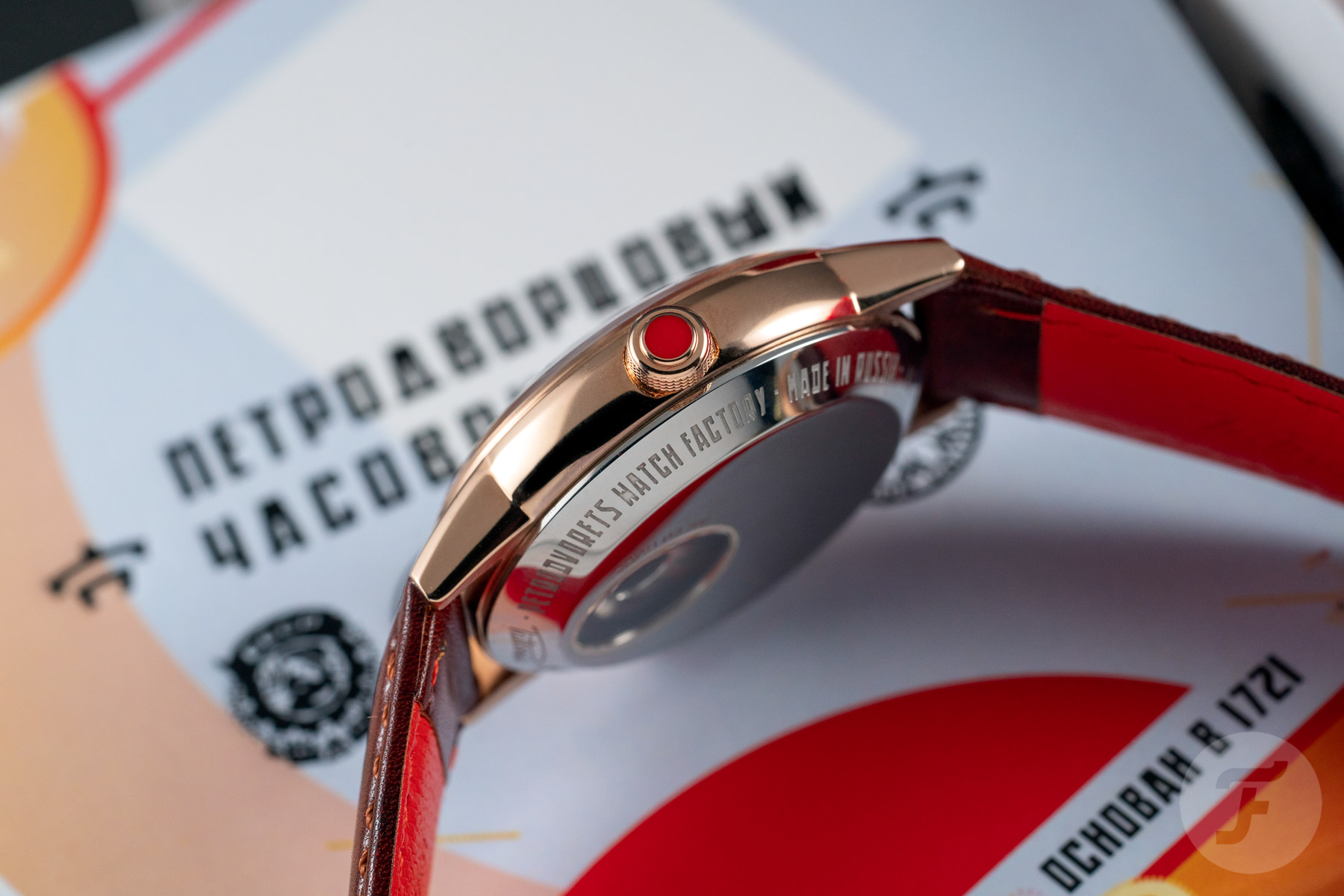 For €1,380 you buy a limited edition watch with a distinct Russian style and an original philosophy. It might not be for me, it might not be for anybody, but since there’s only 300 Russian Code watches in this rose gold color, it doesn’t need to be. If you want to help kick-start the anticlockwise revolution Raketa is starting, please visit the brand’s official website first.