All kneel! Let’s celebrate the return of the King, AKA The Casio G-Shock GXW-56-1AER. And he’s better than ever. To keep up with the times, the King now packs Multi-Band 6 for automatic radio time syncing. And although he’s classified as a “Classic” by Casio, the King is also Tough Solar-powered — old-fashioned batteries be gone! The generous dimensions of this full digital watch remain the same and justify the nickname the “King of G-Shock”.

The GX-56-1AER is dead, long live the GXW-56-1AER! One letter makes all the difference. The extra “W” means that the King of G-Shock has re-invented itself to stay on the throne for years to come. The king ditched the battery and got himself some Multi-Band 6, so he won’t miss a second during his renewed reign. The looks are largely unchanged and that’s a good thing, because a royal nickname is something you want to cherish, nurture, and cultivate.

How to spot the difference between a GX-56-1AER and a GXW-56-1AER? Well, the old king has a silver buckle and the King 2.0 has a black buckle to match his black and red attire. It’s a small esthetical update to subtly underline the big internal changes of his digital majesty. The Extra Large Series GX-56 was first launched in 2010 and soon became a favorite. The “X” in the name stands for extra; extra in everything. G-Shock fans who like it large gave the series its regal nickname King of G-Shock. Strangely enough, in 2013 the GX-56 was discontinued. Luckily, the King returns, and he’s in better shape than ever. 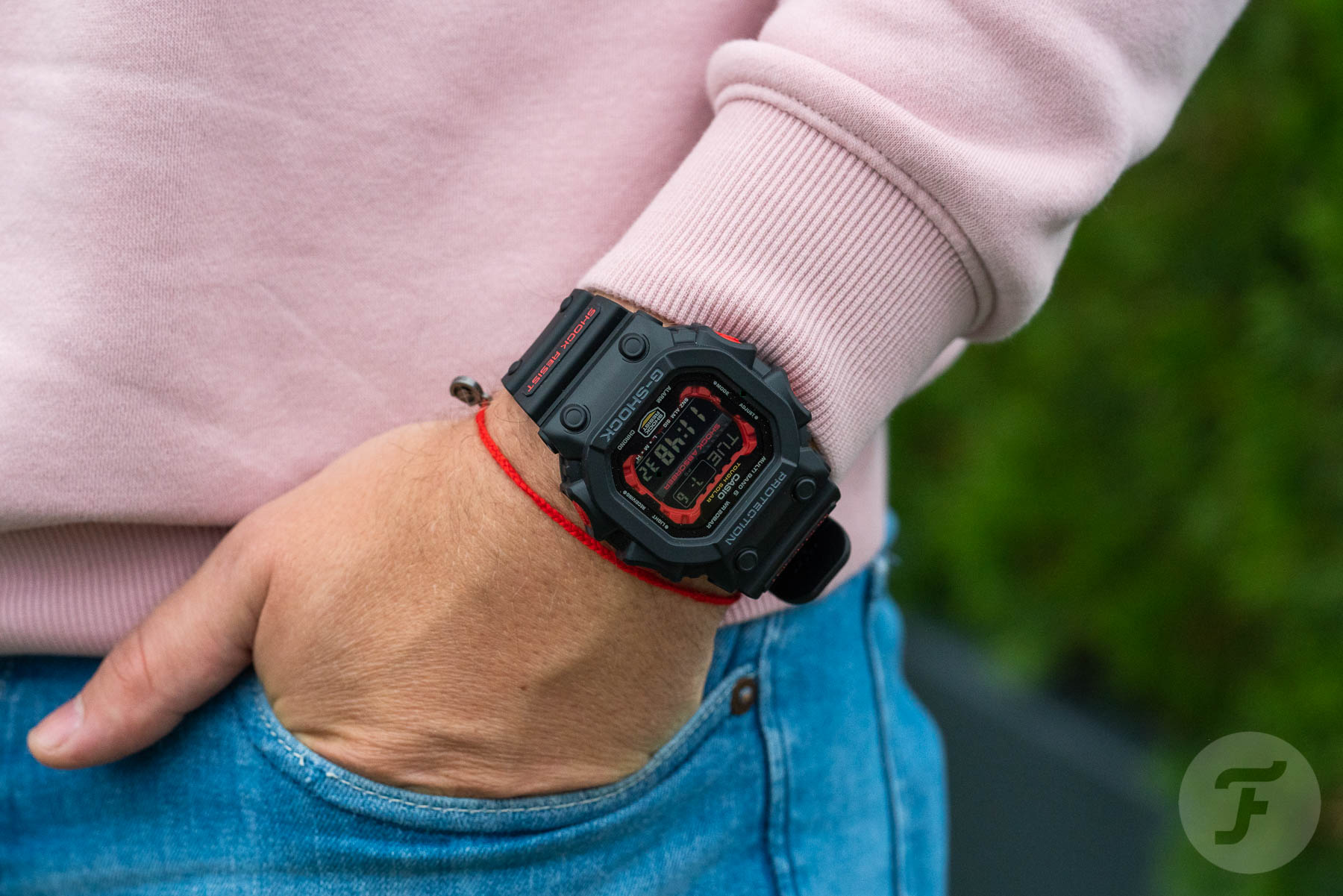 An XL with the weight of an M

How do you know you’re a match with the King? You have to look at it this way. If you like the design of the traditional square, but the DW-5600, feels a bit too small, the King might be the watch for you. But you also have to keep in mind that it really is an XXL watch – Casio might have named it XL, it really is a size up. The GXW-56-1AER measures 55.5×53.6mm and has a height of 17.5mm. The middle-of-the-road weight of 88 grams is nothing to worry about, it’s the immense dimensions that need to be taken into consideration.

This is a watch you wear with a T-shirt, a polo, or the sleeves of your shirt rolled up.

And forget about putting the watch under a cuff. This is a watch you wear with a T-shirt, a polo, or the sleeves of your shirt rolled up. And if you’re used to big G-Shocks you know the combination of case shape and case back, and a sturdy but smooth resin strap, wears well. When things get sticky and sweaty on a hot day, a quick rinse is all it takes to freshen up the watch and its wearer. 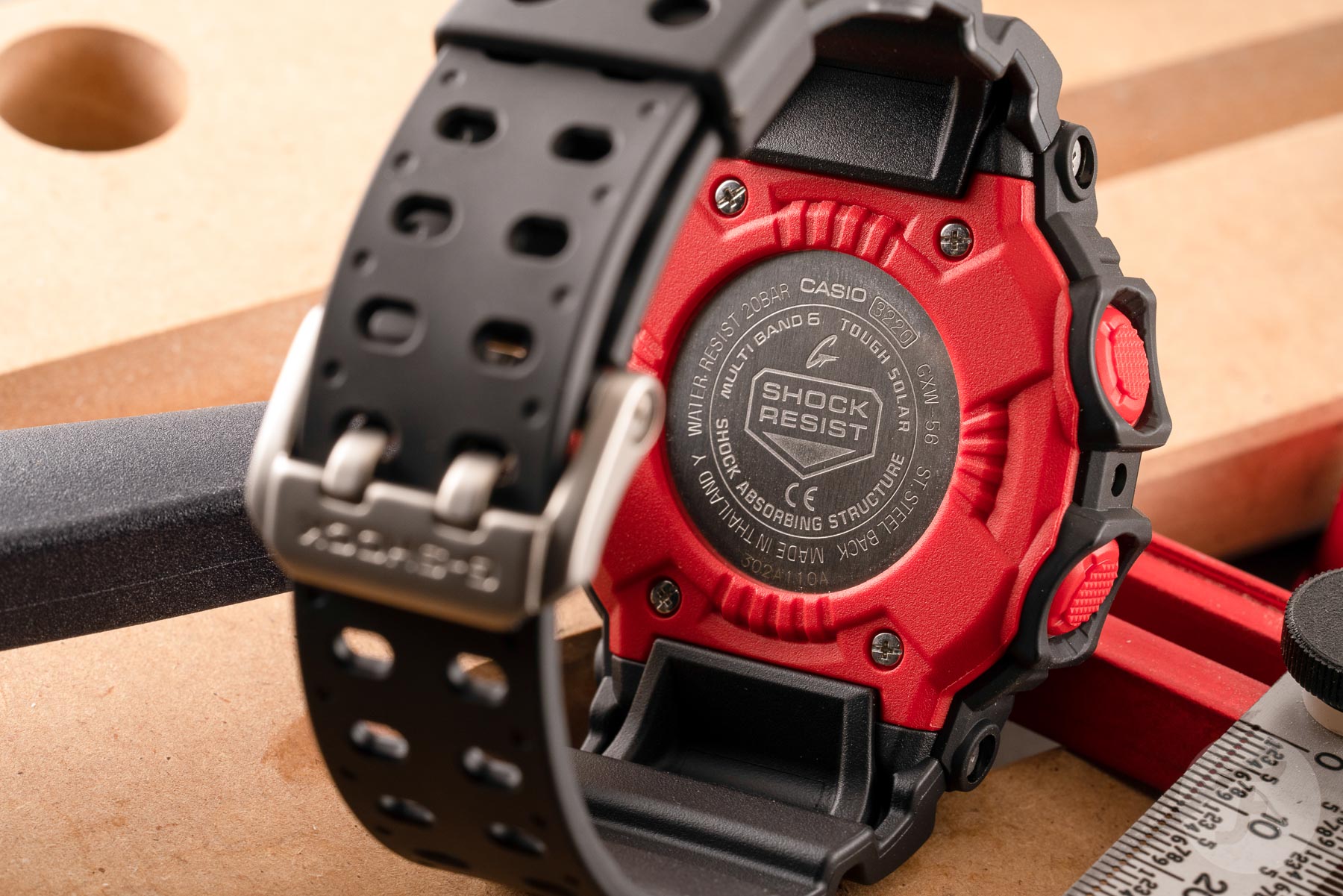 It’s clear to see that the GXW-56-1AER takes its design cues from the DW-5600. And then starts to multiply everything — it’s almost a 120% square, but it also shows some different shapes and details. You can’t wear the black and red GXW-56-1AER discretely, as I stated earlier, because of its size. And also because of its prominent color scheme. The black and red will get noticed on your wrist – have you seen the red pushers that pop out like an alarm went off? What might be a bit less easy to notice, or read, I actually have to say, is the negative display. It looks cool, it looks better than a positive display, but when it comes to quick and easy readability, the dark screen, however large it may be, is not the most intuitive. 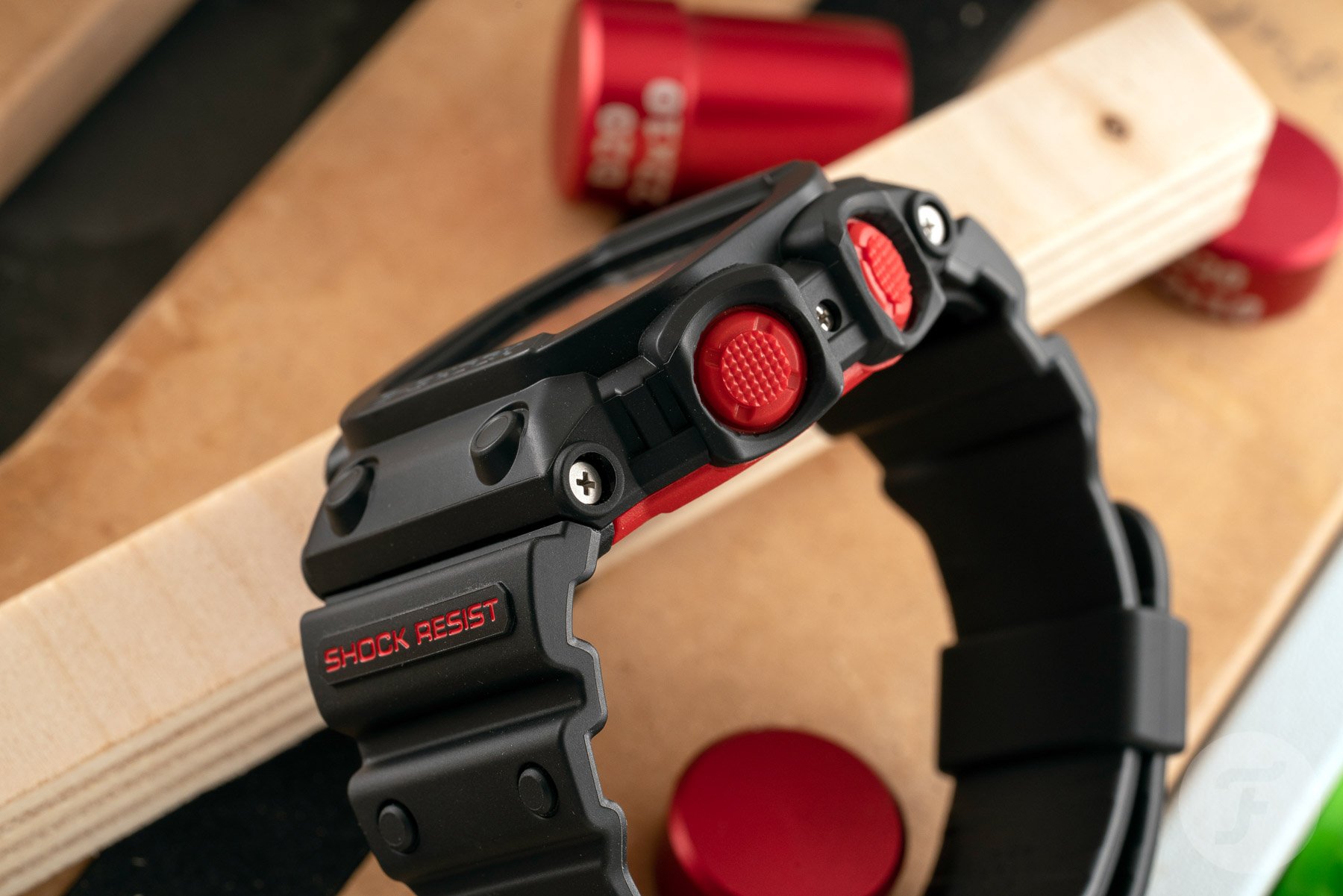 Talking about the screen, the negative LCD shows a with chronograph, perpetual calendar, world time, countdown timer, and alarm. And if you want to light-up the negative display, you can press the top right pusher to activate the high intensity EL backlight.

Color coordinating your new GXW-56-1AER with a pair of ASICS sneakers is not just a good idea fashion wise, but also materially correct.

Something you don’t see, but helps to keep the watch running in times of shocking stress, is the α-gel shock absorber around the movement. The GX-56 models were the first G-Shock models that used α-gel, a material that Japanese brand ASICS also uses in its GEL-Lyte running shoes. The “X” in the name refers to the large size of the watch, but also to its extra resistance to shocks. Color coordinating your new GXW-56-1AER with a pair of ASICS sneakers is not just a good idea fashion wise, but also materially correct. The red α-gel shock Casio uses, at four points inside the King, is visible around the display. 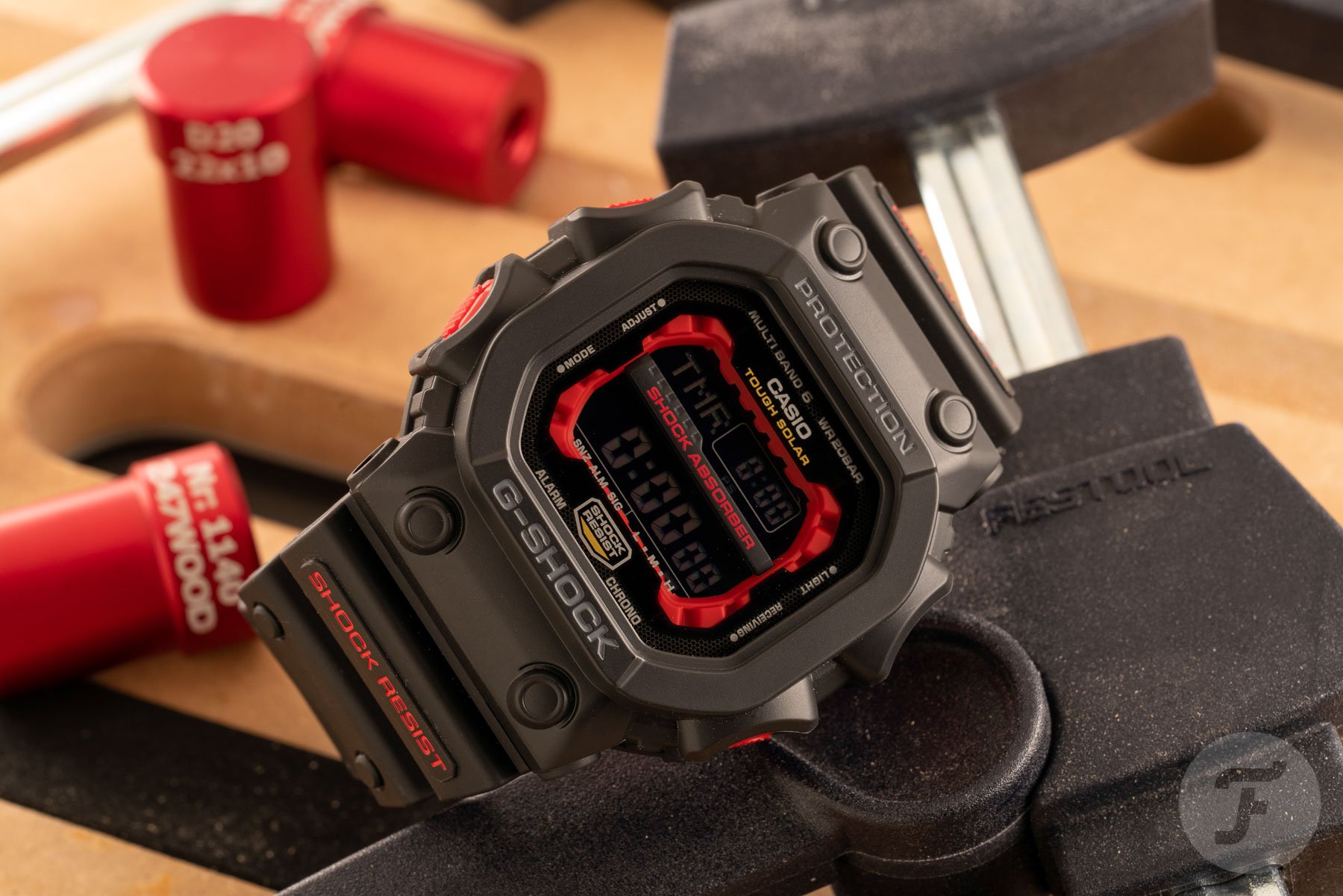 Throwing mud and water at the King Of G-Shock

The Mud Resistant two-layer bezel made of resin covers the King Of G-Shock. The large bezel keeps the display free from scratches and also protects the parts of the pushers form dust and sand. The material used for the red pushers is notably softer than the protective resin that surrounds them. The size makes them very easy to operate, another advantage of the XL King. 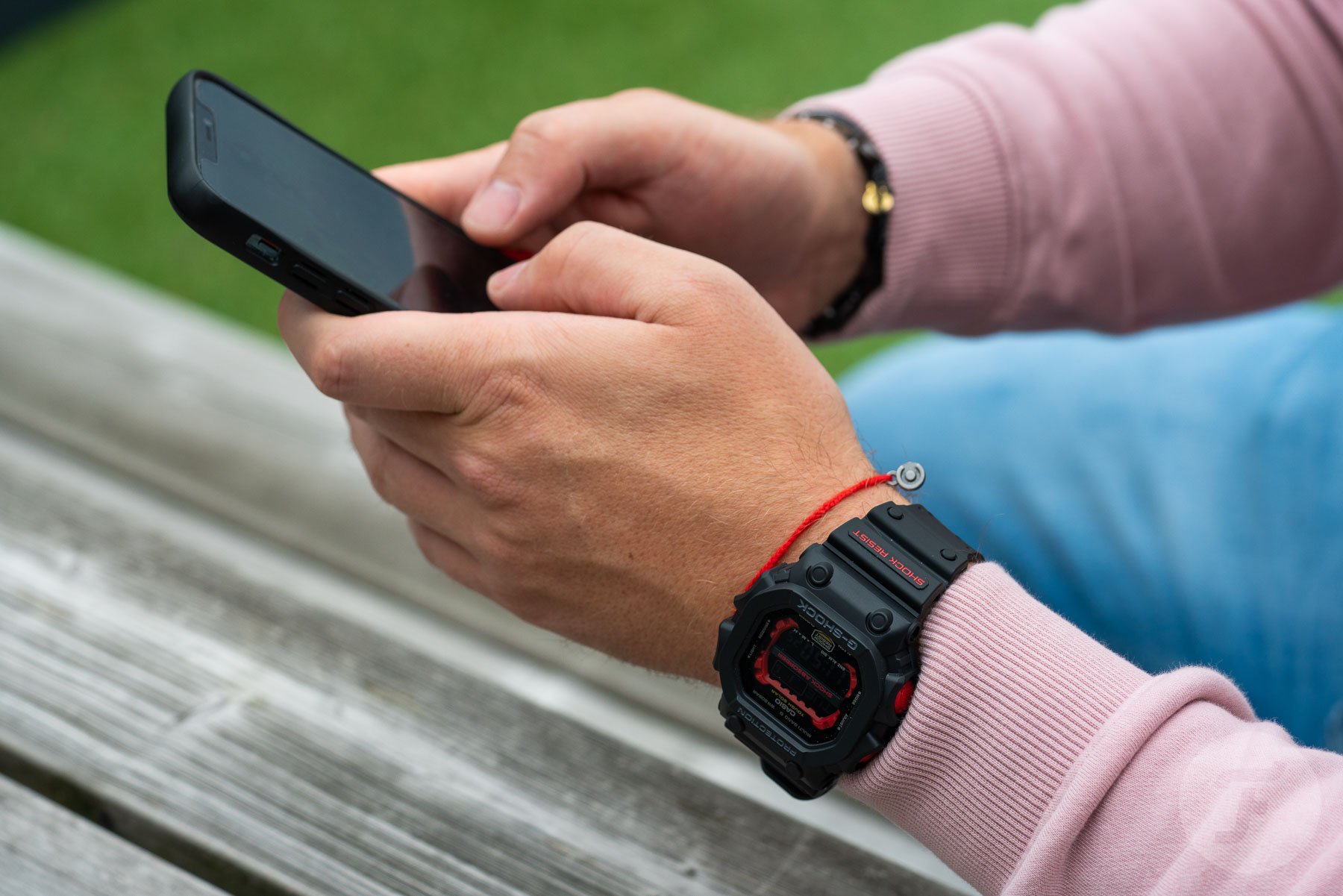 Water also doesn’t hurt the watch that is water resistant to 200m – according to ISO 22810. The Casio G-Shock GXW-56-1AER can withstand (almost) as much abuse as a Mudmaster or Frogman, but with a price of €189, it reaches out to a larger audience. 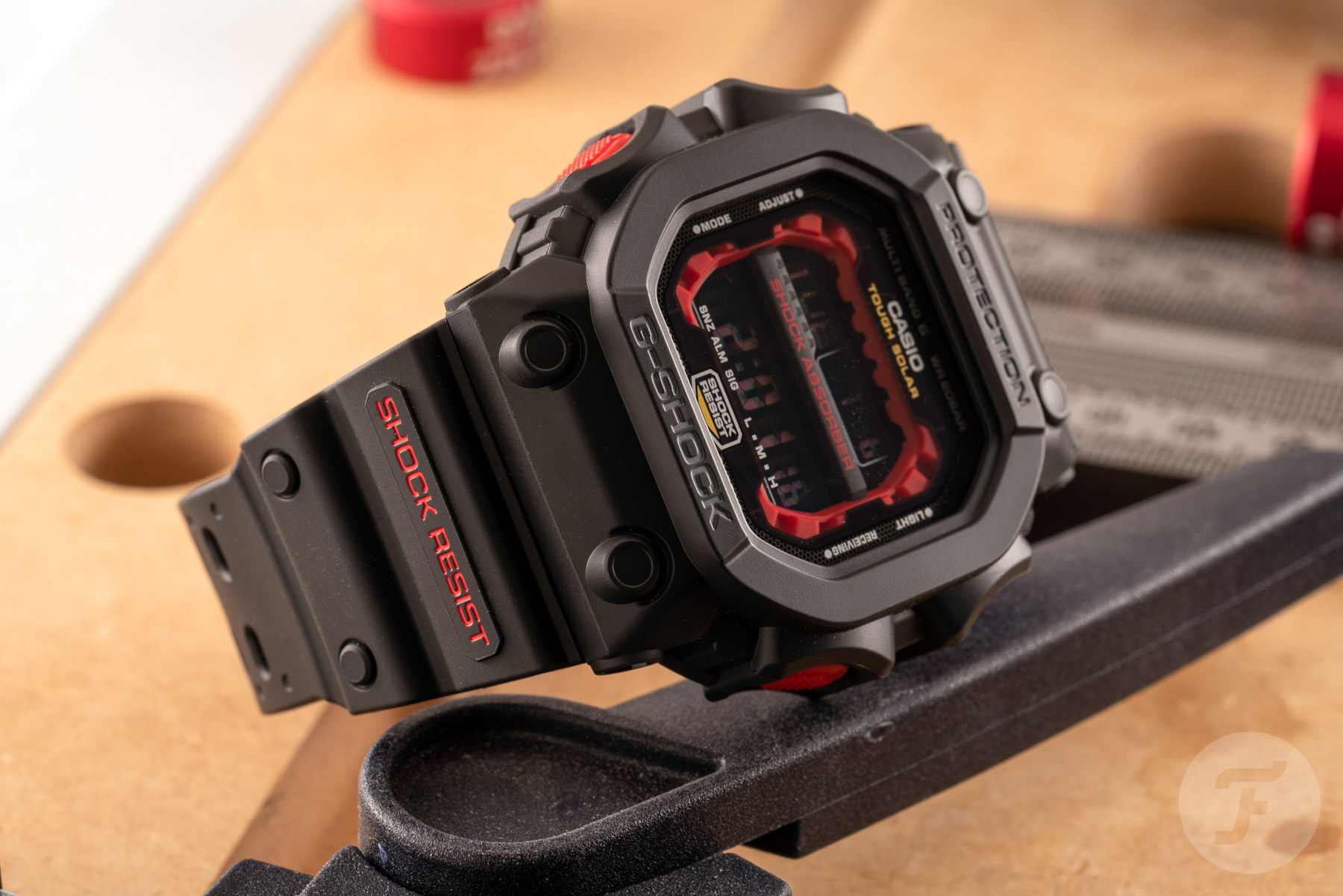 Find out more info about the Casio G-Shock GXW-56-1AER on the official website.

Hot Topics
RJ’s Top Five Alternatives To The Omega Speedmaster Professional
96 comments
We Need Luxury Solar-Powered Quartz Watches From Rolex, Omega, Breitling, And Grand Seiko
84 comments
The Omega Speedmaster On The Big Screen — Watch Spotting At The Movies
69 comments
Above And Beyond: When And Why Paying Over Retail For A Watch Makes Sense
63 comments
The King Seiko Collection Debuts With Incredibly Wearable Watches
56 comments
Popular
Rolex Submariner Hulk versus Seiko SLA019 : Shades of Green
Michael Stockton
23
You Asked Us: Rolex or Tudor
Gerard Nijenbrinks
7
Hands-On: Breitling Navitimer 1 B01 Chronograph In 43mm
Robert-Jan Broer
0