This Week in Watches For All Your News
Michael Stockton
comments ...
Share

So, I’ve roughly counted it and I’ve done something like 30 flights over the last 60 days.  I’m kind of happy to be back at home while I write this despite returning to heat that just doesn’t belong in a country that finds air conditioning unhealthy.  What the hell is up with that backwoods medical witchery?  Freeze me out and turn me blue!  This week was eventful as I had the opportunity to take in the Omega Seamaster Planet Ocean Ultra Deep press release.  It was fantastic and my transit was easy thanks to the good folks at Omega and the gem that is London City airport.  I’ll come back in a future article on the Ultra Deep that will give you a “deeper” look at the watch, but we’re here today to talk about other things on This Week in Watches. 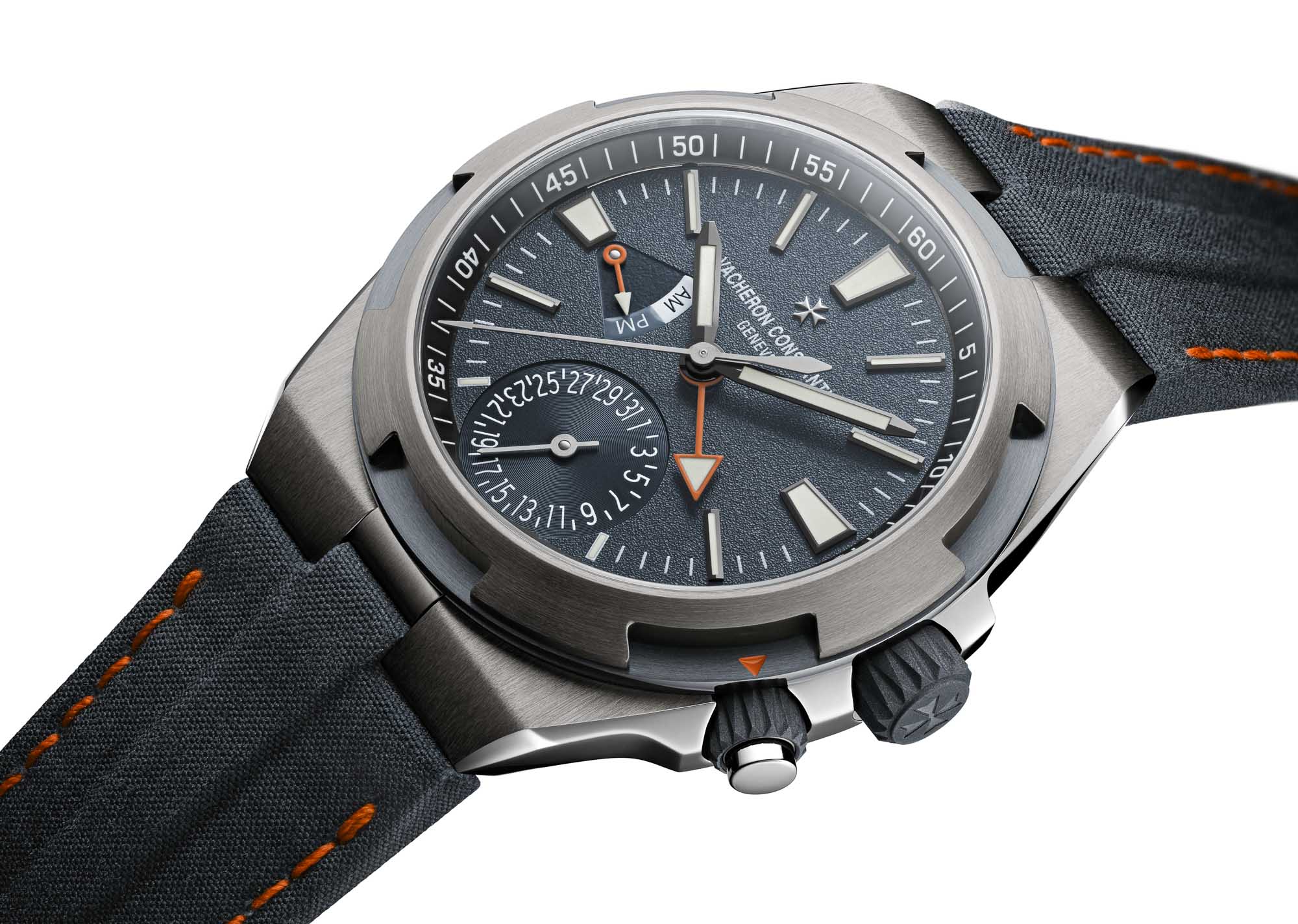 Vacheron Produces a Prototype for Everest

Heights and depths seem to be a thing this week and Vacheron went with the former when it showed off a prototype dual time Overseas made for photographer and explorer Cory Richards.  Richards attempted a summiting of Everest earlier this year, but the weather unfortunately just wouldn’t have it.  He made it to just shy of 25,000 feet (that’s about 4,000 shy of the summit) and all without supplemental oxygen when things turned nasty.  Vacheron Constantin outfitted Cory with a 41mm dual time Overseas prototype to help him keep track of the time in both Nepal and the USA.  The case is made of titanium, but is reinforced with tantalum – a material we’ve seen before and happen to like.  A rather amazing 22k rotor is fitted and features an inscription of Everest. 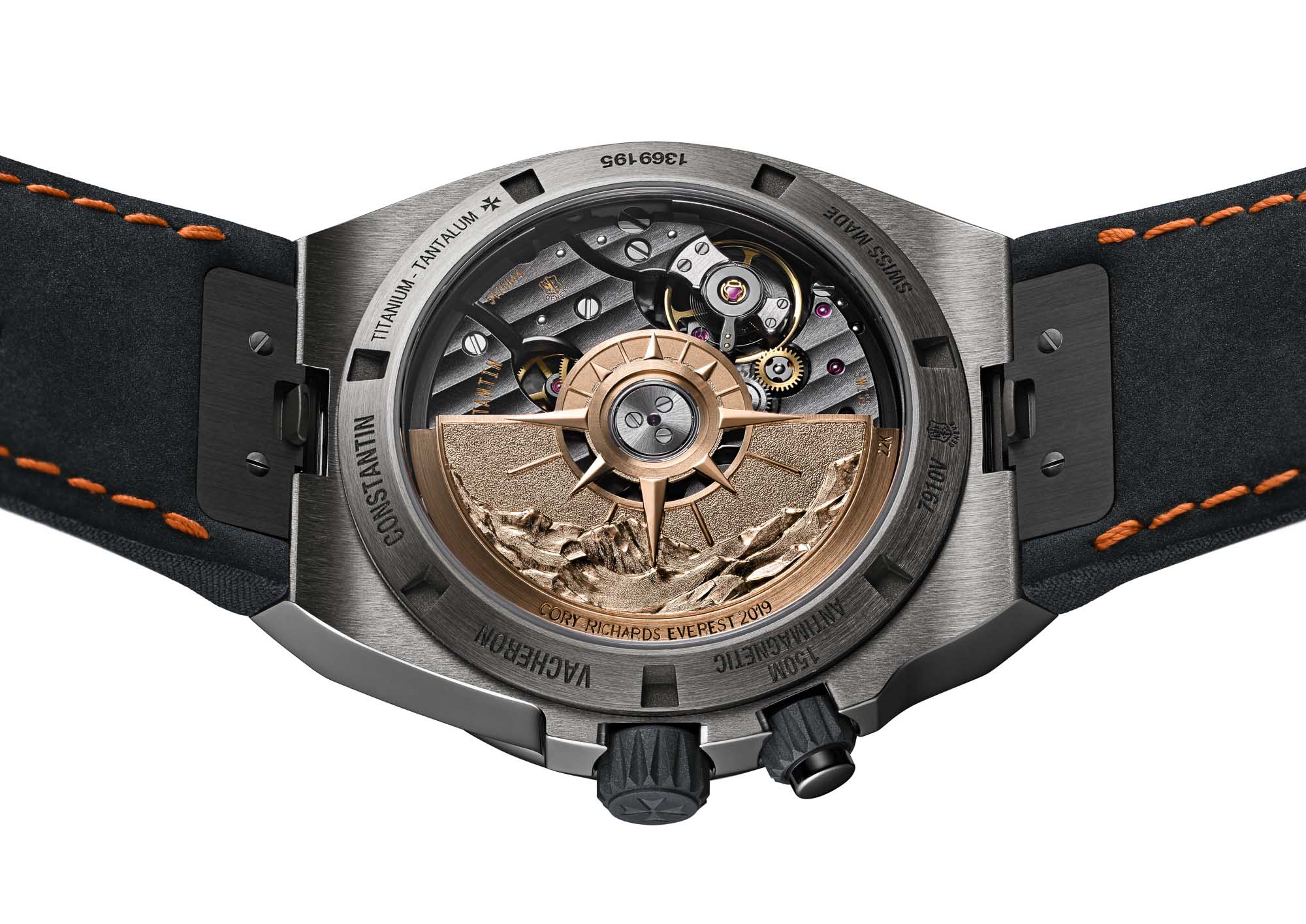 An in-house automatic (cal 5110 DT) powers the watch and the dual time zone is set with the crown and that pusher at 4:00 synchronizes the date with local time.  Let’s hope that this watch shows up in a production version as it’s definitely a bit more sporty than the current Overseas collection.  I didn’t see anything regarding this watch on the Vacheron site, but feel free to keep checking for more info. 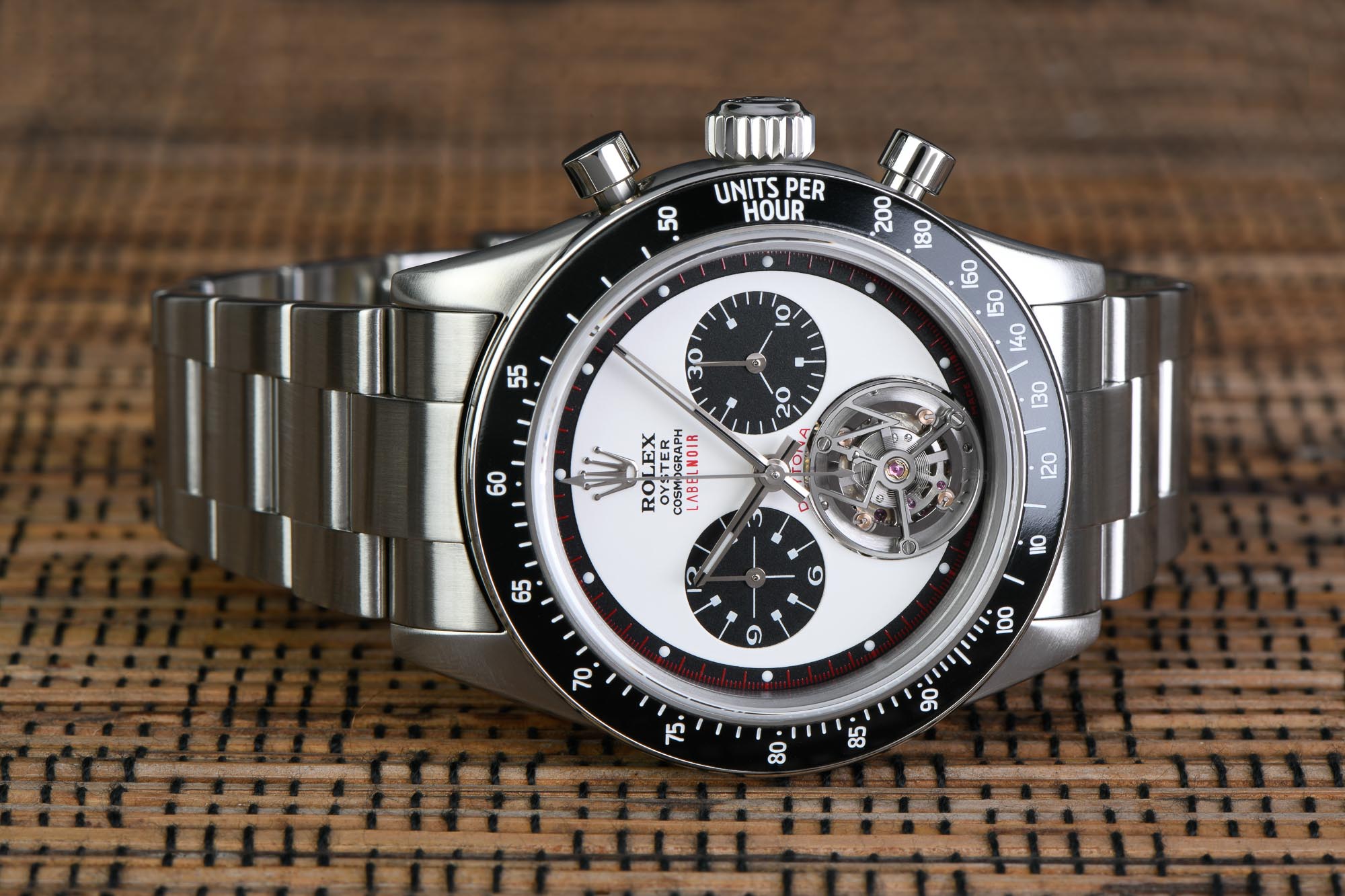 Label Noir and a Dayton Tourbillon

If you thought finding a stainless Rolex Daytona was difficult, one anonymous (and well-heeled) customer decided having one simply wasn’t unique enough for him.  So, he went all the way and decided to ask the high end watch customizer, Label Noir, to create something truly special.  The request was for a tourbillon Daytona and one that brings in the looks of the famous Paul Newman.  Based on the last generation (steel bezel) 116520, the watch now has a tourbillon in place of where the small seconds once occupied real estate.  61 pieces were removed from the Rolex 4130 caliber and 93 new components were added for the tourbillon.  Additionally, the frequency was changed to 21,600 bph in order to drive the tourbillon.  You can also see that some extensive case work was done to remove those dreaded crown guards.  The price?  Don’t ask as this was a 1 of 1, but it will be on display in Geneva, Paris, St. Tropez, and Monaco (French Canada is feeling left out).  I think it does show off Label Noir’s talents quite well, though.  For more on the brand, head to Label Noir’s official website. 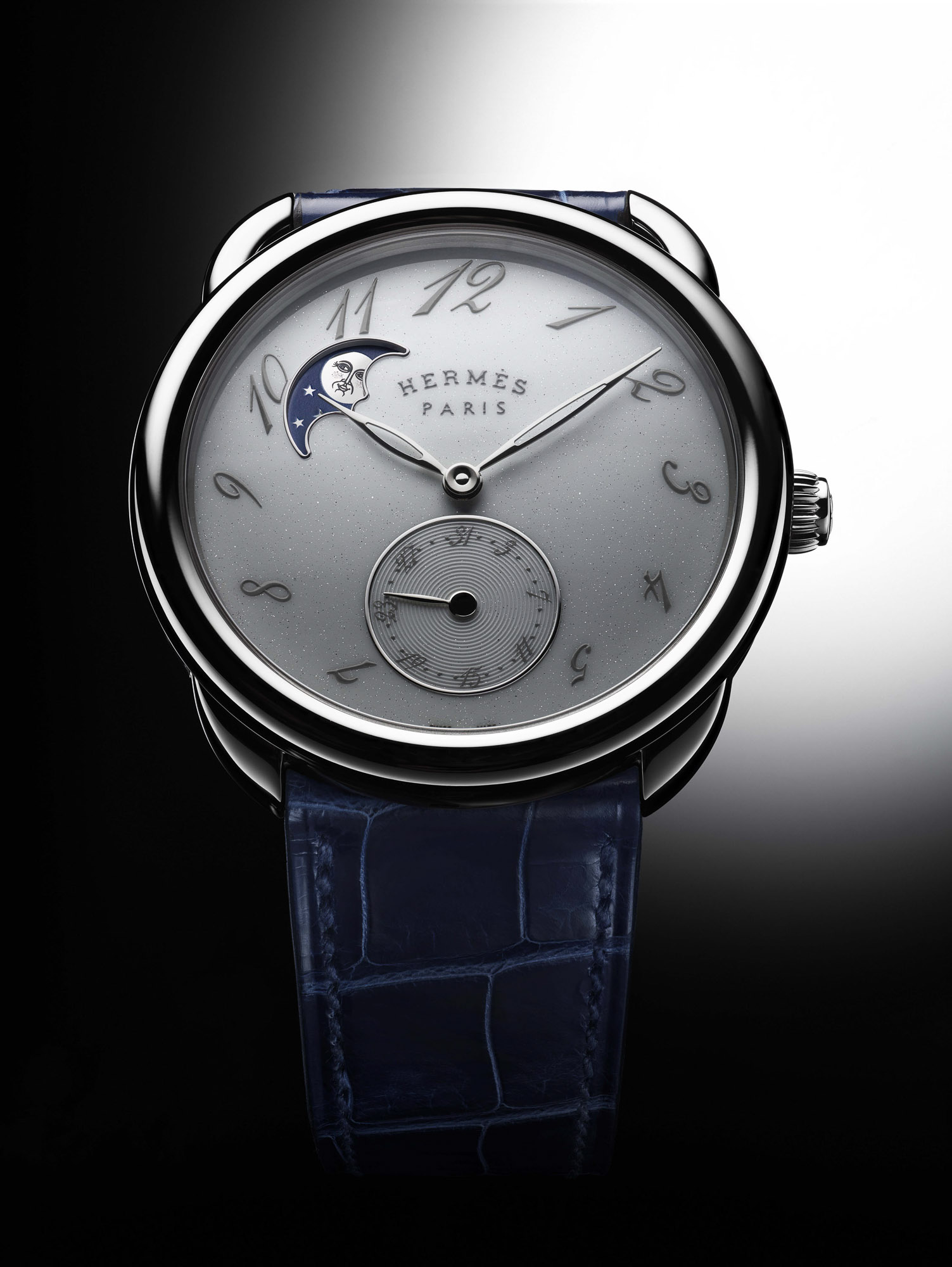 I rarely wear a tie, but I do have a penchant for Hermès ties.  The equestrian-themed and patterned pieces do it for me and I find that the brand really knows its way around the color wheel.  On the flip side, I could do without those “H” belts that seem to be the calling card of the Schickeria that invade the Aperol Spritz and Hugo-infused lounges of both the Fatherland and Mallorca.  Sigh…  But, did you know that Hermès works its magic on the bench in the form of mechanical watches?  Of course you did.  Today, we have the new Arceau Petite Lune in 38mm and stainless steel.  While the case shape has been in existence since 1978, this edition adds a moon phase complication at 10:30.  One variant comes with 70 diamonds on the bezel and one goes without.  Hermès doesn’t exactly call out whether these are intended for men or women, but with a host of alligator strap hues to choose from, I suppose these pieces could work for either sex.  We have a white dial with black Arabic numerals, and open-worked rhodium hands.  Inside, the in-house H1837 automatic goes to work.  These watches look amazing and that dial – damn. (pics by the way are courtesy of Hèrmes) Unfortunately, pricing wasn’t included, but if you’re a fan, you can likely get a ballpark idea by looking at the rest of the Arceau lineup.  Head to Hermès for more information – consider rolling past the “H” belt, bitte.  🙂 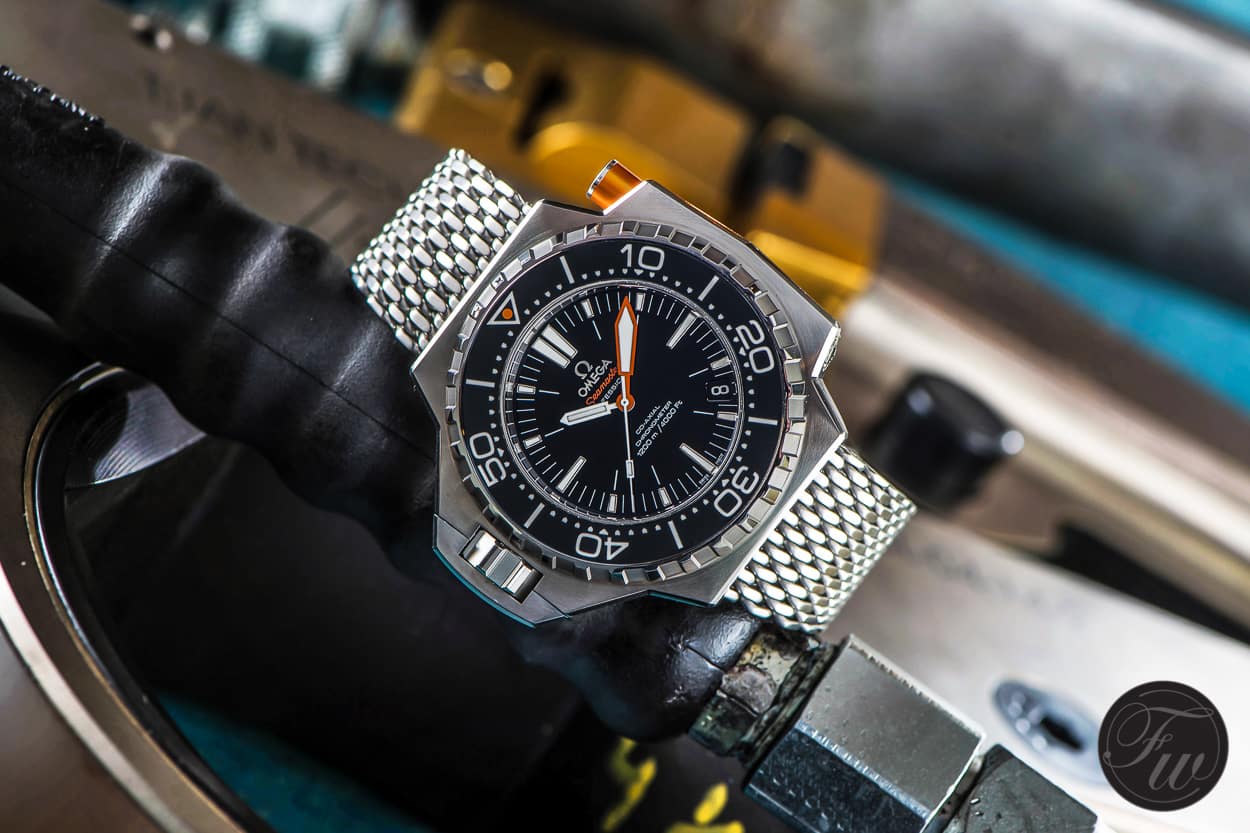 We received word from the folks at Omega that the steel Seamaster Ploprof 1200M has gone the way of the dodo and thought it was worth a share on This Week in Watches.  While it’s rarely discussed today, the current Ploprof has been around since 2009 and is available in a number of variants.  Titanium, though, seems to be the most popular due to the watch’s imposing size, but steel is considered most in keeping with the original Ploprof 600 from the 1970’s.  That crafty RJ snuck in and recently acquired a new steel 1200M and I’m sure we’ll get to see it more soon.  While the modern Ploprof uses a screw-back in lieu of the original’s monobloc and adds a helium valve, it’s one serious piece of kit and the reissue was an important part of Omega’s renaissance.  And, for those who have never tried on a Ploprof, you should.  They somehow fit the wrist far better than you’d imagine.  The steel Ploprof 1200 was a true tool watch made for professionals and enthusiasts – we’ll pour one out in its memory.  Omega still shows the steelie on its website, so I’m sure they’ll still be in stores until they’re all sold.

Team, that’s all for This Week in Watches.  We’ll be back next week with more…enjoy the weekend.