Goedendag, this is The Week in Watches for September 28th, 2019. It has been a busy week, for a lot of brands, so here we go.

The brands picked up the pace again in September, with new releases from big brands and some smaller brands. We saw several beautiful and important releases this week that we didn’t get to cover in separate articles this week. Without further ado, here are some of the releases you shouldn’t miss.

The young Hublot company (1980) collaborates with a lot of different initiatives, from Ferrari to Berluti to Orlinski and a lot of others. And now with SORAI. 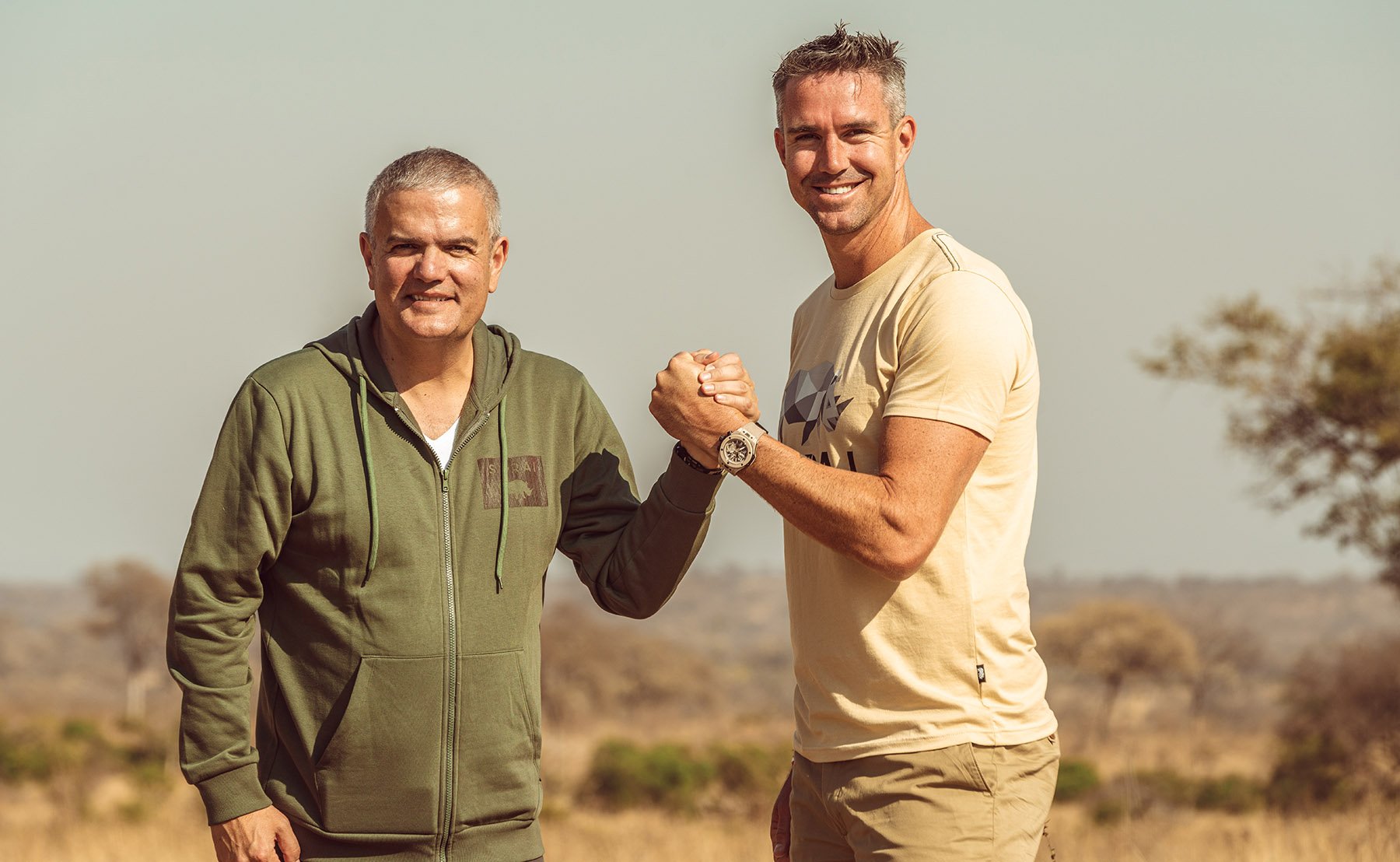 Hublot teamed up with Kevin Pietersen and SORAI, which stands for Save Our Rhino Africa India, to do just that: save the rhinos. These beautiful creatures are threatened with distinction, and resources are needed to prevent this from happening. A large part of the proceedings from the Hublot Big Bang Unico SORAI will be allocated to Care for Wild for the care and conservation of baby rhinos and to the South African National Parks agency. Hublot designed a special version of their Big Bang with the name SORAI, limited to 100 pieces to support this good cause. 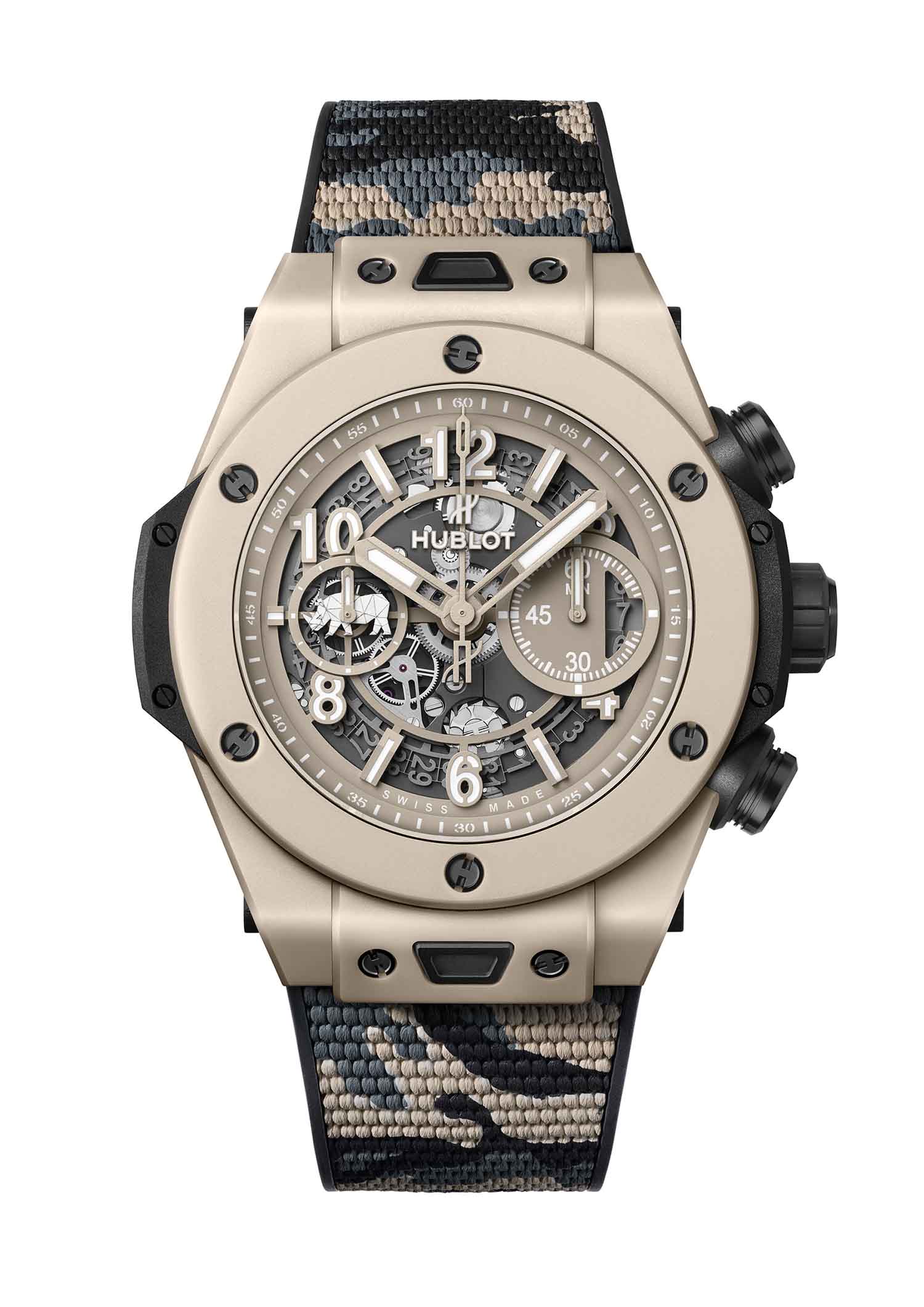 The 45mm diameter Hublot Big Bang Unico SORAI isn’t for the faint-hearted, but boy do I love those ‘safari’ colors on the case, dial and NATO strap. This is proper bad-ass, and the case and bezel are made of ceramic for that ever-lasting look. Attached is a beige velcro strap, but it also comes with a black rubber strap with camo motif. Inside is the self-winding Hublot Unico movement caliber HUB1242 that provides a power reserve of 72 hours. The price for this watch is €23800,- / $24100USD / 22900CHF. But remember, you’re supporting a great cause with this, so it’s not about the price tag. More information via Hublot online.

Just a few weeks ago, I almost purchased a Bulova watch. Almost. I was in New York City for our event, and I had to buy something for my daughter. I passed a few displays with Bulova watches, and I stopped when my eye caught this Computron watch in gold color. No, not for my daughter, but me. I like this geeky stuff, and if I weren’t in a hurry, my already fully stuffed drawer with watches that I never wear but need to have would be a Computron richer. I guess you know how this works.

On the other end of the spectrum, we have this €599,- divers watch from Bulova: the Oceanographer Devil Diver. This watch isn’t particularly new, as it was inspired by the 1970s Oceanographer. There have been some re-editions before, but this green one is one of my favorites. It is a pretty cool piece, powered by the Miyota caliber 821D movement. With a diameter of 44mm and a thickness of 15mm, also perfectly wearable today. The dial is as funky as the originals from the 1970s, and to be honest, the large hands, cross-hair dial and printing could have fooled me for a NOS dial from that period. 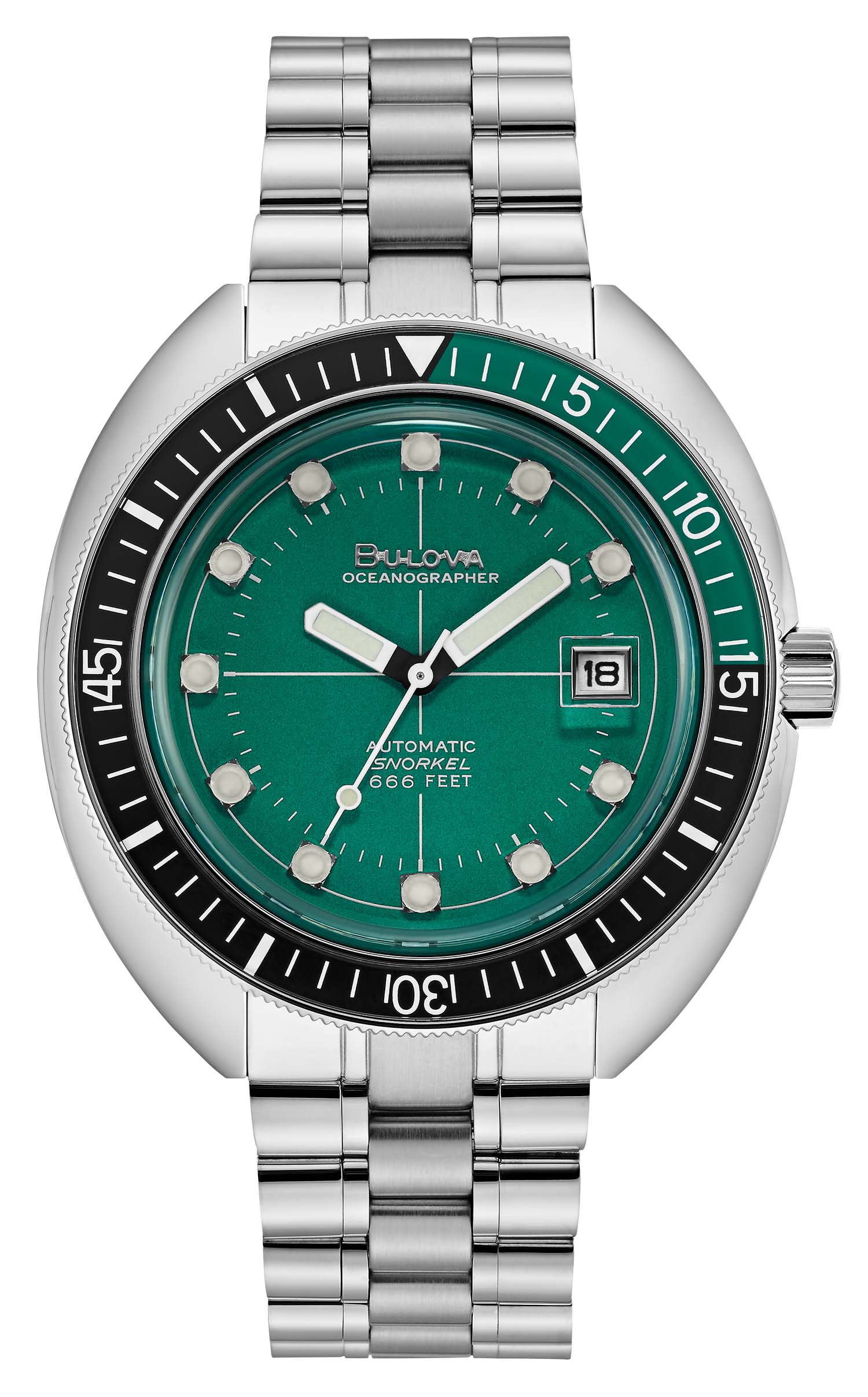 The downside might be that a vintage Bulova Oceanographer can be had for approximately the same money as the retail price of this new Bulova. But, the new one has its advantages as well, of course. Sapphire crystal, modern movement, guaranteed water resistance, etc. More information via Bulova online.

TAG Heuer surprised everyone during BaselWorld by not celebrating the 50th anniversary of the Monaco chronograph. Then, soon after, TAG Heuer started to introduce the concept of releasing five Monaco tributes during the rest of the year. We’re now at number four, introducing during a Monaco event in Tokyo, Japan last week. Every edition refers to a specific decade of the TAG Heuer Monaco’s existence; this 4th edition does so for the 2000s. I have fond memories of the 2000s, and I can’t believe that this is already almost 20 years ago. You could say that this new watch makes me a bit sad, as I realize I am getting old even though the 2000s feel like yesterday. Anyway, let’s not drift away too much from this 4th Monaco limited edition. 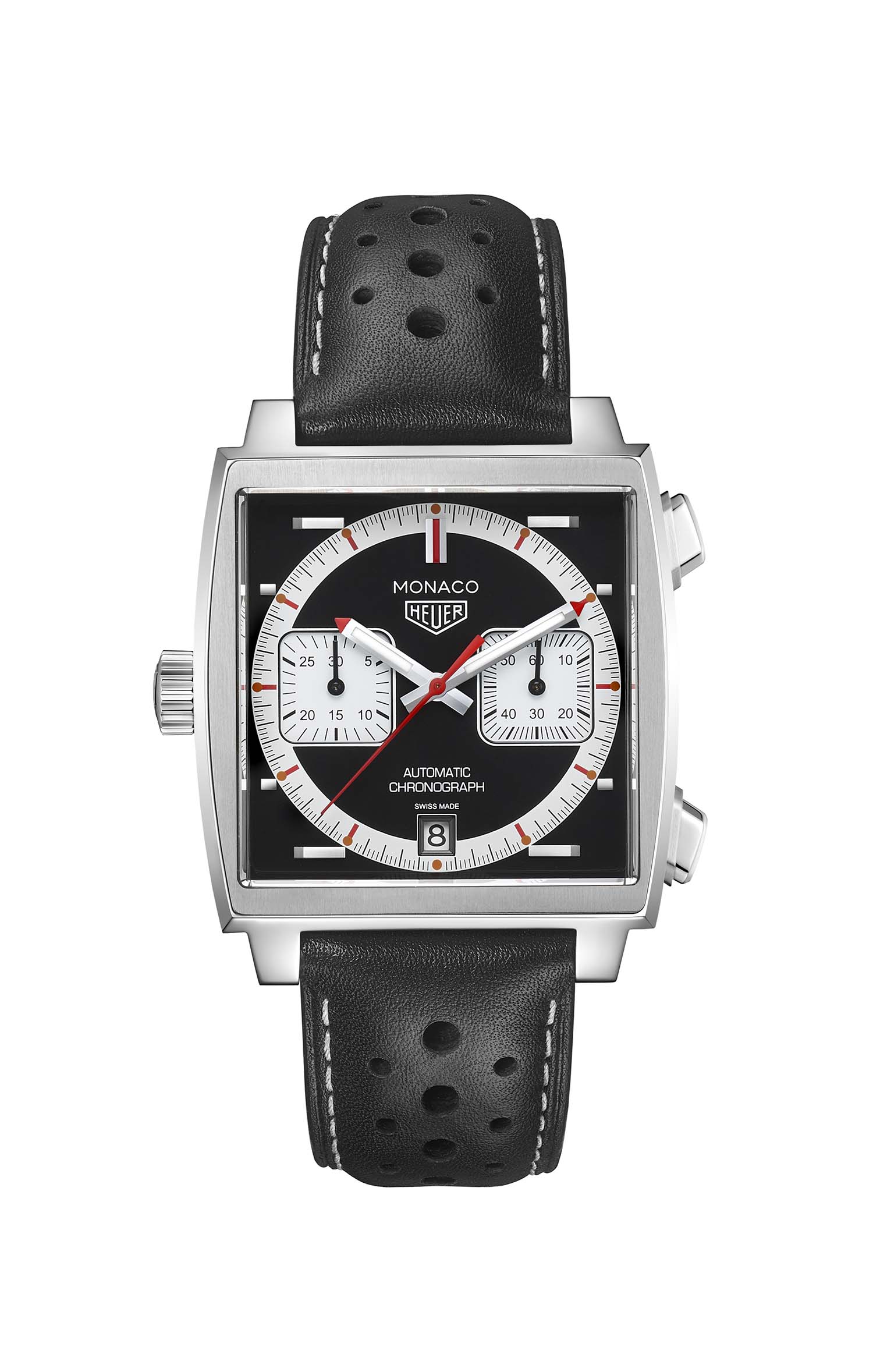 I don’t know what my Fratello colleagues think of this watch, but the Monaco is one of those watches I want to like, but don’t fit me. I’ve tried it in the past, but I can’t stand rectangular watches on my wrist. I love the looks, also of this 4th edition tribute to the 2000s, so it’s just my own quirkiness. Anyway, this Monaco measures 39mm in diameter and is powered by TAG Heuer’s caliber 11 movement. This means the winding crown is on the left, pushers on the right, just like the 1133 reference that was on the wrist of McQueen. Besides the colorway, the “1999-2009 Special Edition” and “One of 169” engravings on the case back are what makes this watch special. This Monaco comes on a black leather racing strap and has a retail price of €5950,-.  More information via TAG Heuer online.

Saving best for last, the 10th and final Lange 1 edition for this year’s 25th anniversary of the Glashütter brand. A grand finale, you could say. I have a lot of respect for A. Lange & Söhne, how they pulled it off to become one of the most important high-end brands in a relatively short period since 1994. By hard work, devotion and a ‘stick to the plan’ attitude, they managed to make a 1994 watch an icon that every watch enthusiasts respects: the Lange 1. It is the attitude of the brand (and thus the people behind the brand) that makes this brand so much more enjoyable than certain other players in that field. Since January, A. Lange & Söhne introduced 10 different Lange 1 anniversary editions to celebrate the 25 years since the very first one. Every month we covered the Lange 1 of that month, be it in a separate article or as part of these This Week in Watches articles. 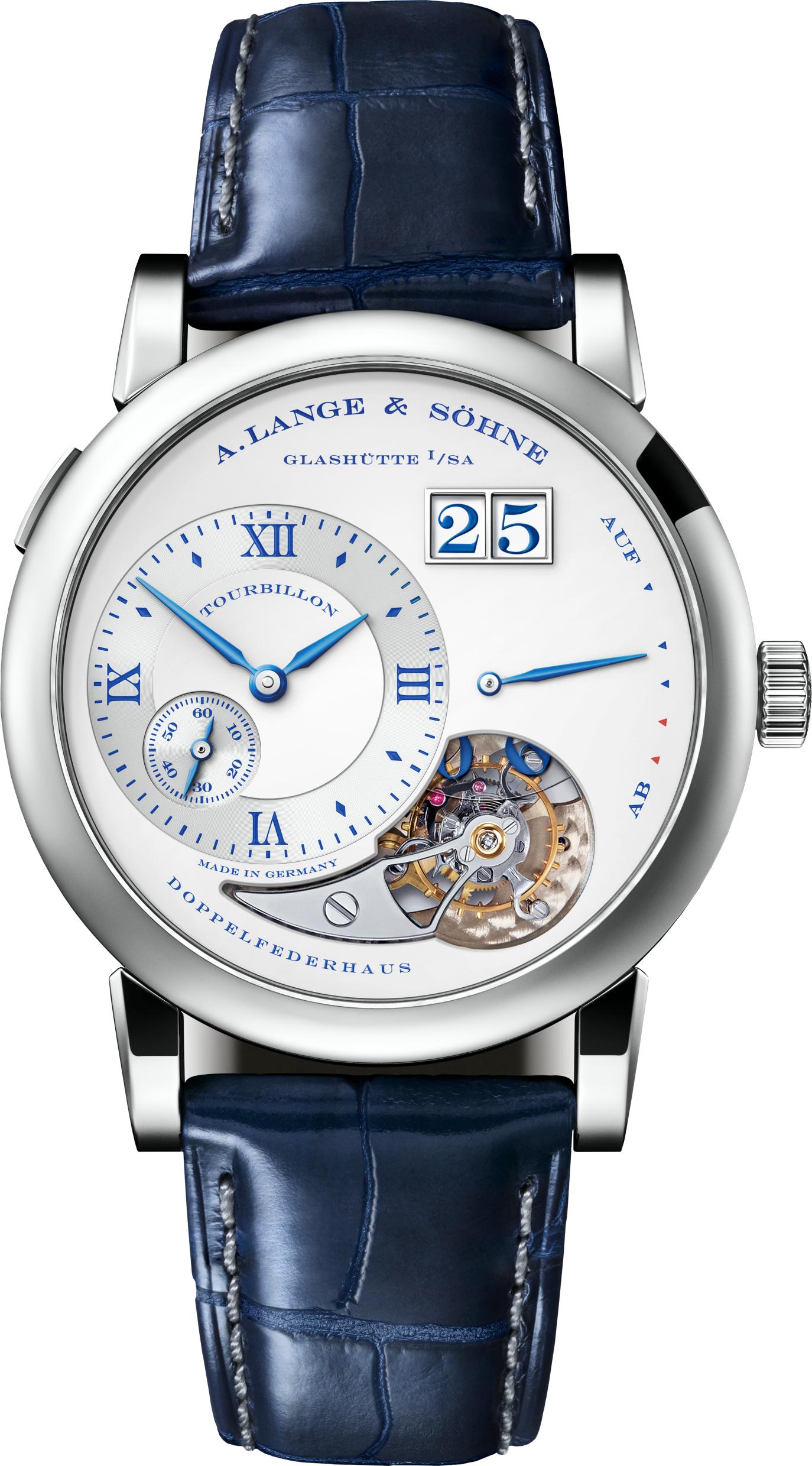 This Lange 1 Tourbillon “25th Anniversary” is end-game material, and not only for the Lange 1 collection. It is simply stunning, and I am pretty sure that all 25 pieces have been called for since its release last week, despite the retail price of €165.000,-. This watch is a dream, and for most of us, it will remain to be just that, a dream. I am okay with that, but I am very sure that at some point I will at least buy a Lange 1. Be it pre-owned or new; the Lange 1 is a grail watch for me.

Inside this Lange 1 Tourbillon “25th Anniversary” (reference 722.066), we find a hand-wound caliber L961.4 movement, that boosts the typical 3/4 mainplate and use of German silver. No less than 381 movement parts ensure the perfect inner workings of this tourbillon watch. Besides time, big date and visible tourbillon cage (through the dial), it has the typical A. Lange & Söhne Auf/Ab power reserve indicator. The white gold case measures a modest but very wearable 38.5mm in diameter and the dial is made of solid silver. All 25 watches are uniquely numbered, of course. More information can be found via A. Lange & Söhne online.

That’s all folks! We will be traveling a lot in the coming weeks to different brands and events. Keep a close eye on our Instagram account (@fratellowatches), so you’ll have an idea of what’s coming and happening.

Hot Topics
Introducing: The Omega Speedmaster Super Racing With Spirate System
165 comments
Design Vs. Specs — Which Is More Important To You When Buying A Watch?
87 comments
New Release: The Limited-Edition Seiko Prospex SLA067J1 Diver
59 comments
My Predictions For New Omega Speedmasters In 2023
57 comments
The Time To Buy Is Now: How The Current Economic Climate Influences Watch Buying And How You Should React
51 comments
Popular
A Question From A Reader: “Which Modern Speedmaster Is Closest To The Original Moonwatch?”
Robert-Jan Broer
14
Top 10 Rolex Watches – Overview of Models Favoured By Our Readers
Fratello
25
Rolex Submariner – Historical Overview Of A Diving Legend
Robert-Jan Broer
22