Two Incredible Speedmaster Watches For €5,000 (Both) — The X-33 And Rattrapante

The treasures are still out there! Last week, I wondered for a while if everything Speedmaster-related was skyrocketing (no pun intended) out of reach, but I quickly found out that this is not the case. Yet.

Two of my favorite Speedmaster watches are up for grabs (hey, everything is relative these days) for a total of €5,000. I am talking about the Speedmaster X-33 and the Split-Seconds (or Rattrapante). The X-33 reference 3290.50 is even considered to be a Speedmaster Professional, and the Rattrapante reference 3540.50 seems to be sharing a very similar case design. 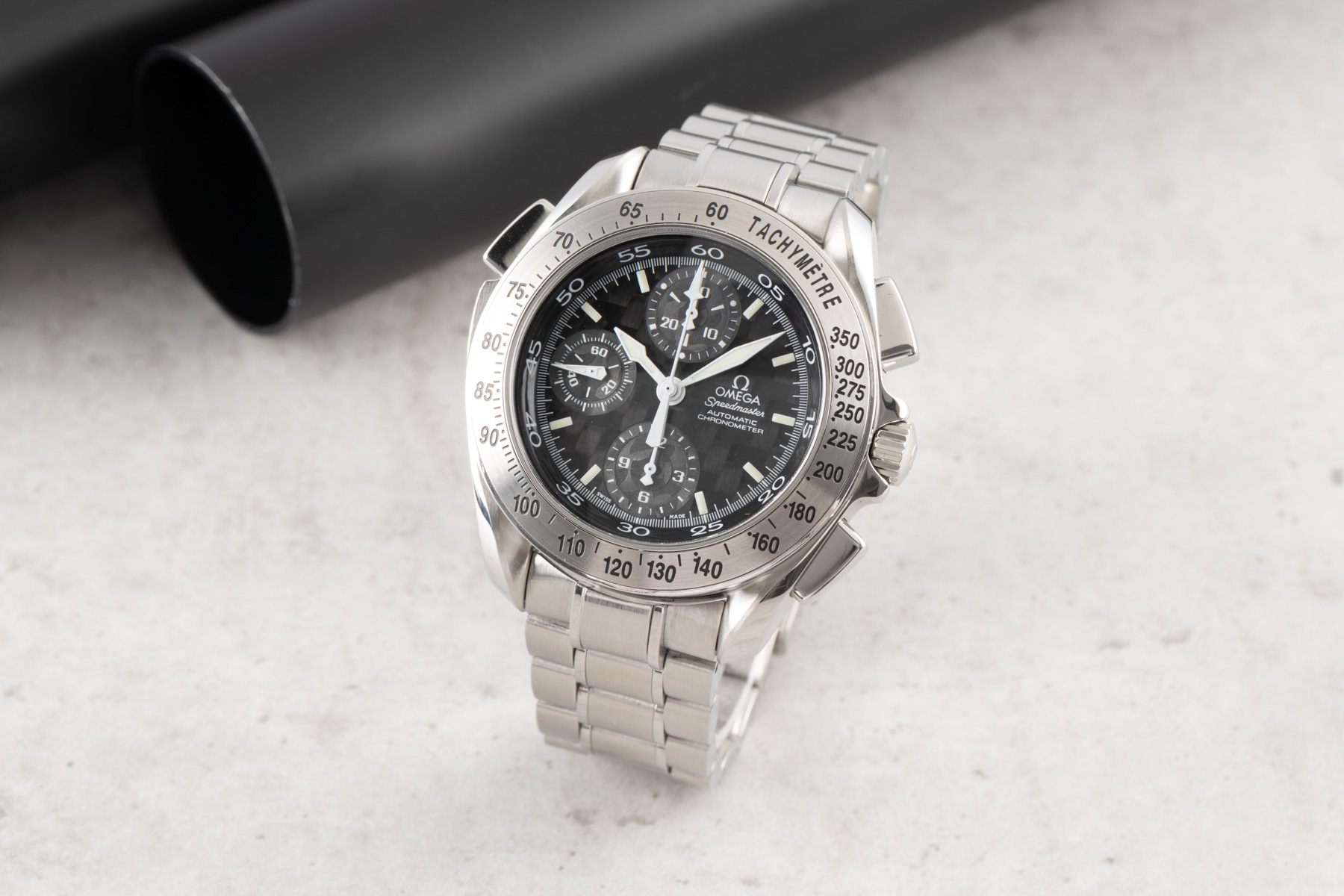 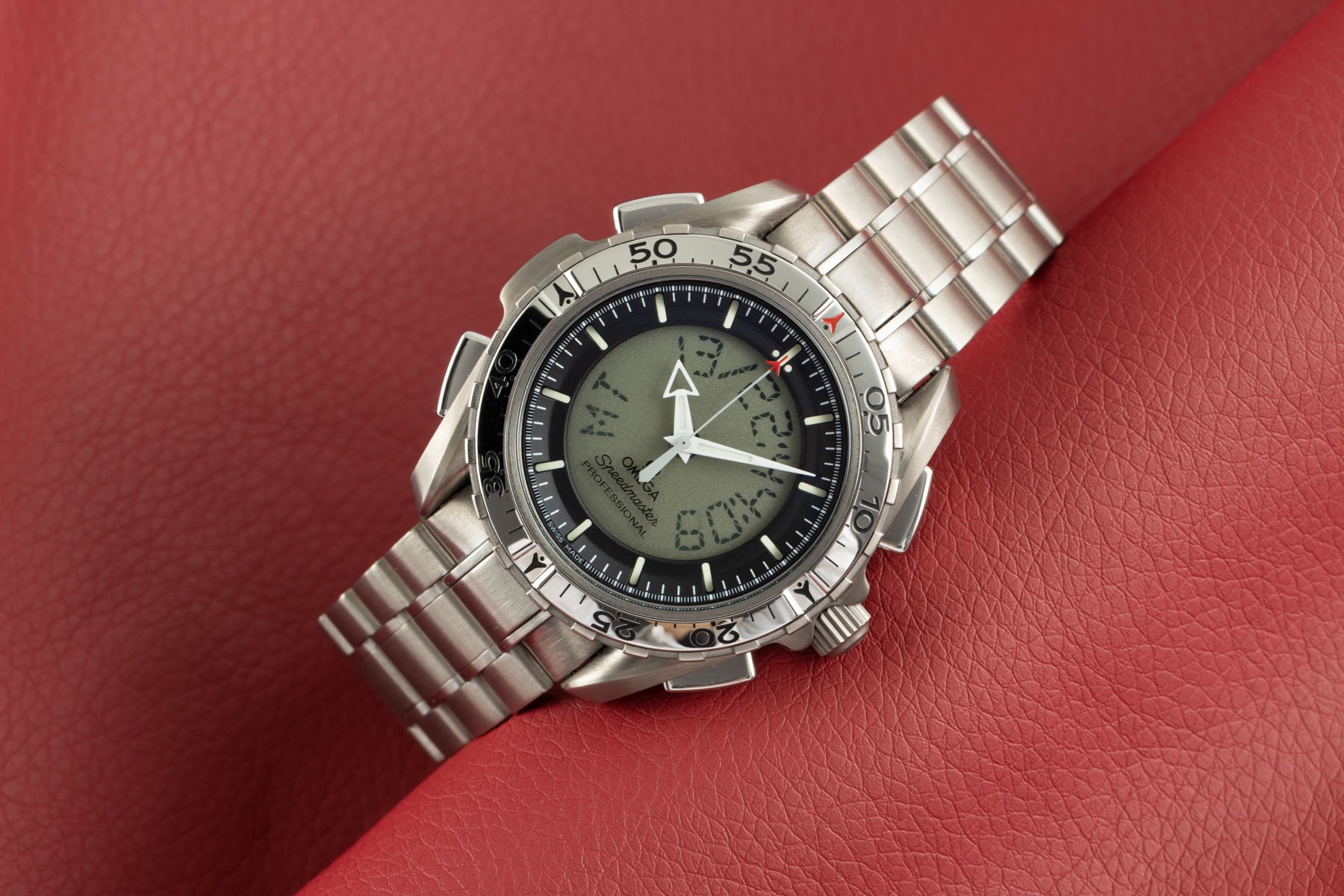 The Speedmaster X-33 doesn’t need a full introduction here on Fratello. We’ve covered it many times, and during our #SpeedyTuesday tour in 2019, we’ve talked with astronauts Terry Virts, Nicole Stott, and Jean-François Clervoy about the X-33 in detail. It’s a marvelous watch, no matter which generation of the three you’d pick.

The Speedmaster X-33 Generation 2 is still handed out by NASA to astronauts who are launched from the USA and Generation 3 is given to all astronauts and cosmonauts that leave Earth via Russia. Astronaut Jean-François Clervoy played a big role in developing the additional functionality of the X-33 Gen3. However, the Speedmaster X-33 was never qualified for EVA, as the LCD screen would immediately stop working due to the extreme temperature. So, there’s still the hand-wound Speedmaster Professional Moonwatch for that. 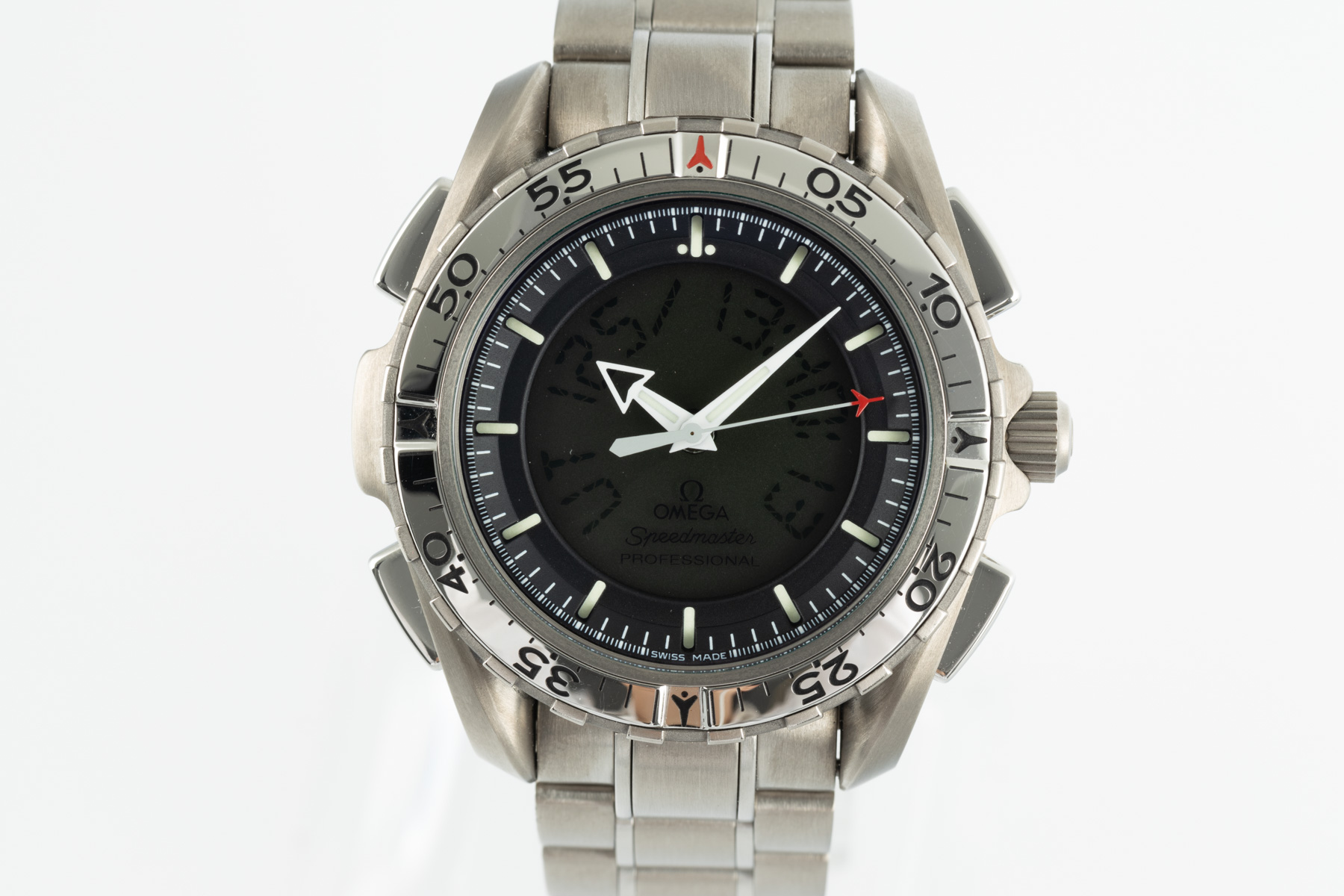 At some point, I had several X-33 watches at the same time. They were all Speedmaster X-33 Gen1 pieces, like the one pictured. I sold one to my colleague Michael Stockton, who probably only wore it once or twice. I guess he’s more into vintage mechanical watches, but at least he has one. The other one I sold to another friend of mine, who happens to be a (Speedmaster) watch collector as well. And that’s not a coincidence, of course. I kept the third and last one, for a very simple reason. This watch was owned by an ESA astronaut, a childhood hero of mine as he was the first Dutch citizen to fly on the Space Shuttle.

He received the watch after his space endeavor, during the introduction event of the X-33 in 1998. He passed away a few years ago, unfortunately, and his watch ended up with me. I wear it occasionally, on a red fabric Omega strap. The X-33 is a great watch to wear, easy to operate — despite the number of buttons — and has its place in the history of space exploration. Besides the time, the chronograph, date, and alarm are most probably the functions you’ll be using. Although the mission timer can also be used to measure the length of your entire travel, for example. And the countdown alarm might be useful as well. 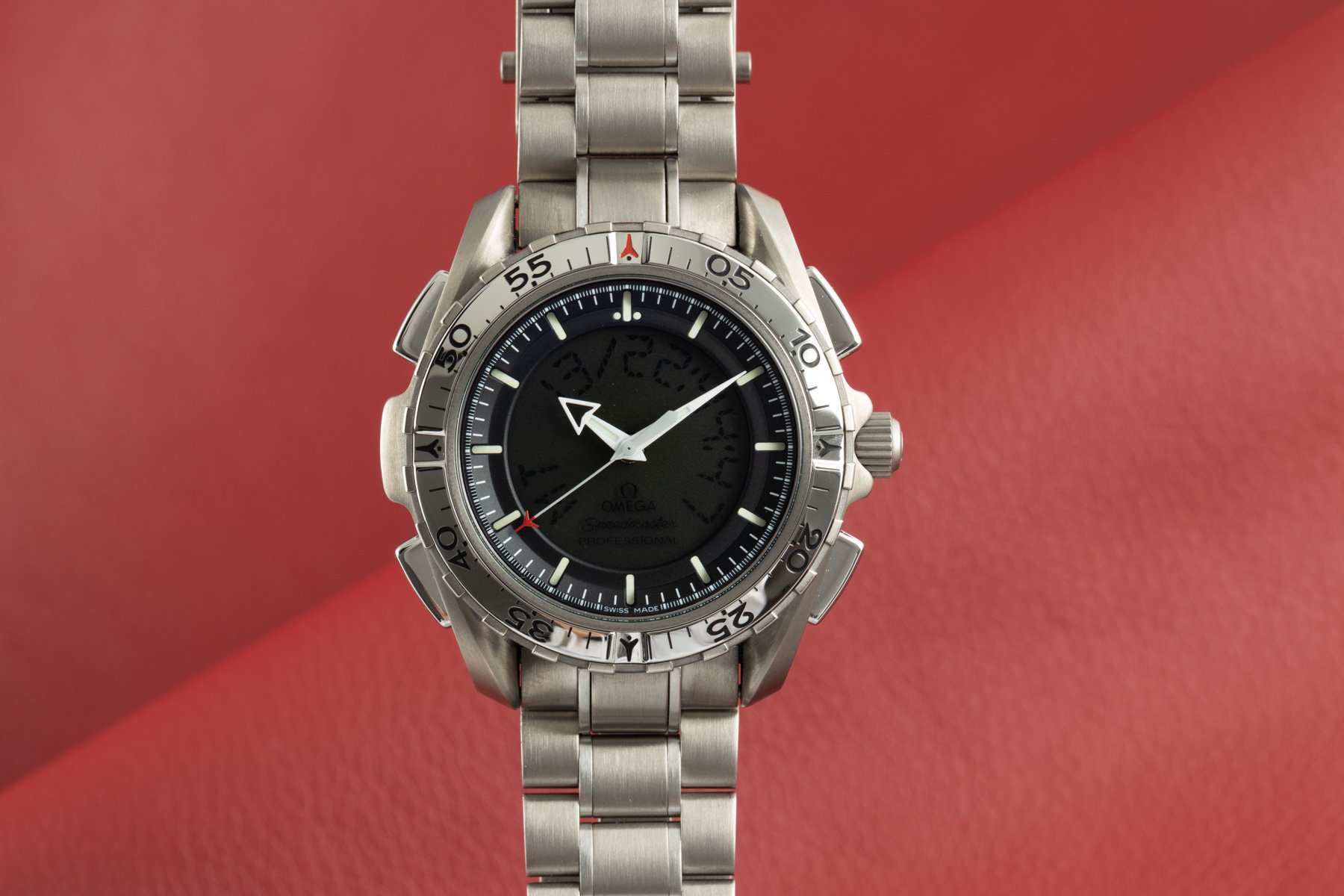 It may be quartz, but the manual might be handy

The Omega Speedmaster X-33 I found for €2,050 comes without a box or papers, but if you’re looking for a watch to wear on daily basis, it is perfect. If you want one with a box and papers, you need to add a few hundred more. The box is kinda neat though, made of this white cloth that shows a resemblance with the astronaut suit. What you do need is a manual though, but you can find it online for sure. Or, if you prefer, there is always the chance of finding a physical one on eBay.

These manuals come in handy when trying to wrangle some of the watch’s more esoteric functions into check (especially the syncing of the hands with the digital display — that takes a bit of explanation. Most other settings, however, are pretty straightforward. Like most quartz-powered movements in Omega watches, this caliber 1666 also features this End-Of-Life indicator. 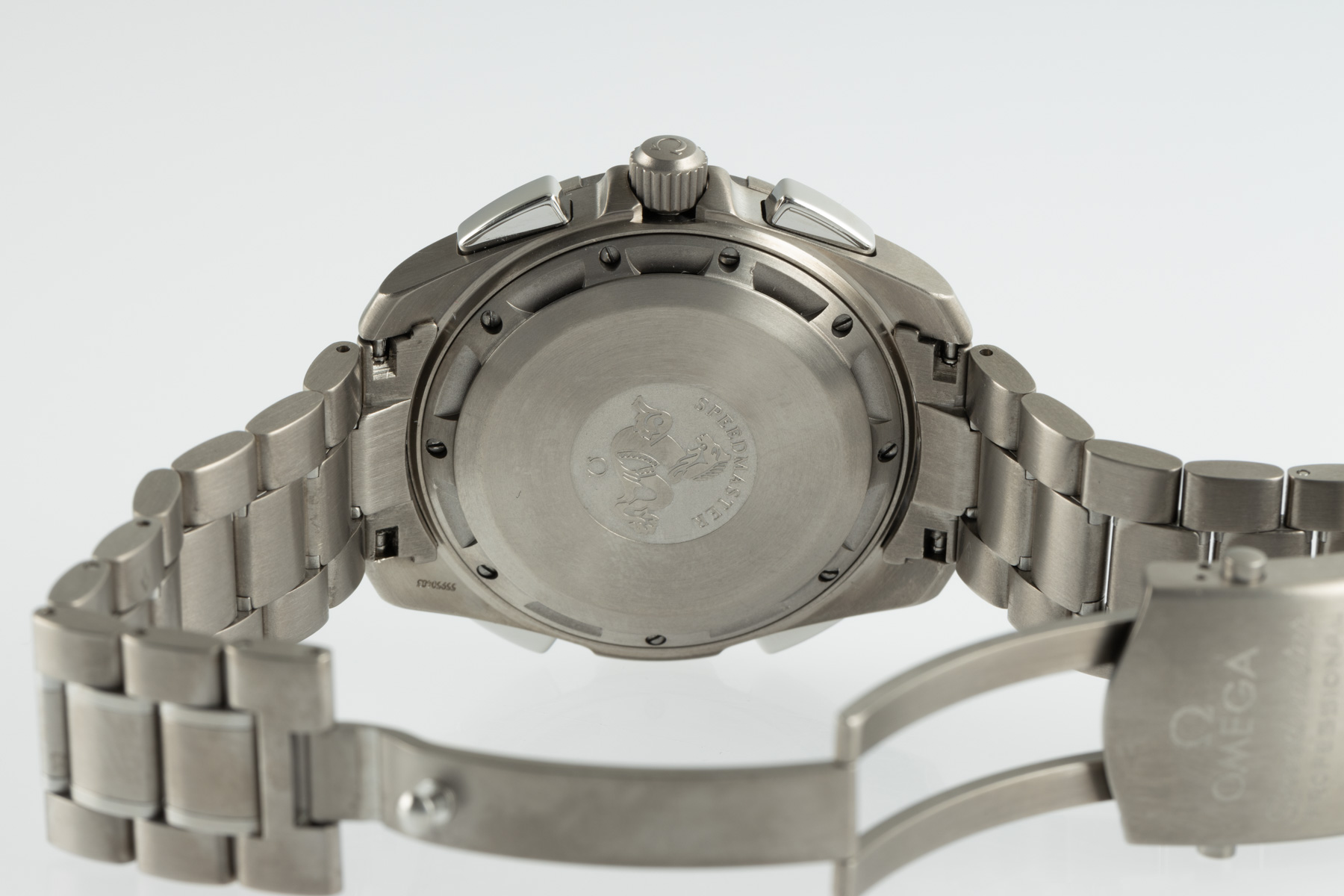 The seconds hand will make 5-second jumps in the last few weeks of the batteries’ combined lifespan (there are two batteries inside the X-33). When you see this, it’s time to change! It is interesting to know is that the later X-33 Gen2 (easily identifiable by the different crown and the brushed instead of polished bezel inlay) had an updated caliber 1666 movement. The functionality didn’t change though. Most Speedmaster X-33 Gen1 watches that have been serviced by Omega are most likely to be updated with his newer caliber 1666. 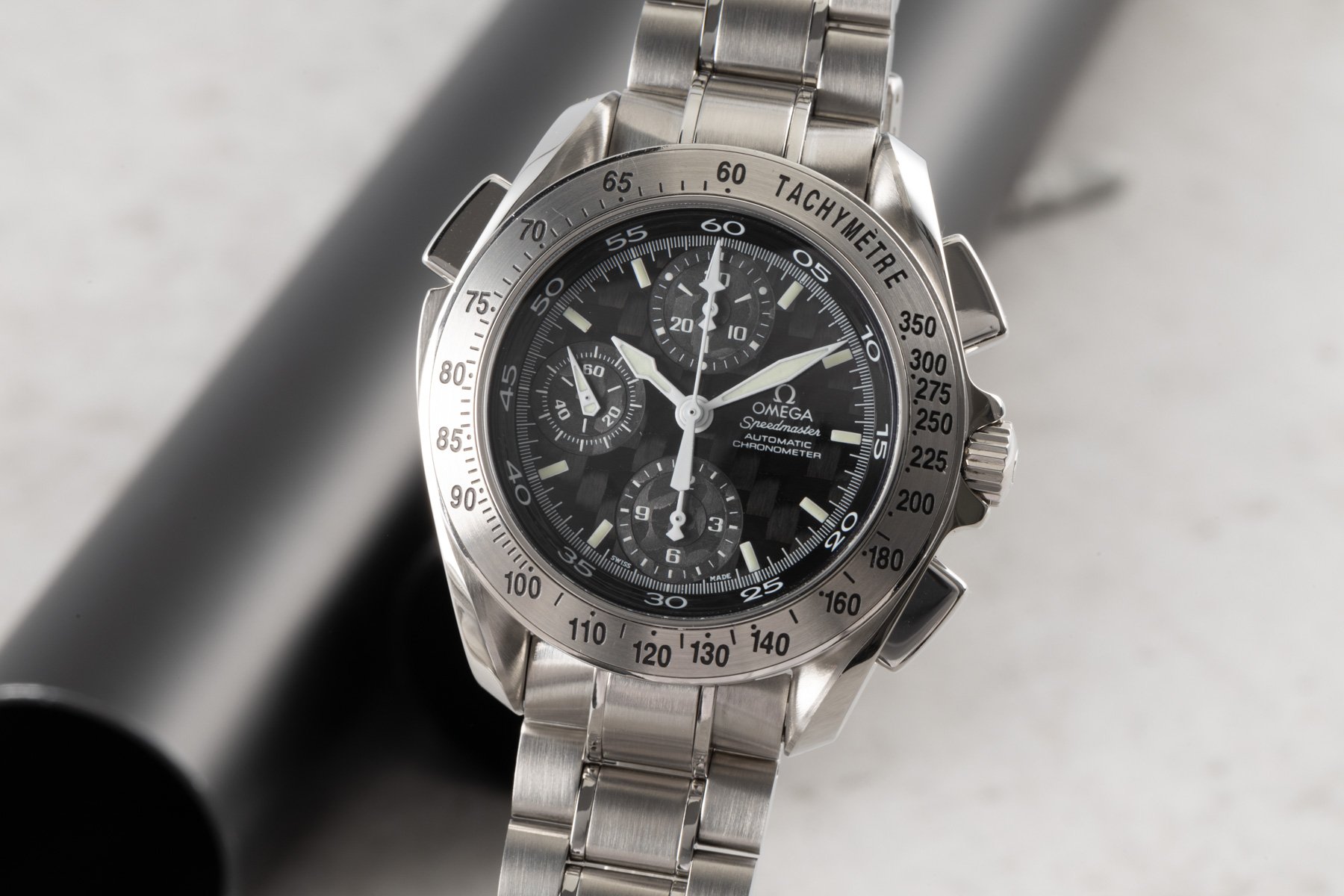 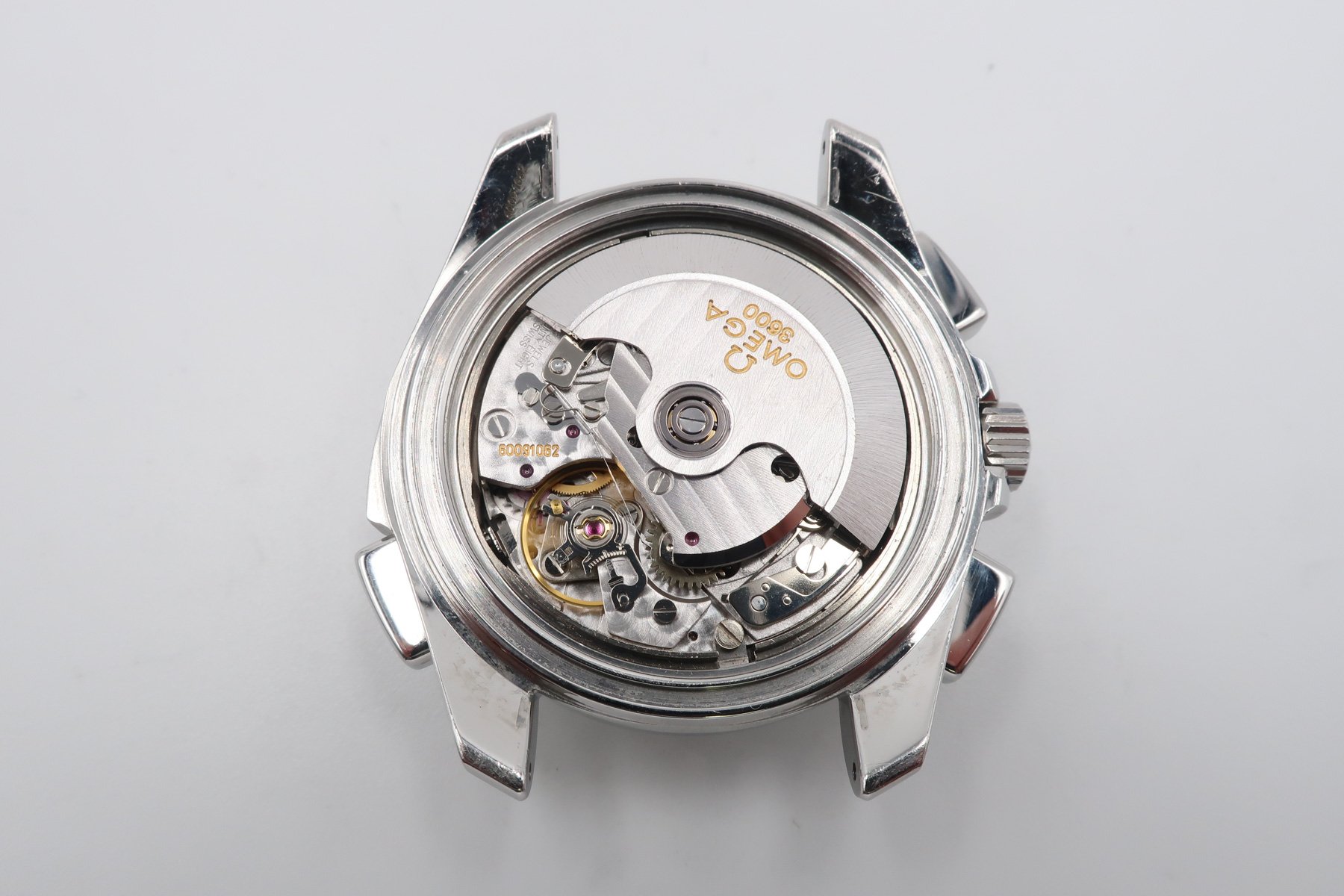 What always intrigued me about the Speedmaster Split-Seconds was the movement. Inside, you’ll find caliber 3600 with a rattrapante complication. Caliber 3600 is based on the famous Valjoux 7750, with the additional split-seconds function. It is basically, the same concept as IWC deployed on its Pilot Doppelchronograph. Better still, the movement has been chronometer-certified by COSC. When this watch was introduced, around 2000, it definitely wasn’t cheap at €3,760. The Moonwatch reference 3570.50 retailed for €2,220 at the time and the X-33 for €2,680 (on a titanium bracelet). 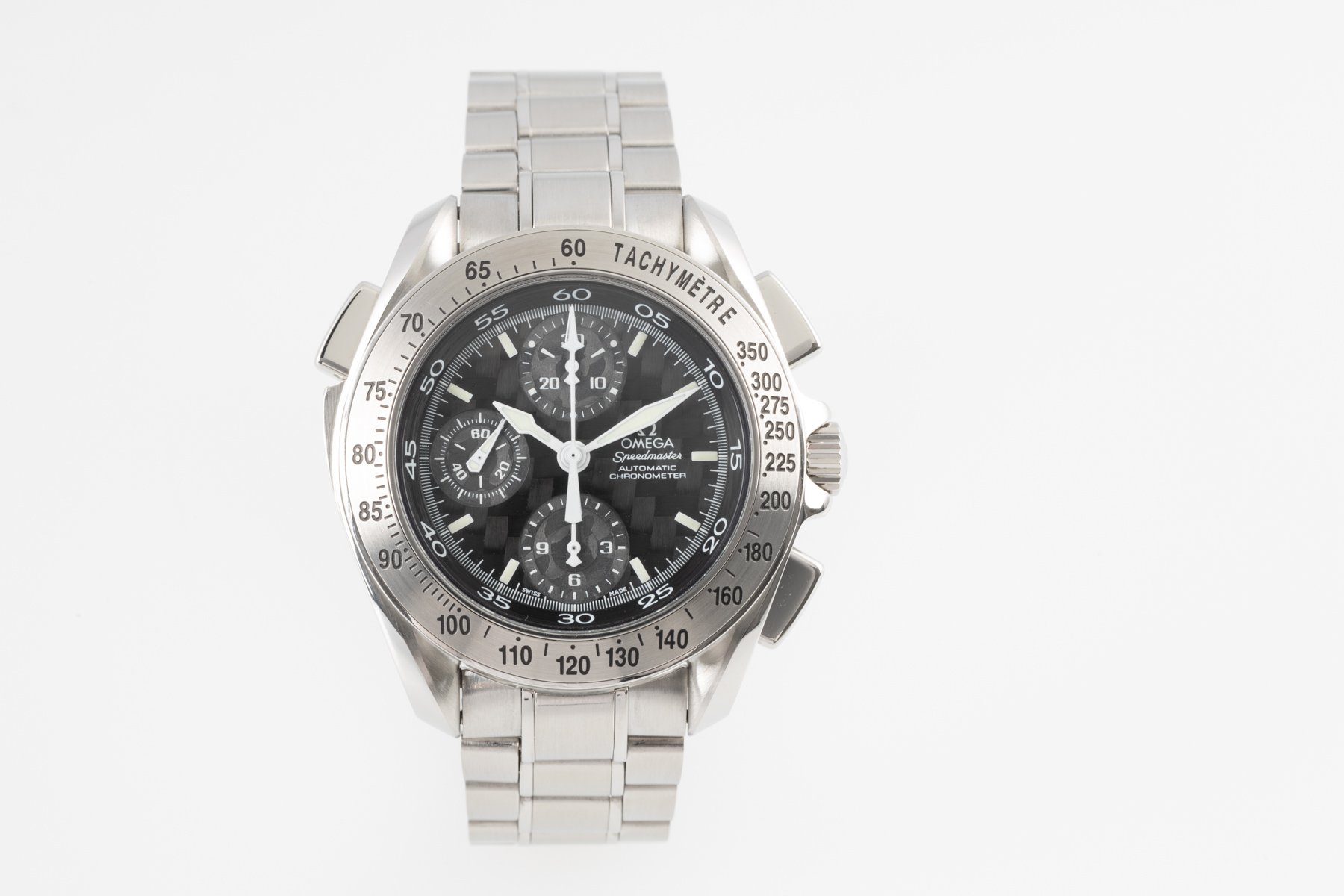 But it was still cheaper than most rattrapante watches from the competition out there. And it looked amazingly high-tech, yet typically a Speedmaster with those lyre lugs. Additionally, Omega decided to put some carbon fiber to use for the dial. There were some variations when it comes to dial colors (black, blue, and silver), but only the black had the carbon fiber. I am not normally a fan of using carbon fiber for dials, but in this case, I kinda like it. That also has to do with the “futuristic” shape of the case. The version of the Speedmaster Rattrapante I have here has a steel bracelet. It is exactly the same bracelet as for the Speedmaster Professional at the time, including the engraving in the clasp. 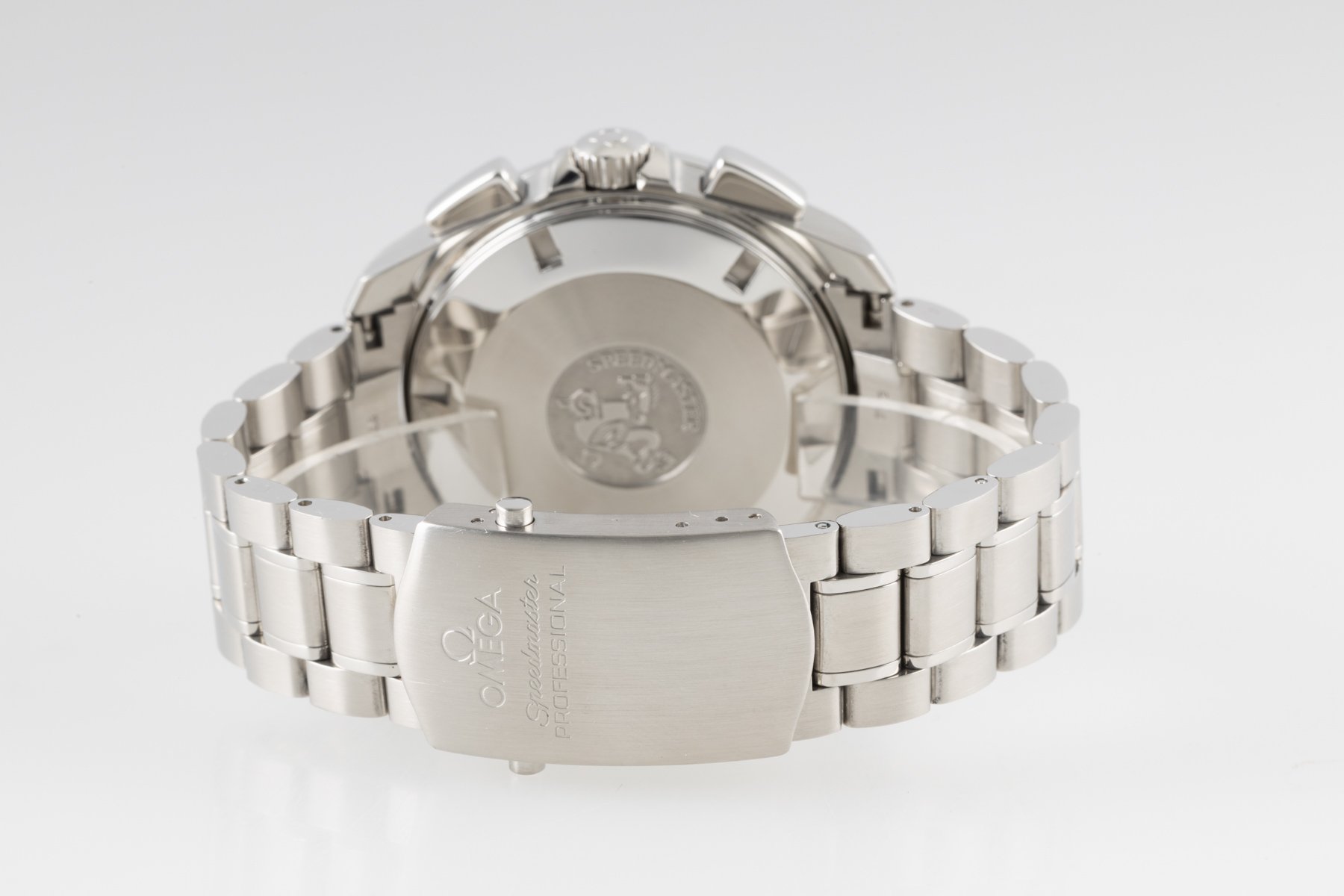 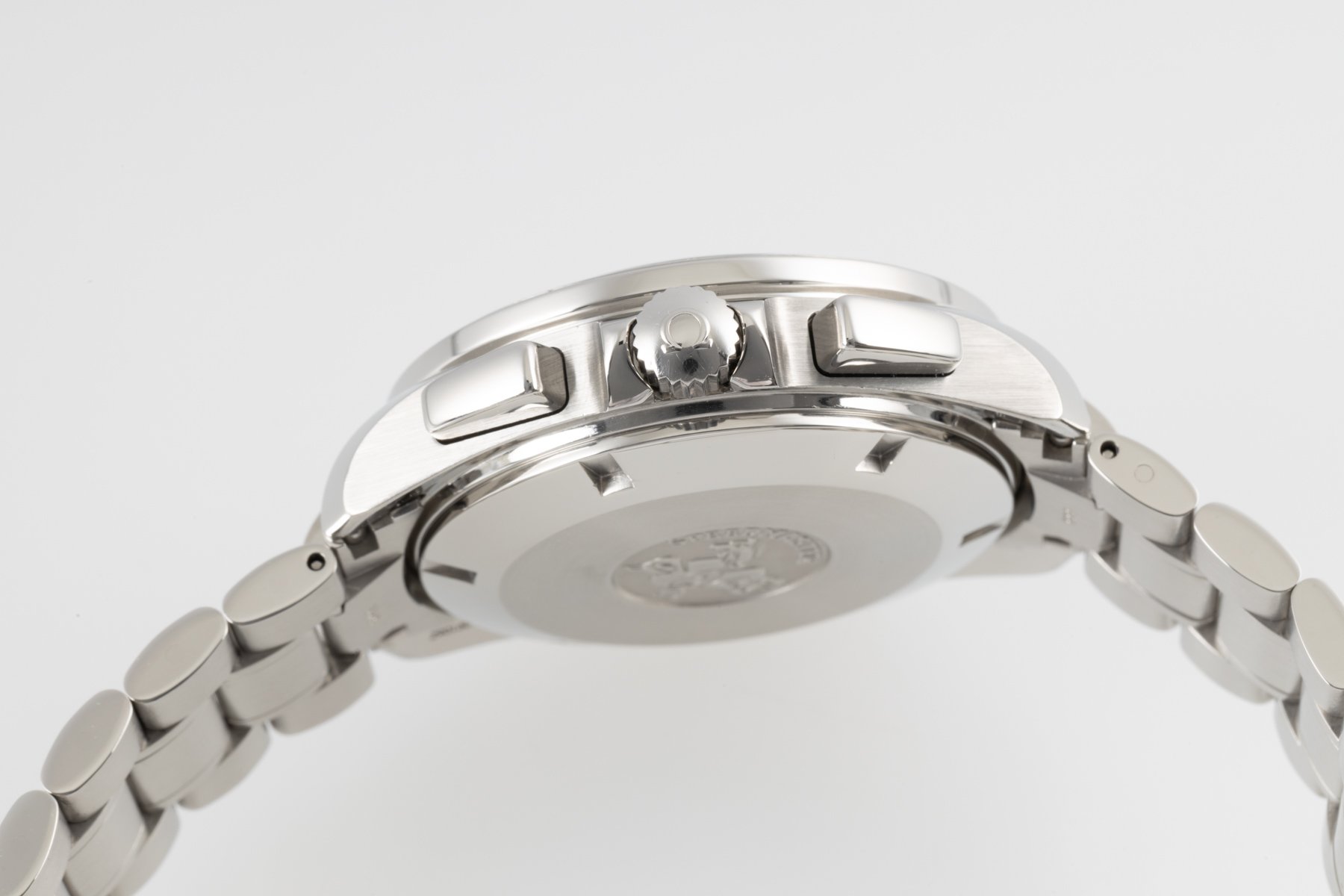 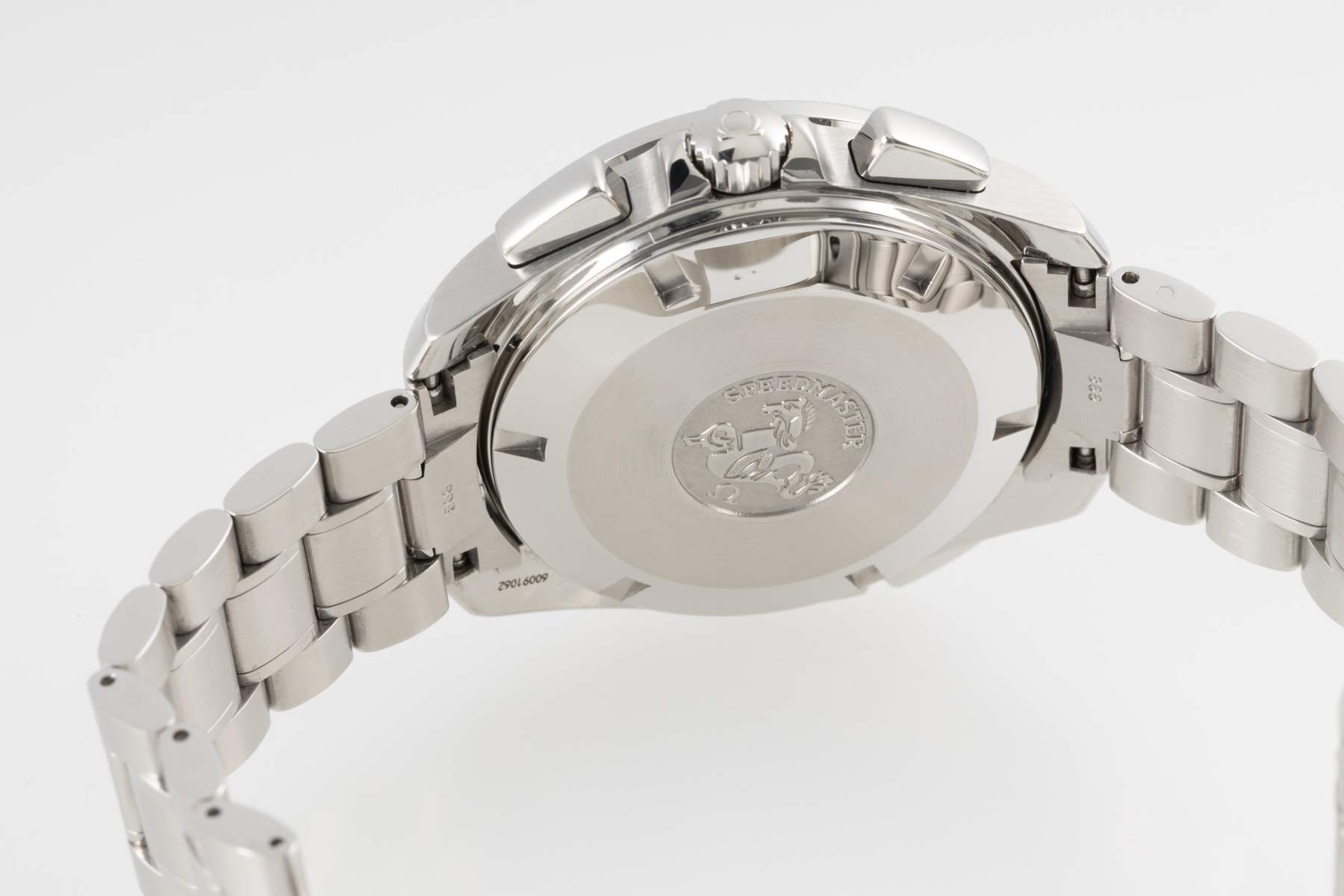 Back then, these watches weren’t for everyone nor are they now, but it shows that there’s still some interesting stuff out there for the Speedmaster fans. Especially those who are looking for something other than the Moonwatch models or Mark models. However, my advice is not to buy these because they are relatively affordable, but because you like them. These watches are surely not investment pieces, nor will they be (at least not in the short term). That’s good news for real collectors. It means that flippers do not show much interest in them anyway. In my opinion, both watches have some very unique characteristics and are still clearly related to the Speedmaster Professional Moonwatch. 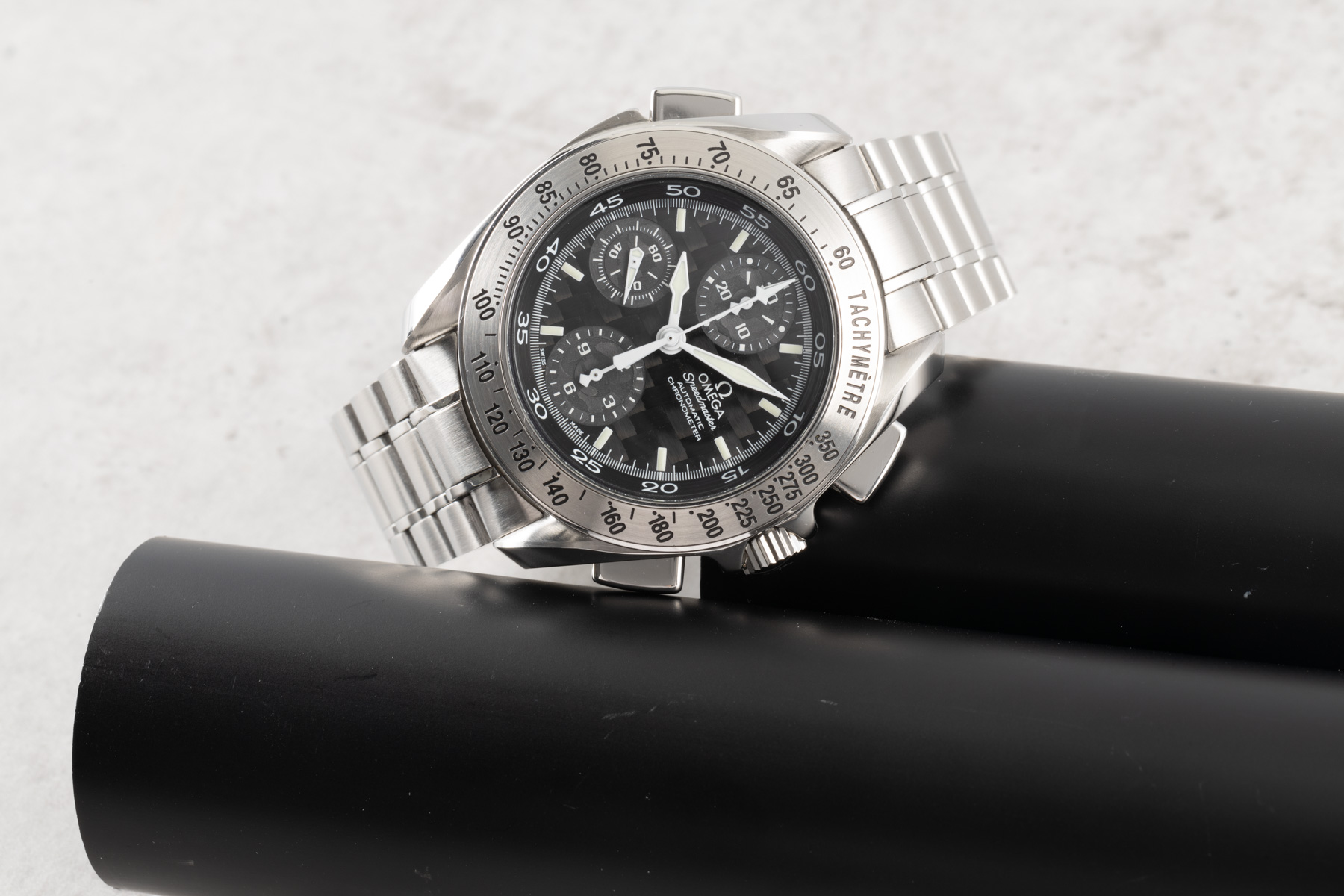 Compared to most other Speedmaster variations (think Reduced or the Date models), these X-33 and Rattrapante watches were much more innovative. Perhaps neither is as easy to wear as the Reduced or Date models, but these also weren’t meant to be watches for most people. If you’re a Speedmaster enthusiast or collector and have your Speedy Pros, Ed Whites, etc. you might want to give one of these watches (or both) a thought. Thanks to Zeit Auktion for the images. You can find both watches offered on their website.