This 52Mondayz episode is more or less on a Sunday, it’s Christmas! However as the calendar indicates that Christmas is on a Monday this year, here we are. The last 52Mondayz of 2017, it had to be a special one. And as next week Monday will be January 1st 2018, I want to wear a perpetual calendar to see all that happen. The Ulysse Nardin GMT ± Perpetual is my weapon of choice. 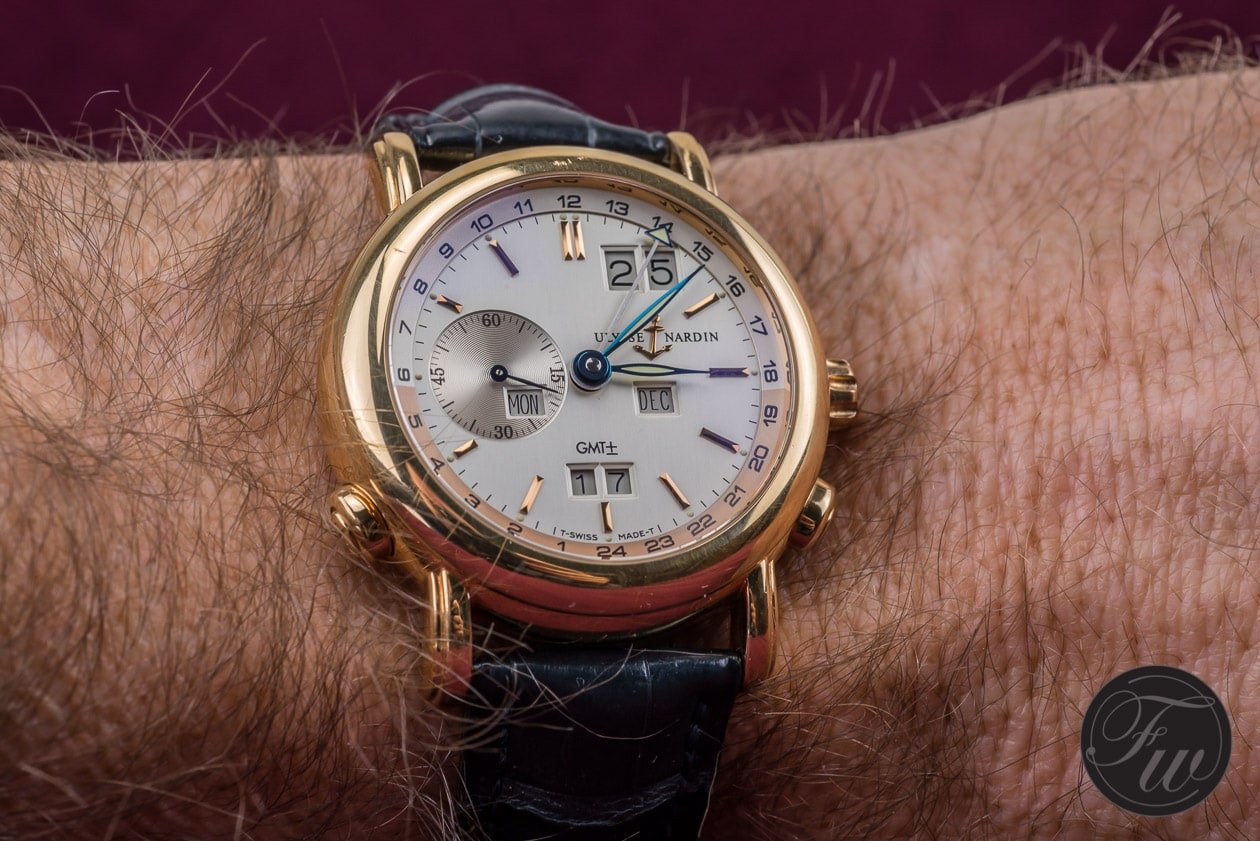 The Ulysse Nardin GMT ± Perpetual on my wrist. 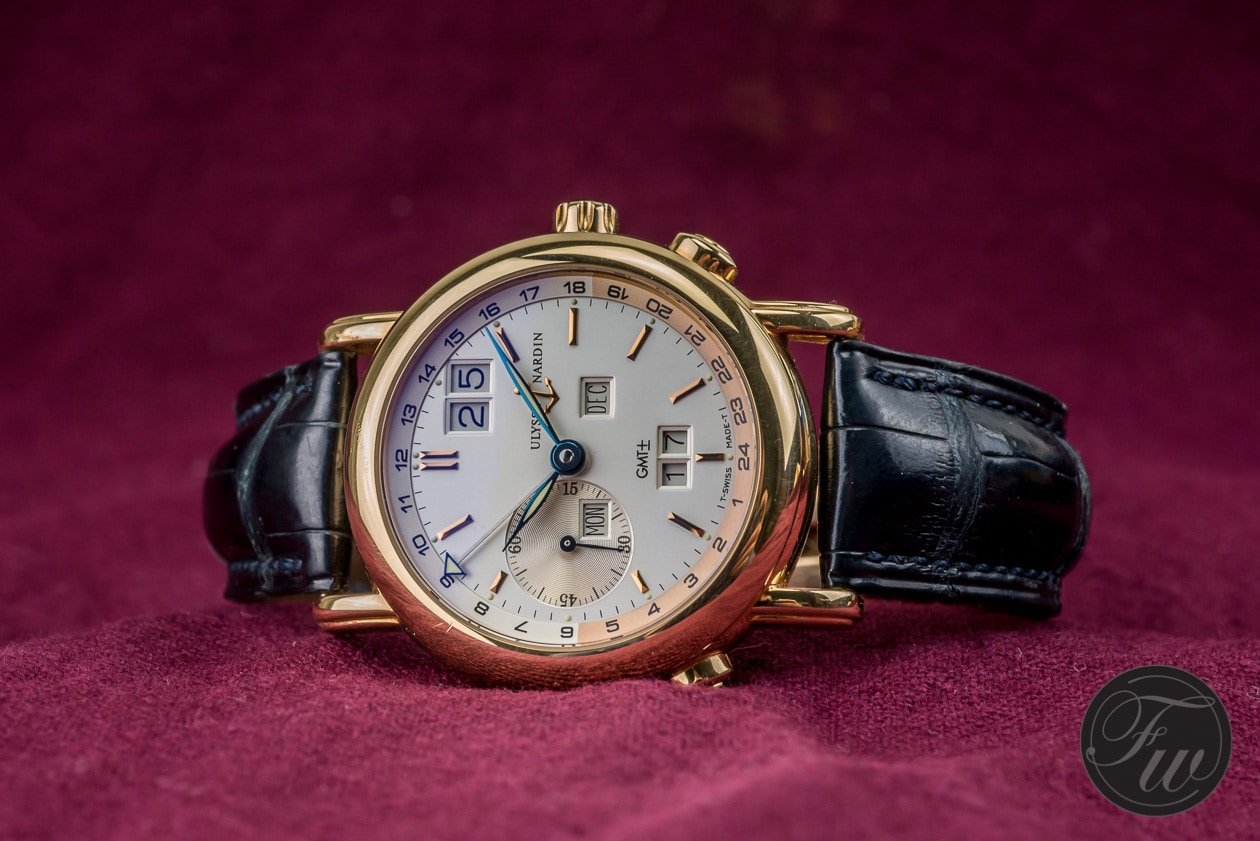 Ludwig Oechslin’s goal was to find a new more simple, functional and reliable design, which should deal with the most common problems for a perpetual calendar watch. Quickly setting the date. Setting the date backward. And the ability to independently correct for the Gregorian calendars leap year formula. For the latter, other perpetual calendars need intervention by a factory’s watchmaker. 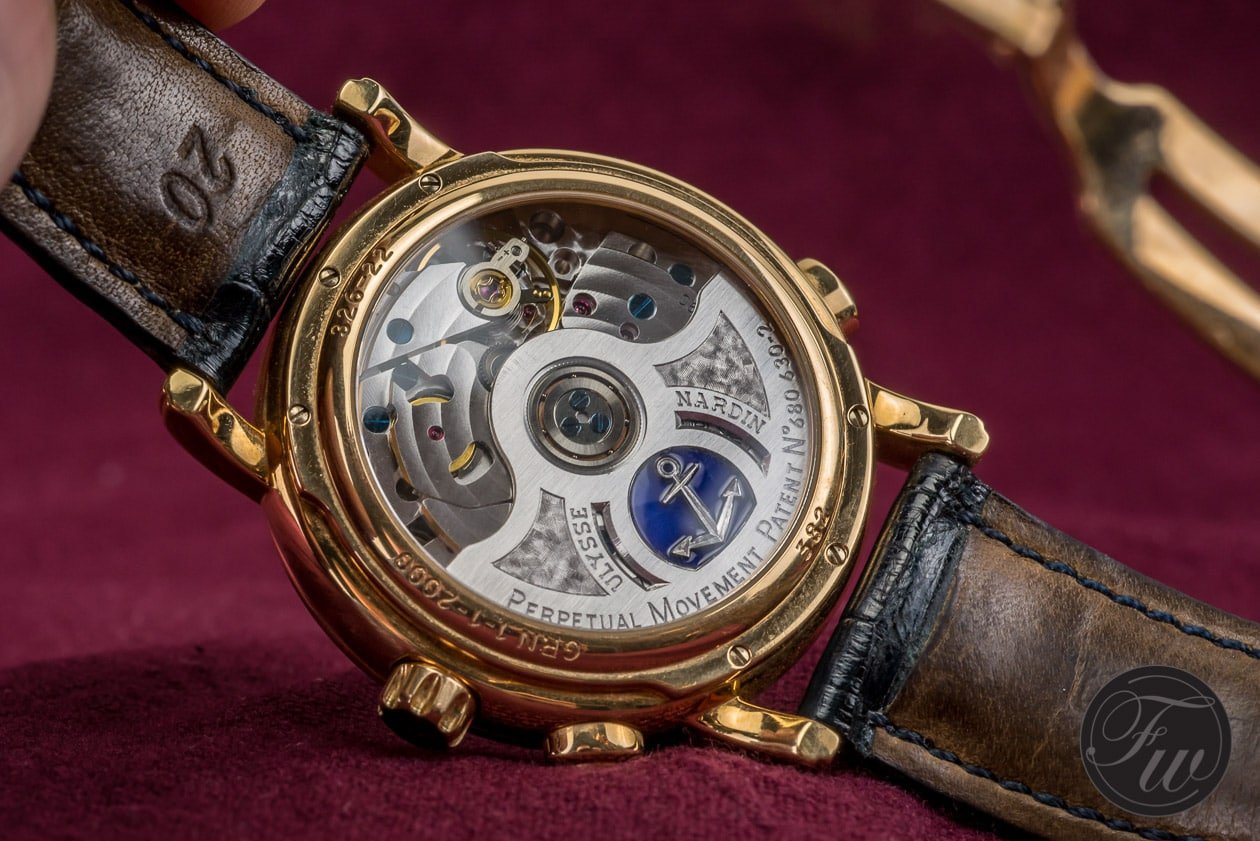 Poor legibility is another thing which doesn’t add to the practicality of regular perpetual calendars. To enhance that as well Ludwig Oechslin opted for window displays instead of the normally seen tiny hands. Along the way, he constructed a special double-digit display that places both digits on the same level. Providing easier reading of the date and year, and at the same time, it adds to the aesthetics, compared to two-level systems. This invention was even registered under patent CH 688 671. 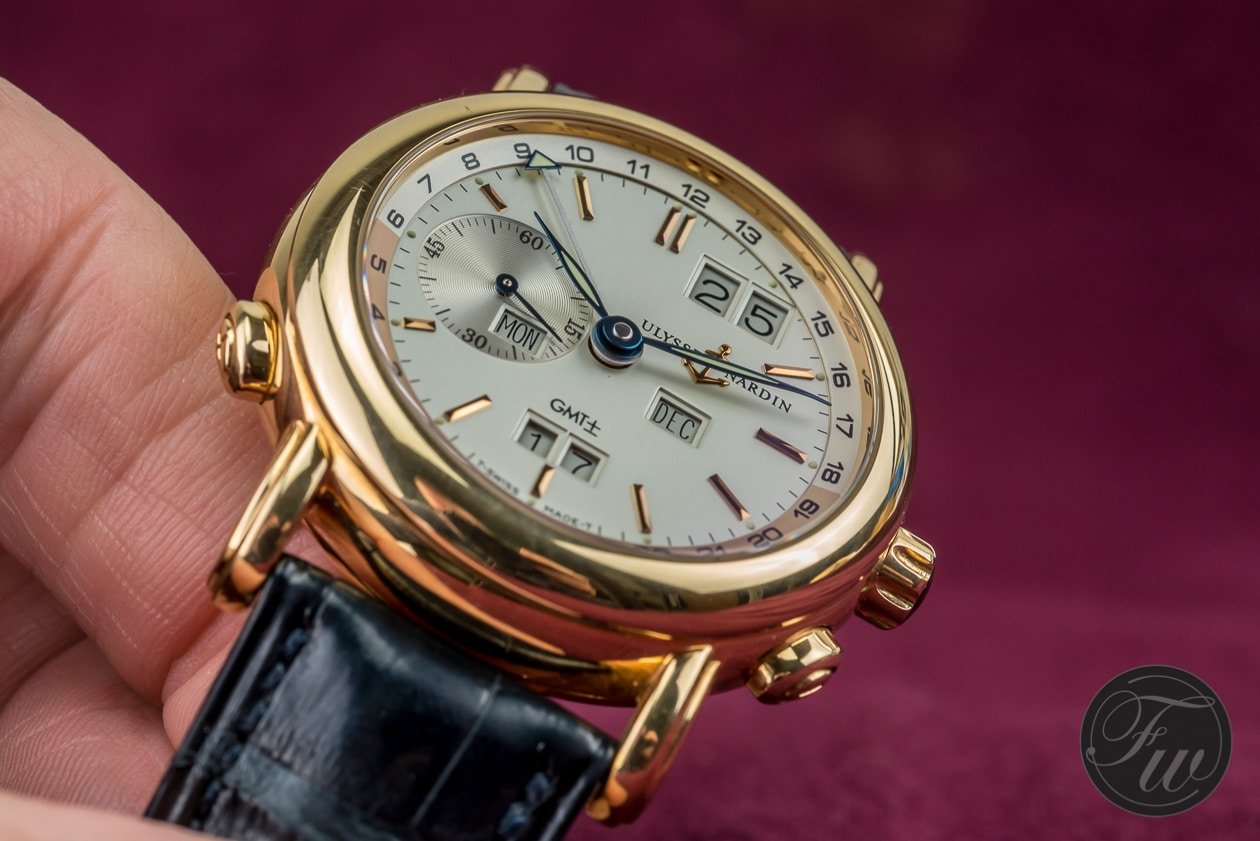 GMT plus and minus

As the model name indicates, the Ulysse Nardin GMT ± Perpetual adds a second time-zone, or GMT, functionality to its predecessor. The ± sign refers to two buttons at the side of the watch’ case. A (-) at 16:00, and a (+) at the position of 20:00 hour.

(+) and (-) buttons places on both sides of the casing

The second time zone is shown by a triangle-headed hand which travels the dial in 24 hours. Oddly the 12 o’clock noon indication is on top of the dial. While 24:00 or 00:00 hour, midnight, is at the bottom. Once during a dinner, I had the opportunity to ask Mr. Oechslin about the reason for this. The answer came from his penchant for astronomy. At noon the sun is at his highest point, so at noon a 24-hour hand should point upward. As you’ll see at the pictures, the 24-hour scale around the dial has two colors. A light upper part indicating the hours with the light of day, and a somewhat darker bottom part, indicating the night. 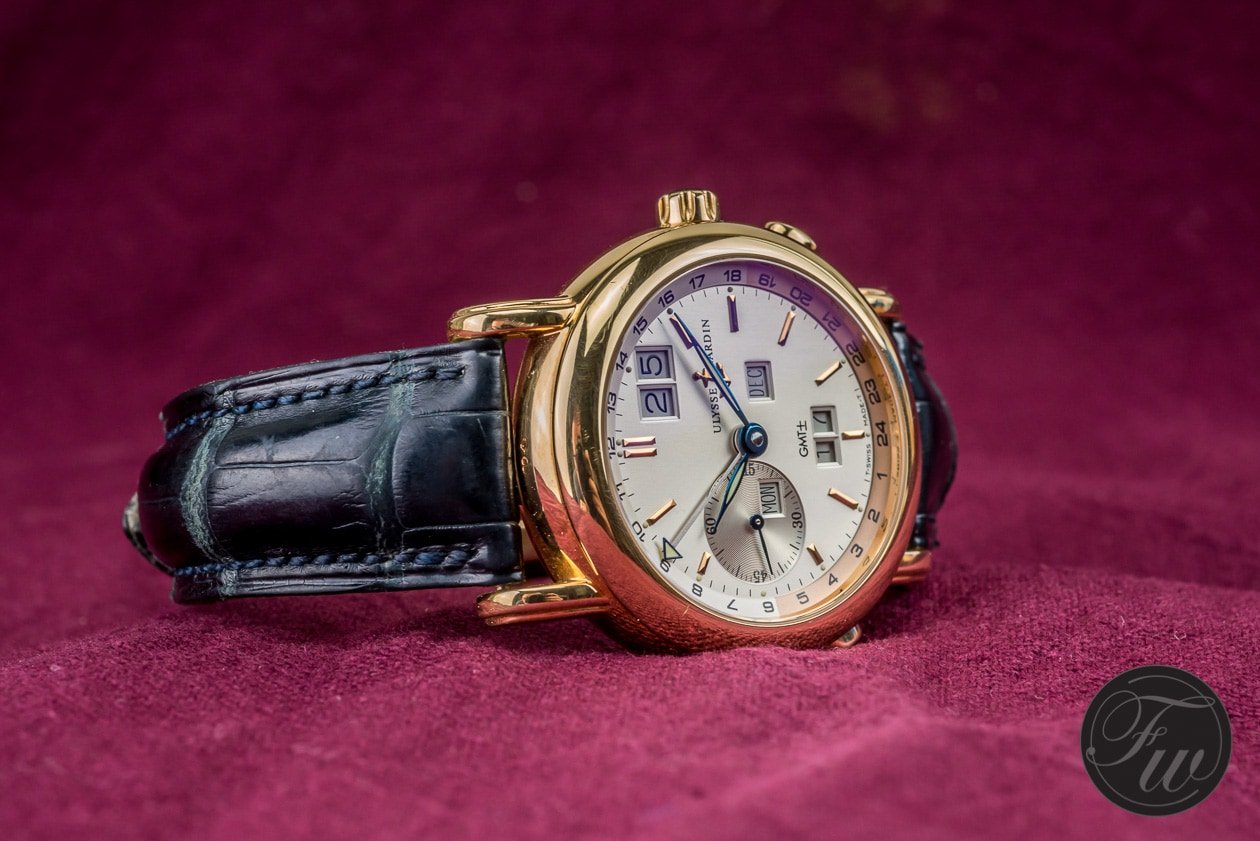 Enjoying the change of the year over and over again

When setting the time through the second position of the crown, the minute-, hour- and 24-hour hands are moving synchronized. When using the (+) and (-) buttons, however, only the 12-hour hand jumps in increments of an hour. This 12-hour hand obviously is the indication of local-time at the watch. When setting it back and forth over the 00:00 hour the calendar changes accordingly. That’s right, back and forth! The whole calendar, day, date, month and year. It’s hard to believe and beautiful to look at. This way you’re able to enjoy the change of the year from December 31st 2017, to January 1st 2018 over and over again 🙂 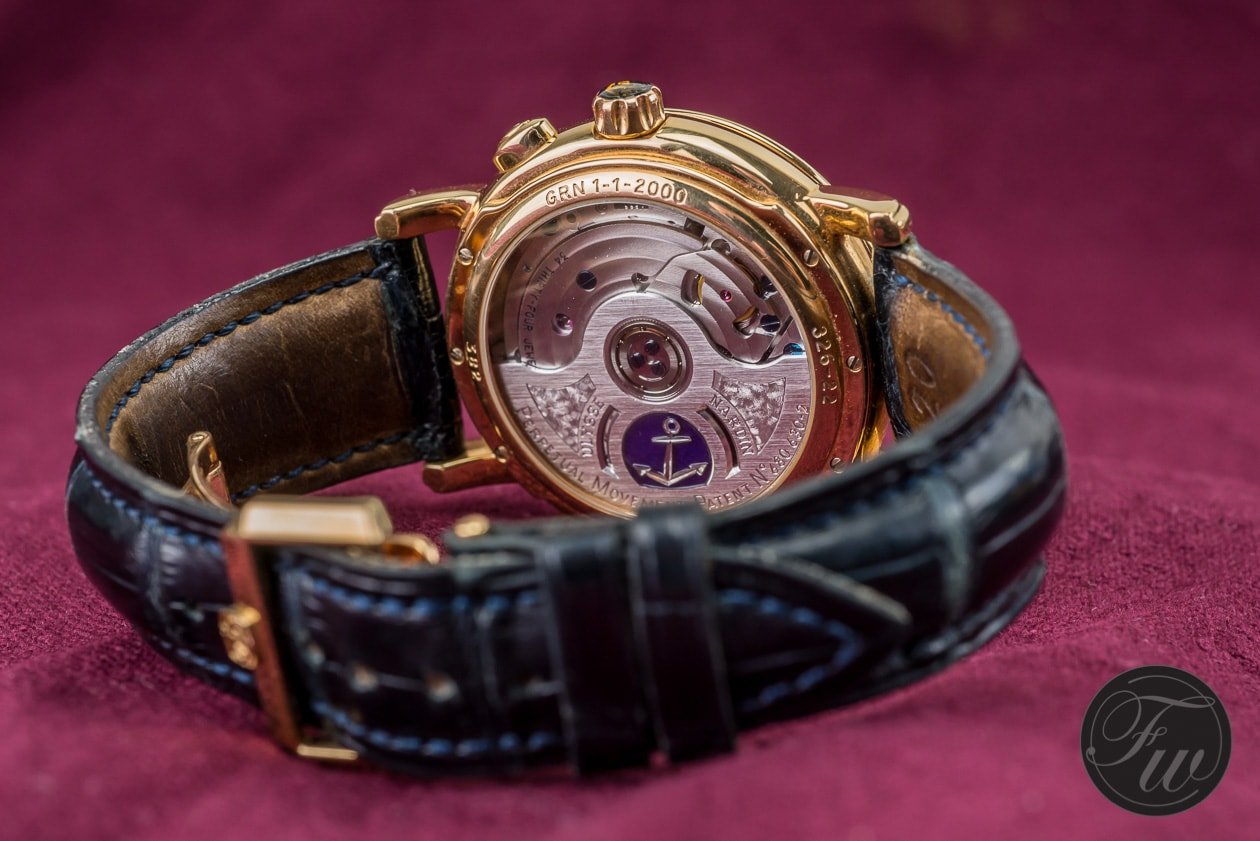 Ulysse Nardin’s reference number of the GMT ± Perpetual in 18 carats rose gold is 326-22. The watch is cased in a soft somewhat organically designed casing with a diameter of 38,5mm. A Nouvelle Lemania (now Manufacture Breguet) caliber 1354 lays at the basis of the UN-32 movement of the watch. Ludwig Oechslin’s perpetual calendar construction was filed under patent CH 680 630. The movement supplies a power reserve of 48 hours and uses 34 bearing jewels. In 1999 the original sales price of the watch was just south of US$ 30.000,=. Nowadays you might very well be able to find one for half that price. Information on the current Ulysse Nardin program can be found at www.ulysse-nardin.com.

The Ulysse Nardin GMT Perpetual on my wrist.

(+) and (-) buttons places on both sides of the casing

Hot Topics
Introducing: The New Seamaster Professional 300M 60 Years Of Bond — With A Special Animated Case Back
105 comments
Are You Still After An Omega × Swatch MoonSwatch?
84 comments
It’s Time To Invest In A Dress Watch — Our Picks From Breguet, Omega, Grand Seiko, And More
72 comments
The Rolex Waitlist Conundrum — How Much Will The Price Of Your Watch Increase While You Wait?
50 comments
The Best Omega Speedmaster Watches Of 2022
40 comments
Popular
A Question From A Reader: “Which Modern Speedmaster Is Closest To The Original Moonwatch?”
Robert-Jan Broer
14
Why Are There No Stainless Steel Rolex Watches Available?
Robert-Jan Broer
121
In-Depth – Vintage Omega Constellation Watches
Robert-Jan Broer
26