Happy Wednesday, folks! I’m pretty excited today, as one of my all-time favorite brands is releasing a brand new model to its collection. No, not a new variation, but a totally new silhouette. Joining the brand’s “Special Projects” collection, the UR-112 Aggregat is something completely new from the master of the Avant-Garde. A cursory glance suggests that the UR-112 Aggregat is the heir apparent to the brand’s now-discontinued UR-111C in terms of design. In, we’re looking at a masterpiece that has been three years in the making!

The UR-112 Aggregat is a totally new adventure for Martin Frei and Felix Baumgartner. The co-founders wanted to take on a new mechanical challenge starting with a blank canvas and a sketchbook overflowing with ideas. One that stretched their creative and technical capabilities quite unlike anything they’d produced before. All that while designing a product imbued with the brand’s quintessential DNA. Achieving even just 50% of that goal would have been nothing short of remarkable, so let’s see URWERK got on with their Mission Impossible. 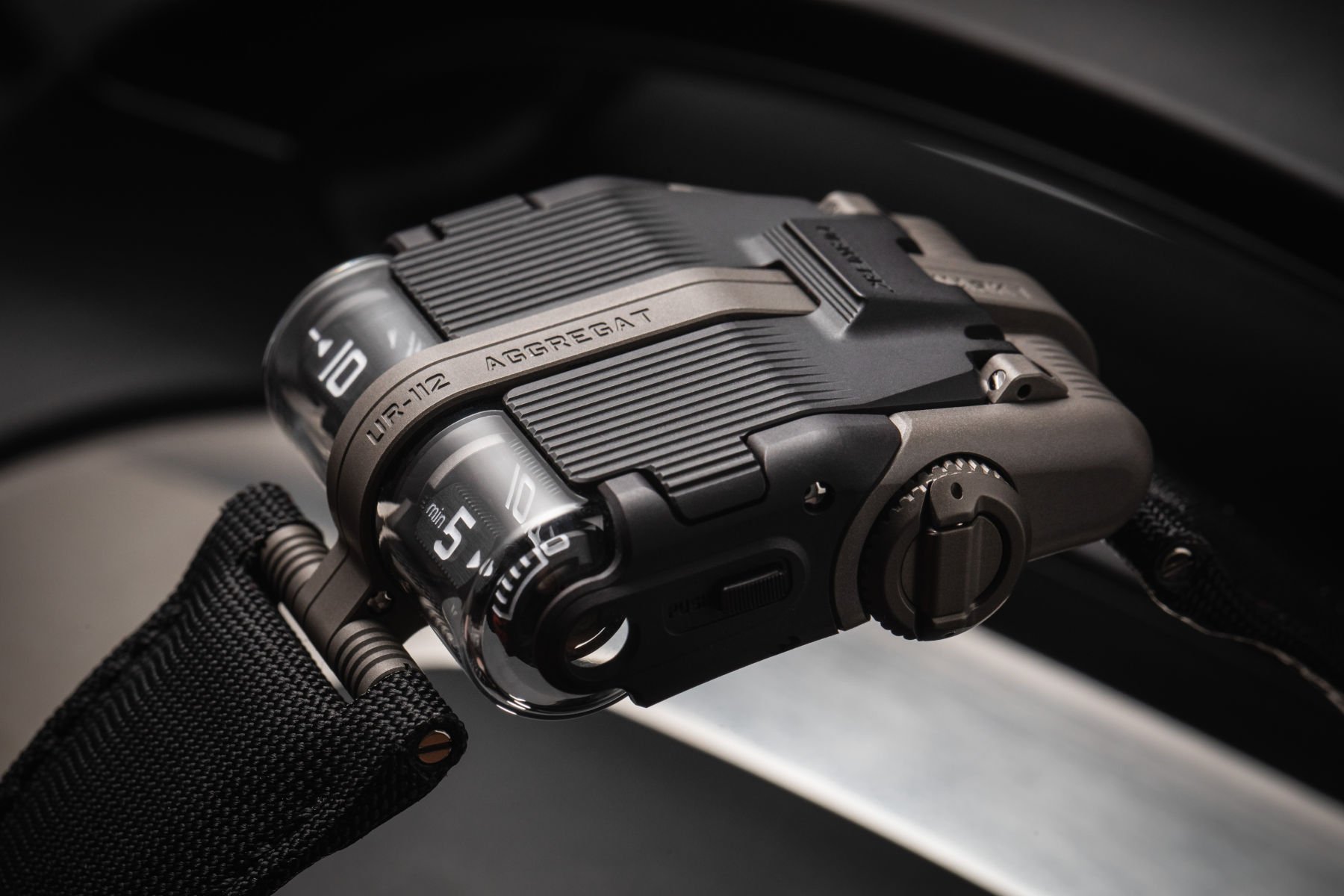 The all-new UR-112 Aggregat

URWERK has built a fearsome reputation for its avant-garde approach to watchmaking. It effortlessly blends impressive, futuristic mechanical engineering with subtle, and sometimes whimsical, inspiration. Despite subtle nods to some other watches in the brand’s incredible repertoire, it took an incredible three years to develop. Considering that URWERK spends around two years developing a new model, it goes to show quite how difficult and technically challenging the UR-112 Aggregat project was.

The natural beauty of the UR-112 Aggregat lies in the hidden complexity of its hidden mechanics. The digital display uses jump hour and jump minutes (in 5-minute increments) to offer a more relaxed view of the time we are perhaps used to. Even the seconds display is hidden away behind the watch’s grille-like titanium “hull” (a nod to the brand’s iconic UR-105, perhaps?). Upon opening the hull, you might expect to be greeted with an unobstructed view of the heart and soul of the UR-112’s complex caliber. Instead, all non-essential mechanics are hidden, with just the seconds display and a power reserve on show. 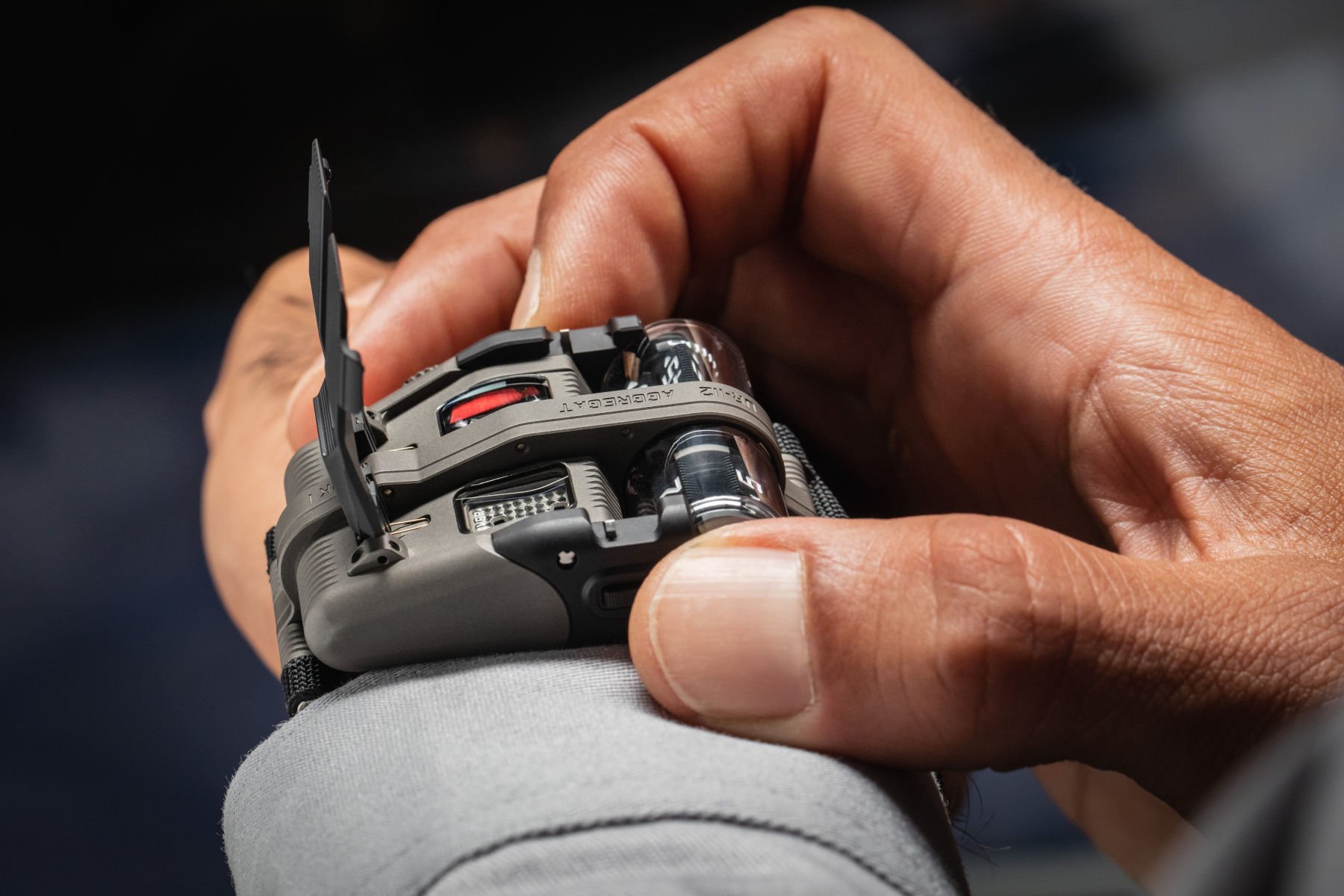 Now I’m reasonably confident that I may be looking for meaning where perhaps many others may not. When you connect with a brand in this way, it’s easier to wax lyrical and find art in its designs. So, bear with me here! A reminder that time is a man-made construct that controls every aspect of our lives. While it is very much a necessary evil, the UR-112 Aggregat reminds us that time does not have to define and rule us entirely. Instead, we should spend time appreciating the moment. Enjoy and take in what is around us. In this case, we should enjoy the watch for how it looks, not what it can do for us. 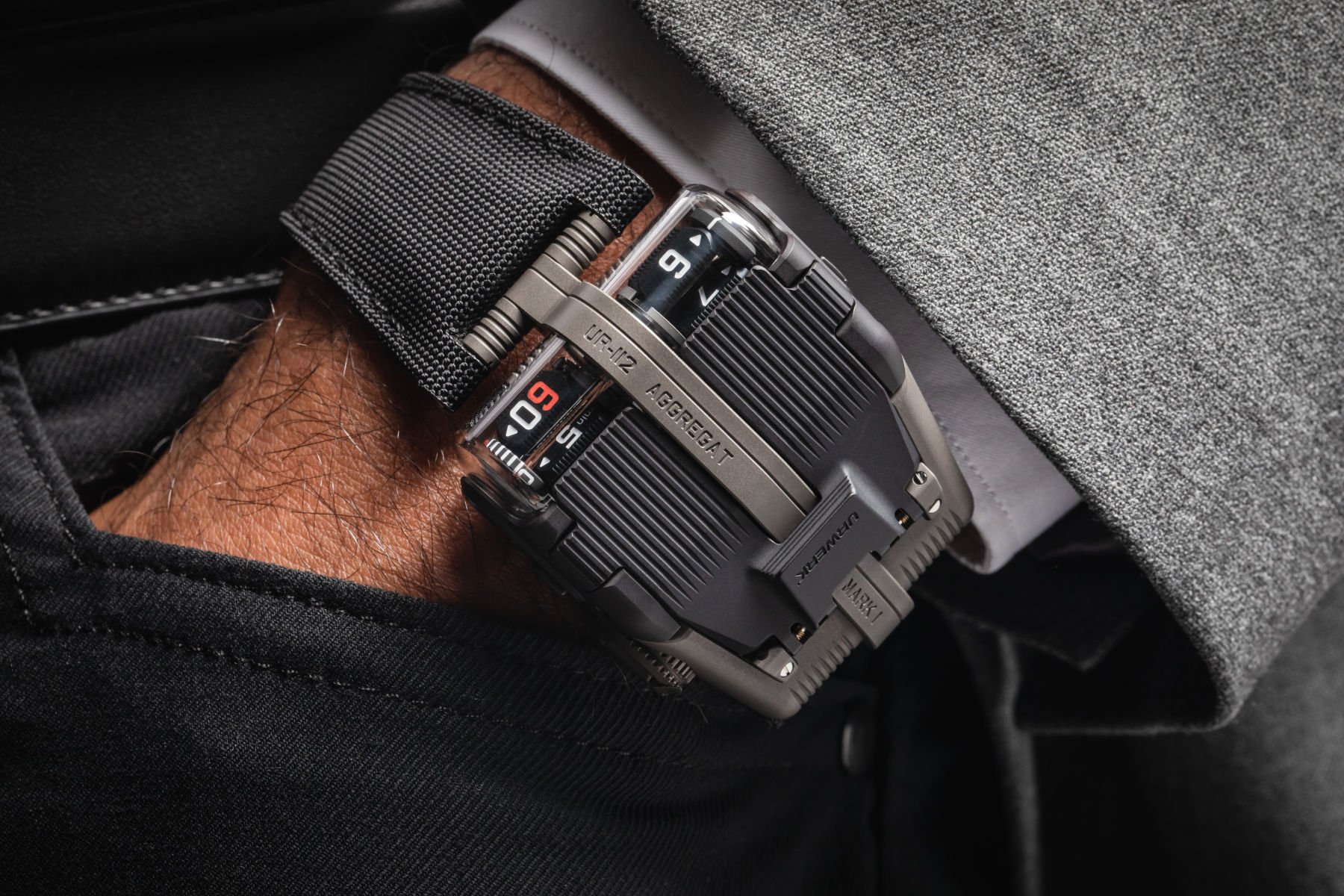 The UR-112 Aggregat’s case is somewhat stark and sobering. It’s not flashy, with high-polished surfaces. Instead, it has an anthracite body with matte black sides complemented by its functional titanium “hull”, in the same color. Subdued beauty is how I would describe it. There is a certain elegance in the dark and moody color scheme. It’s easy to describe black as a lazy choice, but the darkness paves the way to appreciate the UR-112’s shape and form.

Just look at Ad Reinhardt’s famous 1963 painting entitled “Abstract painting”. At first glance, the entire canvas seems to be a flat black surface. But, upon inspecting more closely, one will notice that the artist used more than one shade of black to create an underlying geometric structure. Looking past the color allows you to appreciate the form beneath. Maybe it’s a stretch to suggest that Reinhardt’s Abstract Painting partially inspired Martin Frei’s creative vision, but knowing that he is an art lover, it’s not impossible.

When asked about his inspirations for the UR-112, he said, “The sources of inspiration for this UR-112 are many and diffuse. The grille of the Bugatti Atlantique is the most obvious. An exceptional automobile whose contrasting spine emphasizes absolute symmetry. Some Middle Eastern influences are also vivid in my mind. The memories, the smells, the experiences during my travels nourish my imagination and are found in all my creations. Found by subtle touch.” With this in mind, it is then perhaps self-explanatory why URWERK chose the Aggregat nickname. Aggregat is the German translation of “aggregate”, meaning “a whole formed by combining several separate elements”. This project is undoubtedly an aggregate of various well-traveled inspirations and journeys of mechanical and technical reflection. 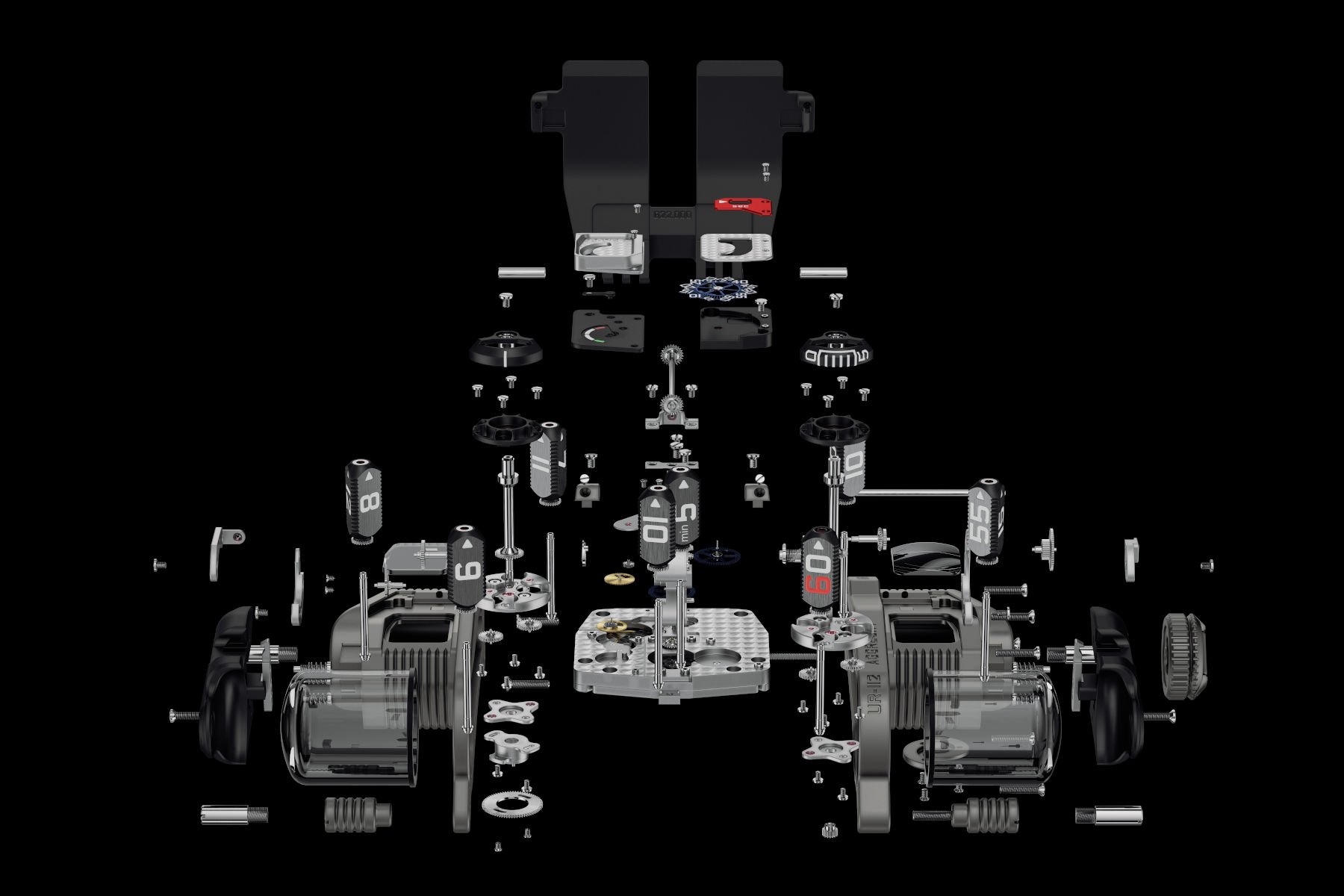 As mentioned, the UR-112 Aggregat’s movement took over three years to develop. Despite its obvious futuristic and industrial form, it is almost buglike and somewhat organic in construction too. It’s easy to break the case down into a head and abdomen. A long, thin rod connects the two sections together. This is the Cardan shaft, a central part of vital importance to the mechanism. A complex set of cogs and a succession of gears allow this axis to transmit all the energy required from the mainspring in the abdomen to display the head.

Starting with the head, here we find the hour and the minutes. Both use revolving triangular prisms attached to flying carousels to digitally display the time through “jumping” increments. The numerals on each of the eight triangular prisms are engraved and filled with Super-LumiNova. Interestingly, the operation of the jumping hours display is driven by the advance of the minutes. At the 60th minute, the force accumulated during those last 3600 seconds is released to change the time to the next hour. 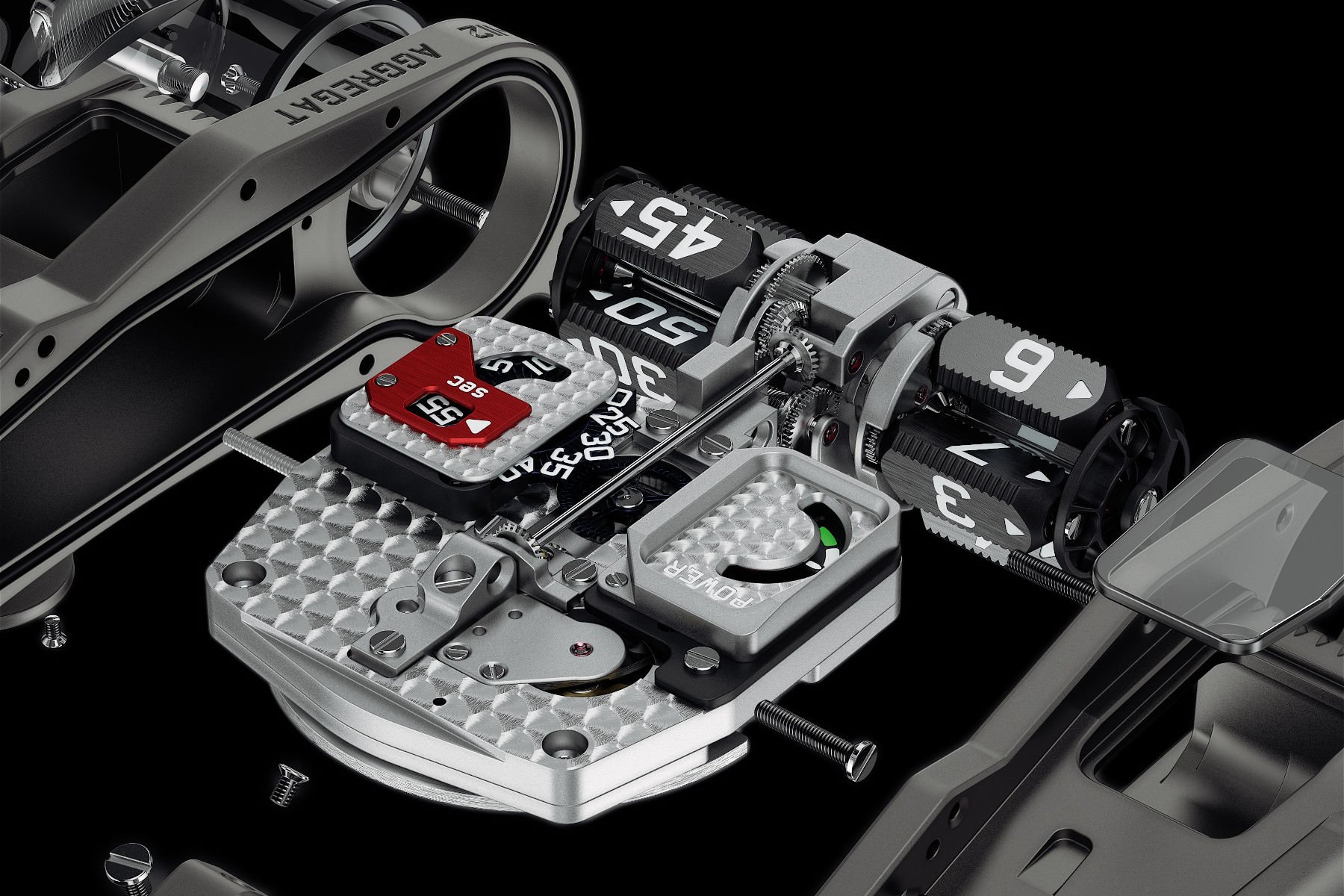 A mechanically impressive caliber resides within

The UR-112 Aggregat’s movement nestles inside a hunter case with the aforementioned hinged titanium hull. Pressing the pushers on either side of the case unlocks the hull allowing it to spring open, revealing the elaborate digital seconds display. Tiny numerals, etched onto hair-thin silicon wafer disks, slide in and out of view under a magnifying lens. Beside it sits the only analog display of the UR-112, a 48-hour power-reserve indicator.

To help add some further credence to just how technically impressive the new caliber is, Felix Baumgartner explained: “From a single source of energy, we power all displays and mechanisms of the UR-112. This force is distributed sparingly, with some even “recycled” so that from the digital second at the top of the dial to the dragging minutes and the jumping hours at the opposite extreme, each display receives precisely its required dose of energy with none wasted.” 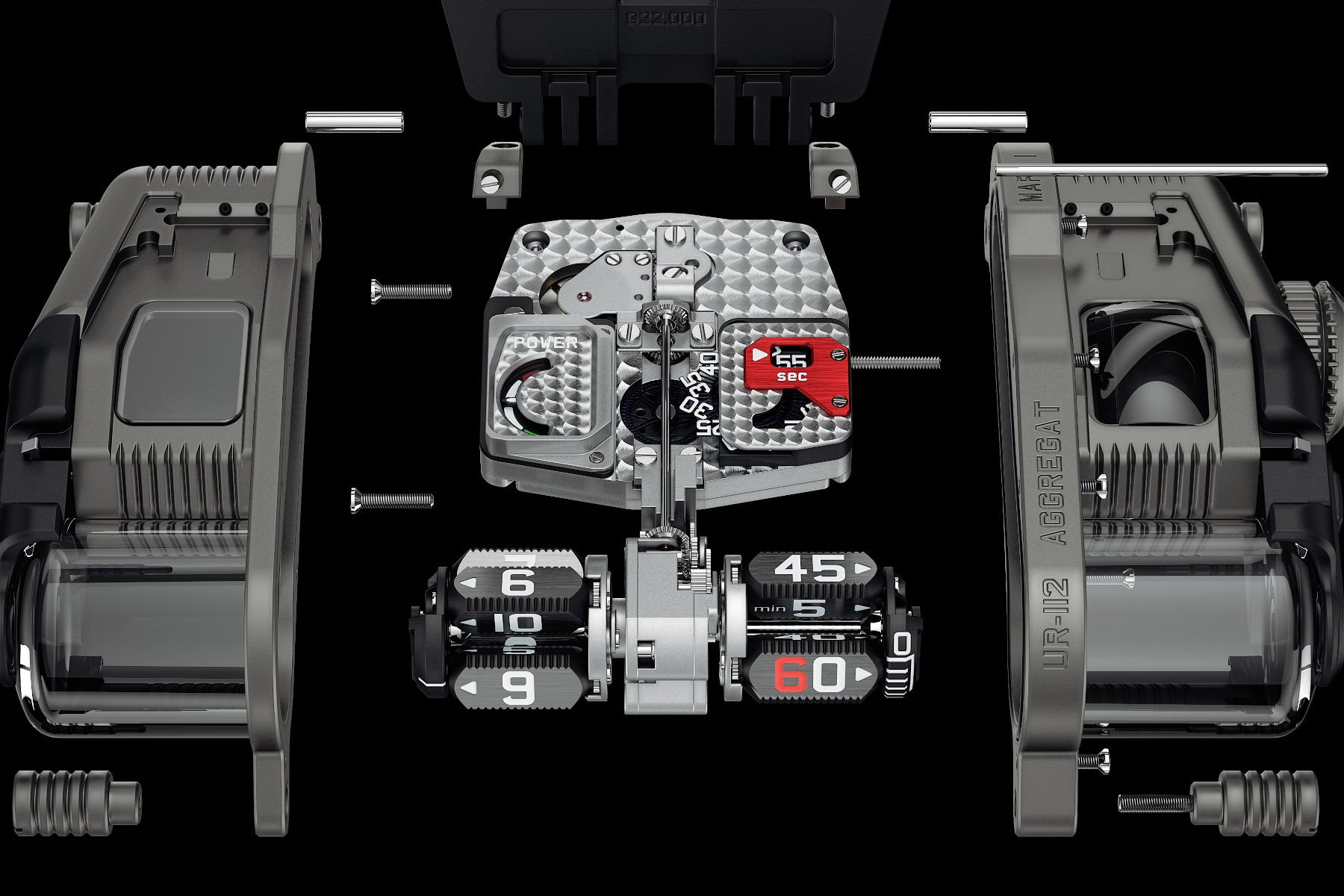 As a non-watchmaker, I realize that I cannot truly appreciate the level of micromechanical engineering required to achieve such a complex and beautifully functional movement. That said, the mystery of the finer details only adds to the intrigue and awe of the UR-112 Aggregat. It’s hard to describe this watch as anything less than a superb example of Avante-Garde Haute horology. With the UR-112 Aggregat, URWERK only strengthens my love and appreciation for independent watchmaking.

Hot Topics
Introducing: The New Seamaster Professional 300M 60 Years Of Bond — With A Special Animated Case Back
105 comments
Are You Still After An Omega × Swatch MoonSwatch?
84 comments
It’s Time To Invest In A Dress Watch — Our Picks From Breguet, Omega, Grand Seiko, And More
72 comments
The Rolex Waitlist Conundrum — How Much Will The Price Of Your Watch Increase While You Wait?
50 comments
The Best Omega Speedmaster Watches Of 2022
40 comments
Popular
Hands-On With The Seiko Prospex Dawn Grey Series
Robert-Jan Broer
12
Rolex Submariner Hulk versus Seiko SLA019 : Shades of Green
Michael Stockton
27
New Hamilton Intra-Matic Auto Chrono – An Introduction (with live pictures)
Balazs Ferenczi
12