The Louvre is probably the most famous museum in the world. Vacheron Constantin has been a partner of the Parisian museum since 2019, and after an intense collaboration with its curators and historians, the brand now releases four very artistic Métiers d’Art timepieces. The starting point of the watches are symbols of four different eras. These artistic masterpieces are at the center of an exceptional watchmaking show staged by skilled craft makers. The Louvre and Vacheron Constantin reinterpreted iconic symbols from Ancient Egypt (2035-1680 BC), the Persian Empire of the Achaemenids (559 – 330 BC), the Hellenistic Greece of the Antigonid dynasty (277 – 168 BC), and the Roman Empire of the Julio-Claudians (27 BC – 68 AD), and now present these interpretations in a historical watch quartet.

The four new Métiers d’Art timepieces are a tribute to antiquity, the period in time that is the foundation of our scientific and cultural foundation. We owe the invention of writing, the birth of democracy, philosophical thought, monumental architecture, and timeless artistic achievements to our antique ancestors. It is by no means a coincidence that the quartet of timepieces that show the highest level of artistic and artisanal excellence pay tribute to four very significant periods in time. The collection starts with a sphinx from Ancient Egypt, is followed by a lion from the times of the Persian Empire of Darius the Great, continues with the statue of the Victoire de Samothrace from the Hellenistic period of Ancient Greece, and ends with a bust of Augustus, the first Roman emperor. The craftspeople at “VC” managed to meticulously reproduce the expressive ancient objects on dials less than 40mm in diameter. 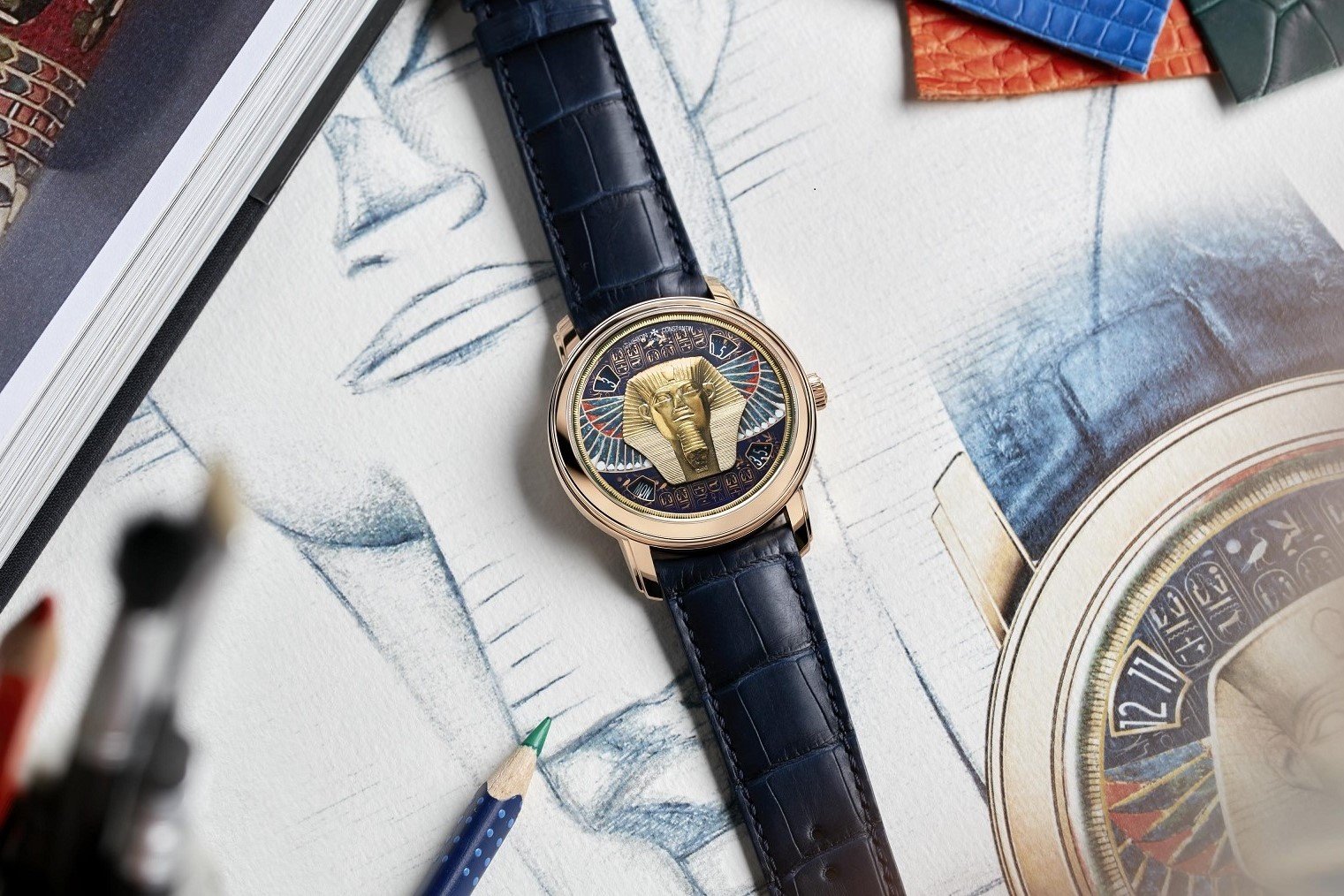 To bring the four chosen antique symbols to life, Vacheron Constantin put its master artisans in the fields of enameling, stone marquetry, engraving, and stone micro-mosaics to the test. They seem to have passed with flying colors, as the miniature face of the sphinx and paintings from an Egyptian coffin look very dynamic and realistic. The original Great Sphinx of Tanis — the capital city of the kings of the 21st and 22nd dynasties — measures 1.83 meters in height and is 4.80 meters long. It is actually one of the largest sphinxes preserved outside Egypt, and it came to the Louvre in 1826. 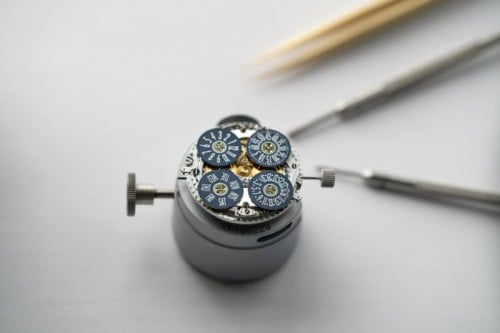 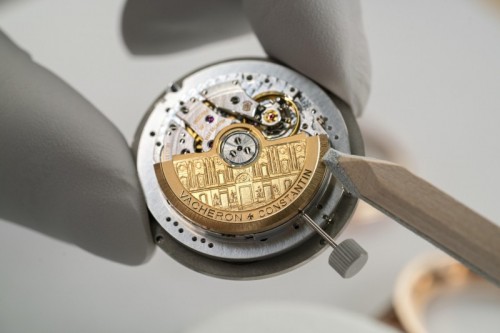 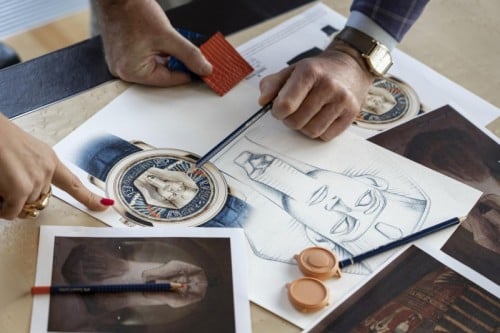 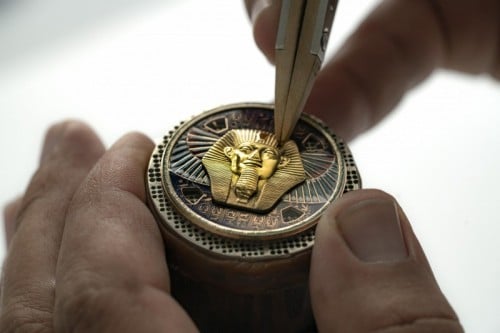 The 42 × 12.9mm pink gold timepiece shows a carved gold appliqué representing the head of the sphinx. One of the most challenging features of the sphinx was the reproduction of the large false beard within such a small space. The master artisan had to work in relief using the pounced ornament technique, removing material despite the thinness of the plate. After that, the artisan accentuated the depth by patinating the material with a blowtorch and then by hand again. The main dial, done in enamel, is also incredibly delicate. Its deep color (a mixture of blue and black enamels) is obtained after six firings in the kiln. 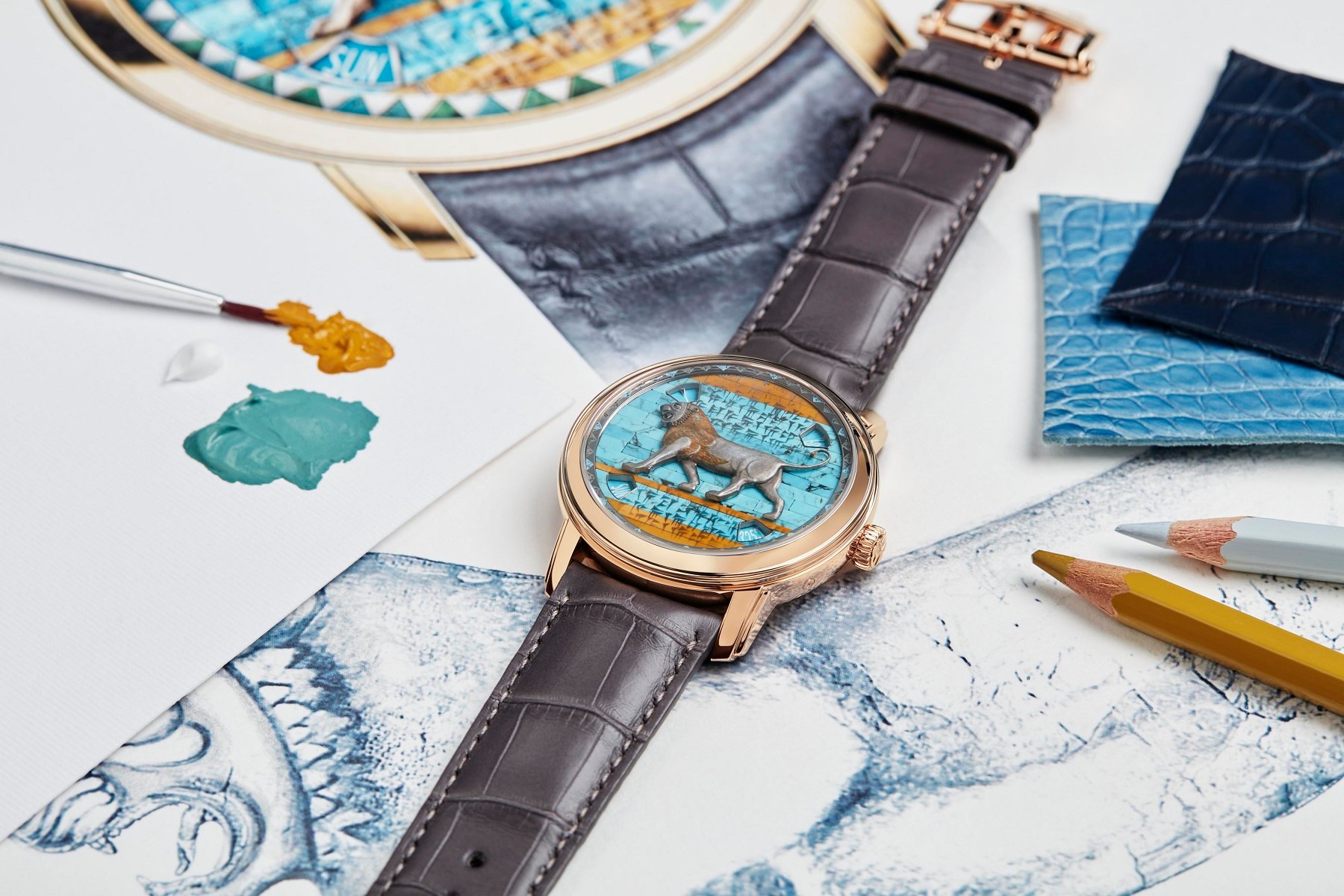 The original Frieze of Lions is one of the few decorative elements of the Palace of Darius in Susa that was found on-site. The frieze was made of siliceous glazed bricks that were bound with lime mortar, and the regal lion was a symbol of King Darius’s power. To mimic the original material, VC opted for stone marquetry. The artisans even managed to recreate the original realistic look by using stone fragments with veins. Such stones are inherently more fragile than those without. Given the large amount of waste in the cutting of the stones, three orders were placed to finally obtain the 69 components of this marquetry. 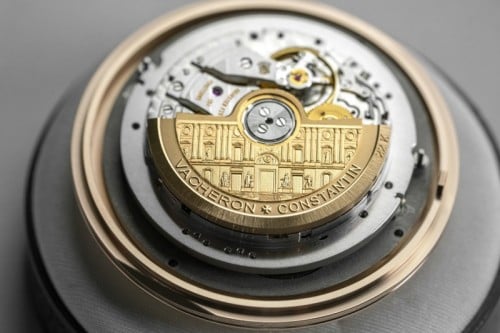 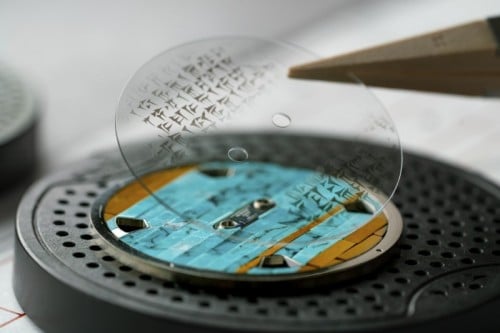 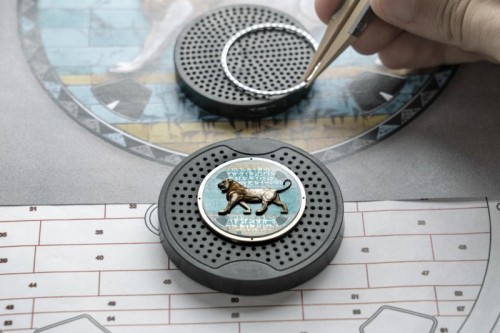 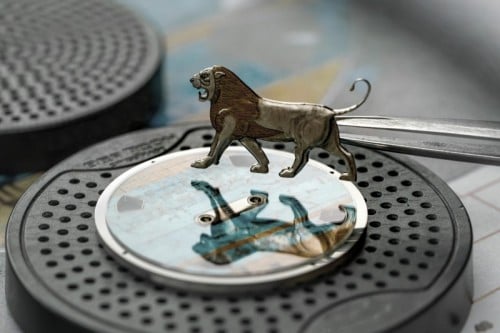 Interestingly, the dial of the watch is much brighter than the original frieze. Vacheron Constantin did that on purpose. The lighter color of the stones reproduces the appearance of the frieze as it was before it faded through the millennia. No faux patina here, folks! 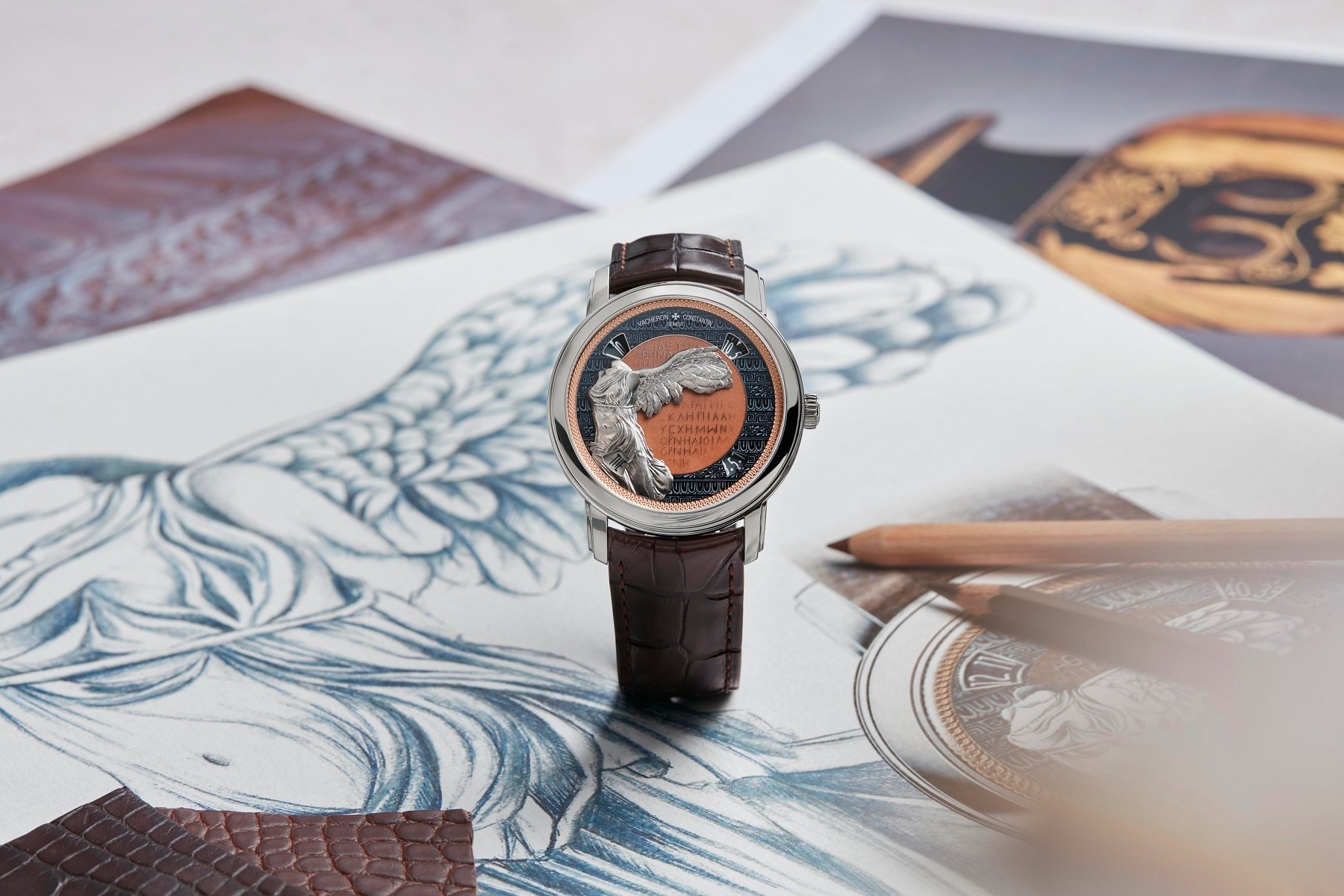 Let’s talk about ancient Nikes. I mean Niké — that’s the Greek word — or the Victoire de Samothrace that is on display at the Louvre. The sculpture, which depicts a goddess standing on the bow of a ship, is an unrivaled masterpiece of Hellenistic sculpture. Both its construction and the carving of the white Parian marble show incredible levels of artistic expertise. The miniature of the sculpture, created by an unknown maker, is also a masterpiece. Just look at how the engraver managed to recreate the dynamic drapery of the statue. It’s almost as if it’s flowing in the sea breeze. The artisan even managed to miniaturize the deep folds of fabric falling between the figure’s legs. 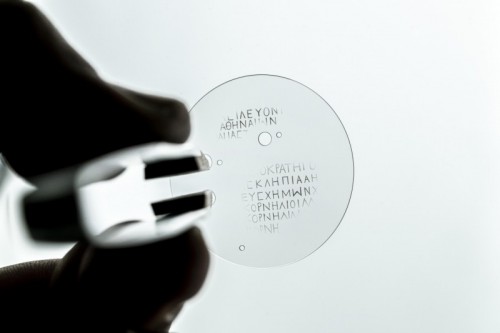 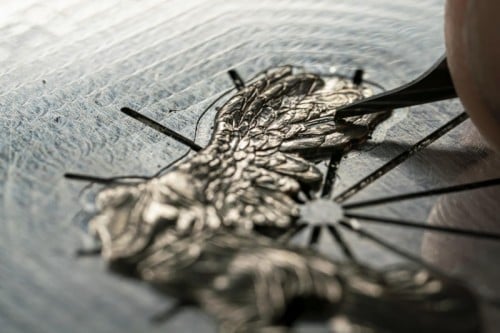 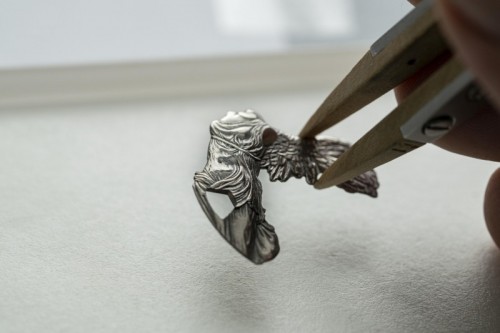 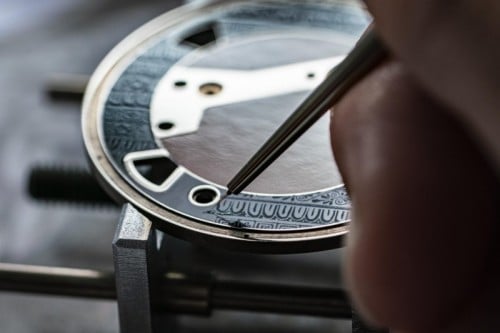 The center of the main dial shows brown enamel. Nothing special? Well, it is actually very special. Did you know that brown is a very difficult color to achieve with enameling? I didn’t. Anyway, it required a mixture of rare and out-of-production enamels. And on top of that, it also takes six firings in the kiln. The periphery of the dial features grisaille enameling depicting the decorative friezes taken from two Greek vases. These ceramic objects showing red-painted geometrical figures feature different ornaments with foliage or geometric motifs. 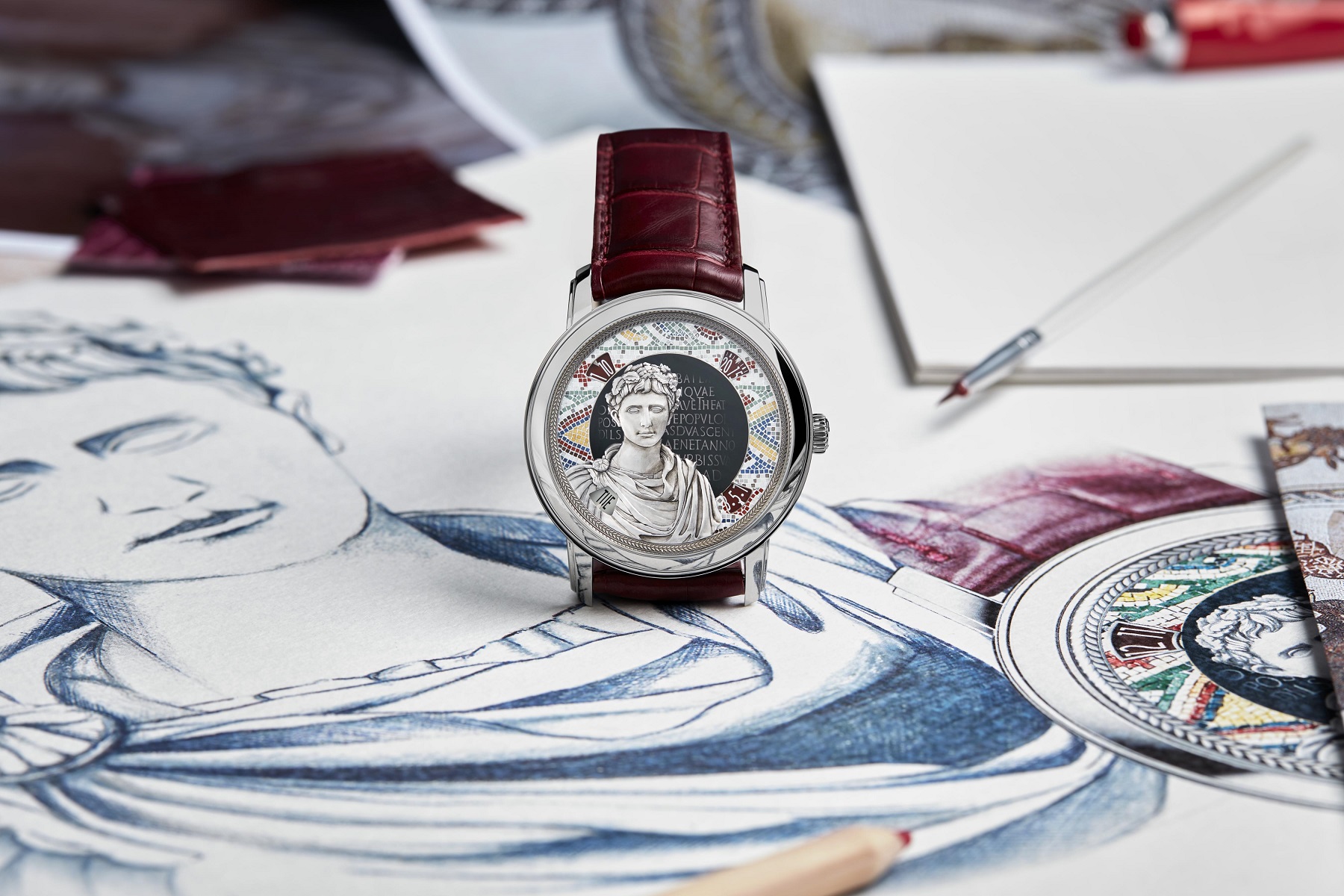 What you see on the dial of the watch is a man in his fifties. It is a gold carving of emperor Augustus. He looks quite striking for a man of his age, with his curling locks held by the oak crown. The cape might be a bit antique, but it does look good on him and in the timepiece. The center of the dial shows blue-green enameling, while the periphery treats you to a stone micro-mosaic. It is the exact same pattern as the famous fourth-century mosaic found in Lod, Israel. 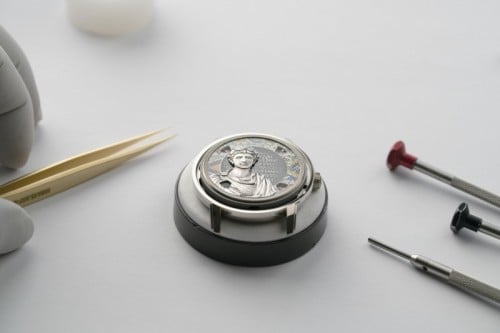 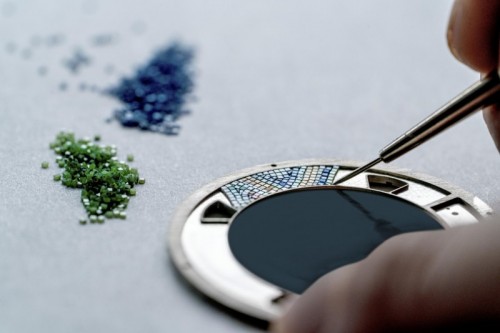 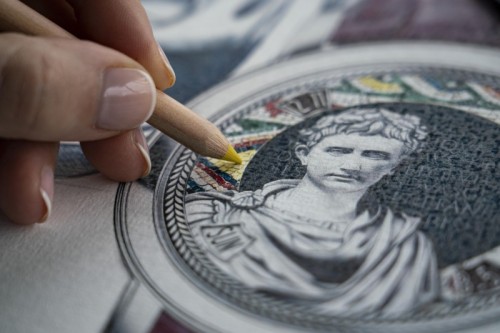 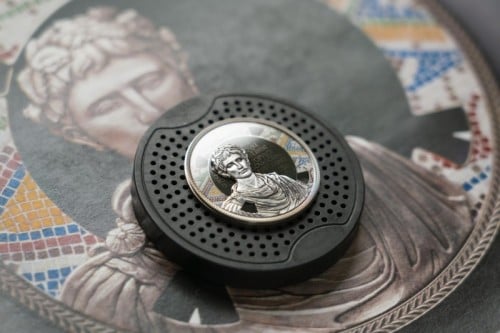 The tricky thing about the mosaic was that it left no room for error. If any of the tiny stone fragments were mispositioned, it would have required re-enameling the Grand Feu base dial. It took no less than seven different types of stones and 660 pieces in total to compose this Roman micro-mosaic. Would you like to know which seven stones? Here we go: quartzite, cacholong, dumortierite, mochaite, red jasper, grossular, and red aventurine. The result is spectacular in a miniature way.

These four limited-edition watches are so extravagant, extraordinary, and exquisite, it will take exuberant people to wear them well. They’re definitely not as easy to like and wear as the recently introduced Les Historiques 222, but they are just as much a part of the Vacheron Constantin’s heritage. And that’s what I appreciate most about VC — its tradition of doing artistic, daring, and non-conventional watches. The Métiers d’Art Tribute To Great Civilizations timepieces sure are anything but conventional. 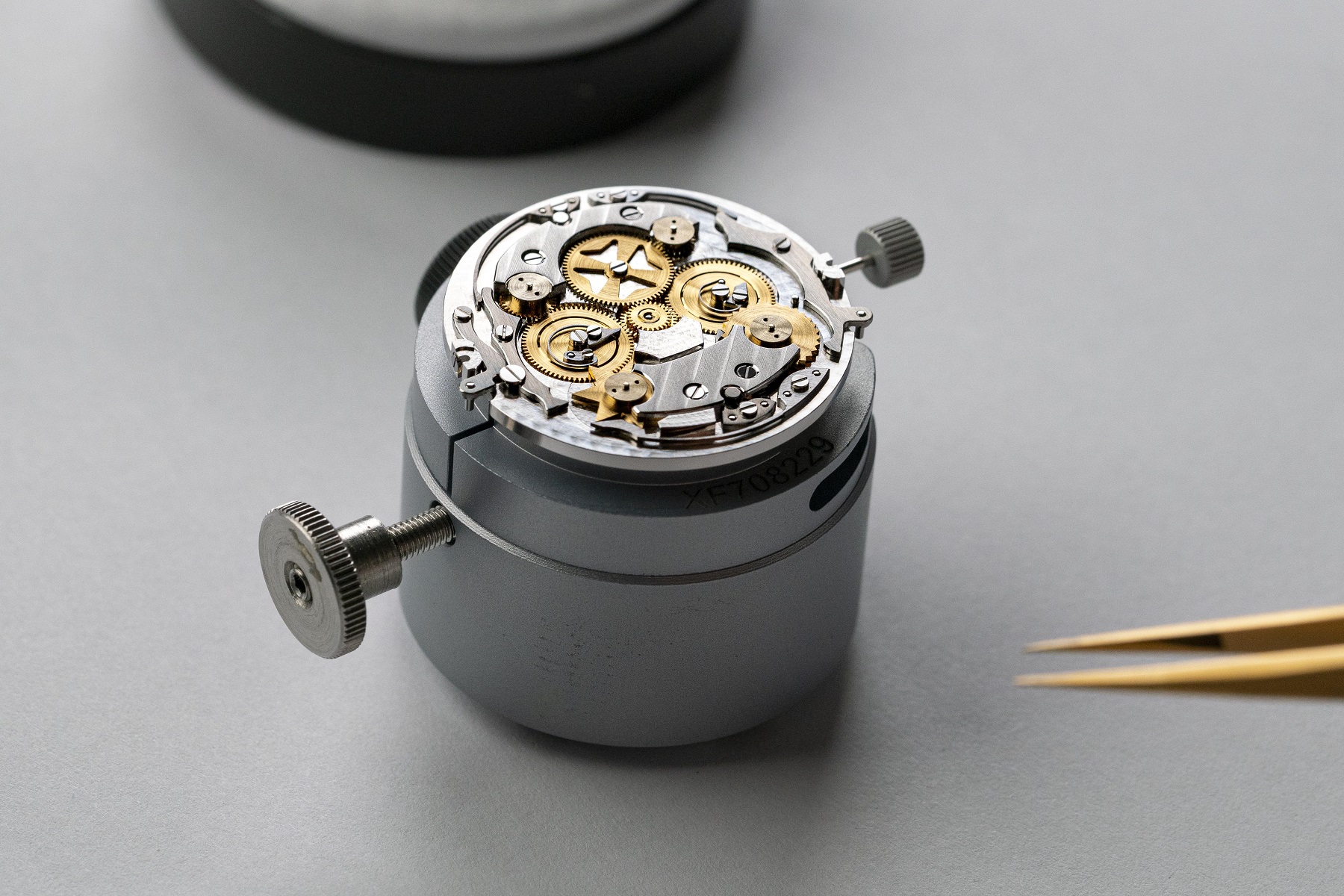 What’s inside these great civilizations?

To power the timepieces in the Métiers d’Art Tribute To Great Civilizations series, Vacheron Constantin has chosen its self-winding in-house caliber 2460 G4/2. Any hands that would disturb the artistic dials are absent. Instead, four discs indicate the hours, minutes, day, and date. On the back of the 237-component 4Hz movement, the oscillating weight shows a depiction. What you see is based on an 18th-century lithograph of the east facade of the Louvre. The matrix of the design was hand-sculpted and then used to stamp the twenty oscillating weights composing the series.

These four watches are limited to five pieces each and prices are available on request only. For more info, please visit the official Vacheron Constantin website. And to learn more about the four ancient art pieces the Métiers d’Art timepieces are based on, you could visit the official website of the Louvre.