Blue is a dial colour that Vacheron Constantin always associated with steel watches, as it has this cold look to it. At least, according to their Style & Heritage Director, Christian Selmoni. That’s what he told the crowd in a short but interesting panel talk with Laurent Perves (Chief Marketing Officer Vacheron Constantin), Patrick Graf (Chief Commercial Officer Bucherer) and Ben Clymer (CEO Hodinkee). Patrick Graf was delighted to introduce their latest Blue Editions cooperation, this time with Vacheron Constantin. In total, Bucherer did 21 collaborations with 13 different watch manufacturers. We covered previous editions here and here, for example.

On Wednesday 26th, I was invited by Bucherer to come to Paris and witness the introduction of the new Vacheron Constantin Bucherer Blue Editions. In the beautiful and well-known Hôtel de Crillon in Paris, the aforementioned people introduced the three new Vacheron Constantin Bucherer Blue Editions watches. Three Vacheron Constantin Traditionnelle models, one for ladies, one that can be worn by men and women (38mm) and a very exclusive 42mm Tourbillon with 14-days of power reserve. All three watches carry the Poinçon de Genève emblem, a very high standard for fine watchmaking.

Without further ado, let’s have a look at all three watches.

As written above, the smallest size of the pack is this beautiful-looking 33mm pink gold Vacheron Constantin Traditionnelle Small Model, with a diamond-set bezel. This bezel consists of 54 diamonds adding up to 0.87 carats in total. As you can see the pink gold combines perfectly with the deep blue Blue Editions colour, a very well-made decision by Vacheron Constantin (and Bucherer). It is actually a warm combination, and not cold at all. Which it indeed would be, if it was a white gold or platinum watch. 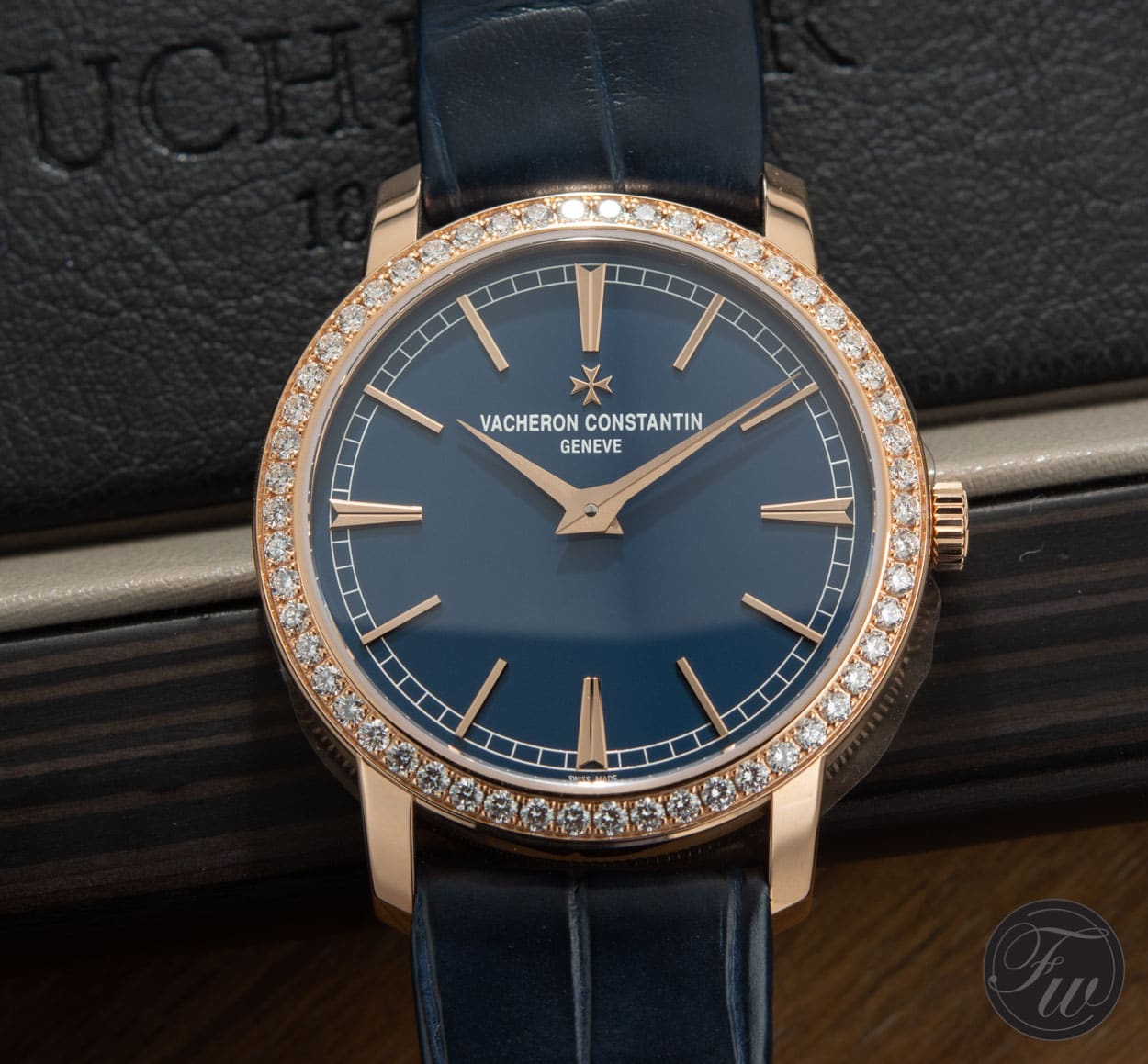 The movement for this 33mm watch is a hand-wound calibre 1400, consisting of 98 parts and 20 jewels. Calibre 1400 has a power reserve of 40 hours. It is a very classic looking ladies watch and relatively thin. Attached to it is this blue alligator strap that perfectly matches the blue of the dial. The blue dial is very clean looking, and there (luckily) not much text on the dial beside the Vacheron Constantin logo and Maltese cross. Pink gold dauphine style hands and beautifully cut hour markers give a nice contrast with the dial. The retail price for this watch is 30.000CHF.

With a 38mm diameter, this Vacheron Traditionnelle Bucherer Blue Editions can be easily worn by men and women. A very nice and thin automatic watch, in pink gold with blue dial. The dial comes to life a bit more, due to the running seconds hand at 9 o’clock. At 3 o’clock, there’s a date aperture with a nice pink gold frame around it. The date disc is also in blue, which is not best for contrast, but it does look very good. Also here we find the pink gold dauphin shaped hands, pink gold applied numerals and the printed railway track minute circle. 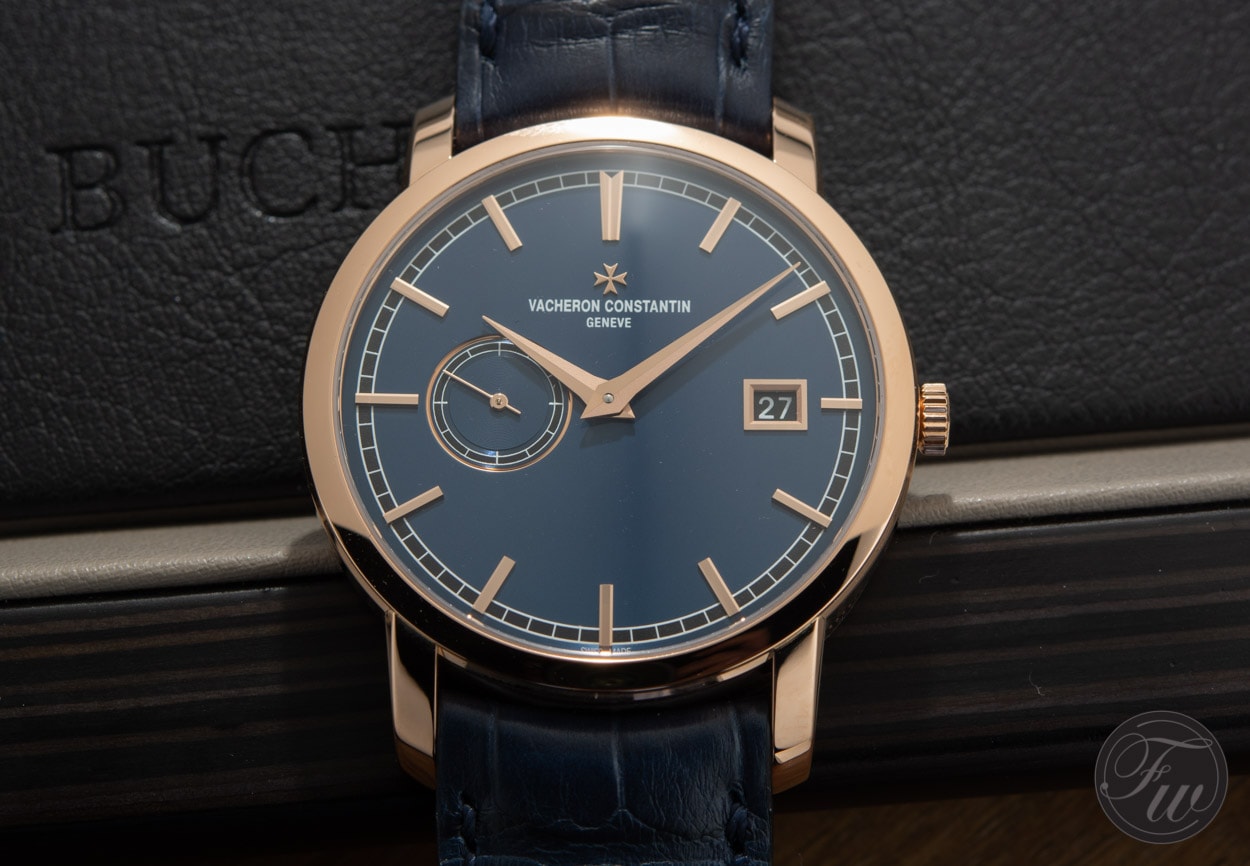 The Vacheron Constantin calibre 2455 movement has been fitted to this Traditionnelle Bucherer Blue Editions model, which is an in-house manufactured movement. It consists of 194 pieces and 27 jewels. Just like the calibre 1400 movement of the ladies’ version, the power reserve is 40 hours.

As you can see, the movement is a feast for the eyes. A beautifully decorated gold rotor and perfectly finished movement bridges underneath. As you can see in the photo below, the Geneva hallmark is on the balance-wheel bridge. 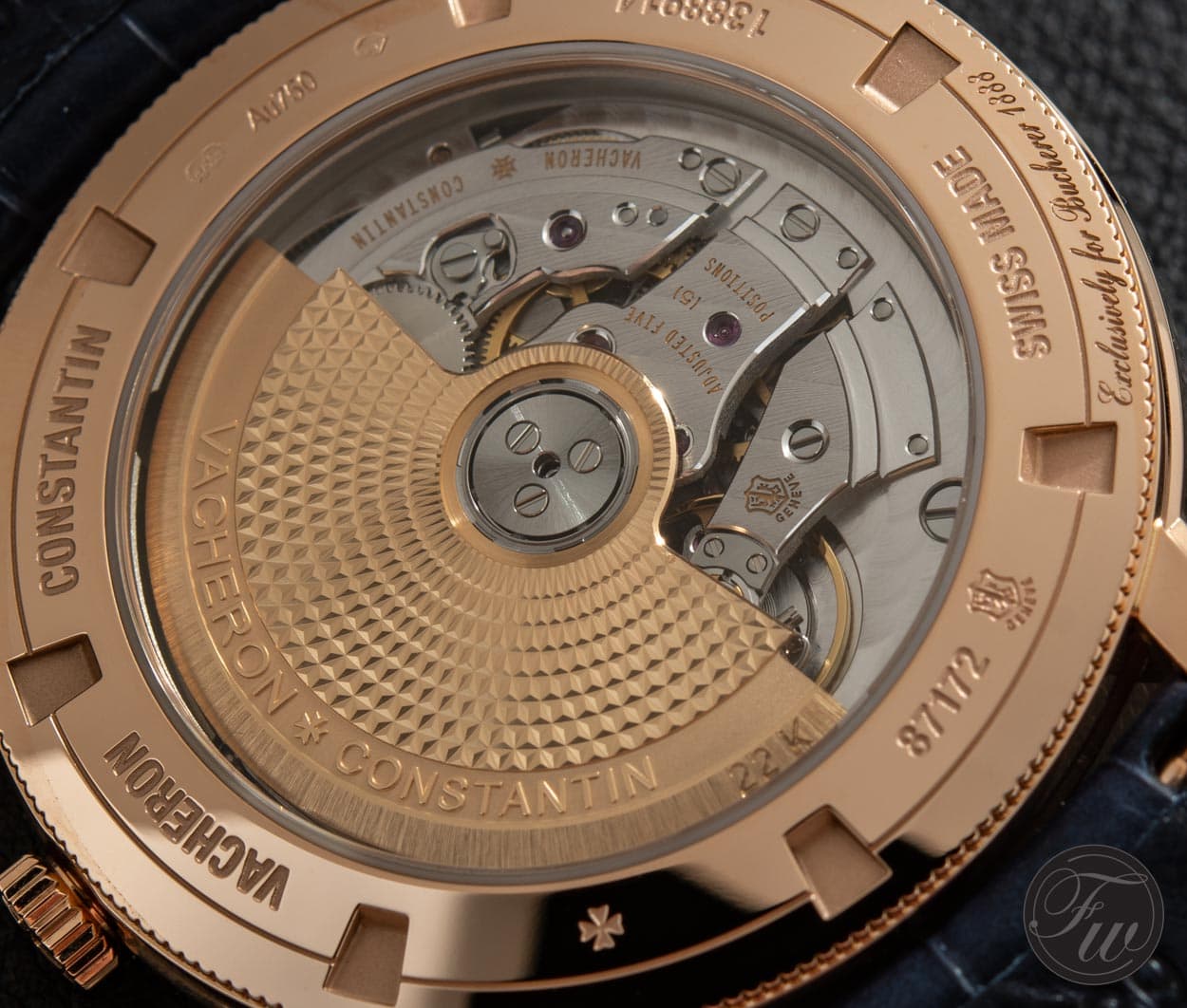 Last but certainly not least, the heavy-hitter of the Traditionnelle Bucherer Blue Editions is this Tourbillon version with a 14-day power reserve. This watch was kept for last during the introduction, of course.

As you can see below, the tourbillon has the shape of the Maltese cross. A sleek gold hand is indicating the seconds on top of the tourbillon. At 12 o’clock, there is the power reserve indicator that goes all the way up to 14-days. The centre dauphin shaped hands indicate hours and minutes, of course. Just like the other two watches, the blue opaline dial looks stunning in combination with the pink gold case, hour markers and hands. 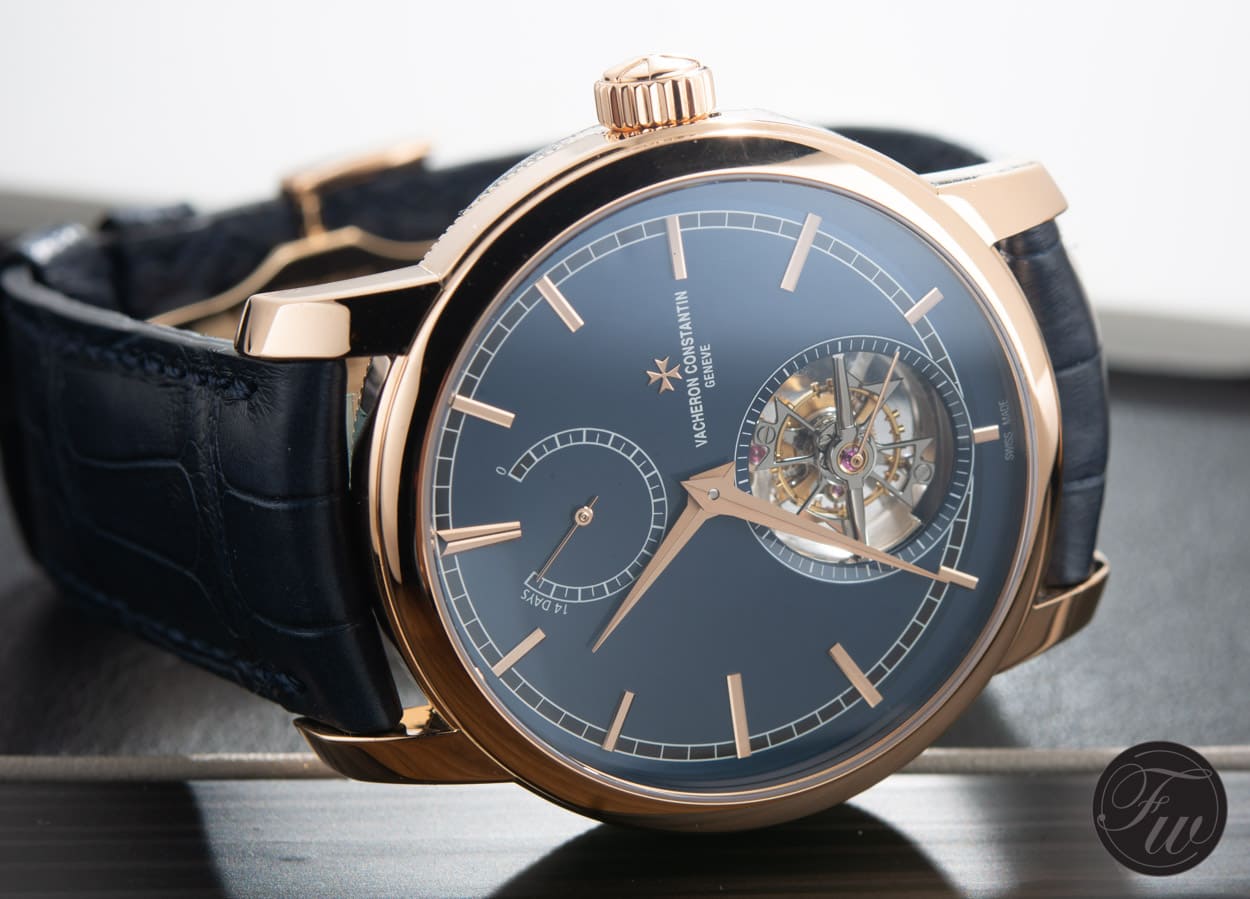 A 42mm pink gold case that houses VC calibre 2260, an in-house developed movement that consists of 231 components and 31 jewels. The power reserve is a whopping 336 hours, which equals 14 days. It has four barrels mounted in pairs and together they unwind four times more slowly than a single barrel. 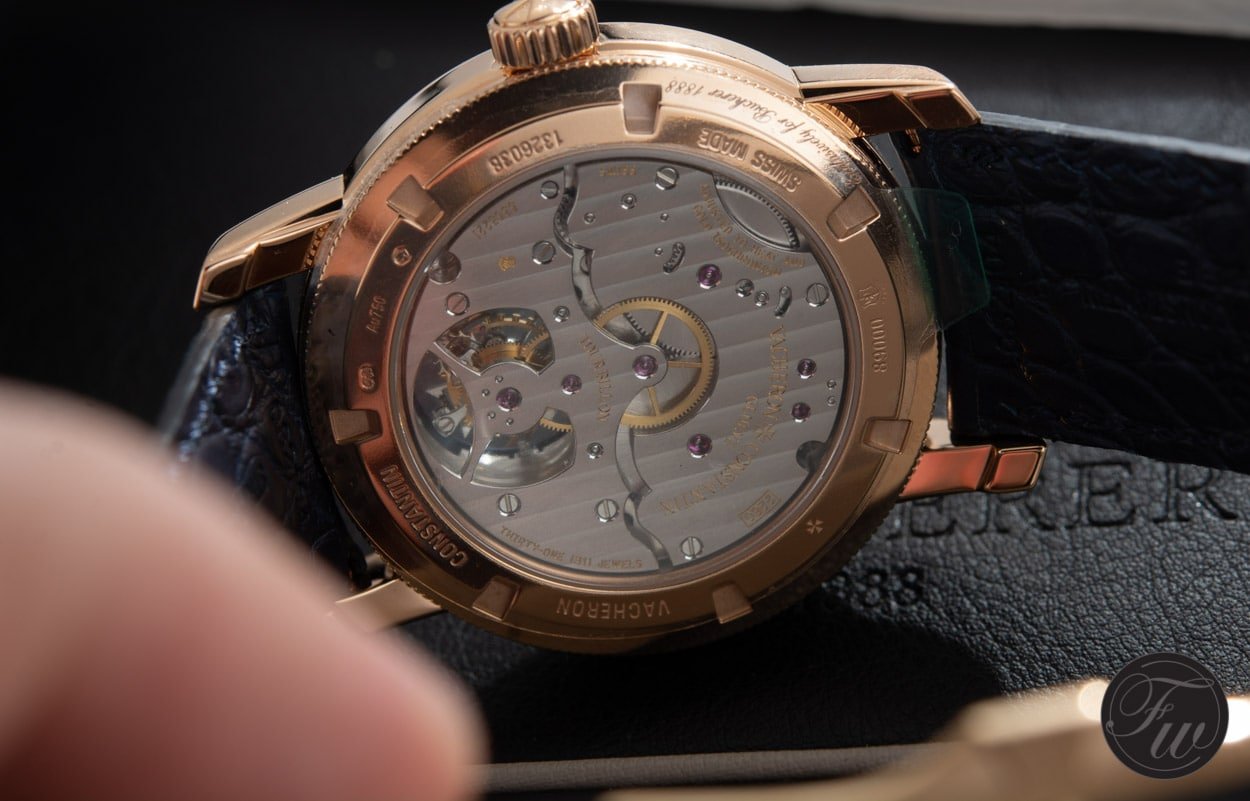 The Vacheron Constantin Traditionnelle Bucherer Blue Editions 14-day Tourbillon is, of course, a bit thicker than the other two watches. The hand-wound calibre 2260 movement consists of more parts and houses the four barrels. This surely takes up some space.

The price of this 14-day Tourbillon model is 282.000CHF and it comes with a pink gold folding clasp. 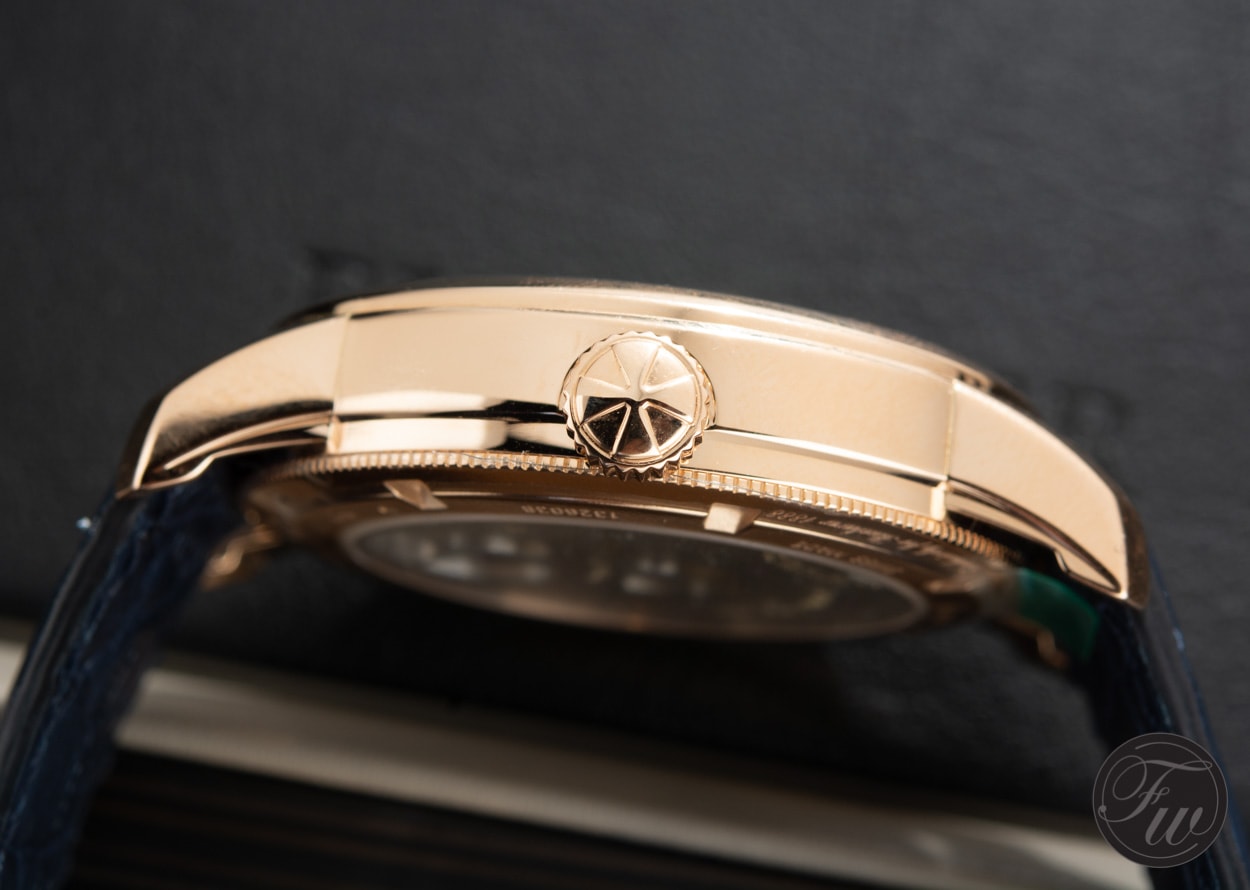 I find the Traditionnelle collection to be a very good choice for a Bucherer Blue Editions edition. At first, I was somewhat afraid that they would have picked the FiftySix collection, which happens to be a model I find not very convincing, but that’s a topic for another time. So seeing the Vacheron Constantin Traditionnelle being used for the Bucherer Blue Editions made me happy. Beautiful round sleek cases and the blue opaline dials really make them pop. I slightly wondered why Vacheron Constantin stuck to the more traditional dial colours, perhaps they now realize this as well. Although the 14-Day Tourbillon is the cream of the crop, I prefer the 38mm Traditionnelle in all honesty. A perfectly sized dress watch that even looked stunning on my relative big wrists (images can be seen on our Instagram feed). The ladies watch is interesting as well, although it does slightly rely on the general thought that women prefer small watches with diamonds. Perhaps some do, Bucherer and Vacheron Constantin probably have sales numbers to back this up, but I am also wondering how many women will instead opt for the 38mm version. That could be an interesting thing to monitor or measure for them. 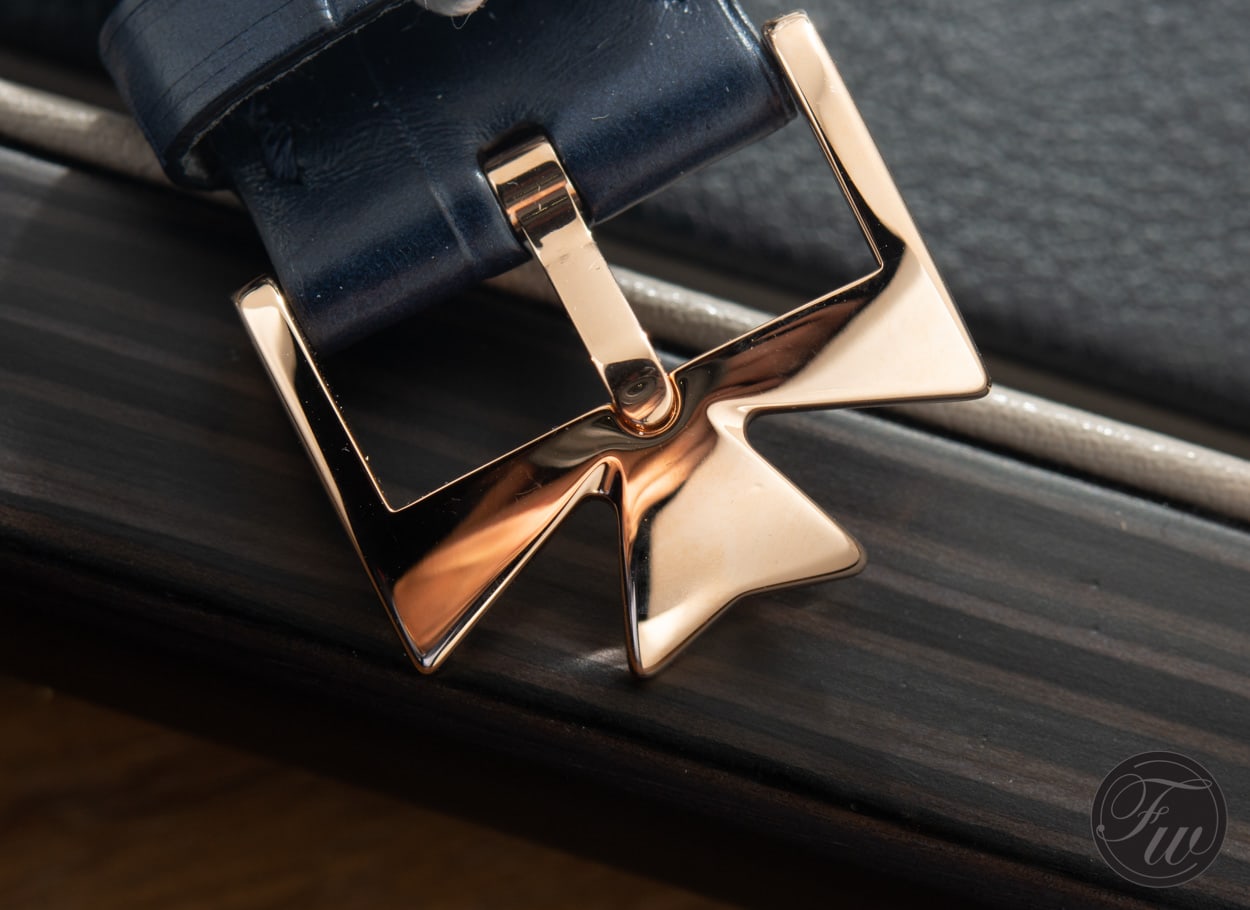 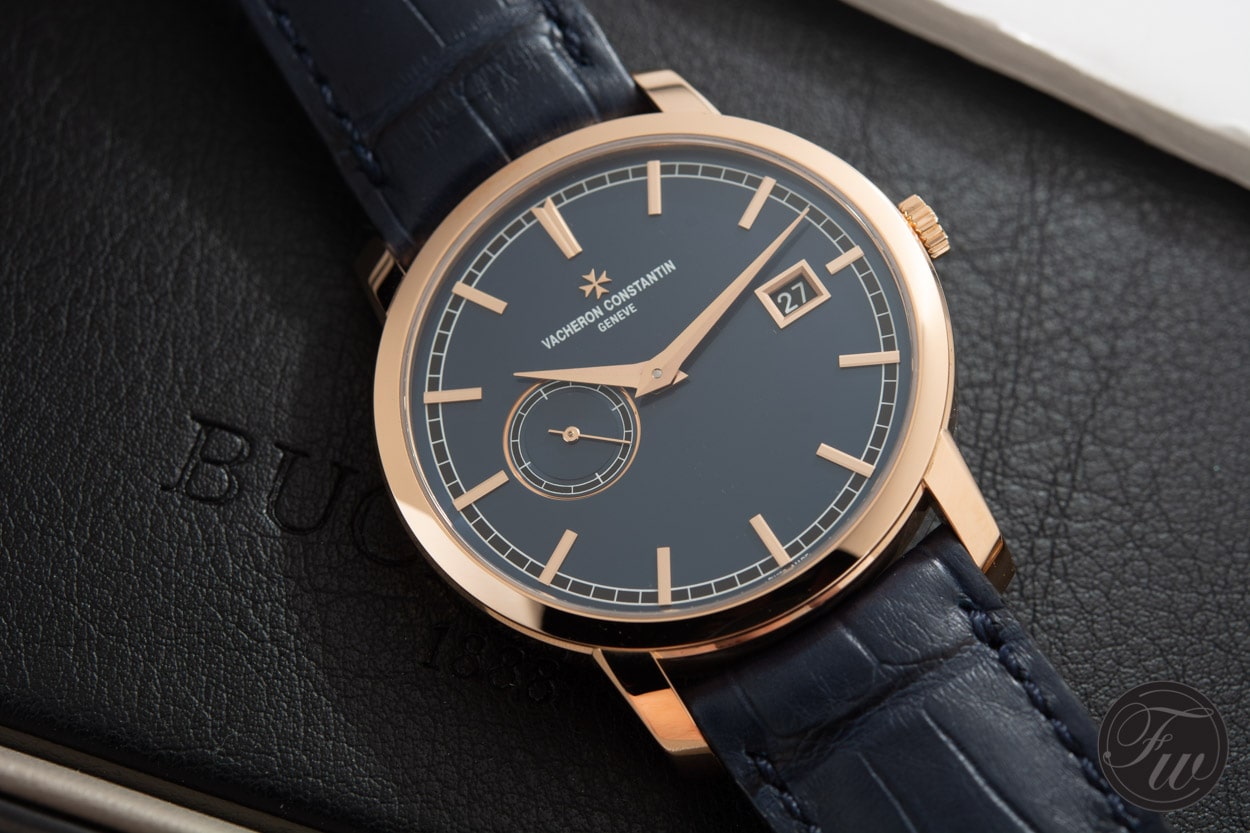 To be honest, I wouldn’t care too much. They are just beautiful blue editions pieces, from a manufacture with a huge heritage when it comes to fine watchmaking.

More information about the Traditionnelle Bucherer Blue Editions and how to order them, here.