Anyone who is part of the watch community will probably agree that watch spotting can be a really satisfying activity. I sometimes entertain myself by checking out the wrists of others on the tram or plane sitting next to me. You usually have a preconceived idea of what a “Rolex wearer” or an “Omega guy” looks like. These are perfect occasions to assure your “theory” about them. Not to mention, when you see a special piece, a limited edition or a cool vintage watch. All of a sudden, the guy who occupies the whole armrest next to you earns your respect. Watch spotting has another way too; watching movies and TV. Today’s Full HD TVs allow you not only to see the watch crystal clear but also to pause the program while you take that screenshot for the watch forum. That’s what I did while watching Ellen on Jimmy Kimmel Live. 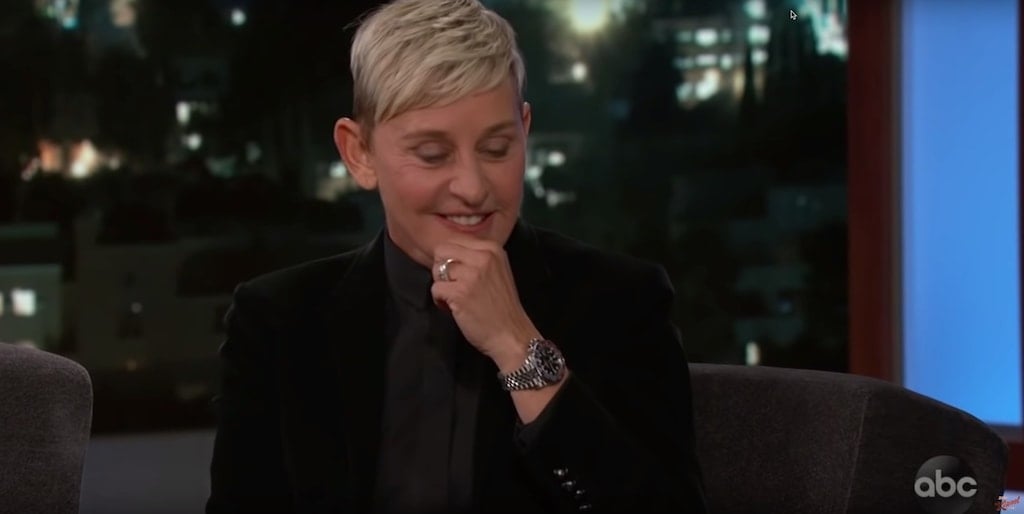 If you’ve been living under a rock for the past 25 years and have no idea who Ellen DeGeneres is let me bring you up to speed. She is one of the most influential women in television next to the likes of Oprah and Barbara Walters. Ellen is a stand-up comedian, actress, writer, producer, talk show host, LGBT activist just to name a few of her “titles”. The list goes on and on. She started her career doing stand-ups in the early ’80s. By the end of the decade she was a known comedian and slowly film rolls found her too. She starred in movies such as the 1993 comedy, Coneheads. However, the biggest breakthrough was Ellen’s TV appearances. Her series “Ellen” ran for 4 seasons and since 2003 she is the host of her own talk show; The Ellen DeGeneres Show. 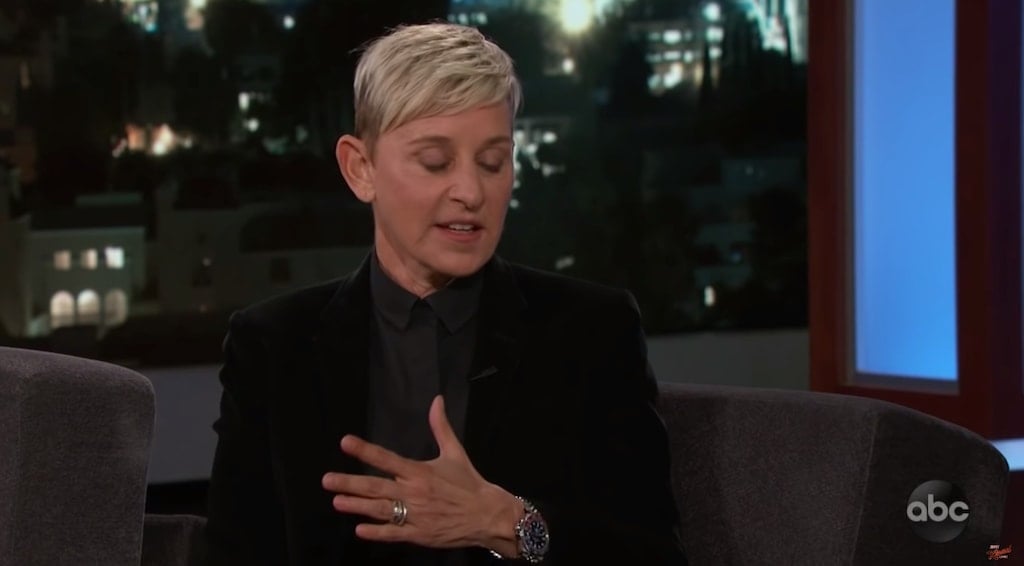 Ellen has many loves that include animals, charity organizations and Rolex watches. She has been seen wearing a number of different models from the Swiss brand throughout her career. A celebrity wearing a Rolex watch? Wow, what a story, right? Wrong. Ellen does not only wear the latest and flashiest Rolex watches today’s celebs would sport. She has a number of vintage models in her collection too. Which means she either has a great taste for the brand (we hope so) or someone hand selects those timepieces with a meticulous taste. Among others, she owns a vintage 1655 Explorer II, a number of vintage Daytonas (6263, 6241, 6265) a Yachtmaster with the Oysterflex rubber strap and a white gold Rolex Submariner. Just last week while appearing at Jimmy Kimmel Live promoting her new Netflix special Ellen was sporting the new Rolex GMT Master II (126710BLRO) Pepsi steel from 2018. 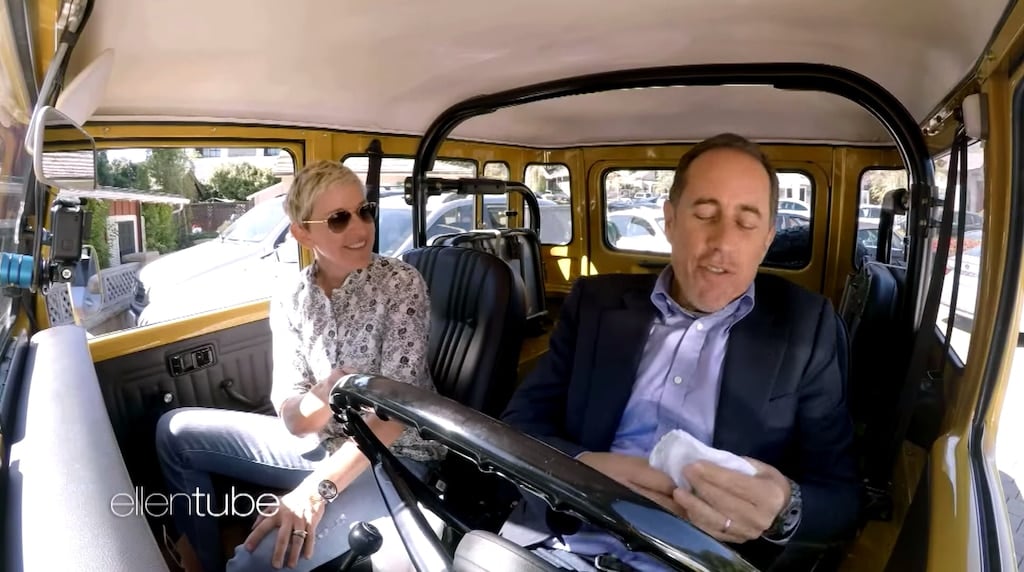 Rolex novelties are always one of, if not, the most anticipated timepieces of the Baselworld show. Their booth is easily the most photographed exhibition stand in the show. As soon as the new novelties are out you literary have to wait minutes before you could get a glimpse of them in the booth’s display windows. This year’s showstopper was obviously the steel GMT-Master II “Pepsi”, a model Rolex, so far, only released as a white gold version on an Oyster bracelet. Of course, there are many vintage references in steel but since Rolex stopped producing the reference 16710 in 2007 there has been no Pepsi GMT. Until this year. The new GMT-Master II retails for €8.400 (in Germany). That is if you can get one. Well, apparently Ellen DeGeneres did. She added yet another iconic model to her epic Rolex collection and we could not be more jealous. 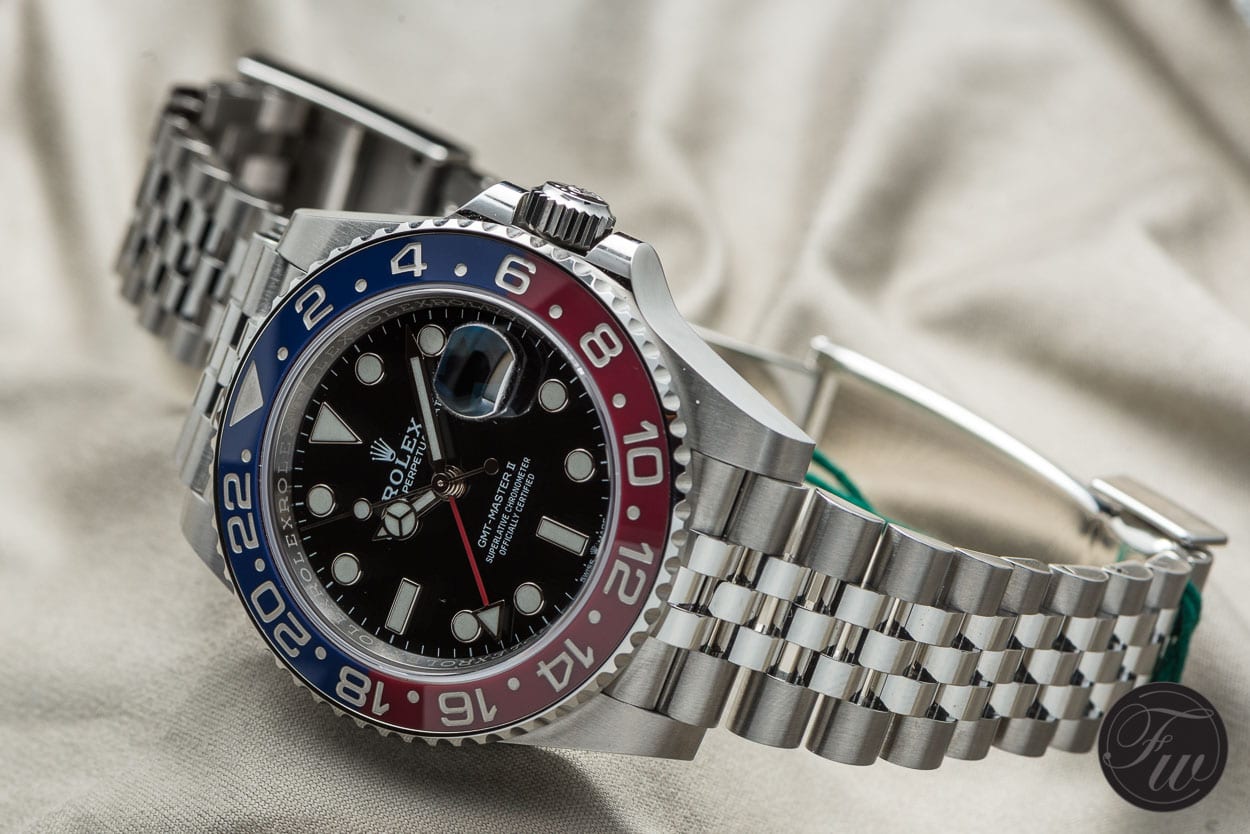