You spin me right round, baby right round...
Andreas Ahrens
comments ...
Share

Some of you may remember Dead Or Alive’s hit song from 1985. Rarely has it been a more fitting theme tune for a luxury watch, than it is for this one. You’ve heard of Tourbillons, I take it? Perhaps you’ve even seen watches with multiple Tourbillons before? How about multi-axis Tourbillons? Oh, okay. You’re clearly a pro. But tell me this: just how many watches with two three-axis-Tourbillons have you seen before? Interested? Me too…

You don’t need to feel ashamed if you haven’t come across the brand Purnell before. It’s our task at Fratello to close such gaps. The brand’s subtlety and credo already give a clear impression of what it is about: only Tourbillons. Purnell today is a high-end brand only making highly exclusive watches.

Purnell is proudly boasting that its products are 100% Swiss Made. The brand runs a showroom in Geneva’s prestigious Rue du Rhône, and the watches are manufactured in the Vallée de Joux. The brand’s specialty is a fast spinning three-axis Tourbillon called Spherion, conceived by master watchmaker Eric Coudray. Coudray also developed the movements for Jaeger-LeCoultre‘s Gyrotourbillon I and MB&F‘s LM Thunderdome. 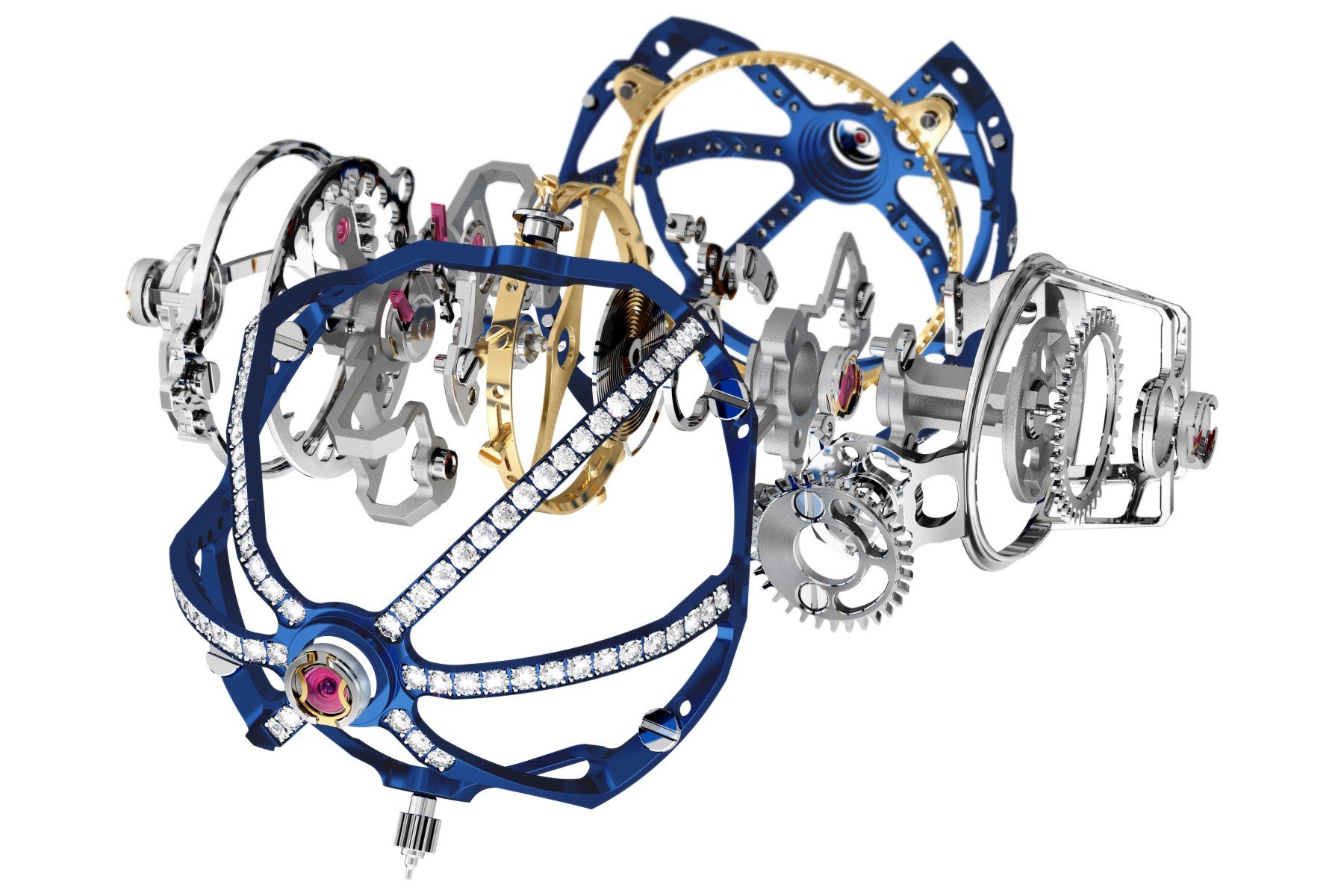 Spherion is the name Eric Coudray has given to the spherical three-axis Tourbillon, gloriously exposed in the Purnell Escape II Absolute Sapphire. What is remarkable about this Tourbillon, are not only the three axes it rotates around but also the speed at which it does so. The inner cage revolves every 8 seconds, the middle cage every 16 seconds, and the outer cage every 30 seconds. Watching this Tourbillon up close for a while might make you pretty dizzy!

Usually, Tourbillon cages are designed to have minimal weight because this heavily affects the power required to drive the movement. In the Escape II Absolute Sapphire, however, Purnell decided to cover the Spherion’s outer cage with 152 brilliant-cut diamonds, increasing the already-intense visual impact of the mechanical animation. “To hell with weight-saving! If we’re doing this, we’re doing this full gas!”

Two are better than one

Operating at the known limits of horology, two Spherions rotating in opposite directions are regulating the Escape II Absolute Sapphire. Eric Coudray managed to fully isolate the two Spherions within the hand-wound CP03 movement, enhancing the tremendous aesthetics yet further.

Driving these two heavy, high-speed Spherions with their 304 diamonds demands enormous power. Achieving 32 hours of power reserve requires six (!) parallelly aligned mainsprings assembled in four barrels. The barrels are arranged in two stacks. Each of these barrel columns carries a cover decorated with relief-engraved phrases describing Purnell’s philosophy, which may remind you of similar decorations on Greubel Forsey‘s watches. A power reserve indicator at 9 o’clock reminds the owner to wind the watch daily.

The Escape II Absolute Sapphire’s actual dial consists of a transparent sapphire ring carrying blue sapphire baguette stones and a small plate with the Purnell logo, serving as hour indexes. The hands are surprisingly simple. There is no seconds hand. Even though the original purpose of a Tourbillon is to enhance accuracy, complex Tourbillon mechanisms rarely bear extraordinary chronometric precision. 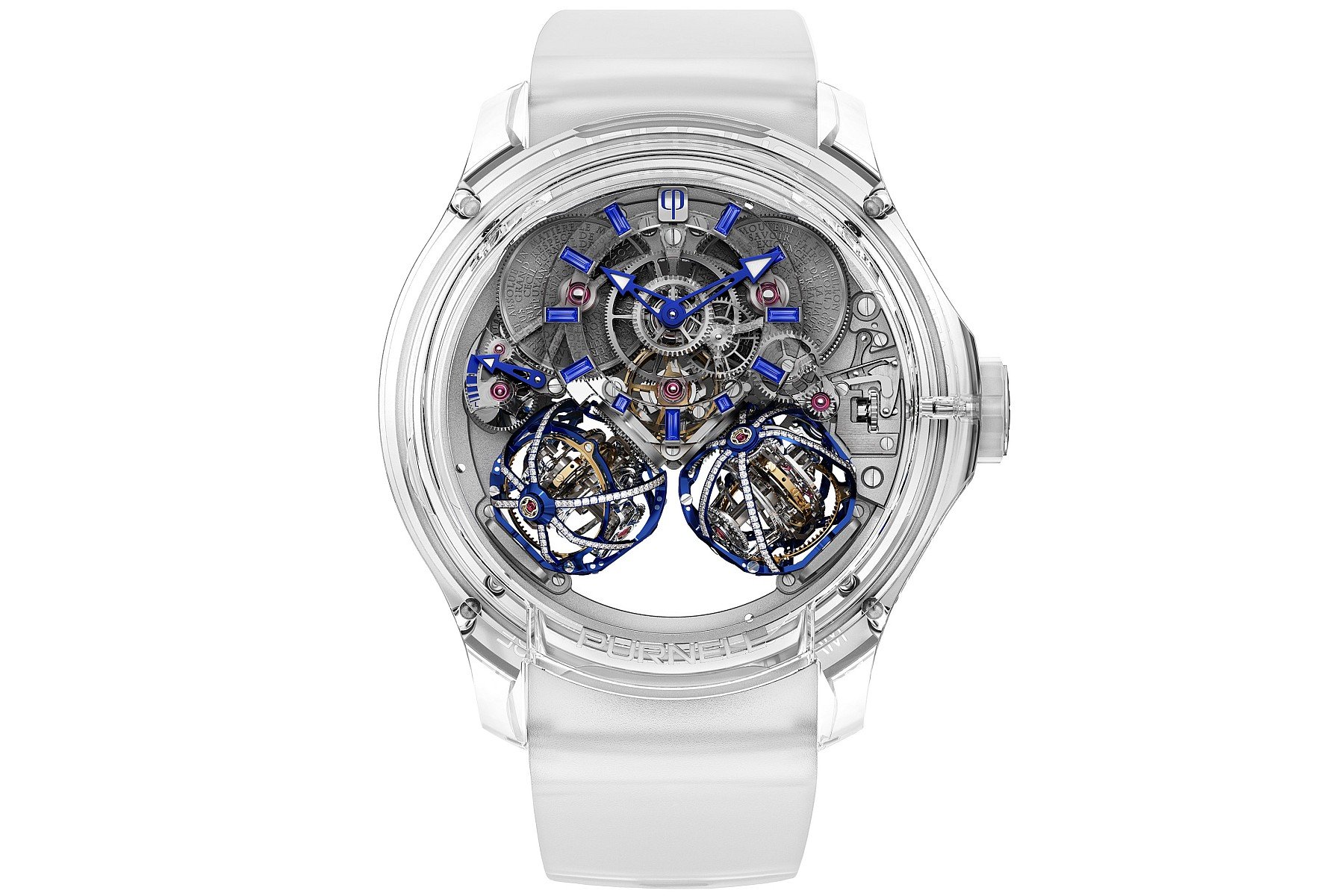 A sapphire frame for maximum visibility

Purnell has designed the entire case of the Escape II Absolute Sapphire in transparent sapphire. As if this insight into every detail of the movement wouldn’t be enough, the domed top crystal is bending down 90° around the 6 o’clock position to offer another view on the two Spherions. The fully transparent case attached to an also transparent strap hardly serves any aesthetic purpose. It barely encloses the movement. The case has a diameter of 48mm. That’s big but not gigantic. You wouldn’t want to hide this watch when you wear it, and I think its dimensions are still wearable.

This watch is a watchmaking wonderland, attached to its owner’s wrist. Those two Spherions tumbling around provide a mesmerizing sight. Although this is a technical and highly complicated watch, the sapphire case makes it appear light and airy. The many gemstones in this piece indicate that Purnell is probably directing at a female audience.

The watch depicted in this article is a unique piece. Purnell has announced more unique pieces with sapphire cases in other tints like pink, green, and blue. We haven’t got the price yet, but we will add it to the article as soon as we receive it.

Visit Purnell’s website to discover the brand’s other watch models.