5 Watches from the 1980s that are still cool today

Who told you the Eighties were a classless era?
Jorg Weppelink
comments 10
Share

Welcome to the Eighties! Also known as the “Greed Decade”. As I came into the world in 1977, I grew up in the Eighties with all its decadence and glory. But the one aspect that has always stuck with me is its horrible style. It was big, loud, and over the top. But now, in my early forties, I have fully embraced the 1980s as an era that influenced me greatly. So creating a list of the watches from the 1980s that are still cool today was like eating a burger with David Hasselhoff: it’s not always stylish, but it sure is a good time!

Where to begin with a list like this? Let’s lay out some basics about this, or else we will end up with an out of control party that features the members of Mötley Crüe and Ozzy Osbourne in a pool with some unfortunate ants. Only watches that are original designs introduced in the 1980s. So no updated watches like the Rolex GMT-Master II as it’s not an original 1980s design — although I must say I was introduced to the GMT-Master in the 1980s by none other than Tom Selleck in Magnum P.I.

When quartz ruled the world

In an era where quartz watches were at their peak, it’s no surprise that it’s quartz galore on this list! But as it turns out, the combination of analog and digital is massively appealing. With a Speedmaster X-33 in my collection and two potential analog/digital additions on this list, there is no denying my love for that quirky contrast in looks.

Another thing is, can you leave out Swatch? I thought about it for a long time. I decided that while it is hard to leave out a brand that played such a huge role in shaping the industry landscape then and now, I would not wear a Swatch these days. And that’s what I want on this list. Models from the 1980s that I would gladly strap on today. 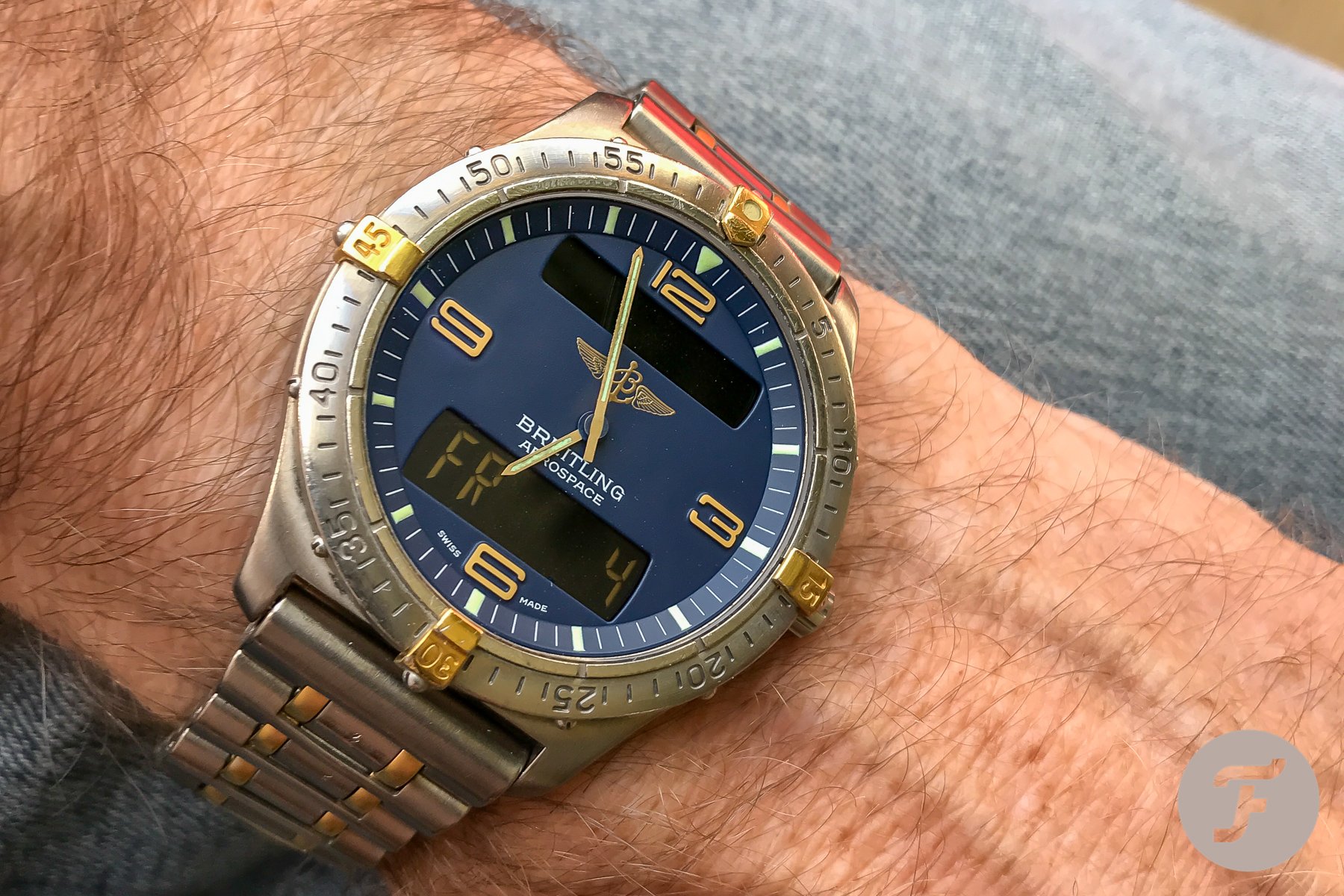 Breitling created an ever bigger icon in the 1980s with the Chronomat. But I love that other iconic ’80s Breitling introduced in 1985: the Aerospace. It takes design queues from the Chronomat, but there is one big difference: it’s modest in its appearance. And because of that, it attracts an entirely different audience. One that is more appealing than the Chronomat’s — as explained in one of our recent Sunday Morning Showdowns.

Breitling has managed to update the Aerospace perfectly over the course of 35 years.

Quite a few Fratello team members own a Breitling Aerospace, and it’s a watch that stands out immediately every time I see it. Especially our Managing Editor Rob’s Aerospace Everest Edition — it looks stunning in the metal. Granted, that watch was released in 2009, but it shows the iconic power of the design of the Aerospace through the years.

Breitling has managed to update the Aerospace perfectly over 35 years. Different versions have been released with a variety of case sizes. But what has stayed are that thin, lightweight titanium case, that typical combination of analog and digital displays, and those characteristic 1980s inspired Breitling looks. They are looks that I have grown to love. And it is no longer a matter of if but more a matter of when I will add one to my collection. And the best thing is that you don’t need particularly deep pockets to buy this ’80s icon. 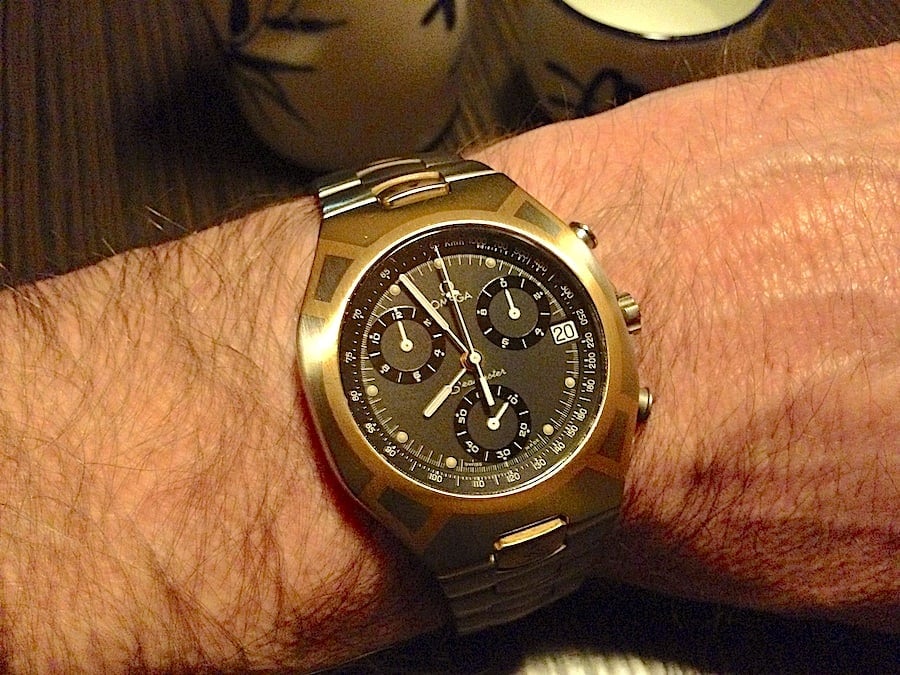 We know Gérald Genta as the designer of a string of watches that defined the watch industry as we know it today. One of his less popular designs is the Omega Seamaster Polaris. It is a watch that screams that it is from the 1980s. Genta designed the watch with quite a few familiar characteristics we know from his other designs. The contrast between round and angled shapes, an integrated bracelet, and a slim profile are familiar Genta tropes.

In their ads Omega named the watch the Omega Titanium

The first Polaris was released in 1982 in a titanium and gold version that featured an ETA 1420 quartz movement. The poster boy for the Seamaster Polaris was tennis star (and one of my childhood heroes) John McEnroe. I wrote an article on vintage Omega ads where you can see the excellent ad Omega made with McEnroe. Fun fact is that in their ads, Omega named the watch the Omega Titanium. Later, Omega also released versions in a combination of stainless steel and gold.

Although the Polaris was mainly available as a quartz watch — including a brilliant digital/analog hybrid — there are later versions that feature a mechanical movement. The main feature of the watch that still has people talking is the gold inlay. How Omega was able to produce a titanium case with a 2mm thick gold inlay is still one of the industry’s secrets. The Seamaster P.O. was part of the Omega collection until 1993 when Omega introduced the Seamaster Professional 300M. The Polaris doesn’t get a prize for being a timeless classic, but it does compete for the most recognizable ’80s watch design. 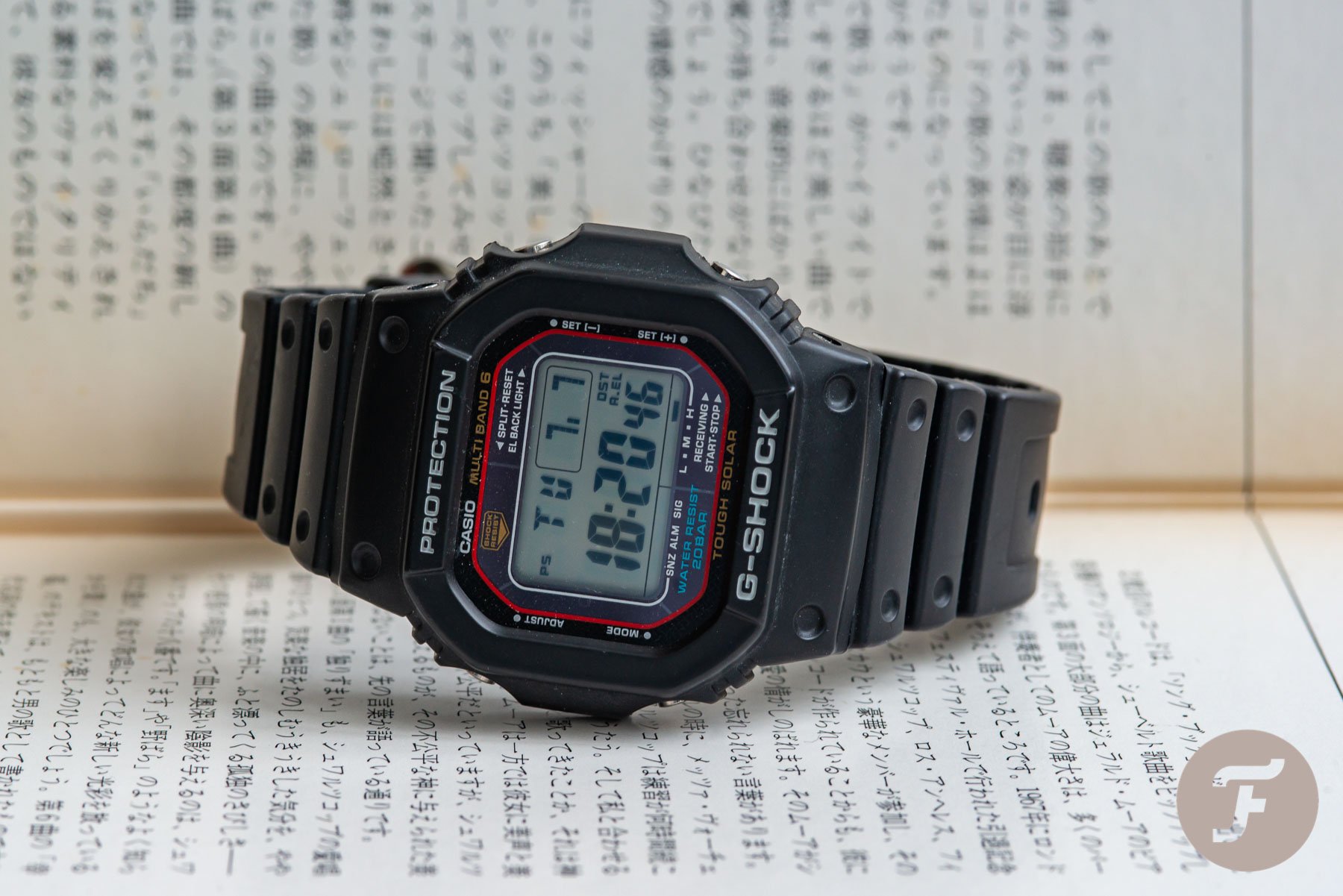 The Casio G-Shock needs no explanation. Since its introduction in 1983, G-Shock has conquered the world with watches based on the Triple 10 concept. Triple 10 stands for waterproof to 10 bar, drop-proof to 10 meters, and a battery life of 10 years. The original G-Shock DW-5000C has become an industry icon with the pictured GW-M5610-1 as the current model visually closest to the original.

Pretty much all of the Fratello team members own one or multiple G-Shocks. Discussing the newest G-Shocks is a recurring topic within the team. One that was discussed quite a bit lately was Bert’s new G-Shock Master of G GG-B100BA-1AER Mudmaster — British Army. It’s a colossal 52.9mm tool watch that is surprisingly easy to wear because it is incredibly light and very comfortable on the wrist.

I own several G-Shocks, and the one closest to the original DW-5000C from 1983 is the blacked-out DW-5600BB-1. But I would not say it is also the most 1980s in spirit. That would be my all-white DW6900WW-7 that was part of The Whiteout Collection released in 2016. The great nickname fans came up with for the watch is the “Cocaine White”. And with the 1983 classic Scarface in the back of my mind, I couldn’t think of a G-Shock that is more reminiscent of the Eighties than this one. 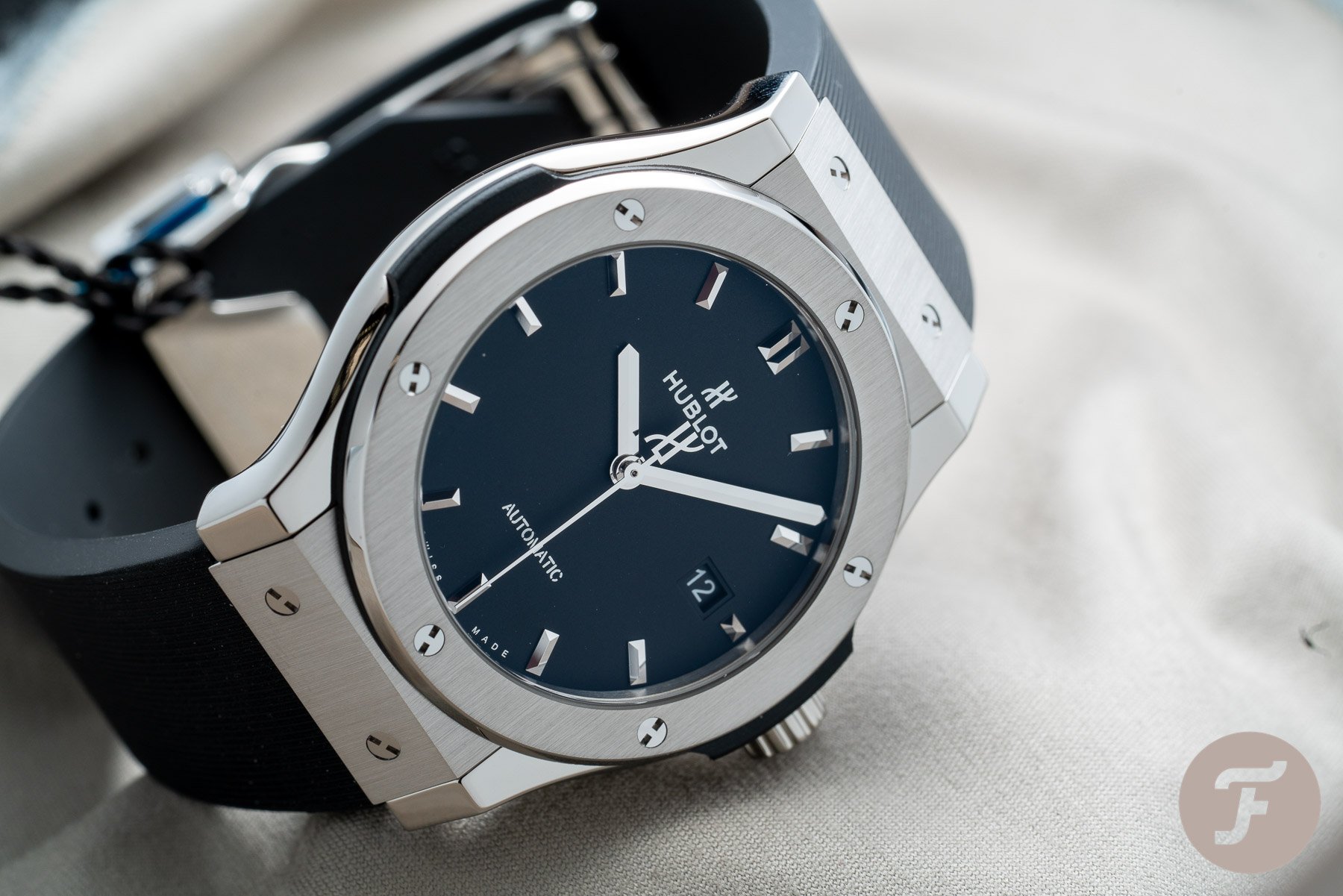 I have some mad love for Hublot. Yeah, I said it! Okay, maybe I don’t necessarily feel at home with their new money audience. And the brand’s marketing tactics have been questionable at times. And with every release being pushed as a limited edition, there is something to be said about the brand. I can hear you think: “Where is the love, Jorg?”

The watch has been labeled a copy of the classic Genta designs.

See, I have a major soft spot for the Classic Fusion. And this year it’s exactly forty years ago that Italian Carlo Crocco introduced the Hublot Classic Fusion to the world. Despite big commercial success after its initial release, the watch has been labeled a copy of the classic Genta designs, and the use of a rubber strap for a gold luxury watch was unheard of. Combining a rubber strap with precious metals was a brilliant move that has become an industry-standard over time.

But I must admit, the porthole design is far from original. But powerful does not always mean original. Forty years after its initial release, the Classic Fusion’s design has earned its iconic status. Just a few weeks ago, Hublot celebrated forty years of Classic Fusion with the release of the Hublot Classic Fusion 40 Years Anniversary. It reminded me once more how much I like the iconic looks of the original Classic Fusion. The main thing that bugs me about the Anniversary model is that the bezel uses 6 H-shaped screws. For the original design, Crocco used 12 H-shaped screws that also served as hour markers. Another smart detail that proved that Crocco was a visionary when he designed this true icon of the 1980s. 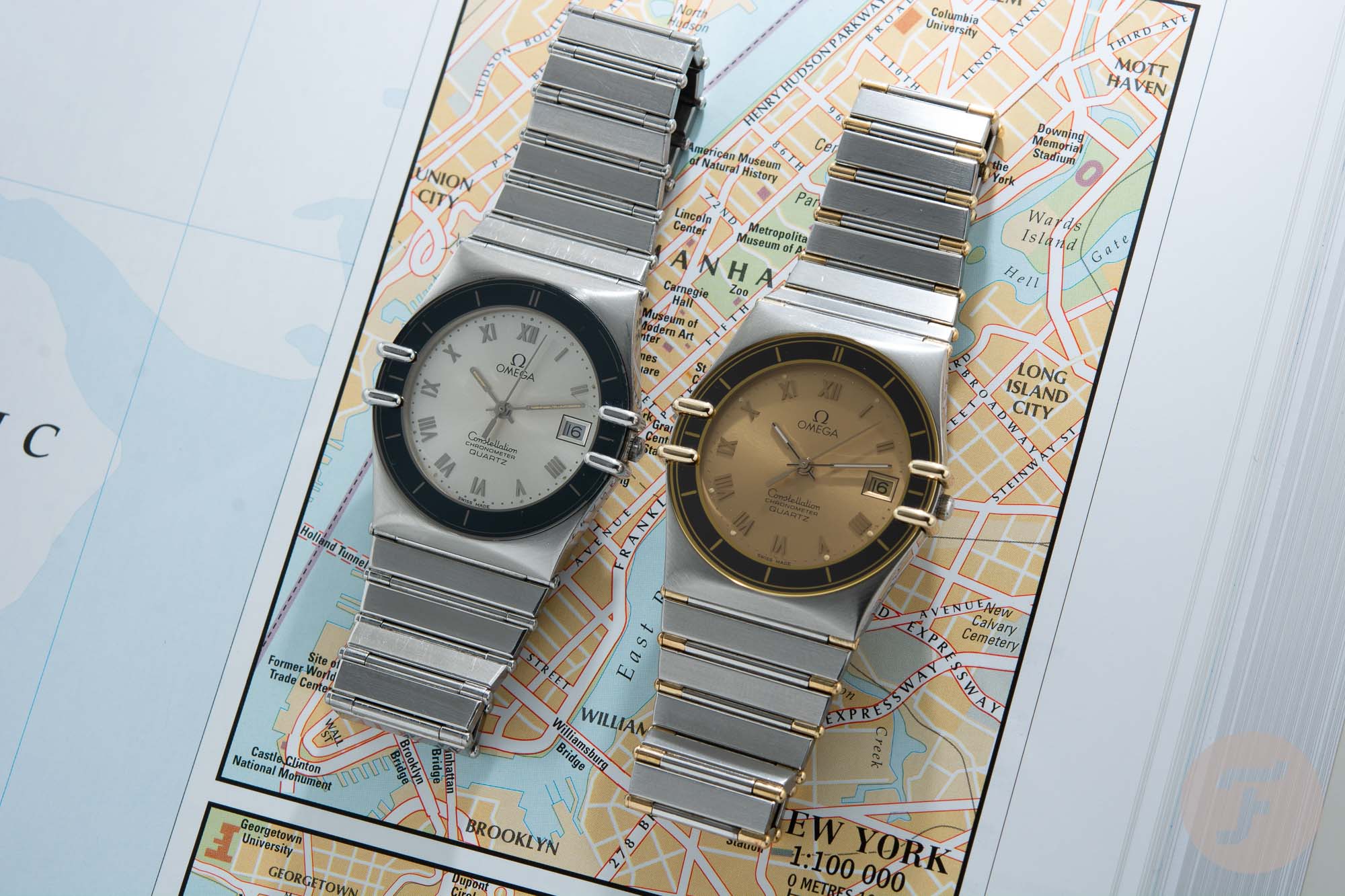 My absolute number one on this list is the Omega Constellation Manhattan. For our 52Mondayz series, I wrote a lengthy article on my first-generation Constellation Manhattan from 1984. In it, I explained my love for the design that was created by Carol Didisheim with the help of then-Omega-product-director Pierre-Andre Aellen. From the iconic claws to the printing under glass technique to the integrated bracelet, the Constellation Manhattan is an iconic 1980s design full of creative details.

This icon of the 1980s could have potentially been Omega’s iconic luxury steel sports watch.

Aellen came up with the iconic claws based on the design of an unframed bathroom mirror that was mounted to the wall by eight claws. By using the claws, they could get rid of the traditional bezel and incorporate the hour markers into the crystal by using the revolutionary printing under glass technique. It made sure that the watch could have a very slim profile and makes it super comfortable to wear. But maybe the most surprising aspect is that the first generation Constellation Manhattan wears a lot bigger than its just-under-33mm-size would have you think.

Today’s Omega Constellation collection still uses some of the iconic elements used for the first generation Constellation Manhattan. The barrel-shaped case and the claws are still present in the design. But today’s version is by far not as impactful and cool as the initial version. Which is a shame because I feel this icon of the 1980s could have potentially been Omega’s iconic luxury steel sports watch. And, quite frankly, it is not now. It is a bit of a shame, considering the first generation Constellation Manhattan is, without a doubt, my favorite watch from the 1980s.