Rolex has a strange power over people. Despite my industry experience, I am not an exception to that rule. In fact, perhaps it is exactly because of that experience that I allow myself to submit to its power. I’ve not always been this way. I’ve been through phases during which I flat-out rejected the very suggestion that I might ever own a Rolex, let alone wear one out of choice. Those days are gone. And now, as of two weeks ago, a new era has begun. I bought a Rolex. It was a pre-owned Rolex Oysterdate Precision 6694. Nothing odd about that, I hear you say. But what would you think if I told you I hadn’t spent a moment’s thought on this model until five minutes before I pulled the trigger? Insane or inspired? You decide…

My relationship with Rolex has evolved over the years. What began as distant respect, morphed into interest, quickly transformed into disinterest, shifted through a phase of active dismissal, before slowly becoming admiration and then desire. Exactly what I desired from the Crown has been just as inconsistent throughout the years. My prime focus began with the DateJust 36, moved to the GMT Master II, was, for a while, the modern Explorer II, then the Sea-Dweller, then the GMT Master II (again), before returning to the Rolesor revelation that started it all. I’ve trawled vintage sites for years, looking for that unmissable opportunity. I saw some good stuff. But I found nothing that fit the bill exactly. 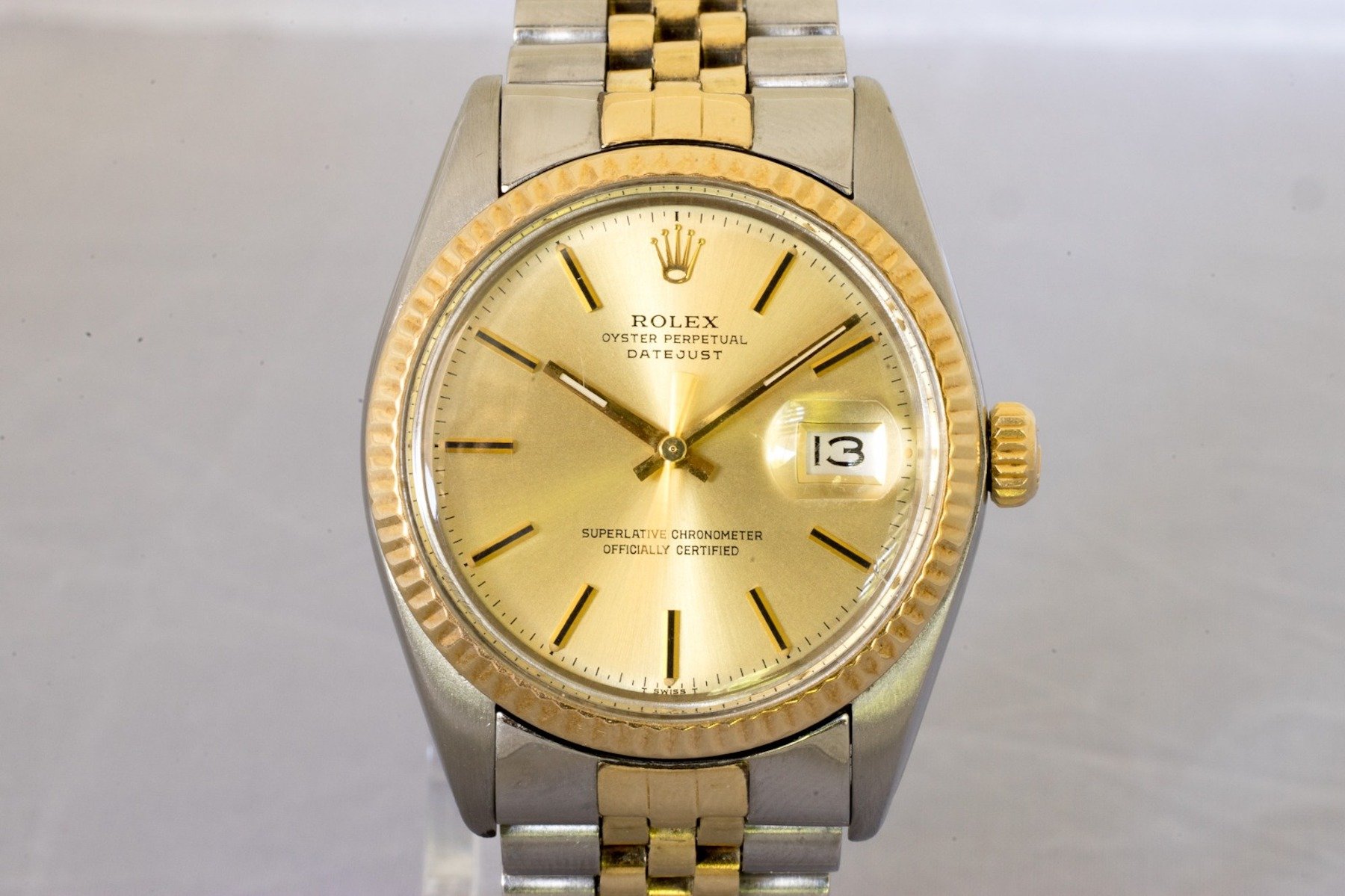 The closest I came to joining “Club Rolex” was when a Rolesor Datejust with a champagne dial from 1986 hit the web priced around $3,500. That was maybe 18 months ago. I ummed and ahhed over that piece one “um” and several “ahhs” too long. It sold. At the time I thought it was a fair and tempting price for a pre-loved piece in such excellent condition. I have seen few in that ballpark since, however. Prices have continued to climb. This probably has a lot to do with Rolex finally hiking the RRP up to where it feels it should be, along with the controlled scarcity of new models. Now, more than ever, the pre-owned market is the place to go for Rolex. And so, for me, the question became more one of timing than anything else. 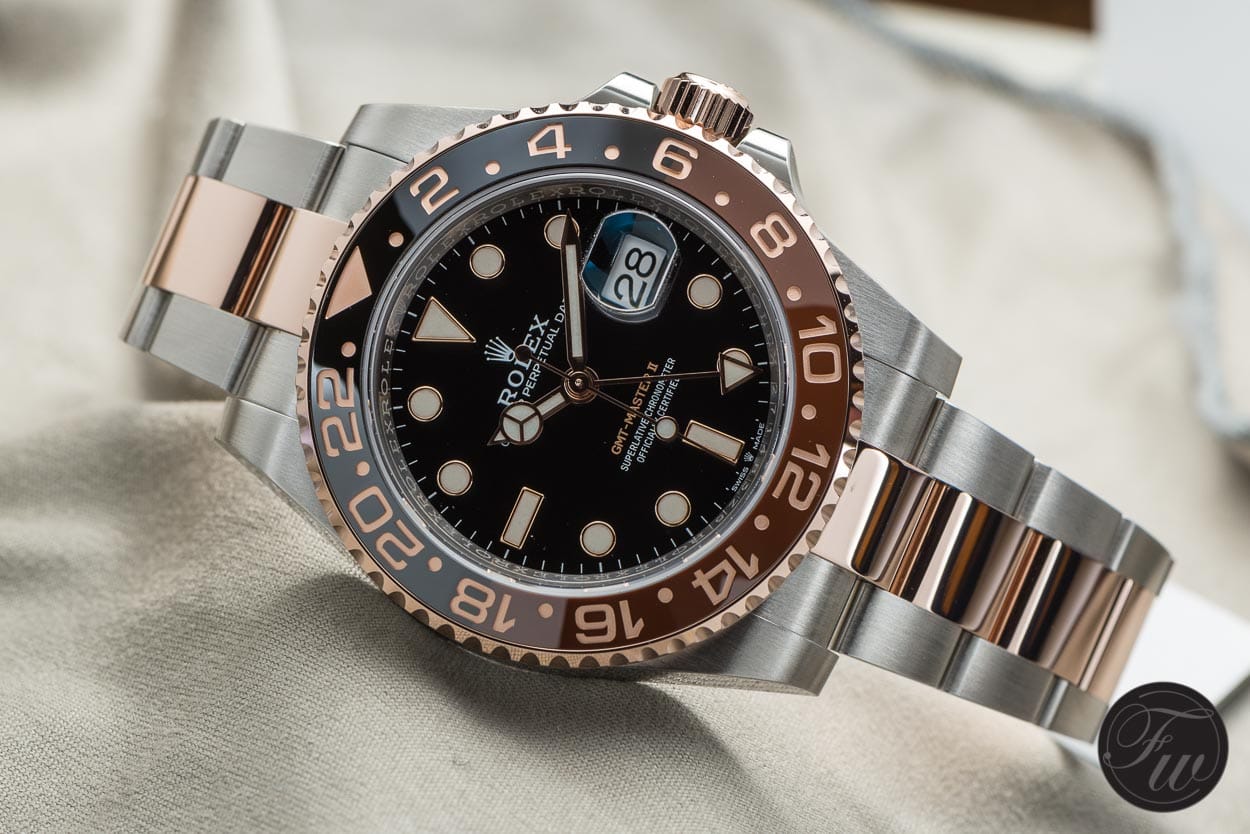 Despite a bucket-load of connections in the watchmaking world, I spent 99% of my Rolex hunt on websites rather than talking to people directly. I’ve learned that was maybe not the best strategy. During my search, I’d amassed a solid understanding of what constituted a good price, and yet, those figures were inflated by the sellers factoring in the associated costs of listing their wares on an established marketplace.

However, as someone who believes in paying for the sometimes invisible services and assurances provided by these platforms, I reasoned it made more sense (for me personally) to continue in this vein. My interest slowly developed into an obsession with a few pieces that I hope I would have the guts to spring for should they ever become available at a “good” price.

I was experiencing this stage of thinking around eight months ago. I had “narrowed” my field of interest to three models. The Datejust 36 in steel and yellow gold (with either a champagne or linen dial) was still present. The GMT Master II (either a vintage Coke or a modern Root Beer) had hung around for the long haul. And the modern Explorer II (black dial) seemed an attractive option given its lower pre-owned premium than many other extant models (if only it were 40mm…). And then the Oysterdate Precision 6694 came into my life… 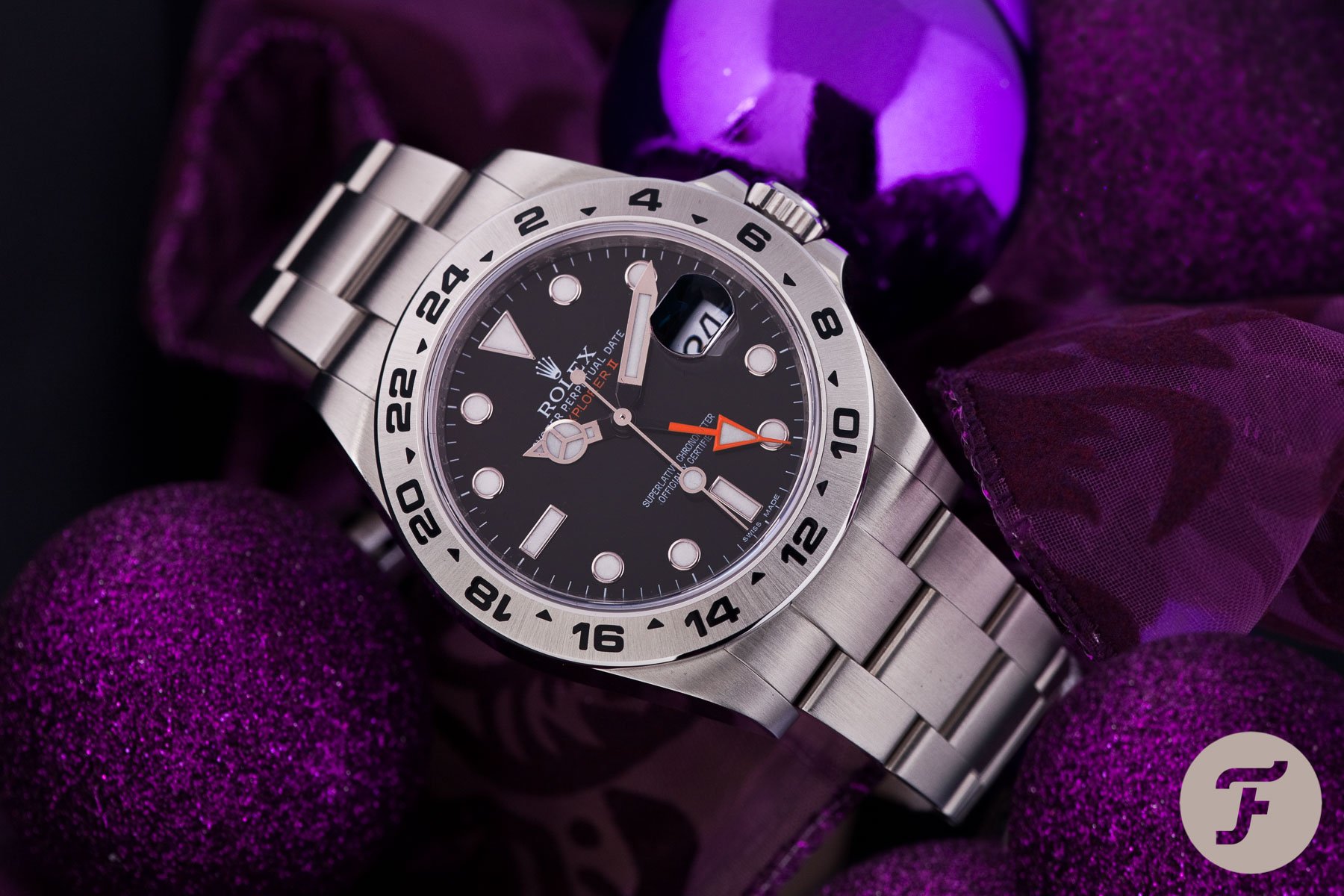 Through this journey, I had amassed a checklist of what was most important to me beyond the idea of a “good” price. The condition was key, but timelessness was also a necessity. I do not buy watches to sell. While my obsession with finding a good Rolex at a good price seems to point to my having at least some interest in resale, it does not. I simply didn’t want to pay over the odds for the hype. Yes, the GMT Master II is a flashy model with a high recognition factor, but it was not the reason I sought it. The other two models on my list were, by comparison, pretty under-the-radar Rolexes. And that really appealed to me.

I wanted to buy a Rolex, not so I could tell everyone else I bought a Rolex (this article wasn’t planned, but, spoiler alert: I bought a Rolex), but because I wanted to experience it firsthand. It was very important for me to learn about the process and my own reactions to it. What was I doing right? What was I doing wrong? How could my endeavor be useful to other people? 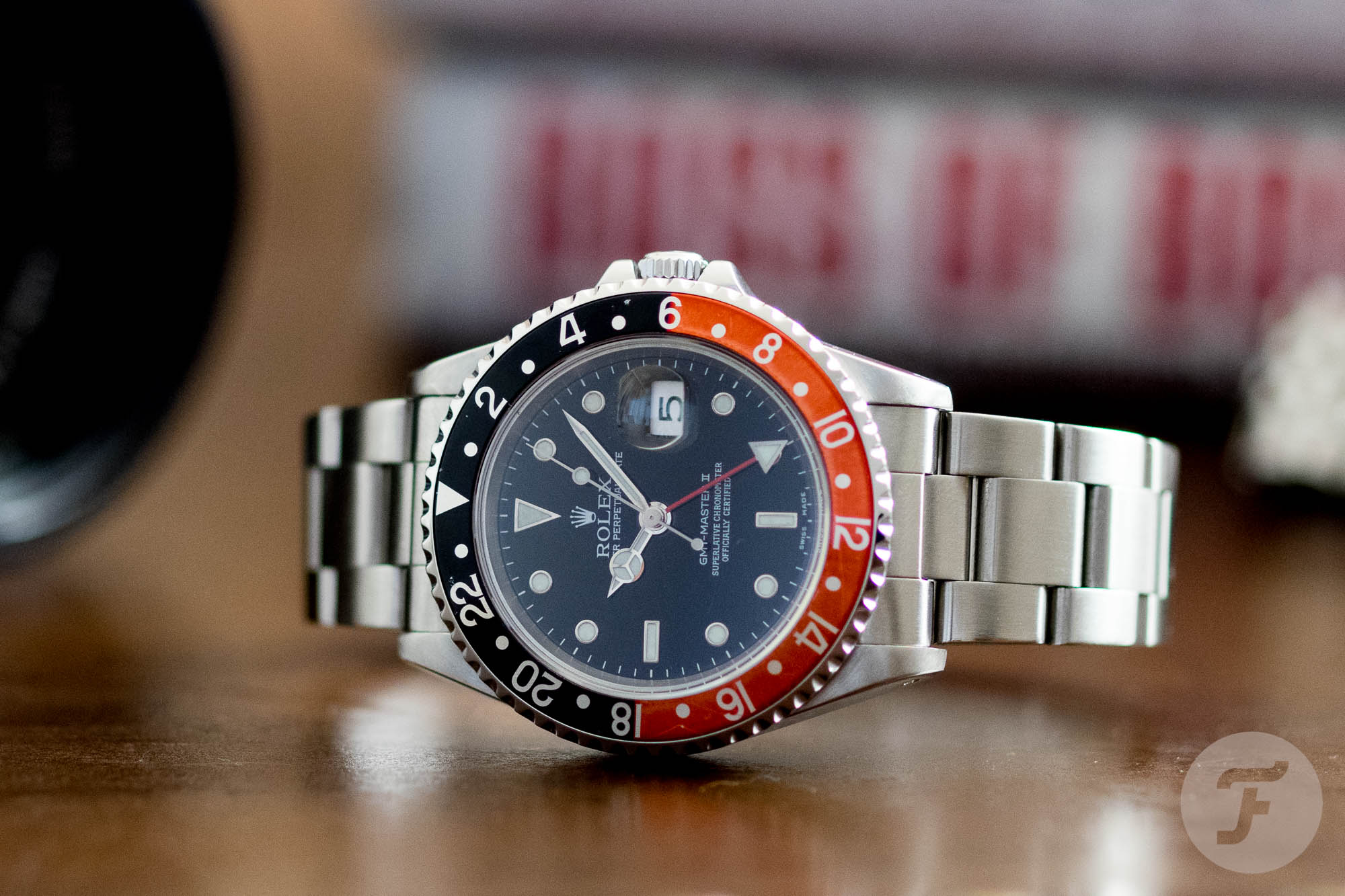 I alluded to one “mistake” I made earlier. I didn’t talk to enough people. As soon as I did, I unearthed a whole world of off-grid trading of which I’d been mostly unaware. Models would trade hands for often crazily low prices. It seems that, in some corners of this world, such a thing as a bargain Rolex still exists.

Why aren’t these models trading for the prices we might expect a pre-loved Rolex to command? Well, often, they were being sold by or moved between collectors trading at eye-level. A favor here, a favor there, a mutually-beneficial deal of which the Rolex sale may have been a part. But also, because a lot of these watches were not “collector friendly”. They lacked boxes, papers, a recent service, or even the condition one might hope to find at “regular” pre-loved prices. Some of them were projects, but oftentimes, they were simply models everyone seems to have forgotten about. The Oysterdate Precision 6694 is one of those. 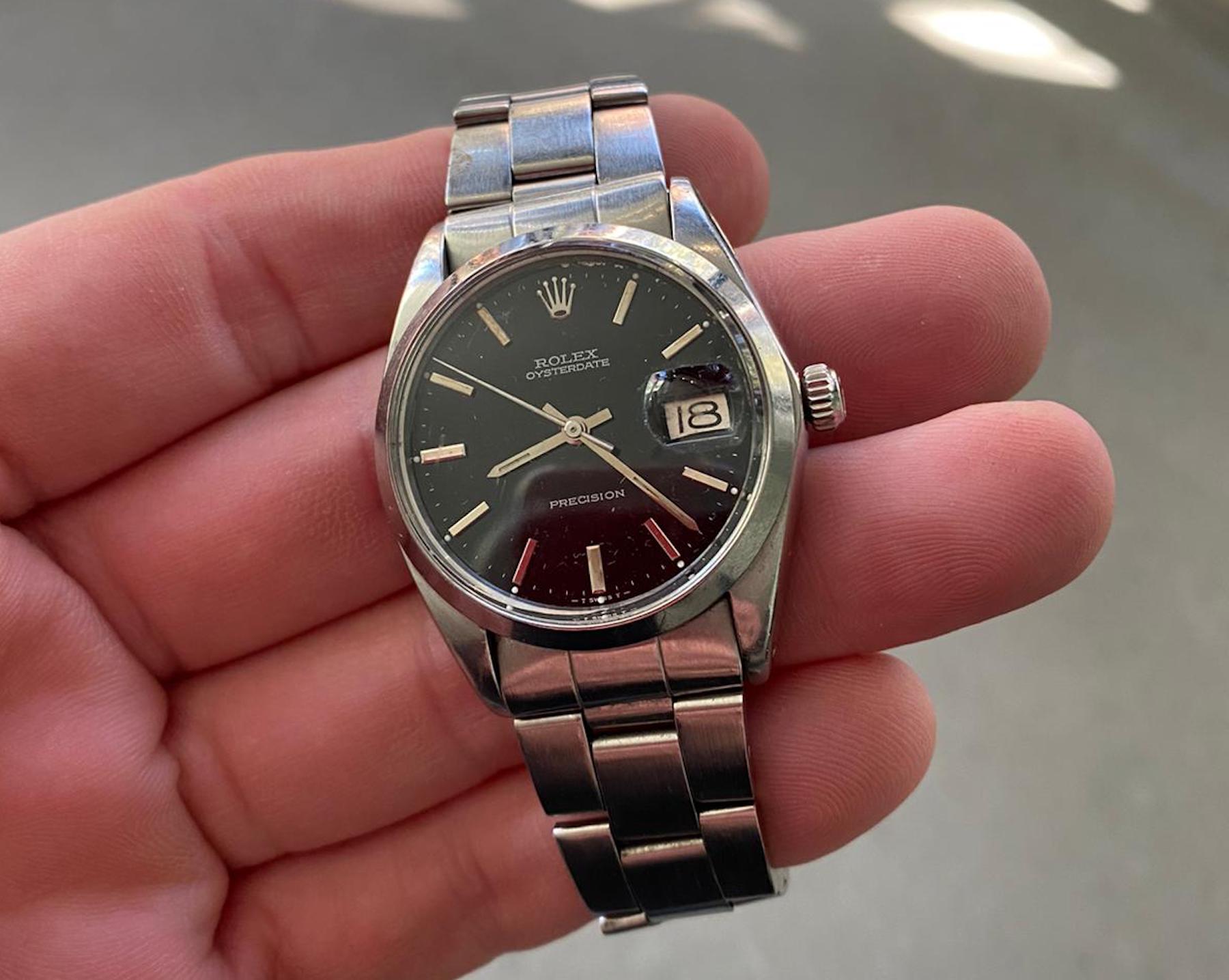 And then, just a couple of weeks ago, a friend of a friend offered an Oysterdate Precision for sale, directly to my friend. He has an insatiable taste for “bling bling” Rolex watches and had no interest in the humble, 34mm, manually-wound Oysterdate Precision 6694. He offered it to me immediately. I couldn’t quite believe what I was seeing. Was this a Datejust? No, but it was a Rolex with a date. Did it have its box and papers? No, it was flying solo. Was it in the best condition I’d ever seen? Heck no, but the dial and hands appeared original and correct, and the small spots of damage or patina I could identify from the photos didn’t phase me at all. 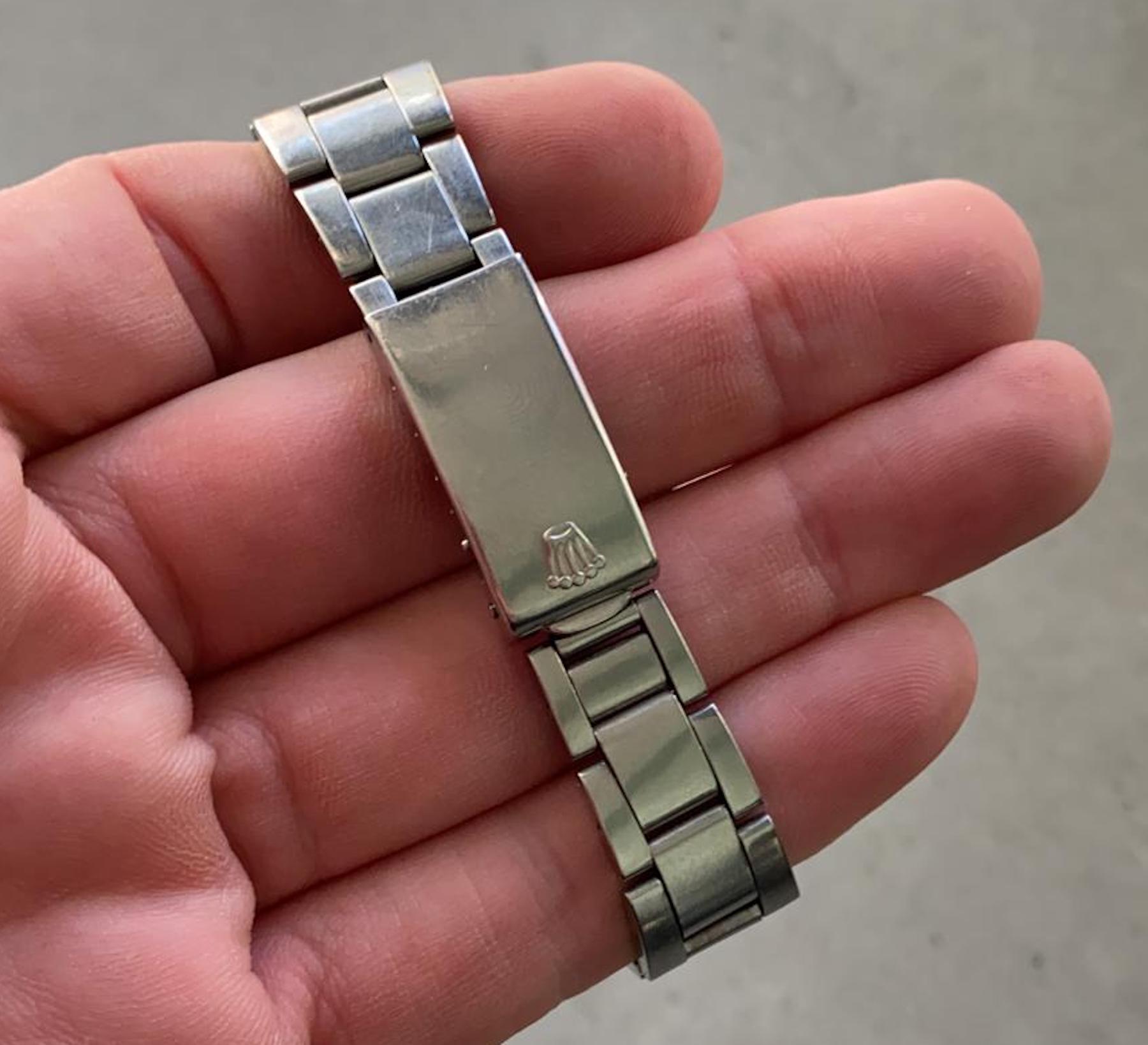 The case and bracelet looked like they’d taken a tumble down three flights of stairs while trading blows with a brick-monster, but despite what was clearly an amateurish attempt at refinishing, the edges looked just about intact enough to promise a resurrection in the hands of a seasoned pro.

Part of the reason I think the Oysterdate Precision, which was a pretty long-lived and popular model during its day, is so rarely seen or talked about is its manual movement. Rolex is of course best known for its automatic watches. But how much does that automatic winding work really mean to you? To me, it seems, it didn’t mean much at all. 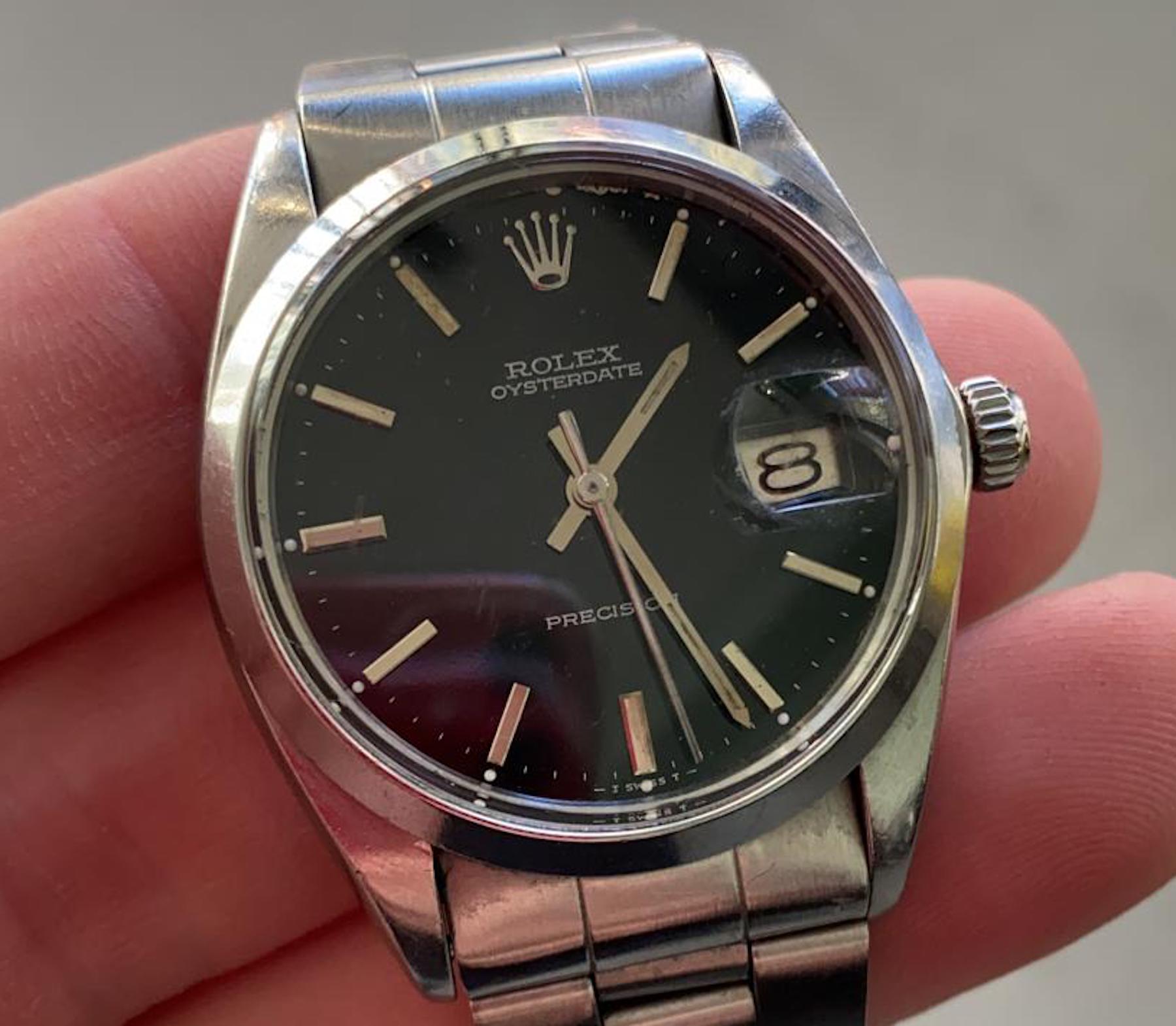 I have a lot of watches. I rarely wear the same piece more than two or three days in a row. Consequently, I have to wind pretty much every watch I haul out of the box. Manual winding watches are also something I really love. I love the slimness. I love the daily interaction with them. And, perhaps most of all, I love how it feels to have a little slice of history on my wrist. They are so anachronistic, they make an automatic look like the Apollo Lunar Module.

And so, trading automatic winding and that part of Rolex’s history for a manual movement (still made by Rolex) in an under-the-radar gem, with an acceptably patinated dial, and a case that looked like it could be saved from death’s door was the perfect combination I hadn’t predicted. And at €1,200, I couldn’t say no. That price left enough to pour €300–400 into a service and refinish from a trusted watchmaker without pushing me anywhere near the €2–3,000 these 6694 models are regularly listed for online.

And so I got lucky. I ended up with a Rolex I never saw coming. Maybe this piece will be a cost-effective way to scratch the Rolex itch. Maybe, just maybe, it will end up costing me a lot more if this curiosity develops into addiction. Regardless, I couldn’t be happier I waited as long as I did, and I can’t wait to share more images with you when the watch has been given some much needed TLC. Ever since this piece landed in my lap, I’ve been keeping an eye on other Oysterdate Precision watches. It makes for interesting reading… Learn more about Rolex here.