Why The Rolex Milgauss Might Be My Next Big Watch Purchase

The watch for scientists and engineers is calling my name...
Robert-Jan Broer
comments 57
Share

The current Rolex Milgauss was introduced in 2007, and I remember it wasn’t an easy watch to get at first. However, one year later, I published an article on Fratello in which I wrote that the demand had been going down ever since and that the versions without the green sapphire crystal went for below €4,000 on the secondary market. But that was then, and this is now, and the Rolex Milgauss 116400 is already 15 years old. 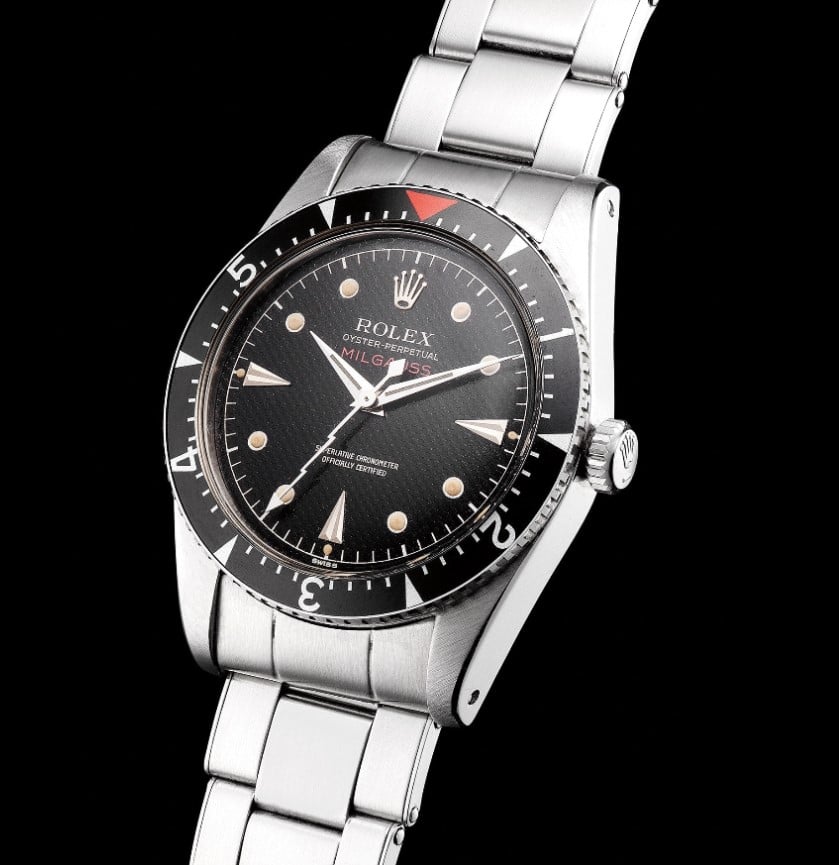 A brief introduction to the Rolex Milgauss

The very first Rolex Milgauss was introduced in 1956 with references 6543 and 6541. This watch was developed for scientists, and according to our friends over at Amsterdam Vintage Watches, it was made for CERN in Switzerland. CERN is the European Organization for Nuclear Research, established in 1954. As its name suggests, the Rolex Milgauss is resistant to 1000 gauss (0.1 Tesla). At least at the time, it could resist a significant amount of magnetism. 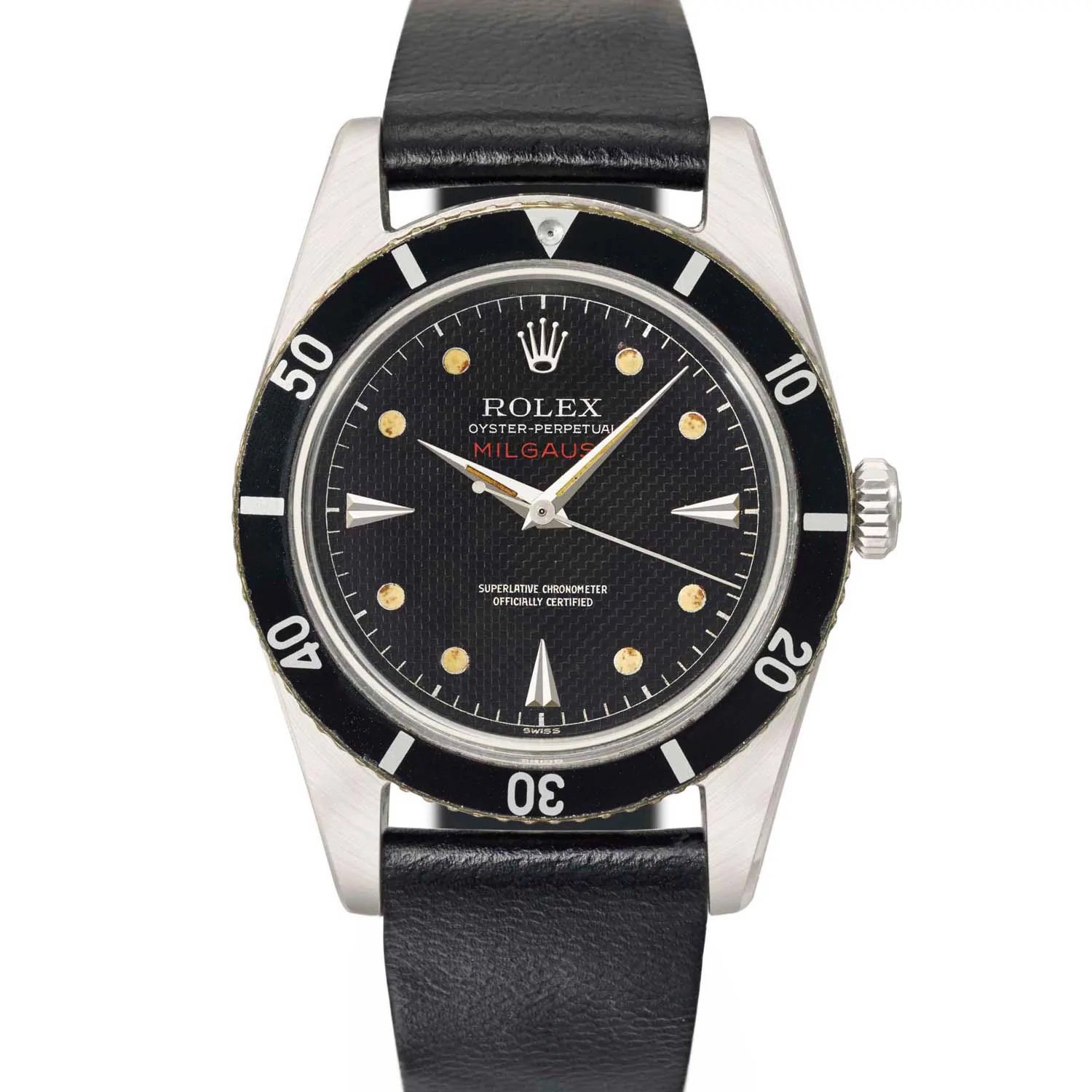 Magnetism is everywhere in today’s world

Allow me to side-step a little to talk about gauss, Tesla, and magnetism. You’re probably familiar with an MRI scanner used in hospitals. I’ve been in an MRI machine twice. The first time was for a head scan, as I was experiencing severe headaches, which turned out to be cluster headache attacks. The second time was for a scan of my back due to a hernia. Both times, the staff made it very clear to take off my watch due to the strong magnetic fields inside. They often vary between 0.5 Tesla to 3.0 Tesla or 5,000 to 30,000 gauss. There are stronger magnets out there as well, of course, which are mainly used in research. However, back in the day, a watch that was resistant to 1000 gauss would have been sufficient for scientists exposed to magnetic fields. 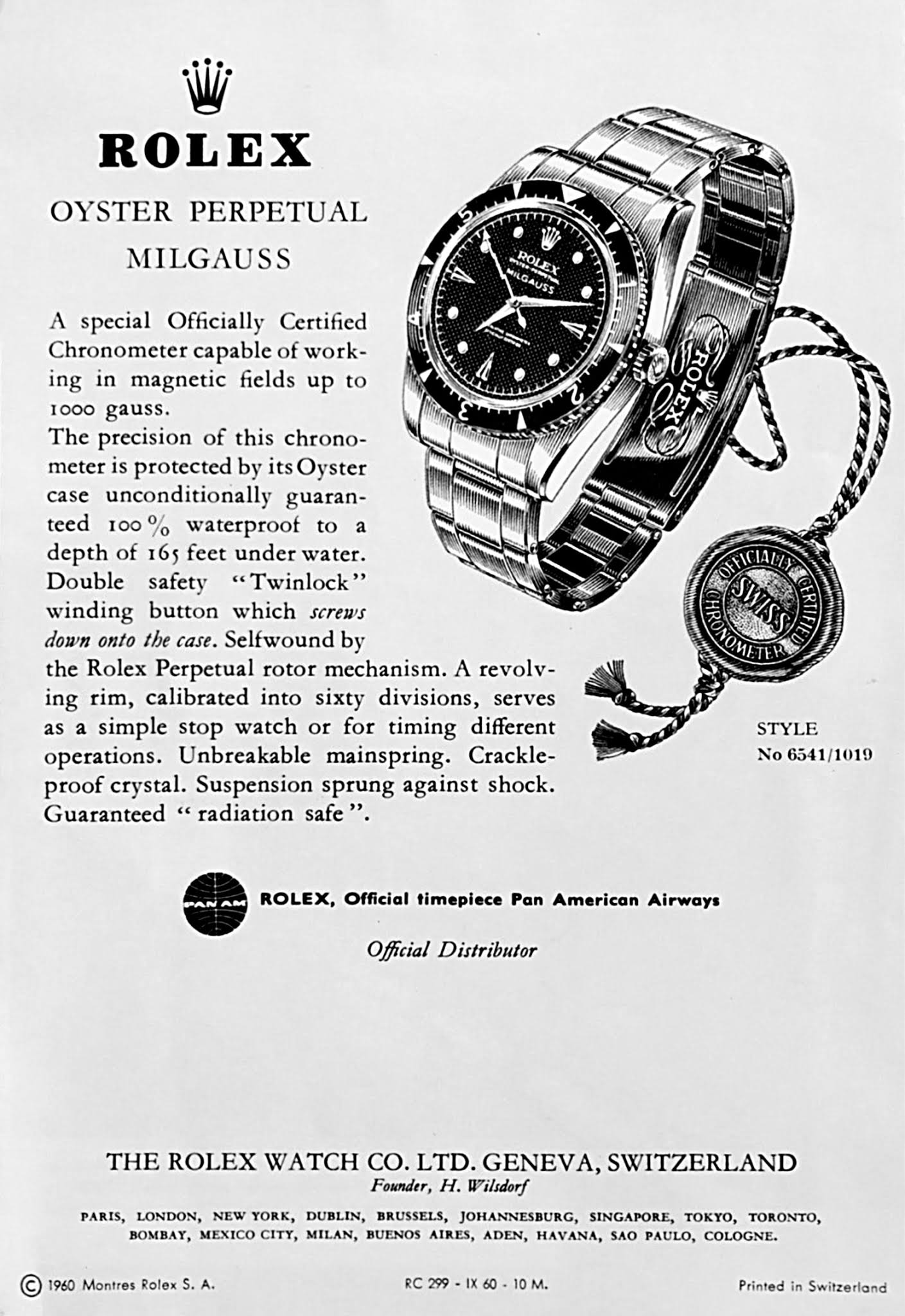 Today, magnetic fields are everywhere, from the iPad sleeve you have to your induction cooking plate. But your laptop and other electronic devices also have magnetic fields, something nearly non-existent in people’s homes in the 1950s. So at the time, 1000 gauss was a significant number. Today? Well, not so much. 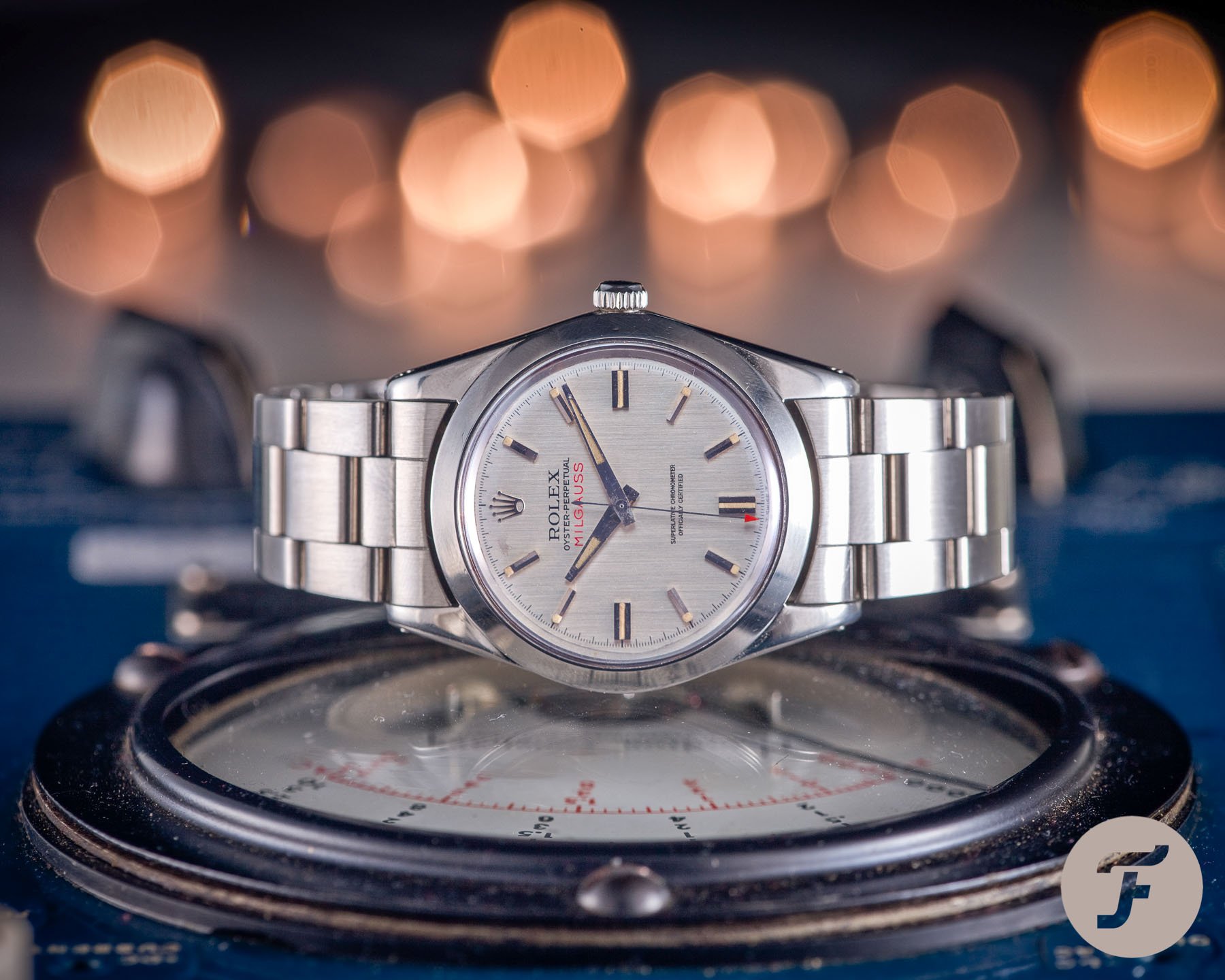 The most famous vintage Rolex Milgauss is probably the reference 1019 introduced in 1960. The production of this 38mm watch took place until 1988 and saw several dial variations. It was probably an unpopular watch at the time because it wasn’t widely known. But as always, as soon as an “awkward” Rolex model goes out of production, it becomes collectible. The same applied (and still does) to the vintage Rolex Milgauss watches. 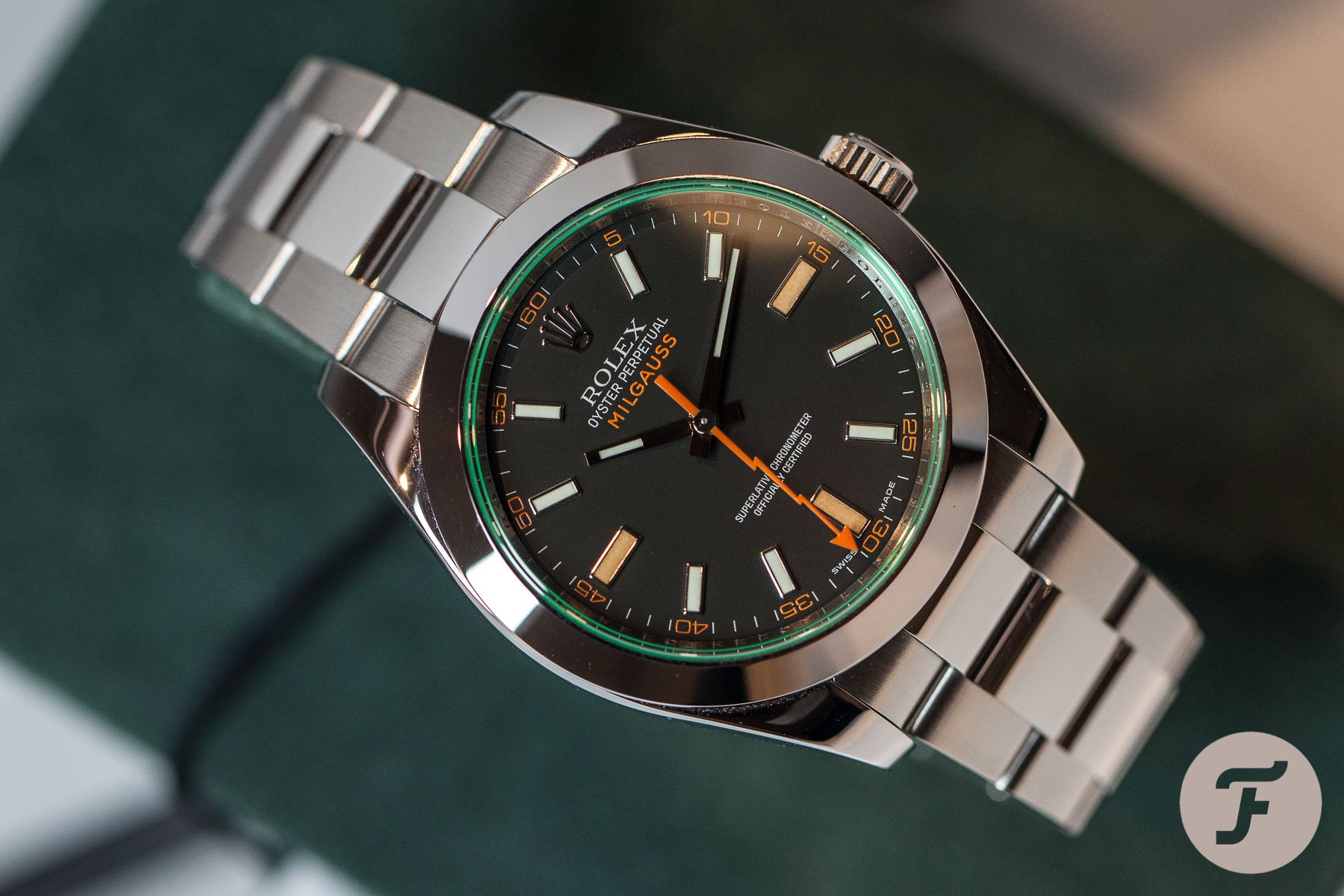 In 2007, Rolex introduced the Milgauss 116400, available with either a black or white dial. There was also the Glace Verte (“Green crystal”) version, reference 116400GV. These days, the Rolex collection shows only two versions — a blue-dialed model and the classic model with the black dial, both with green sapphire crystals. Today’s Milgauss 116400GV still comes with the movement it used in 2007, the Rolex caliber 3131. 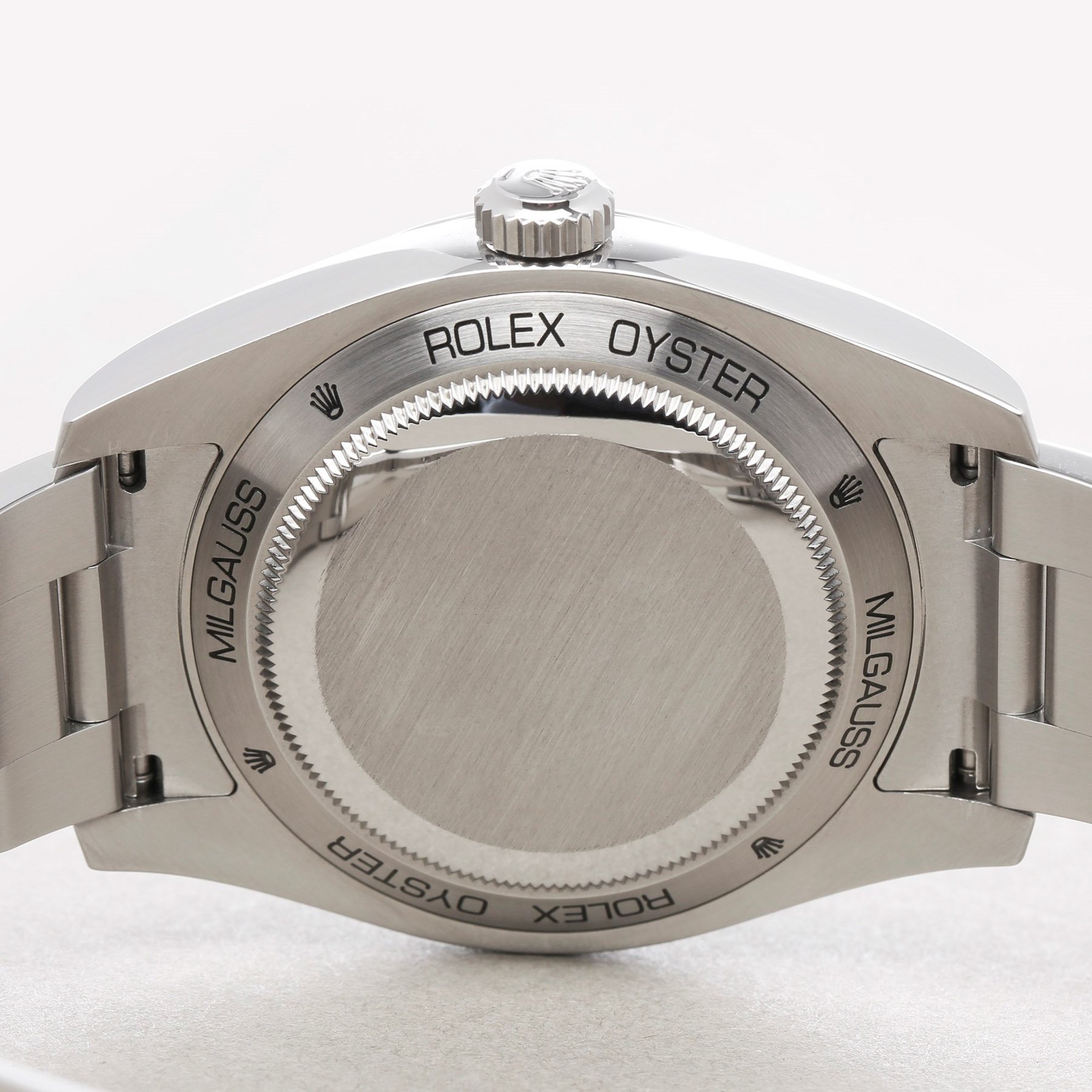 Even the Milgauss case back is very different from most other Rolex models.

Caliber 3131 — only for the Milgauss and Air-King

What’s quite interesting is that this movement was only used for the Milgauss and the 2016 Air-King 116900. This Rolex caliber 3131 is interesting because it has a Faraday cage for anti-magnetism, while the then-common calibers 3130 and 3132 did not. The current Air-King 126900, which debuted this year, not only get a movement upgrade (caliber 3230) but also received a new case and dial. 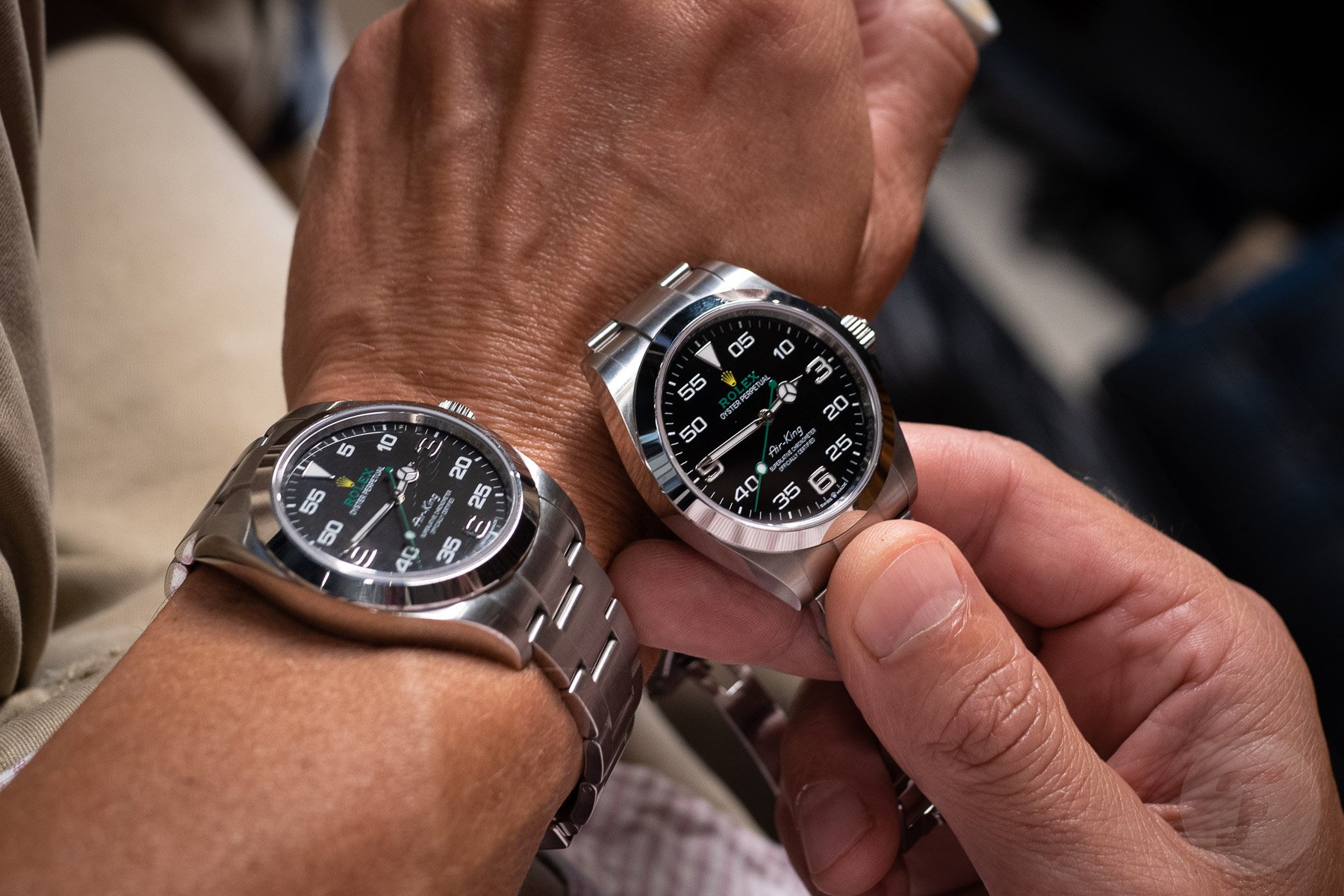 There’s a possibility that Rolex will upgrade the Milgauss 116400GV with not only a new movement but perhaps also a new case. The Air-King also received crown guards in 2022 despite the fact that it never had them in the past. Likewise, what is to stop Rolex from applying them to a new Milgauss? 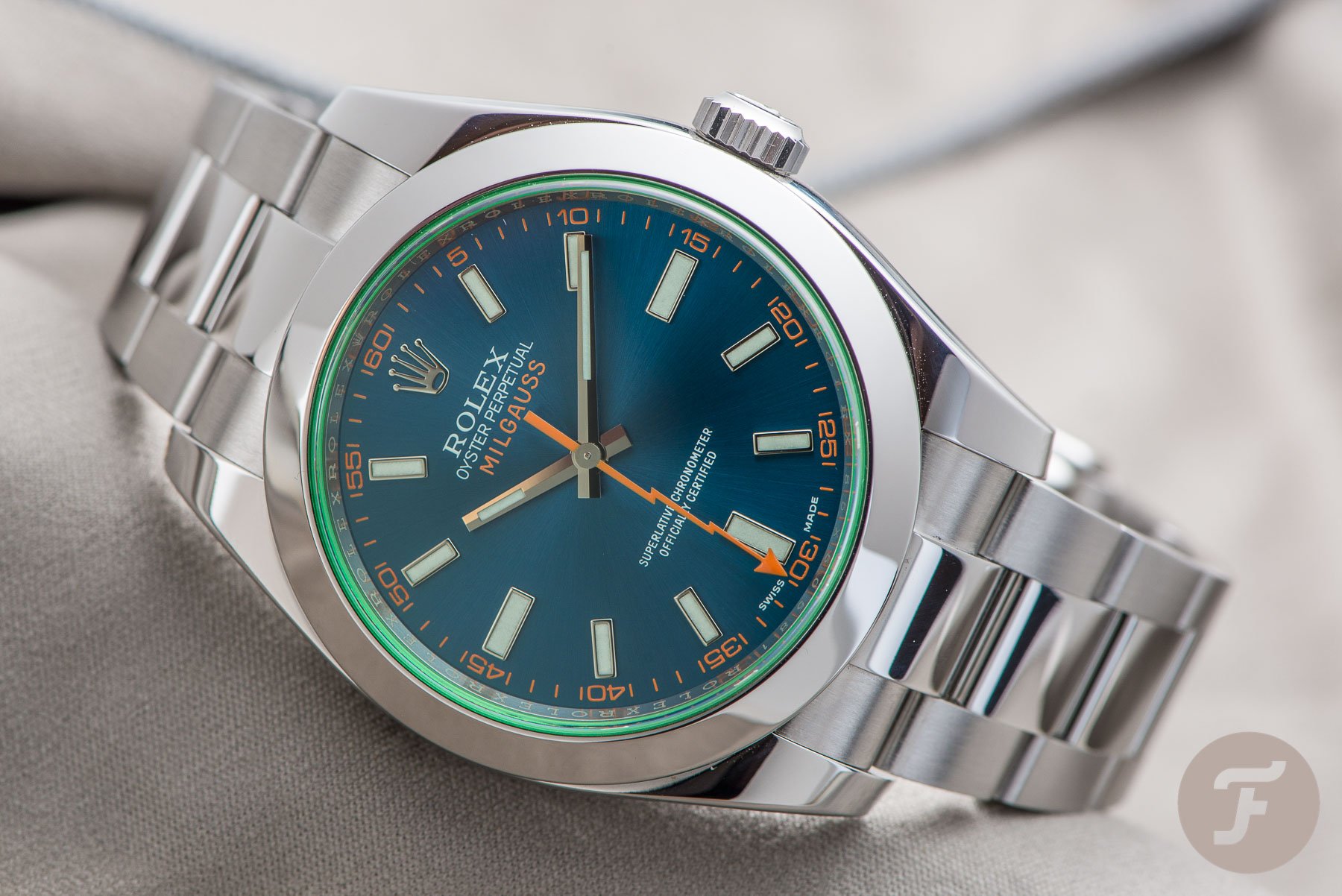 The retail price of the Rolex Milgauss 116400GV is €8,700 / $9,150. On the pre-owned market, they start lower than today’s retail price but are often offered outside the EU. This can add a significant amount in taxes upon importing the watch. Within the EU, you can find a complete-set 116400 for around €10,000. A GV version comes at a slightly higher price. 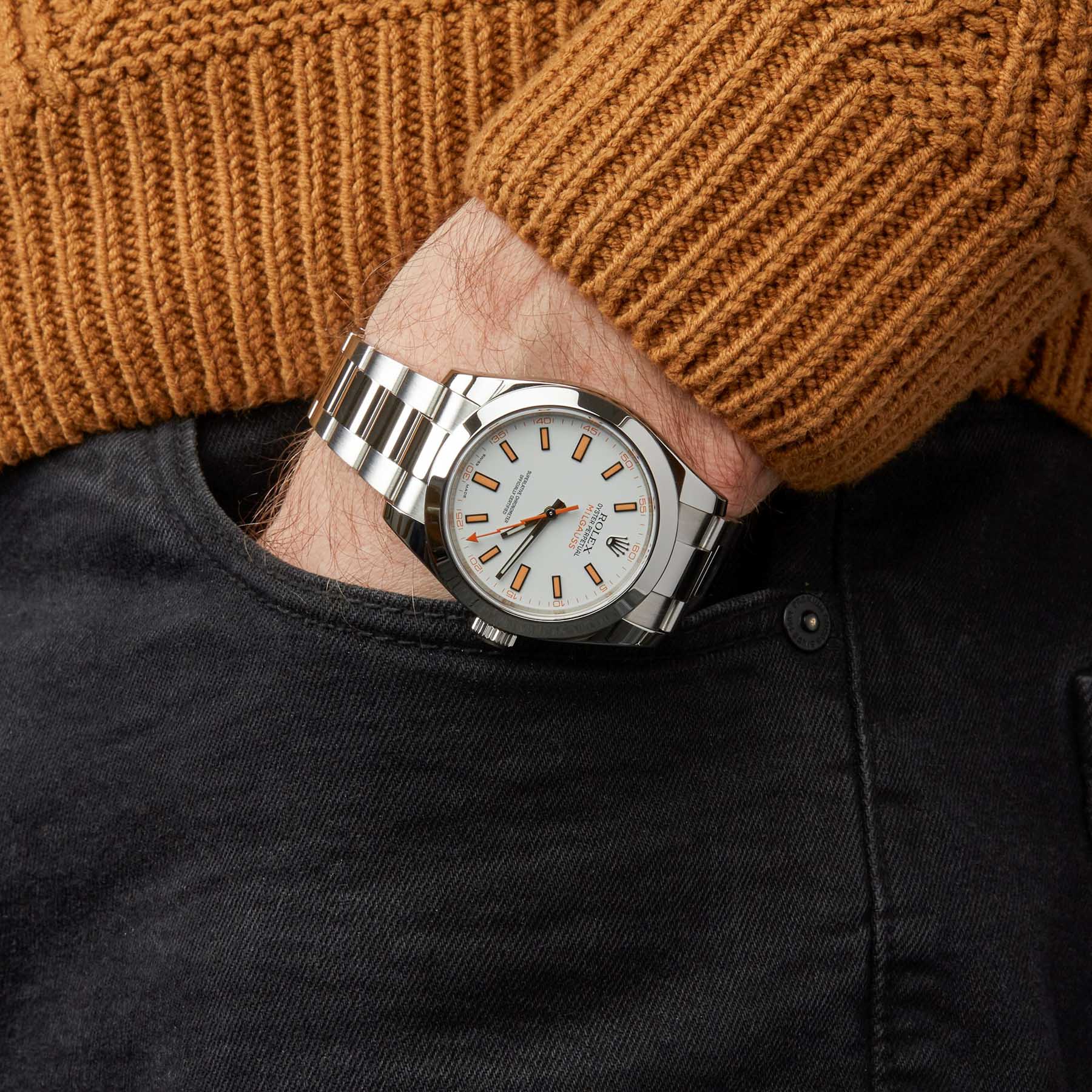 I must admit that upon researching them and keeping an eye on the offers, the white-dial version with its pumpkin-color hour markers and lightning-bolt hand is rapidly becoming more interesting to me. But, as always, I hesitate a bit with funky dial configurations like this as I’m not sure for how long I will like them. 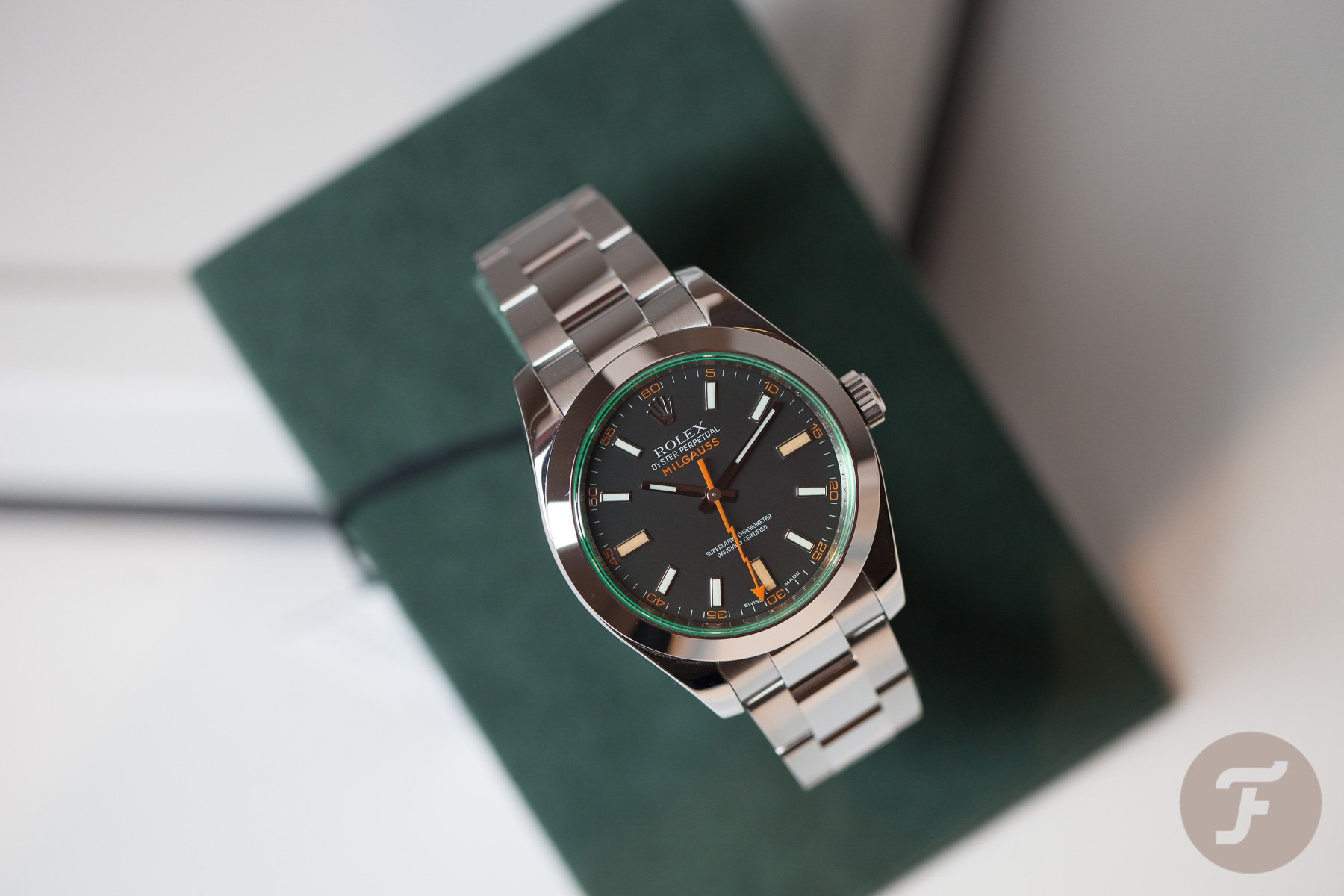 What makes the Rolex Milgauss 116400GV interesting to me is not the market value or that it might be discontinued in 2023. Rather, it’s the story behind it. It’s a watch aimed at scientists and engineers, like the IWC Ingenieur and the Omega Railmaster. Furthermore, the size of 40mm really speaks to me. It is a good size for a sporty-looking watch for my wrist. What I like about the 116400GV is the “GV” bit; the green sapphire looks neat. According to Rolex, it took years to develop and still takes weeks to produce. And though the green shade shows best in the crystal’s beveled edges, it actually spans the entirety of the glass. 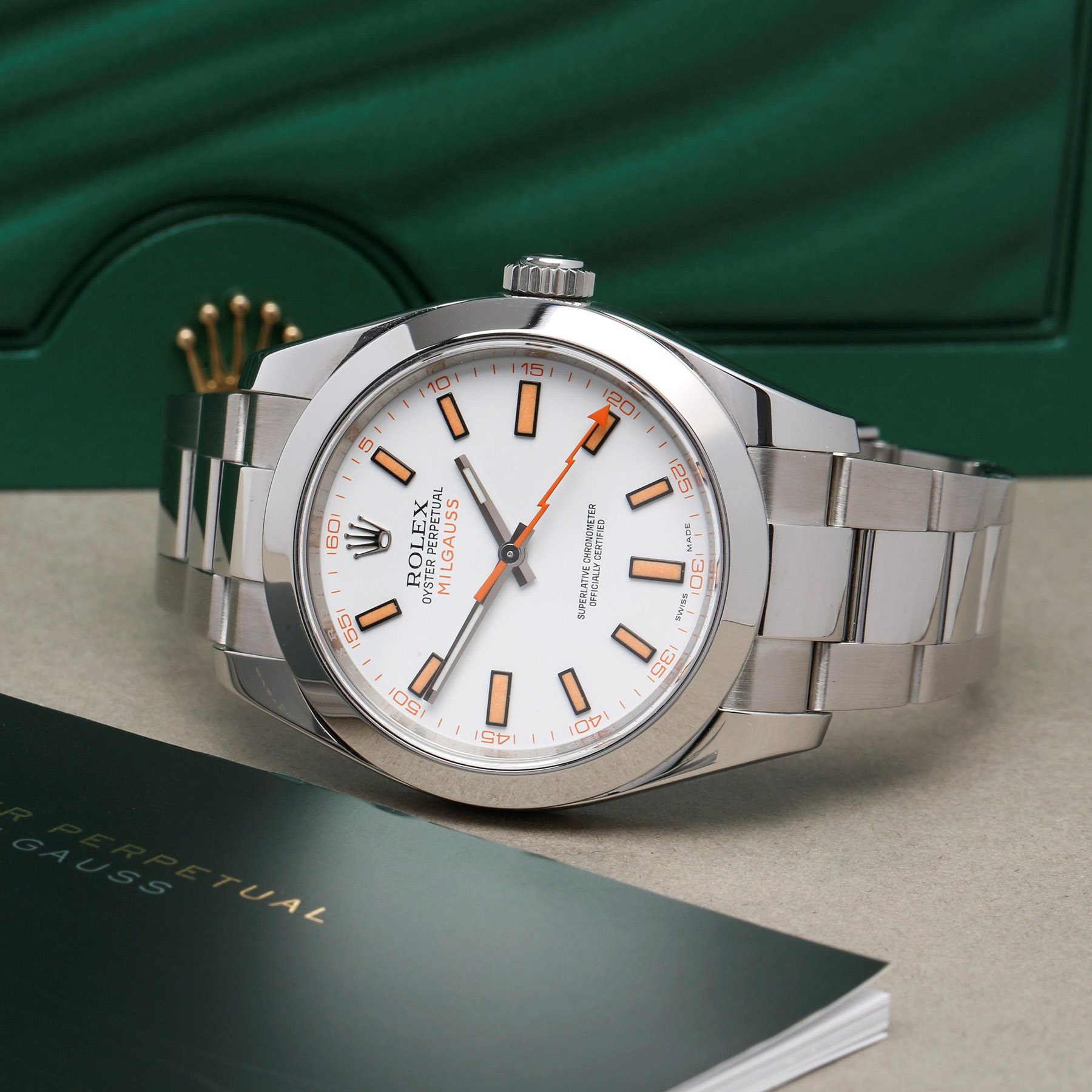 The case has remained unchanged since 2007 and comes with the typical beefy-lug design that was common back then. These days, people seem to prefer the thinner lugs once more, but I don’t mind the case shape of the Rolex Milgauss 116400 at all. I will aim for the black-dialed Milgauss with the green sapphire, but I might change my mind when I can handle the discontinued white-dialed version. The blue-dial version with its sunburst finish is the one that I care least about. The hunt is on

I guess, in the end, I like it because it’s so different from the other Rolex models. I suppose that’s why I was also always drawn to the Sea-Dweller rather than to the Submariner. And it’s probably also why I own a Yacht-Master 16622, which is not the most popular Rolex model. The Air-King could also be a good addition, but I prefer the Milgauss.

The Rolex Milgauss 116400(GV) has a water resistance of 100 meters, so no worries there either. It also has the Oyster bracelet with Easylink 5mm adjustment in the clasp, which is a handy feature. Yes, the hunt for my Rolex Milgauss is on! That said, it may have been better to save this story until after I scored one…

What are your thoughts on the Milgauss 116400(GV)? Do you like it, and if so, which version is your favorite? Let me know in the comments.