Who said that vintage watch collecting is a boy’s game?

Well, I don’t know who said that, but this is what the general understanding is. Our desire and goal at Fratello is to change that. To bring more female readers to watch collecting or #GTGs and prove the general opinion wrong.

Do you know who I most share my watch collecting passion with? The woman I now share my mortgage with. It is not any virtual cult club at some watch forum that I’ve never met face to face. All of my enthusiasm when unboxing a new watch is shared offline, right in the center of our living room. It was a vintage watch on my wrist that sparked mutual conversation in the early days before we ended up in a relationship. 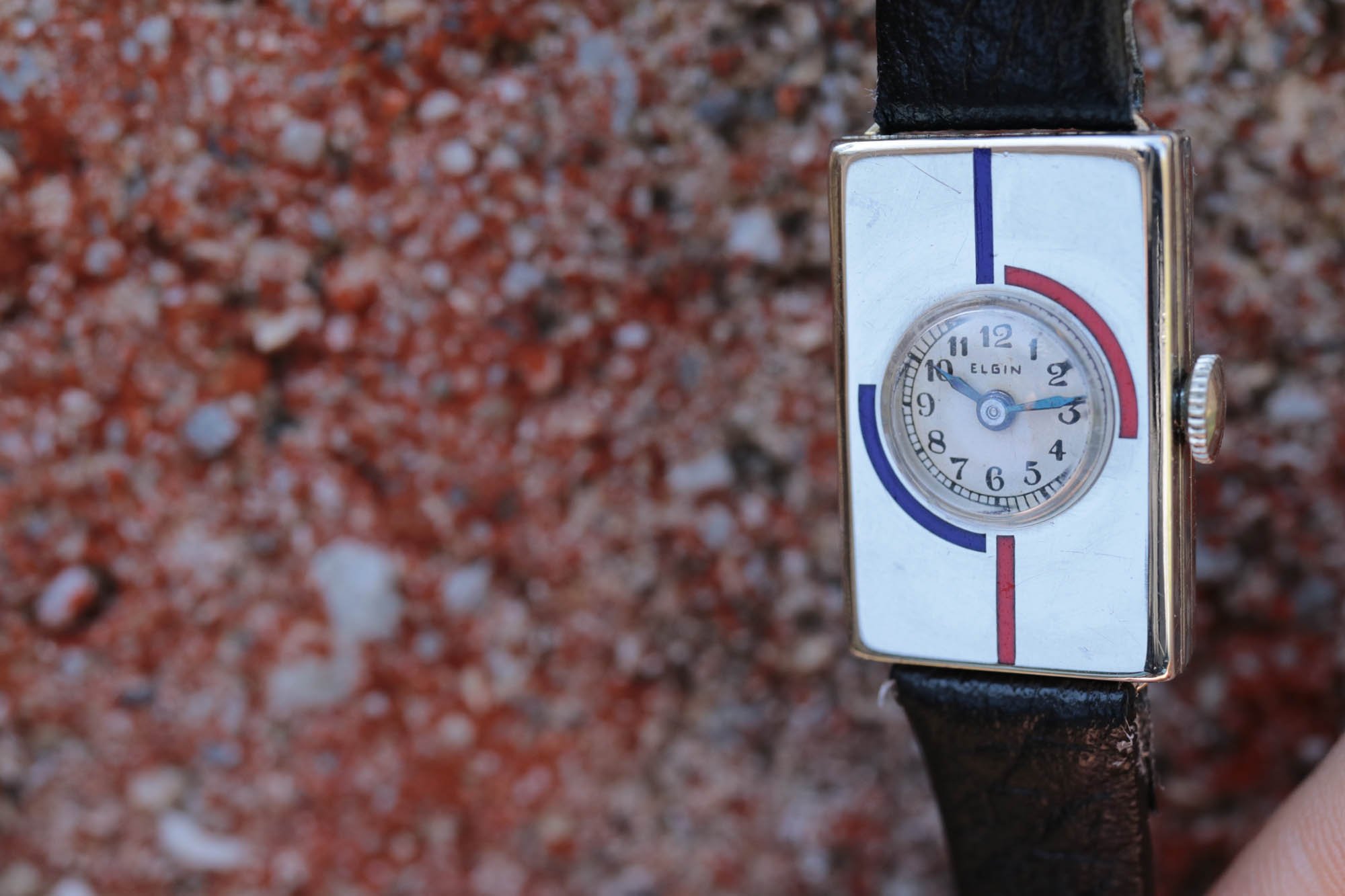 If you want to have some fun, log into any watch forum and read stories (or learn some techniques) on how to acquire a new watch without your partner noticing any impact on the family budget. I have to admit that having a partner with an affection for watches as big as your own, it makes a collector’s life much easier. A partner with growing sympathies towards vintage timepieces also makes buying gifts simpler. 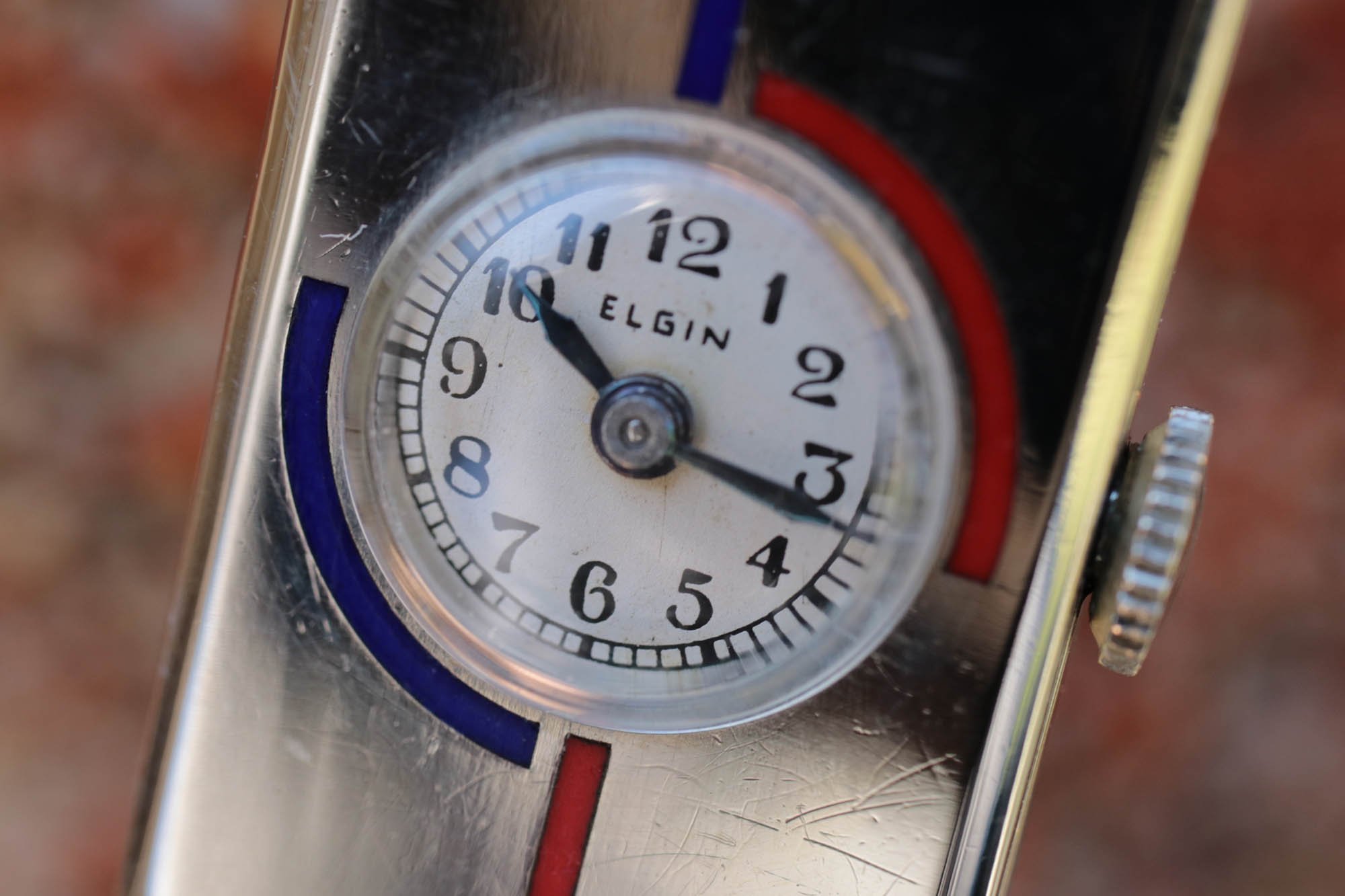 I was sitting in a cab on my way to London Heathrow when I got the latest newsletter from an Israeli dealer stocking mostly pre-1960 watches. I’d never bought a watch from him until I spotted this art deco Elgin. It wasn’t like the other watches in his store that featured ornamental, fat or over-glamourized edges and ostentatious case engravings so typical for that era. Don’t get me wrong, I don’t think they’re ugly, but just the idea of that kind of watch on my wrist always makes me feel older than Gandalf. 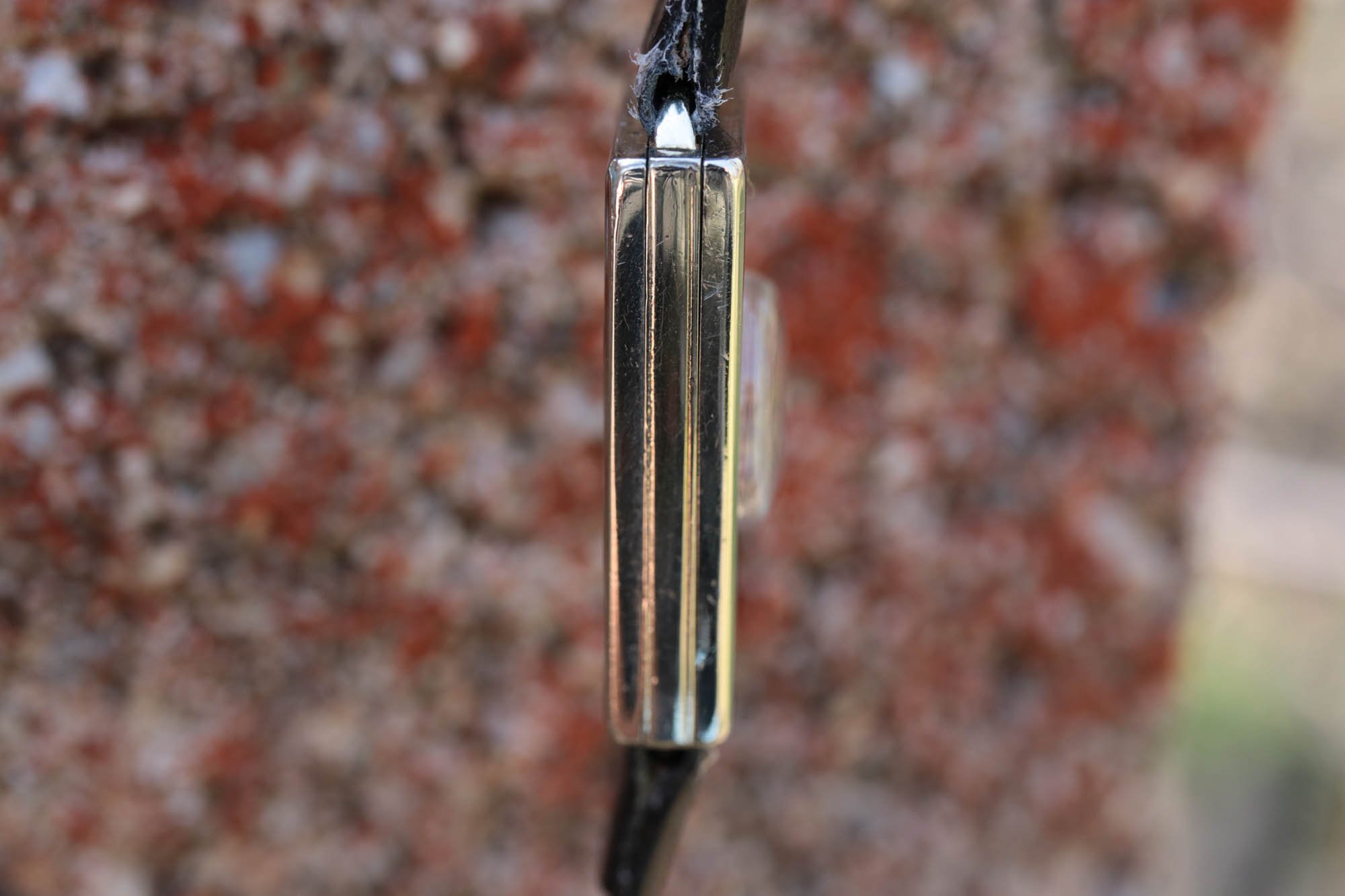 Different now and 90 years ago

A simple but perfect brick-like-shaped Elgin case perching in between 50 other art deco Gruens, Bulovas and Hamiltons sticks out like a sushi set in the middle of 50 burgers. It wasn’t surprised to learn that this model belongs to a special series of designs named Elgin Parisienne. All six cases were designed by (as cited in a print ad from that era) internationally famed Paris creator Lucien Lelong. The watches were introduced 90 years ago and could be yours for $35 (equal to some $500 today). 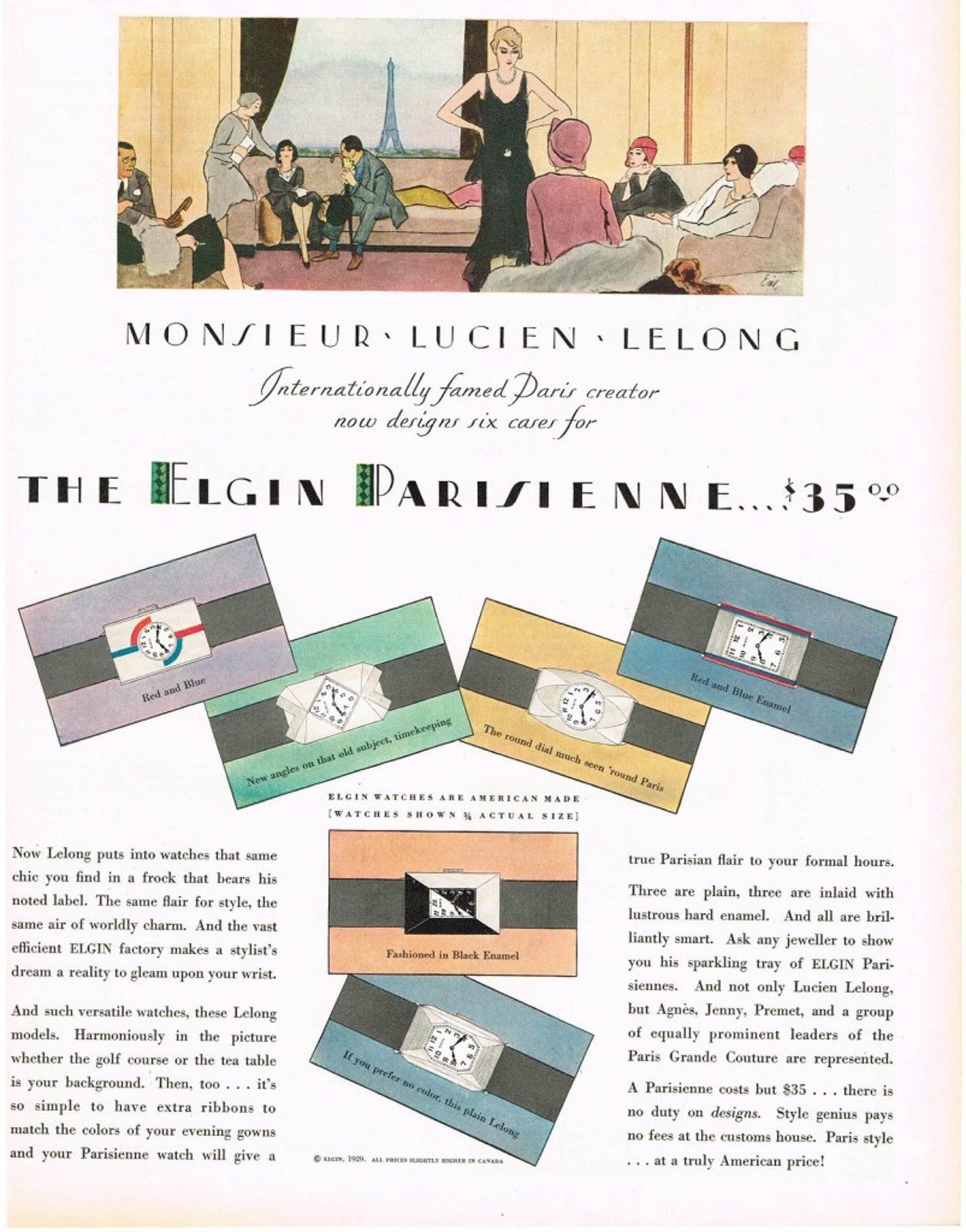 The Elgin Parisienne line was first introduced as a fashionable watch line in 1928 before the Great Depression. It is important to realize that at that time, a lot of Americans wore pocket watches. Elgin decided to play a huge style game, pitching the major claim that watches couldn’t just be good, they had to be good-looking and fashionable. Chic. They had to match your hat, handbag or shoes, to create the perfect “ensemble”. Paris haute couture was a big inspiration and Elgin made it all come from France right to the US. It was a successful move, with more than 150.000 Elgin Parisiennes sold within the first year. By 1935, 85 percent of the watches made in American factories were wristwatches, a dramatic increase from 15 percent in 1920. Parisiennes helped for sure. 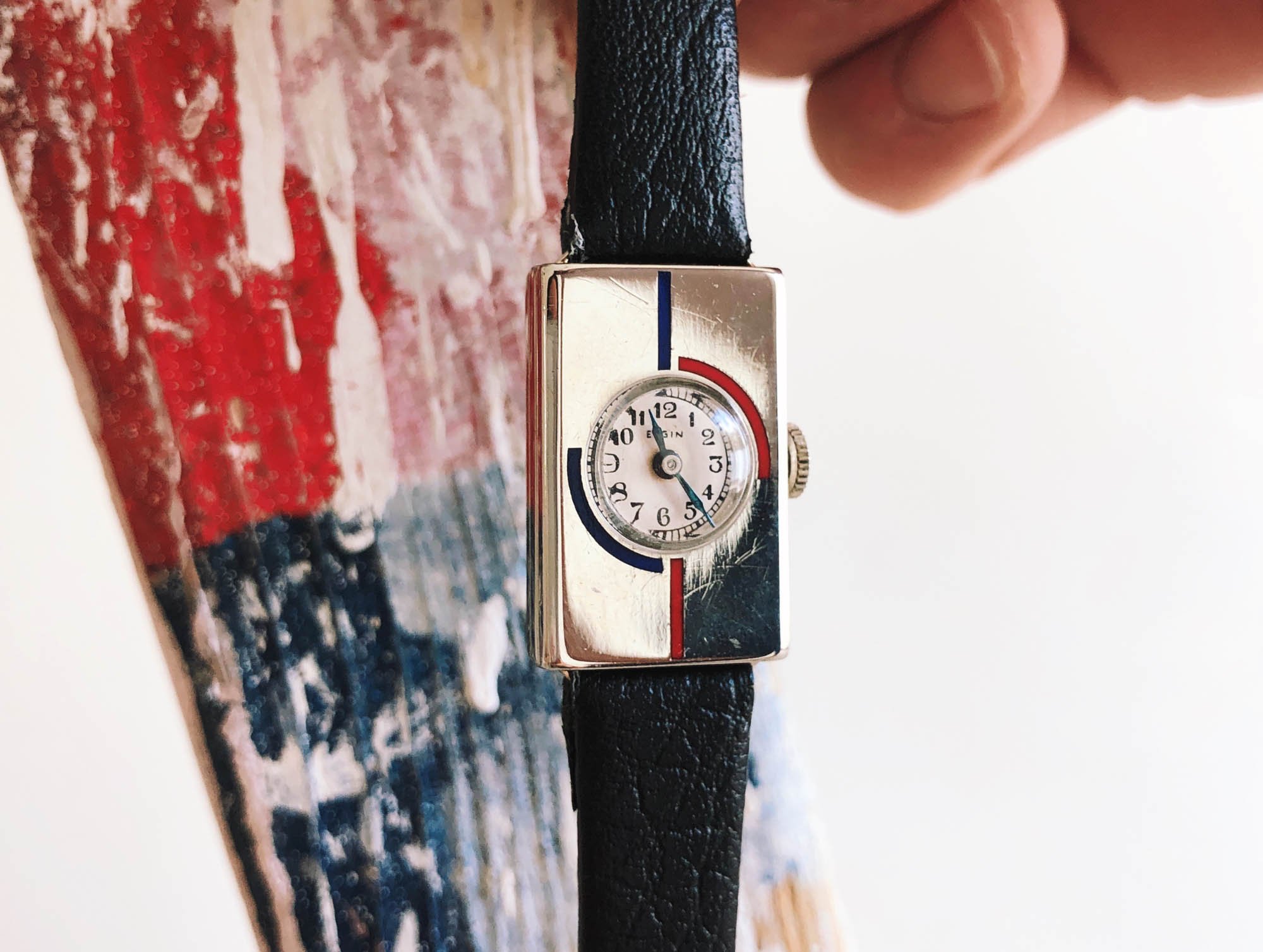 With more than 150.000 Parisiennes sold within the first year, Elgin made a successful move.

Lelong was one of the famous couturiers of the Rue de la Paix next to designers Agnes, Jenny or Premet that were also asked to model cases for the Parisienne line. By 1926, Lelong employed a staff of 1,200. Finding out that Lelong was later known as a savior who prevented the occupying German forces from moving the entire industry to Berlin during WWII gives this watch extra relevance. Lelong’s style was influenced by sports and the idea of the body in motion. You should check out his fashion designs, as his prominent clientele included names such as Greta Garbo or Rose Kennedy.

Reading old catalogues or newspaper clippings always proves to be fascinating. “Elgin Watches are good watches. Elgin watches always will be good watches. The Elgin Watch company has made 37 million True Time Telling Watches in the last 65 years and are today the largest producers of high-grade watches in the world,” A stark claim featured in a little print ad in Nebraska’s Lincoln Journal Star promoting the Elgin Parisienne in May 1929.

Elgin Parisiennes were promoted a lot

I am happy to see that this particular model out of the six Lelong designs was promoted more than the rest. It is worth mentioning that every advert showing the Elgin Parisienne was different. Next, to full-page introductory promotions, we can find many smaller black & white little adverts, often created by and paid for by local watch dealers would be my guess. It would also explain the different writing style – sometimes short, punchy and technical, sometimes more brand storytelling like. 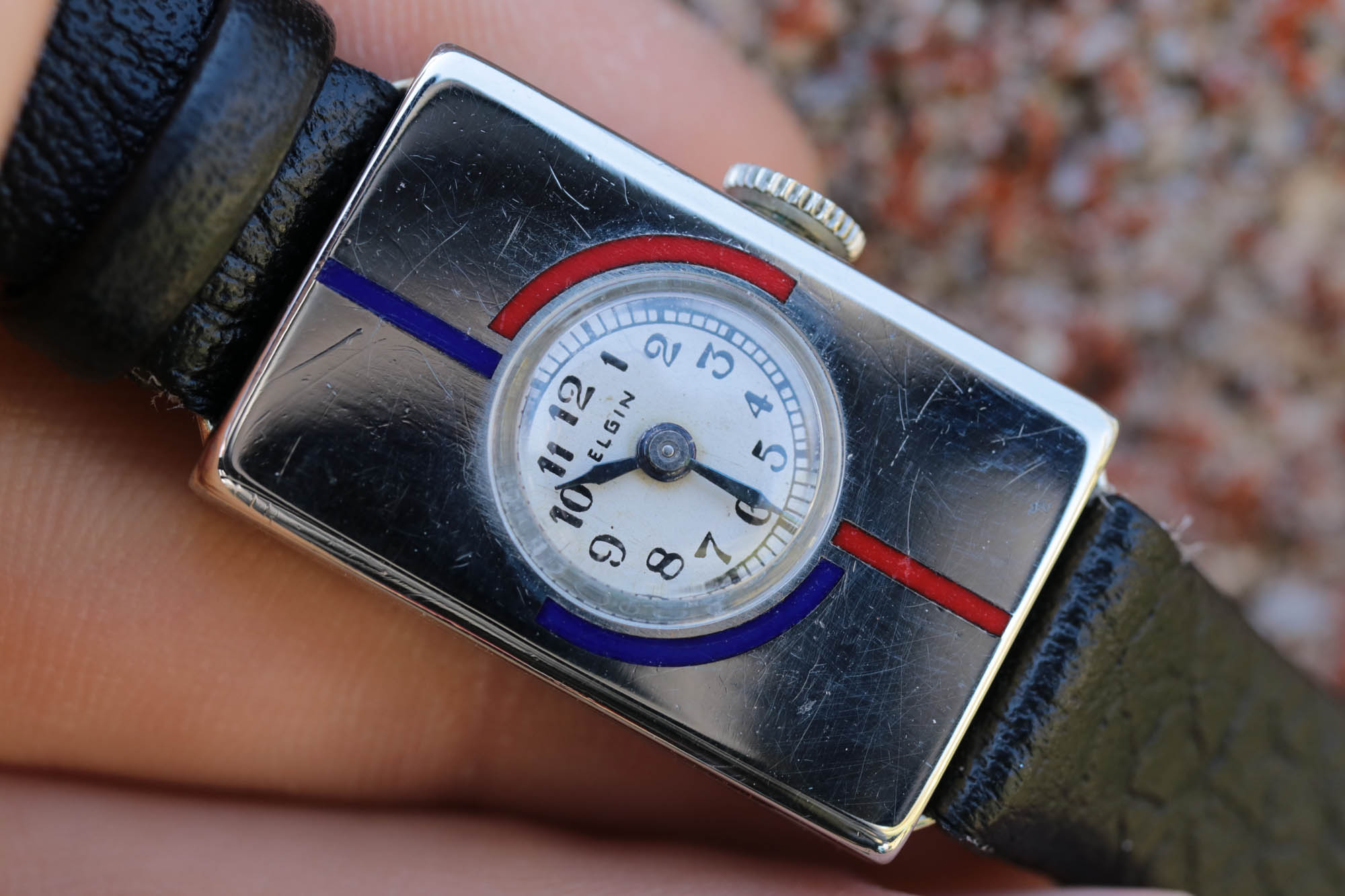 Collecting tiny bits of information from each advert adds some spice to the story. We can learn things such as the fact that ordering and mailing Elgin Parisienne watches to any address upon receipt was a standard game back then. Also, it was possible to get the watch on unusual loan-like terms for just $1.00 a week. Interesting enough. 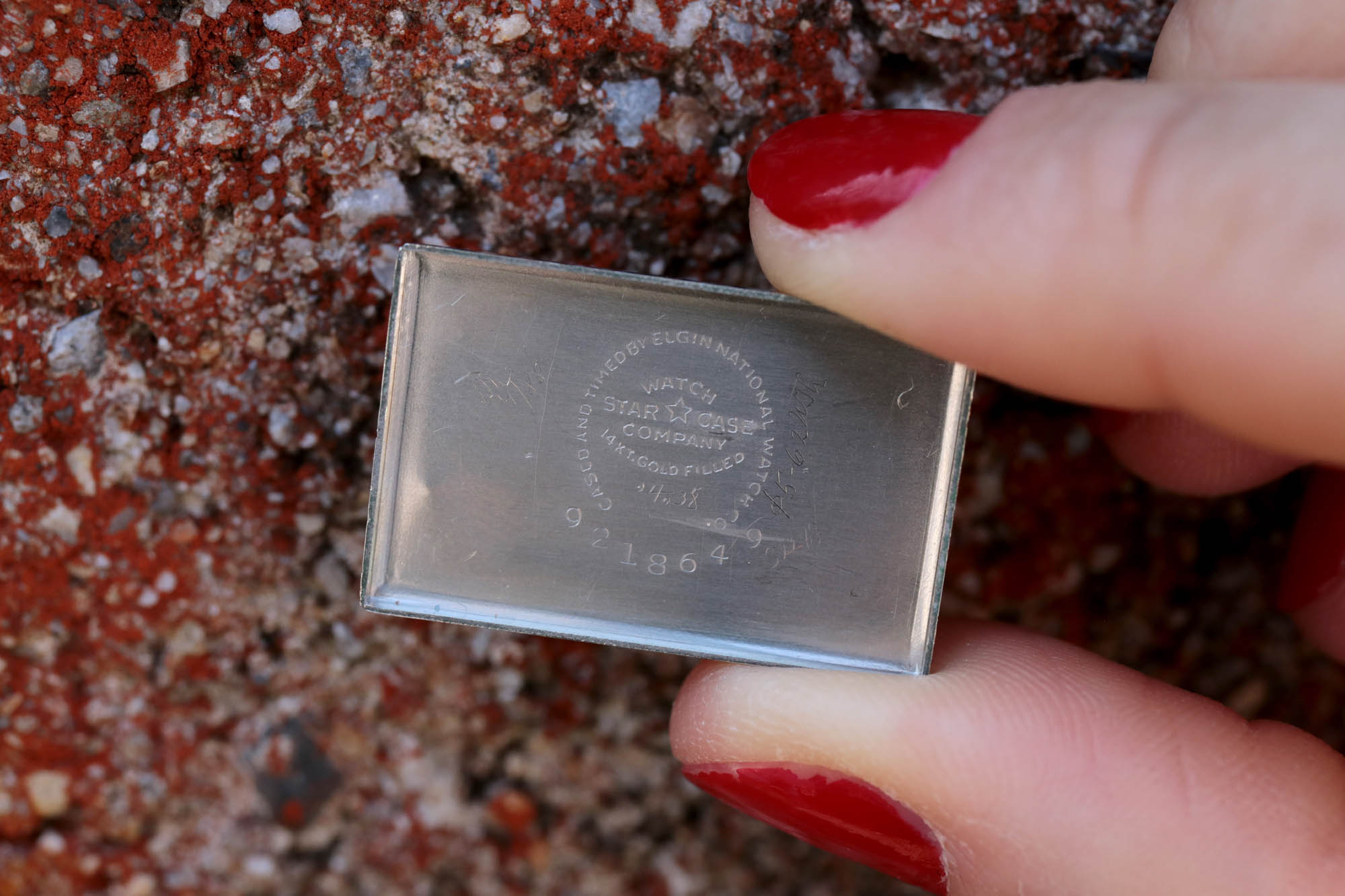 I am not sure about the other designs, but this Parisienne model with a little round dial strikes me most. Thanks to its simplicity it looks like a watch from the future, not like a watch from the past. The 14k white gold fill case is half cut in the front with red and blue enamel. Both straight and arc enamel finishes are complete, perfectly flat and have kept their rich tones till this day. While researching this article, I bumped into its color twin – a second model featuring black enamel. It was advertised as not working, but I’m hoping my watchmaker will get it fixed. As the case is in perfect condition, it would make great colorful duo. We will see in months to come. 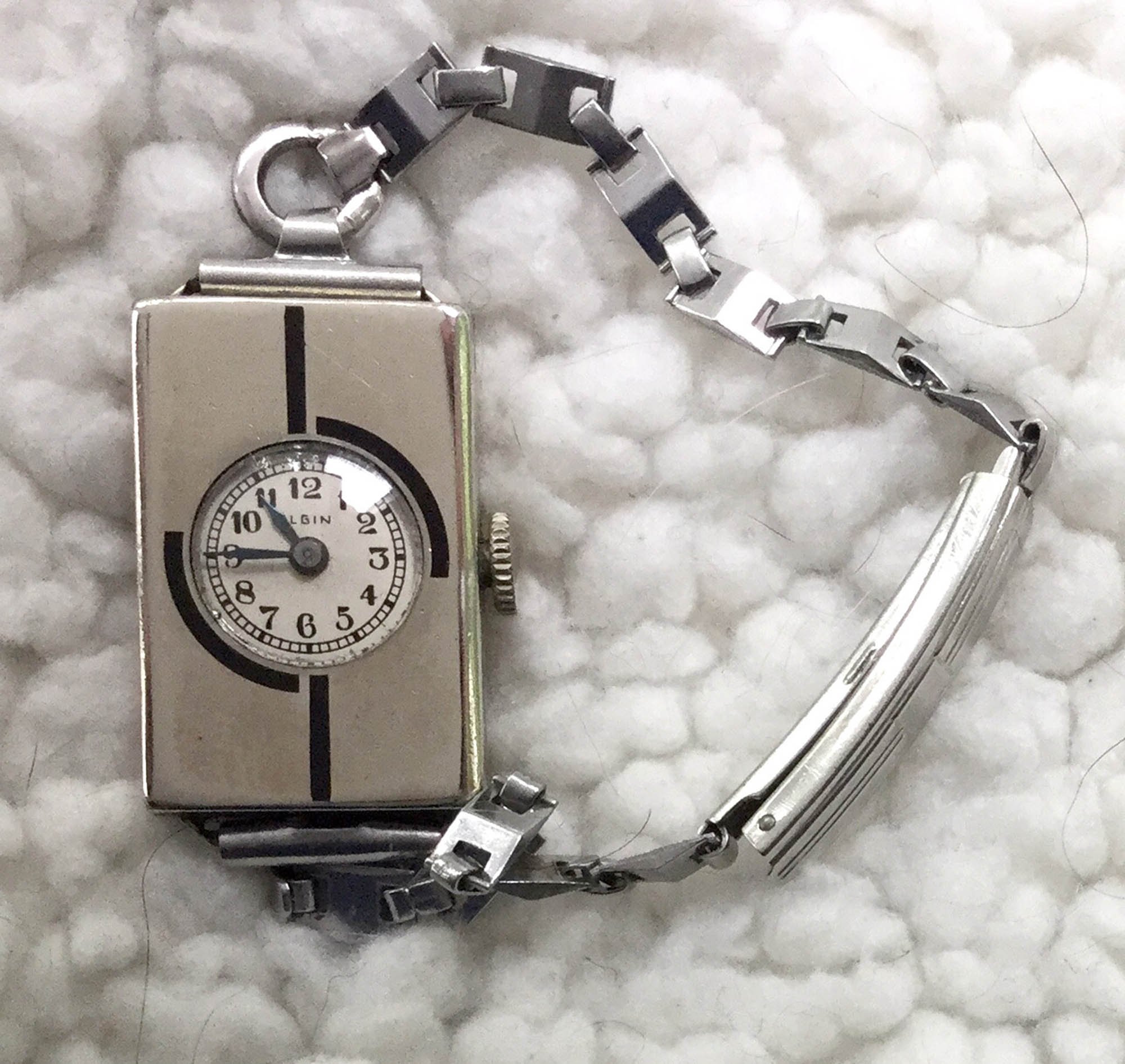 Speaking about the non-functional movement in the second piece we bought, Lelong’s models are powered by the Elgin 488 movement. Breguet hairspring, 7 jewels only and no second hand. But look at the movement engravings. However simple the caliber is, it makes for a spectacular show. I mean, the serial number looks like a statement! When it comes to function, I haven’t worn it much. My wife says it ticks strong and wears extremely lightly. Its precision within two minutes also makes it quite a reliable companion. 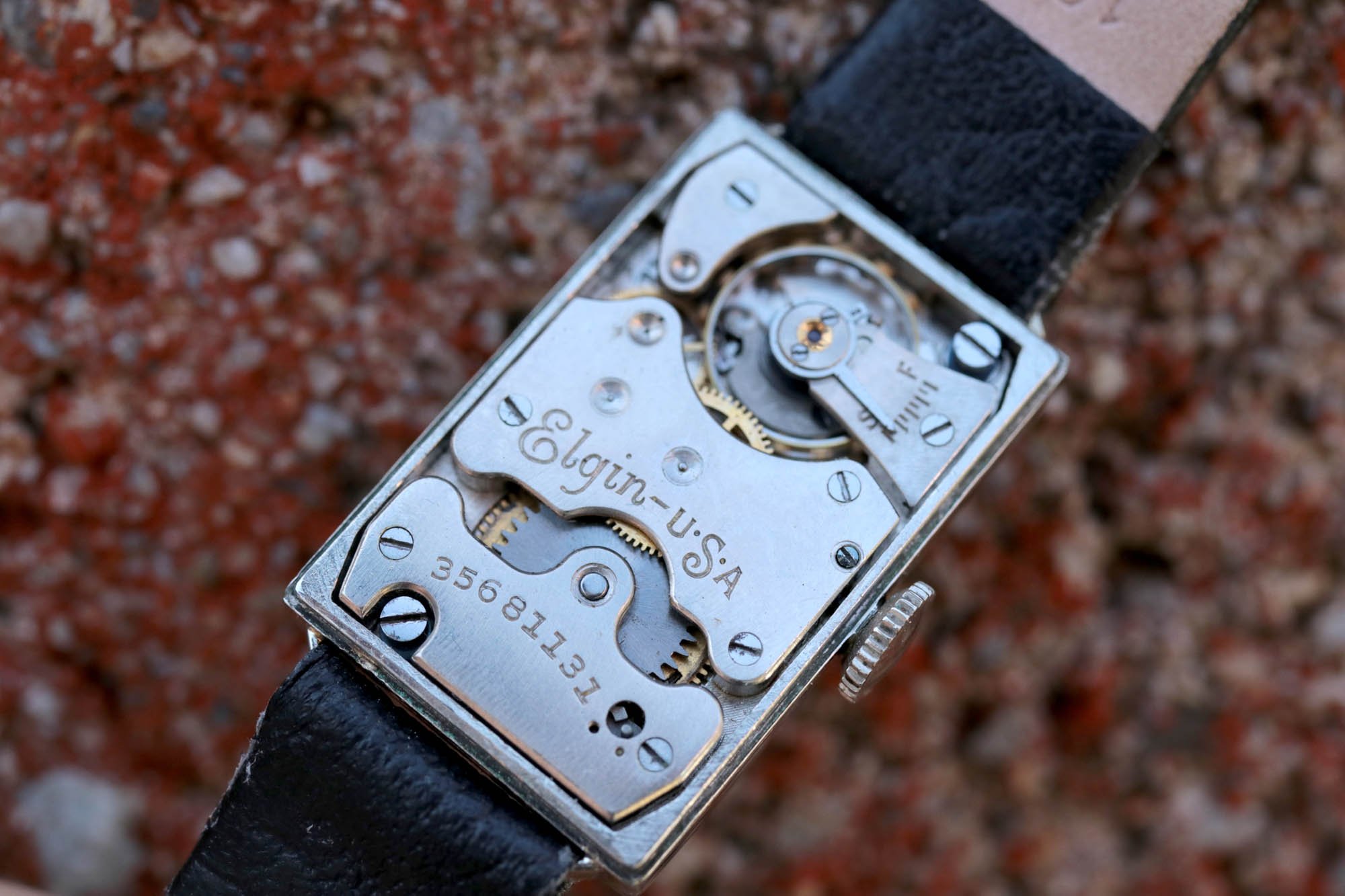 Did I say it is a reliable tool? Yes, I did and yes, it is. It is a stylish and unique watch but that’s about it as this particular Elgin Parisienne is not very useful for telling the time. It is one of the few watches that are actually much smaller in real life than they look on pictures. Trust me. The case has only 26 mm in height and 17 mm in width, which makes the dial slightly bigger than 10 mm in diameter. I initially thought that I might wear it from time to time, but I most likely won’t. It was a bit of a disappointing unboxing. But only for a while! My wife has grown fond of it though and enjoys it as a refreshing fashionable accessory to her outfits. It is no outlier in her growing watch collection – Lelong’s Elgin Parisienne gets worn just as often as the others. And to be honest, if you really try, you can read the time. 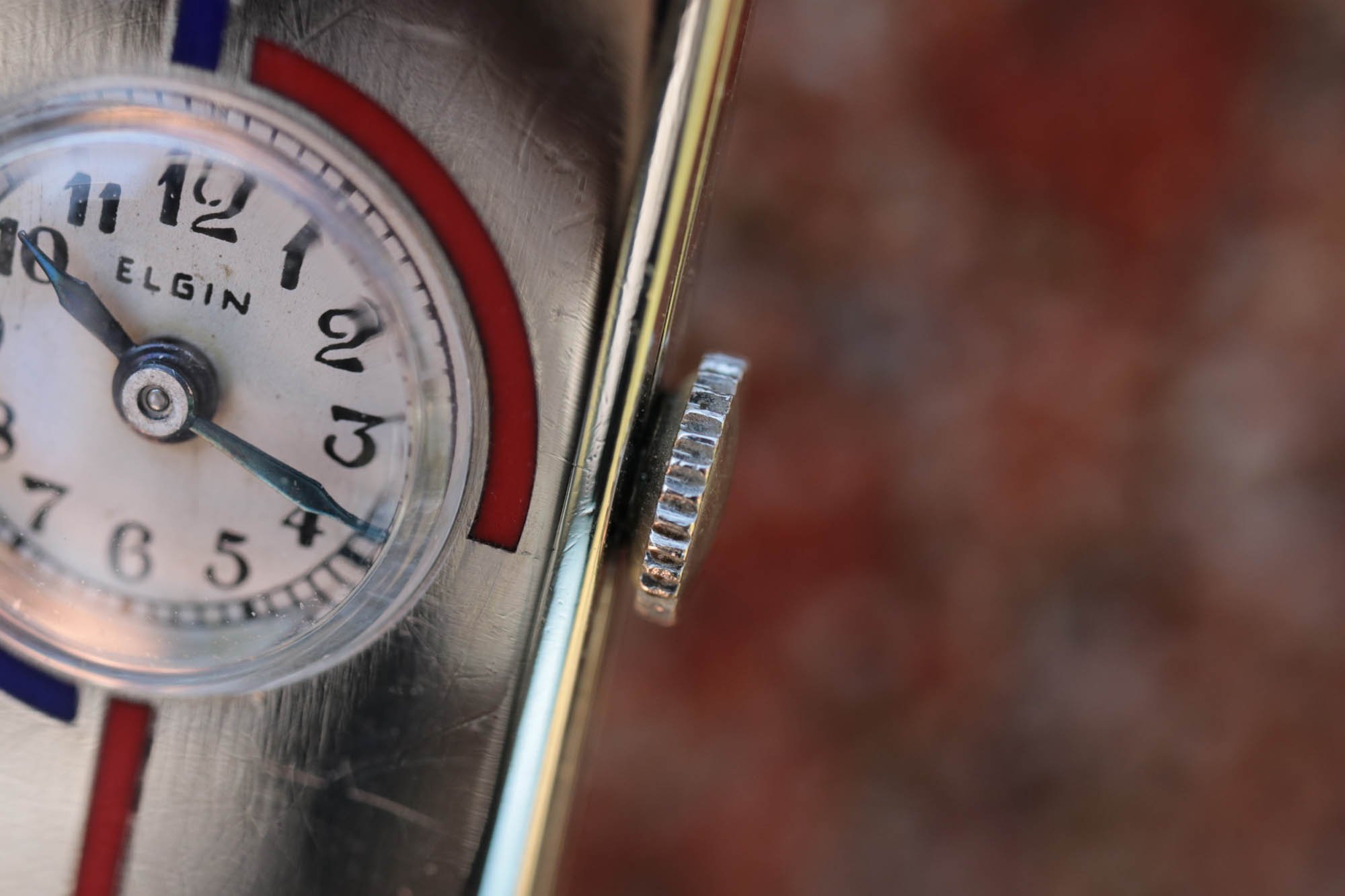 The least decorated model from Lelong’s Parisiennes sextet is an unexpected surprise by all means. There aren’t many other 90-year-old watches women can put on their wrist and still feel like they brought it from their last trip to the future. The hands, dial and fragile looking case are preserved in fantastic condition. If we hadn’t been screwed by local customs, we could have said that for a few hundred dollars we got a watch-duo that mixes style, uniqueness, story and interesting historical context.

Do you know or have a female friend with a passion for collecting interesting vintage watches? Let us know. It seems the realm of horology hides some remarkable stories behind feminine watches too.

Hot Topics
Laventure Automobile Chronograph With A Proprietary Movement — Marking A Huge Leap Forward For One Of The Industry’s Most Promising Brands
147 comments
Fratello Exclusive: An Inside Look At The MoonSwatch Production Facilities
65 comments
Sunday Morning Showdown: GMT Wars Part Deux — Rolex Vs. Grand Seiko
60 comments
Selling Your Watch To A Dealer Or Trading It In — Tips From A Former Watch Dealer
49 comments
The Top 10 GMT Watches Right Now — From Ball, Grand Seiko, Tudor, And More
44 comments
Popular
Grand Seiko SBGA211 ‘Snowflake’ And Why I Didn’t Buy It
Robert-Jan Broer
22
You Asked Us: Tissot Powermatic 80 Seastar 1000 or Longines HydroConquest
Robert-Jan Broer
16
Oris Classic Date Or Save Up For an Omega De Ville Prestige?
Robert-Jan Broer
17