Welcome back to Wrist Game or Crying Shame, the weekly series that aims to make all of your New Year’s Resolutions come true! This week, we take a look at the Omega Speedmaster Reduced, reference 3510.50.00

Fear not, Mike fans. I’m not taking-over this column permanently. I’m just standing-in for everyone’s favorite bargain (or not) hunter for one week and one week only. So what have I decided to put to you during my time in the hot seat? I’ve chosen a model that has given me some sleepless nights. Is it a quiet classic? Is it an unfortunate misadventure? There are strong opinions on both sides, so I’m turning it over to you, the Fratelli, to make a sound judgment. I bring you the Omega Speedmaster Reduced 3510.50.00 in all its (questionable glory). 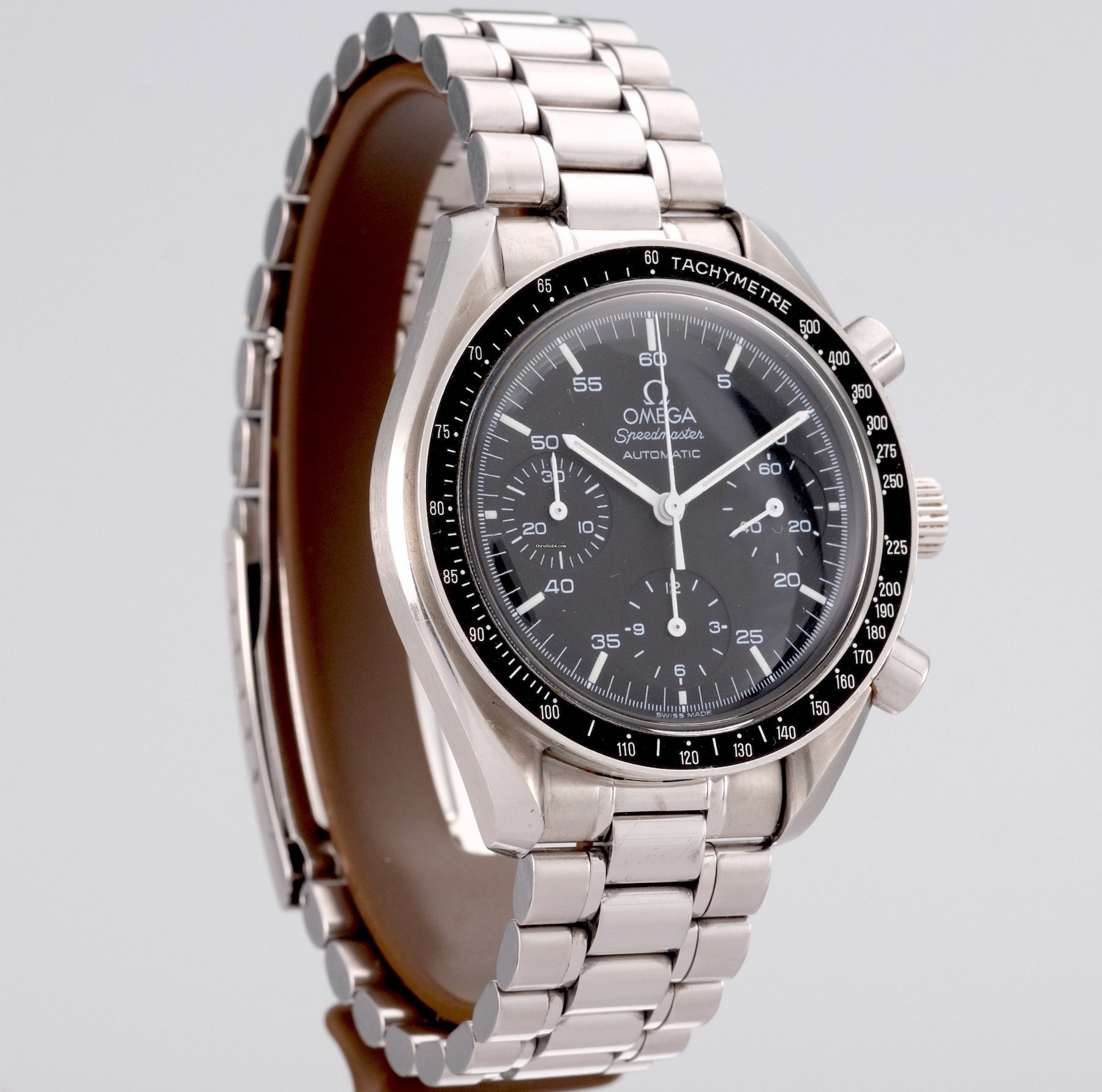 Last time out, Mike presented the Audemars Piguet Royal Oak Military Dial from the year 2000. That model, like the Reduced, is a bit of an outlier. Its boxier profile was intended to widen the appeal of an already-established range. But it did not fare so well with our discerning audience, as 62% of you saw it fit to dishonorably discharge the ill-fated AP.

Production of the Speedy Reduced began in 1988, running until 2009/2010. While you might assume that the Reduced was, because of its name, significantly smaller than the standard Speedmaster, it’s not that different. Although the listing states it is 39mm, these models come in a little narrower than that at 38.5mm excluding the crown and pushers (it is 45mm lug-to-lug). It certainly wears smaller than a regular Speedmaster with a 39mm diameter (and a lot smaller than the popular 42mm variety), but it isn’t as tiny in comparison as the name suggests. Omega used it as a canvas for expression. As such, it was the subject of several special editions and country-specific models (notably Japan). 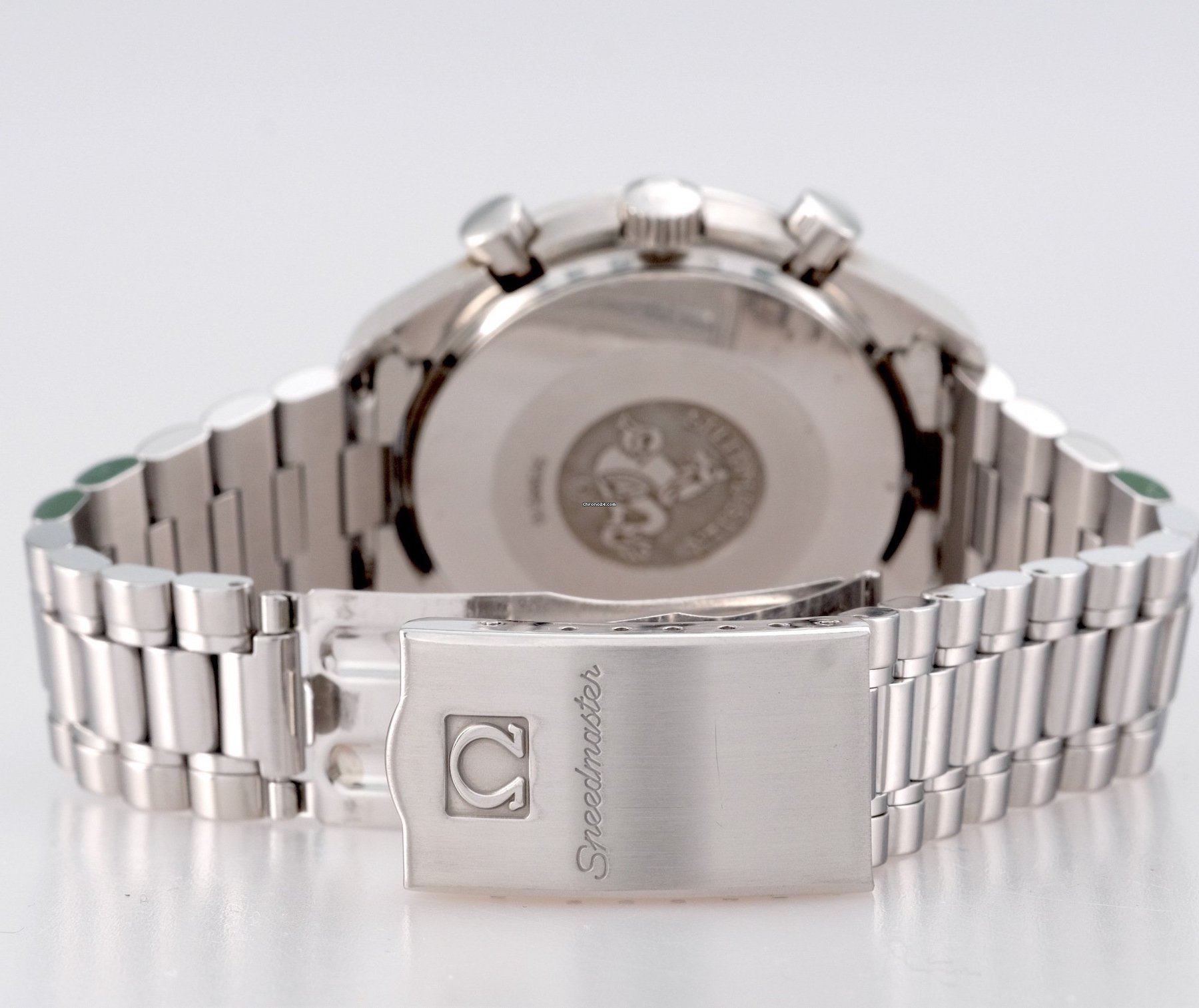 The Reduced got its name from not just its width, but also the movement used, which was a budget alternative to the calibers used in the Speedmaster Professionals of the day. Powering the Omega Speedmaster Reduced is base caliber ETA 2890-A2. The 2020 chronograph module from Dubois-Dépraz is bolted on top, changing the movement reference to 3220.

As long as the base movement is running well, there should be no problems with the chronograph function…

During my time at the bench for Omega, I worked on a few of these models. As much as I enjoyed fiddling around with the module, I have to admit they often took a little more patience to get right. As long as the base movement is running well, there should be no problems with the chronograph function. However, given its use draws on the power of a movement initially designed to run solo, you’ve got to make sure you have a healthy amplitude before you stick the two together. 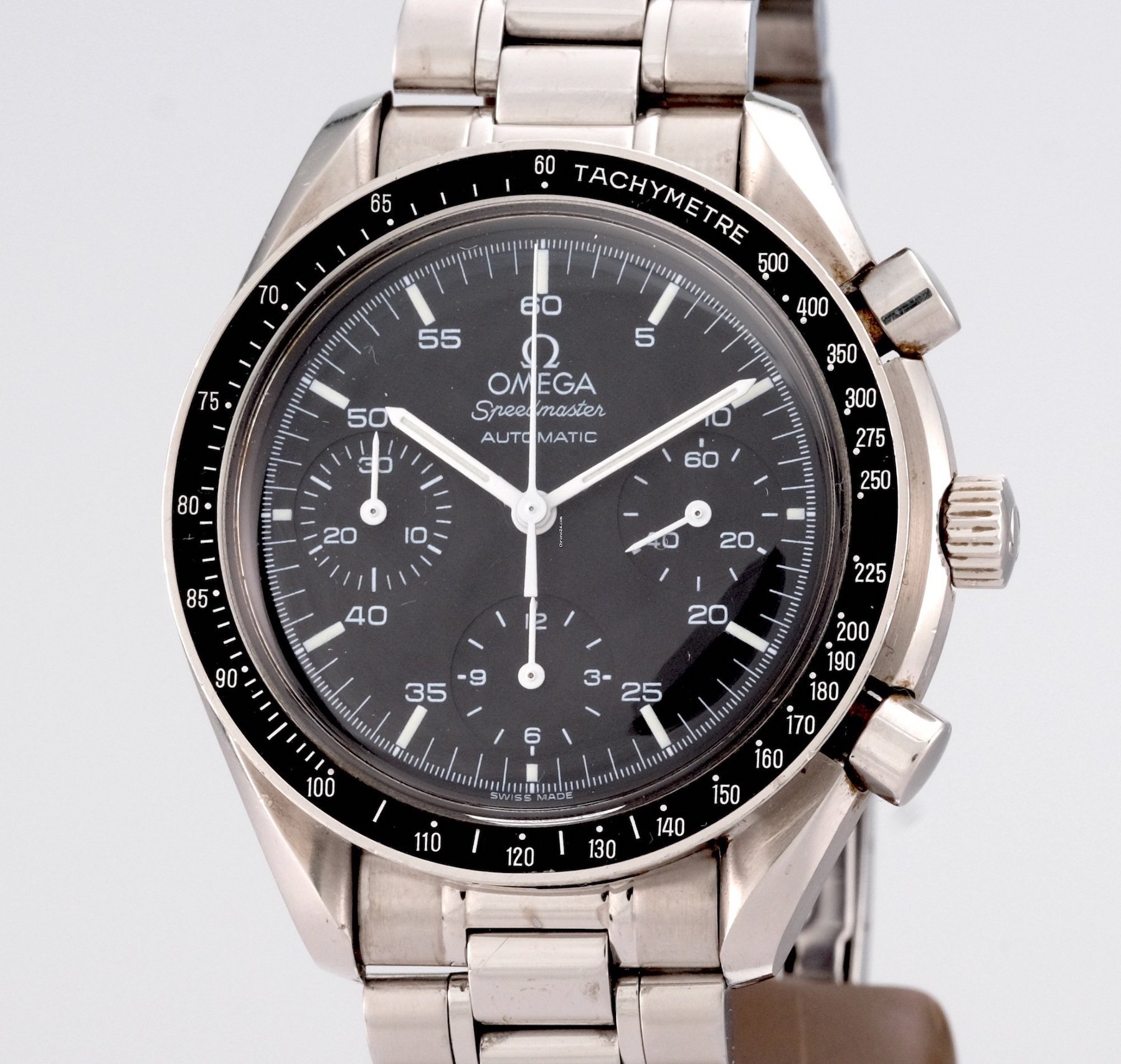 A different dial and odd pushers

But the truth is that any decent watchmaker with Omega accreditation should be able to get these things purring along nicely. The question from a consumer perspective comes down to how you feel about the dial layout (which is vastly different from the regular Speedmaster’s) and the odd positioning of the pushers in relation to the crown.

When it comes to integrated chronographs like the Speedmaster Professional, the pushers and the crown all sit on the same horizontal plane. That’s because they are engaging with the same movement at the same height. When it comes to modular chronographs like the Reduced, the pushers are effectively engaging with a separate mechanism that sits on top of the base. There is a pretty undeniable ergonomic argument for the improved wearability of a modular chronograph for this reason (the higher-set pushers offer increased wrist mobility). Still, you rarely hear anyone make that point in seriousness because the gains are minimal at best. I mean, how many times have you, a chronograph wearer, been extremely bothered by the pushers digging into the back of your hand? I’d wager not so often. But it isn’t outside of the realms of possibility… 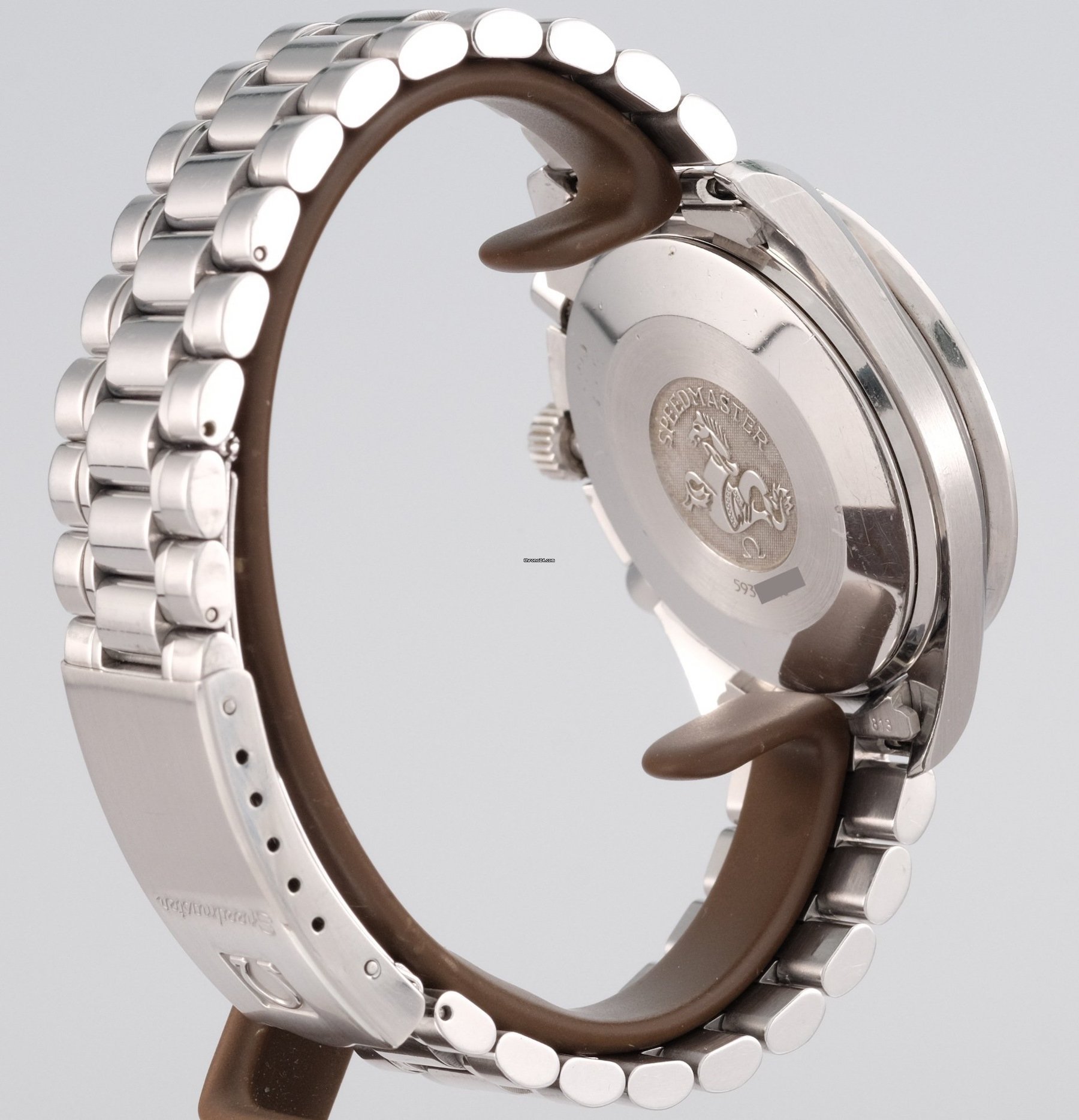 A quick search for Omega Speedmaster Reduced models on Chrono24 yields a couple of hundred options. A great many of the best-preserved examples come from Japan (presumably given the model’s one-time popularity in that region). Although a lot of these pieces are very reasonably priced, import duties from Japan can run quite high, so check that before ordering.

The specific model I’ve chosen for today’s debate is located in Germany, from a seller I’ve bought from myself. The charmingly named “LOVE AND FUN PRODUCTION UG” has three Speedmaster Reduced models available running from €1,700-€1,800. As always, shelling out for the best condition you can afford is advised, so I’m running with the €1,800 model throughout this article.

The other two options are decent, but each has its foibles. One has a pretty noticeable ding on the bezel around 7 o’clock, and the other’s lume has aged to a warm yellow. If this kind of patina is to your liking, it is a great option. I’m staying away from it because I’m a stickler for fully-intact lume on the hands when the dial lume has aged (replacing aged hands with new looks abysmal when they don’t match the dial patina). 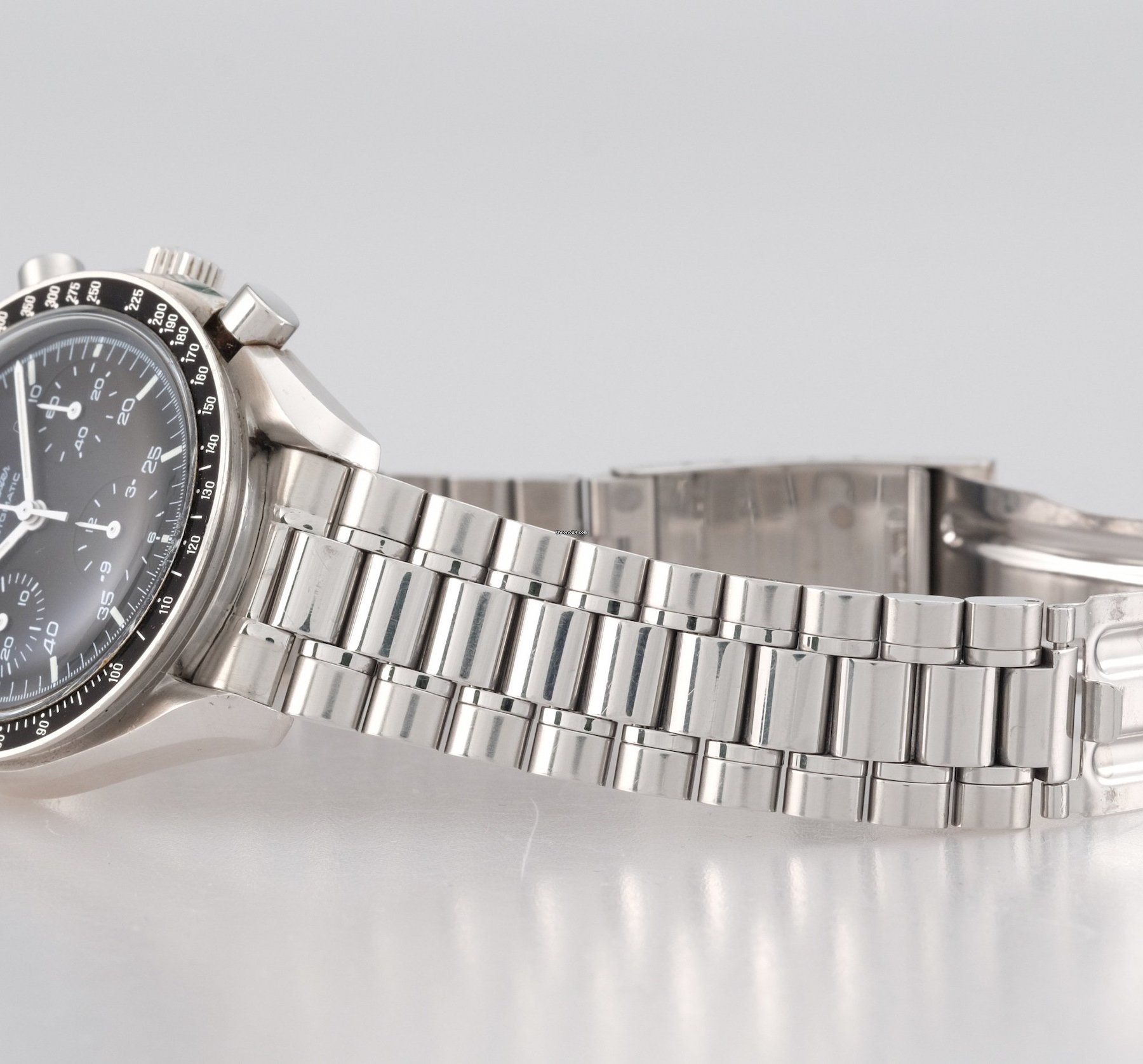 So the listing in question can be found here. It comes with papers but is without the box (which never bothers me, but each to their own). Delivery is €40 and, in my experience, surprisingly rapid. (The watch and photos are the property of the seller) The question is, how worthwhile is adding an Omega Speedmaster Reduced to your collection? Some will see it as a quaint deviation from the norm — a charming alternative to the increasingly popular Speedmaster core. Others will see it as a patent waste of money and wrist time — “It’s not a real Speedy,” I can already hear them cry. “Why bother?”

Well, that may be a good question, but maybe, just maybe, all the attention directed to the real Speedmaster collection could end up having a positive effect on the value of these unusual, incredibly affordable anomalies. But as we must always assert, nothing is certain when it comes to the resale value of watches. So judge this piece on its aesthetics alone. What do you think? Go ahead and vote, and please let us know what you think of the Speedmaster Reduced’s past and possible future in the comments section below. All images courtesy of LOVE AND FUN PRODUCTION UG via Chrono24.

Hot Topics
Introducing: The New Seamaster Professional 300M 60 Years Of Bond — With A Special Animated Case Back
100 comments
It’s Time To Invest In A Dress Watch — Our Picks From Breguet, Omega, Grand Seiko, And More
67 comments
Are You Still After An Omega × Swatch MoonSwatch?
65 comments
Sunday Morning Showdown: The Tudor Pelagos Provocation — Pelagos Vs. Pelagos 39
55 comments
The Rolex Waitlist Conundrum — How Much Will The Price Of Your Watch Increase While You Wait?
48 comments
Popular
Two Patek Philippe Nautilus Watches: 3700/1A Versus 5711/1A
Robert-Jan Broer
16
Omega Speedmaster Hodinkee 10th Anniversary Limited Edition
Robert-Jan Broer
7
You Asked Us: Rolex Submariner vs Omega Seamaster
Robert-Jan Broer
24