The French Navy, or “Marine Nationale”, has been sailing the seven seas since 1626 making it one of the oldest naval forces in the world. When a watch fan hears the words “Marine Nationale” they think of watches and watch straps instead of frigates. In the recent past, members of the French Navy used sturdy watches from brands like Tudor, Doxa, and Longines. These are generally collectible watches nowadays with a traceable and detailed history. The YEMA Navygraf Marine Nationale GMT Limited Edition watch is not a replica of a vintage YEMA. The newest Navygraf marks the start of YEMA’s military career since the company is now, for the first time in its history, an official partner of the French Navy, joining the ranks of the aforementioned watches. The new watch is also a bit of an homage to a colorful and diverse history. 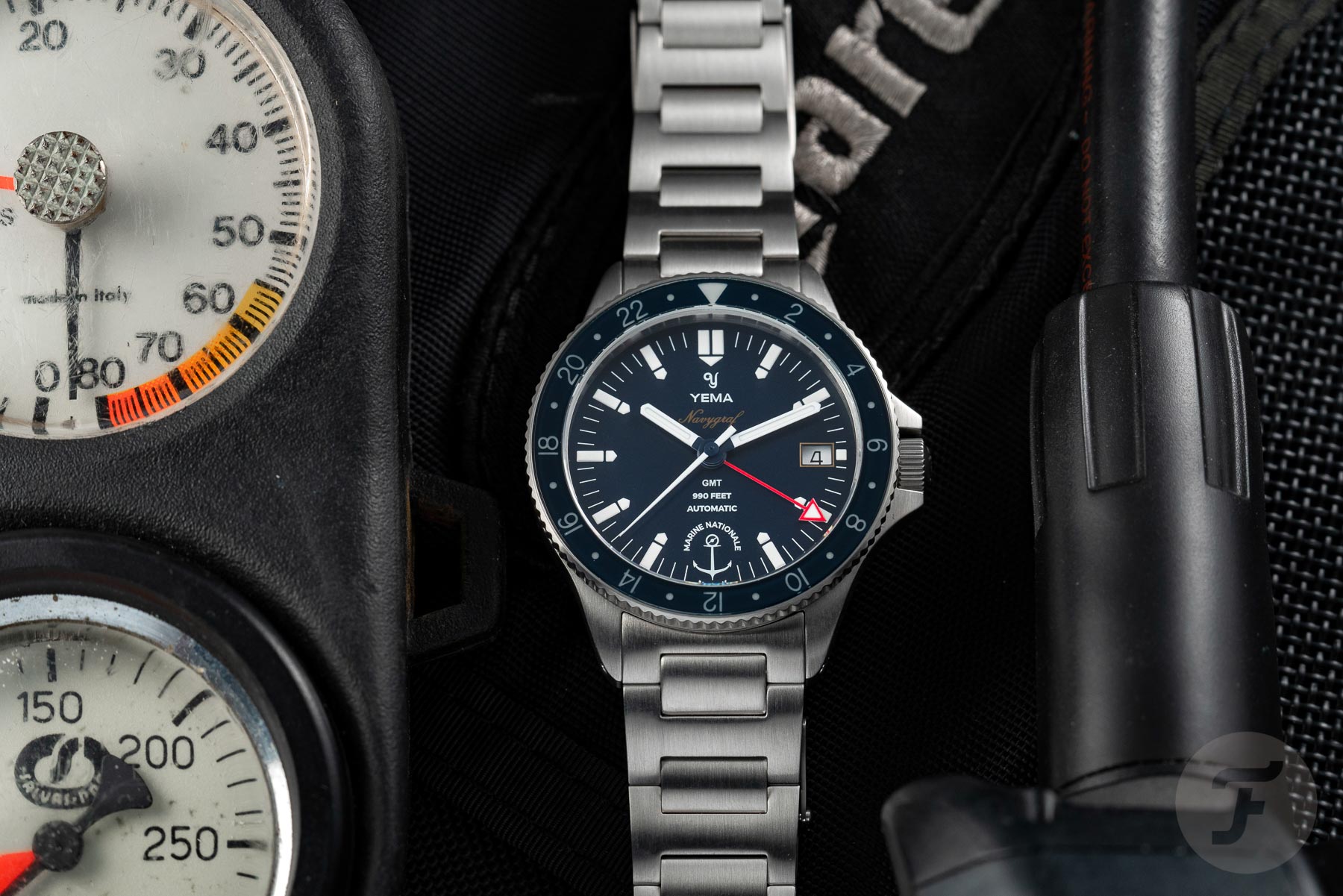 With a history dating back to the early 17th century, it’s a good idea to focus our scope before we set off on this voyage. Let’s narrow our sights to the recent past, so we can view the YEMA Navygraf Marine Nationale GMT Limited Edition watch from the right perspective. That means we’re not going all the way back to the days of Abraham-Louis Breguet who was named by King Louis XVIII as “Horologer de la Marine” in 1815. Instead, our starting point is the 20th century when the Marine Nationale issued its personnel with some interesting watches.

It’s a period in time when watches were delivered “head only” to the French Navy, so without straps. Sailors — varying from crewmen on surface ships to submariners — had to find the strap or bracelet of their liking themselves. But more on that later. Let’s start with a look at the YEMA Navygraf Marine Nationale GMT Limited Edition watch — a diving watch made by a French company to serve in today’s French Navy. 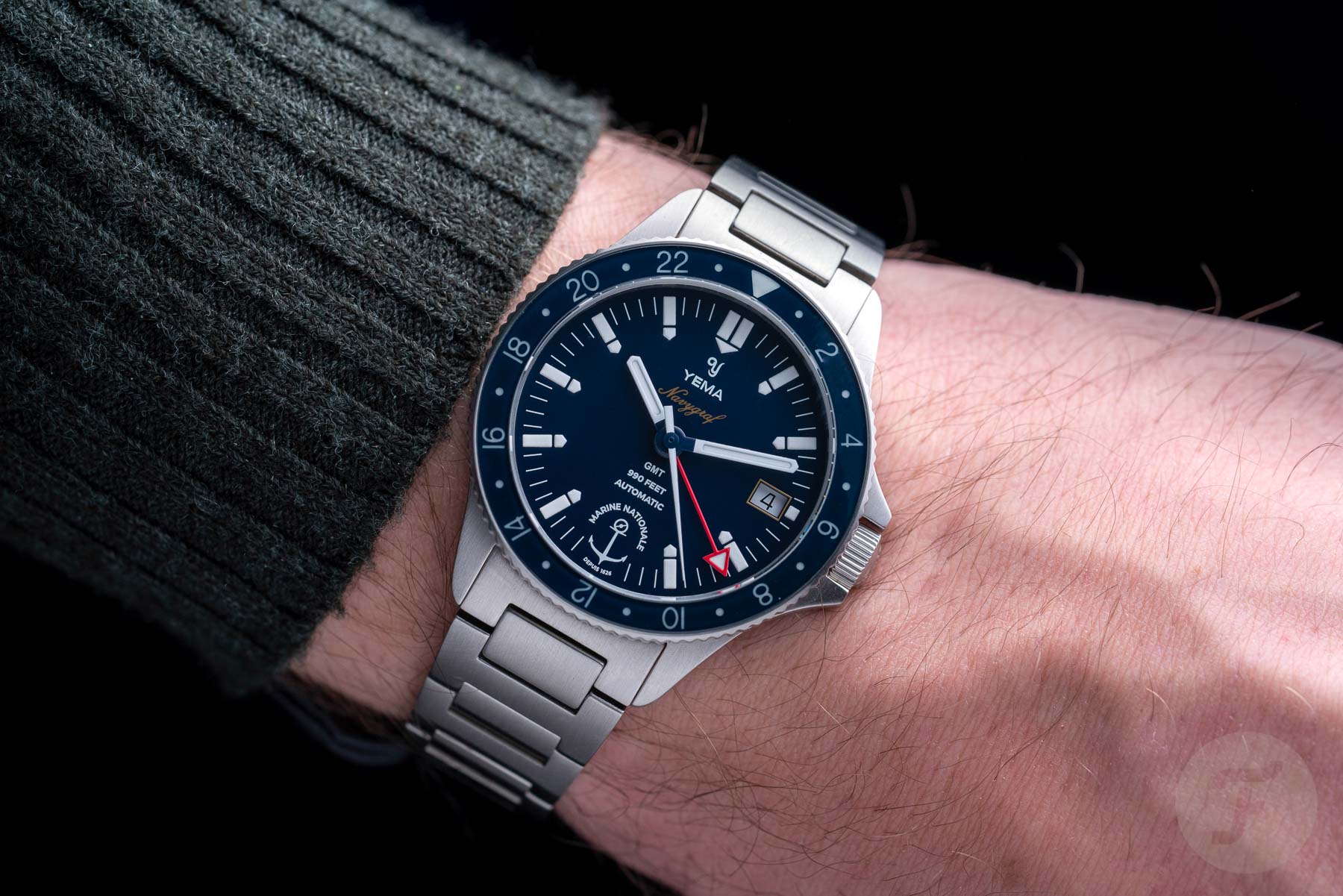 To understand the present we must first look to the past. Arguably the most famous watch produced for the French naval force was the Tudor Submariner Marine Nationale. But it wasn’t the only watch in use. And that’s because the French Navy bought watches in bulk — civilian watches they deemed fit to be issued to sailors. So when you dive into the history books and archives of the French Navy, many watches come to light: vintage Longines watches from the ’50s, Tudors from the ’80s, and, recently, even Casio G-Shocks to name just a few.

You won’t get bored with this color quickly …

The “modus operandi” of the French is quite contrary to the British. The traditional British Rolex Military Submariner is a unique military version of a well-known civilian watch. That big difference paints a colorful past. YEMA made good use of it when designing its new Navygraf Marine Nationale GMT Limited Edition. The matte, dark blue of the dial and 24 hour-bezel suggest YEMA took quite some time to find the exact right shade. It’s not just any kind of random blue. It’s a blue that borders on black. It is a dark hue that gives the watch a serious appearance. The French Navy approved it, which means it’s likely serious stuff. One thing’s for sure: you won’t get bored with this color quickly as is so often the case with brightly colored dials. 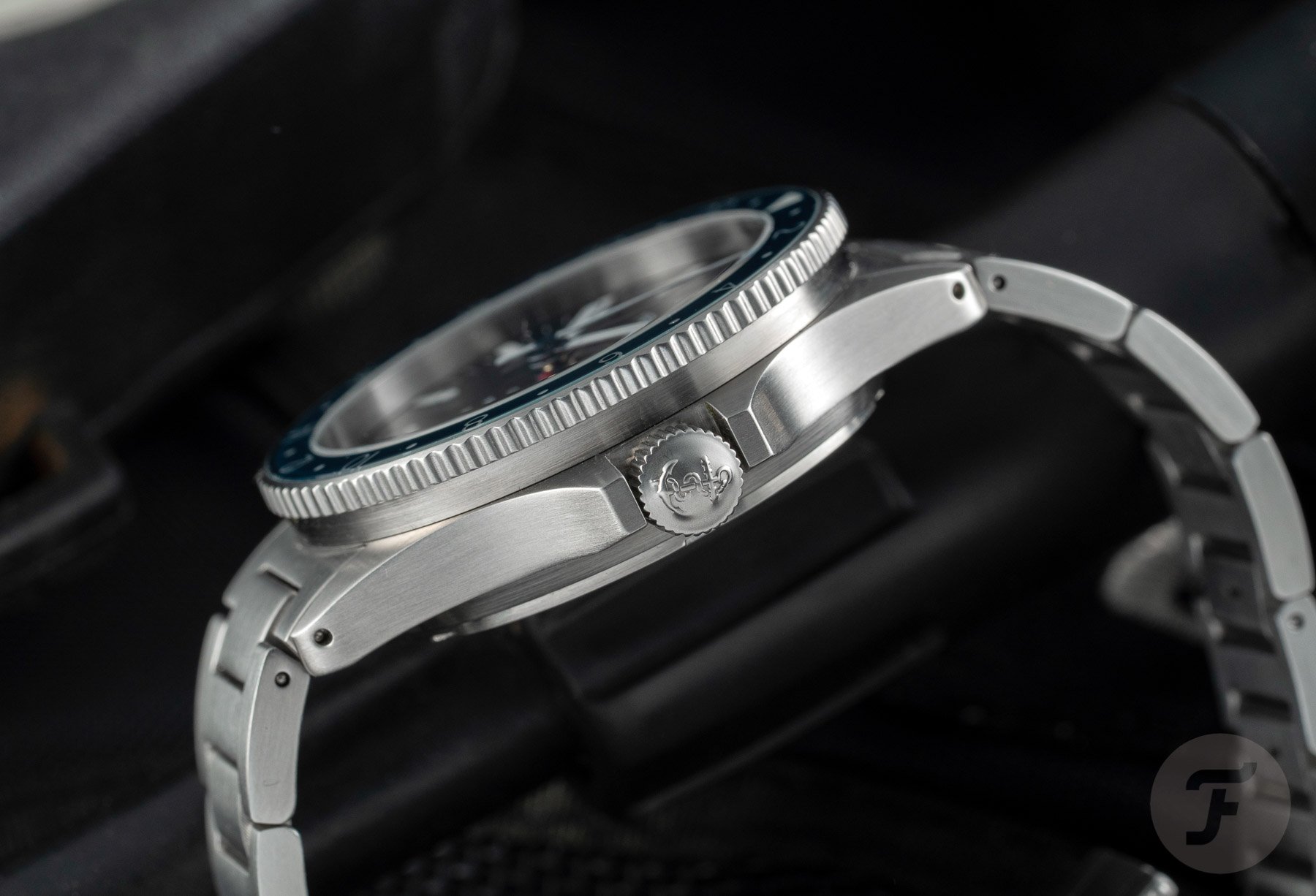 A bezel made from scratch-resistant sapphire

It’s not the first time a Navygraf has popped up on Fratello watches. Tomas wrote about a YEMA from the ’70s he considered to be a “low-key gorgeous divers’ watch.” The new Navygraf Marine National GMT Limited Edition is also low-key because of its moderate 39×12.85mm 316L steel case. The brushed case with integrated crown guards also features a scratch-resistant 2.5mm thick sapphire crystal, and a screw-down crown showing the Marine Nationale anchor. 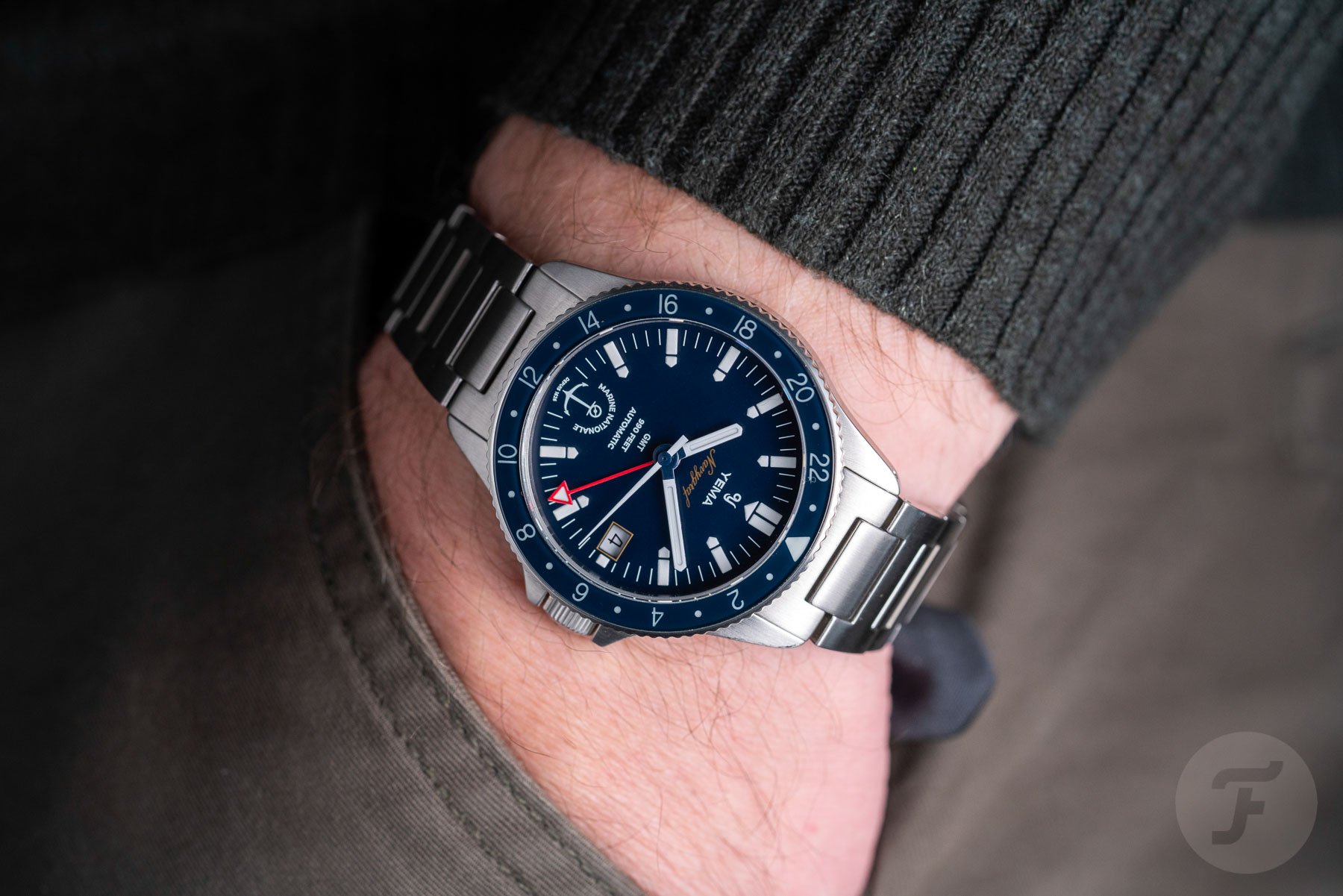 The watch is waterproof to 990 feet (that’s 301.752 meters to be exact). Interestingly, the bidirectional 24 hour-bezel is made from slightly glossy sapphire and not ceramic as you might expect when looking at it. Blancpain uses sapphire in the bezels of its Fifty-Fathoms diving watches, so it’s nothing new, but in the more modest price-category YEMA operates, using this material gives the watch a more exclusive feel.

An in-house caliber from the French Jura mountains

Inside the water-resistant steel case beats the in-house automatic caliber YEMA3000. This movement debuted in 2011. The movement was designed, developed, and assembled by YEMA watchmakers in Morteau, a town that could be considered as the heart of French watchmaking. The town lies in the French part of the Jura mountains very close to the Swiss border and just a few miles away from La Chaux-de-Fonds. The craft of building movements is second nature to people in this area; true watchmaking know-how runs in their blood. The YEMA3000 is a second-generation in-house caliber that combines manufacturing simplicity and efficiency that leads to a precise and reliable movement at a very good price-quality ratio.

YEMA3000 is a 29-jewel GMT in-house movement that beats at 4hz. It shows the hours, minutes, and seconds. On top of that, there’s a second 24-hour hand and a quick-set date. The power reserve is 42 hours. You won’t see any of the movement, though: the movement hides behind a screwed case back decorated with the logo of the Marine Nationale. The words “depuis 1626” on the case back are a reminder of the birth year of the French navy. 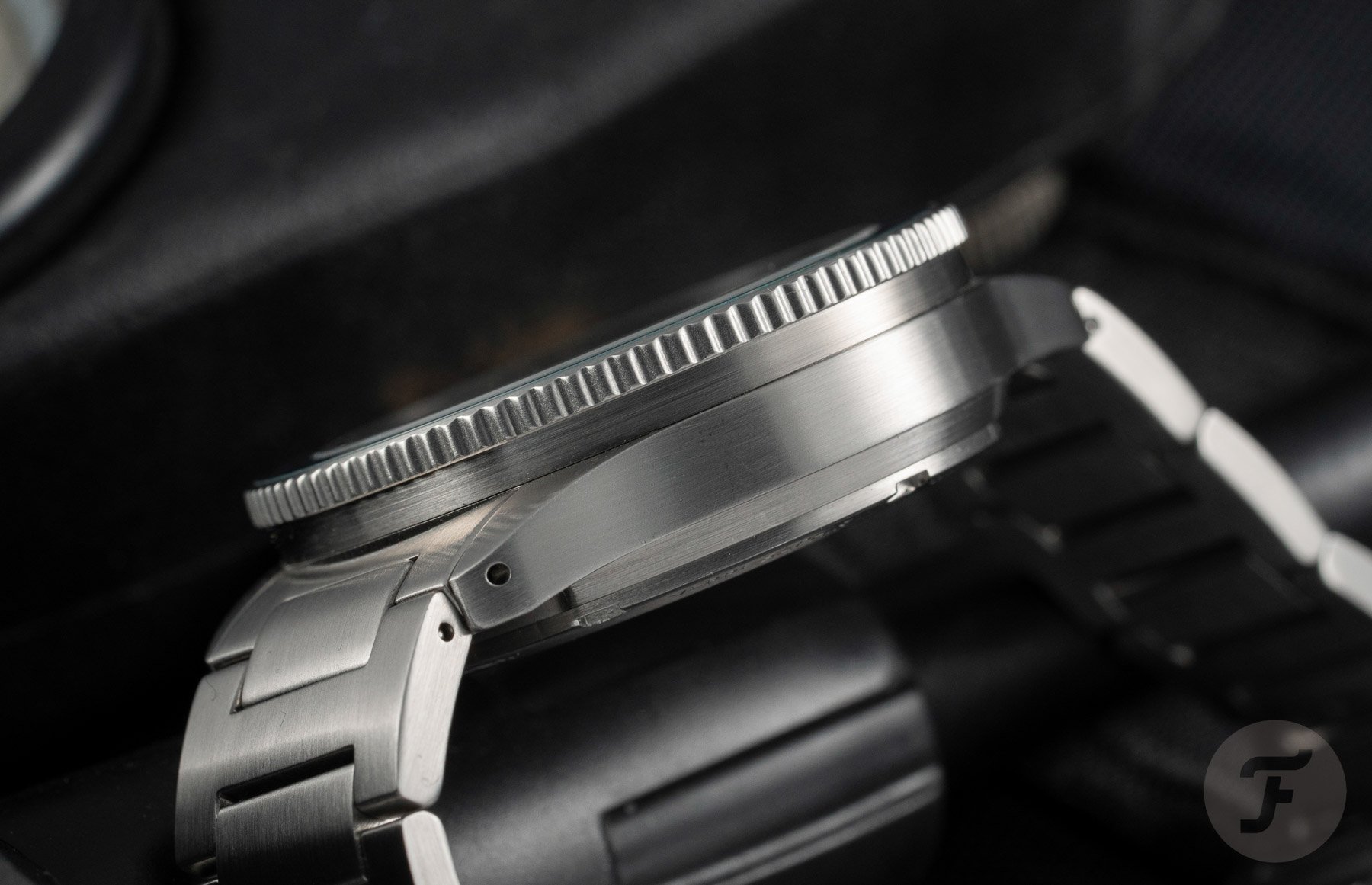 Looking at that case back with the Marine Nationale logo, I thought of recent watches that came out carrying that same name or a similar source of inspiration. There’s the Longines Heritage Military Marine Nationale from last year, of course. Longines designed the original reference 5774 after World War II and supplied it to the French Navy. It was a petite 33mm watch with an in-house 12.68N manual wind movement. The other watch with a link to the Marine Nationale is the Black Bay Fifty-Eight Navy Blue. This 2020-watch is based on the Tudor Submariner ref. 94010 Marine Nationale. That model is a blue “Snowflake” collectors adore (and with good reason).

YEMA did supply its Superman diving watches to the — wait for it — French Airforce.

Since YEMA is French, French frogmen using YEMA diving watches wouldn’t be too much of a surprise. Surprisingly the navy archives don’t mention a YEMA Navygraf. However, YEMA did supply its Superman diving watches to the — wait for it — French Airforce. Since the ’70s YEMA has supplied watches to different branches of the air force and fighter pilots and Helicopter Rescue Divers use them also. In 2020, YEMA again became the official partner of the French Air Force. Although not the only one since Tudor was also selected by the French Navy to become an official partner. 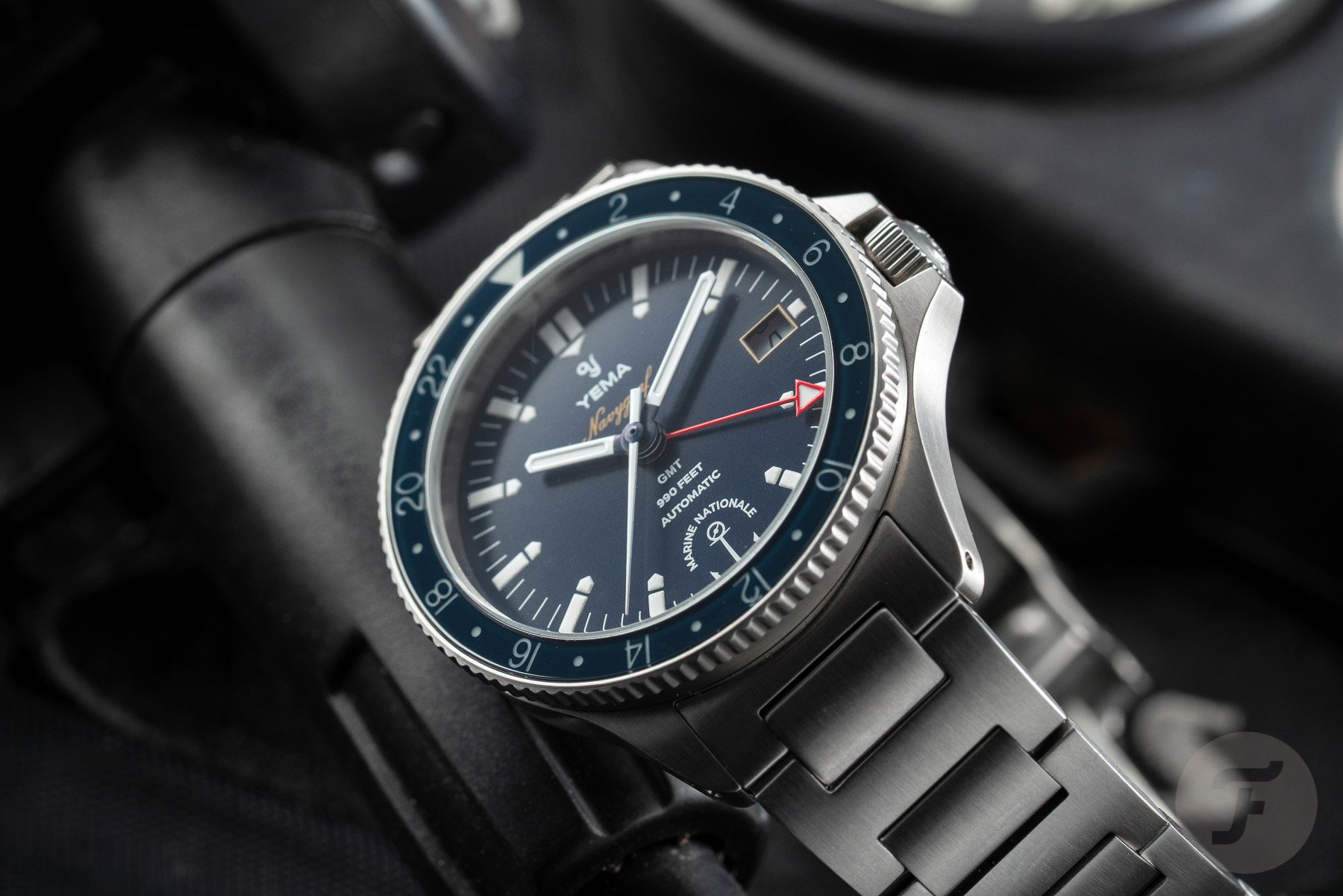 Maybe the Air Force put in a good word for YEMA, because, as of this year, the brand is also an official partner to the French Navy. The Navygraf Marine Nationale GMT Limited Edition meets the specific requirements of the French maritime forces. And it proudly displays the French Navy logo at 6 o’clock. That logo is a pretty dominant graphic element since it also functions as the hour marker at 6 o’clock. In fact, it’s a bit too dominant for my personal taste, but it certainly hammers home its message. Four versions of the Navygraf Marine Nationale are available to both army staff and the public. Apart from the GMT, there’s the choice between quartz and automatic three-handers, and there’s also a 34mm version to adapt to the smallest of sailors.

… YEMA also put in a parachute strap in the special limited edition box.

The YEMA Navygraf Marine Nationale GMT Limited Edition watch is a functional instrument. A generous amount of Super-LumiNova on the hands, indexes, and bezel markings make it very easy to read in dark conditions. The brushed 316L steel case and bracelet give it a proper tool watch appearance. It comes with a secure lock and a divers’ extension on the clasp. 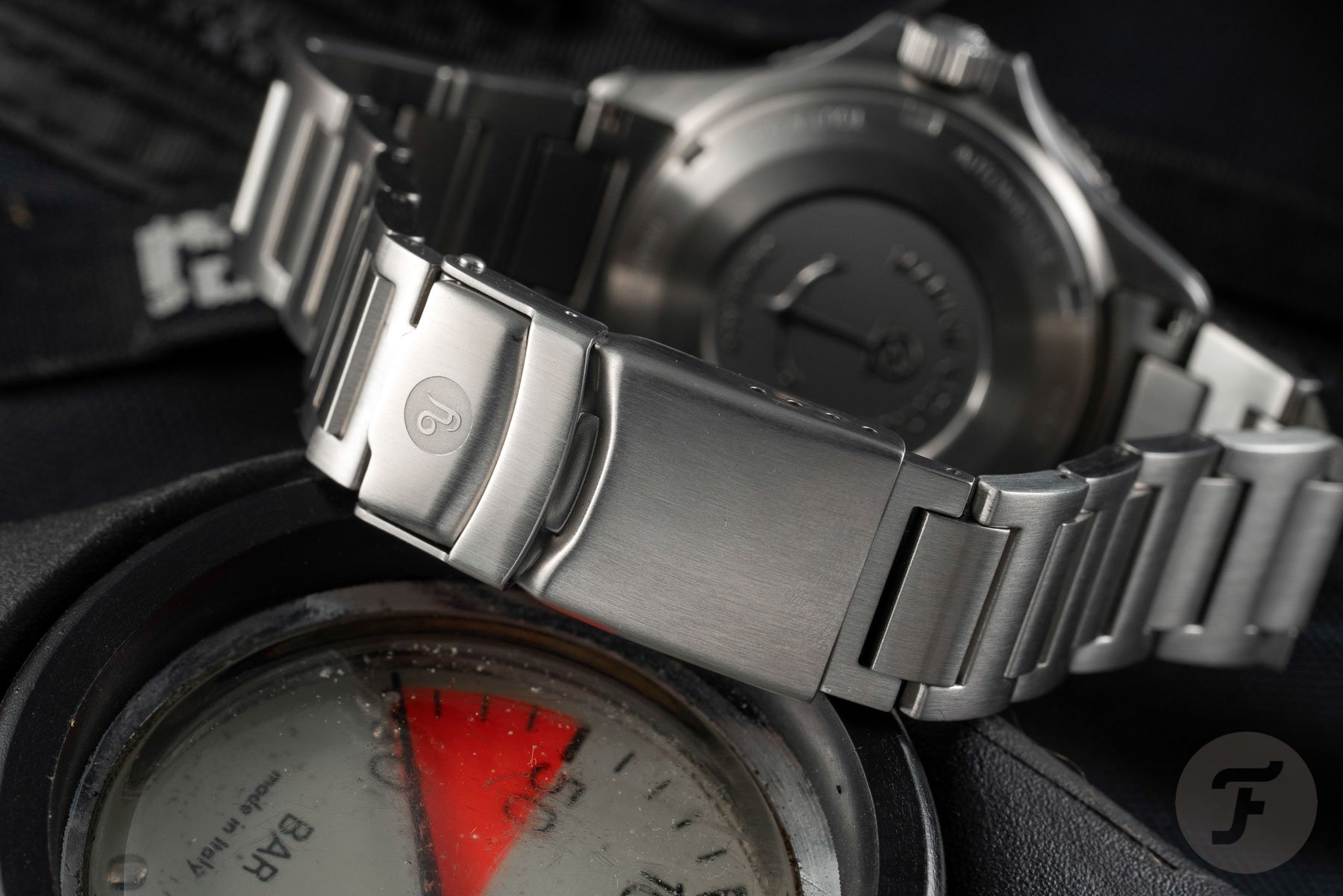 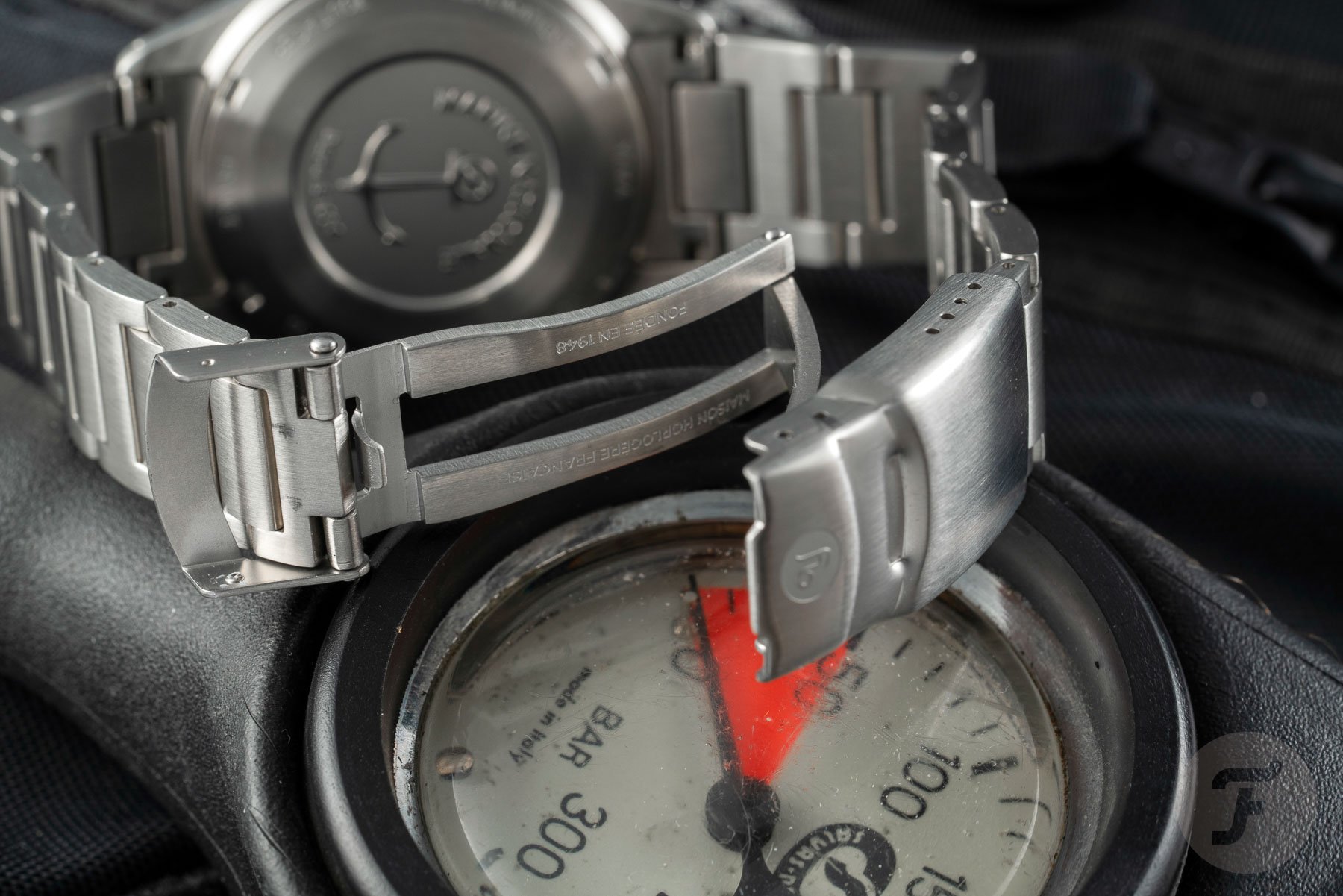 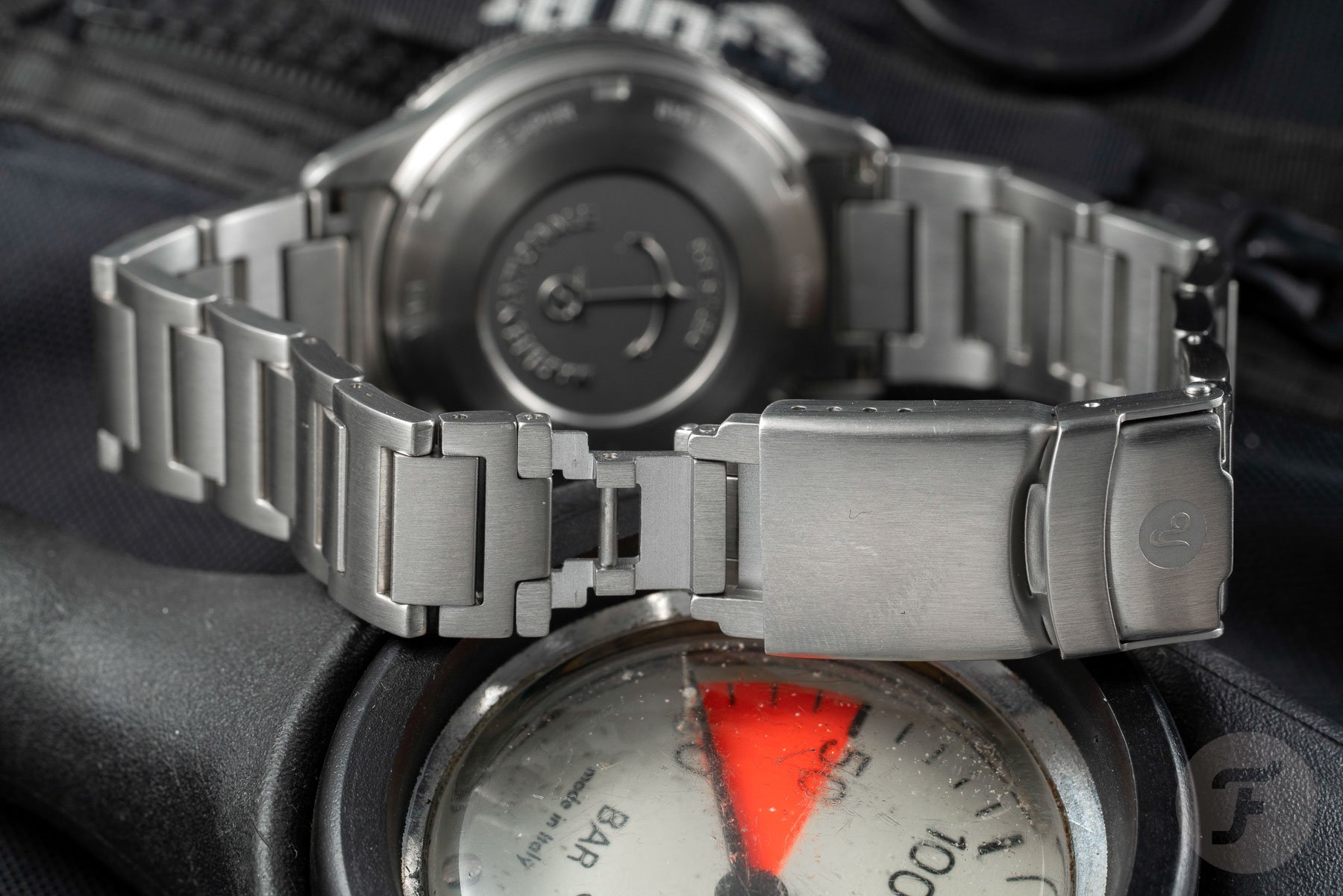 Pleasingly, YEMA also included a parachute strap in the special limited edition box. That’s a nice (somewhat unexpected) nod to the history of Marine Nationale timepieces that were issued with neither a bracelet nor strap. The Marine Nationale divers of yesteryear used elastic webbing cut from parachutes to make a single pass watch strap. History repeats itself thanks to YEMA and that’s not a bad thing at all in this case. 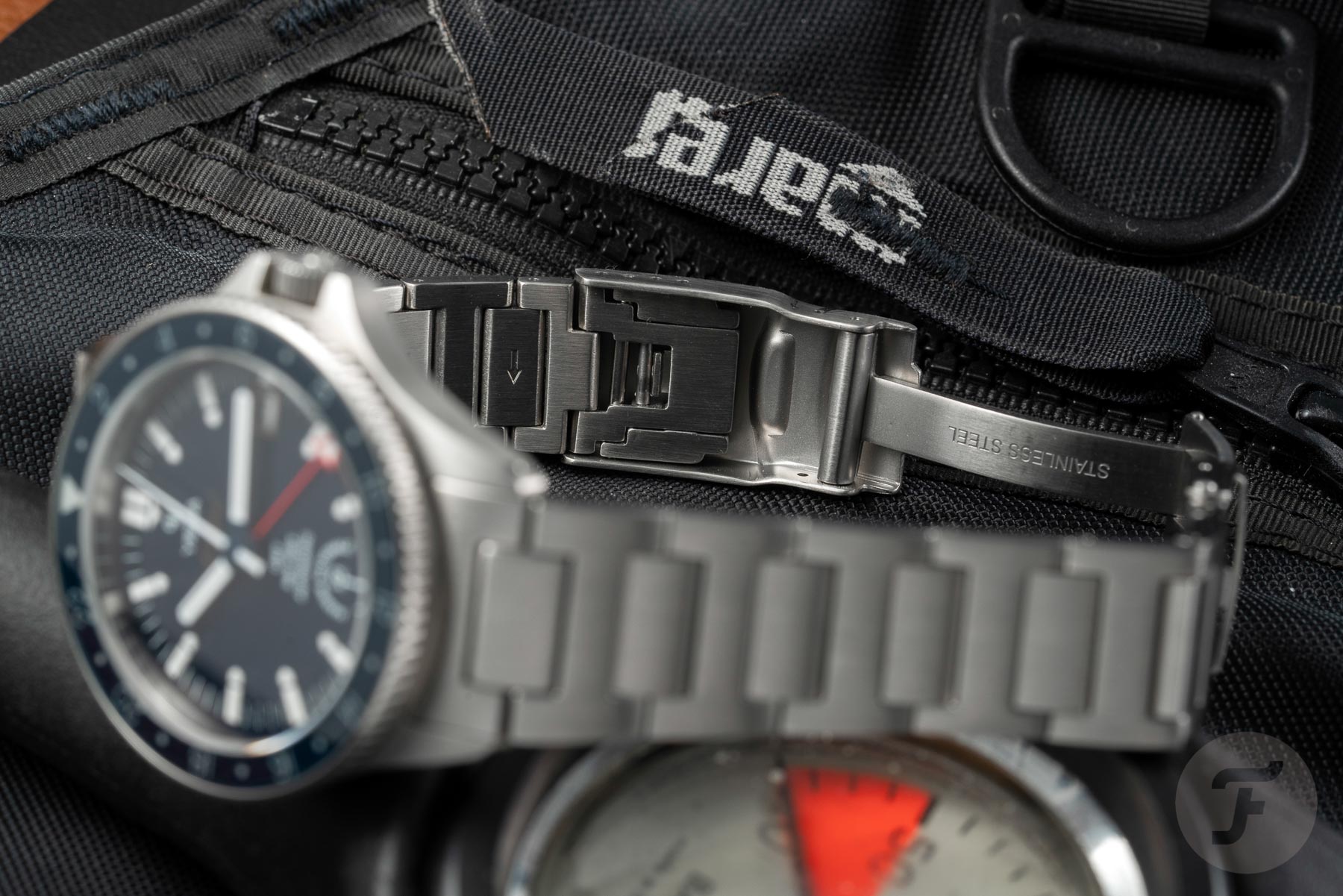 The big question is: do you want to wear something that has been or something that is? The Longines and the Tudor are modern watches for civilians based on military watches of the past. The Navygraf Marine Nationale GMT Limited Edition is a modern military-spec watch that civilians can also buy. It’s all about the story you prefer. And if that isn’t enough, let me give you the prices of the different marine National stories: the Longines costs €1,940, the Tudor on a bracelet €3.470, and the Navygraf Marine Nationale GMT Limited Edition €1,049. Make up your mind, sailor! 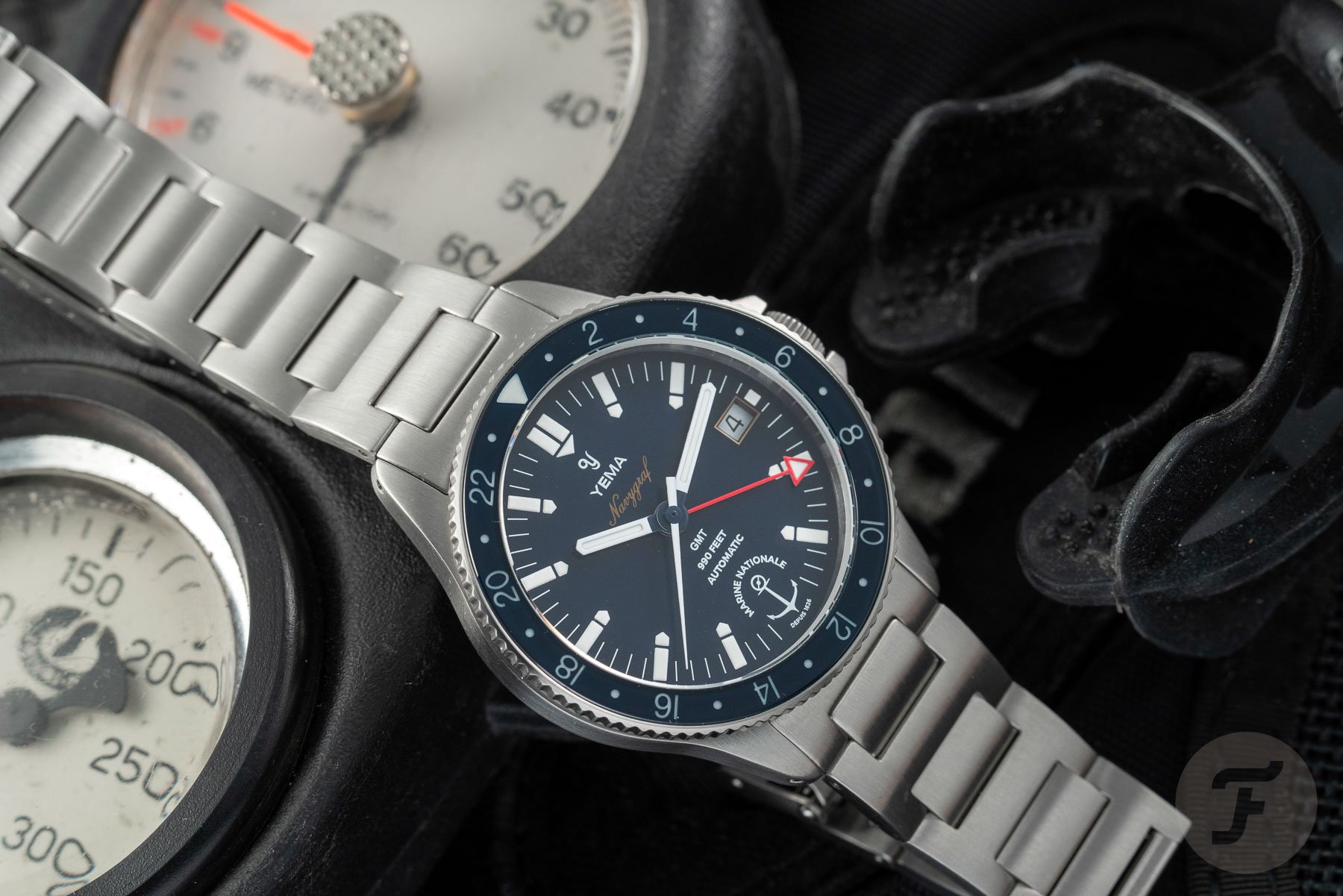 The timepieces will be available for pre-order from May 6, 2021, on the YEMA website. Also, when you buy any Navygraf Marine Nationale, YEMA makes a donation to the NGOs supported by the French Navy. The GMT Limited Edition is priced at €1,049.

Hot Topics
Introducing: The New Seamaster Professional 300M 60 Years Of Bond — With A Special Animated Case Back
100 comments
It’s Time To Invest In A Dress Watch — Our Picks From Breguet, Omega, Grand Seiko, And More
67 comments
Are You Still After An Omega × Swatch MoonSwatch?
65 comments
Sunday Morning Showdown: The Tudor Pelagos Provocation — Pelagos Vs. Pelagos 39
55 comments
The Rolex Waitlist Conundrum — How Much Will The Price Of Your Watch Increase While You Wait?
48 comments
Popular
A Question From A Reader: “Which Modern Speedmaster Is Closest To The Original Moonwatch?”
Robert-Jan Broer
14
The Ultimate Sports Rolex – The Explorer II Reference 1655
Robert-Jan Broer
17
#TBT Seiko H558 Arnie – One Serious Diver
Michael Stockton
25