The Heritage Military Marine Nationale is the latest retro release from Longines. We take a closer look.

Longines has been on a roll for the last year or so with continuous additions to its Heritage collection. The brand has added pieces with complications as well as simple three-handers. My favorite releases, though, have used the now-familiar 38.5mm diameter stainless steel case. Today’s Military Marine Nationale is the newest introduction and it just might be my favorite. Before we break it down, let’s quickly review the other available 38.5mm pieces. 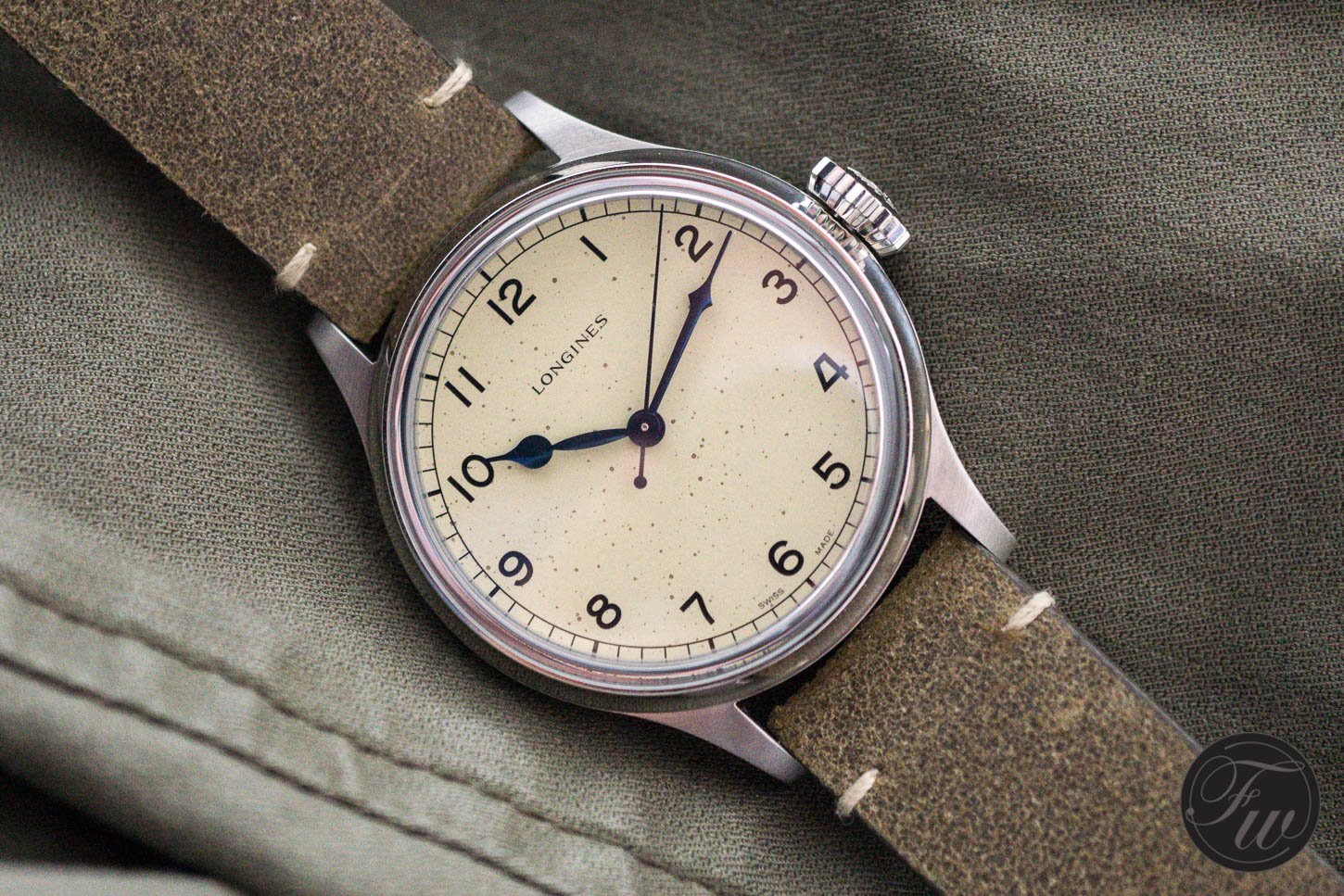 Longines kicked things off in early 2019 with the Heritage Military. That piece celebrates the 100th Anniversary of the RAF and is notable for its aged dial. These are available for €1,794. 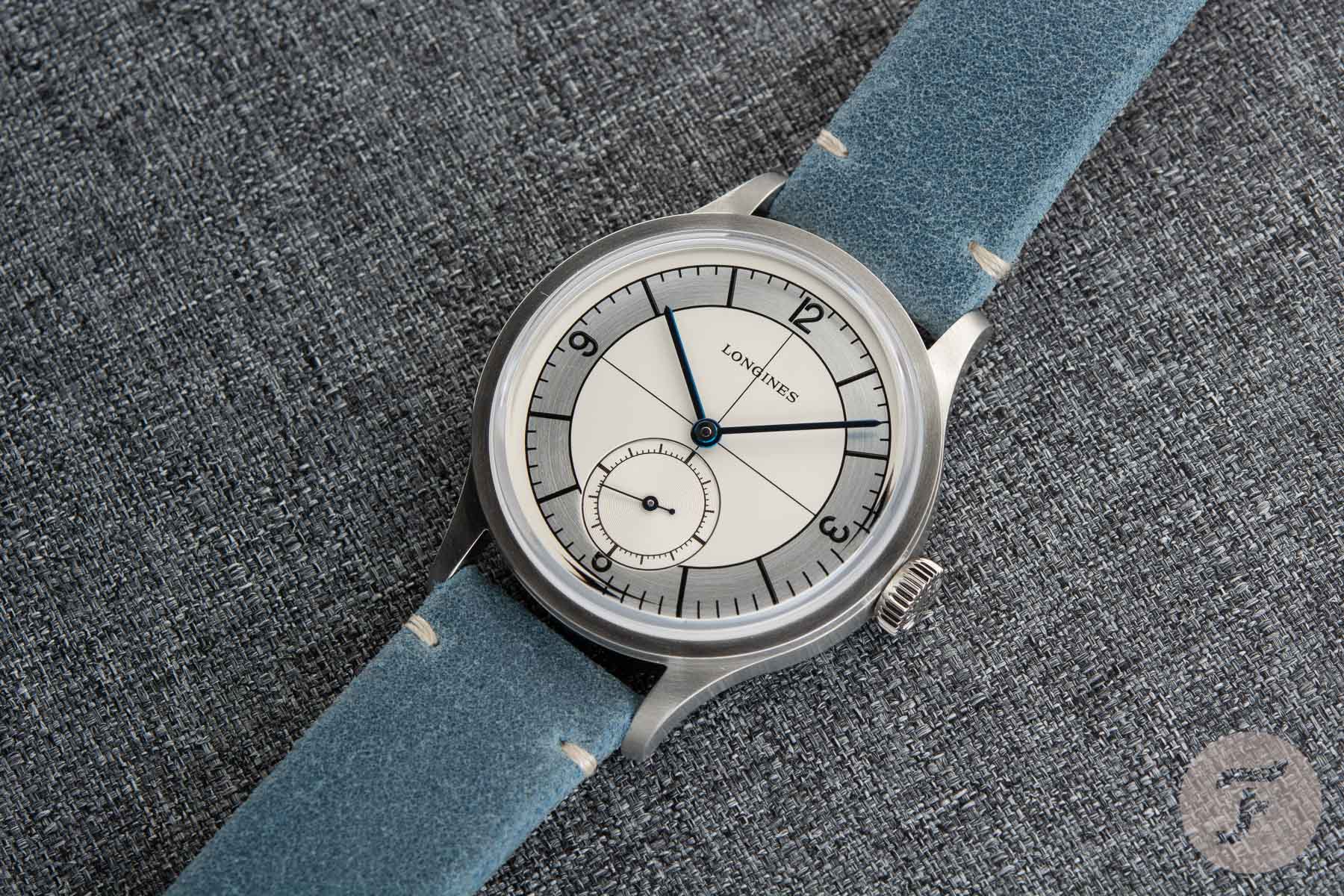 A series of strong releases in 38.5mm

In late 2019, Longines struck again with the Heritage Classic. This piece brought a sector dial, sub-seconds hands, and a stepped bezel. A couple of different strap variations are available for €2,040. 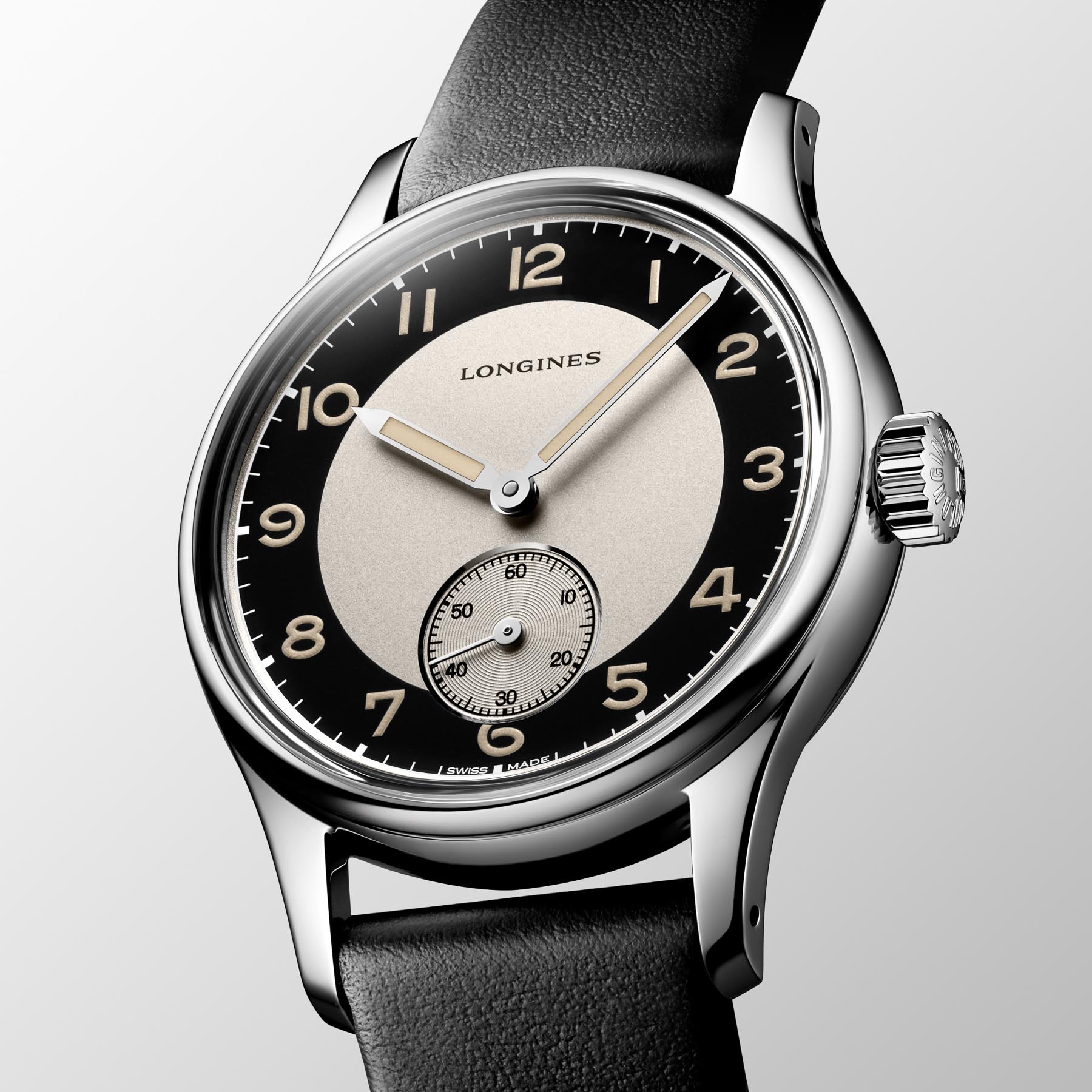 In June of this year, Longines gave us the Heritage Classic — Tuxedo with a fantastic two-tone dial reminiscent of several 1940s watches. These pieces are available on-demand for €1,940. Now, we have the new Heritage Military Marine Nationale and I think it shows just how versatile this case is. 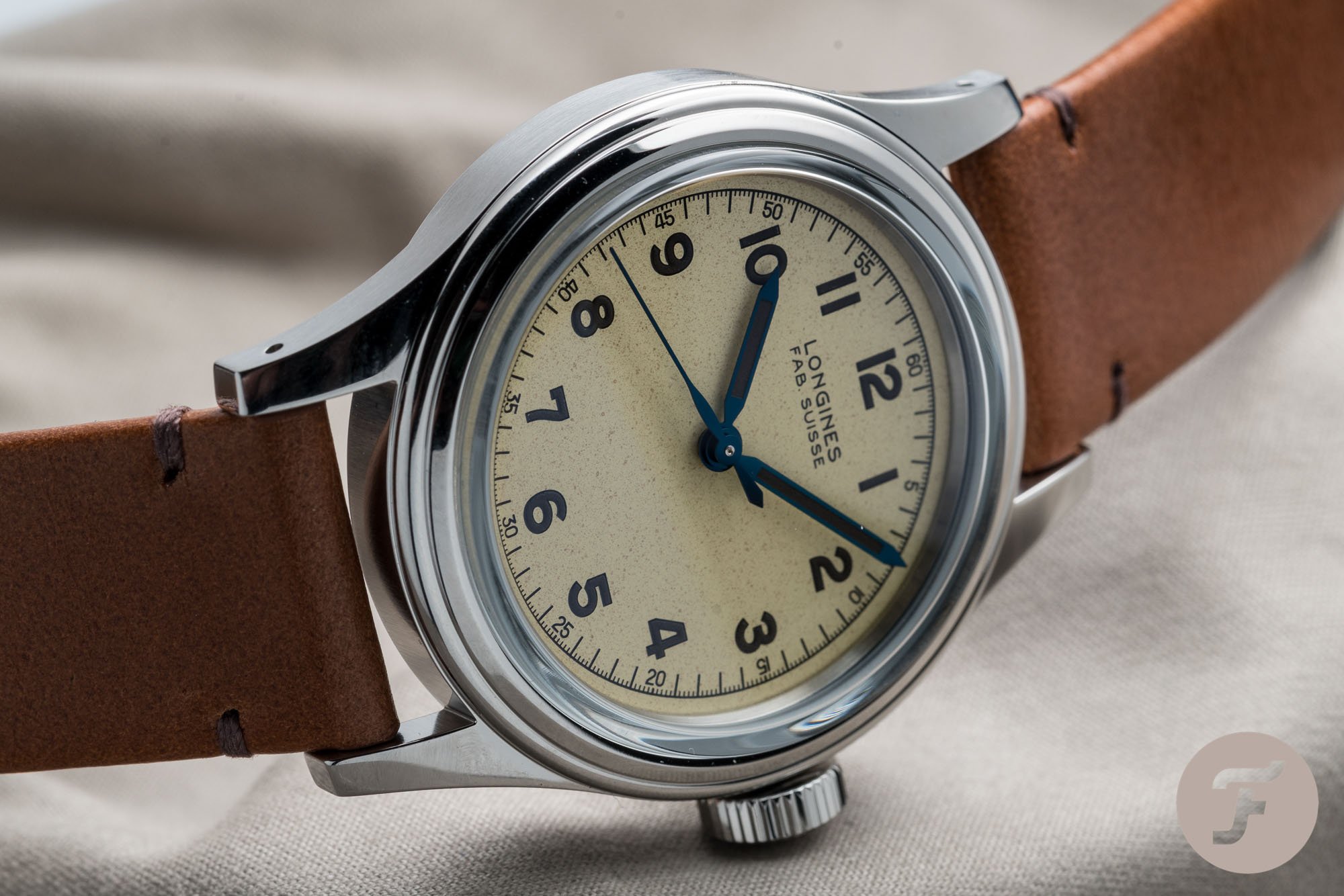 The Longines Heritage Military Marine Nationale may use the familiar 38.5mm by 47mm case design seen on other Heritage pieces but looks completely different. Stepping back, the original watches were designed for the French military after World War II and issued to the “Marine Nationale”. The original reference 5774 came in at a petite 33mm and used an in-house 12.68N manual wind movement. In order to aid water resistance, these watches gained a screw-down crown with their hallmark “sei tacche” (six-notch) case backs. I’m happy to say that the new piece follows the formula quite well. 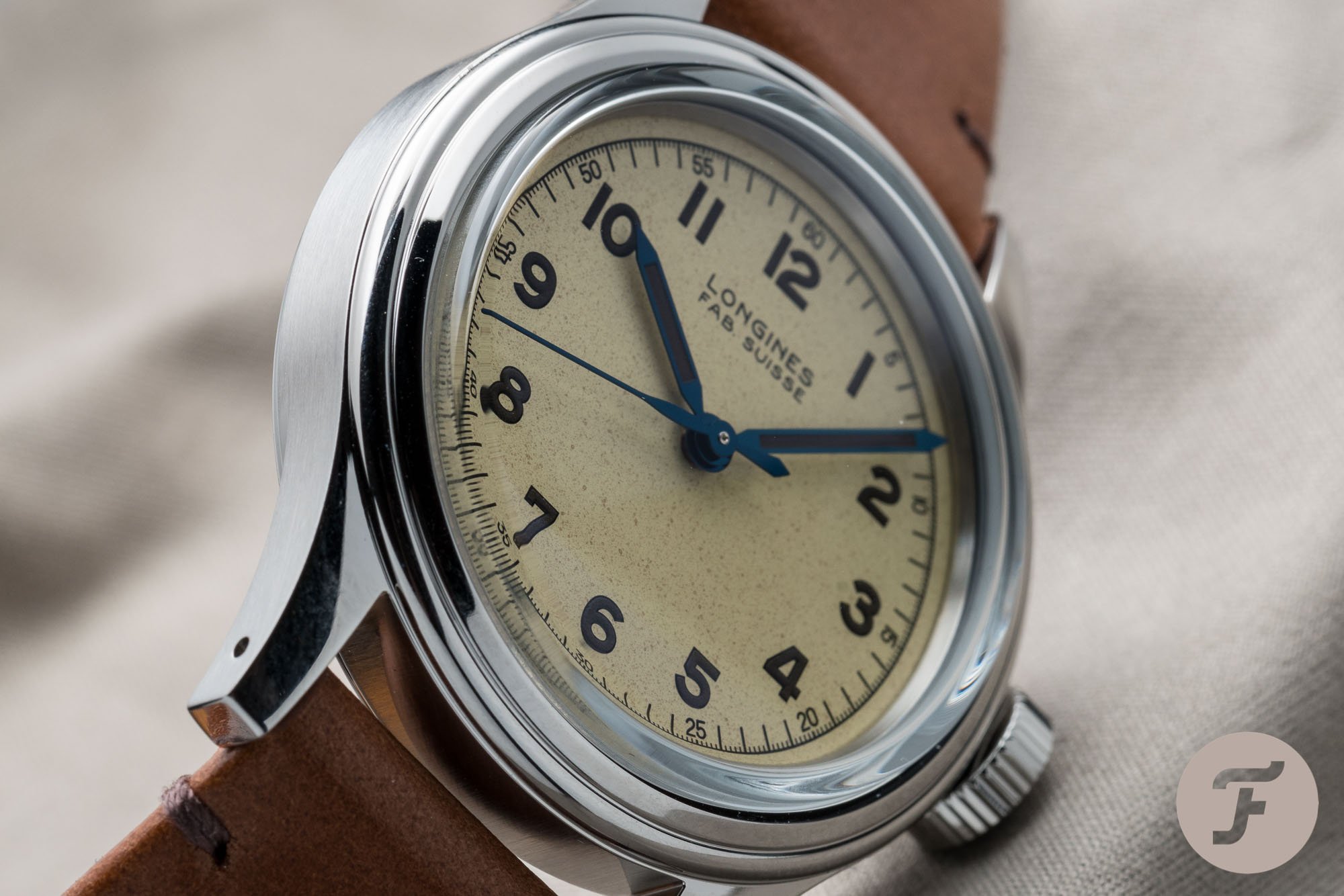 The basic case on the Military Marine Nationale may seem familiar but there are differences. Sometimes they’re even subtle. Firstly, the lugs are more abrupt at their ends. Second, it’s polished on the top and brushed on the sides. The bezel also differs from other recent releases with its double stepped and polished shape. The crown is oversized and appears to be bespoke for this watch. 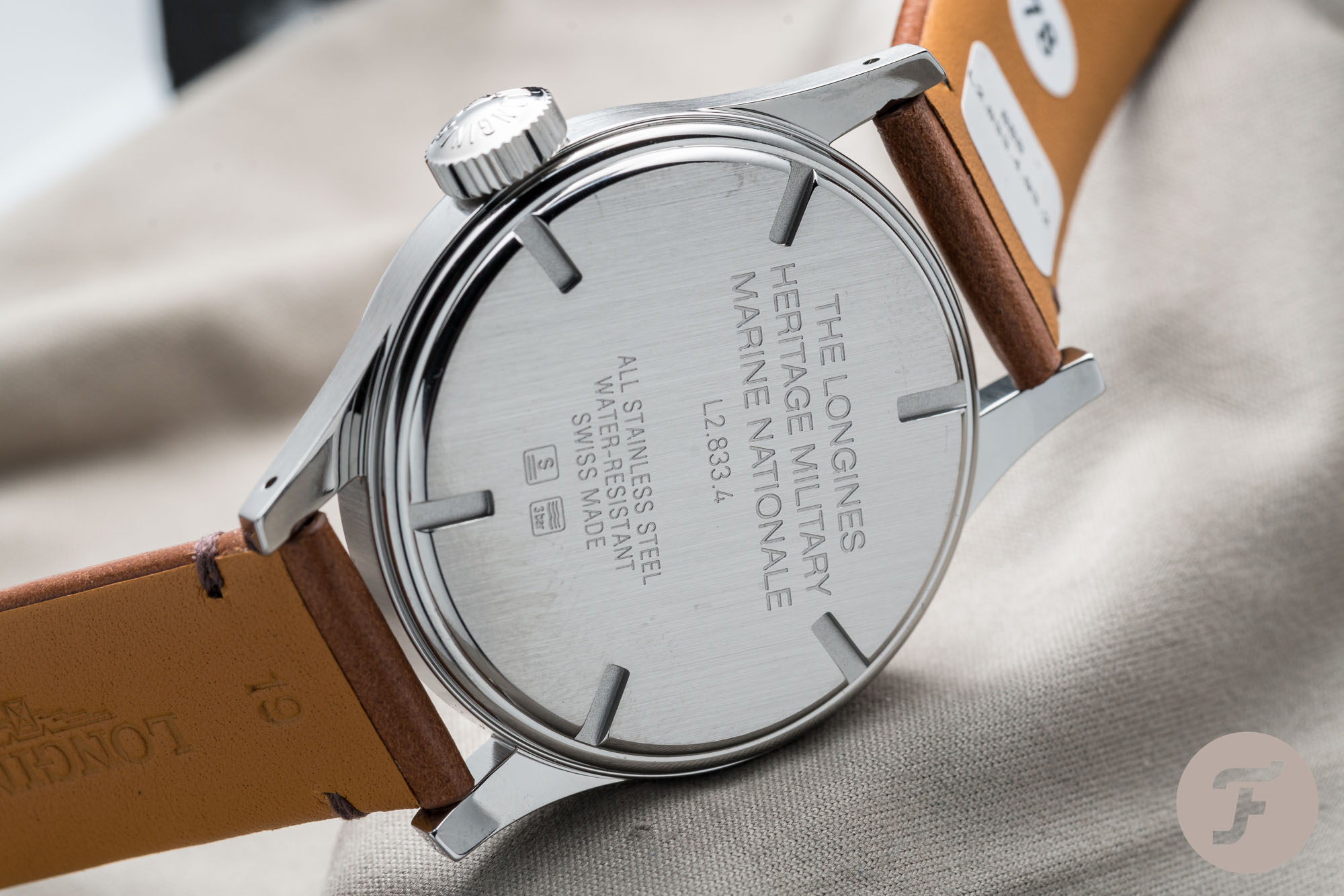 As mentioned, the Military Marine Nationale brings in a screw-in case back with six notches known as the “sei tacche”. Collectors go nuts for the real vintage pieces and it’s nice to see it return in a modern format. Yes, the case back contains a little too much writing for my liking, but that will be hidden most of the time. Interestingly, the other Heritage 38.5mm Longines make do with a snap-on case back yet still have the same level of water resistance. 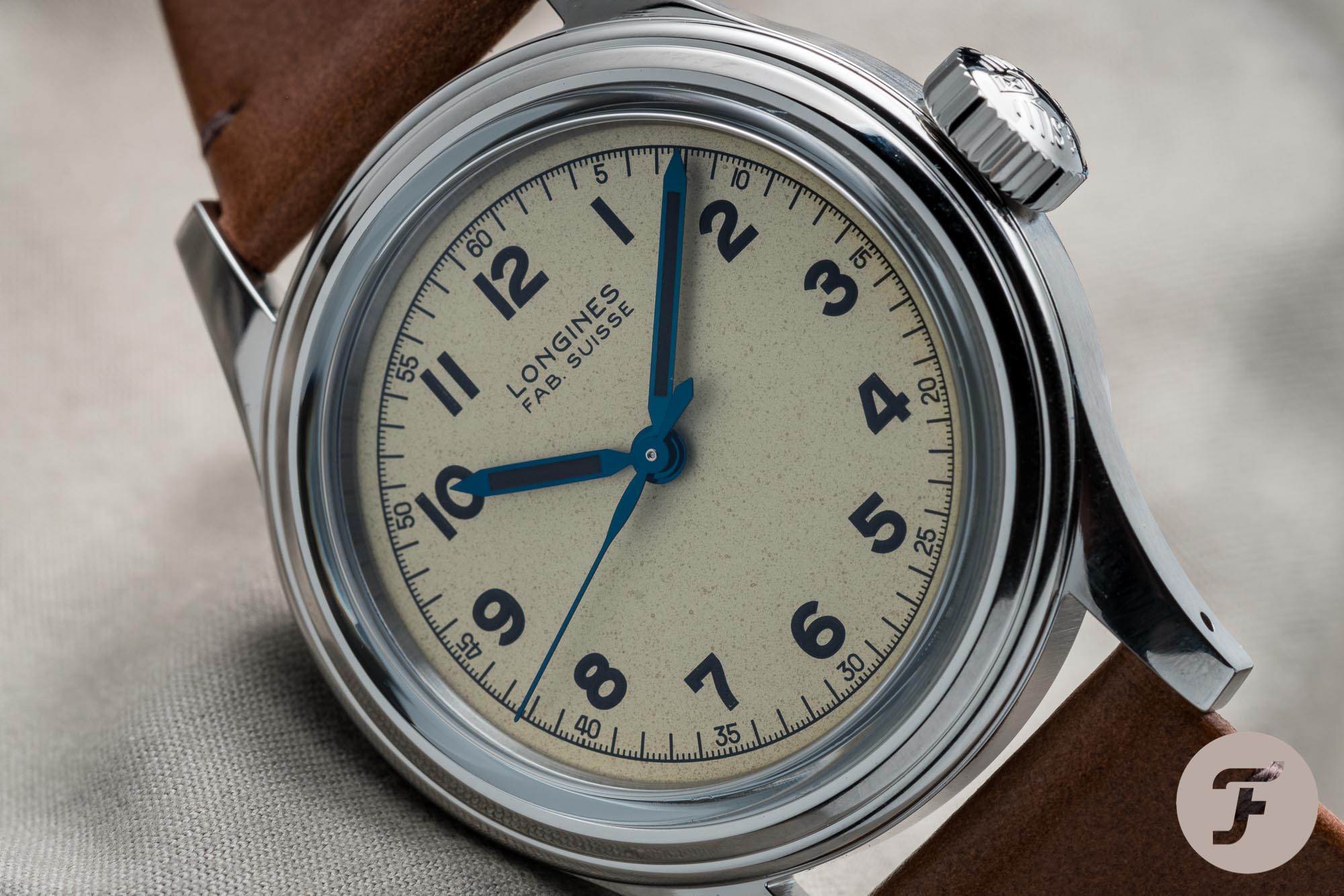 What really makes the Military Marine Nationale stand out from other models is its smaller dial. The original model afforded more water resistance than normal watches and perhaps drove the use of a smaller, thicker crystal. Longines duplicated that look here and I think it looks great. And like the Heritage Military, this one also has an aged looking dial with darkened Super-LumiNova. Massive kudos to Longines for avoiding the typical pitfalls of adding a date window and/or the dreaded “automatic” font to the dial. Instead, we’re left with the historically accurate “Longines Fab. Suisse”. 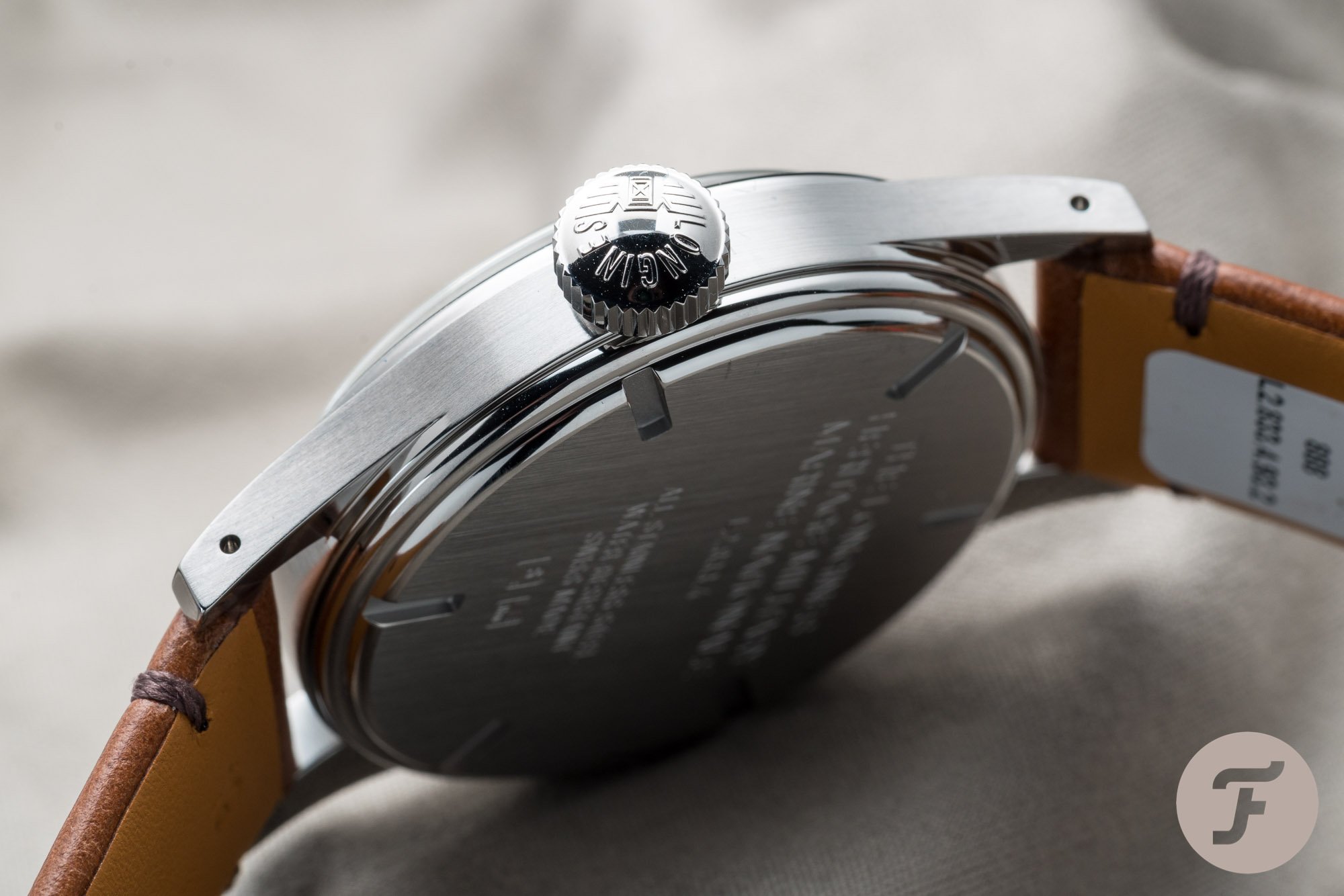 My only quibble is a small one

If I have one complaint about the Military Marine Nationale it’s the employment of an automatic movement. It’s not a big deal because Longines kept the wording off of the dial, but I’d sure like to see a hand-wound movement in one of these highly wearable Heritage pieces. Longines chose its L888 automatic (ETA A31.L01) that beats along at (the always odd) 25,200vph and has 64 hours of power reserve. Again, it’s fine and most buyers probably won’t care. 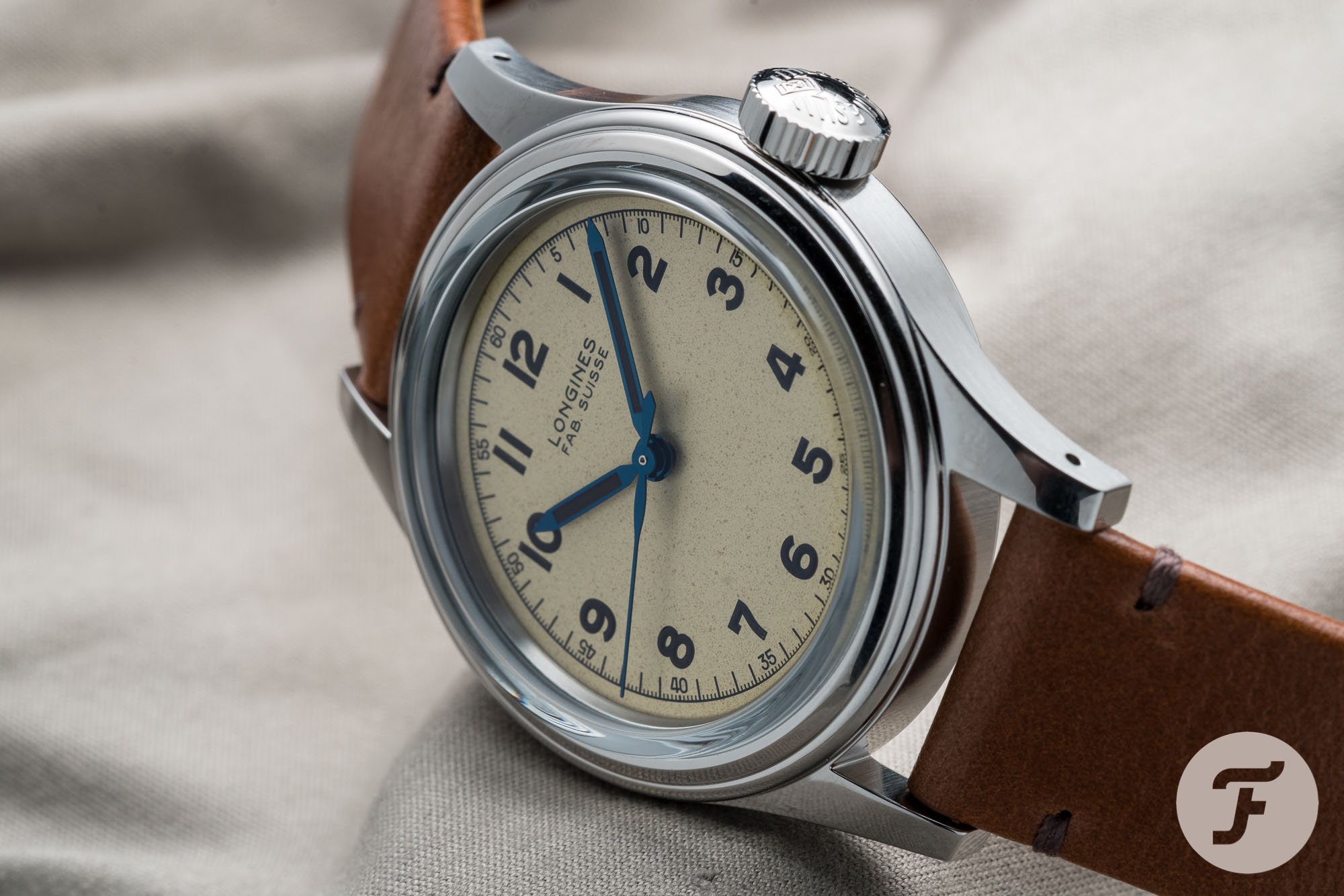 We don’t have a wrist shot of the Military Marine Nationale, but I can tell you that they wear well. With a lug-to-lug of 47mm, Longines takes a smallish case and creates a form factor that works for those with larger wrists. The watch still maintains its semi-diminutive vintage vibe, but it’s less of a toy due to the modern footprint. Longines has been on point with its strap selections and this one qualifies as well. An attractive 19mm wide medium brown leather strap with pin buckle fits the look well.

As I stated in the beginning, I really like the recent Heritage pieces from Longines and the Military Marine Nationale is no exception. Four or five years back, the brand made decent pieces, but almost always flubbed the final execution with a wordy dial, awkward sizing, or a chunky case. These new pieces may not be for everyone — especially those who are tired of the retro trend — but I think they’ll look great on just about anyone. And at €1940 (including VAT), it’s hard to argue with the value proposition.

Further detail on the Longines Heritage Military Marine Nationale may be found on the official Longines site. 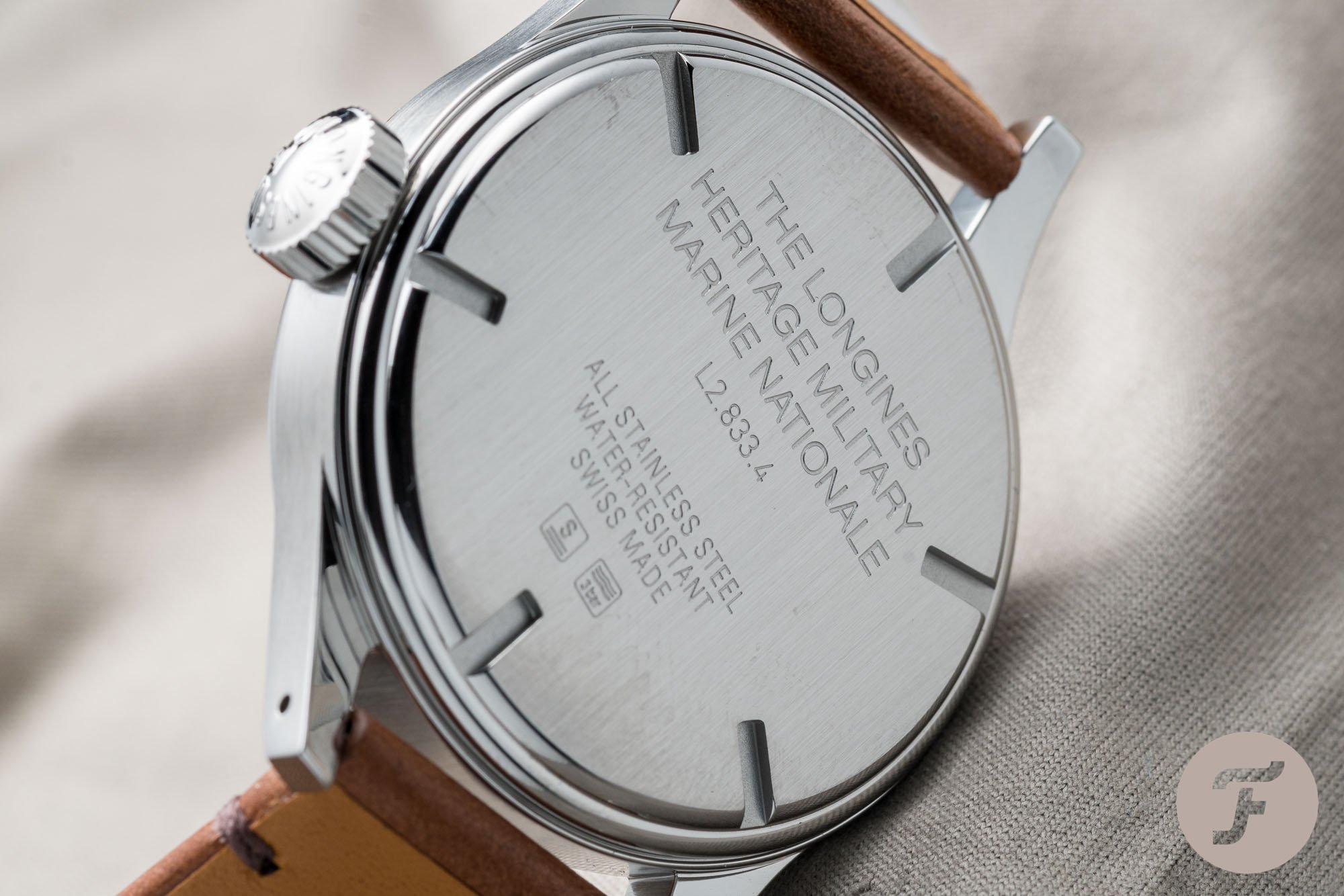 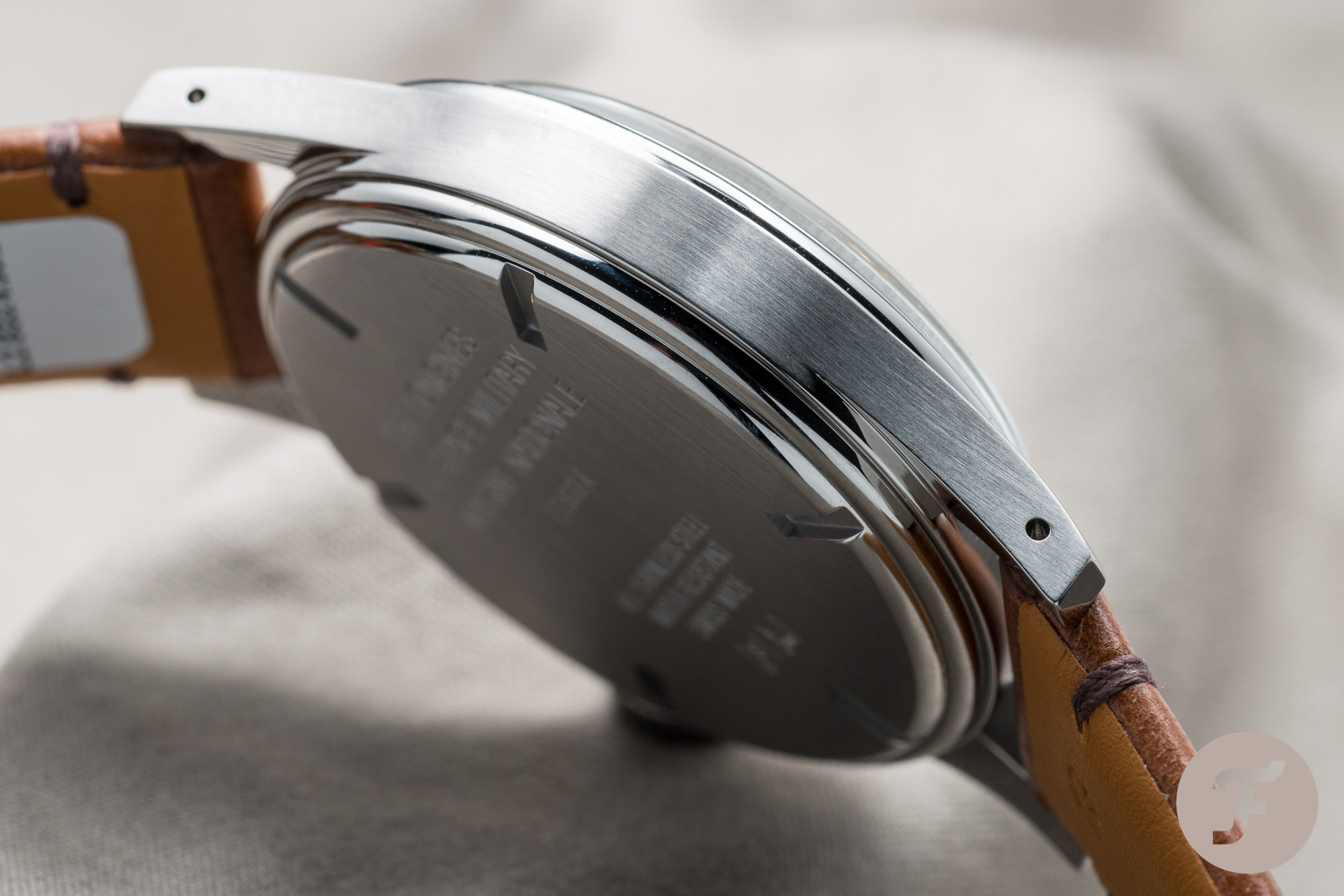 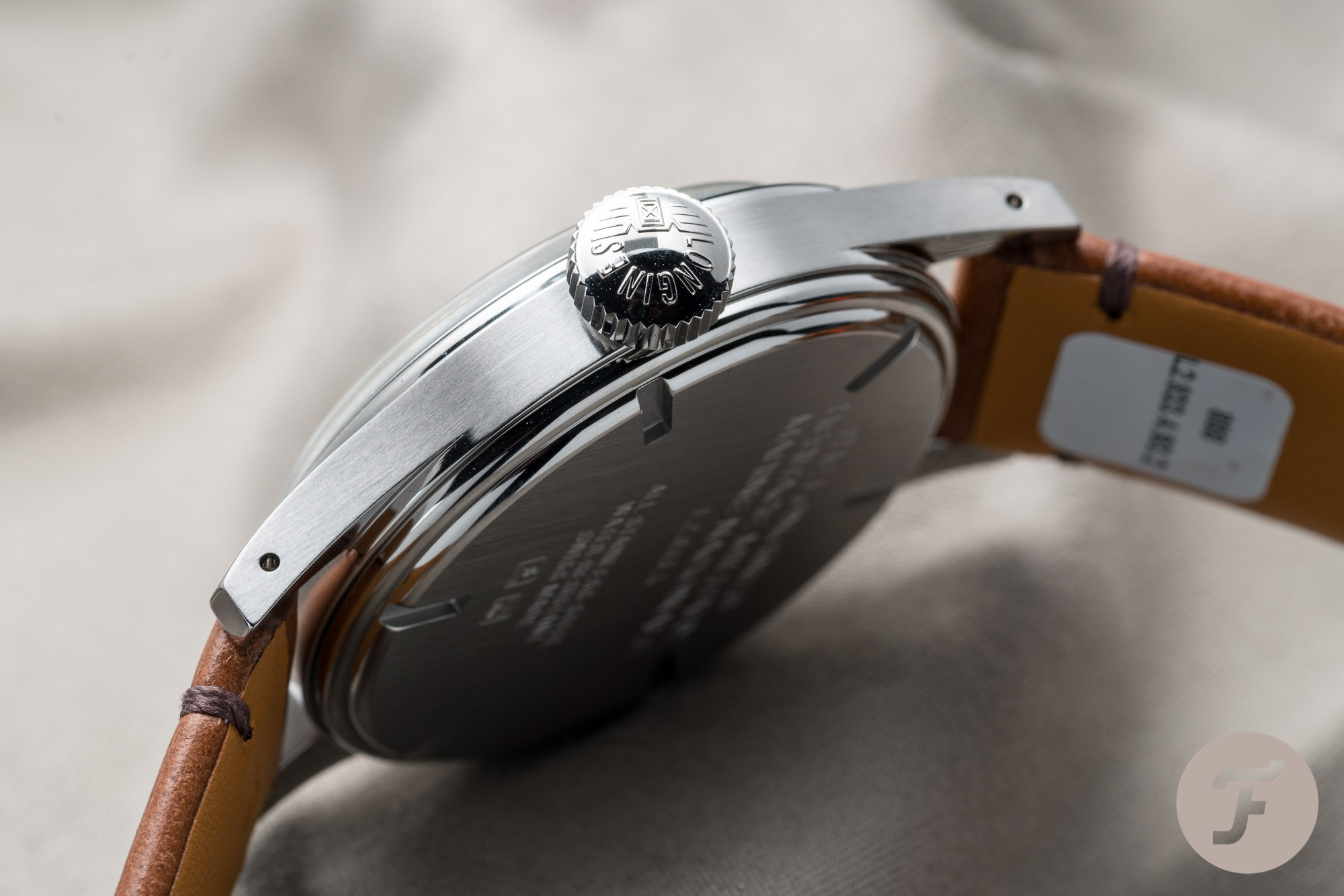 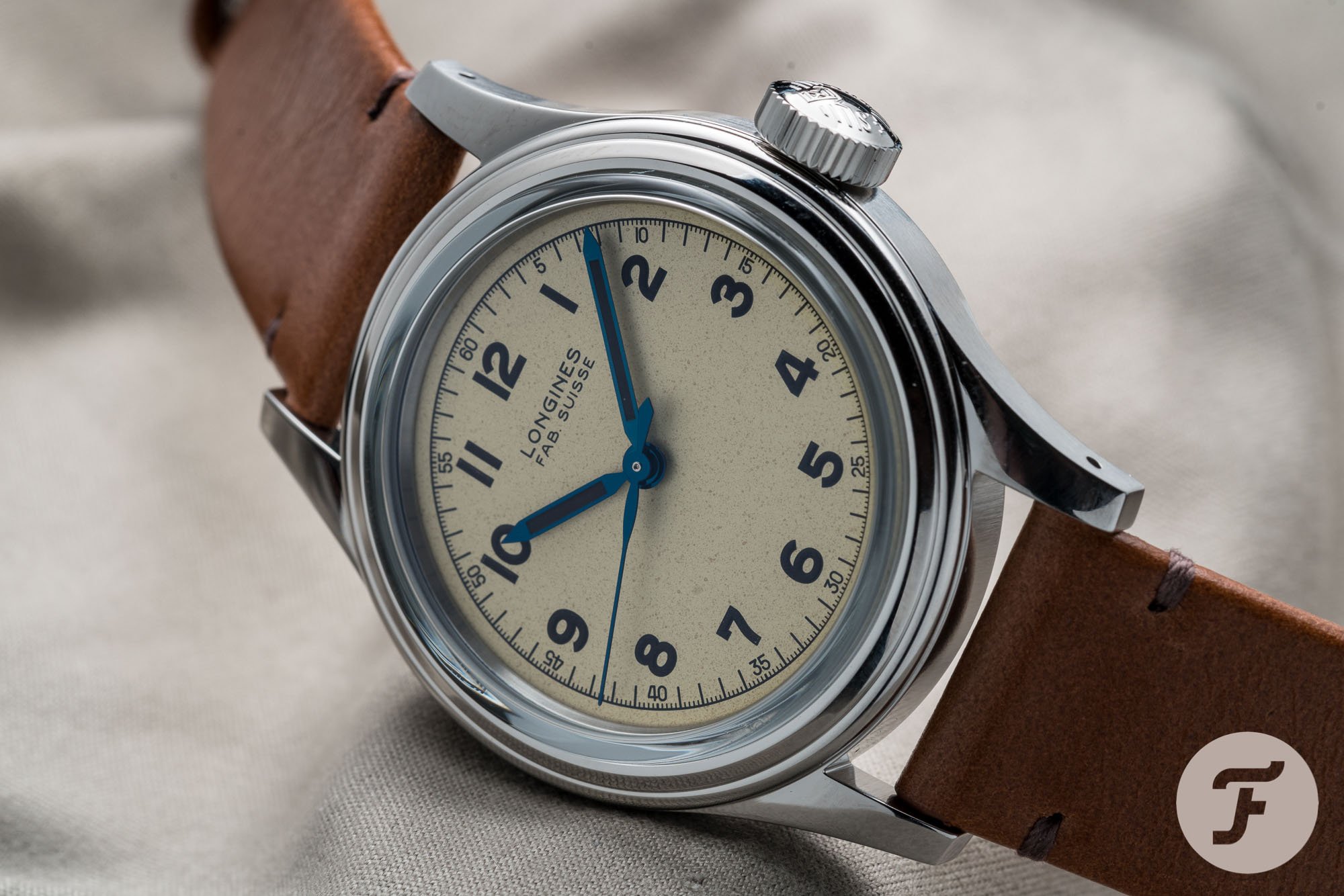