A long time ago, in a galaxy far, far away
Rob Nudds
comments 2
Share

When I finally got my shot at writing about watches for aBlogtoWatch way back in 2015, I was set an initial task that would serve as my probation: three articles to be turned around in a week. If they were up-to-scratch, I would become a member of the team. Given the years I’d invested in earning that opportunity, the pressure I felt was immense. No surprises, then, that the subjects of those three trial articles have remained in mind ever since. One of them, The Zenith Academy Georges Favre-Jacot 18k Gold watch recently popped up on Zeitauktion and brought memories of that experience flooding back.

I fancy myself a pressure performer. In any sporting contest, while never the superstar, I always wanted the ball/disc/puck to fall to me at the key moment. Let me hit the free throw shots I’d been missing all season with the game on the line. Throw me up a duck in the back corner of the end zone and watch me beat the six-footer covering me as time expires. Hurl a full-court hammer pass in my direction if you want to see a toe-tapping catch to avoid overtime… Conversely, whenever it comes to doing the simplest things, I had (and still have) an amusing habit of completely dropping the ball (metaphorically and, regrettably, literally). That’s why I love pressure. It brings out the best in me. Sure, it might be at the expense of my follicular health, but baldness is distinguished, right?

George Kern nods like Robert Redford at the end of Jeremiah Johnson; Rob feels better about himself for a moment.

A baptism of fire

Therefore, it was perhaps fortunate that the trial that defined my career came with so much pressure. One of the three pieces I was charged with covering was the Zenith Academy Georges Favre-Jacot 18k Gold watch. It was a piece that took me a little while to warm up to at the time, but one that wowed me when it finally revealed its backside. I remember commenting that there were a few dial elements that perplexed me at the time (especially the seemingly jarring hand style between the hour and minute indicators and the sub-dial pointers) but had effusive praise for the main event — the fusée itself. 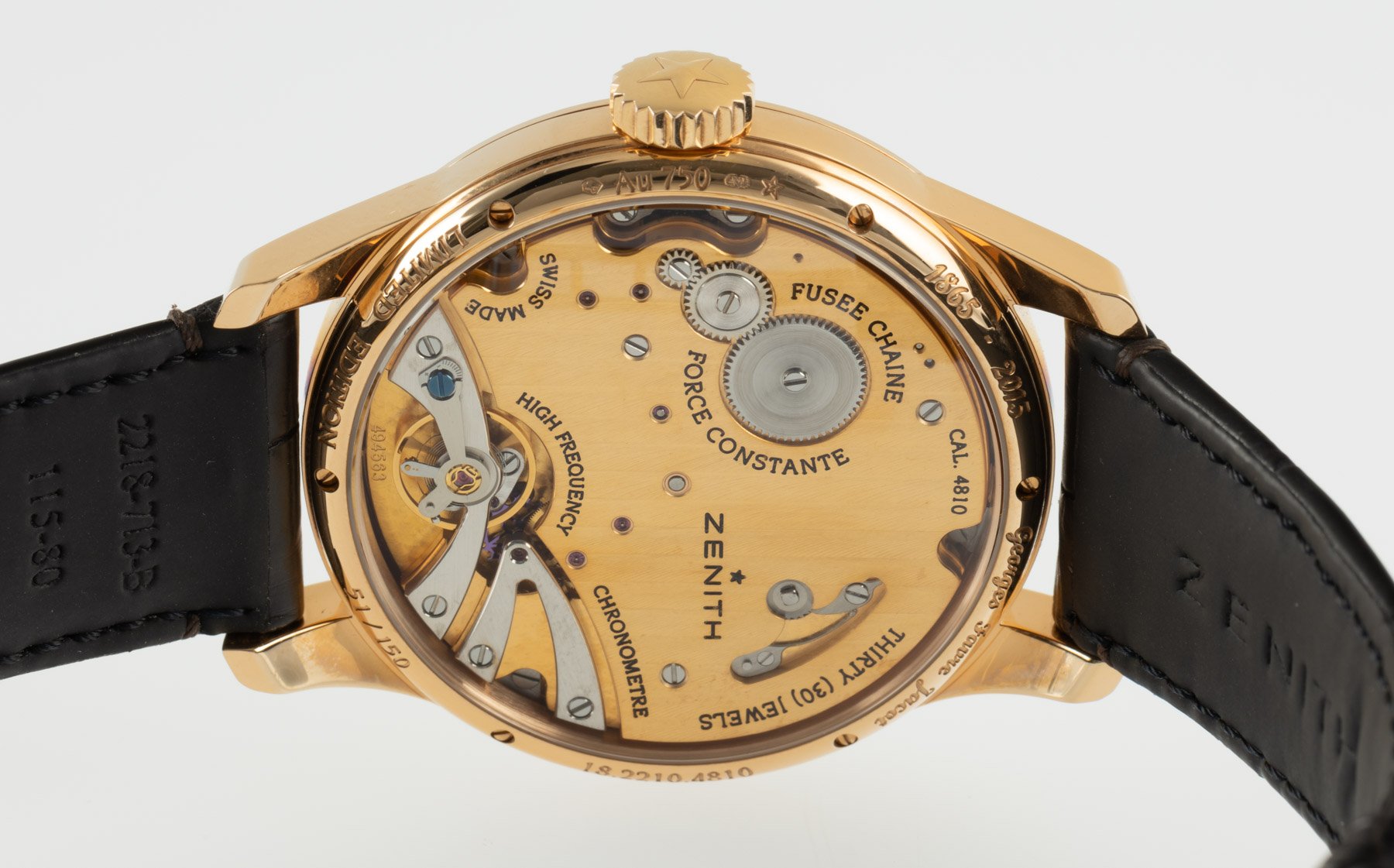 What is a fusée, or constant force mechanism?

When you wind the mainspring in a watch it wants to unwind itself as fast as possible. The regulating organ in a mechanical wristwatch (the escapement) controls the regularity with which that power is released. It chops up the power supply into theoretically identical chunks, but there is a little more going on than that.

Even though the escapement locks and unlocks at the same rate throughout the watch’s operation (theoretically), there is more power going through it when the mainspring is fully wound than when it is close to giving up the ghost. A constant force mechanism attempts to flatten that curve and provide the escapement with impulses of identical strength from start to finish. 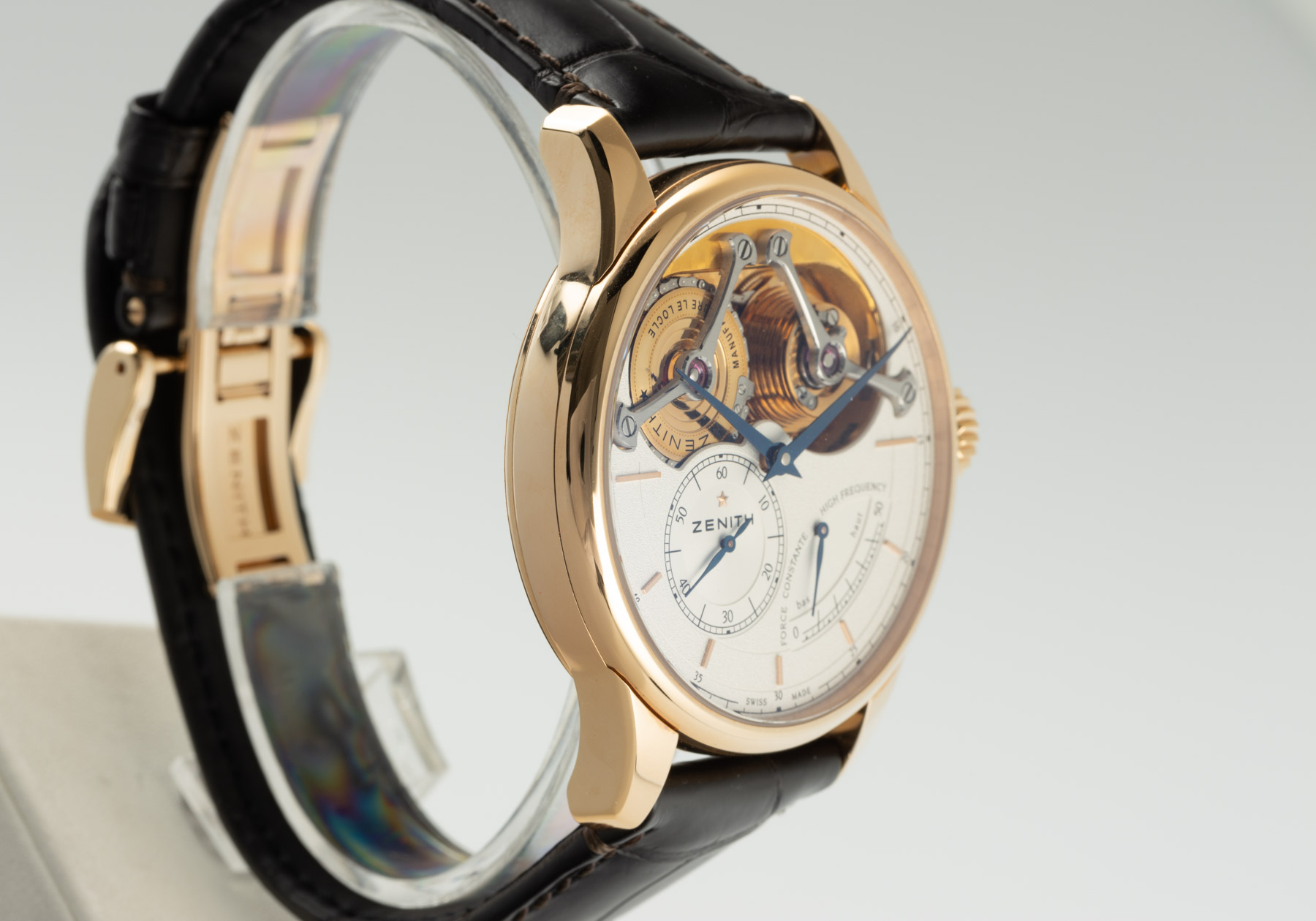 These mechanisms generally have a detrimental effect on power reserve, as the lower capacities of a mainspring’s charge are chopped off to ensure there is no reduction in performance as the spring reaches the end of its unfurling process. As such, despite rather hefty dimensions of 45mm across and 14.35mm thick, the Zenith Academy Georges Favre-Jacot has a power reserve of just 50 hours. 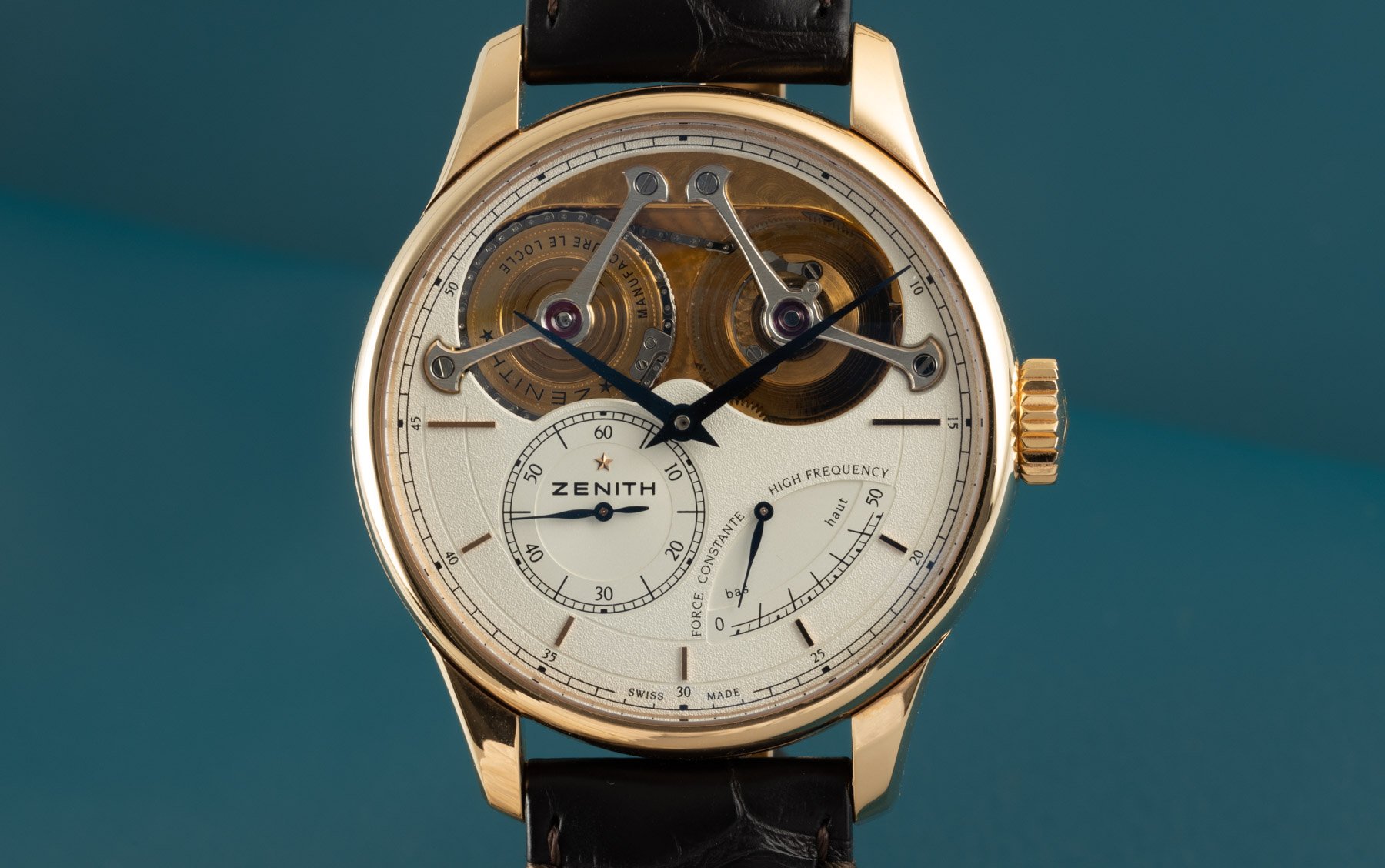 While that isn’t much these days for a mechanical timepiece, it is sufficient for one day’s optimal operation, which is really enough for this kind of watch (in my opinion). I’m not just making excuses for this glittering beast because my feelings towards it have markedly softened over time: I really do see this kind of model as an occasionally worn piece. It is a talking point. In fact, it is a conversation starter like few others. The partially skeletonized dial reveals the fusée and its chain mechanism for all to see. It really is a stunning component, and while I stand by my original assessment that more could have been done with the remainder of the dial, it may not really matter. I mean, who’s looking at it anyway? 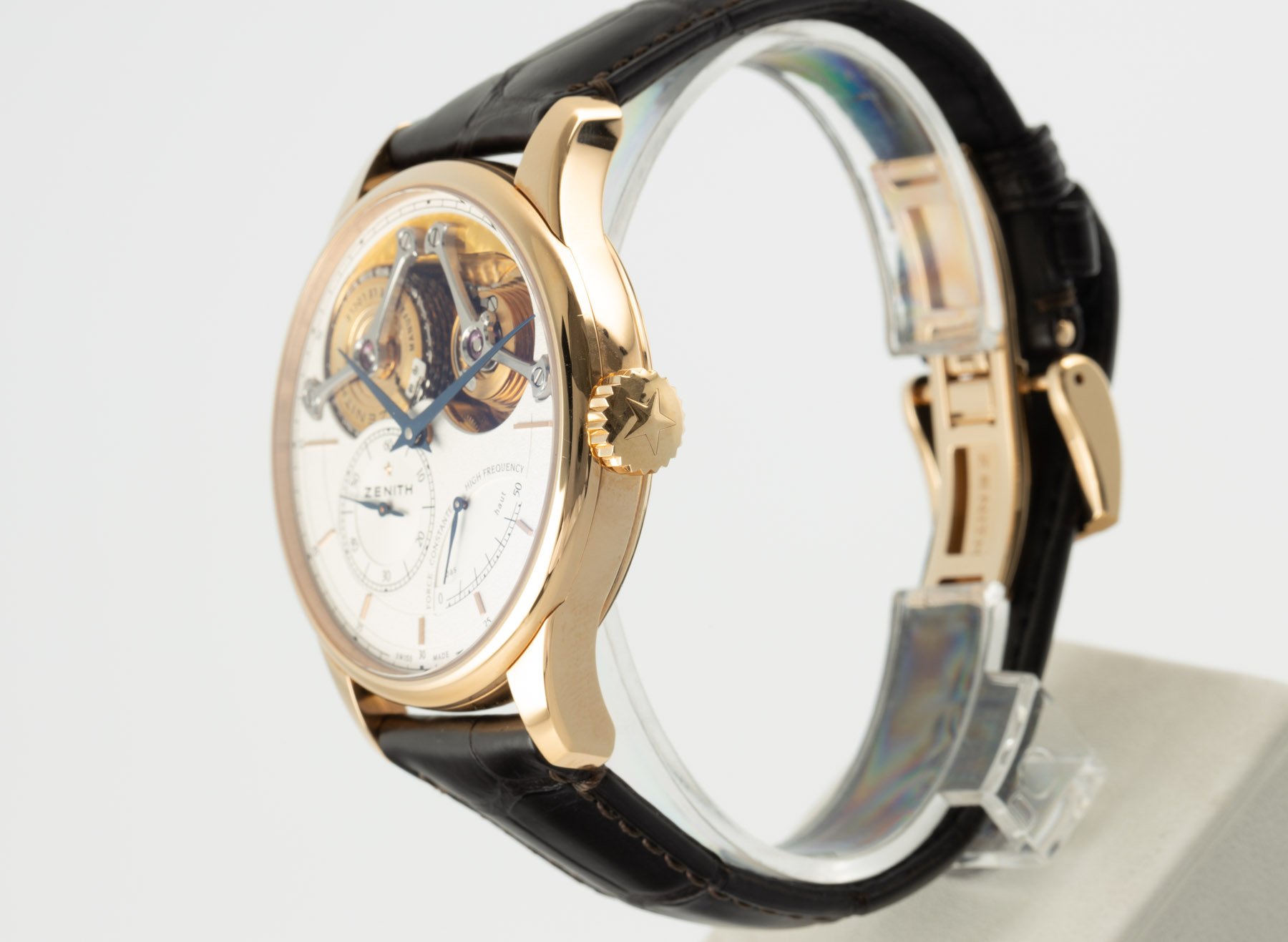 Creating the chain links that go into mechanical wristwatches with fusée mechanisms has always blown my mind. When I first saw this watch, I marveled at how the light interplay between the industrial-looking micro-chain and the brushed and polished barrel made for an unrivaled view. While some will balk at the complexity, finickiness, and razzle-dazzle of such a piece, I have to doff my cap to Zenith for even thinking something like this would fly in the modern watchmaking landscape. 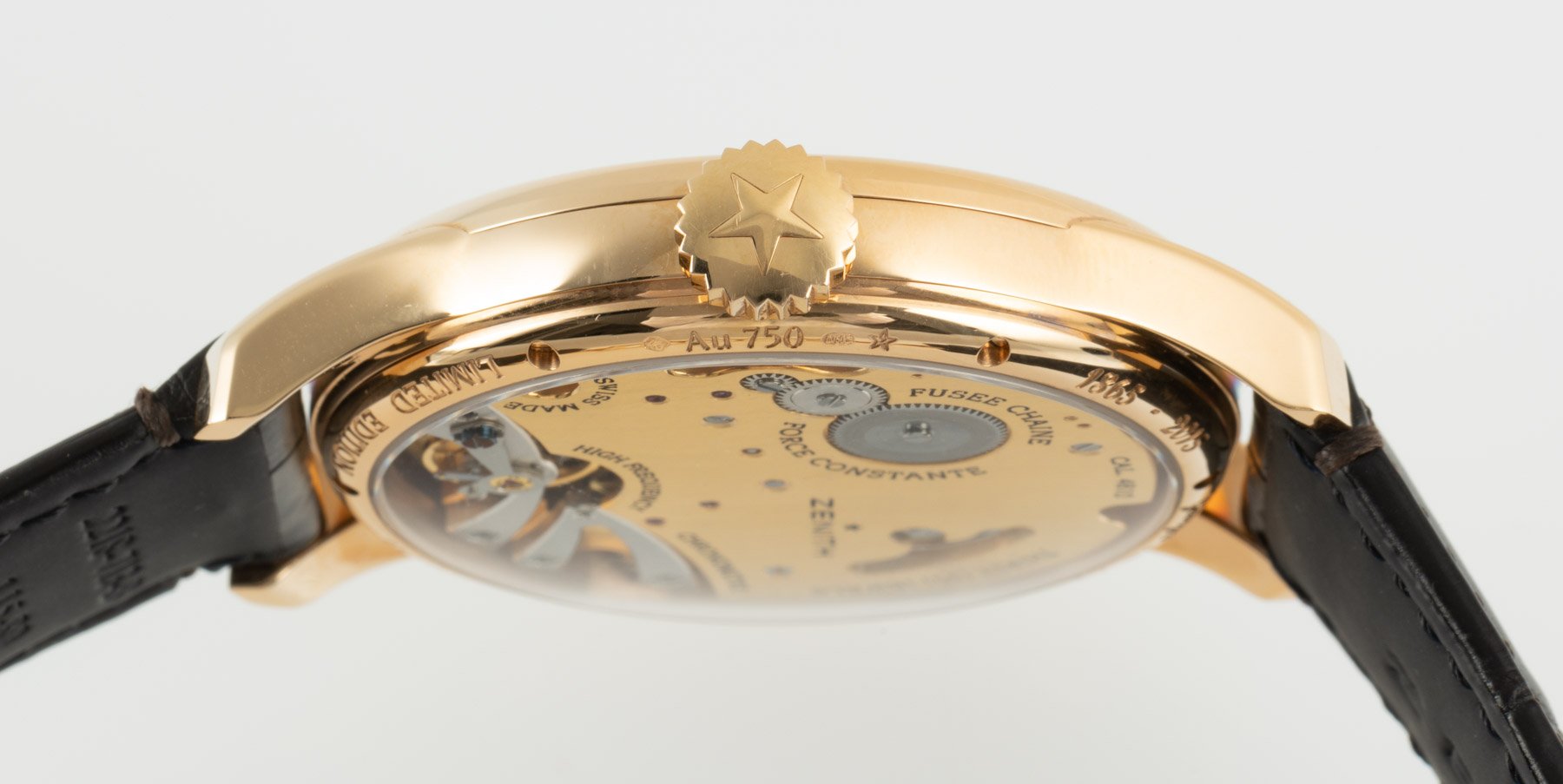 Why am I telling you about this now?

I was browsing Zeitauktion the other day as I like to do when I’m taking a break from my daily duties, and this beauty popped up. It immediately drew a warm smile of recollection, but that’s not why I’m writing about it. No, what really piqued my interest was the price. This piece was initially released to mark 150 years since Zenith’s foundation in 1865. Now, as the company reaches its 156th anniversary, the model created to mark the former milestone can be had for a fraction of its original cost. When it debuted, I quoted a retail price of $82,700 (that’s about €70,000 by today’s exchange rate, although Zeitauktion states the list is more like €68K). Adjusted for inflation, that $82,700 in 2015 becomes roughly $95,000 today, which works out as almost €81,000 in 2021. 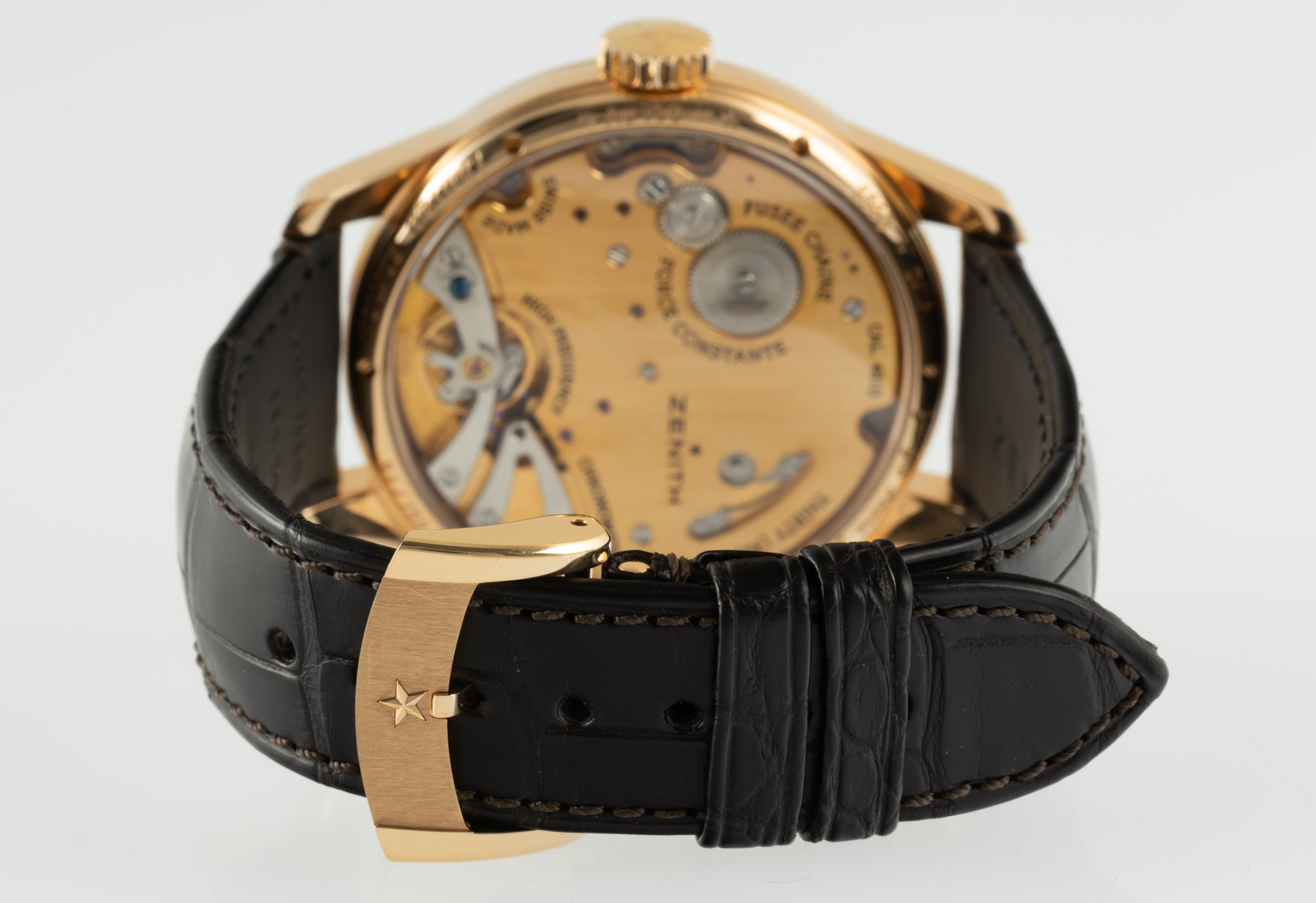 Even though this reference was limited to 150 pieces, the price since release has tumbled to a much more affordable (although still admittedly hefty) €38,300. Now, while that’s surely a lot for almost anyone and a pretty significant depreciation on the original purchase price, it is surely a lot closer to the piece’s actual value. 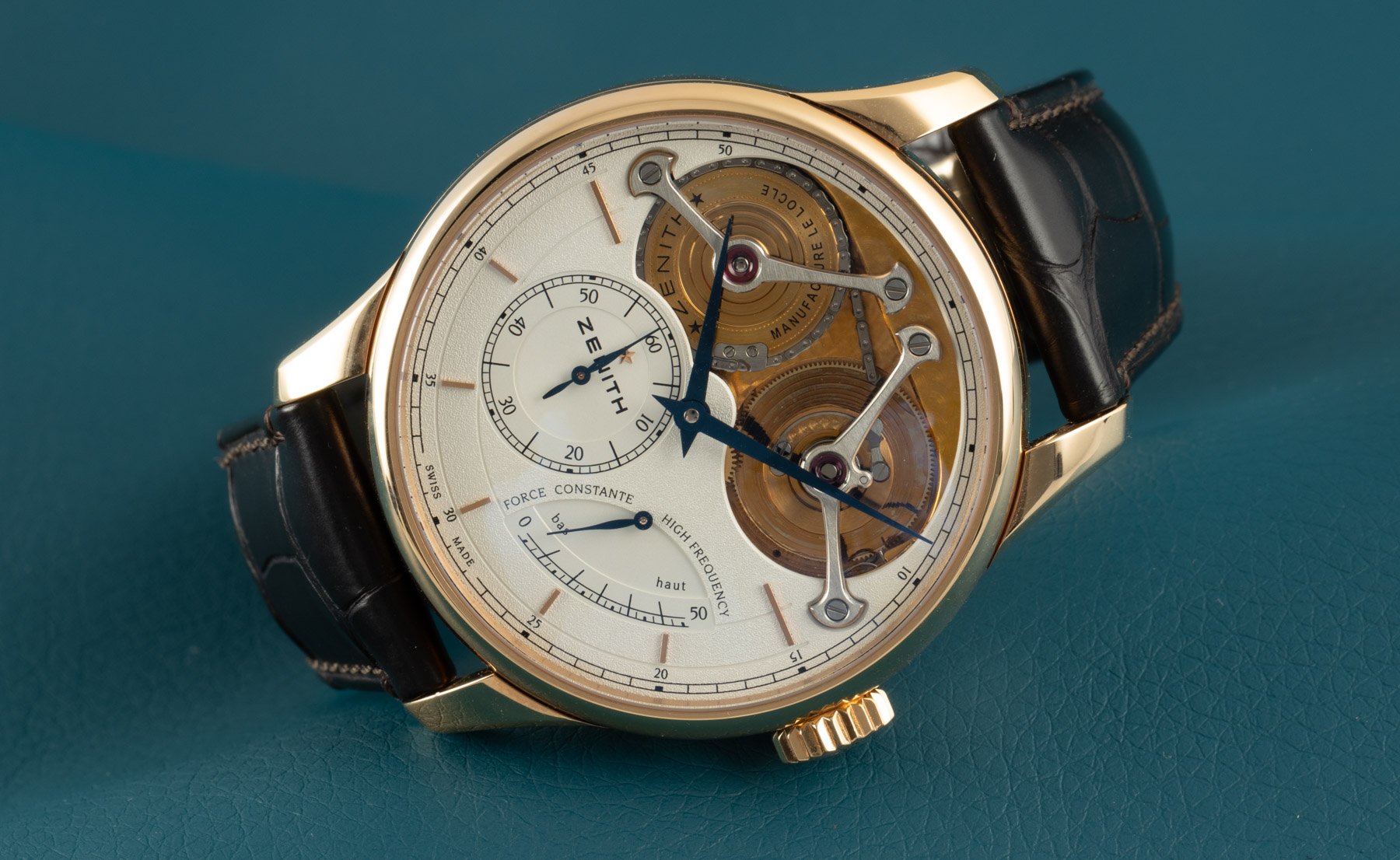 It raises an interesting discussion: should you only buy watches when they’re on the up? We see peaks and troughs in all kinds of industries and the key is normally to buy low and sell high. Perhaps there is little to suggest this Zenith will ever rebound as an investment piece, but given its limitation and exceptional finish and complexity, it might not be the worst idea to consider it now (at almost half its original price). If you can afford it and you love the look of it, buying it at around 50% of the original ticket could be an attractive proposition. Who knows? In 19 years’ time when the 175th anniversary rolls around, the interest in a model of this nature could be renewed (and if the price of gold continues to trend upward, you might be able to trade it in for scrap by then). 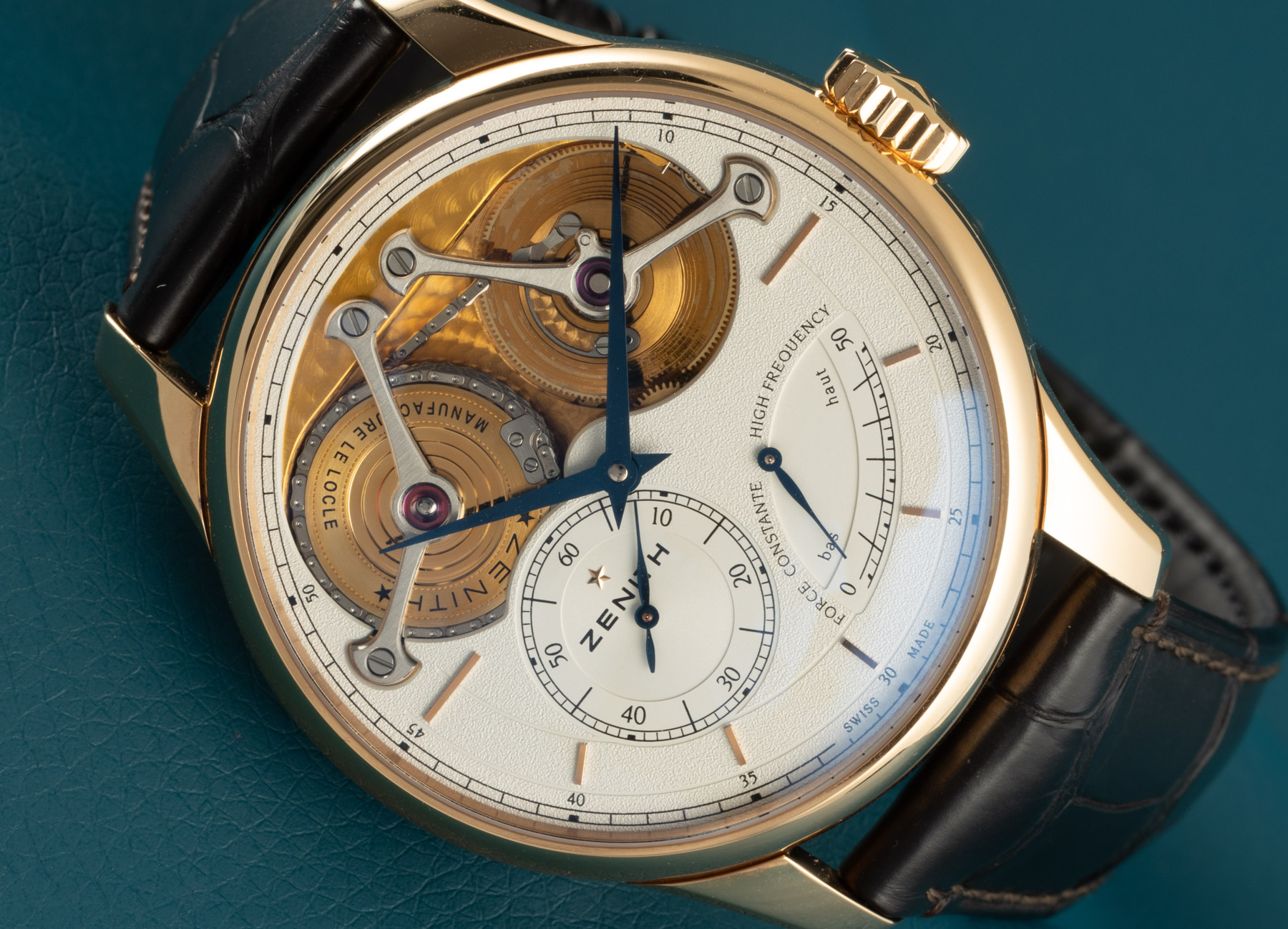 If this model is something you’ve been considering (or if you’re entirely new to it and want to learn more), it was still available on Zeitauktion at the time of writing so you can pop along there to check it out. If you’d like to read my original review of it on aBlogtoWatch, you can find that here also.

Hot Topics
Introducing: The Omega Speedmaster Super Racing With Spirate System
165 comments
Design Vs. Specs — Which Is More Important To You When Buying A Watch?
87 comments
New Release: The Limited-Edition Seiko Prospex SLA067J1 Diver
59 comments
My Predictions For New Omega Speedmasters In 2023
57 comments
The Time To Buy Is Now: How The Current Economic Climate Influences Watch Buying And How You Should React
51 comments
Popular
Certina DS PH200M – Hands-On Review
Balazs Ferenczi
23
(From The Archives) Shut Up & Read The Truth About Cartier Watches
George Cramer
21
#TBT A Vintage Seiko Buyer’s Guide to Affordable Goodness
Michael Stockton
32