My recent article on the new Royal Oak Offshore made me curious about the pre-owned market for these models. Spoiler alert: don’t expect anything cheap here. But, I am also happy to see that some of the prices are rather sane. Making some of the AP ROOs more interesting than a new over-retail Rolex.

I never have owned a Royal Oak Offshore watch. At the time, when I purchase my Royal Oaks, I was just more into those than the Offshores. That said, one of the first APs I ever saw was Gerard’s Royal Oak Offshore triple date model (reference 25808ST). If I am not mistaken, he disliked the white date hand so much, he bought a little bottle of Revell paint and made it anthracite. Unthinkable today, but that’s how he rolled in the late 1990s. Knowing him, he would probably even do that today.

Anyway, I made sure to include one of those watches into this list of 5 pre-owned Royal Oak Offshore watches today.

As you perhaps know, it was AP’s designer Emmanuel Gueit who was asked in 1989 by then CEO Urquhart (later on CEO of Omega) to come up with a bold(er) version of the Royal Oak. Not entirely comfortable at first, AP decided to introduce them in 1993. Interesting fact: the first 100 Royal Oak Offshore 25721ST references (The Beast) do not have “Offshore” engraved in the case back.

The Royal Oak Offshore Triple Date has a ∅39mm and was in production from 1996 till 2000. An excellent alternative (or solution) for those with small wrists but who like the typical Offshore look: bulky case, rubber seal, and rubber crown. As you can see, those older ROO models had rather a Clou-de-Paris pattern on the dial than the later introduced Mega Tapisserie. Inside is the Jaeger-LeCoultre based 2127/2827 movement. This ROO Triple Date 25808ST comes with box and papers, a blue leather strap and an AP signed folding buckle. Click here for the offer on this ROO Triple Date. 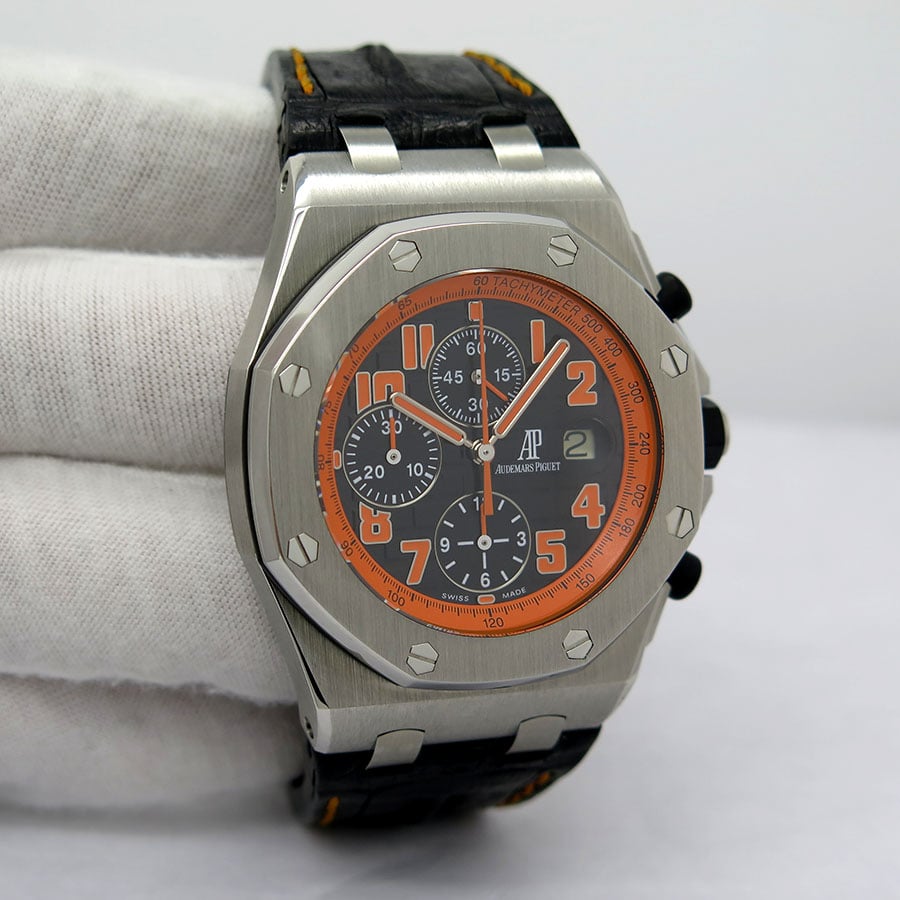 The first AP ROO Themes in this overview of pre-owned Offshore watches is this Vulcano model. As you will notice, the reference is all the same for these watches, but the official reference number is also much longer. Somehow it is common to only state the first few digits. Officially, this is the 26170ST.OO.D101CR.01 reference. A ∅42mm and a lug-to-lug of 54mm. Inside is the AP 3126/3840 movement. Basically an AP 3120 movement with a module for the chronograph. This module is designed by Dubois-Depraz. The 3120 was used for a long time in the RO 15300 and 15400 references (a.o.). This Royal Oak Offshore Vulcano comes with box and papers and is offered by a dealer in the United States. Click here for the offer on the ROO Volcano. 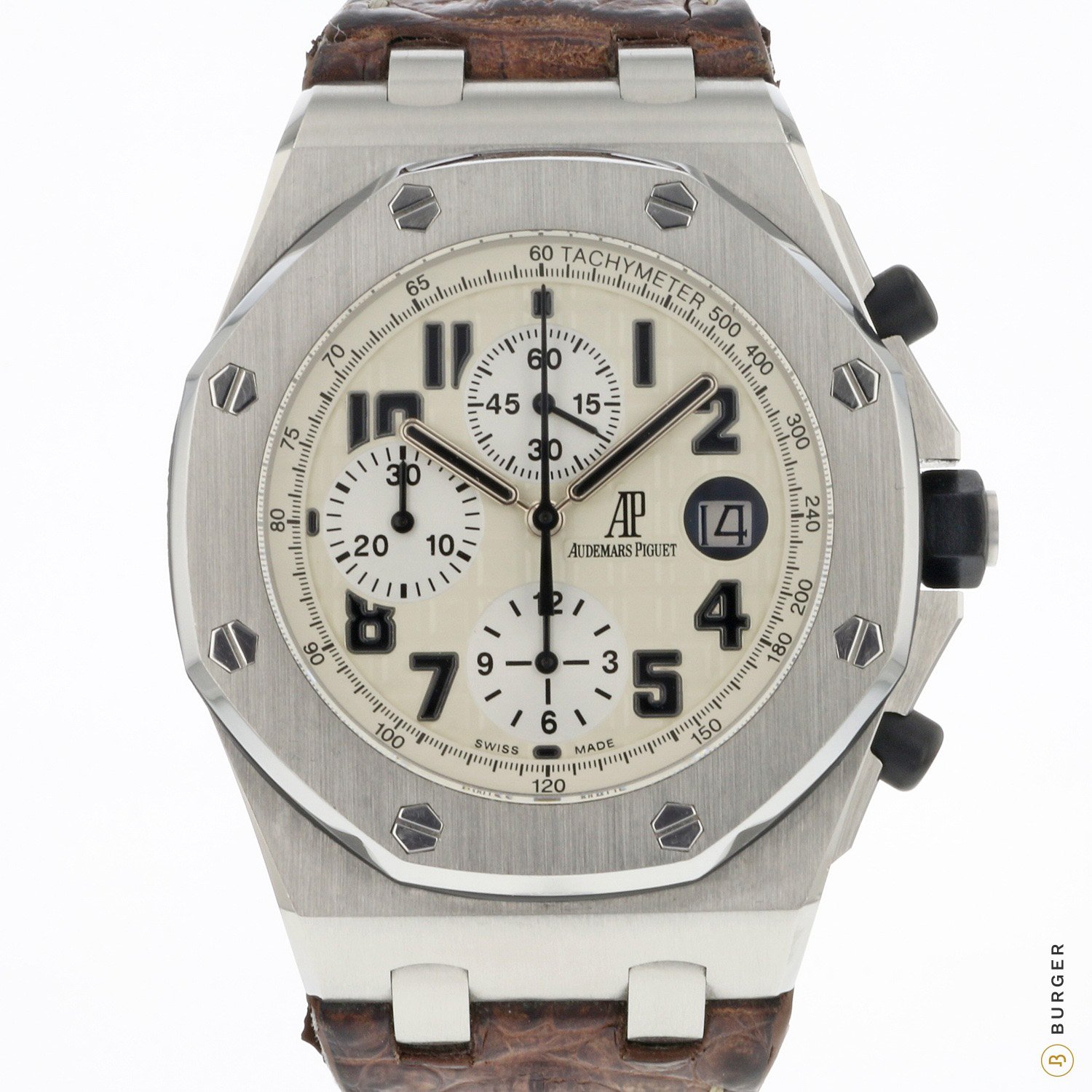 The AP Royal Oak Offshore Safari is my favorite of the themes collection, and I have considered it in the past. However, at the time I felt it was too bulky (also 42mm x 54mm, of course) and went for the regular Royal Oak (chronograph) 26300 instead. What I like best about the Safari is that creamy colored dial in combination with the brushed steel. It gives just enough contrast to stand out. The brown alligator strap fits perfectly as well. The specifications are similar to the Volcano and Navy models. The price of €13,500 seems to be quite stable for a few years. In this case, though, it is a watch-only, so no box or papers. This watch is offered by a Dutch dealer that I have dealt with on several occasions myself, great guys. Click here for the offer on this ROO Safari. 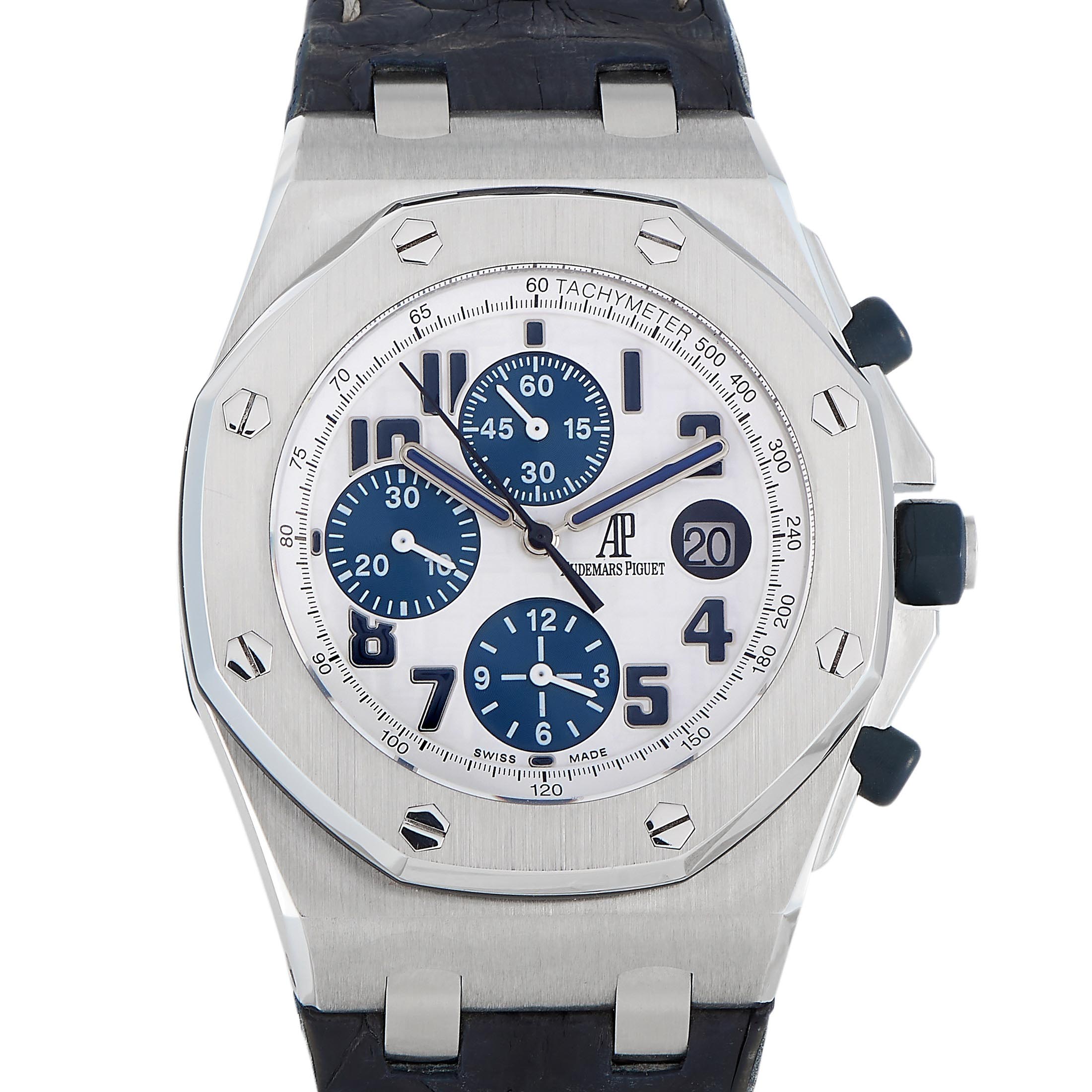 Playing safe with the Navy, especially compared with the Vulcano. But is that a bad thing? I don’t think so. It is a lot of money in the end, and you still want to like this watch 10 years from now. At least, that’s my way of thinking when choosing a watch. Will I still like the design or colors xx years from now? With the Royal Oak Offshore Navy, chances are very big. The Safari would still be my pick, as I also feel it is rather timeless. The full reference number for the Offshore Navy is 26170ST.OO.D305CR.01, indicating this specific version of the Themes collection. Like the Safari above, this watch comes without a box or papers. A complete version will cost you more, for sure. A separate box can be sourced via eBay or Chrono24, but getting the original paperwork is quite tough (talking from experience here). AP will only hand these out once, with the initial sale. Click here for the offer on this ROO Navy. 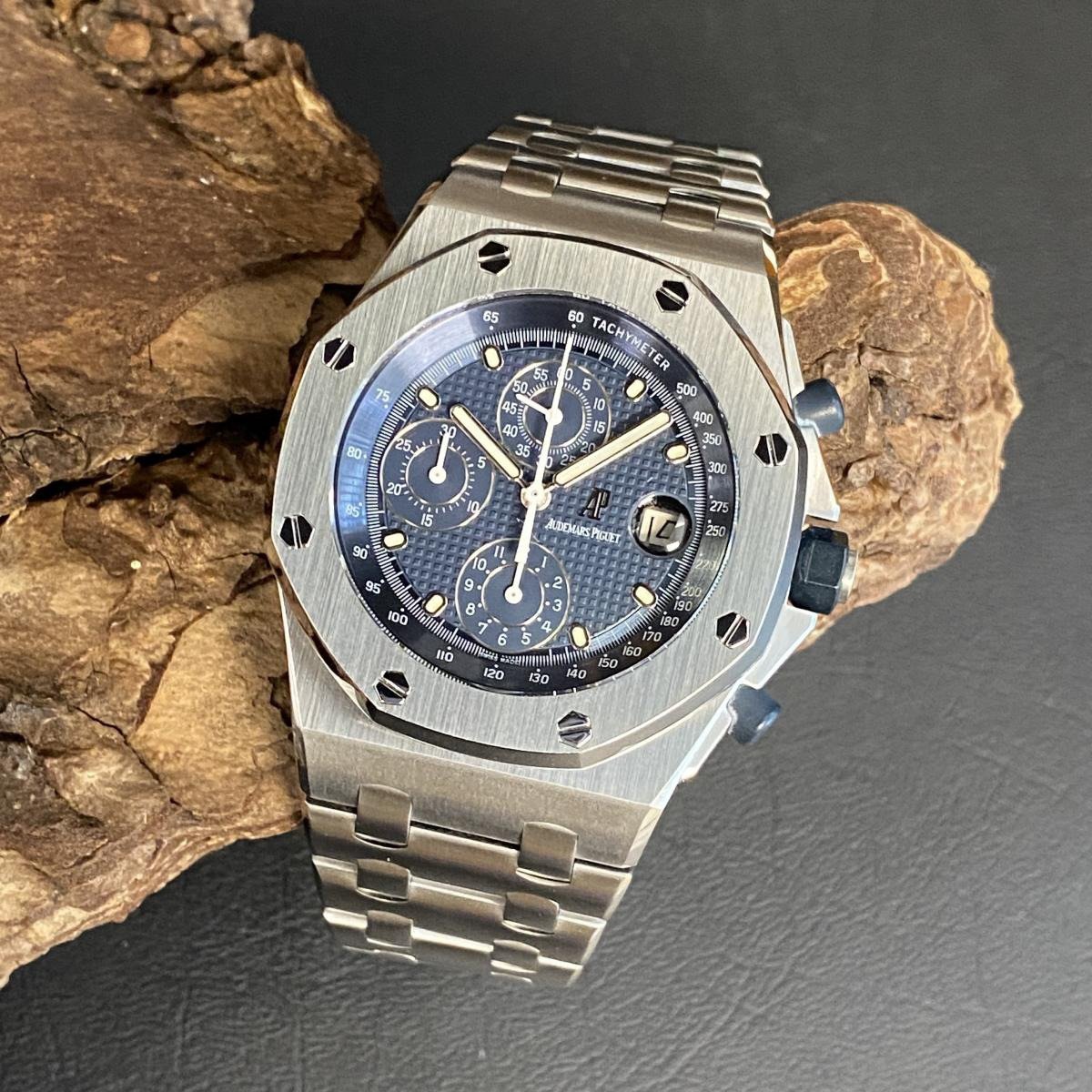 My favorite of these Royal Oak Offshore watches is The Beast. The Offshore watch that was introduced in 1993 and still is in the collection being the reference 26237ST. Anyway, this 25721ST dates back to 2002 and comes with boxes and papers. The new 26237ST has a retail of €28,100, so not that far away from this pre-owned Offshore The Beast, but collectors might prefer this older reference. This Beast is also the only ROO in this overview that comes with the beautiful steel Royal Oak bracelet. One of the most comfortable bracelets I’ve ever tried. The finish of these bracelets is also marvelous, with its satin brush finish surfaces and polished angles. Some complain that these Royal Oak bracelets (and cases) are scratch magnets, and think because it is of the steel they use. This is not the case, of course, it is due to the type of finishing that scratches are just better visible. If scratches are a concern, you might want to stay away from any Royal Oak watch. Click here for the offer on the ROO Beast.

As always, make sure to do your homework when you are after a pre-owned watch. Good hunting!