When I look at the vintage time-only Omega watches that I own, I see a pattern. Most of them are from the ’50s. They have a larger 35mm+ case size and a second’s sub-dial at 6. I don’t know why, but I’m just drawn to these timepieces like this excellent reference 2639(-14) with golden stardust dial and Dauphine hands.

Today’s subject is not my first 2639. Throughout the years I’ve been collecting watches, I came across a good few examples. Still, I have to say; this is the most beautiful example I have ever had. There is just something special about watches with black dials. Although I’m not a big fan of gold indexes and steel cases, it just works well with this 2639.

The first thing we should do when looking at vintage watches is determining their ages. In today’s world, this is relatively easy. This reference, the 2639, is a fashionable vintage watch due to its size, movement, and a large variety of dial versions. While it came to the market in 1949, most 2639 models are from the early 50s. Caliber 265 was the first movement Omega sold this watch with. Then came the caliber 266, the same one as I have. Since the watch has a screw-down case back, it was water-resistant to 30m. Not a lot but gives you a bit more protection in the rain or while washing hands. This is all I’d do with the watch on. Every example of a real 2639 that I ever saw had a steel case. By real, I mean no Franken watch. Sadly, you see many of them. 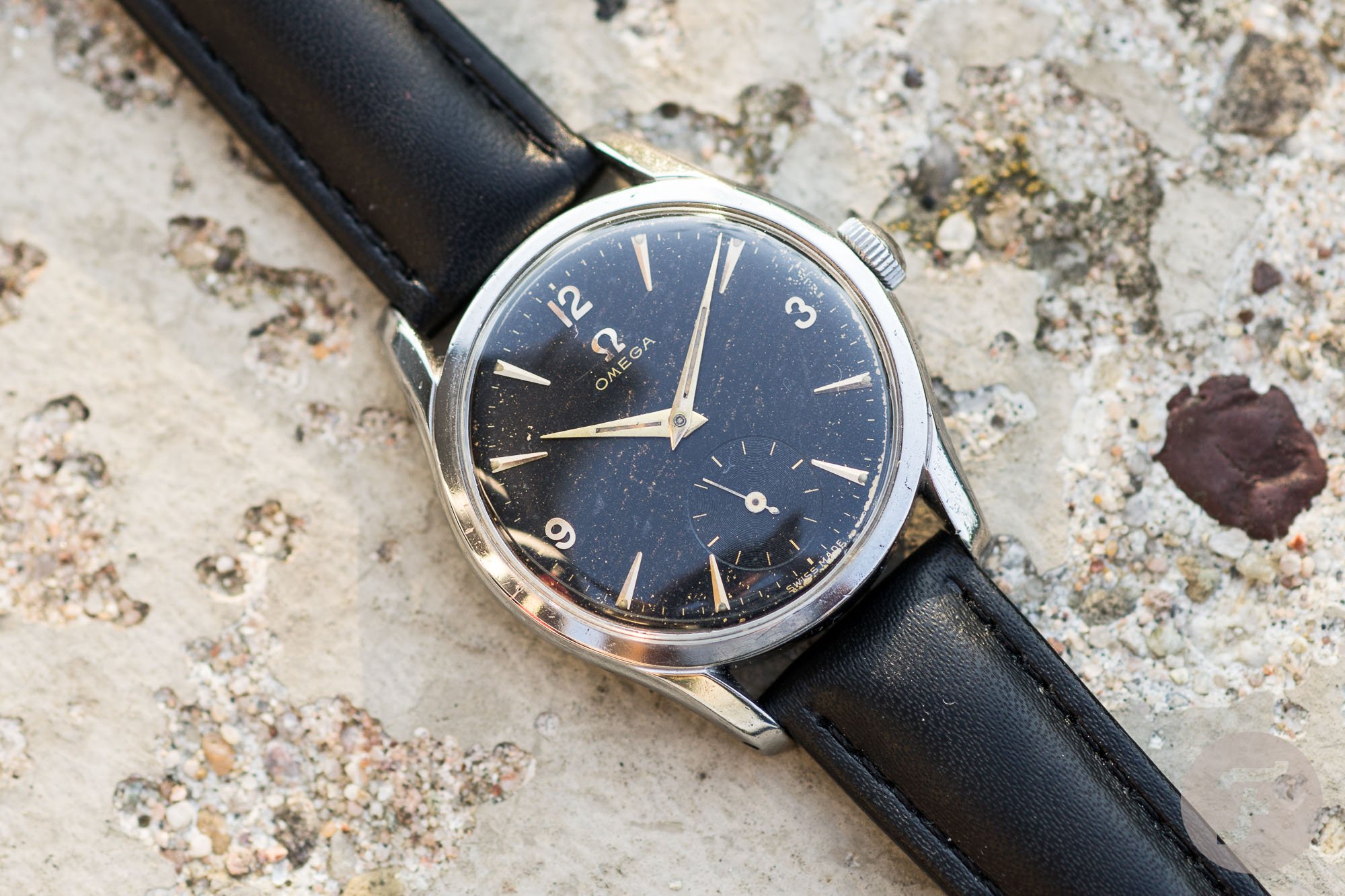 It is virtually impossible to look at eBay and not come across at least a handful of 2639s. The watch is everywhere. My watch’s full reference is 2639-14, which shows you the large number of iterations this model had. Various dial colors, indexes, and numerals. Still, it makes sense to search for the full reference before you buy a 2639. If you can find at least one other watch that looks like yours, chances are you did well. This is the beauty of the 2639. Whether you want a bright dial or black, indexes, or numerals, you’ll find one you like. I like the combination of black dial and gold raised indexes. For me, it gives elegance to the piece, mainly since both the logo and the indexes are applied. 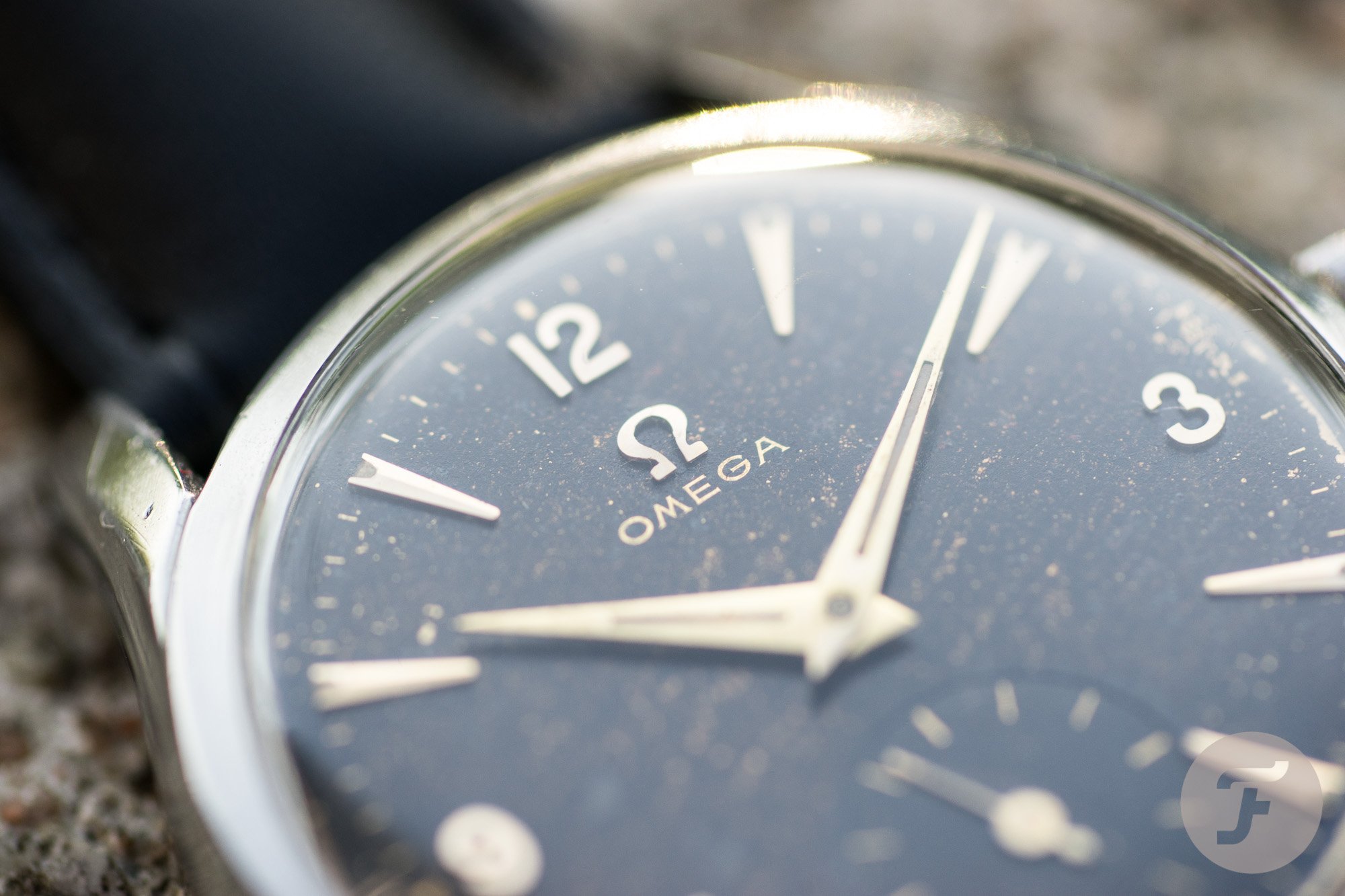 I hate to call this watch a jumbo. To me, it is not. I talked about the Omega reference 2505 in one of my earlier articles. That one, with its 38mm case, is genuinely a large Omega for its time. Some also call the Seamaster 2657 a jumbo. That is not much larger than the 2639. However, due to its thick bezel, the 2657 visually looks smaller than the 2639. The truth of the matter is, the subject of today’s article is around 35.8-36mm wide. As such, it is perhaps a couple of hundredths of a millimeter smaller than the 2657. 43.1mm long from lug tip to lug tip and, thanks to its manual wind caliber, only 10.5mm thick. As such, the 2639 is a great everyday watch. Not too large, but prominent enough. It fits under your cuffs and on the right strap it looks a million bucks. 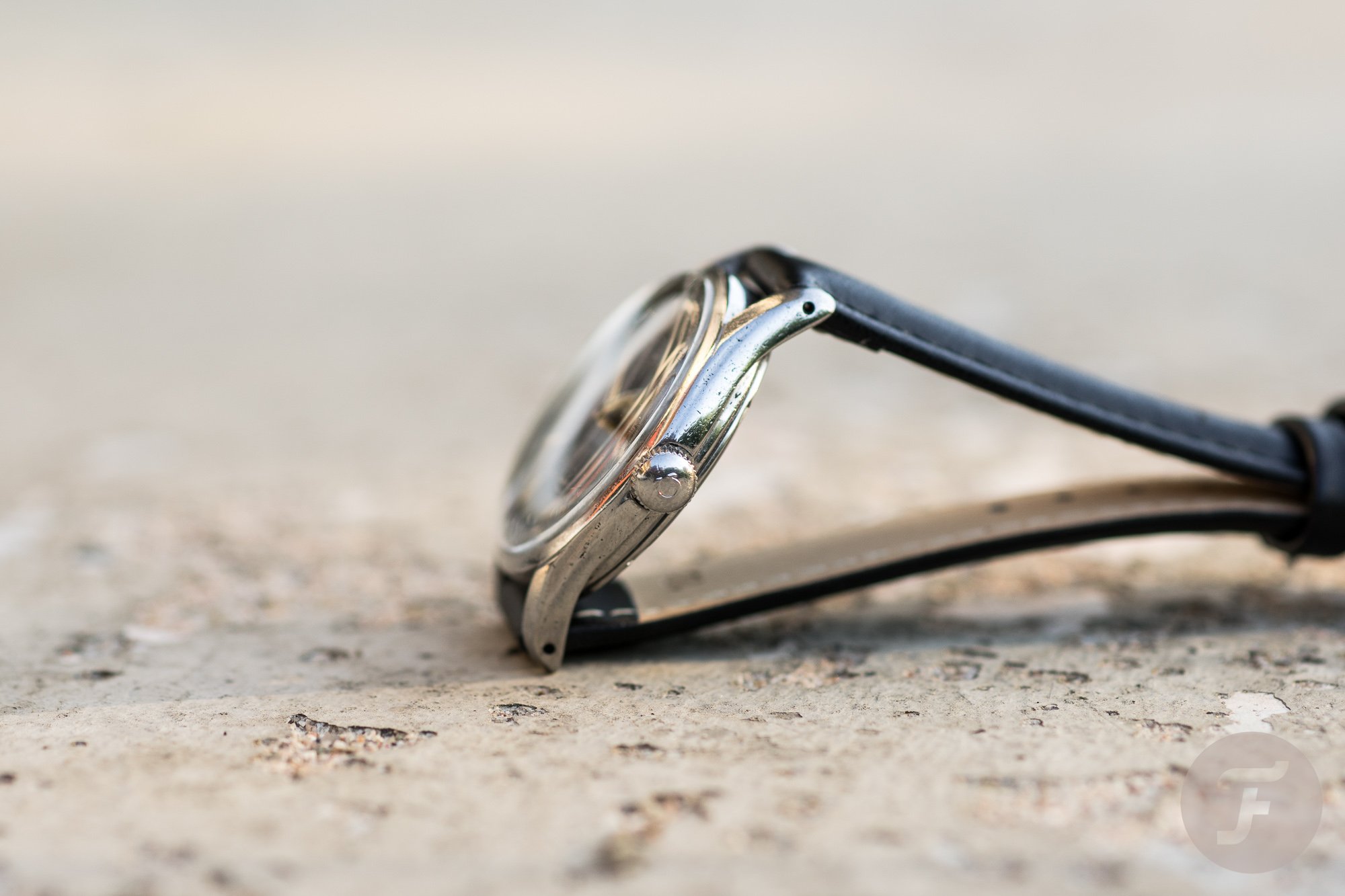 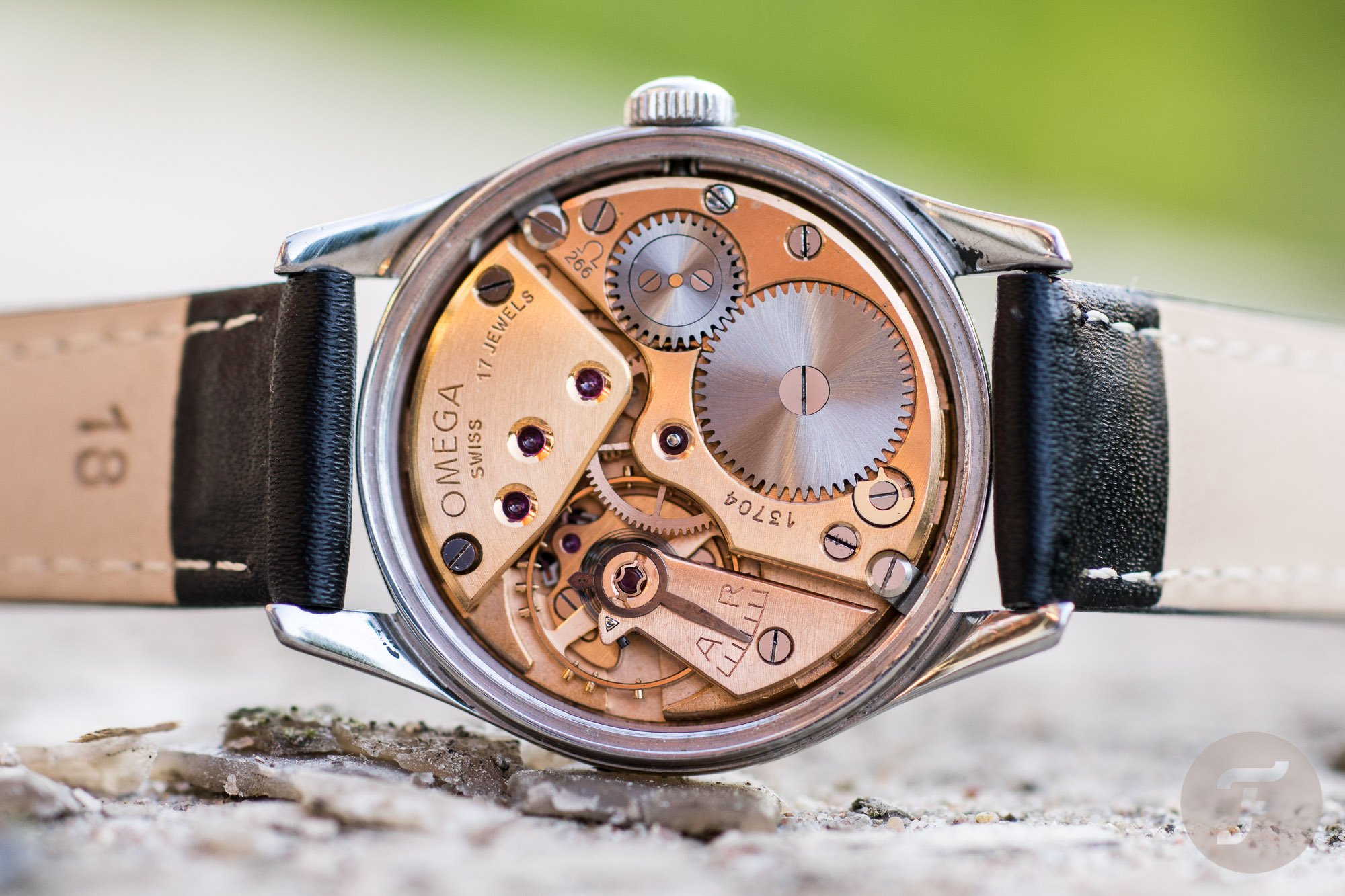 The caliber inside the Omega 2639 is the 266. The company produced this movement in large numbers and used it in many of their references. The 266 comes from a very illustrious family. Its forefather was the legendary caliber 30. Some of you might member that I reviewed a fantastic book about this caliber not too long ago. The 266 is a better version of the original 30mm with a bunch of improvements. Just like caliber 30, the 266 is also 30mm wide (hence its forerunner’s name), it’s a manual wind with a sub-dial for the seconds at 6. The caliber has a vph of 18,000 and a power reserve of 45 hours. The 265s that went into the earlier 2639 references were 15-jewel, antimagnetic movements. The 266 is also antimagnetic but with a jewel count increased to 17. The 266 is considered to be a workhorse movement that is easy to service. 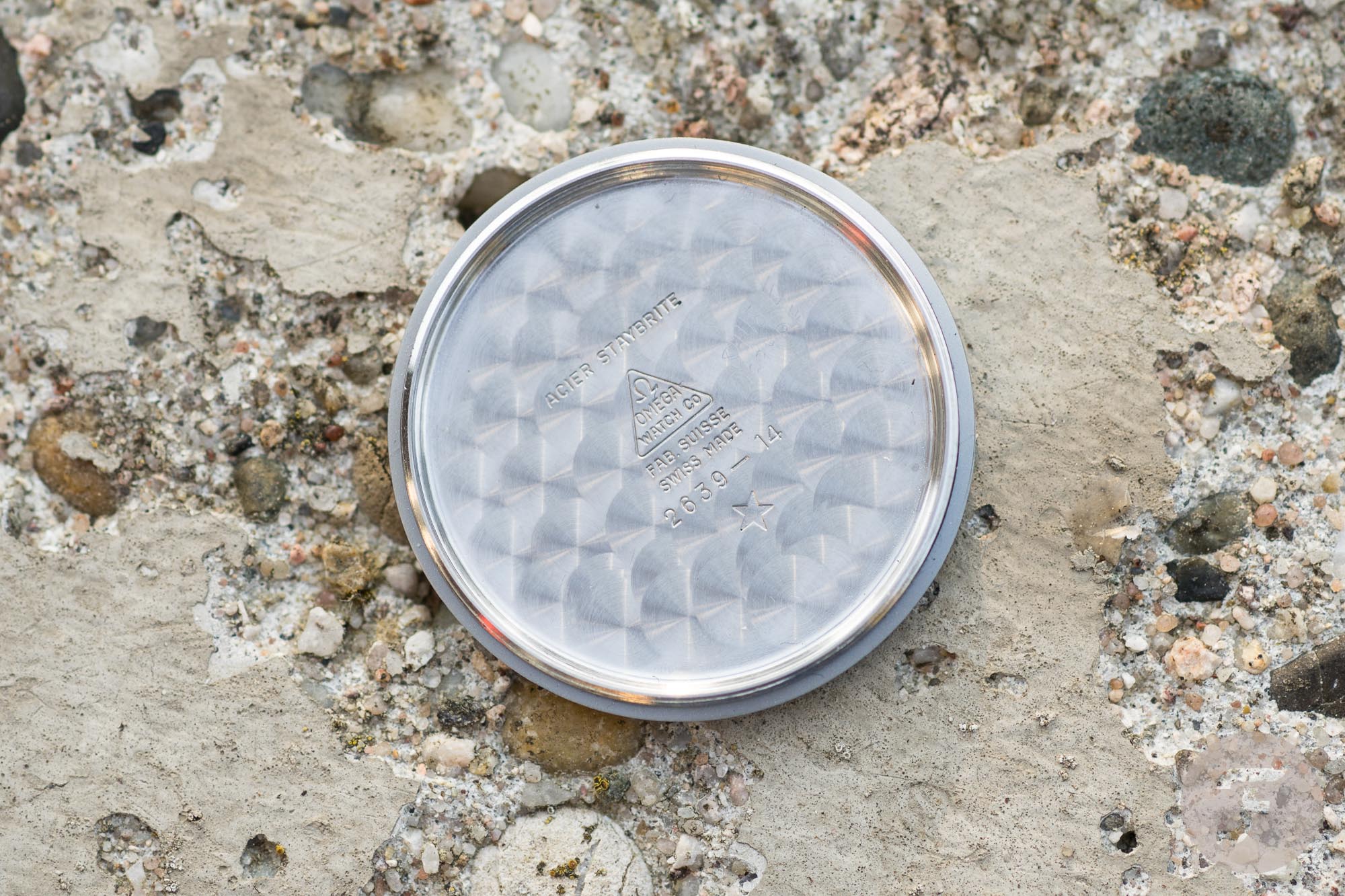 Last but not least, we need to talk about the dial a bit more. As I said above, one of the cool things about the 2639 is the large variety of dials. Omega released many versions over the years. Some had simple dials with painted indexes/numerals. Others were two-tone. Some were two-tone with applied indexes and so on. The 2639-14 has a black dial, with applied gold indexes, numerals (3-9-12), and the Omega logo. At the end of the extended triangle-shape index, you have radium dots. The same radium can be found on the gold Dauphine hands. My watch dial developed a stardust-like gold patina. Although this looks interesting, it is a defect. Or, aging, at least. The dial plate is usually brass, which has a yellow tone. When the paint starts to flake off, the brad underneath becomes visible, creating this exciting effect. 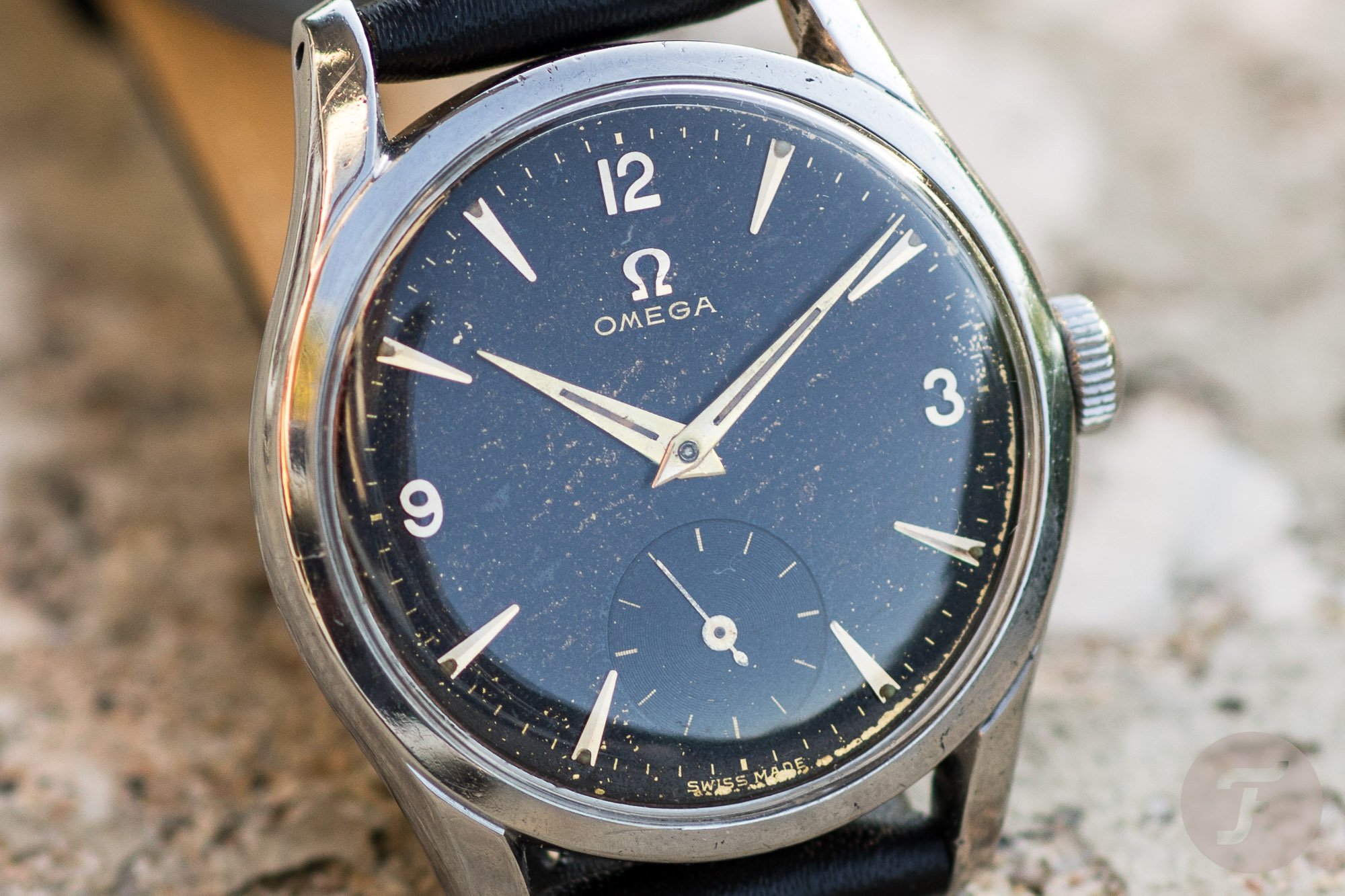 The Omega reference 2639 is a fun watch to have. The size is contemporary enough to wear daily, even on a larger wrist. The dial is clean and straightforward, with subtle little details. Assuming you don’t mind the manual wind movement, this watch is a bargain. You should be able to pick one up anywhere between €400-900. Remember, with vintage; originality is king. So don’t let the over-polished cases and expensive straps fool you. Look for an honest example, even if the case is scratched up a bit. Choose the strap you want, because it is easy to change (thanks to drilled lugs). Additionally, the crystal is acrylic, so polishing or replacing them is no issue. As long as the dial is in good condition, you are good to go.