When Patek Philippe introduced the 5524(G) during Baselworld 2015 it was the talk of the show. Yes, it’s old news in 2018 but it’s something we could not neglect mentioning when talking about the new 5524R-001. The famous Geneva manufacture had a number of amazing years: Patek Philippe celebrated their 175th anniversary in 2014 with a very (and I mean very) strong lineup. 5270G or 5951P come to mind when I think of that year. One would think, as it normally is in any industry, that after such a strong year the next one would be a “decline” but not at Patek Philippe. While the 2015 line-up was not as strong as the previous years it did introduce us the 5524. The biggest “issue” many had with that watch was the pilot’s watch design. Notably, how the Zenith Type 20 GMT showed a striking resemblance to that Patek. Not to mention that was also a GMT. However, what many didn’t realize, is that Patek Philippe does have a history when it comes to military watches for pilots. 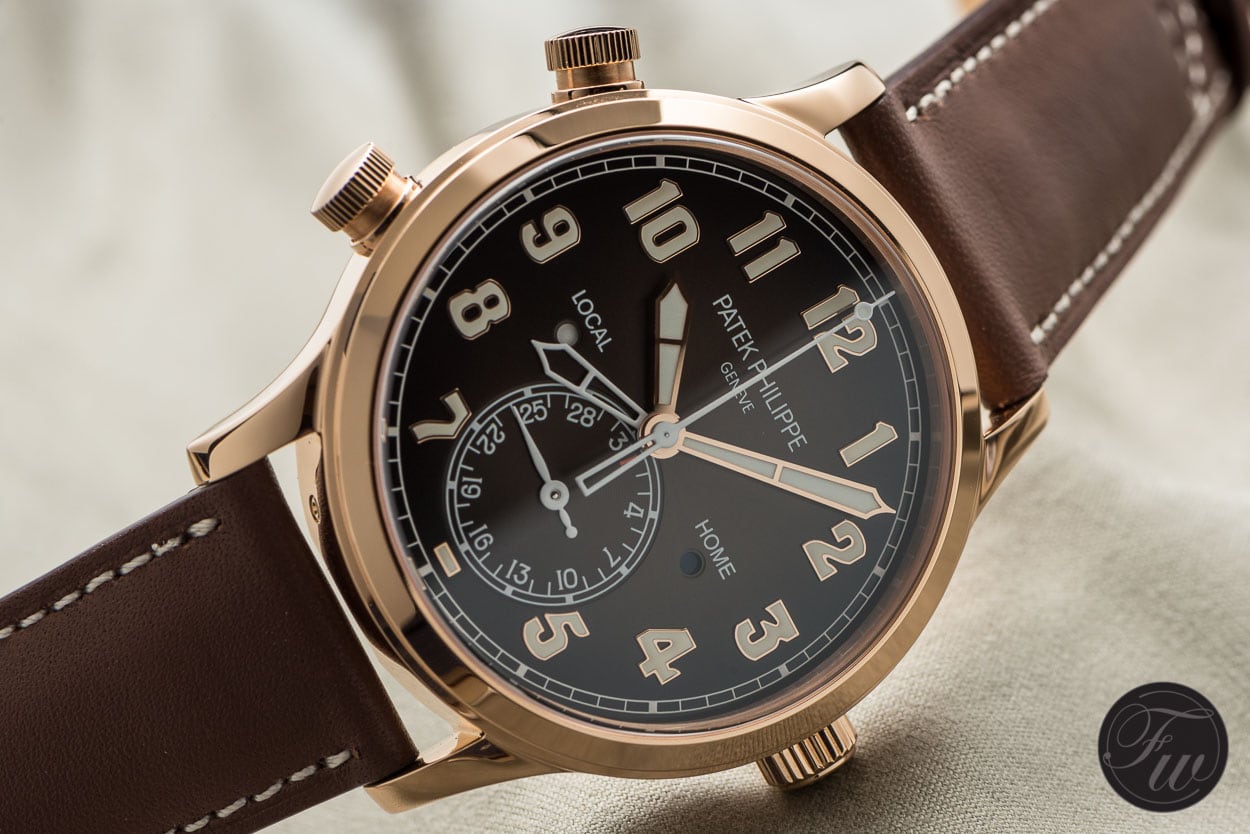 That was in 2015 but the 5524(R-001) made a return in 2018. Only this time it’s not a white but a rose gold case. The dial colour is also different. The 2015 model came with a blue dial. In 2018 the new 5524 has a matching brown dial to the gold case. As far as my personal taste goes, this model is a bit too much for me. I like the under-the-radar looks of the white gold version. As much as a 42mm Patek can go under the radar, of course. Still, the 5524R is a beautifully made timepiece from one of the most prestigious companies in the industry. We are going to have a closer look at the 5524R and sometimes draw a comparison between that and the 5524G. After all, they are both parts of the same model line. 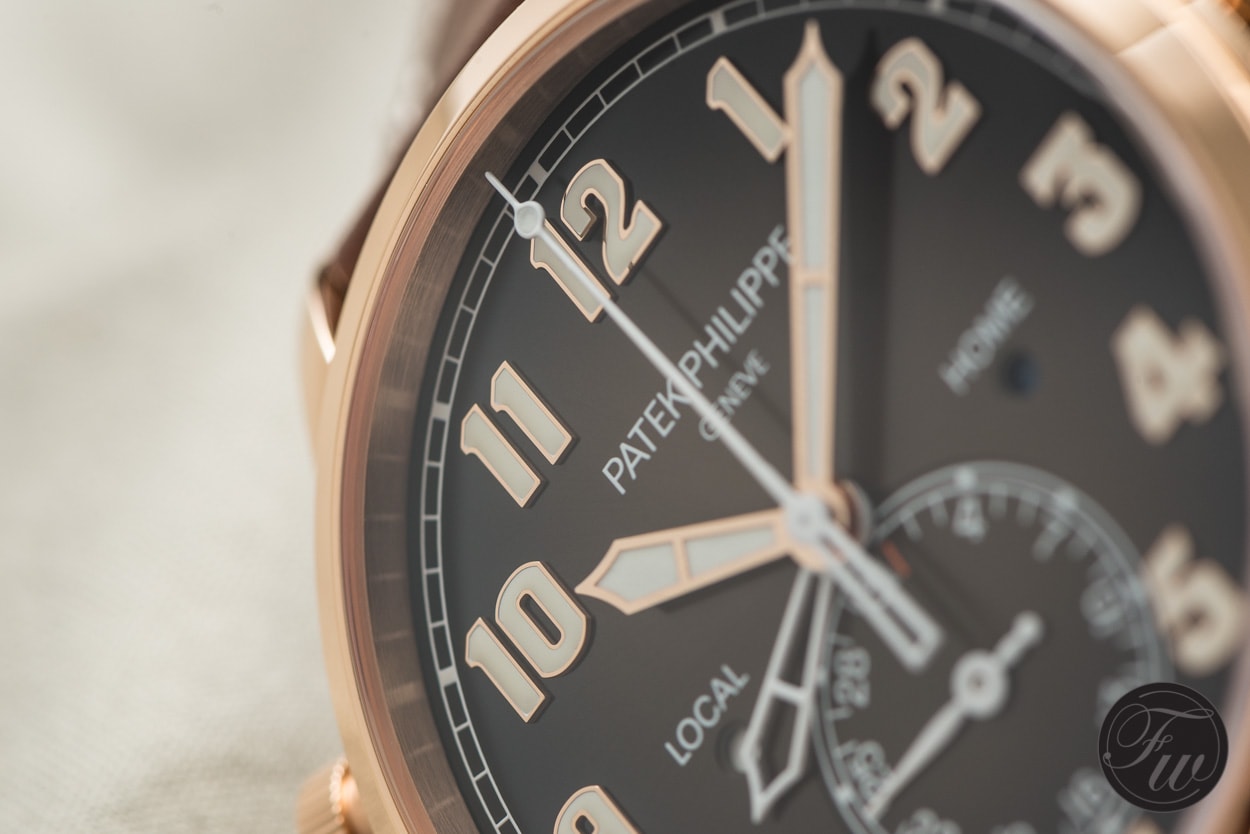 These are not my words but Patek Philippe’s. Truth be told the 5524 is not a small timepiece by any means. While the watch pays tribute to the 1930’s aeronautical pioneers the size is very contemporary at 42mm. The lug tip to lug tip length is a staggering 50.75mm with a 21mm strap. That is a big chunk of rose gold you’re sporting on your wrist. Speaking of gold, as I mentioned above the new 5524R is coming in rose gold. The deep rich colour is the result of the metal classification being 5N. That usually means the composition is of 75% gold, 20.5% copper and 4.5% silver. The ladies version of the 5524 is made of 4N gold (less copper and more silver, hence lighter colour). The case shape is simple, round with only the crown on the right and the 2 time-zone pushers on the left. 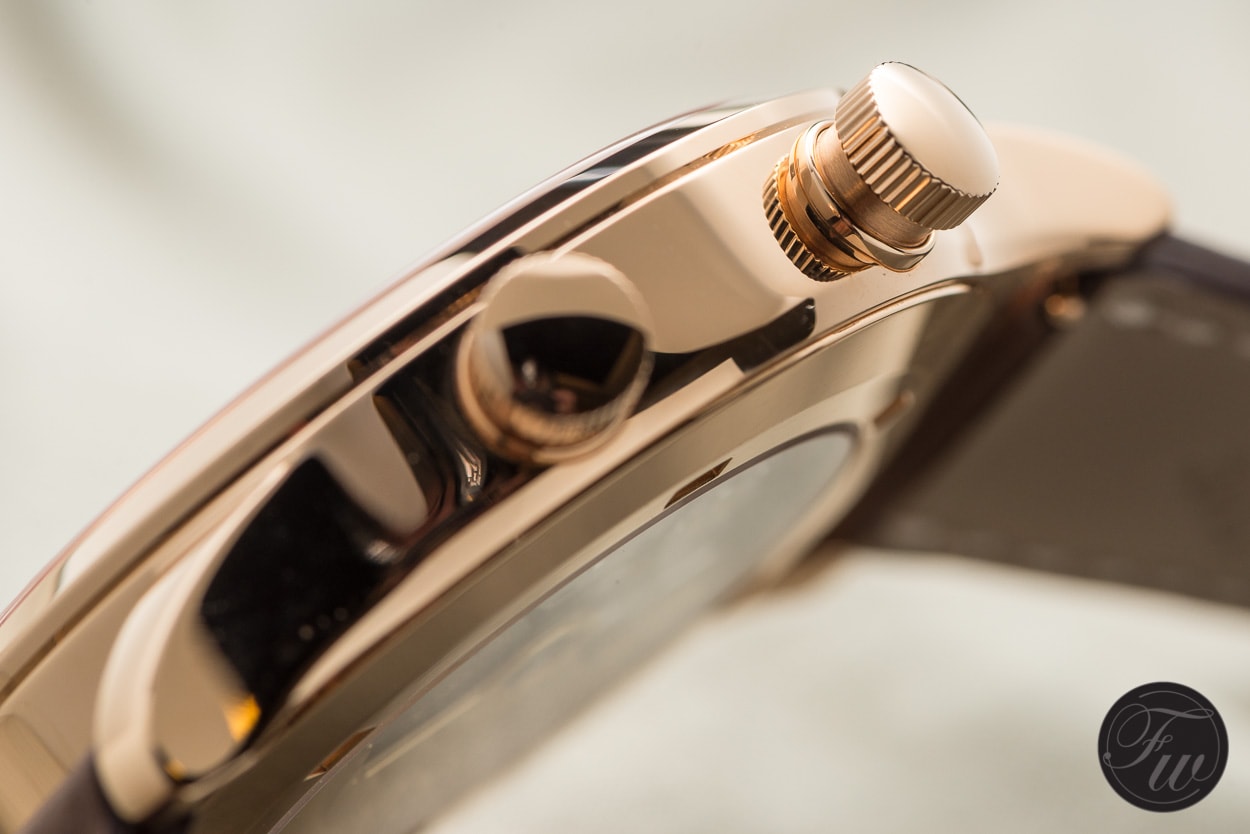 The crown has no crown guard only Patek’s logo and model line denominator, Calatrava cross. It is the only thing on the right side of the case. The pushers for the local time are on the left side, at 10 and 8 o’clock. The top pusher moves the local hand clockwise the bottom one sets the local time counter-clockwise. As you’d imagine since the pusher is large by pushing them accidentally, might change the local time. To prevent this, the pusher can be locked by a quarter turn clockwise. When the local time is set to a new date (from let’s say 10:15 pm to 2:15 am the next morning) the date sets automatically with it. If however, you need to adjust the date, you can do so by the corrector. You can find it between the 2 lower lugs, on the side of the case. 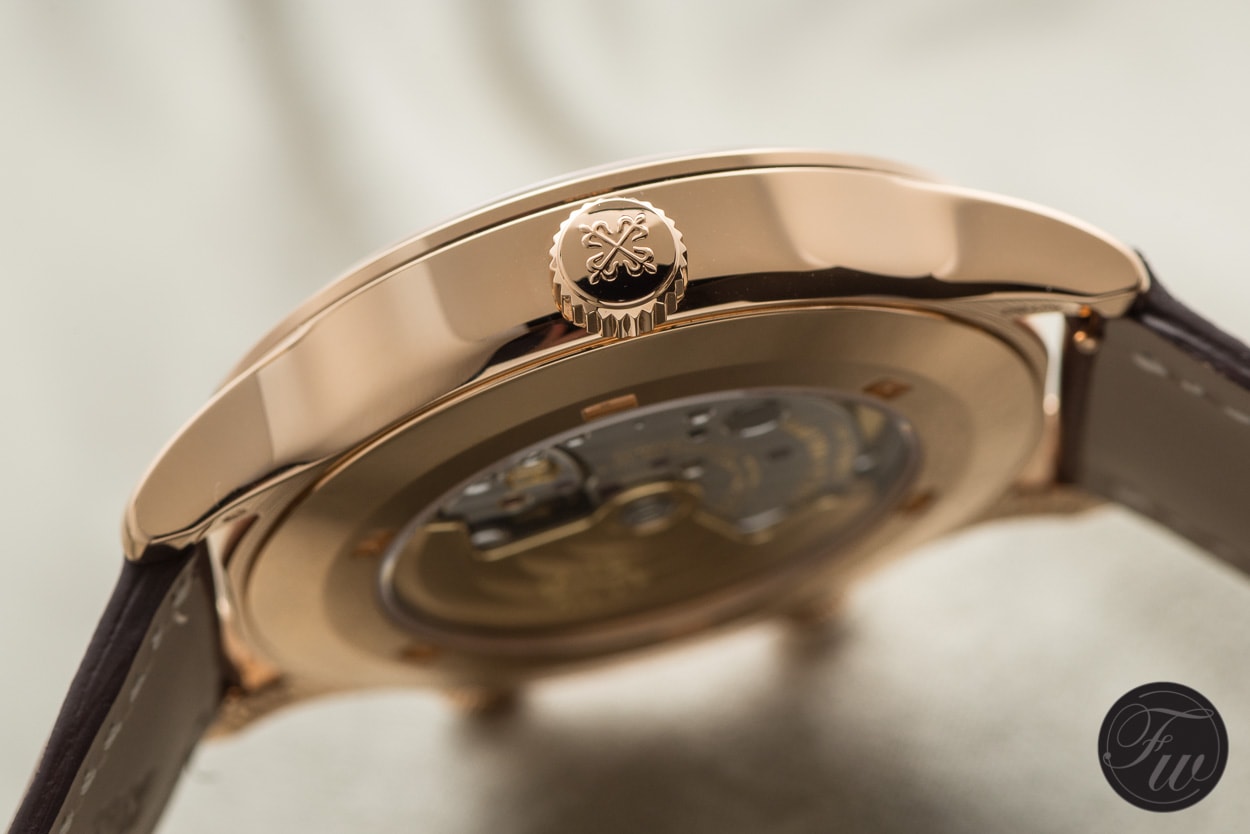 Through the sapphire crystal of the screw-down display case back, you can adore Patek Philippe’s highly decorated manufacture movement, the caliber 324 S C FUS. It is an automatic movement with two time zones (home and local), a pointer date and a day/night indicator for both on the dial. The 324 S C FUS has a 21K solid gold oscillating weight. The caliber consists of 294 parts. The power reserve is between 35 (min.) and 45 (max.) hours. The winding of the movement is unidirectional with 28,800 A/h and 29 jewels. The smart thing about the caliber is the uncoupling function. This means that when the local-time hand is set on the 5524R by pushing either pusher, an isolator disconnects the time-zone mechanism from the going train. This allows the watch to oscillate at a regular rate without any degradation of the amplitude. And then, of course, there’s the Patek Philippe Seal. 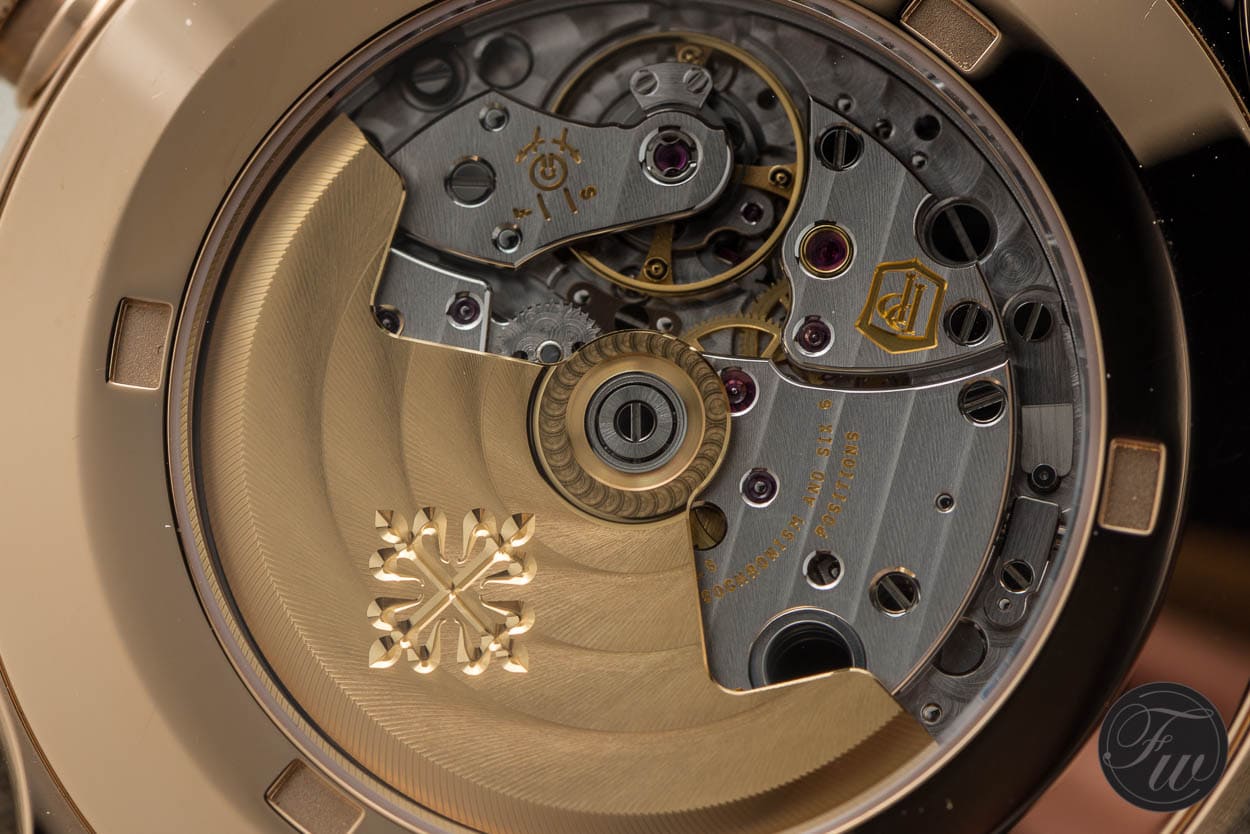 The dial on the 5524R-001 has a deep chocolate brown tone, that matches the rose gold case perfectly. It is brass with thick brown lacquering and sunburst finish. Every hand-applied Arabic numeral is as big as it gets. They are solid gold, carved out then filled up with Super-LumiNova. Thanks to the huge numerals and the contrast of white and brown the dial is easy to read and, while a lot is happening on it, not cluttered at all. Above the 6 o’clock is the subdial for the date, between 3 and 4 is the aperture for the AM/PM indicator of Home time (as written above it). The same indicator for the Local time is on the other side of the dial between 8 and 9. When you set the time forward or backwards with the date the AM/PM indicator also sets itself. 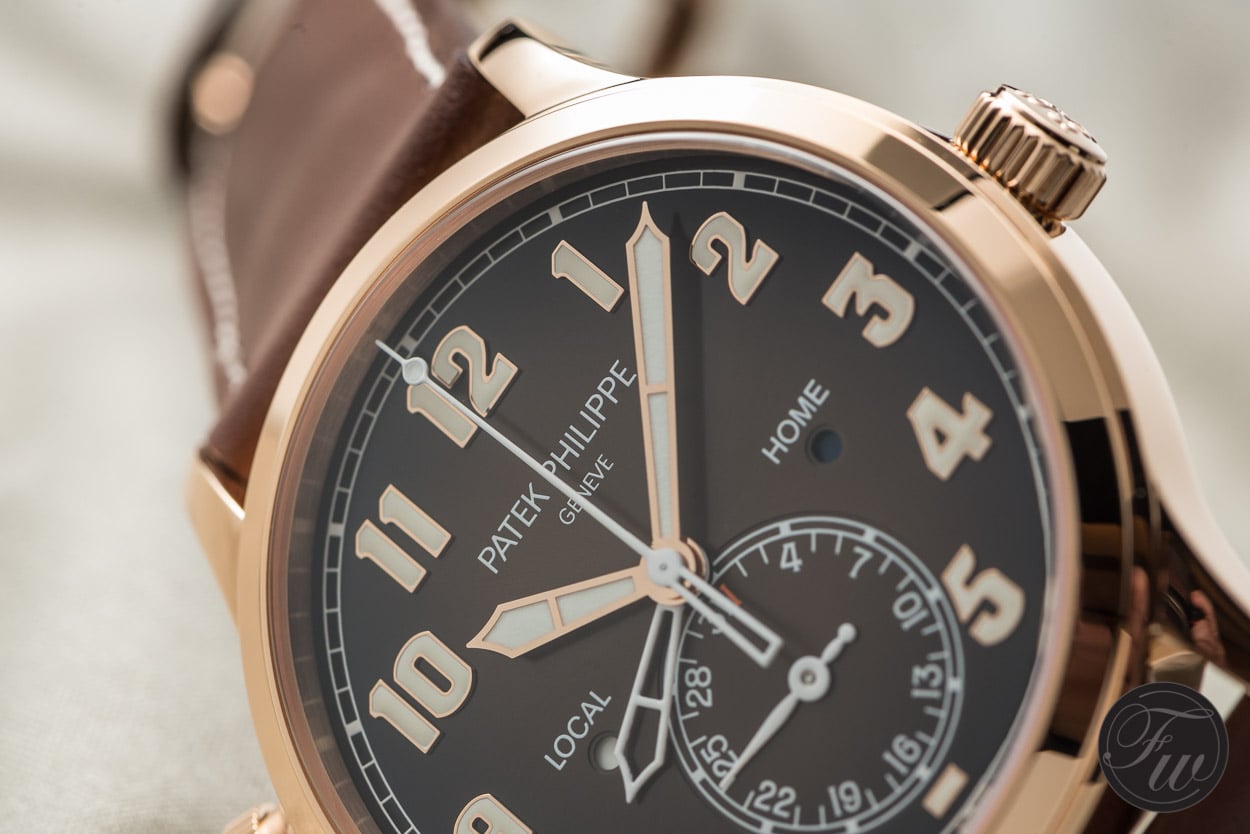 At first glance, the watch looks like a simple time only watch. Given that the local time is not set to a different zone as the home time. The home time hour hand is hidden under the blue hour hand which is the local time hand. When you push the adjuster, the blue hour hand starts to jump, one hour at a time. Underneath it appears a white skeleton hand still showing home time. That would be the hour hand for home time. All three hands are baton-shape. Though the minute and local time indicators are gold the home hour hand has a white lacquer cover. The same white lacquer is applied to the lollipop seconds hands. The dot at the tip of the lollipop hand helps the readability of the watch. Overall the 5524R-001’s dial is not your usual Patek Philippe design, but it’s a well thought out one. 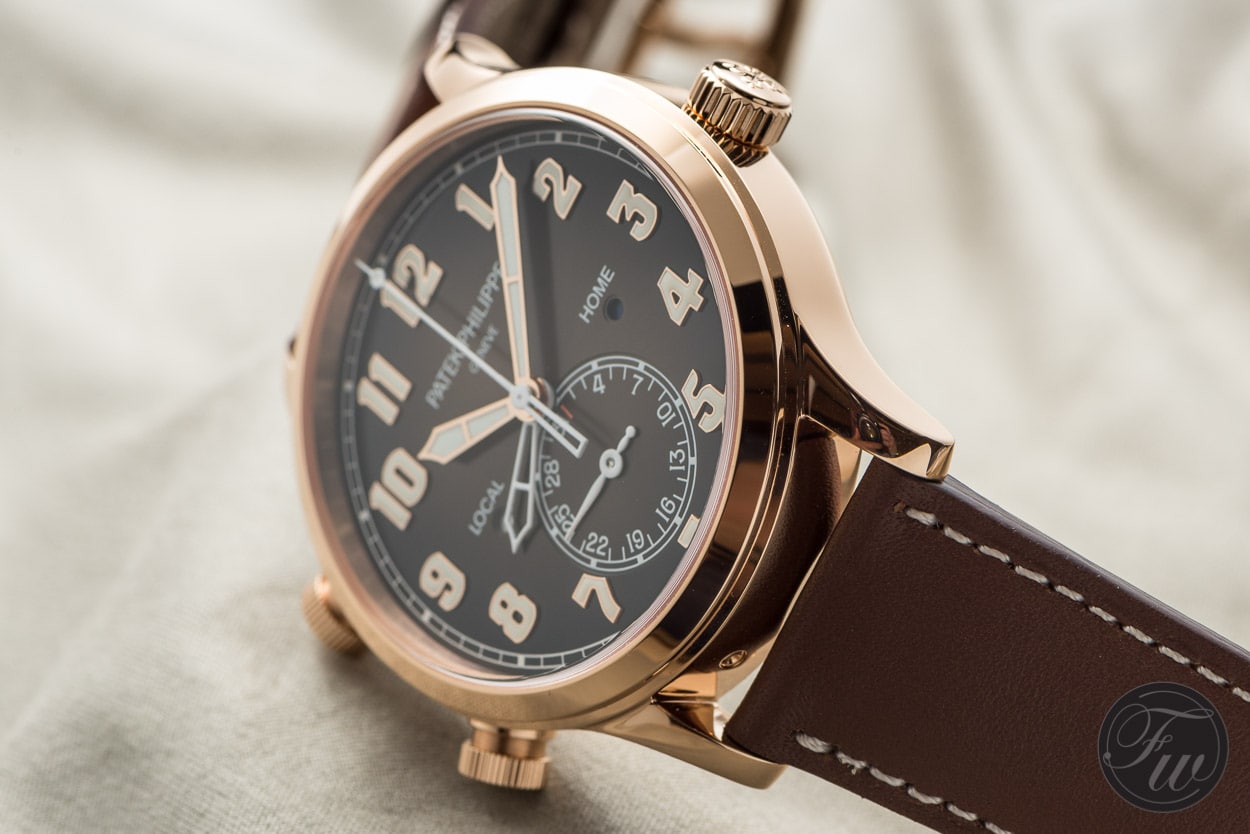 The 5524R is the type of watch that the more you look at the more you like it. It surely is nothing like any other Patek Philippe before. However, that might have been the case in 1976 when Gerald Genta penned the first drafts of the Nautilus onto a napkin (as the story goes). Three years after the first version came out and shook the watch world with its noticeable similarity to that aforementioned Zenith, the 5524 is still going strong. To some, the 5524(R or G) is a large and somewhat loud watch. Others say it is a perfect contemporary timepiece that caters for the bold young generation of Patek Philippe customers. I only know two blokes owning one; Ed Sheeran has the new 5524R. Our friend and fellow journalist, the Danish Dandy aka Kristian Haagen own the 5524G. Two watches, two generations, identical taste. 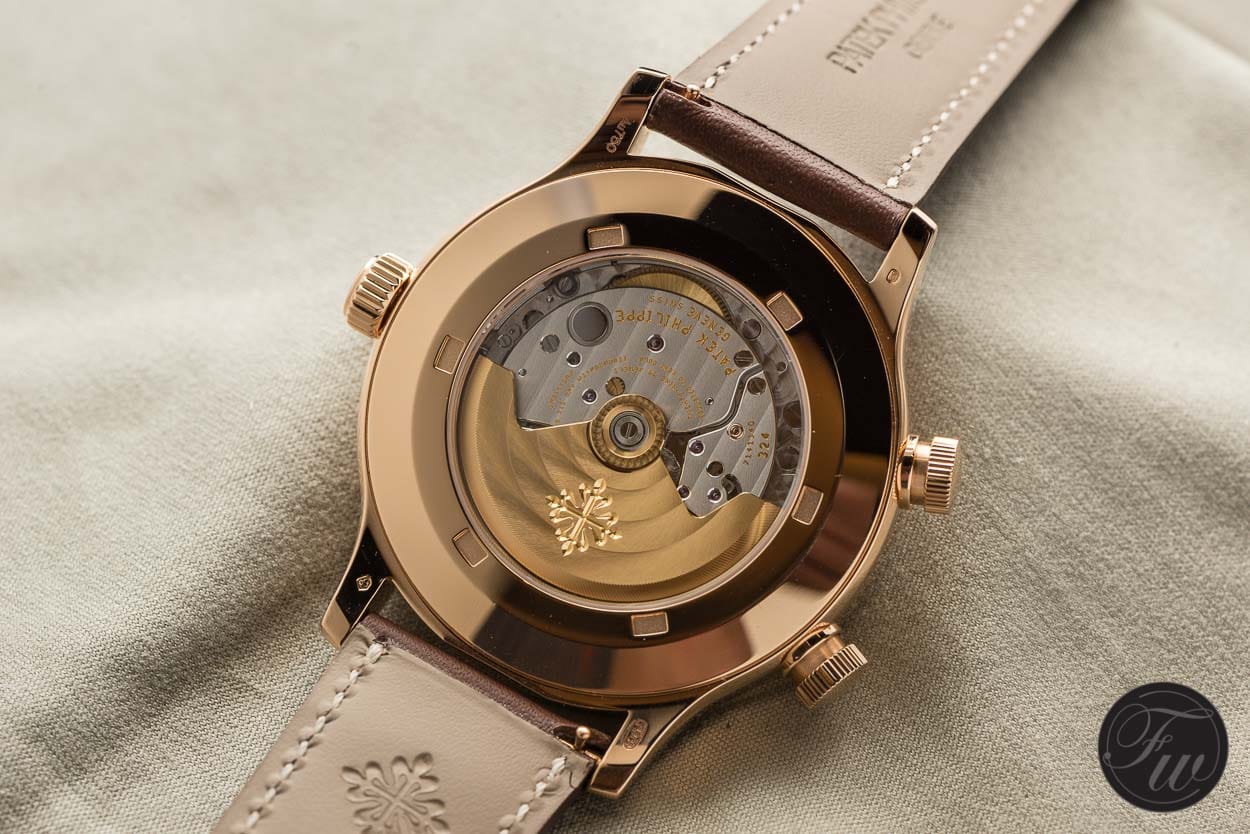 If you would like to check out this or any other Patek Philippe model, please visit their site, here.