We probably should have seen such zodiacal shenanigans coming...
Rob Nudds
comments 5
Share

Regardless of how much stock you put in the zodiacal cycle, it’s always interesting to find out in which year you were born and to see how closely the traits of that sign match up with your own. Coincidentally, I was born in the year of the Ox (back in 1985). This is, including the year I was born, the fourth time I’ve entered my own zodiacal period, which means I should prepare once more for a year of being reminded how stubborn I am (apparently). However, when researching the latest Wristmon from Konstantin Chaykin, I learned more about the zodiac than I bargained for…

So I’m pretty sure everyone and their dog has heard of the zodiac. I’m not expecting everyone to be able to rattle off all twelve animals without cheating, but I reckon each one would ring a bell if I listed them for you. Tiger? Check. Rooster? Check? Rat, horse, snake? I know you’ve heard of them before. But did you know that in addition to each year being the year of a certain animal, each year also harbors an elemental sign?

The year of the Metal Ox

As mentioned, I was born in ’85. That was actually the year of the Wood Ox. Subsequent years of the Ox in my lifetime have been 1997 (the year of the Fire Ox), and 2009 (the year of the Earth Ox). The next time the year of the Ox rolls around it will be 2033. That year will welcome the Water Ox to town. Following that, in 2045, the Wood Ox is scheduled to make its second appearance during my lifetime. By which point I will have reached (or be about to reach) 60 years of age. Upon realizing this, Grand Seiko’s 60-year anniversary celebrations suddenly made more sense to me.

What better way to celebrate such a momentous occasion than with a new Wristmon?

I’ve read reams and reams of Grand Seiko press releases this year. To be frank, I took the brand’s ascertain that anyone (or thing) that lived for 60 years on this Earth would have experienced a full rotation of the zodiac at face value. I just shrugged and accepted it. It is only now, having learned of the five elements involved in the zodiacal calendar that I get it.

The full rotation of the zodiac requires each animal to pass through each of the five elemental phases and return to the one with which it began. So while I’ve seen four Oxen thus far, this is the first time I’ve encountered a Metal Ox (as it surely is for most of us). What better way to celebrate such a momentous occasion than with a new Wristmon? Everyone’s favorite maestro of mechanical mirth, Konstantin Chaykin, has duly obliged. 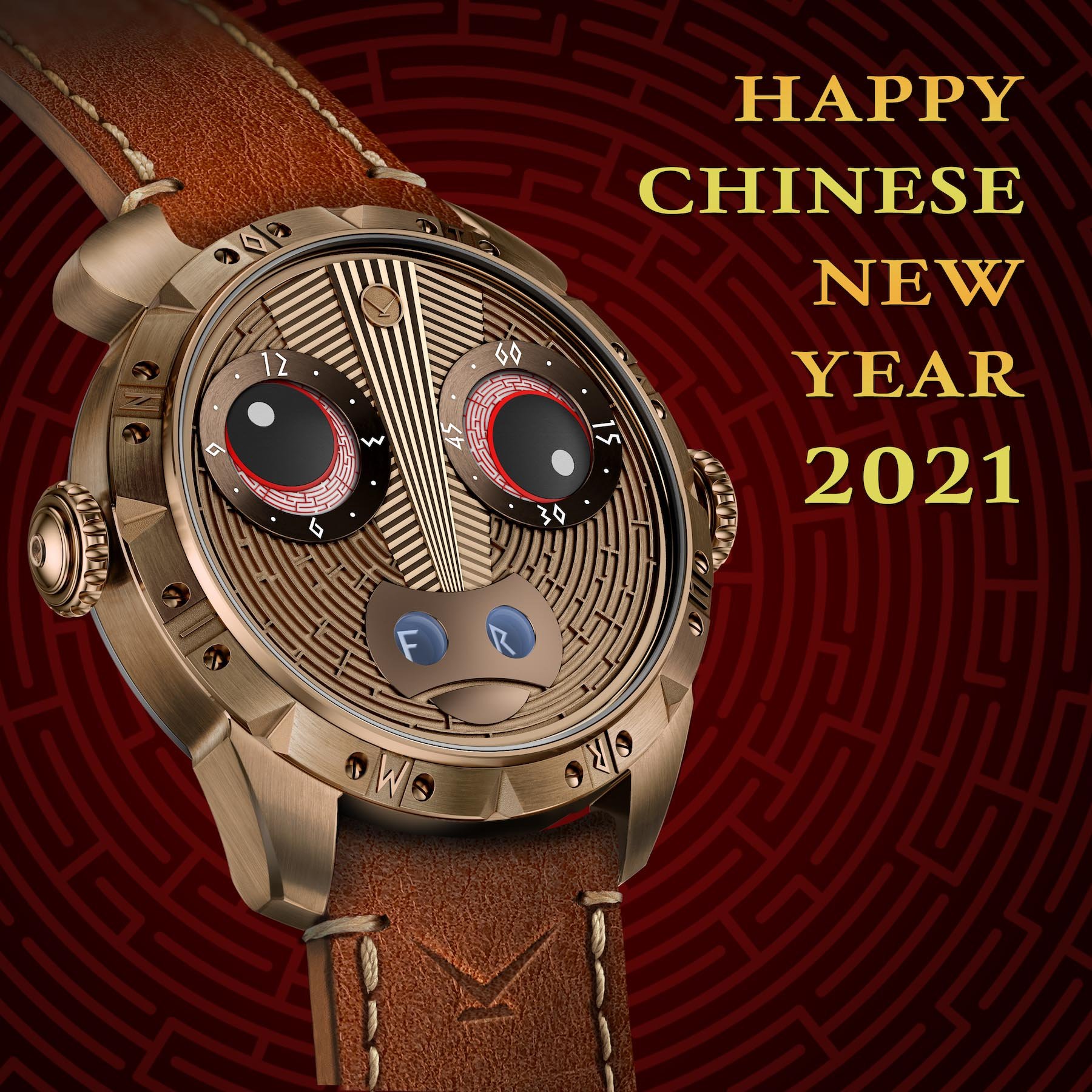 Honestly, while I’m prone to cynicism when it comes to any brand’s flowery justification for its latest watch, I enjoy the Wristmon series so much that I would happily swallow motivation as glib as “a slightly rainy Wednesday in Moscow” as reason enough to create a new entrant.

And while other brands might well be content to obliquely reference something as obscure as an extinct scent, or a particular type of grass, or the generational echo of a child’s laughter as it dully resonates against flock wallpaper as justification for its latest shade of blue, Konstantin Chaykin takes an idea by the scruff of its neck and wrings it for all it’s worth.

The year of the Ox, you say? Heck, why not. Forget about Bull-head chronographs (too obvious). Forget about cowhide straps (too commonplace). Don’t even raise the issue of movement bridges carved from bovine hooves (I believe Moser has already patented this idea). No, why not follow up on 2019’s year of the Pig and 2020’s year of the Rat (who could forget the terrifying Mouse King) and create an entirely custom Wristmon based on a Bull.

I mean, it seems obvious in retrospect…

More than just a pretty face

The Wristmon series is famous throughout the industry. It is joyful. It is bonkers. Happily, it is one of the most well-received gambles in recent memory. Part of its success is down to the movement module KC slapped on top of an otherwise pedestrian caliber to create the now-famous visage. Previously, all Wristmon models have worked in the same way. The right eye (on the left-hand side as we look at it) indicated the hours. The left eye indicated the minutes. And, most intriguingly perhaps, the phase of the moon was indicated via the Wristmon’s tongue.

With this edition, however, Konstantin has brought to life a new calendar complication. Instead of the tongue, we can now be expected to glean the requisite info from the…nostrils…

Next-level luxury, or what? 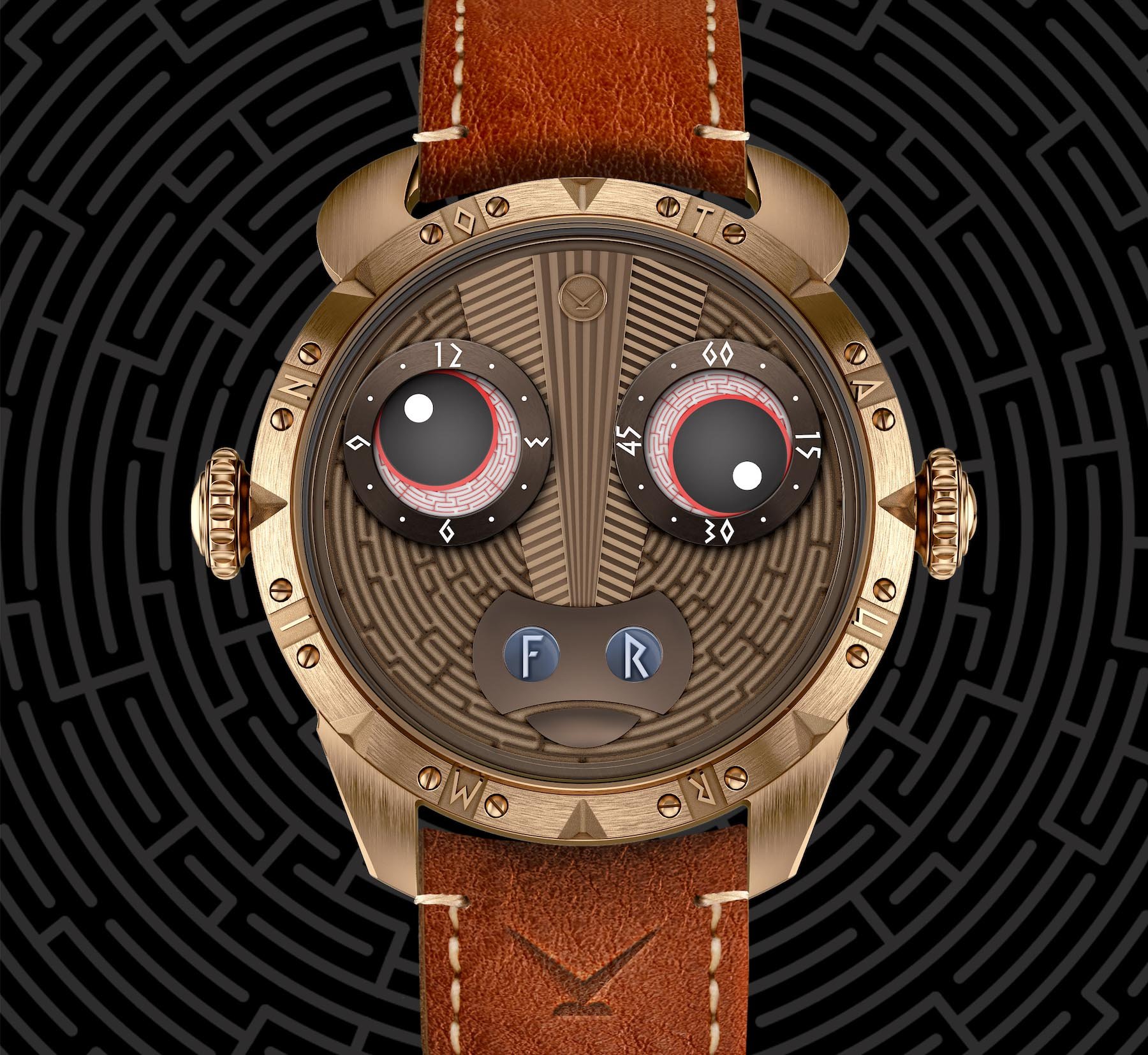 A fusion of beliefs

Chaykin’s visions are always complex. His mind clearly works differently. Yes, he is indisputably one of his generation’s most talented horologists. His earlier works put that beyond doubt. But in his later career, his flair as an artist has come to the fore.

This bullish Wristmon was inspired by the Chinese Zodiac, yes, but also by the myth of the bloodthirsty Minotaur, master of the legendary labyrinth of Crete. The Labyrinthine pattern has been integrated into the dial. And, truth be told, the yearly sacrifice demanded by the Minotaur (seven boys and seven girls) is what first put the idea of the double-day indicator into that endlessly creative mind.

This isn’t the first time Chaykin has combined mythologies in his work. Last year’s Mouse King was also dually inspired by the year of the Rat and a character from Hoffmann’s fairy tale The Nutcracker and the Mouse King. Further back, his Carpe Diem watch, combined the ancient Greek myth of Chronos, the Father of Time, with Vanitas — the genre of allegorical still lifes incredibly popular in the Netherlands at the beginning of the 17th century. 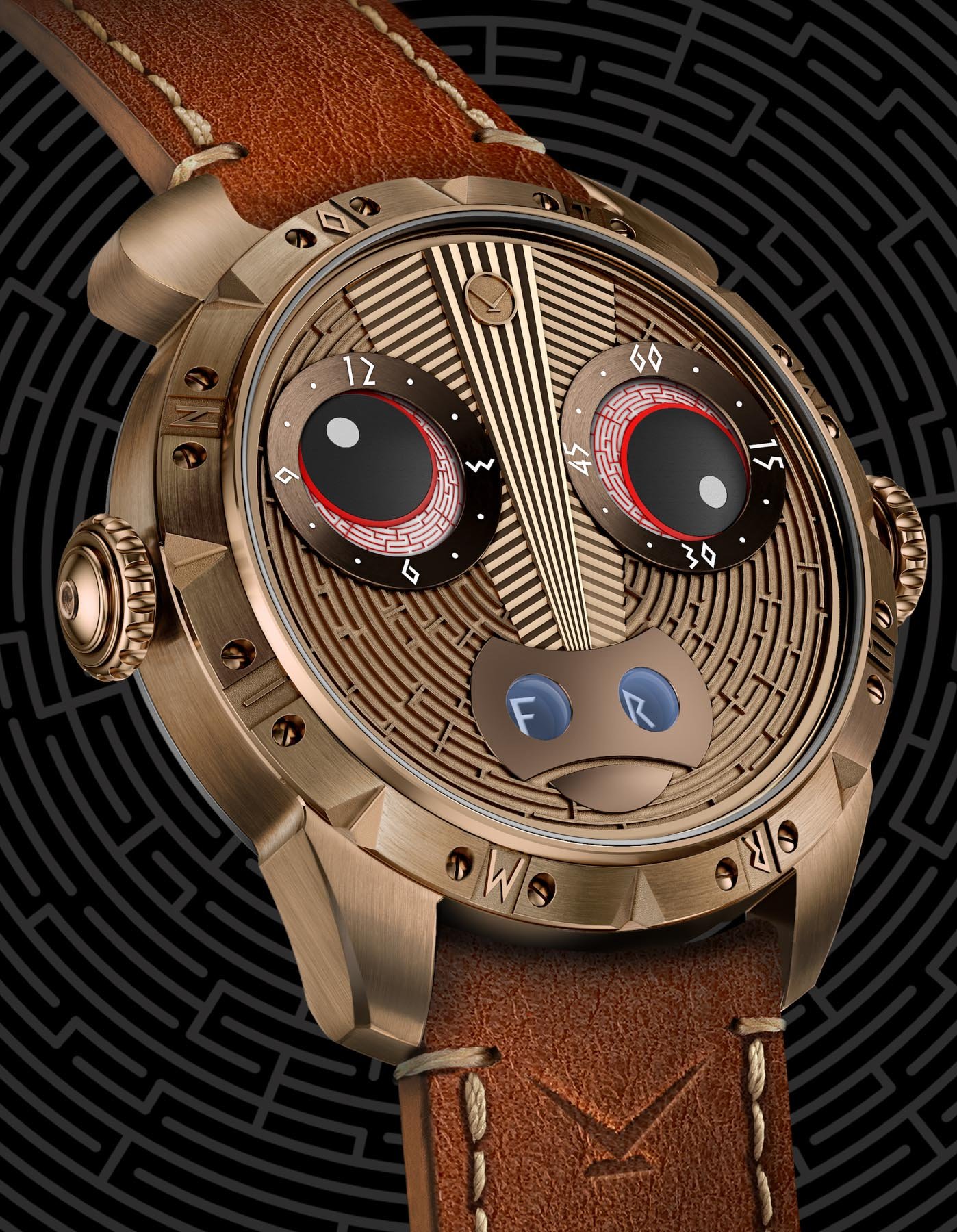 The case of the latest Wristmon is iron bronze. The 12 o’clock lugs are styled like horns in the same way last year’s Mouse King’s were styled like ears. The diameter of this one is 42mm and the thickness a palatable 13mm. As always, the dial display looks odd due to its proximity to the sapphire crystal’s underside — look ma, no hands!

The base caliber in question here is the Vaucher VMF 3002, a solid, 4Hz Swiss foundation upon which KC has worked his magic. The day discs are made from two different materials (bronze and silver). They are adjusted by the Minotaur’s left “ear” crown, while the right-hand crown sets the time. This is a reversion to the original Wristmon set-up, which was shelved for last year’s Mouse King. Given the fact this piece is designed to pique the interest of Chinese customers, it is perhaps unsurprising that the limitation has been set at eight pieces (eight is a lucky number in China, indicating prosperity). Learn more on Konstantin’s official site.