How good is the Tissot PRX really? Well, after writing about and praising the watch multiple times, I decided to buy the PRX Powermatic 80. Every time I was able to put one on my wrist or simply saw one in the wild, the watch impressed me a lot. As such, I decided to delay my purchase of the current Moonwatch a bit and put my money where my mouth was with the PRX. With a month-long trip to the United States in view, it was the perfect opportunity to find out how good the watch actually is.  Now, after a solid five weeks of wrist time, I can say that the PRX is nothing short of impressive.

For my month-long trip to North Carolina to visit my girlfriend, I decided that the Tissot PRX Powermatic 80 was not going to be the only watch I would take. With a four-day trip to the beach planned, I figured that a dive watch would be the perfect second choice. And as I usually rotate my watches quite a bit, I thought my first-generation Seiko Sumo SBDC001 would be a great companion to the PRX. I’d bring two differently styled watches so I could mix things up over the course of four weeks. Well, that’s not exactly what happened… 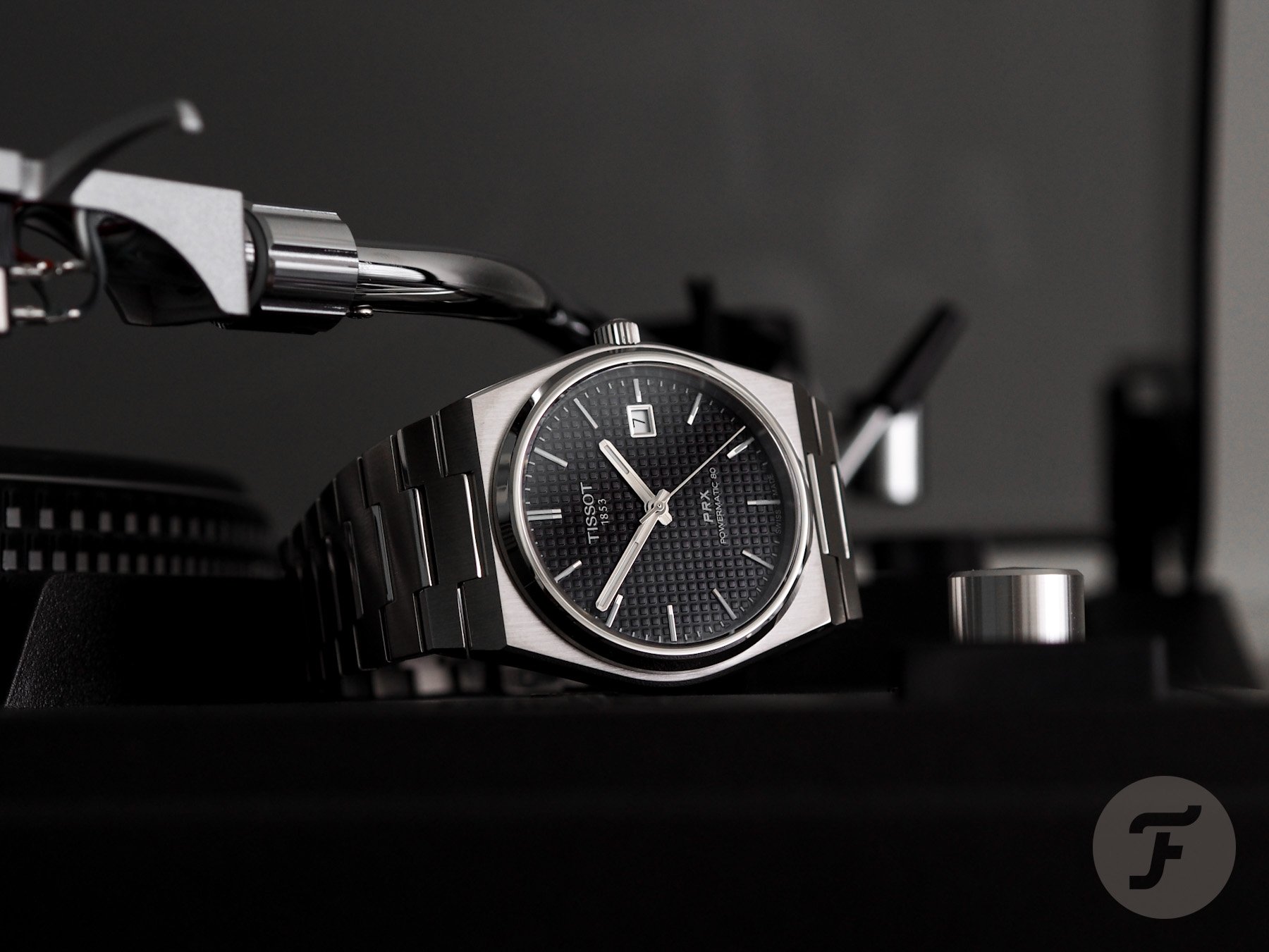 Impressions of the Tissot PRX Powermatic 80

If you read the Sunday Morning Showdown that Nacho and I did on the Tissot PRX versus the Citizen NJ0150, you already know what happened. I ended up wearing the PRX religiously for almost four weeks straight. At first thought, that makes sense. The watch is still fresh and new to me, so there is still a certain natural curiosity — the “honeymoon period”. In part, that turned out to be true. But there was more to the magic of why it was hard to take off my wrist. The watch is just ridiculously good. And I don’t mean that with its price in mind. No, Tissot has come up with a watch that looks seriously impressive, is very reliable, and is a joy to wear every day, regardless of its price — something Lex also concluded in his review of the watch. 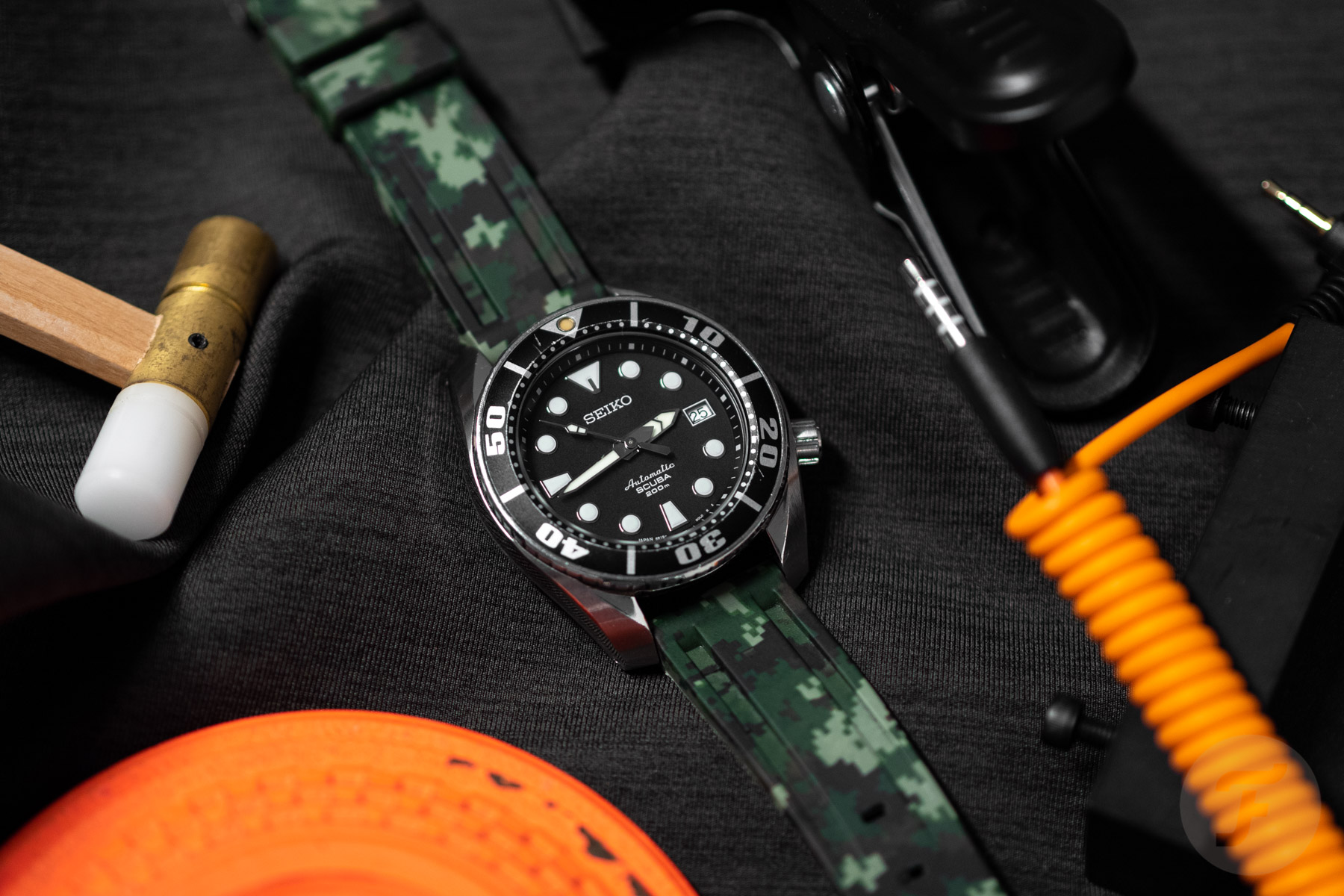 Putting price back into the equation makes the overall impact even more impressive. At the Fratello office, we get watches in a string of different price brackets sent in for review. We have the privilege of experiencing watches all over the price spectrum. But simply stating that the PRX is able to go up against watches double its €695 retail price would be a huge understatement. In terms of overall appeal and quality, the watch easily beats a lot of watches up to €2K. So that would be three times its actual price. While price is definitely a big factor in the joy of buying a PRX, for me, owning it is about other things. I love the small details that make the watch such a joy to wear. On top of that, the PRX just has such a grand presence. It’s why my beloved Sumo had to take a humble back seat during my trip to the US. 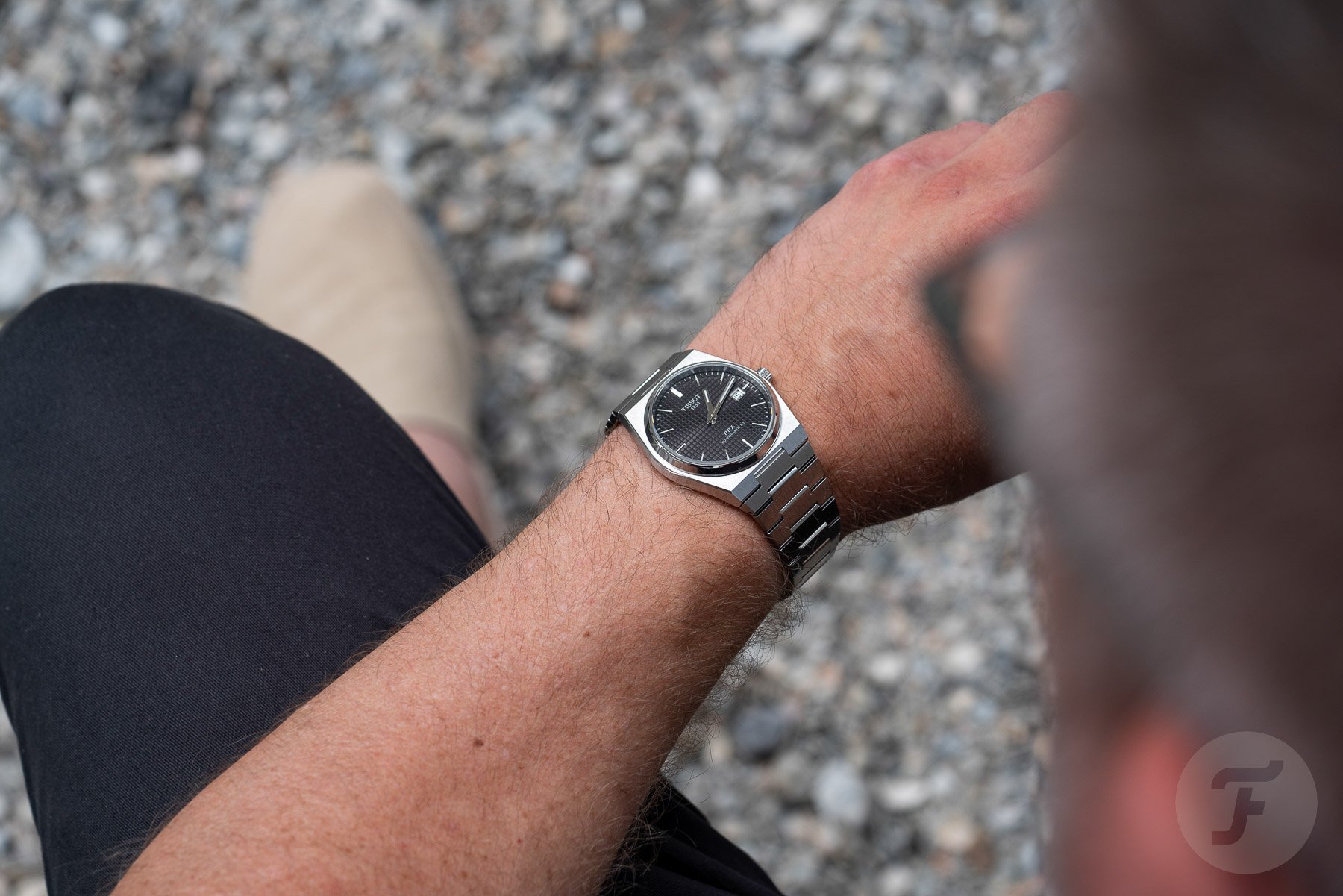 But that’s not to say it has been smooth sailing from the start with the PRX. The first immediate challenge I had to conquer was sizing the bracelet. I really dislike when a modern luxury sports watch with an integrated bracelet is too loose on the wrist. It just looks and feels off. When Fratello’s own Gerard and I were trying to find the right size for me, we ended up with one option being slightly too tight, while adding a half link was just a smidgen too loose. Knowing that I would be going to a hot and very humid climate, the latter option seemed like the way to go. In the end, it turned out to be a great choice. But in all honesty, a micro-adjustment option would be a welcome addition. 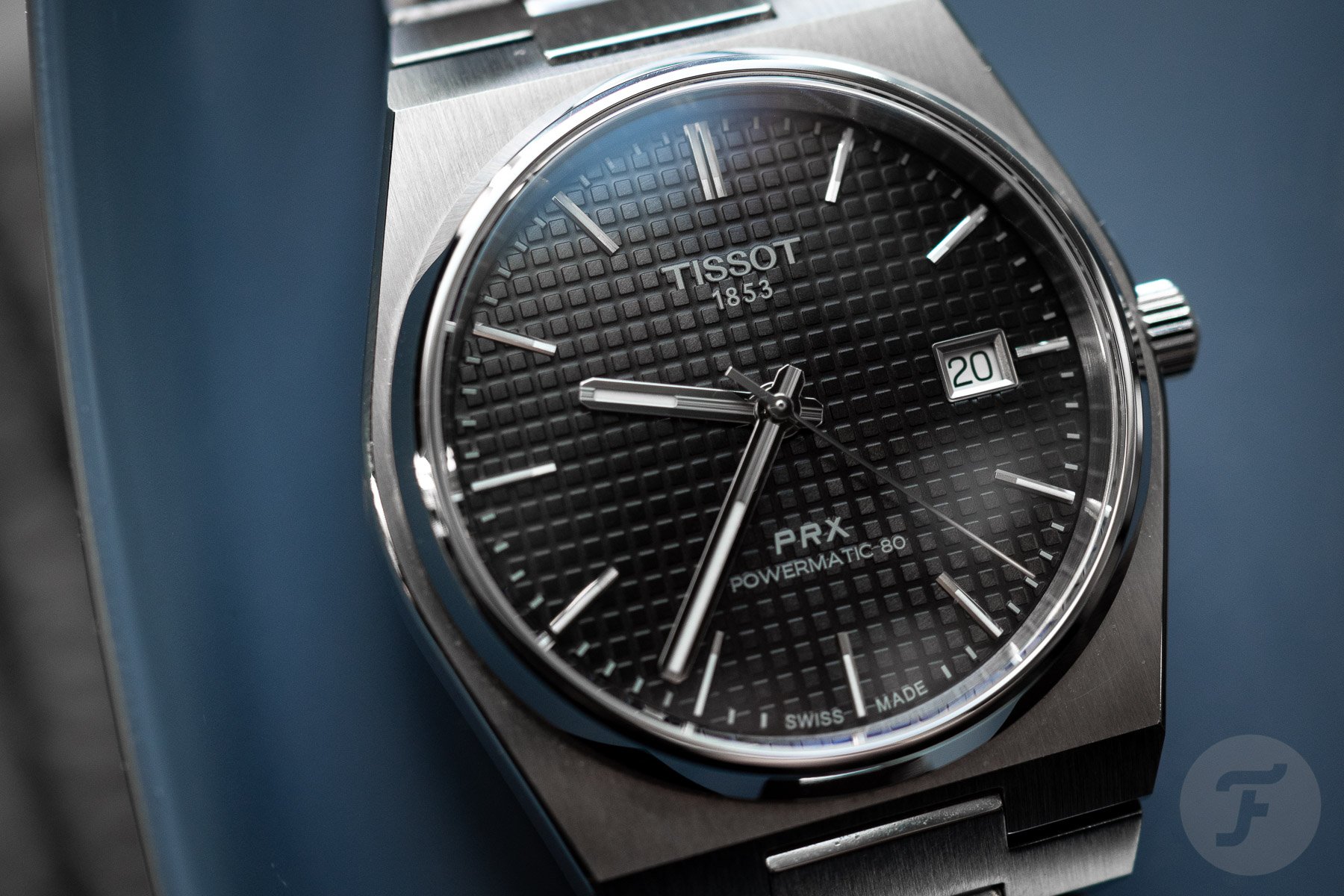 Once on the wrist, the watch is simply impressive. The first thing that stands out was another element that I had initial doubts about. The dial pattern that Tissot chose to use reminds me a lot of the Royal Oak’s Tapisserie dials. However, I must say that I like the refinement of this dial in comparison to the sunburst dials that Tissot used for the quartz PRX models. And in reality, the worry of being reminded of a Royal Oak turned out to be completely unjustified. Once I started wearing the PRX Powermatic 80, it quickly became a detail in the overall aesthetic that fit perfectly. It adds depth and refinement that is really easy to embrace as part of the PRX’s identity. 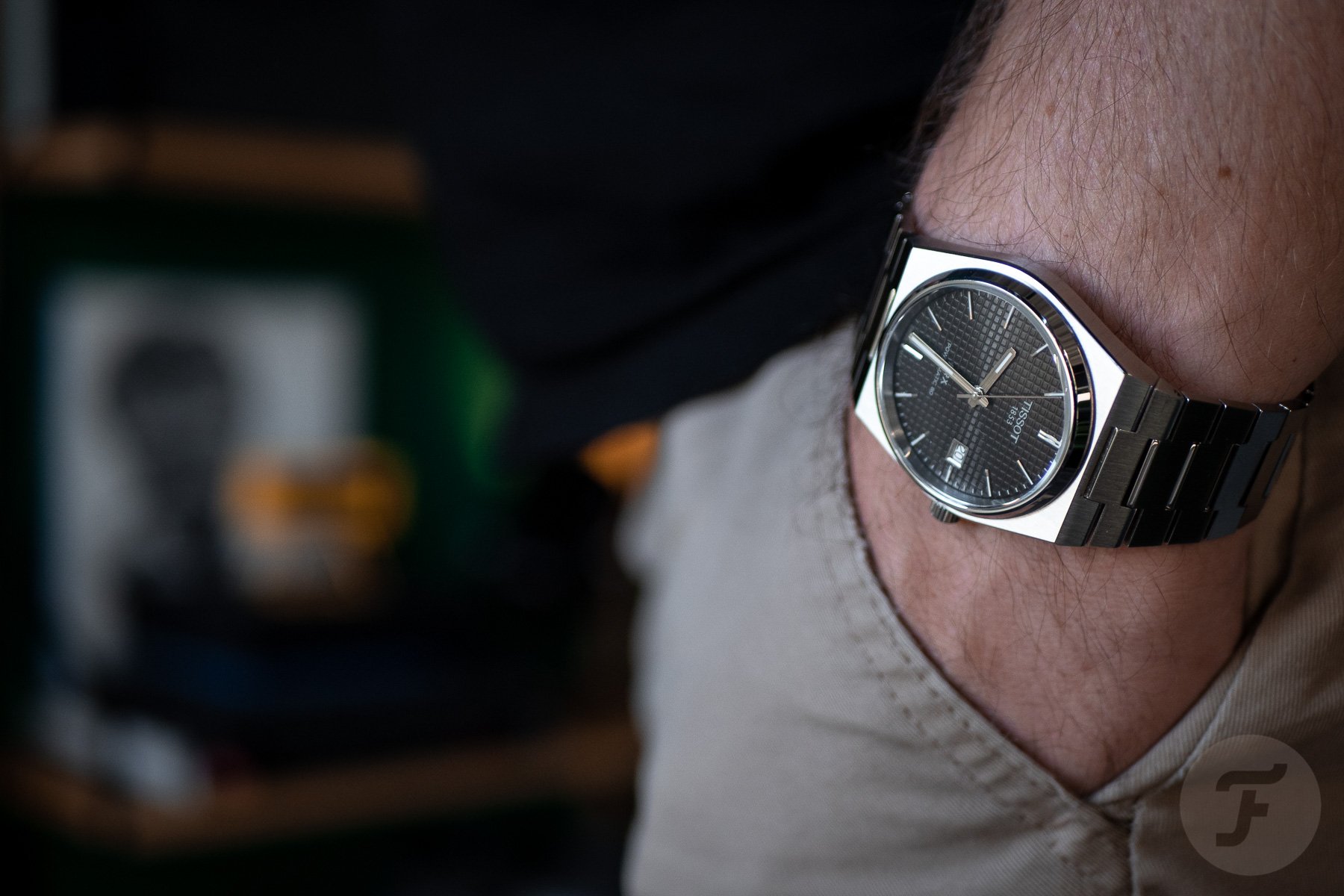 A month of wearing the PRX Powermatic 80

With watches, first impressions are always crucial, and the immediate reaction after putting the PRX on my wrist was that it was incredibly comfortable. In combination with the integrated bracelet, the 40mm case size makes it a joy to wear. The 10.9mm-thick case with its relatively slim profile sits comfortably while the bracelet gently hugs the wrist. And after wearing the watch for a month straight, I can say that lot of the magic of the PRX is in the bracelet. In the design, execution, and even the finish, it’s up to a level far beyond what competitors manage to achieve. 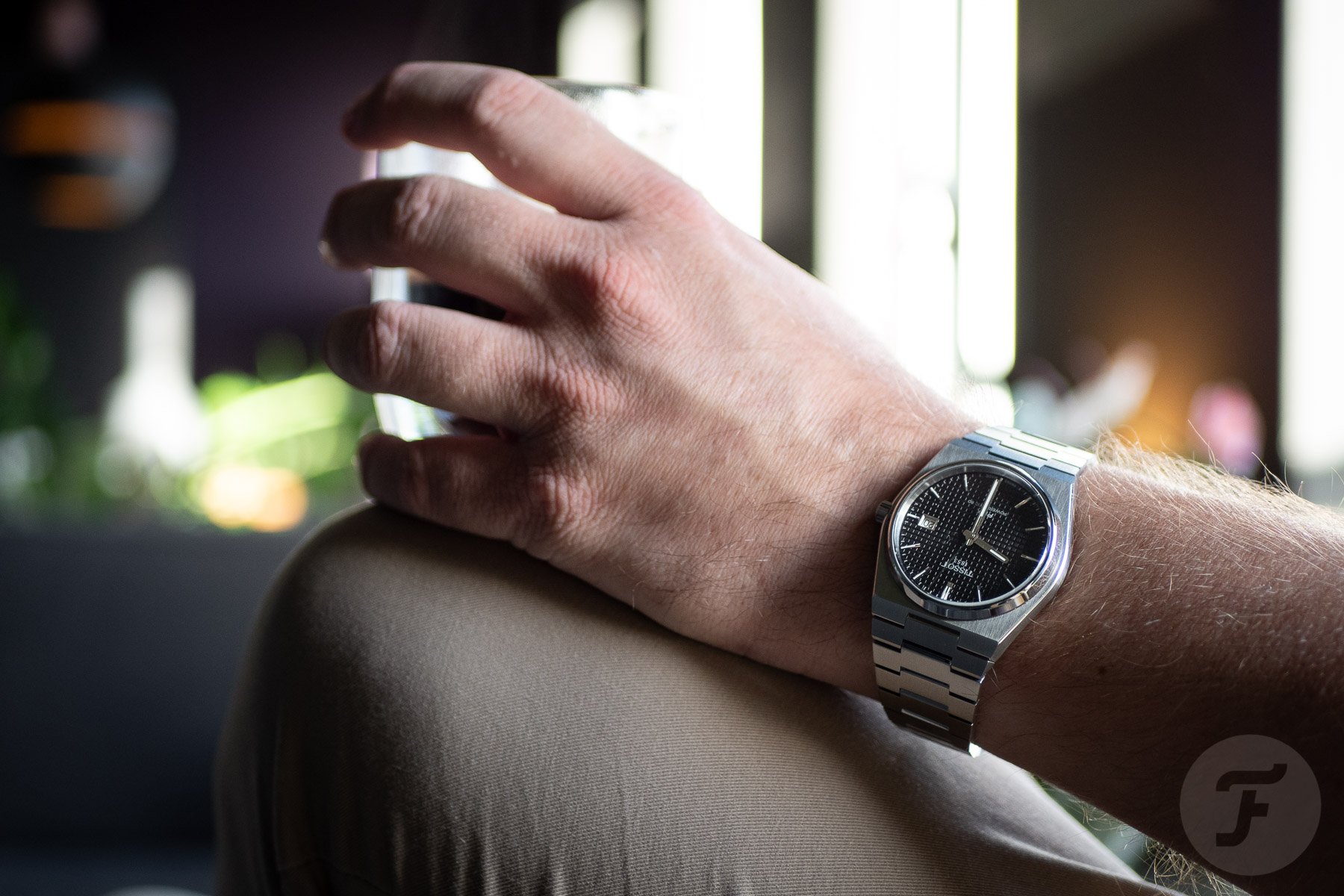 It all starts with the design. Tissot managed to create something that feels familiar without having an obvious influence. The design of the links in combination with the solid overall construction gives a feeling of great quality. As most of you will know, bracelets are often the Achilles heel of watches in the sub-€1K price range. But Tissot proves that creating a great quality bracelet that looks impressive is definitely possible for affordable watches. The overall feel is very solid, and in combination with the great folding clasp, it makes for a bracelet that sets a great standard for other brands to follow, hopefully. 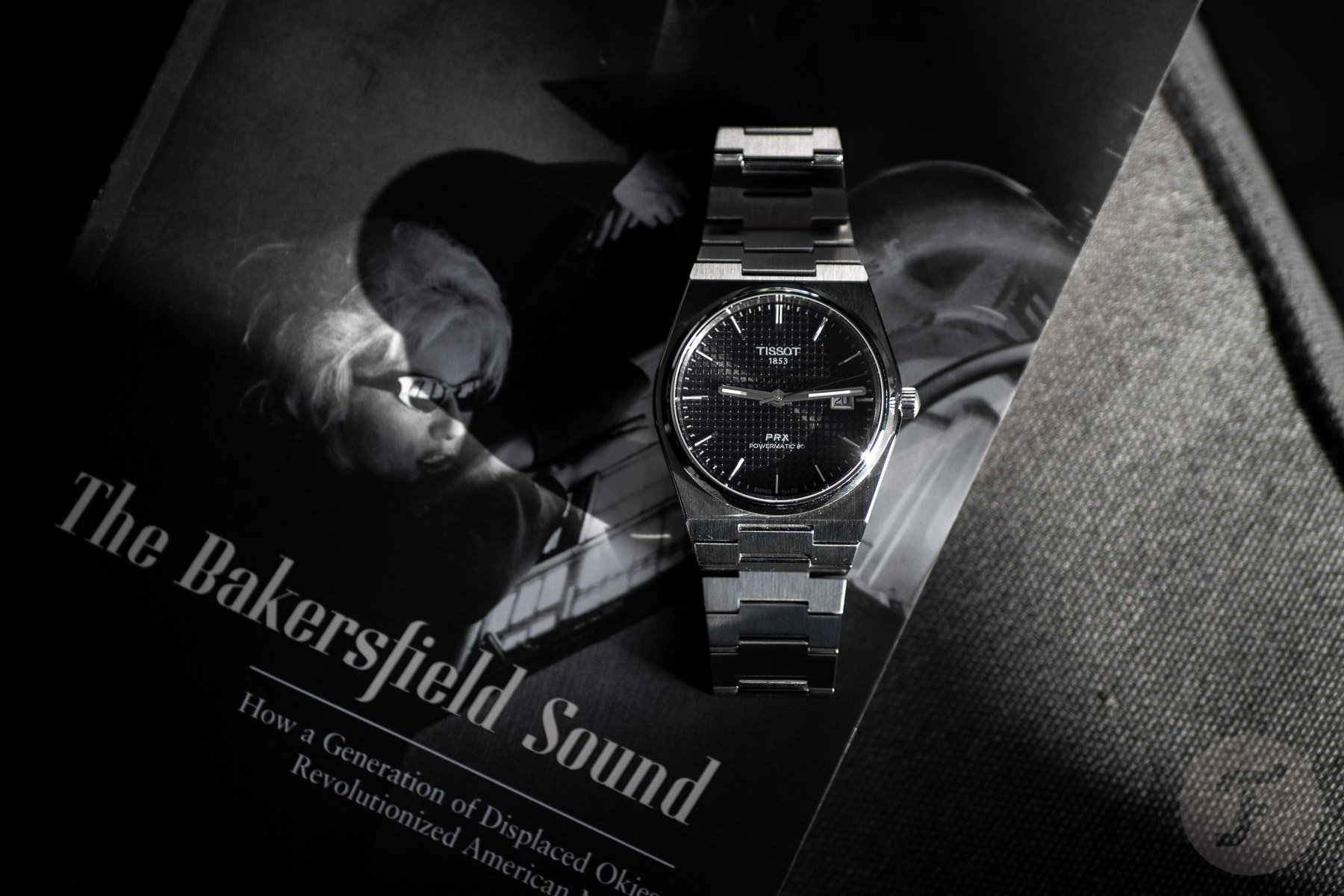 It’s all in the little details

For me, a sign that a watch is working its way into my heart is the fact that I start loving the not-so-obvious things about it. Sometimes these are quirks or areas with great attention to detail, and sometimes they are a combination of both. A great example is the placement of the date window. I remember reading in the comments under our Sunday Morning Showdown clash that the movement is too small for the watch, and as a result, the date window is too far away from the perimeter of the dial. This is something that I passionately disagree with. I absolutely love what the Tissot designers did by connecting the date window with the 3 o’clock marker. As a result, the placement of the date window doesn’t feel weird at all. Rather, I started loving it as it grabs your attention when needed but is never an unwanted nuisance. 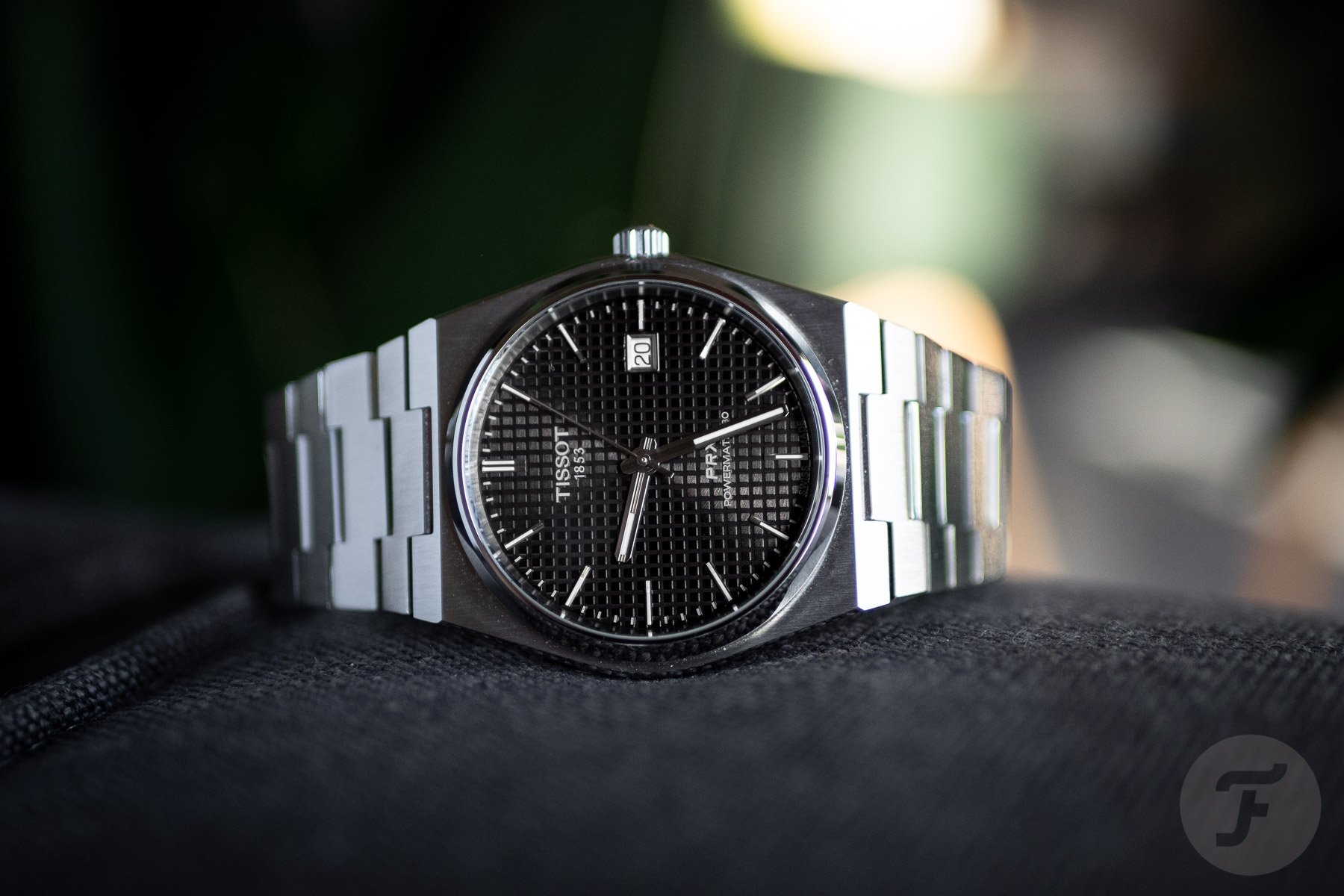 Another element that I love is the handset. To some, the hour and minute hands might seem awkward at first glance. They are substantially wider than the hour markers and could even be called “oversized” in relation to the other dial elements. But I adore these bigger hands because they give the face of the watch just the right amount of character. Slimmer hands would create perfect proportions but would also result in a much more boring watch. On top of that, they have room for lume, so you can, theoretically, read the time in the dark. 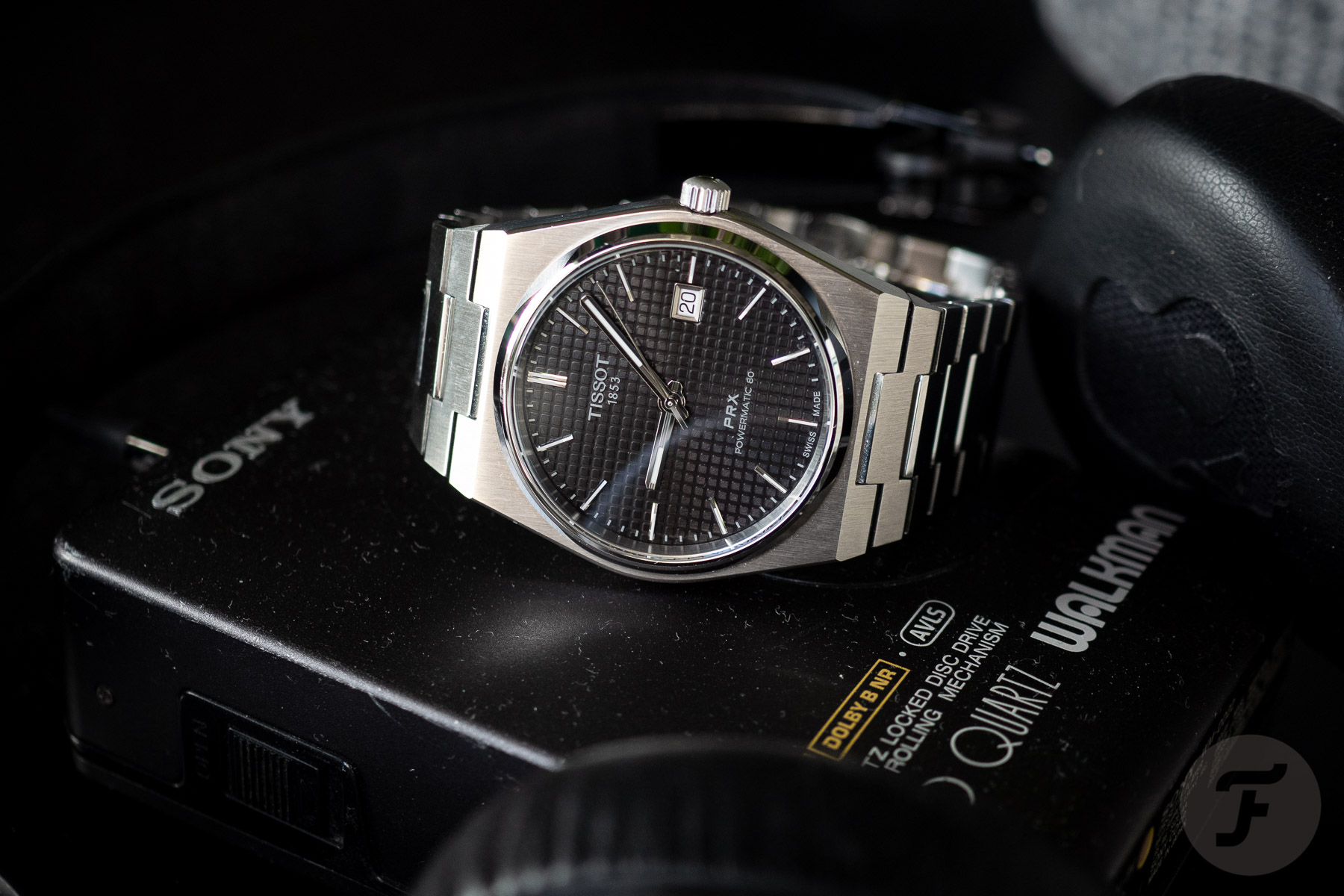 An affordable watch with a luxury aura

And it doesn’t stop there. The one detail that I absolutely love the most about the bracelet is the finish of the individual links. They have a brushed overall finish, but the short edges in between the links have a polished finish. As a result, when I wear the watch, my eyes are constantly drawn to the little shimmers that stand out when the light hits them. It’s a great detail that shows the care and attention that Tissot put into creating the watch. It gives the PRX a luxury feel that not a lot of watches in this price category have. 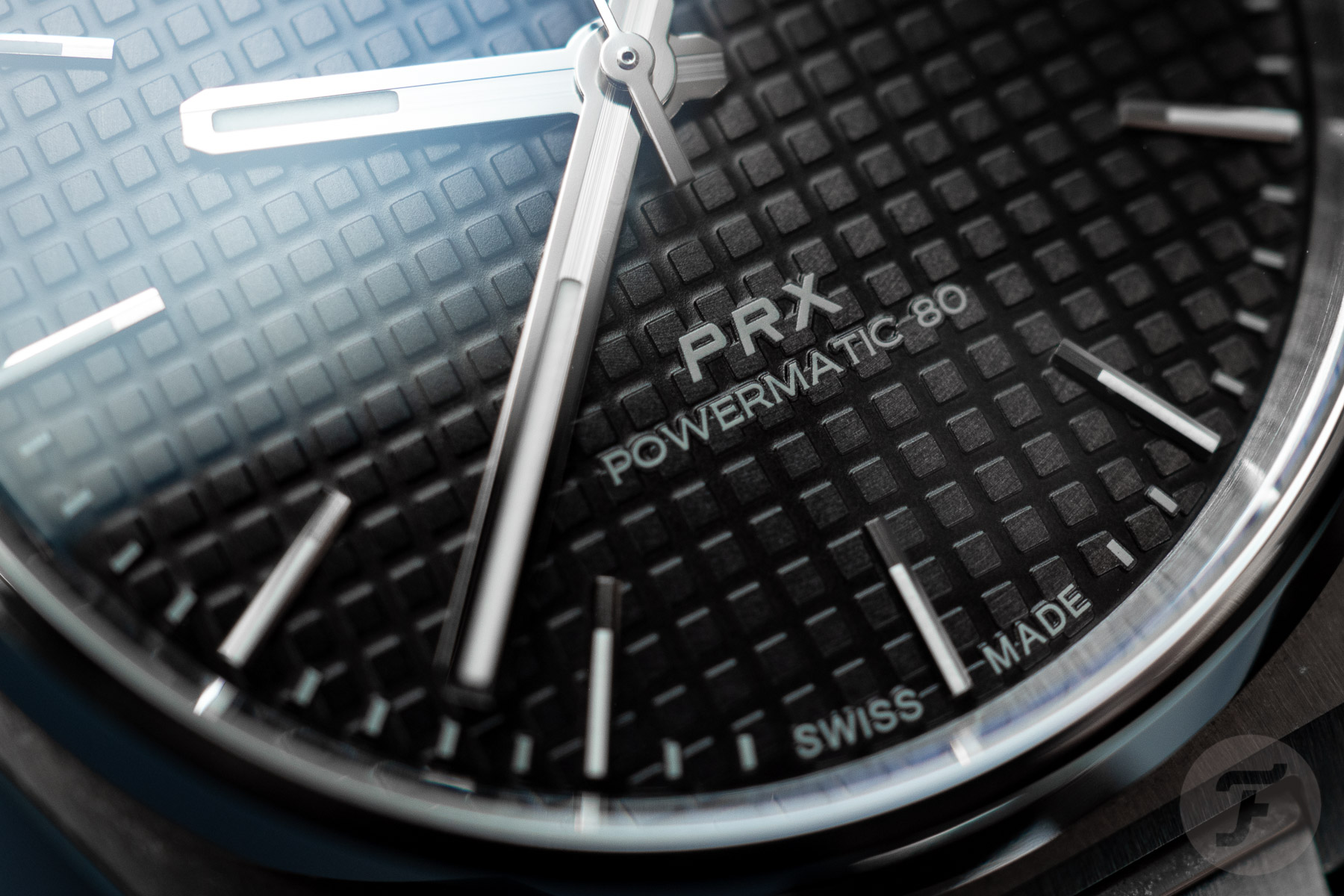 The last detail is the typography used for the “PRX” lettering. At first glance, the ’70s-inspired font doesn’t seem to match the other text on the dial. But soon, this quirky detail stands out as a reminder of the brilliant watch that you are wearing. Okay, I lied; there is one more detail to mention. The black dial has a slight shimmer to it that took me a little while to get used to. But it didn’t take long before I started appreciating it for bringing the dial to life. While a matte black dial would have likely been my first choice, this shiny option turns out to be a great one. It’s these little details that are the icing on the cake of an already impressive timepiece. It shows that the Tissot PRX Powermatic 80 has been created with a great eye for detail. 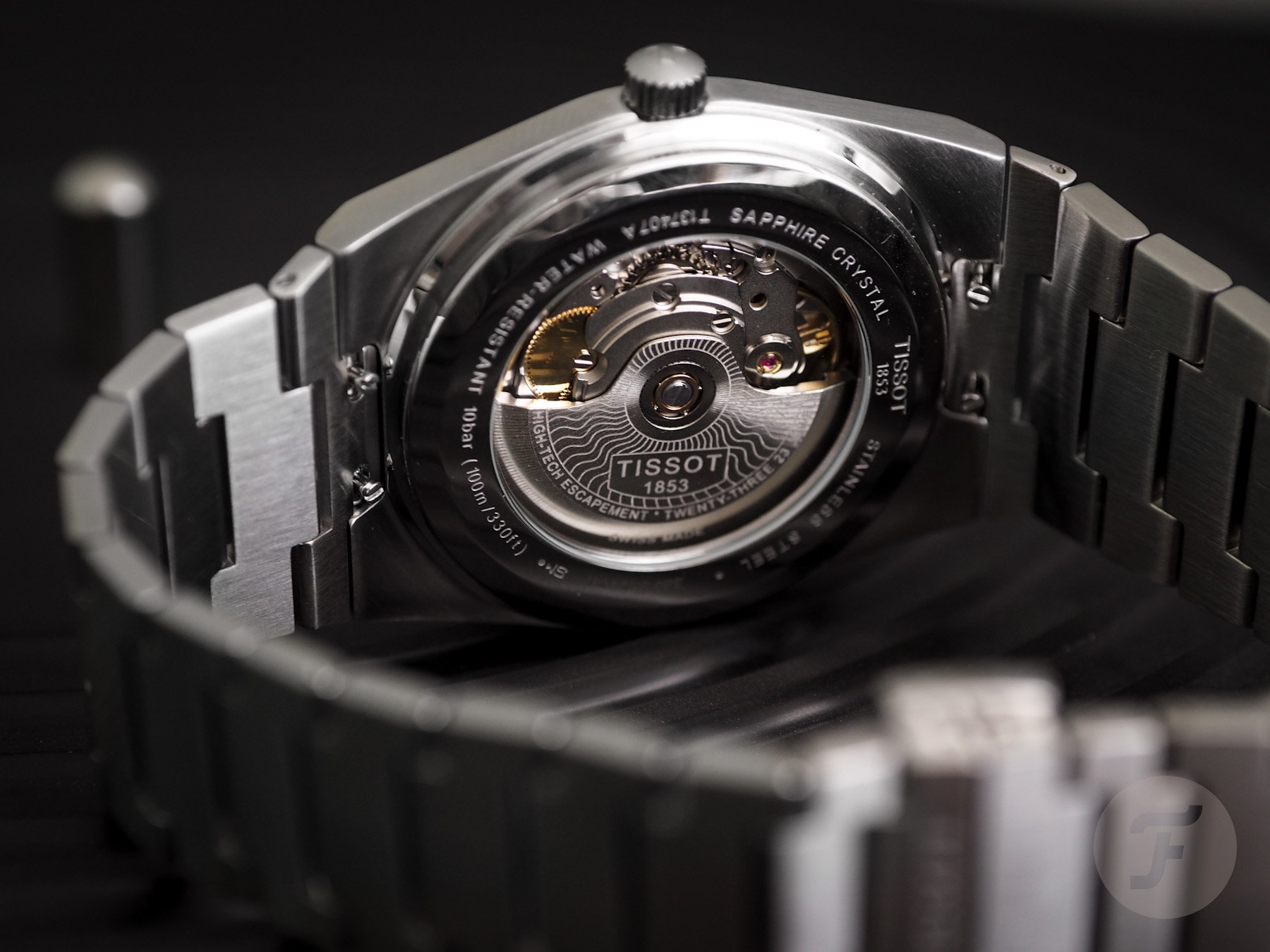 As the name already suggests, the watch is equipped with Swatch Group’s Powermatic 80 movement, which is visible through the display case back. As Lex explained in his review, the automatic movement operates at 21,600vph, has 23 jewels, and provides 80 hours of power reserve. The 80-hour power reserve is a great feature as I did not have to set the time once in four weeks. I had expected to have to do it after the beach trip, but as it turned out, in the evenings, I took the Sumo off and put the PRX on my wrist. 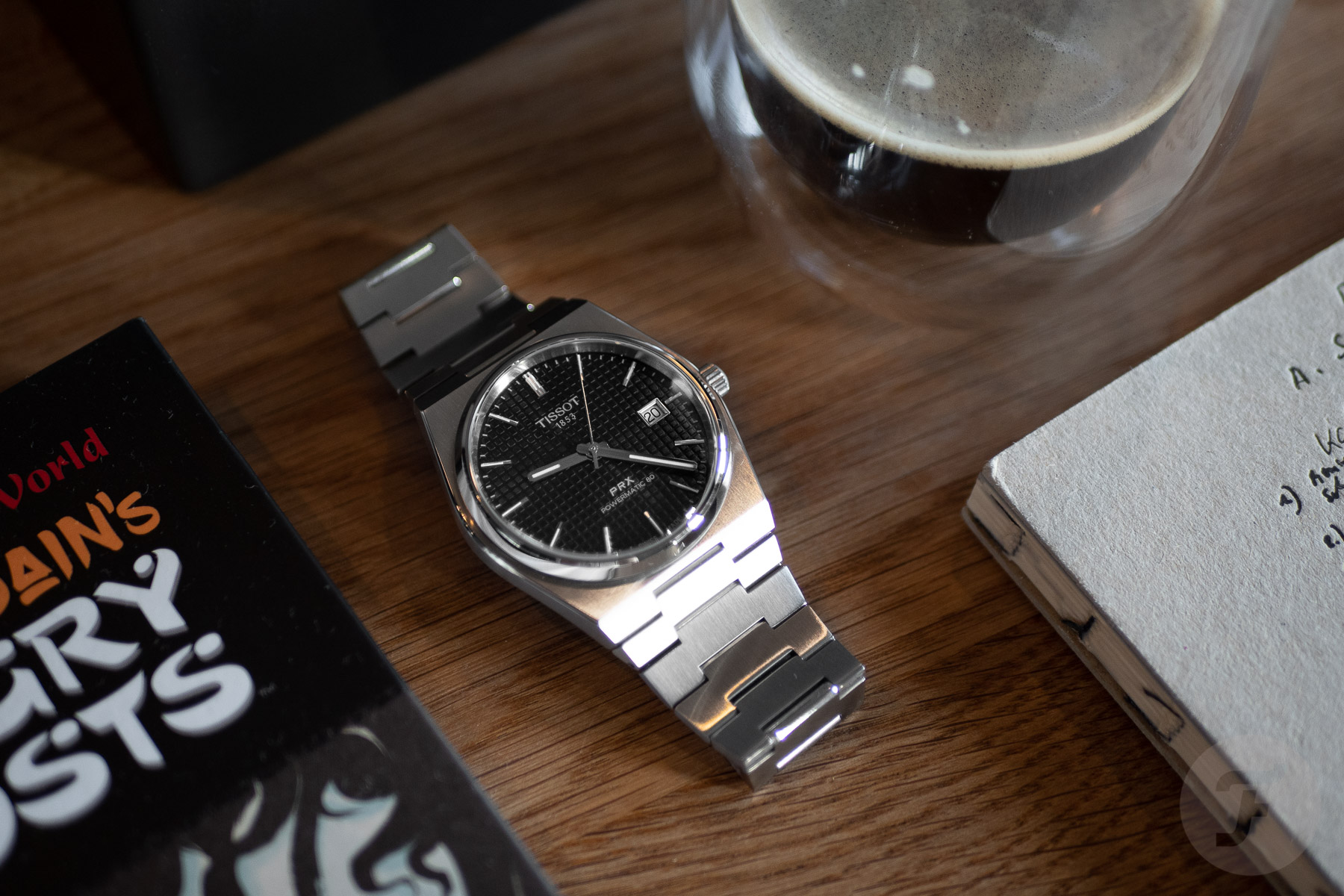 While the movement is not necessarily an attention magnet in terms of its looks, it proved to be very reliable. As I explained in the Sunday Morning Showdown, I haven’t actively measured the watch’s accuracy over long periods of time, but every time I checked it with digital timekeepers, it was performing great. I did notice that if I didn’t wear the watch for a longer period of time, it ended up running marginally slow. Having said that, it easily performed up to the brand’s given standard of ±15 seconds a day. 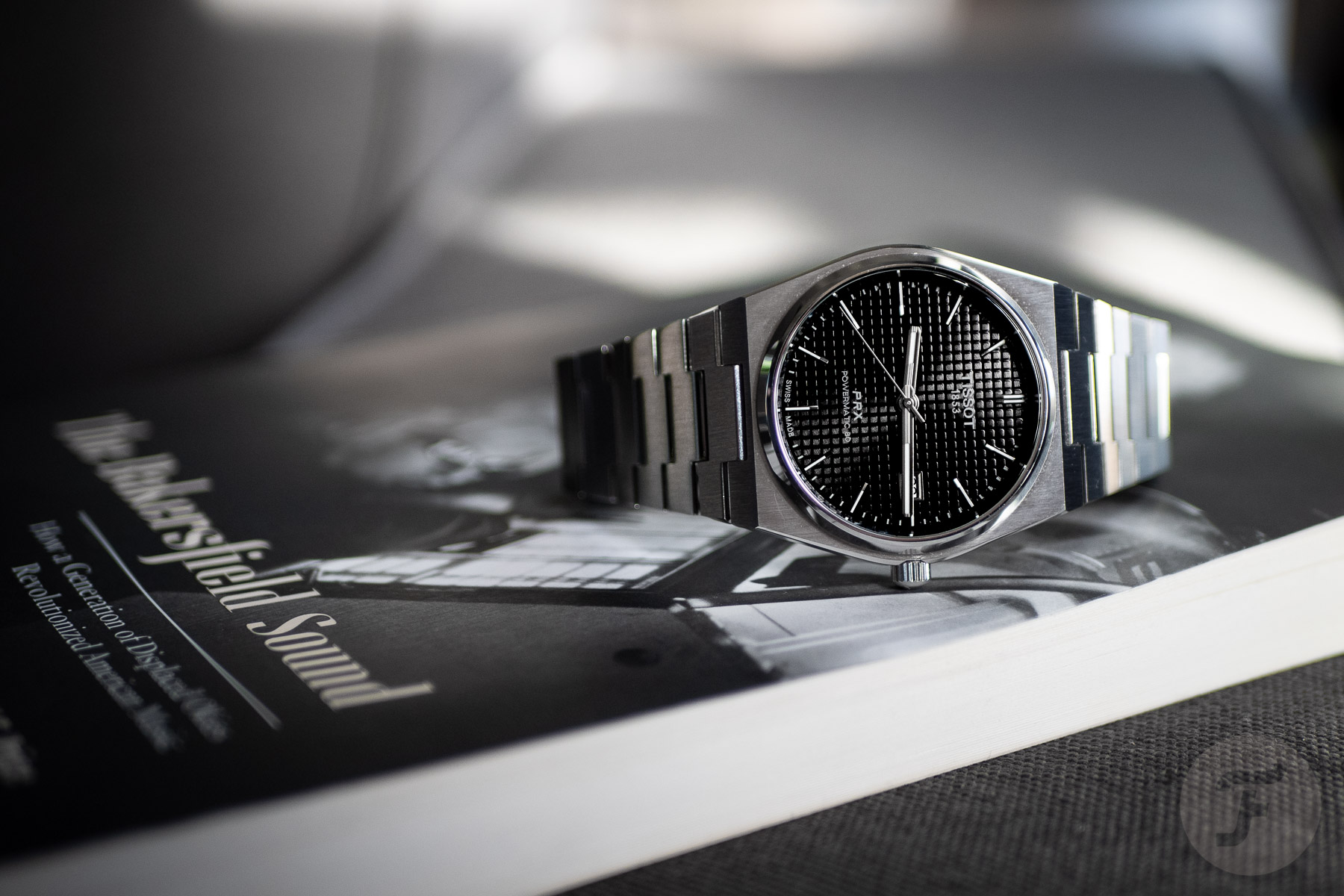 The true secret of the Tissot PRX Powermatic 80

In case you hadn’t guessed, after having worn my PRX for almost five weeks straight, I absolutely adore the watch. But while it is easy to try and pinpoint all the different elements that I adore so much, it is a lot harder to articulate the feeling I get when wearing the watch. The best way to explain it is that the PRX provides a truly luxurious experience. Every time I go out the door with the PRX on my wrist, it feels like I’m wearing a truly special timepiece. And that is exactly the feeling I want from the watches in my collection. It has even led me to ask myself not if but when I would want to add another version to my collection. Because the answer to the question of whether I’d want to is a definite “yes”. It is only a matter of time.

Do you own a Tissot PRX as well? If so, have you enjoyed it as much as I have? Let me know in the comments below.