A Vintage Rolex Submariner Ref. 6200 Is Up For Auction At Watch Collecting

We see Rolex watches go up for auction all the time. But it doesn’t happen that often that we see the legendary Rolex Submariner ref. 6200 go under the hammer. Live bidding for a 1954 Rolex Submariner ref. 6200 is currently underway at the English auction website Watch Collecting. With the auction ending today, the highest bid is currently a little over 150K in British Pounds. It’s a remarkable figure because the Watch comes without a bezel insert or the original bracelet. Let’s have a closer look.

Whenever one of the first Rolex Submariner references comes up for sale, it’s usually big news within the watch bubble we live in. When a Submariner ref. 6200 shows up; that’s even more special. Submariner fans know the story of the ref. 6204 as the first Submariner released to the public in 1953. Only a year later, Rolex released the ref. 6204. It is believed that Rolex only produced around 300 pieces of this reference. Only a few survived the last roughly seven decades, so that’s why this auction at the relatively new auction platform watchcollecting.com is so special. 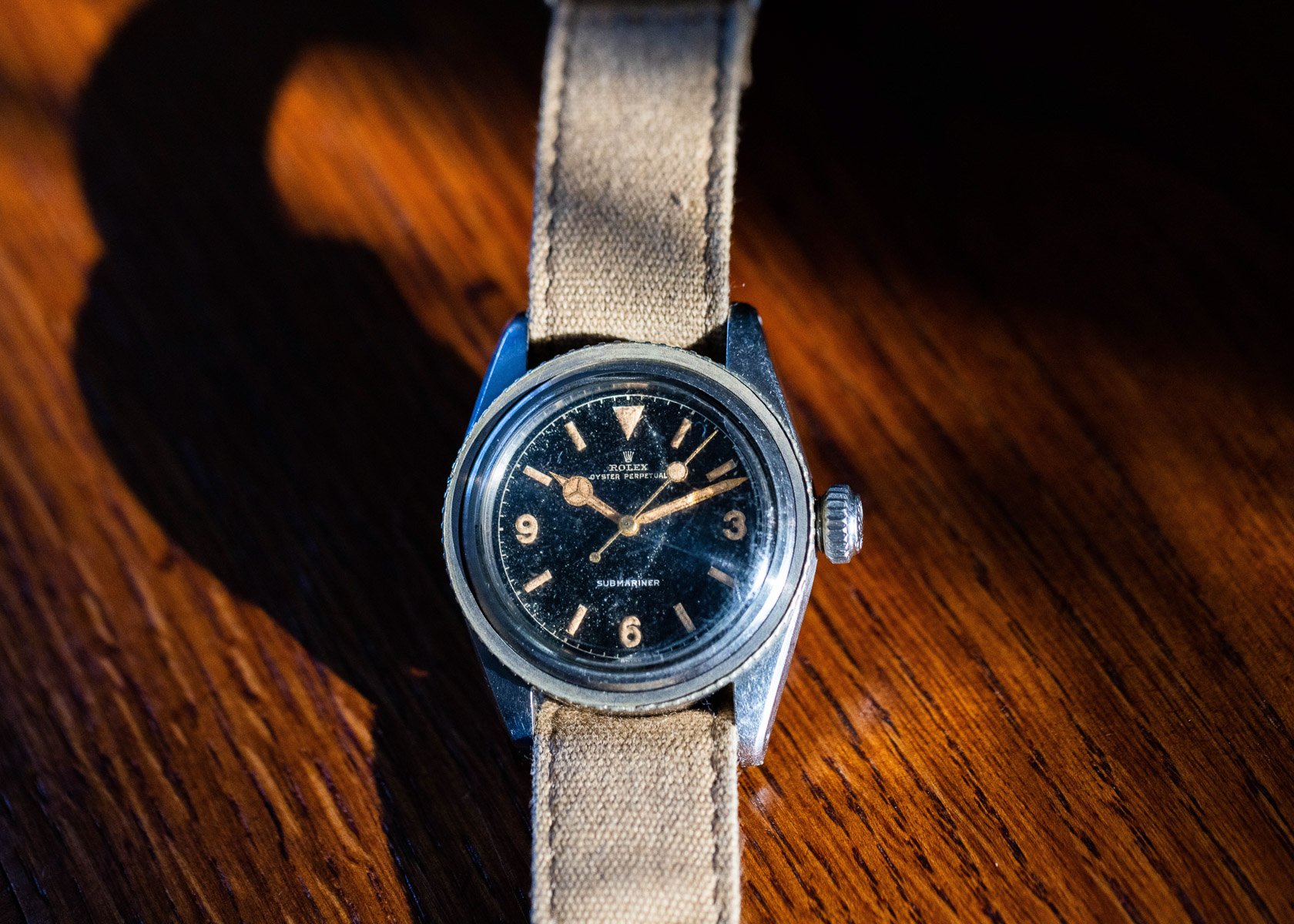 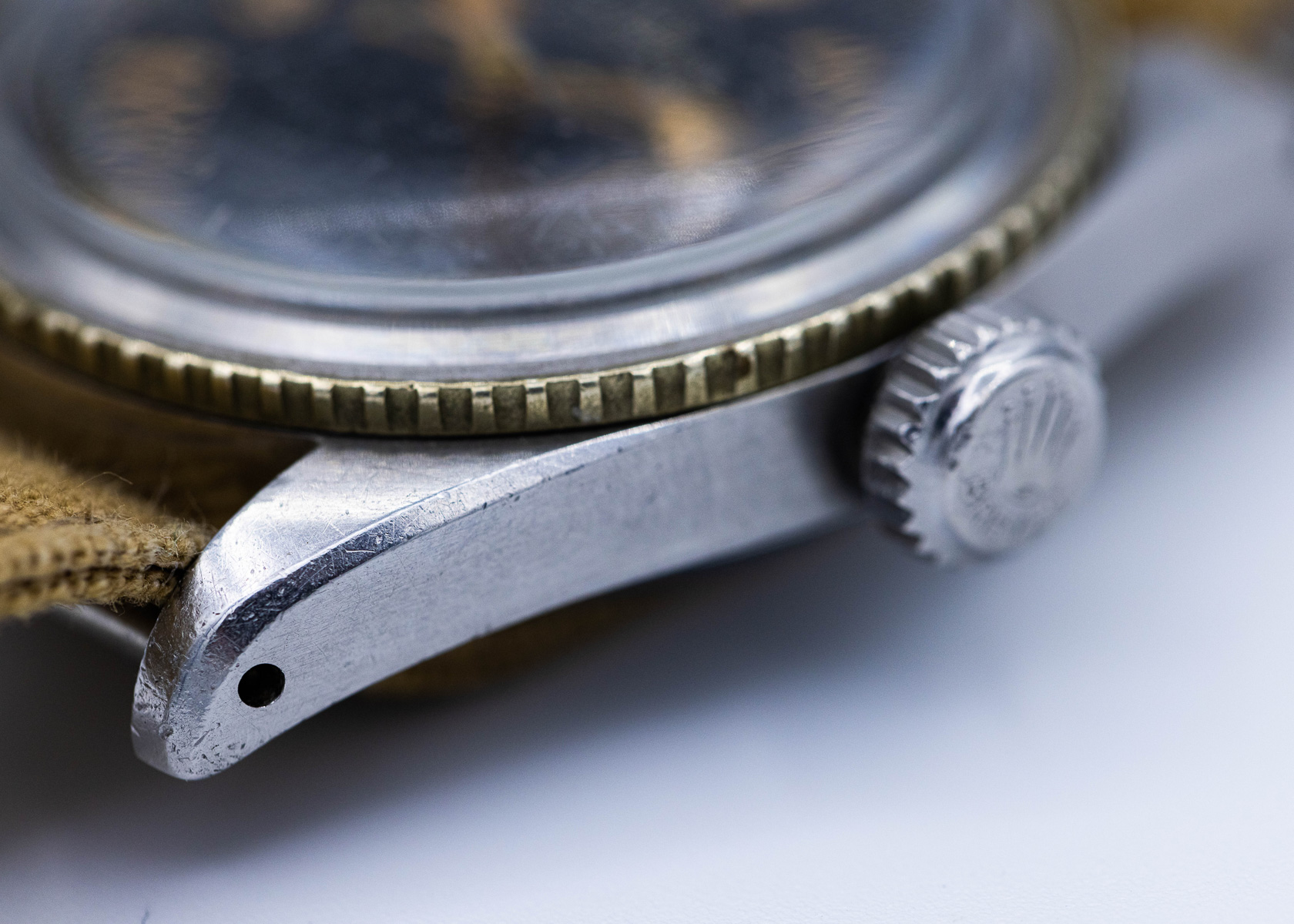 The Rolex Submariner ref. 6200 is often called the “King Sub” by collectors. The Watch is the first Submariner fitted with the 8mm “big crown” with the Brevet signature on it. It makes it the first of the so-called “Big Crown Submariners.” Additionally, it also introduced the Explorer dial to the Submariner. This famous dial layout with its 3-6-9 markers has become legendary, and the Submariner models that featured one are amongst the most sought-after Rolex watches in the world. Rolex would use the Explorer dial for the references 6538, 5510, 5512, and 5513. But this is the first reference that used it and connected it to the legendary Rolex Explorer. 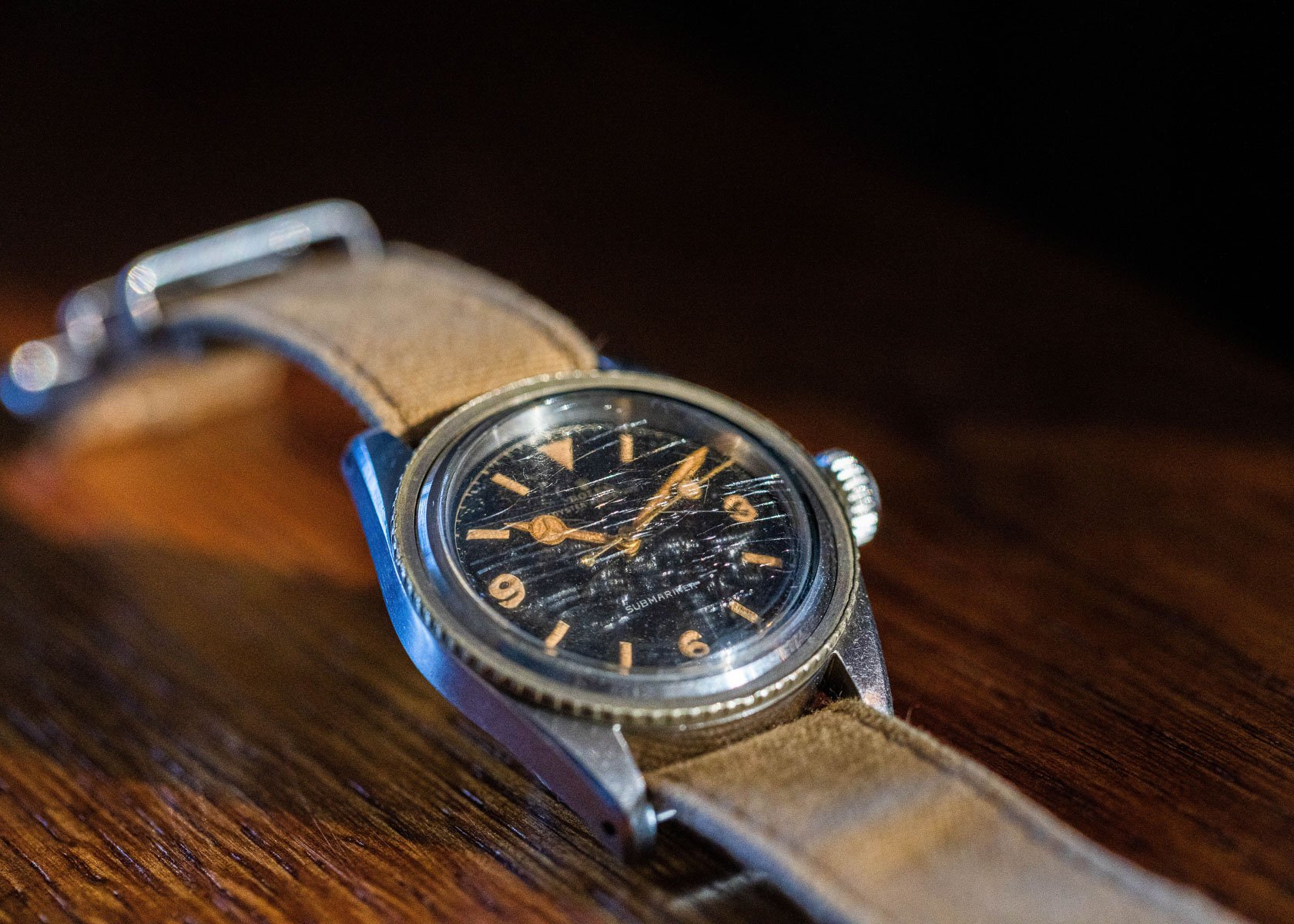 Despite only produced approximately 300 pieces of the ref. 6200, Rolex used different dial variations. The two main dial variants differ in layout, with some examples have the big logo and “Oyster Perpetual” text under 12 o’clock. Other examples have a smaller logo and text underneath. Of the roughly 300 pieces that were produced, the majority featured a large logo. Some dials featured the word “SUBMARINER” above the 6 o’clock position, while others did not. 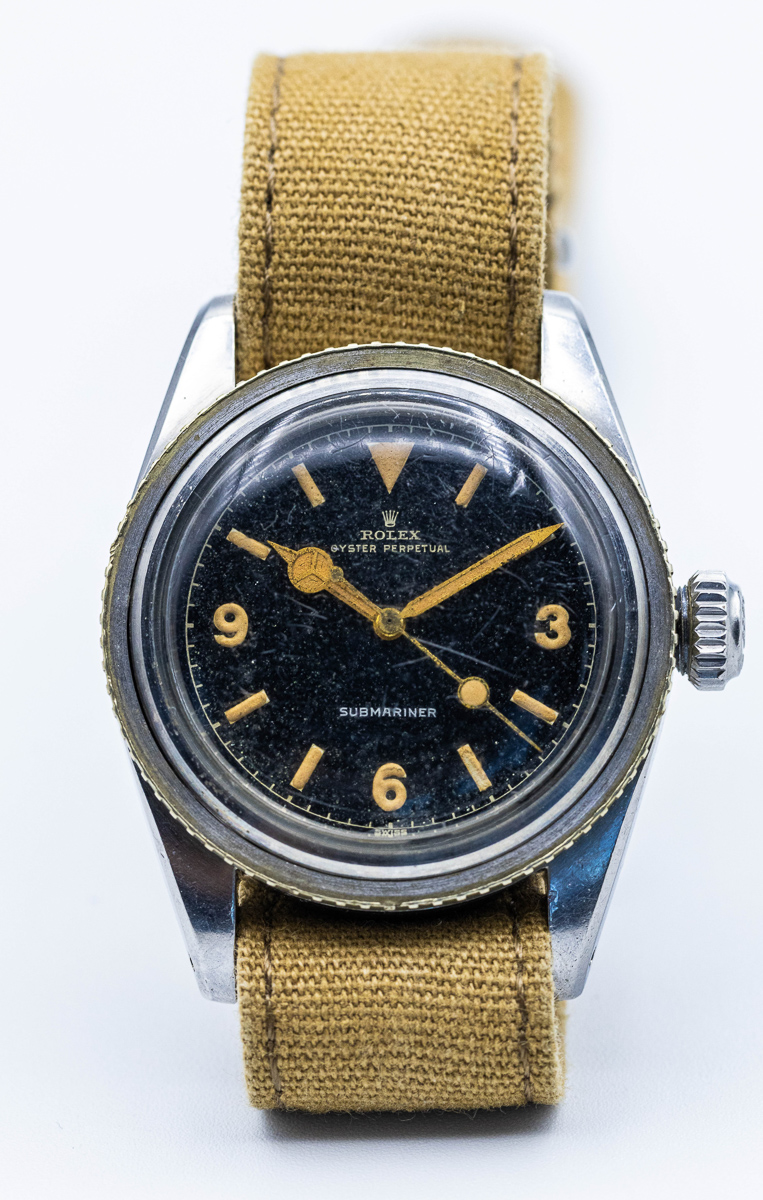 On top of the differences in dial and crown compared to the Rolex Submariner ref. 6204, the ref. 6200 also featured a different, thicker, and slightly broader case. Combined with the larger crown, it offered a water resistance of 200 meters. Inside the case, Rolex also used a different movement with the Caliber A296 compared to the Caliber A260 of the ref. 6204. Rolex used the movement because it was slightly bigger, which would fit better in the larger big crown case. Finally, the ref. 6200 was the first reference that introduced the Mercedes-style hands as the first ref. 6204 and 6205 featured pencil hands. Finally, the reference used a bezel insert without hash marks. 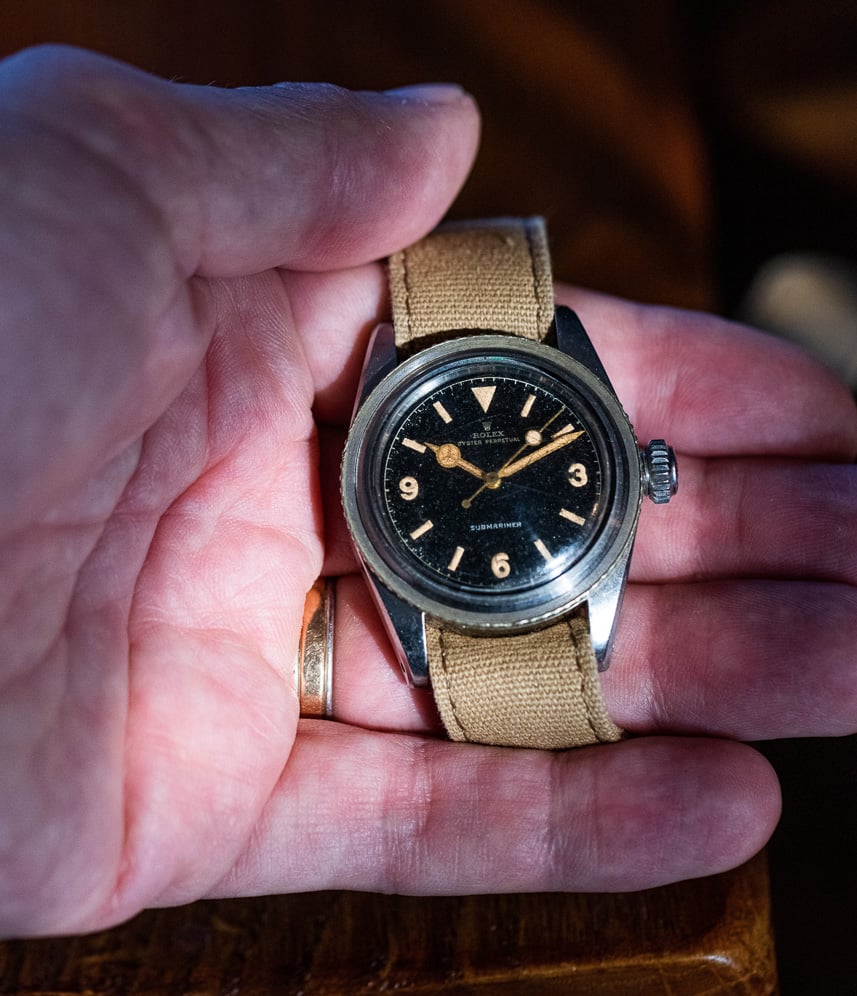 The Submariner up for auction at Watch Collecting

So with that out of the way, what do we have up for auction? The Rolex Submariner that is offered at Watch Collecting is a ref. 6200 from 1954 is a small logo dial version with the word “SUBMARINER” at 6 o’clock. The dial seems to be in great condition, with the radium aged to a nice light orange color. The black dial and the crystal have the typical ‘crazed’ effect from long-term exposure to the luminous radium. 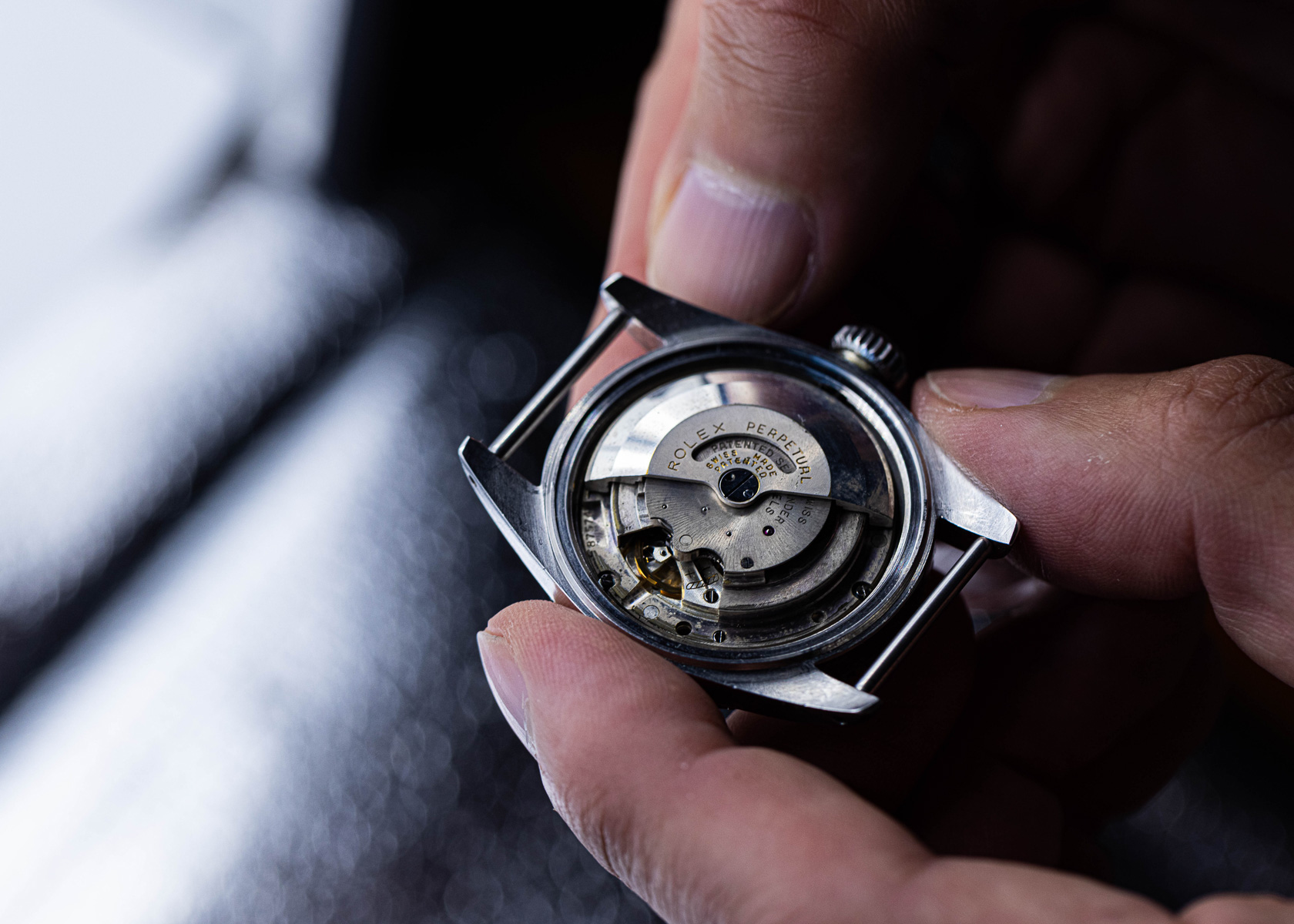 As you can see in the pictures, the Watch comes without the original bezel insert and the original bracelet. The bezel on the Watch still turns smoothly in both directions. The case also seems to be in good condition, with the original lines and bevels of the case still intact, indicating it was never polished. The case shows scratches and dents from use, as you would expect from a 67-year old watch. The serial and model numbers are clear between the lugs, and inside the case, the A296 movement looks clean and is in great working condition — although timekeeping has not been checked. 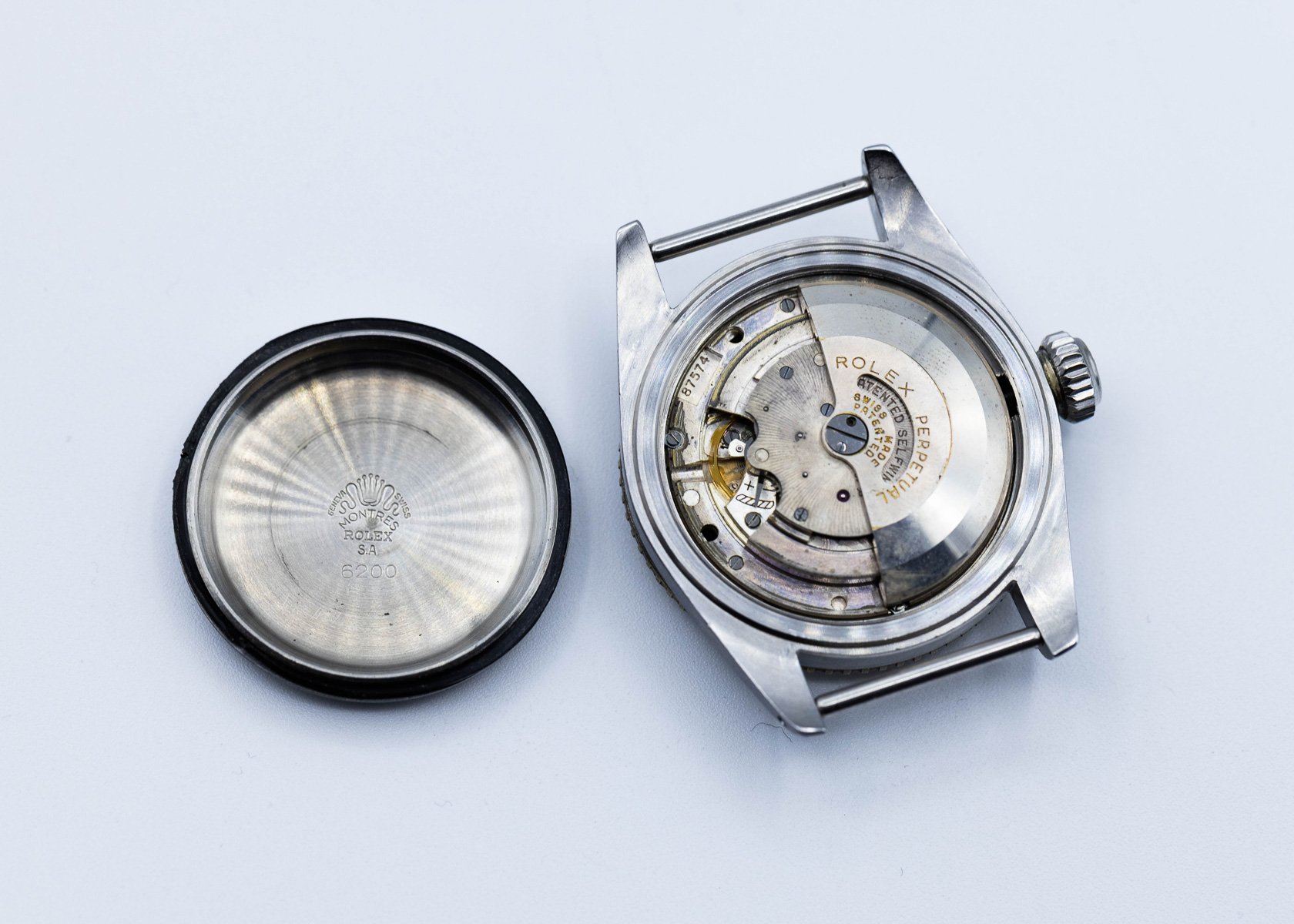 The story of this Submariner ref. 6200

There is not a whole lot known about the history of the Watch. As stated on the website: “This Watch comes from the niece of the original owner and was discovered in a box of his effects after he died. The original owner was a geologist by trade, working around the world in the oil industry. He did dive, but only as a hobby, so there is a strong possibility that it was used for its intended purpose as well as being a robust travel companion.” 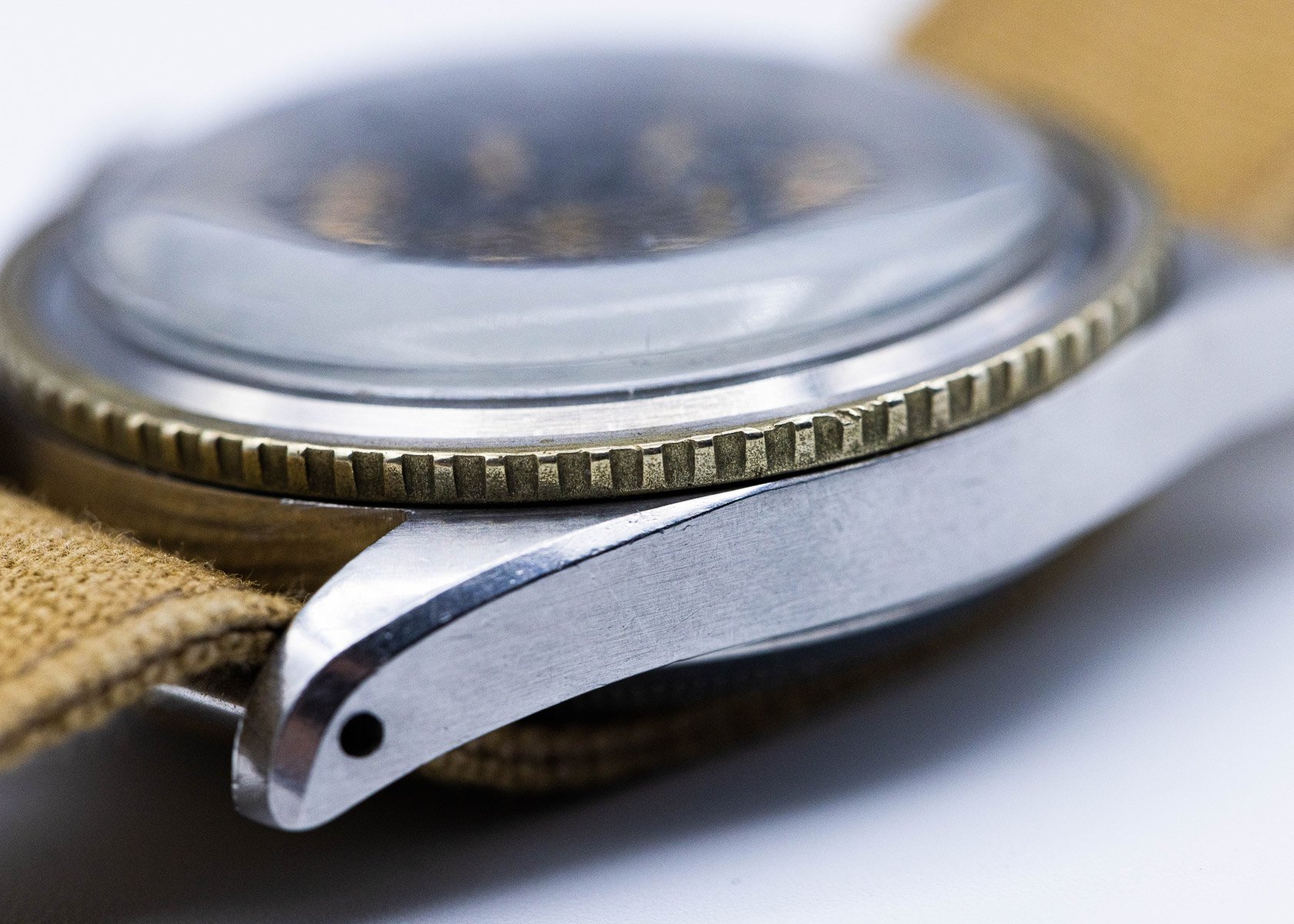 The Watch is offered without box and papers and is currently fitted to a contemporary cotton canvas pull-through strap. Bidding has been going on for the last couple of days, and the current bid for this unique Submariner is over £155,000, which is an incredible amount of money. Having said that, a great condition ref. 6200 was auctioned during the legendary Philips “Winning Icons” auction that also featured Paul Newman’s Daytona and sold for $579,000 back in 2017. 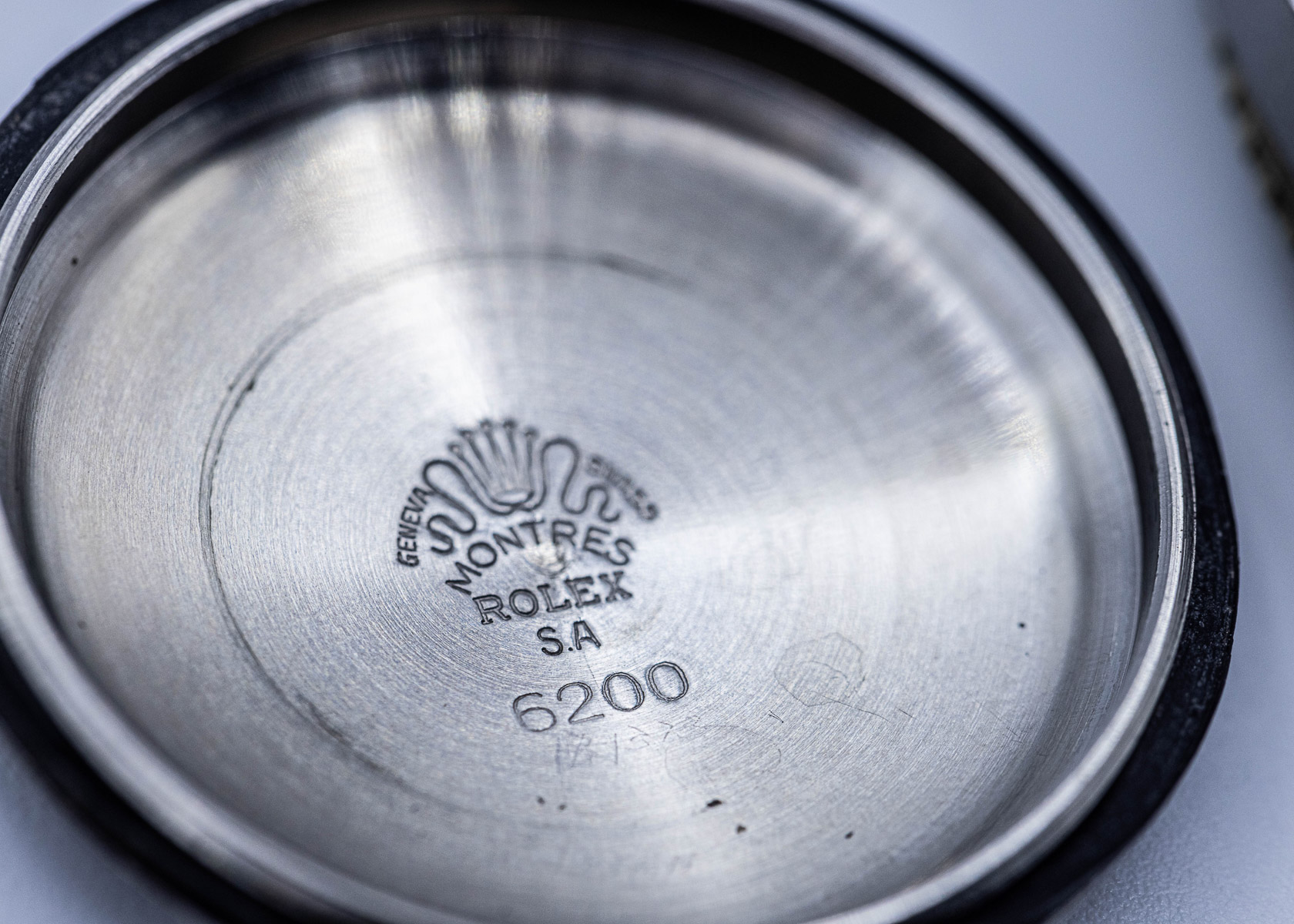 With only today to go, it will be interesting to see where this auction ends. On this final morning, the bids raised the price from £125,000 to £155,00, so we expect to see more action in the upcoming hours. It will be interesting to see the final bid for this unique piece once the auction ends at 16.30h CET or 3.30 PM GMT. What we do know already is that the highest bid is a new platform record for Watch Collecting for a unique timepiece.