Scratching The Itch For A Moonwatch With These Other Speedmasters

With the recent increase in the price for an Omega Speedmaster Professional Moonwatch ($6,400 / €7,100), your favorite watch might have gone out of reach. In the past, Omega had a wonderful solution for this — the Speedmaster Reduced. In this article, I’ll highlight this and some other alternative Speedmasters that you can pick up today for a lower price. 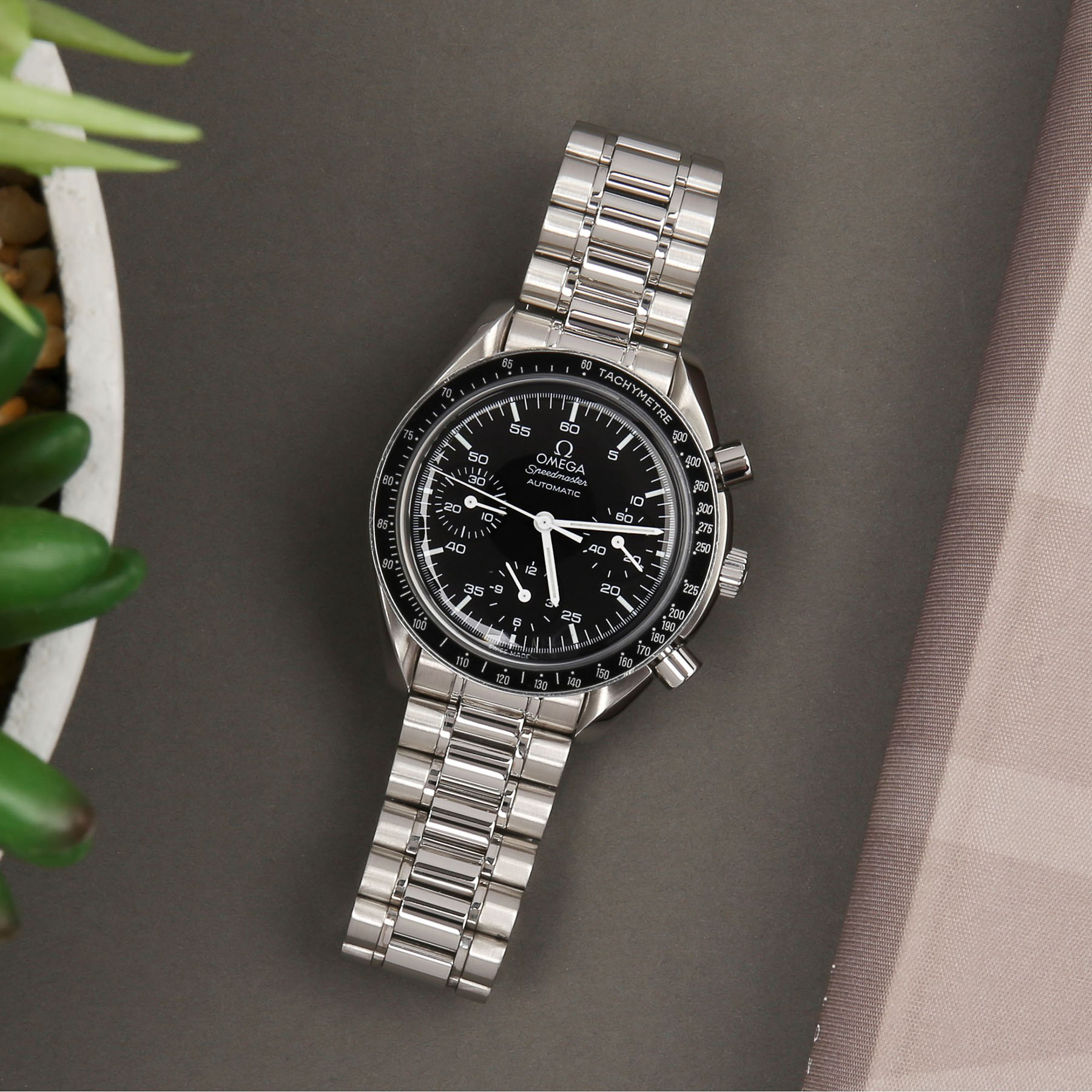 One of the main concerns of some of the older Speedmaster automatics was the “piggyback” movement. The chronograph was not integrated, but rather an add-on module (Dubois Dépraz 2020) on top of the base ETA 2892 caliber. These add-on modules have been discussed a lot on enthusiasts’ forums (like this one), where you will read some stories about them being expensive to service (or not at all). But Omega will service these movements and often replace the add-on module during a service. 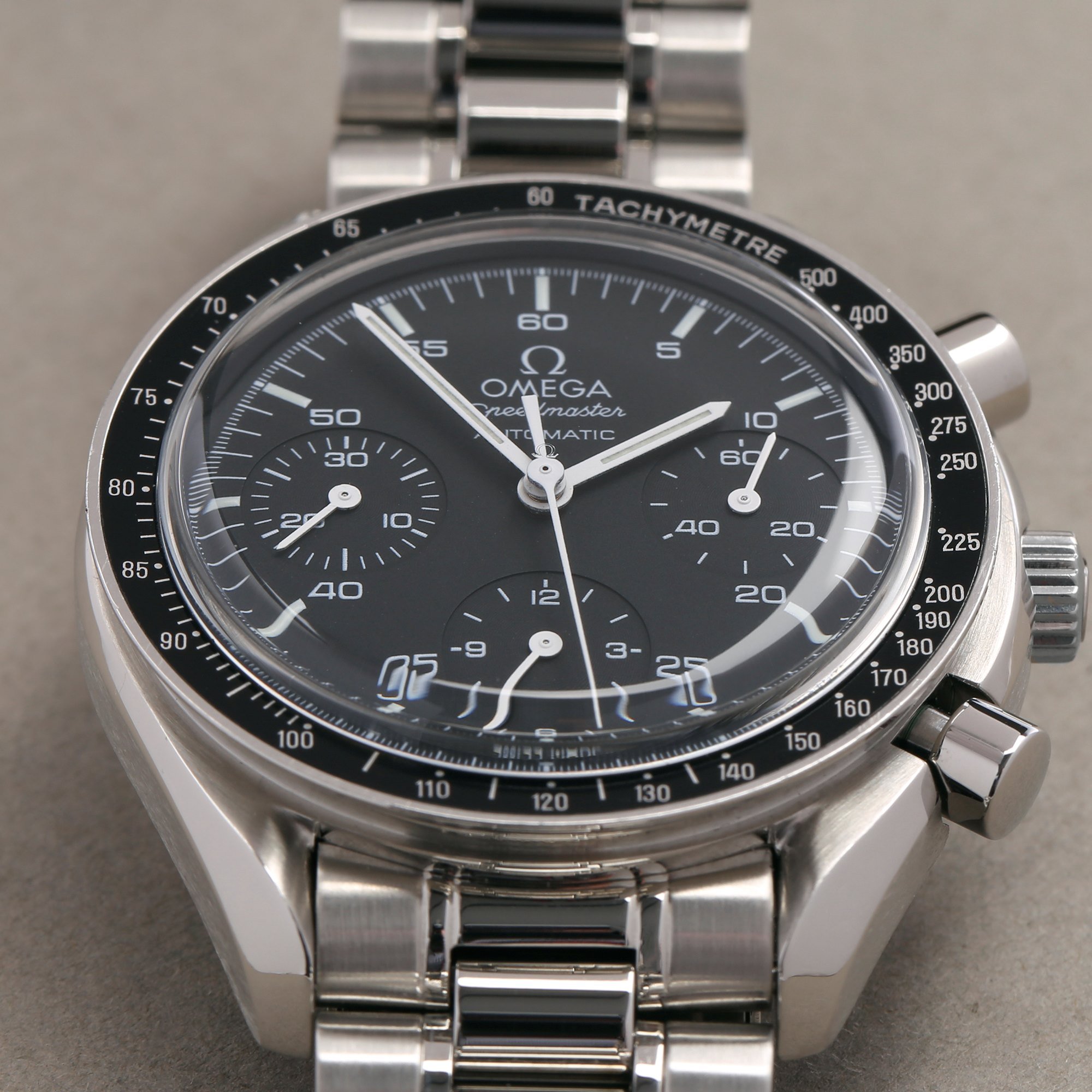 The Speedmaster Reduced was in production from 1988 till the early 2000s and used different Omega calibers (but always ETA 2892-based ones with an add-on module). You can only identify the movement inside by opening the case back to see it or by using the serial number. With the serial number, you can approximately determine the production year. Knowing the year of production, you can assume that the following movements were inside — caliber 1140 (1988–1995), caliber 1141 / 1143 (1996–1999); caliber 3220 (2000 and later). When there’s proof available of a service executed by an official Omega service center, the movement and add-on module should be fine. Some independent watchmakers avoid these piggyback movements by Dubois Dépraz, though. There are over 300 listings for the Speedmaster Reduced Chrono24, starting at $1,600 (without box and papers, offered from Japan). Take note of the additional import costs. 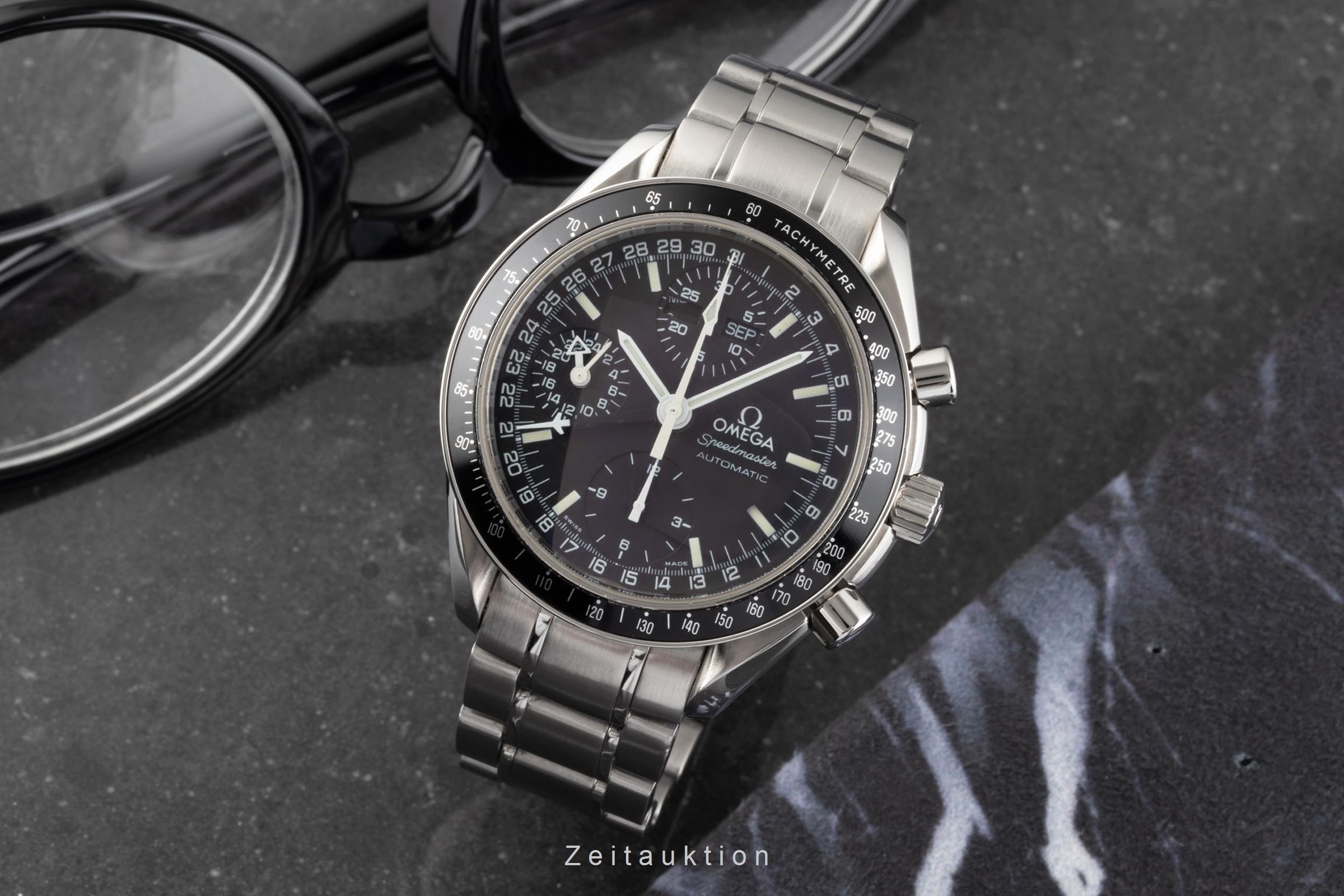 In the late 1990s, Omega added the Speedmaster Day-Date ref. 3520.50.00. This Speedmaster, also known as the Speedmaster Mk40, measured 39mm in diameter. Besides a black-and-white version, there was also one that used some colors on the dial, ref. 3820.53/3520.53 (we covered it here). The monochrome Omega Speedmaster Day-Date prices are similar to the Reduced 3510.50. Reference 3820.53/3520.53 is also an interesting watch, even though the prices went up quite a bit (starting around $3,000). Unlike the Reduced, this watch used a movement with an integrated chronograph mechanism. Omega’s caliber 1151 is based on the famous ETA/Valjoux 7750, which is easy to service and reliable. The Speedmaster Day-Date is a bit more cluttered than the Moonwatch, though, with its extra hands and apertures for the day and date. 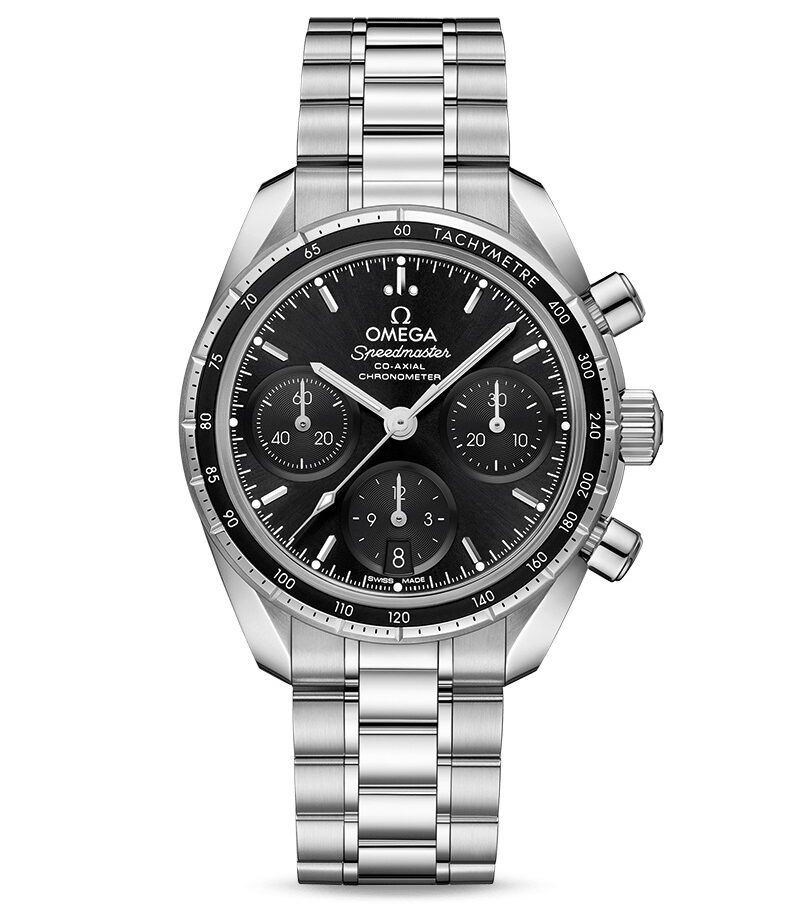 A worthy successor to the Speedmaster Reduced is the Speedmaster 38. It is often regarded as a ladies’ watch, especially the “Cappuccino” variation with brown and Sedna Gold elements or the light-blue-dialed version. The version closest to the Reduced and Moonwatch is the Speedmaster 38 ref. 324.30.38.50.01.001. This 38mm watch has Omega’s caliber 3330 inside. This movement has a Co-Axial escapement and a column wheel and has been chronometer-certified. This is not an in-house-developed movement but one based on the ETA A08.L01 with some important modifications specifically for Omega. The Speedmaster 38 is not only smaller and equipped with a column wheel and date indicator, but it’s also more water-resistant than the Moonwatch. Whereas the classic Moonwatch is only water resistant to 50 meters, the Speedmaster 38 has double the water resistance. This model is in the Omega catalog with a retail price of $5,100 / €5,600. 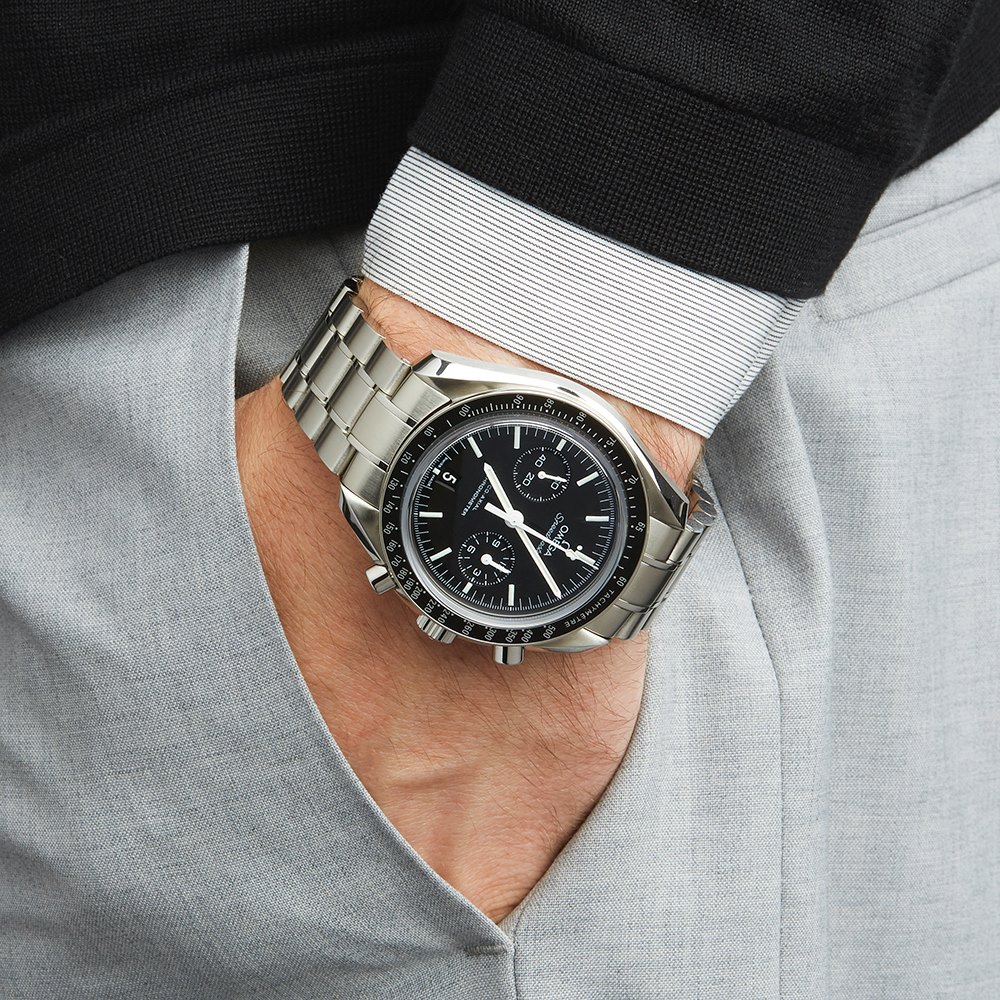 In 2011, Omega shocked many fans by introducing a 44.25mm version of the Speedmaster (and initially even calling it a Moonwatch) with a self-winding movement inside. This time, it was the in-house-developed caliber 9300 with a Co-Axial escapement and a column wheel. It’s the movement that Omega used two years later in the Speedmaster Dark Side of the Moon. In fact, the Dark Side of the Moon was the ceramic version of the steel Speedmaster Caliber 9300 ref. 311.30.44.51.01.002. Although the retail price was higher than that of the Speedmaster Professional (reference 3570.50), today’s price on the pre-owned market is lower. On Chrono24, you will find them starting at around $4,500. Keep in mind, though, that some asking prices are still much higher. You have to be a bit of luck finding a nicely priced Speedmaster Caliber 9300. 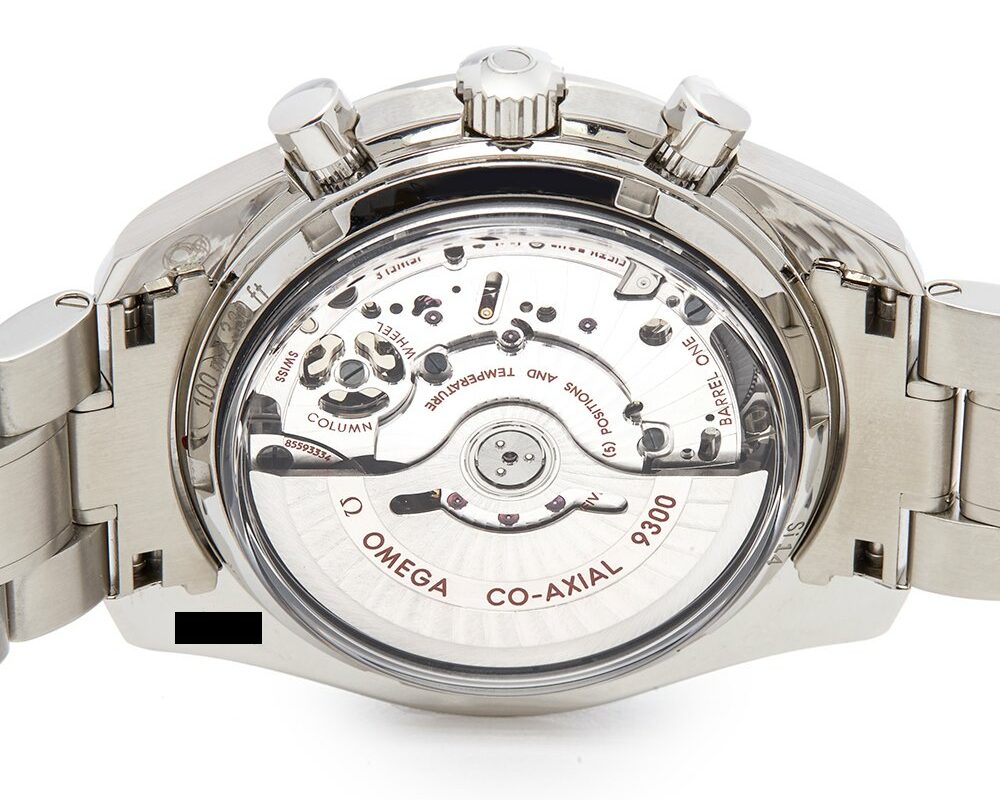 What I like about this particular watch, which I also wrote in my initial hands-on review in 2012, is that the case back has a domed sapphire crystal. Depending on the angle (I noticed it when I was holding my hand on the steering wheel) and the amount of daylight, you will sometimes find that the light seems to come from underneath the watch. It’s a neat effect. 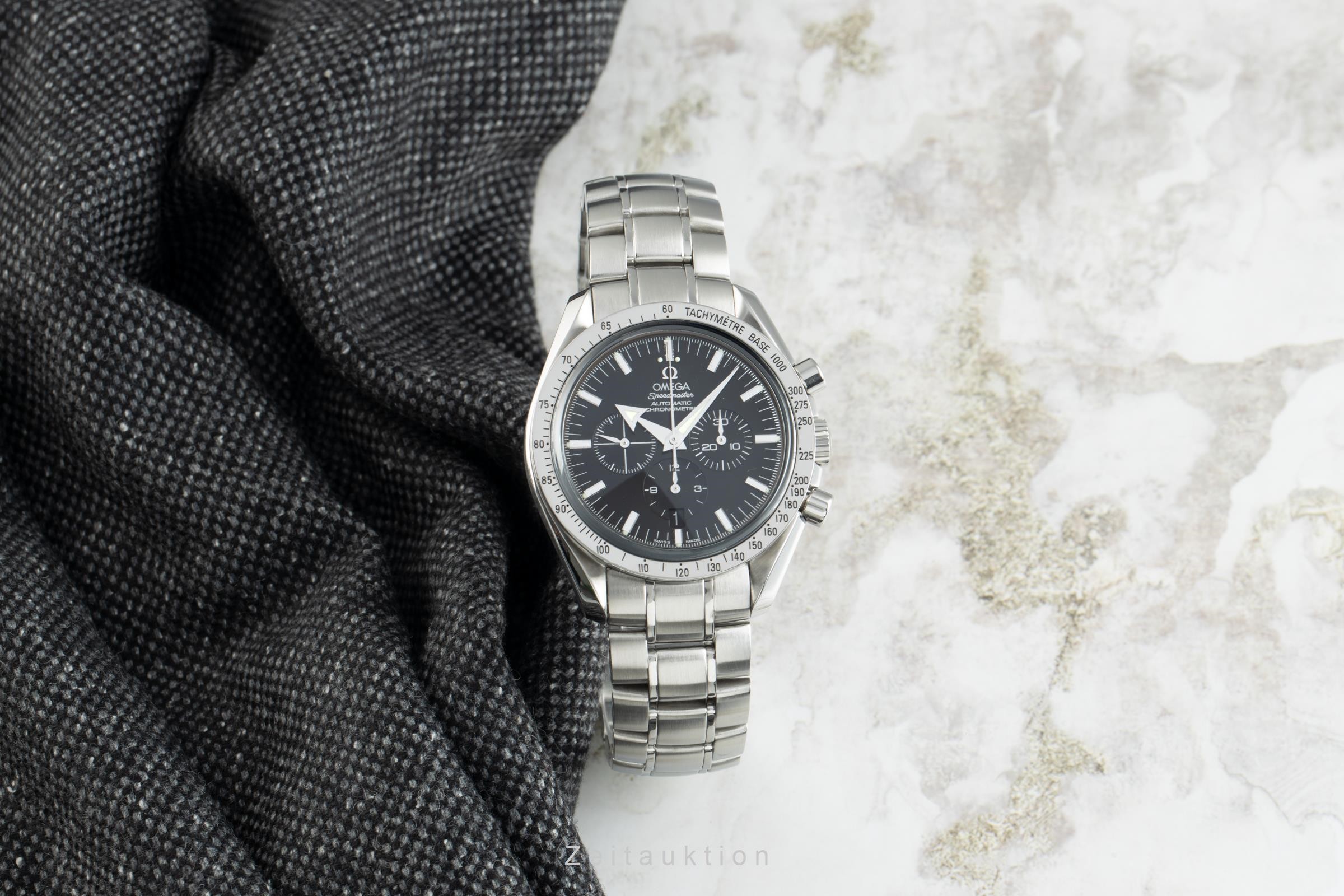 Some other Speedmasters might even scratch the itch for the Moonwatch. There are several variations on the Speedmaster Day-Date, but you will also find models like the Speedmaster Broad Arrow Automatic (3551.50.00) that look even more similar to the Moonwatch. The Speedmaster Broad Arrow Automatic comes with various dials, and all models are powered by caliber 3303. This movement is based on an F. Piguet (now Blancpain) chronograph with a column wheel. The 42mm case and bracelet are also similar to those of the Moonwatch, though not identical. These watches, introduced in the early 2000s, can be found for below $5,000.

Although there are more affordable Speedmaster alternatives that certainly all have their interesting characteristics, you need to consider if it will scratch that Moonwatch itch. If your eye is on the Speedmaster Professional Moonwatch, it is hard to be satisfied with something else, especially in the long term. Only the Speedmaster Reduced and Day-Date are available at very attractive prices. The other alternatives are close to the price of a pre-owned Speedmaster Moonwatch 3570.50.

Have you found any other Speedmasters that scratch the Moonwatch itch for you? If so, let us know in the comments.