An Exclusive Hands-On With The New Yema Yachtingraf Bronze LE

A chronograph that loves the sun
Tomas Rosputinsky
comments 1
Share

My favorite detail is that the case seems to literally eat the crown and pushers. And more than anything, I‘m really curious to hear your opinion on the super-slim hands. I’ve been waiting to announce this release for a while and I’m happy to say that this vintage-inspired Yema Yachtingraf Bronze, perfectly balanced with strong black accents, is ready to hit the watch world.

Not even two weeks after I landed an original Yema Yachtingraf from the 1960s I got a message from Yema PR manager Vanessa Ke. You can only imagine the smile on my face when I spotted a prototype of the new Yachtingraf in bronze that Yema was working on. “What are your thoughts?“ asked Vanessa. “I need to get my hands on it ASAP and see it side by side with the OG Yachtingraf,“ I replied. Fast forward to today, here we are with an exclusive hands-on review of the new Yema Yachtingraf Bronze from a limited run of 200 pieces that will be officially launched today. 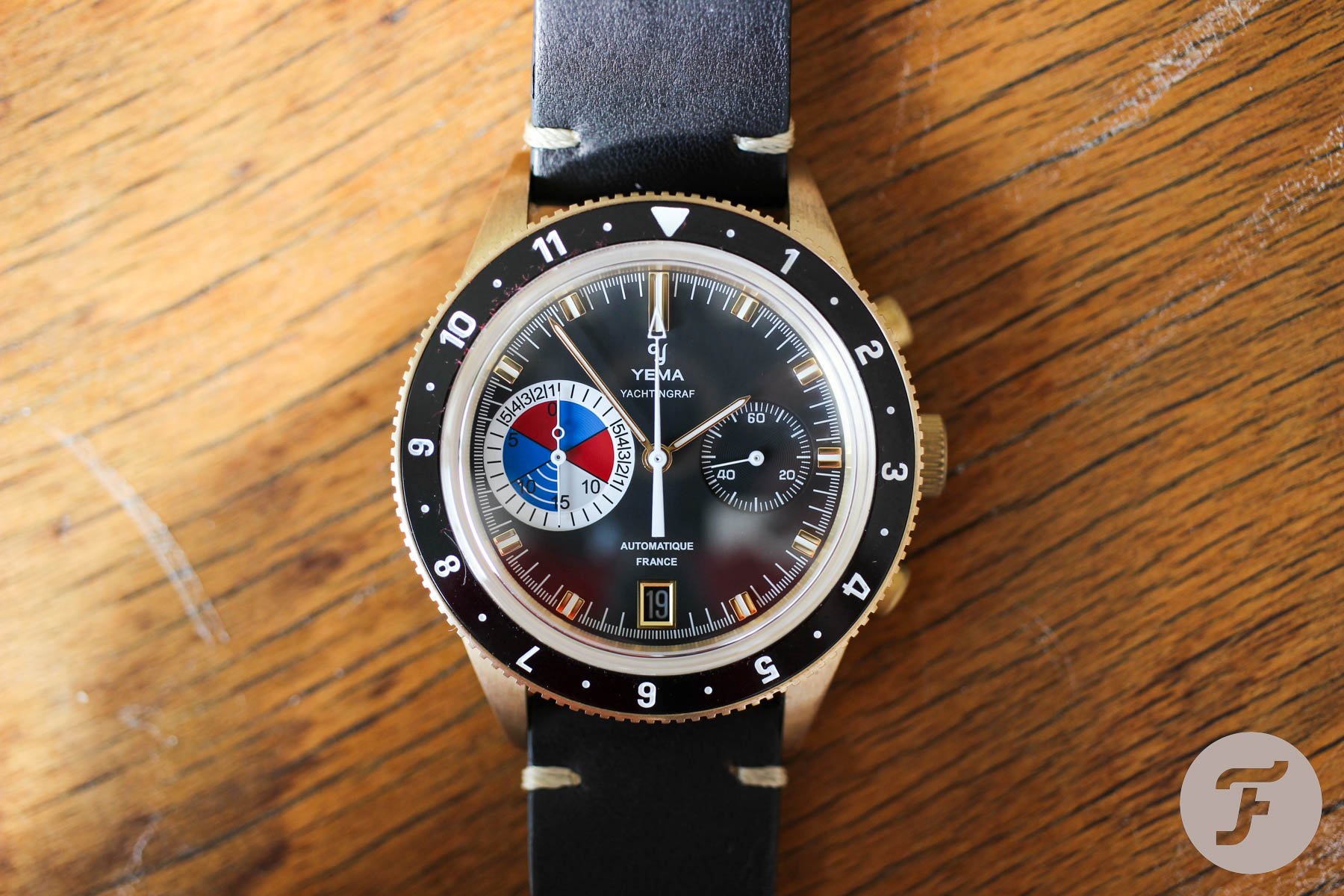 It’s been on my wrist for a week now and I have to say it’s amazing to see a bronze watch from Yema without a signature crown lock and a Superman name on it. Yema has quite a rich history with a competitive line-up of candidates to be presented in bronze. This time Yema chose the striking Yachtingraf as an inspiration. How does the vivid tri-color subregister look in bronze? Spectacular. Forget the vintage Yema Yachtingraf. The new Yema Yachtingraf Bronze is one hell of a modern watch with a big fat presence on your wrist.

It’s quite a big boy

The new Yema Yachtingraf Bronze is 16.15mm high, which is 3mm more than the original. You can both see and feel the mass rising from the 40mm diameter footprint. Despite the overall elegant design, hold off if you are looking for a slimmer dressy chronograph. The double domed sapphire crystal towers over the bezel giving the watch a more sporty profile. 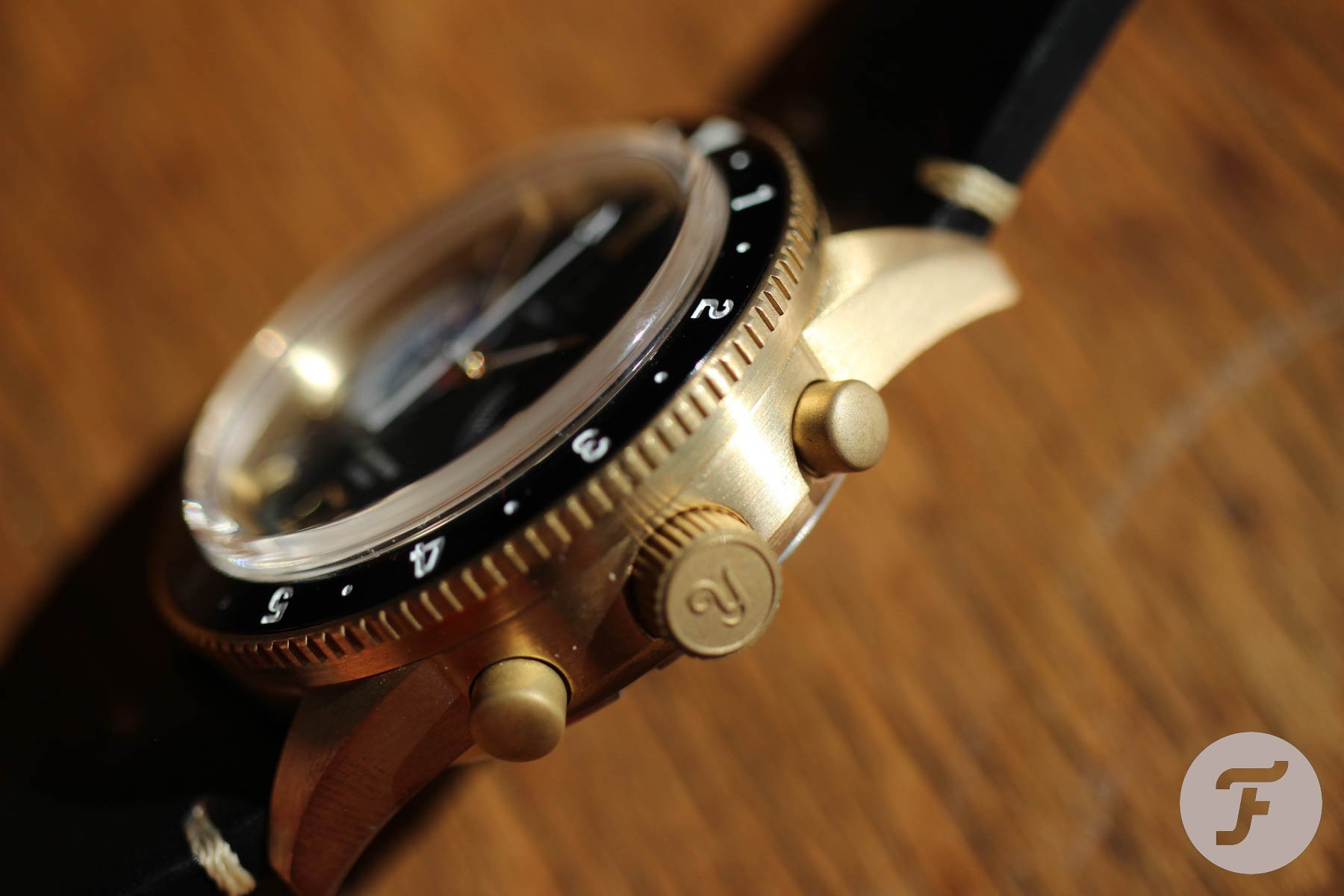 I am not a fan of cases that are too massive and high, but I didn’t mind this time. It’s probably the bronze, that gets more space to shine and thus softens the starker dimensional specs. The Yachtingraf case has no shiny areas, each bronze side is delicately brushed and ready to start collecting some patina.

When I take the Yachtingraf Bronze off the wrist, I like to put it on its side with the pushers and crown facing up. Typically, the pushers stand off the case, so you have a solid view of the tube they are sliding on. That’s what you’d expect to see, anyway. The new Yema Yachtingraf, however, has the pushers slightly recessed into the bronze case. If you press them, almost half of the pusher sinks in. The “chassis“ of the fully bronze crown is equally carved into the case. When looking at it from the side, I always had a conspicuous feeling that the pushers and crown are like a die-cast monolith. Thumbs up for the nice details.

The crown is not the most essential part of an automatic watch, especially if you plan to wear it as your daily beater. After giving it some thought I realized that the crown looks more vintage than the entire original 1960s Yema Yachtingraf. I don’t know if it’s just the bronze material, but the crown feels so raw under your fingers. Like it forgot to stop for a grinding procedure (that may be a slight exaggeration, but I wanted to viscerally communicate how brutal it feels — in a good way, however).

It’s definitely different than all the shiny polished benchmark steel crowns. It’s a tad sharper and has a slightly harsh look, but only in all the positive ways, you can imagine. I don’t remember a crown that offered such control under such a gentle grip. 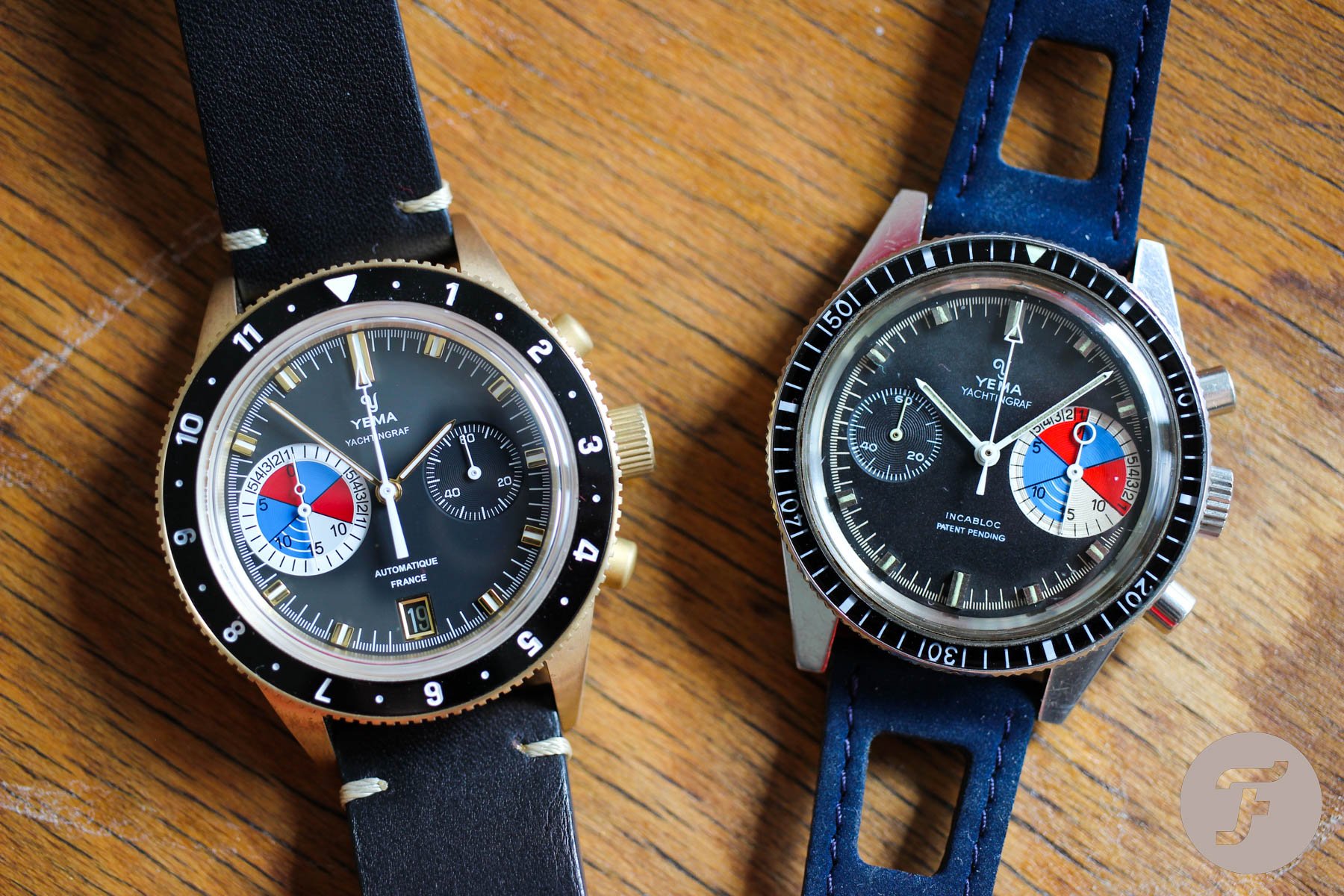 After a week, I came to the conclusion that too much bronze is not good. I realized it only thanks to the new Yema Yachtingraf, which counterbalances the bronze case extravaganza with an “adult“ dose of grounding black. The aluminum GMT bezel insert is lightly reflective and reads perfectly thanks to the contrasting numerals that are engraved and painted in white. When looking at it from the top, you can only see the lugs and teeth on the bezel in bronze. So it‘s not so much bronze that it would kill the rest of the design efforts. On the contrary, the color balance prevents the bronze from being too opulent. The bezel and the dial are so striking on their own that they steal enough attention. The bronze case comes as a second thought, “Wait, isn‘t there something else I see about the watch? Oh, that case color!“ 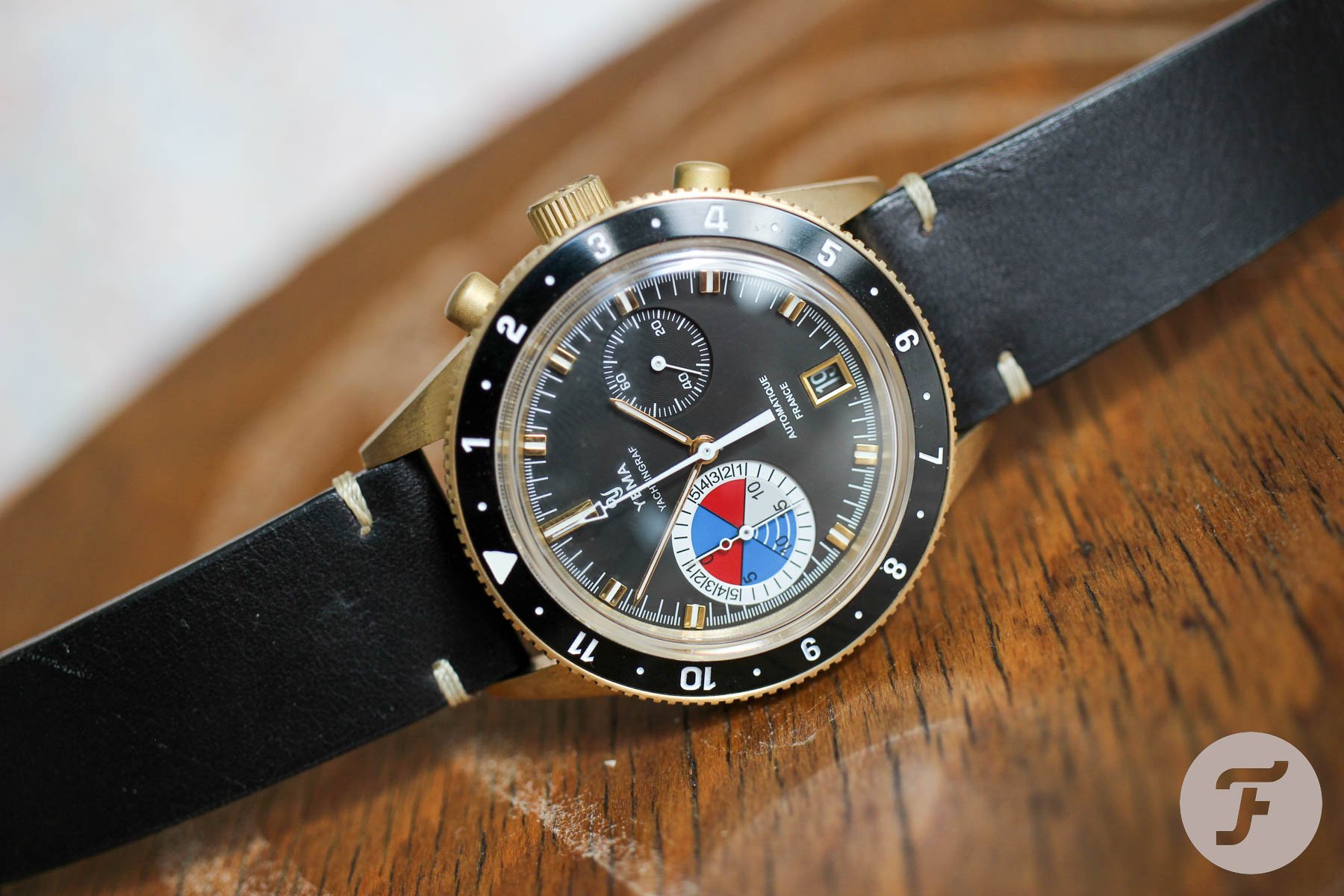 I styled the Yachtingraf on my photo desk and was ready to take two different shots in two different, yet natural color conditions with minimum post-production. I waited for quite some time to take these two pictures. The cloudy weather gives the case a cold-cool attitude. It looks almost pale. The moment the sunlight touches the Yachtingraf Bronze, it comes alive in unbelievably rich color tones. I just saw the press pictures Yema made and they reflect the reality. Well, there is not a single editor on this Earth that can tell you how exactly the Yachtingraf Bronze will look like in 50 years, but today I can tell you that hardly any steel case could warm your heart as much as bronze can. 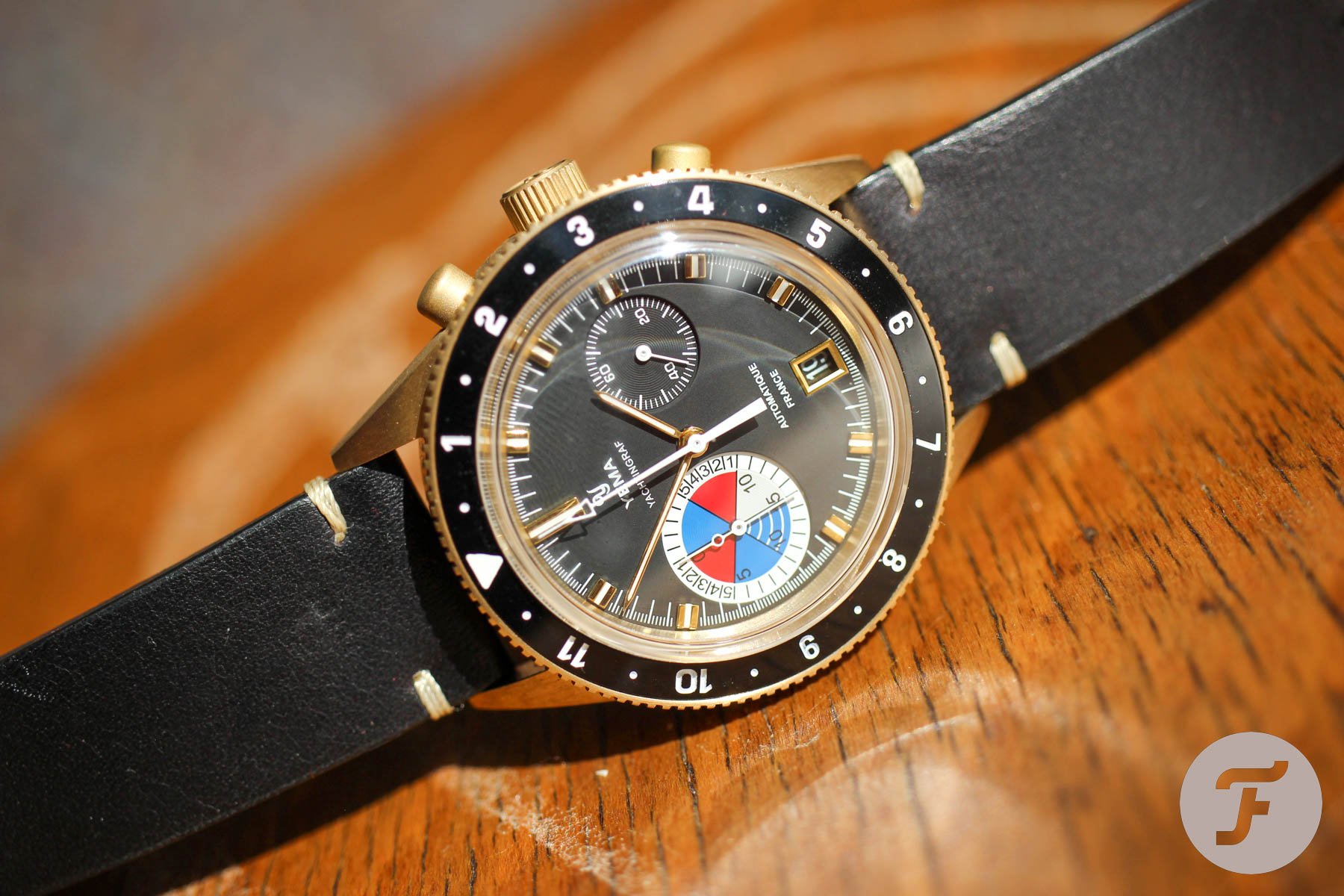 The matt black dial is crowned with golden hour markers. Gold also frames the rectangular date window that almost struggles to contain the double-digit numbers. I get that Yema didn’t want to have a circus-like dial, but I believe that a white-on-black date would be more legible. I also get the decision to keep it black so it blends with the dial, but in that case, I would skip the gold framing. I’m not sure what the result would be, but at least I would like to see it. Notice also how deeply the date disc sits. That detail I consider a feature, not a bug.

The design of the cult regatta countdown time stays almost identical to the one featured in the 1960s original Yachtingraf. As you can see in the side-by-side comparison, the OG comes with more saturated color tones. And with slightly better typography in my humble opinion. The most significant change is in the “needle“ hand, which comes with a considerably smaller “eye“. I would vote for the OG again, but as the Yachtingraf Bronze is not a re-edition, I guess it’s irrelevant. It just comes down to a matter of taste.

If there is one controversial detail you want to talk about in the original Yachtingraf, I would choose the hands. They are so thin that you don‘t know what keeps the lume in. Well, the OG hands are at least white and give contrast to the dial. Let’s switch to the new Yachtingraf Bronze. Here, despite the larger case diameter, the hands are even thinner! Furthermore, they are coated in gold. That polished gold surface catches the light and casts some very obvious reflections. Honestly, I first thought it was a joke and they are service hands meant to confuse me. 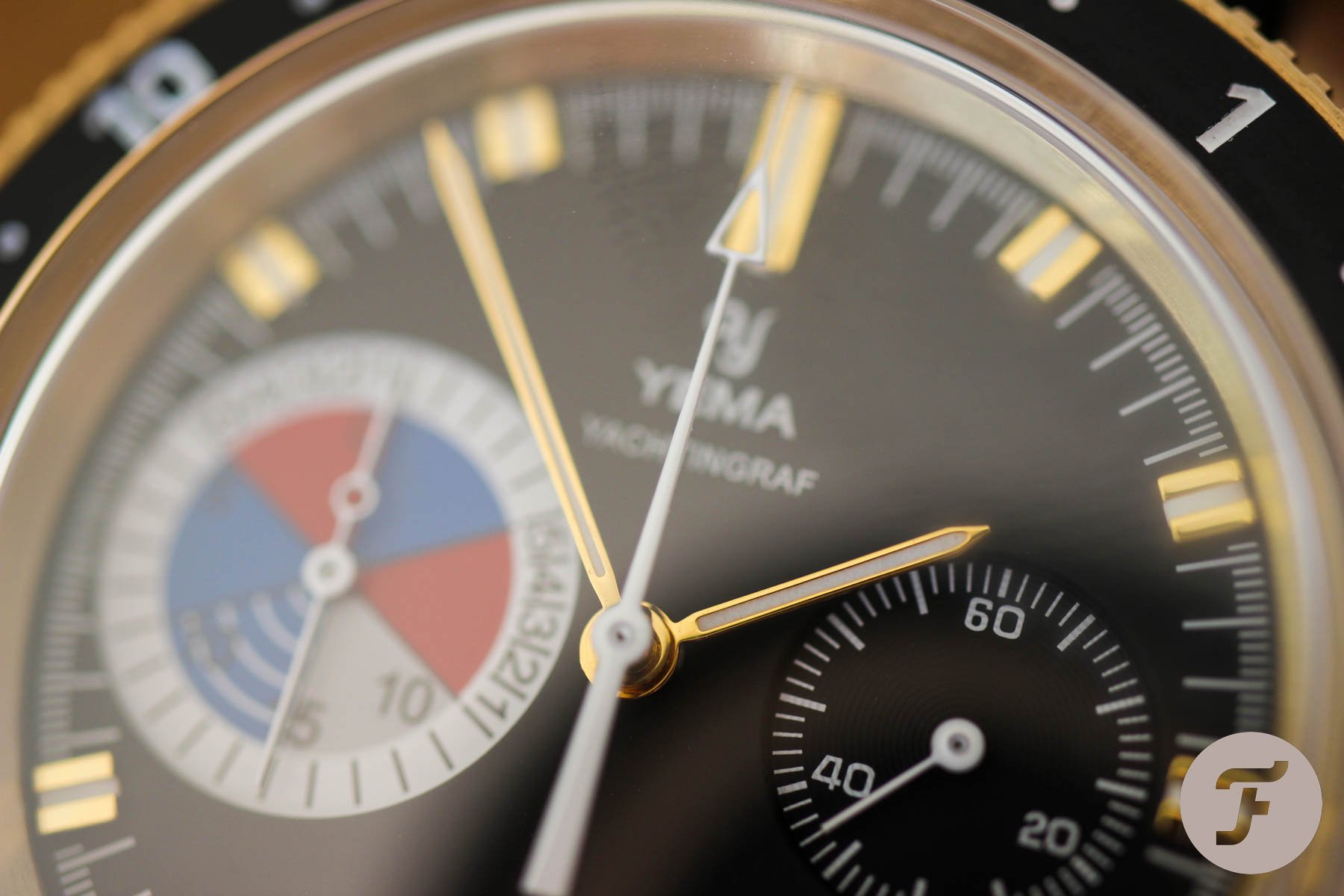 Well, I guess it’s supposed to be like that. And I would not even try to explain how long I’ve been thinking about it. It reminds me of many car designs I saw and I couldn’t get my head (and heart) around. Often I just needed time to consume, admire, and enjoy them. I am still 50/50 on the hands. I never had a problem reading the time so perhaps it is just an odd, internalized bias that tells me I need to see big fat hands dripping with lume when it comes to this design. I respect Yema for having the guts to roll with this design. I imagine it will have just as many fans as detractors. Feel free to share your thoughts in the comments below.

The Seiko NE86 movement is not an entire novelty, as Yema introduced it with its recent Yema Speedgraf chronograph. If you ask me, I would prefer the 34-jewel, 45h power reserve Seiko caliber instead of the boringly standard Sellita or ETA. The bottom line is, though, that movement is not a major factor when buying a €1,500 watch. What you get here is a pretty characterful mix of individualistic French heritage, material creativity, and modern re-interpretation. And all of that is limited to just 200 pieces. Don’t forget, the order rally starts soon.